Well decided Sunday was time to get back on my feet and out to them hills, after not walking since doing Conival and Ben More Assynt back in August and breaking my boots. Santa and my gf were good and got me some new ones for xmas though

So Achnafree it was as it was close by and thought would be nice walk to properly break my boots in and test some hill conditions out.

My friend decided that he was coming along on this one so i picked him up at around half 9 in Perth and after a quick stop at MC'Ds for some coffee we were off towards Crieff and soon enough at the Loch Turret car park. We were suited and booted in a couple of minutes and made our way along the track on the eastern side of the resevoir, took our time without a care in the world lol and stretched our legs.

The resevoir was still frozen although it did look like it had melted abit. Ben Chonzie in the distance was still heavily covered in snow from the looks of it and the summit was shrouded in cloud. We took the left fork in the track as we didnt fancy the track all the way to the top and part to do with Greame Dewer's report from last year

We didnt continue as far as Greame and headed up the slope pretty much where the map shows the track ending and where the burn is. reached the the summit fairly easily with no problems Mark at one of the cairns Me at one of the carins

We stopped here for around an hour for lunch and just enjoyed the views and peace. Was warm enough here with only a slight wind that chilled the hands. Only met a few other walkers while out although there were a fair few cars in the car park. One group of 5 came up as were were relaxing and chatted for a short while. Soon enough though it was time to get up and move though and we decided to head towards the landrover track and head down that way. Going was nice and easy from there onwards and we stopped to take in the view of the resevoir from on high with some lovely reflections. you can easily see the ice still there just under the water Reflections in the resevoir Followed the track all the way back the the car park after a nice day out and introduction back to the hills after my long abscence haha.

My boots were brill throughout and kept my feet warm and dry. They were getting a little sore by the end, but should be fine after another walk and once my feet get used to the stiffness compared to the softer boots iv worn the last year. My jacket was fab aswell, kept me warm without being too hot and with the little rain and 2 mins of snow we had on top I was still nice and dry. The I love the hood on it, keeps rain out perfectly and moves nicely with the head

Now were too next weekend? Back to the Munro's i think

Enjoyed your report and piccies

). nice to see you out and about. Get walking round perth and get them boots worn in. Then hit the munros.

Well done on getting out.

I was in this area last week - didn't see a thing

Hope your boots are fine

thanks for the comments guys and gals

and dont worry my boots are pretty much well worn in now, had them on out and about in Perth abit and after this walk i'll be back on the Munro's next weekend, might go up finish off the 2 of the west side of the drumochter pass that you done while i was up with you. see how the weather goes anyway lol

Of maybe 6 times i've been up that way, i've only had two days of bad weather (one of which was the time i did Chonzie in a freezing snowcloud), the rest of the time it's been blazing sunshine and blue skies.


I think i'll head up Achnafree next time i'm there. I've eyed it up a couple of times and it'll get me started on the Corbetts.

Hoping it's one of my lucky weather days rather than the cold, cloudy day you had Ross. 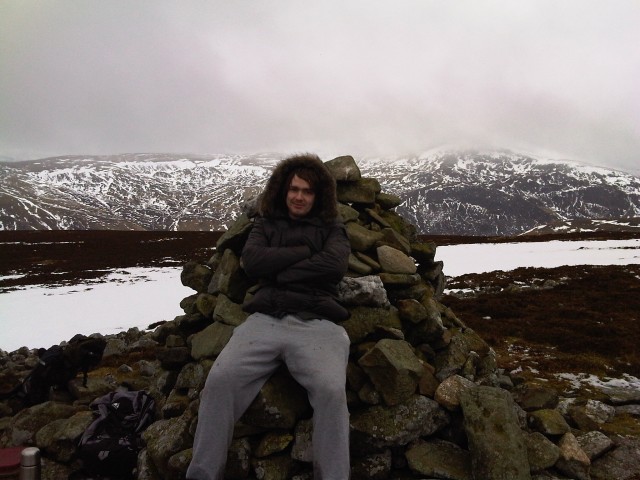 Hey nathan considering im only a stones throw away ive only been up that way twice and both have been fairly cloudy lol, still not seen chonzie without a cloud top

Yeah ive had my eye on it for a little while too seeing as it was so close, gets me away from just one corbett too though

hey Kinley its a fair old mop under the hood aswell

Good to see you back out there Ross. Cracking reflection shots -the loch looks like it's a mirror! Nice hairdo effect on that boy too.

I thought so too - excellent early to mid 1970s styling, or is it a furry hood? The lack of flared/Bell-bottom jeans made me decide it must be a furry hood. Just the thing for a chill wind.Of course I prefer to just hollow out a local wildlife specimen on the day...

Definitely a hill for the hit-list this year...

Hey Greame thanks for the comment
first time i got some reflection shots lol, usually the waters all over the place for me haha, just wish the ice had melted so you couldnt see it in the water so much.

Haha Caberfeidh yup def just a furry hood. we did spot a pair of white hares darting rapidly away from ourselves that i thought you could have mada rare old pair of boots from.