I had a four day pass from Sunday until Wednesday. It was the second week of the October fortnight and after having taken the first of those two weeks off, my wife was back at work for the second week. Both sets of grandparents were keen to have Ailsa for a few days during the second week so the scene was set for me to head to the hills. Plans were made with my Perth friends and occasional walking partners Bruce and John to do the two Eastern Mamores together on the Sunday before they both headed back south for work on the Monday. Those plans fell through on the Saturday but that didn't unduly affect my plans.

I got the car all packed up on the Saturday evening before settling down with Ailsa for an evening of Strictly Come Dancing, arguably the highlight of her week in the months running up to Christmas.Then it was an early night ready for an early start the following morning. The forecast suggested the better of the weather would be earlier on on Sunday with rain moving in later in the afternoon or evening, with some uncertainty as to exactly when. I was still planning on doing the two Far Eastern Mamores, Binnein Beag and Sgurr Eilde Mor, thus completing my Mamores Munros.

An uneventful drive north west had me in the Grey Mare's Tail car park in Kinlochleven and away for 8.15 and as usual, after a lengthy spell away from the hills (an outing on Ben Chonzie last week notwithstanding), it took me a wee while to warm up, both physically and mentally. The weather wasn't helping. The hues of autumnal oranges and browns in the landscape were lovely, but a rather sombre, grey sky lent itself to a generally downbeat feeling. Mam na Gualainn from the car park in Kinlochleven 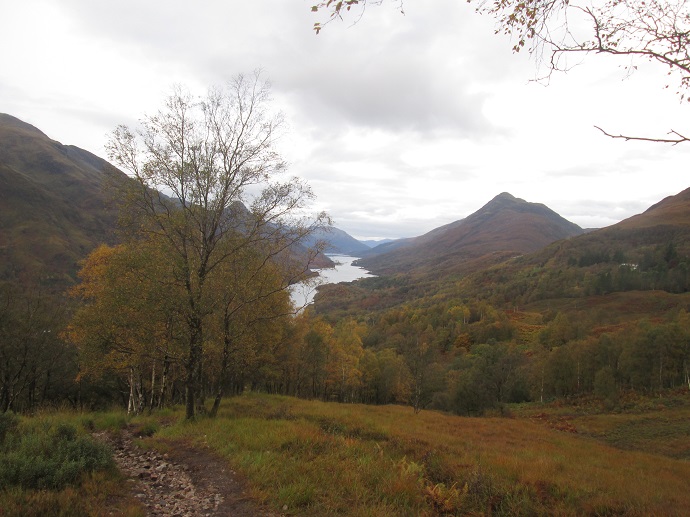 I remembered how badly eroded and rutted the sprawling path up through the woods is from having done it a few years back as part of a group of 9 that set off on the Saturday of the Kinlochleven meet to tackle Binnein Mor and Na Gruagaichean. I chuckled to myself as I recalled Sue (who on her maiden WH meet was one of the 9 that set off that morning but not one of the 5 who completed the route) telling me at the Ratagan meet only a couple of months ago that she turned back on the flanks of Sgurr Eilde Beag that day because she was convinced that hungover and sleep deprived from the previous night and in unusually wintery conditions for early November, anyone who carried on up to the summits would most likely become a statistic by the end of the day!

Fortunately for the 5 of us that completed the route that day (and the 4 that bailed early and returned to the hostel in Kinlochleven), that did not happen, and fortunately today too, the path soon leveled out and became less eroded and rutted as it climbed over the flanks of Meall an Doire Dharaich and approached the Loch Eilde Mor track. 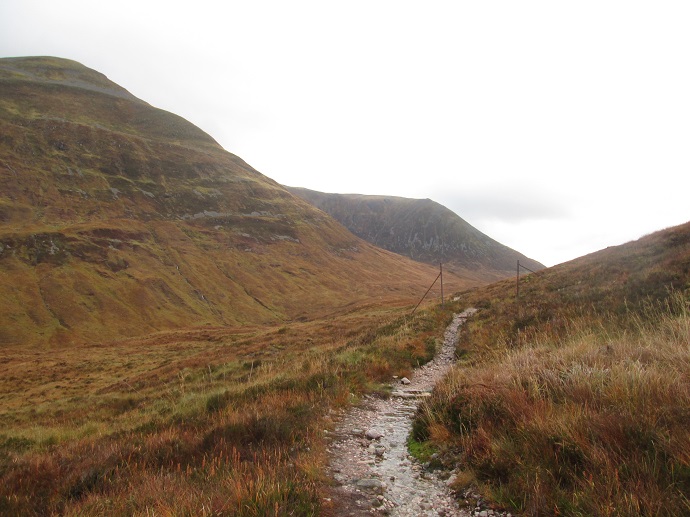 I executed the sharp dog leg on the track before cutting back onto the path that contours the flanks of Sgor Eilde Beag and gradually climbs up towards Coire an Lochain. Loch Eilde Mor was now dominating the foreground off to my right with the Blackwater reservoir and dam visible beyond. The generally murky and sombre views extended out over Rannoch Moor and across the mountains of Glencoe behind my right shoulder. Garbh Bheinn and the Aonach Eagach from the flanks of Sgorr Eilde Beag, the ends of Loch Eilde Mor and Loch Leven just visible

I ignored the left turn that leads down into Coire an Bhinnein and then onto the long pull up the other side to Binnein Beag and opted instead to skirt to the south of the lochan and up onto the southern flanks of Sgurr Eilde Mor. I wasn't too hopeful of a significant breakthrough in the weather but it did seem to be brightening up ever so slightly. Despite the general gloominess, and the fact that the tops looked set to be stubbornly shrouded for the duration, the views from lower levels were pretty decent and not lacking in a certain atmospheric beauty and appeal. As I climbed the southern nose of Sgurr Eilde Mor, I began to think about where I might head for tomorrow and where I might camp up and doss down tonight. It is always good to be out in the hills on a Sunday when you have a pass for the next day or two because it isn't a school night and you know the Sunday night feeling is not about to come over you. Still, part of me felt just a tad guilty that I wouldn't be there to lounge on the sofa with Ailsa and watch the Strictly results.Oh how Sunday nights have changed over the years!

The weather seemed to be trying to brighten up and in Strictly speak, I would definitely have given the sun ten out of ten for effort, even if the end result remained a little disappointing! It was trying hard to impress but when the moment of truth arrived, it just wasn't happening. In saying that, it wasn't all that bad. I had seen a lot worse and perhaps even expected a lot worse for today. You could say it was definitely more of a David James day than a James Cracknell day!

Not going to win any awards but better than it could have been! 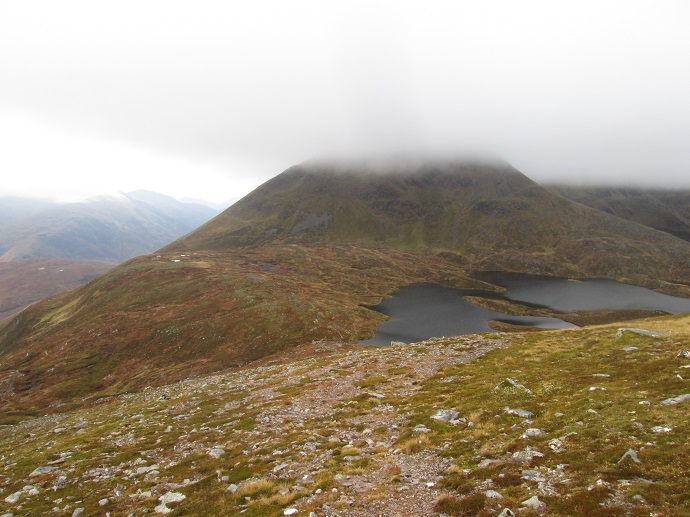 I still wasn't fully relaxed into absolute mountain mode after my few months of inactivity but arriving at the summit of Sgurr Eilde Mor, my first new Munro in 3 months sorted that out. The views came briefly, then went again, then returned briefly before going again. I wasn't fussed. It was just good to be up here, all alone, with no sound but the wind and the weight of the world somewhere else. Starting the descent into the cloud I picked my way down the steep scree slopes and onto the path that curves back round below the western flanks of the hill towards the lochan. At a suitable looking point I left the path and cut across country to pick up the path that descends down into the bowels of Coire an Bhinnein. Across to the lochan on the Binnein Mor-Binnein Beag bealach

Just beyond the river crossing, at about the low point of the route between the two Munros, I met a chap on the walk out from Binnein Beag. I told him that I wasn't sure I was looking forward to the walk back out from Binnein Beag, down into the depths of Coire an Bhinnein and then up the zig zags to the lochan below Sgurr Elde Mor. He said he had been thinking exactly the same thing just an hour or so previously! 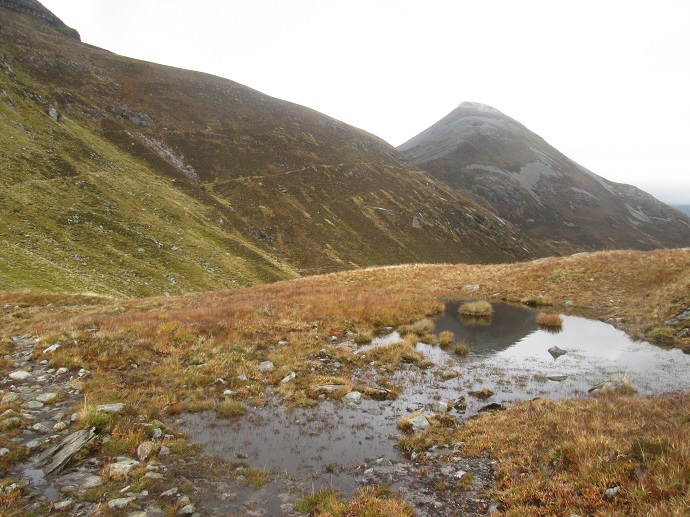 At the bealach, I opted to take the long way round the far side of the lochan to get the benefit of more photo opportunities. The things I do for a photo opp! 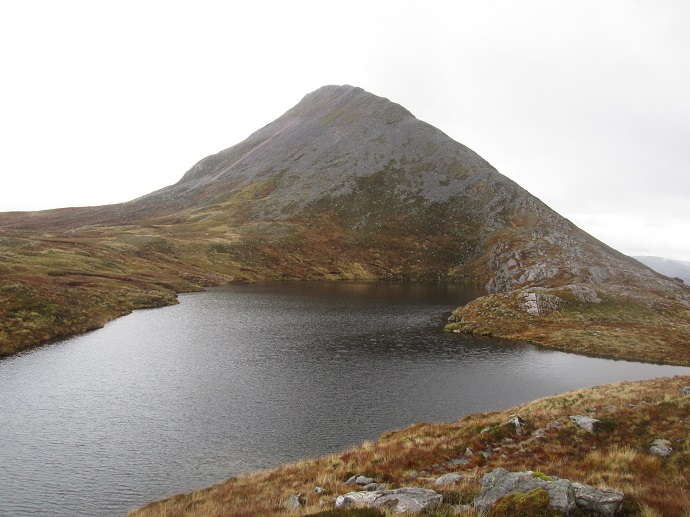 Then it was a case of picking my way up the broken south ridge to my final Mamores Munro summit where again I was consumed by the clouds that had stubbornly clung onto the summits all day. 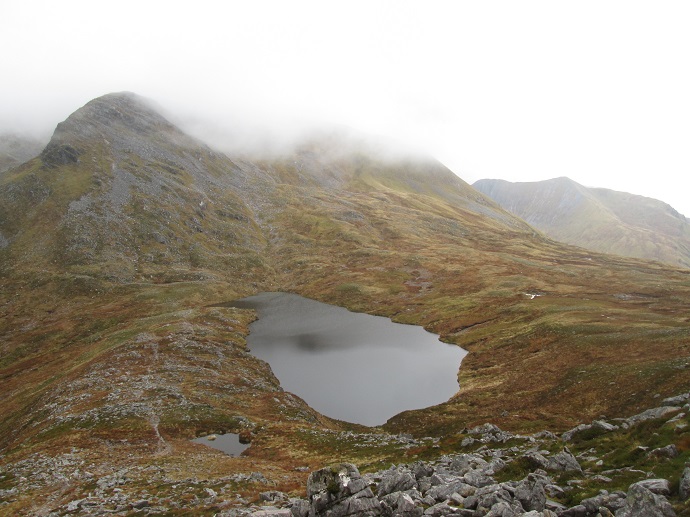 Double gulp! That's a long way back, and it's only just the start of it! Basking in the cloud on my final Mamores Munro summit

Then it was a case of taking a deep breath, turning around and starting the long walk down, up and back out to Kinlochleven! It's bliss really! Starting the long walk home - maybe just as well that it has closed in for the time being! A final look back at the day's two conquests Descending towards Loch Eilde Mor with Blackwater in the background 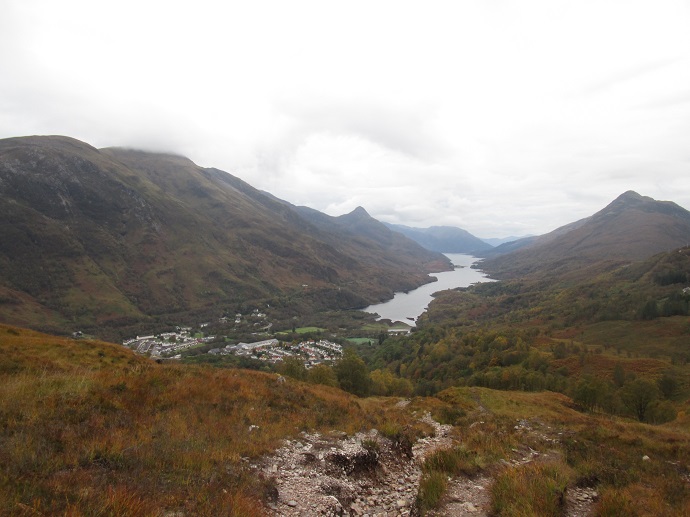 Almost home - Kinlochleven and the loch that gives the town its name, sandwiched between Garbh Bheinn and Mam na Gualainn

Still not sure where to head tomorrow, I hedged my bets and drove the short distance round to Gypsy Lane and parked up before heading for a quick pint at the Clachaig. Then I returned to the car for dinner, in the dark, having forgotten to take my head torch with me. As I retuned along the path through the woods above the river, four head torches came towards me and as I passed and said hello, one of the sinister looking characters said my name. Momentarily taken aback and blinded by the glare of four head torches, it took a moment or two for realisation to dawn. It was Alan Bellis and Keith Harper, along with their better halves! They were heading for dinner in the Lounge Bar and I arranged to head back later to meet them for a few pints in the Boots Bar, where a good time was had, albeit a good deal quieter by all accounts than the night before where the Gorton gang had apparently been up to no good on the tables!

A four day pass eh - you must've been working hard to earn that many brownie points !

Amazing how often people bump into others in the oddest of places - a small world. You've just reminded me that I'm hoping to get back to these hills some time having seen almost nothing the first time round. Thanks

Sorry you didn't get the pristine views we did but it's a great walk for all that - a path I've been up four times now and never tire of.