After a few jars the previous night in the Clachaig with Mr and Mrs Bellis and Mr and Mrs Harper, I set my sights on Glen Affric. As Alan had said last night, it is a fair drive up there from Glencoe but it had always been in my mind as I was planning my four day pass over the last few days and weeks. After all, Glen Affric owed me one!

The rain had come in as forecast overnight but Monday morning had dawned on a fairly positive note.It still looked like it could go either way though so if I was going to head for Glen Affric, it would probably be for the two eastern Munros. I am still haunted by the fiasco of my attempt to do the Mam Sodhail-Carn Eighe-Beinn Fhionnlaidh trio back in the summer of 2017.That had been aborted after a clag bound 2 hour sit in in the Mam Sodhail shelter cairn and I had sworn that it would have to be a guaranteed wall to wall sunshine day before I would try again.

It was also almost noon by the time I was ready for the off from the big new parking area near Chisholme Bridge so I suspected I might struggle for daylight hours on that route. Tom a'Choinich and Toll Creagach it would be then! I decided to tackle the more appealing looking Munro first via the craggy south east ridge over Creag na h-Inghinn. The track was making for excellent, quick, dry progress but this all changed after the little dam on the Abhainn Gleann nam Fiadh where the good track suddenly morphed into a section of monumental bog fest as far as the Allt Toll Easa. The bog was left behind as I took to the ascent ridge with views opening up behind me back down into Glen Affric as well up into the upper reaches of Gleann nam Fiadh towards Mam Sodhail and Carn Eighe. Higher still and Sgurr na Lapaich, the highest of the Mullardoch Munros began to pop her head above the skyline to the north. 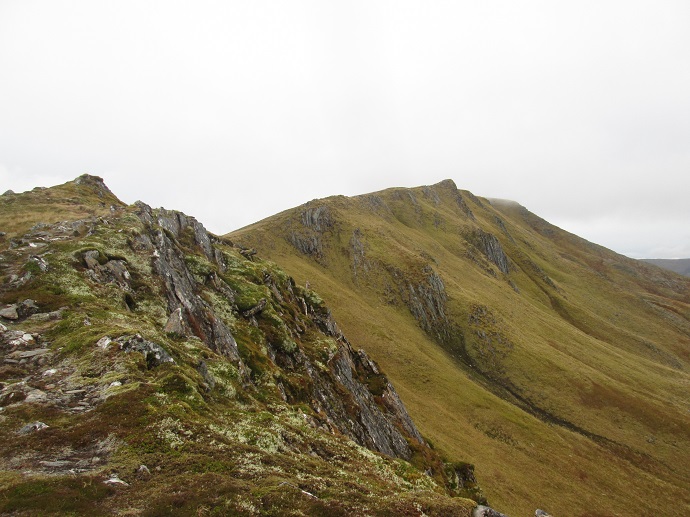 On the ascent of Tom a'Choinich Sgurr na Lapaich across the other side of Loch Mullardoch 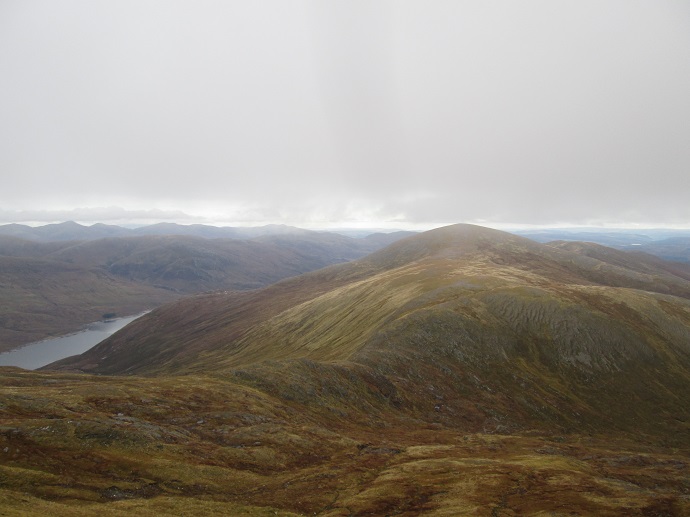 Looking back down the ascent route to the start

An easy walk on a gentle gradient across short grassy slopes soon brought me to the summit cairn and despite the lack of blue skies, the views were still good. Certainly a huge improvement on my previous Affric summit! Toll Creagach and Glen Cannich from the summit of Tom a'Choinich From summit to start Contemplating my next target After my outing in the Mamores yesterday and today's efforts so far, I was now thoroughly in mountain mode and set off for the thoroughly enjoyable walk down to the Bealach Toll Easa and up on to the easy, grassy plateau of Toll Creagach. There was not a soul around and not a sound apart from the October breeze. I was utterly in the zone and in my element. Descent to the Bealach Toll Easa 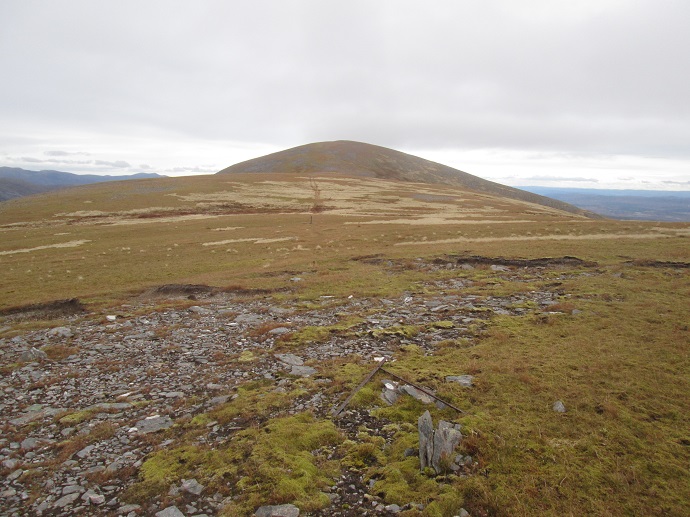 Sit back and enjoy the stroll! I was soon at the sprawling, rounded summit of Toll Creagach complete with summit cairn and trig point a short distance away. I spent a good 15 minutes or so sat by the trig point just taking in the sense of isolation and peace before heading due south down over Beinn Eun from where a tricky descent down through some crags led onto a boggy track that soon emptied me out onto my inward route and a couple of kilometres of track back to the car. The road home over Beinn Eun

Glad to hear you spent some time in the zone Mr D, mind and soul truly sorted I hope.

I haven't been up Tom & Toll since the hydro digging took place. Looks like the scars in the glen are healing

Glad you enjoyed your time in Panther's home territory!