Weather forecast was looking fine for a walk to Ben Klibreck. I realised that the ground would likely be a bit saturated but didn't seem to realise that setting off in the dark might consequently present problems. And it did, not least with me misidentifying the "correct" starting point. I did realise that I had got it wrong pretty early on but it hadn't seemed like much of an extra distance in the car so on I went (I had parked at the welcome to Mackay country sign instead of immediately south of the Vastagie bridge). If it had been daylight I definitely would have re-started from the correct/closer point though.
Not too long into the walk I got another notification of why the early start wasn't such a good idea as both feet got an early soaking in cold, wet bog. Fortunately, the forecast low temperatures and near freezing summit windchill never materialised or, at least, didn't bother me too much but I would still have preferred to avoid the slightly cold, damp feet. If only I had read Roger T's welly report beforehand...
I doubt if I ever picked up the atv track in the dark but I didn't find the going too rough, bog notwithstanding. I contoured south round Cnoc Sgriodain with some dawn light colouring the views west. At the bealach I was feeling a bit tired though. I wondered if feeling under the weather during the week was taking its toll and considered a shorter route over Creag an Lochain but I decided to stick to plan A. 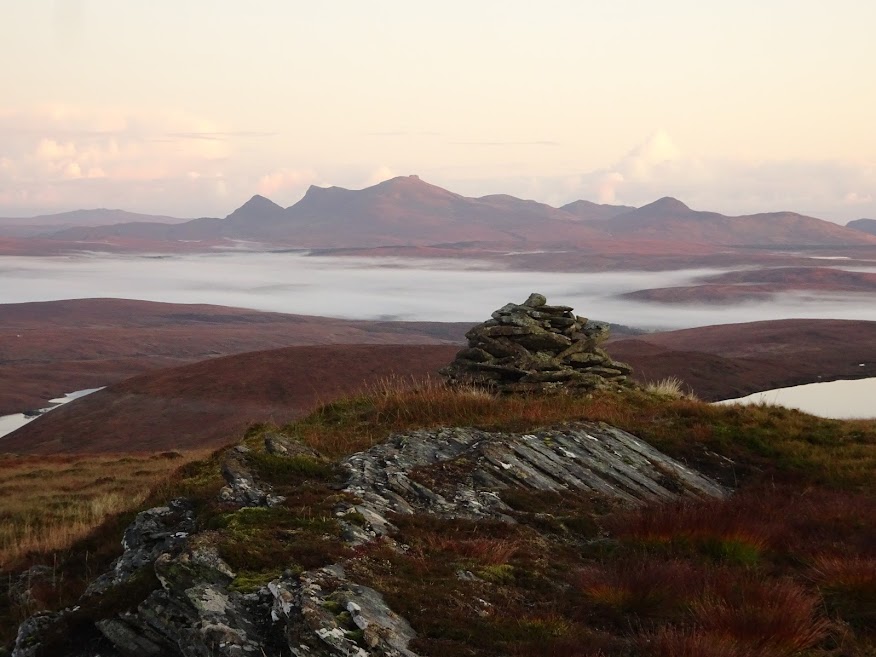 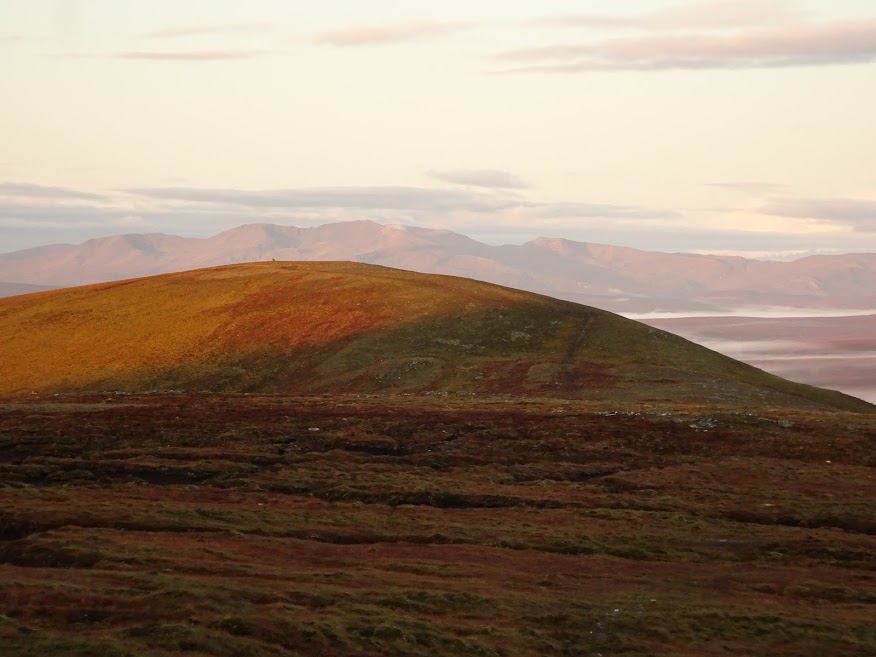 Early morning light on Cnoc Sgriodain with Ben More assynt and Conival behind. 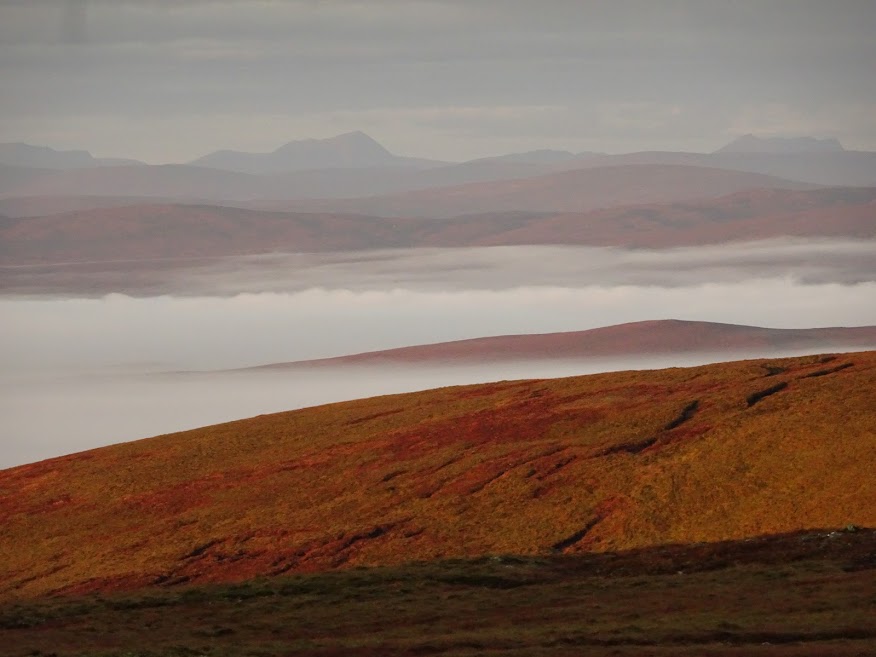 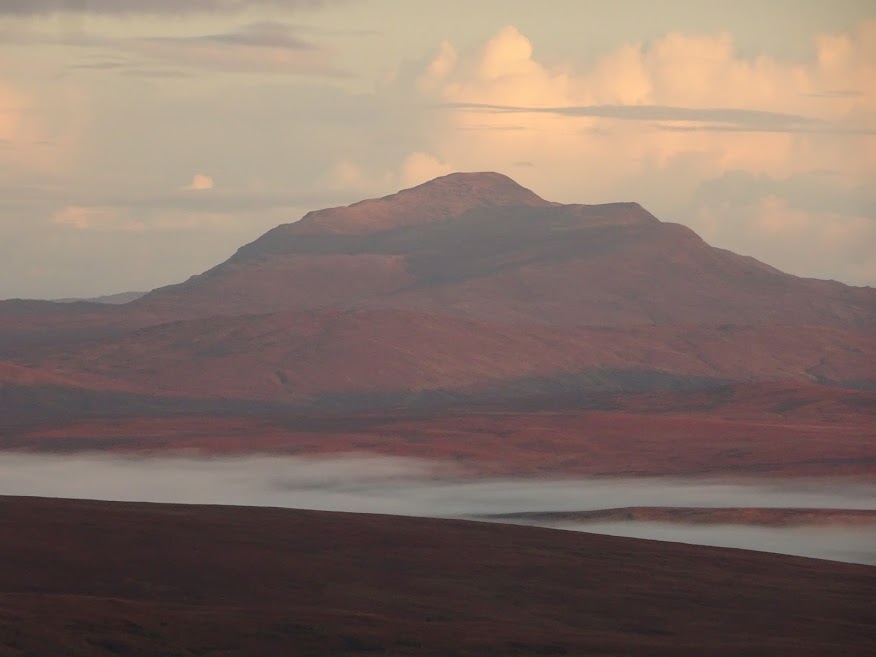 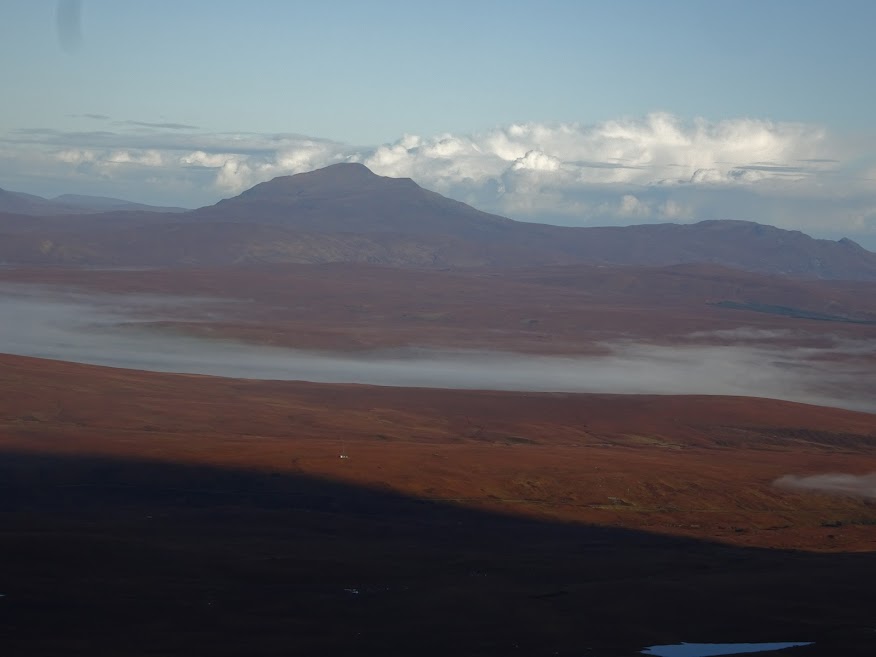 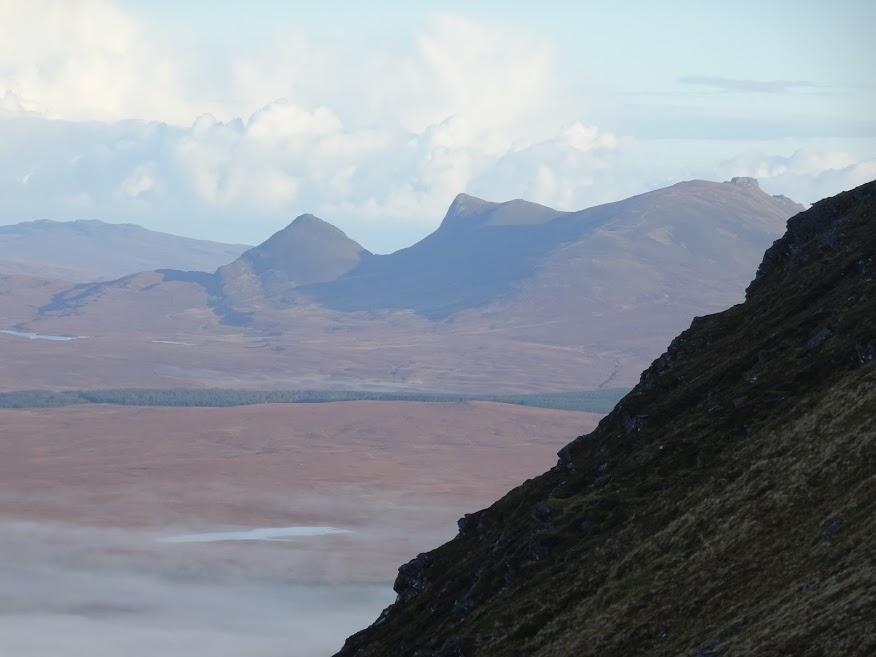 The leveliing off of the walk as I headed north did let me recover a bit but as soon as the gradient increased again I was struggling. Still, the views north and west were very fine and I was feeling glad about the trip. I veered ESE for the summit cone but even this attempt to lessen the gradient didn't seem to help my legs; I just had to resort to the obvious solution of slowing down a bit.
Got to the top a bit quicker than expected and had a few minutes at the top taking in the fine views and thinking about whether to take in Creag naLochain on the way back. I decided to wait to see how energetic I felt at the junction between the outward route and the possible diversion.
Looking north to Ben Loyal and Ben Hope I was also looking fifteen years into the past to when I'd climbed both with my wife. I also reflected on last year's walk to Ben Hee when I had gazed east to Klibreck and first contemplated this day's walk. Another piece in my walking jigsaw that won't be the Mubros or Corbetts but the places I want to go to.
As it turned out I felt fine at the path junction so extended the walk that little bit for a look into the corrie. Still a bit of a plod up that extra 120m of ascent but I met a friendly couple from Rogart on the summit as extra reward for my efforts. Ideally I would have returned via the Crask Inn but I was out of time and energy and desire for that. I'll return for a walk from Crask Inn though as it looks interesting on the map. 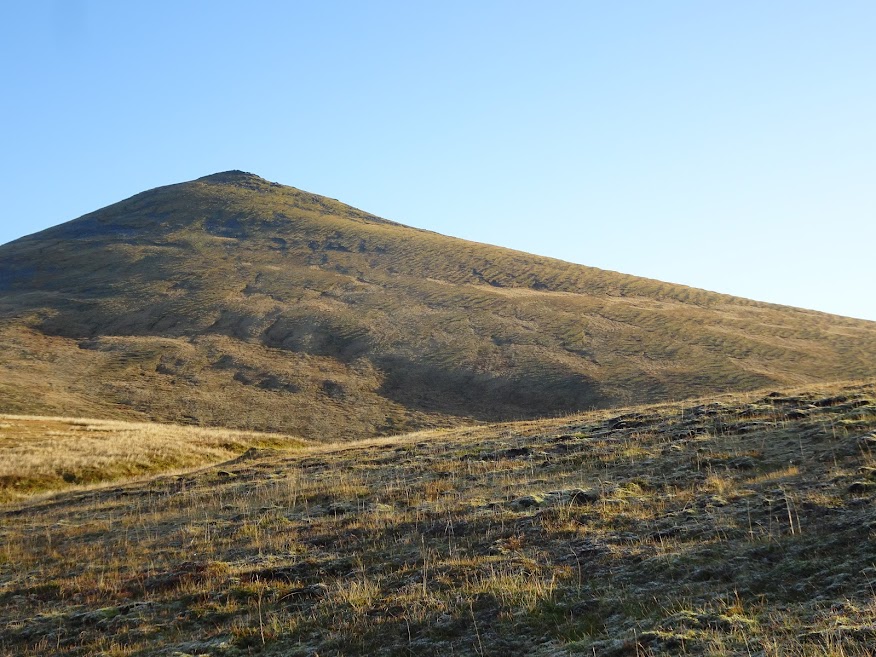 Interesting and practical striations that were a bit of a help with my slow plod up the summit cone. 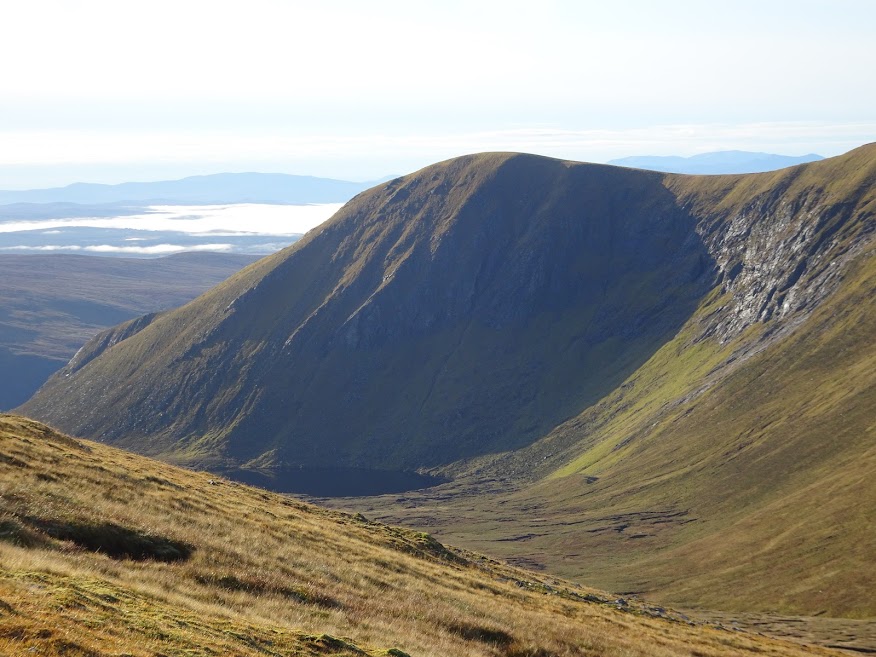 View onto the corrie to thew south. 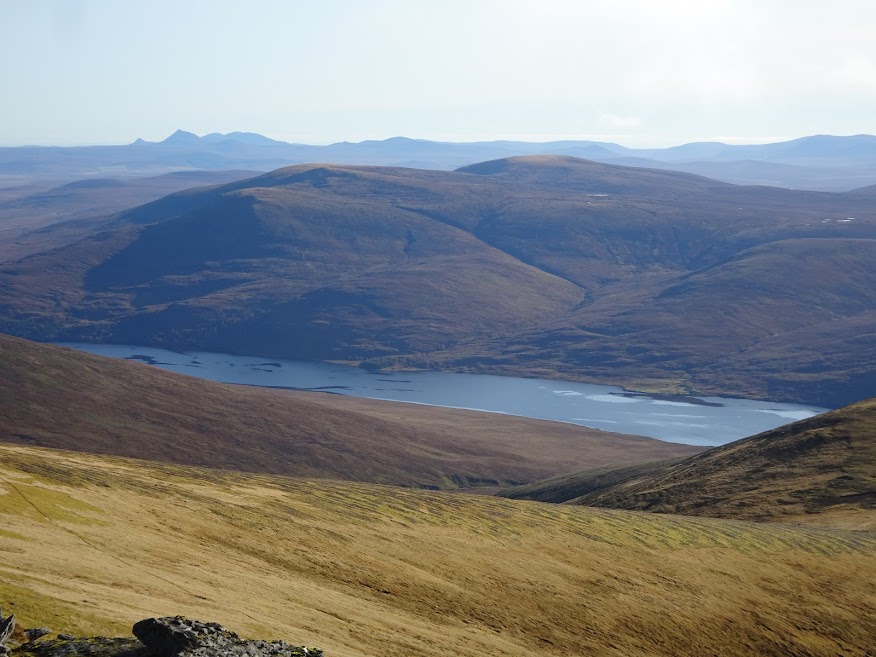 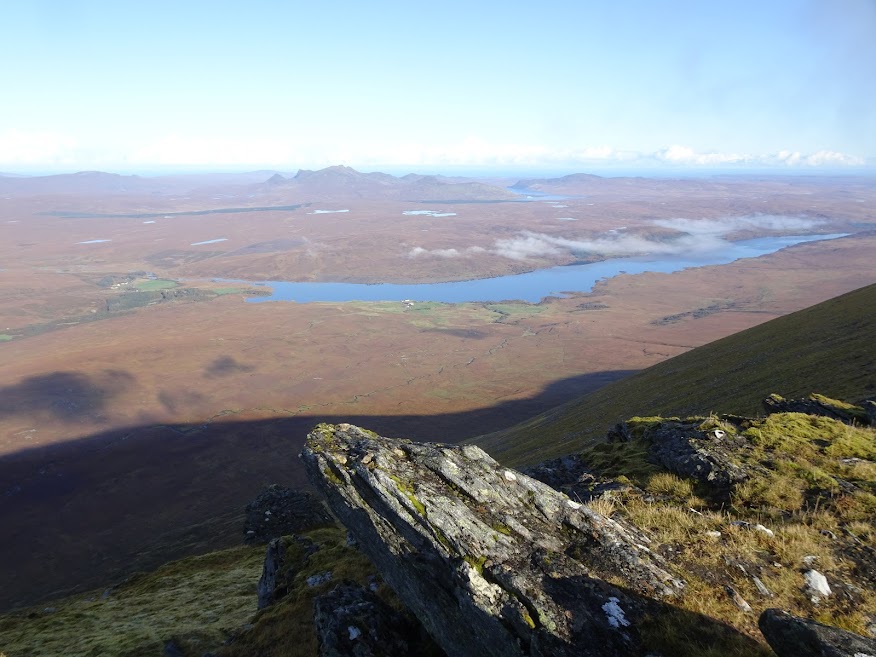 Loch Naver with Ben Loyal beyond. 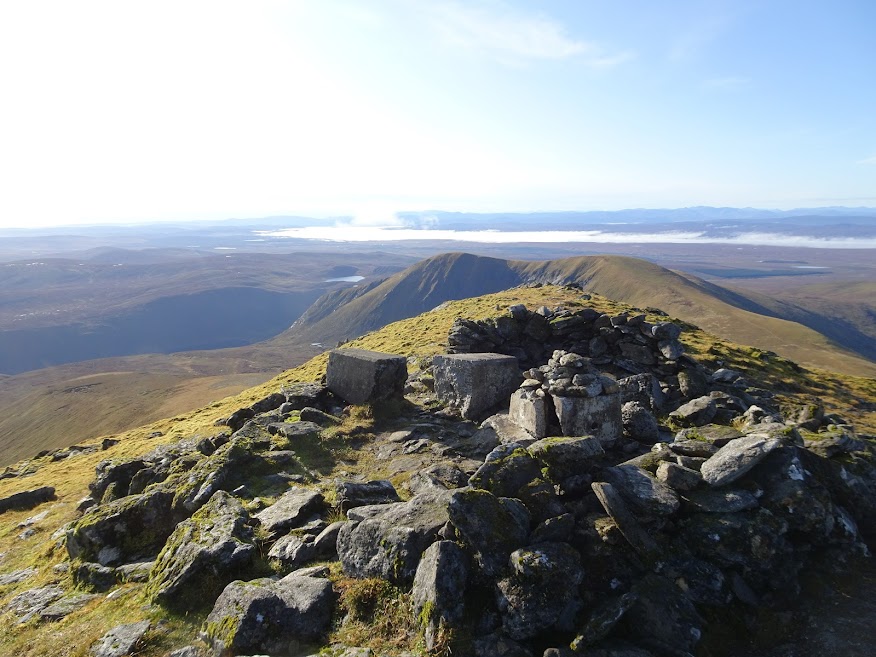 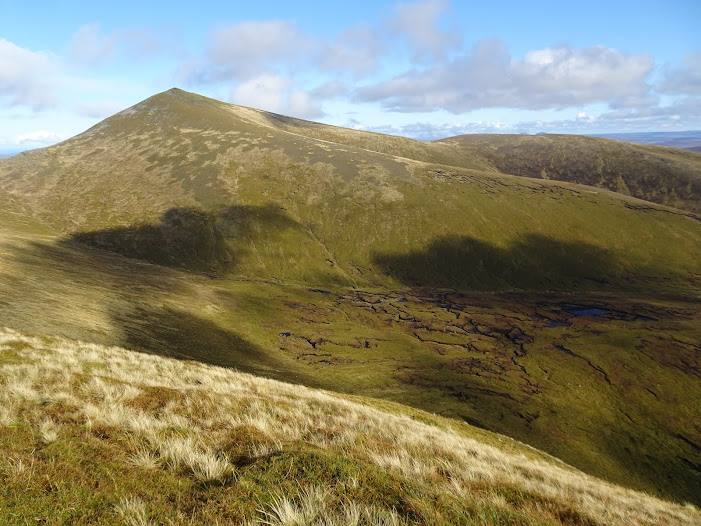 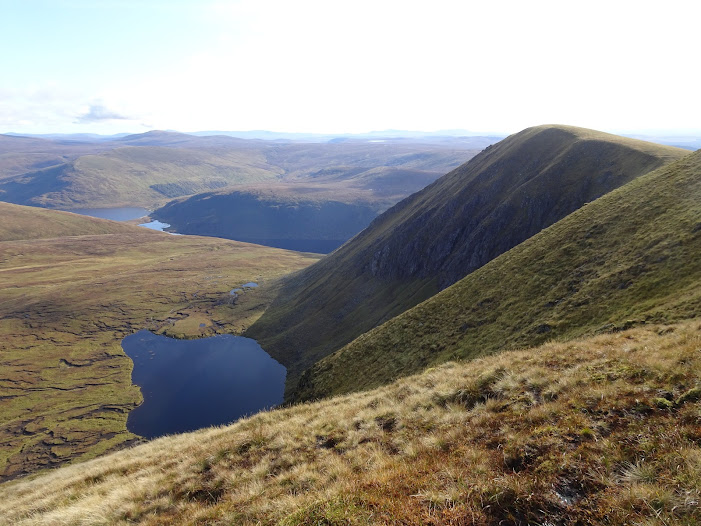 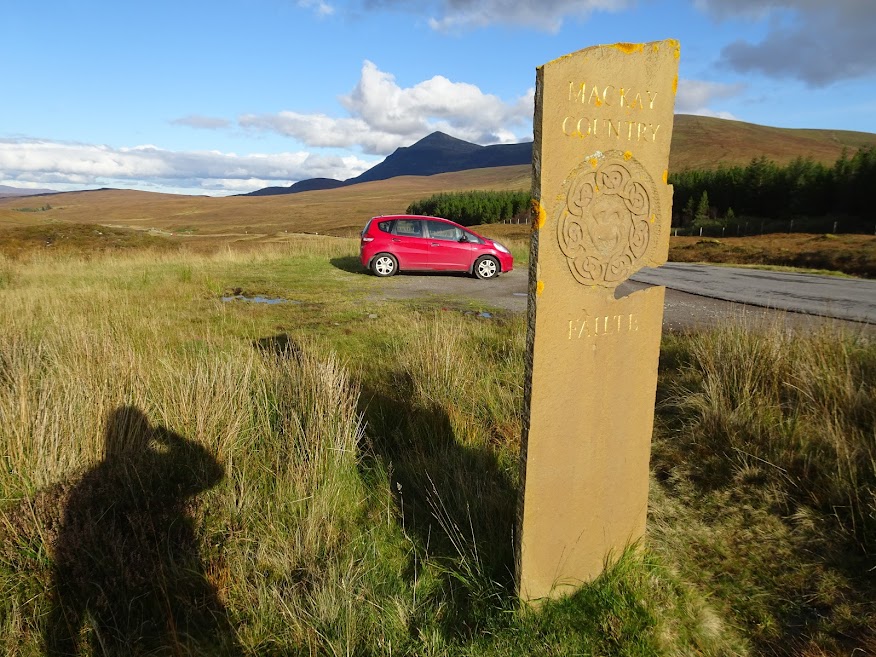 Back at the "wrong" car park.

Got a cold after, supporting the theory that cold feet lead to blood vessel constriction and reduced delivery of white blood cells to fight cold virus. So says google anyway.

Wet feet aside, some nice early light - a good result all in.
Re getting a cold - I wouldn't believe everything you see on the internet

Can provide a good, easy recipe for a hot toddy if needed - doesn't get rid of the cold but you sleep well

The soft light in late summer and autumn in Scotland is simply unbeatable! I hope you'll recover soon!

rockhopper wrote:Wet feet aside, some nice early light - a good result all in.
Re getting a cold - I wouldn't believe everything you see on the internet

Can provide a good, easy recipe for a hot toddy if needed - doesn't get rid of the cold but you sleep well

Quite pleased that I managed the walk ok and the cold I caught didn't amount to much. Great views of Ben Loyal, Ben Hope and Morven.

The soft light in late summer and autumn in Scotland is simply unbeatable! I hope you'll recover soon!

Thanks. Yes, the light and the mist very fine indeed. Fully recovered now...until the next time!