Very long day for the pensioners

Very long day for the pensioners


Our first opportunity to get out after George had spent a week abroad eating and drinking too much, where to go was the first hurdle. With Parminder now having less than 100 hills left I firstly studied the weather forecast, the east was going to be wet, so west it would be. Next hurdle which hill/s, the main problem we are encountering now is the reduced number of daylight hours, which when attempting to tackle mulitple hills becomes a major problem.
I opted to head to Glenfinnan, it is 4 years since I was there and the one thing that always sticks in my memory is the time it takes to get from one summit to the other. Last time I tackled them clockwise, this time we would try them the other way and I am still amazed that it takes 2 hours and the undulating broad ridge is quite energy sapping.
Parminder volunteered to drive and to save him doing a tour of Fife we met up at Halbeath Park & Ride at 5.15am. The plan was to breakfast in Fort William and that was an excellent decision, the bad decision was all 3 of us carting our lunch in our rucksacks that were left uneaten. For those who are interested we had the large fried breakfast which is just under £6 including a drink, the scary bit was the menu also lists the number of calories which is 1350. We didn't feel too guilty as my phone app worked out that we did over 40,000 steps and burnt 2150Kcals.
On arriving at the walkers car park we were met with a locked gate, so we had to pick a space in the nearby Scottish National Trust car park and we were fortunate in that the parking machines weren't working so we didn't have to pay the £3. Now onto the walk itself and the usual occasional photo.

Empty car park, would be full on our return

The Glenfinnan Viaduct, well part of it, it is difficult to get the whole viaduct in a photo especially with all the trees and other greenery

The way ahead, for the bicyclists who fancy saving a bit of time the tarmac surface is excellent no potholes unlike the majority of roads 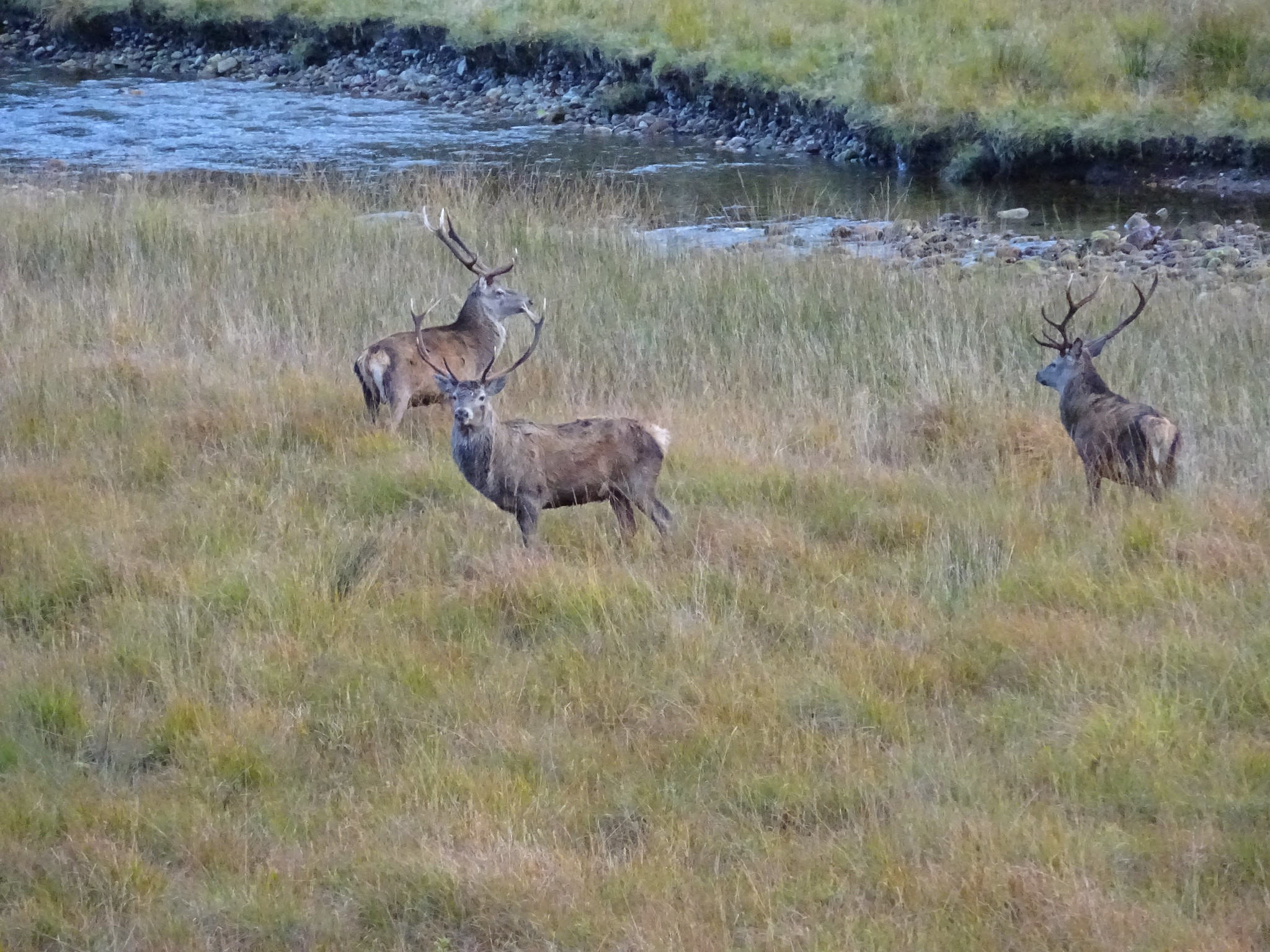 I will borrow George's comment - a small stag do 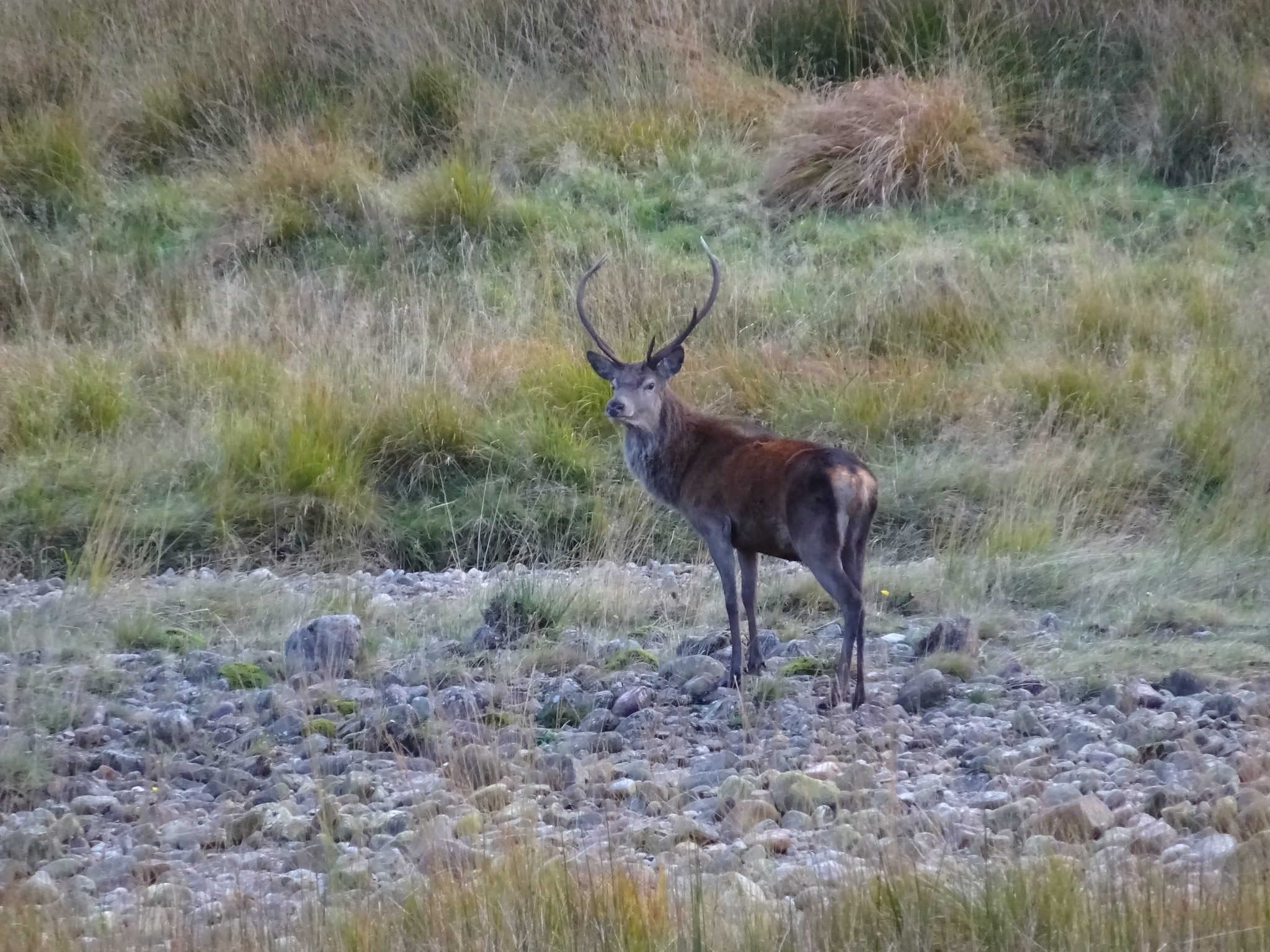 Looking back at the viaduct

Our cue to leave the track and head uphill

Parminder romping uphill after his huge breakfast, you may notice another walker a bit higher up. We met on the summit and had a brief chat, he was up for a week from Kent

George head down and loving the going up

Looking back down Glenfinnan, George has been edited out

Parminder insisting I take a photo of him front on, instead of his backside

Parminder off again, happy that he has had his photo taken

Looking back down, Loch Shiel starting to appear

Loch Shiel in the distance 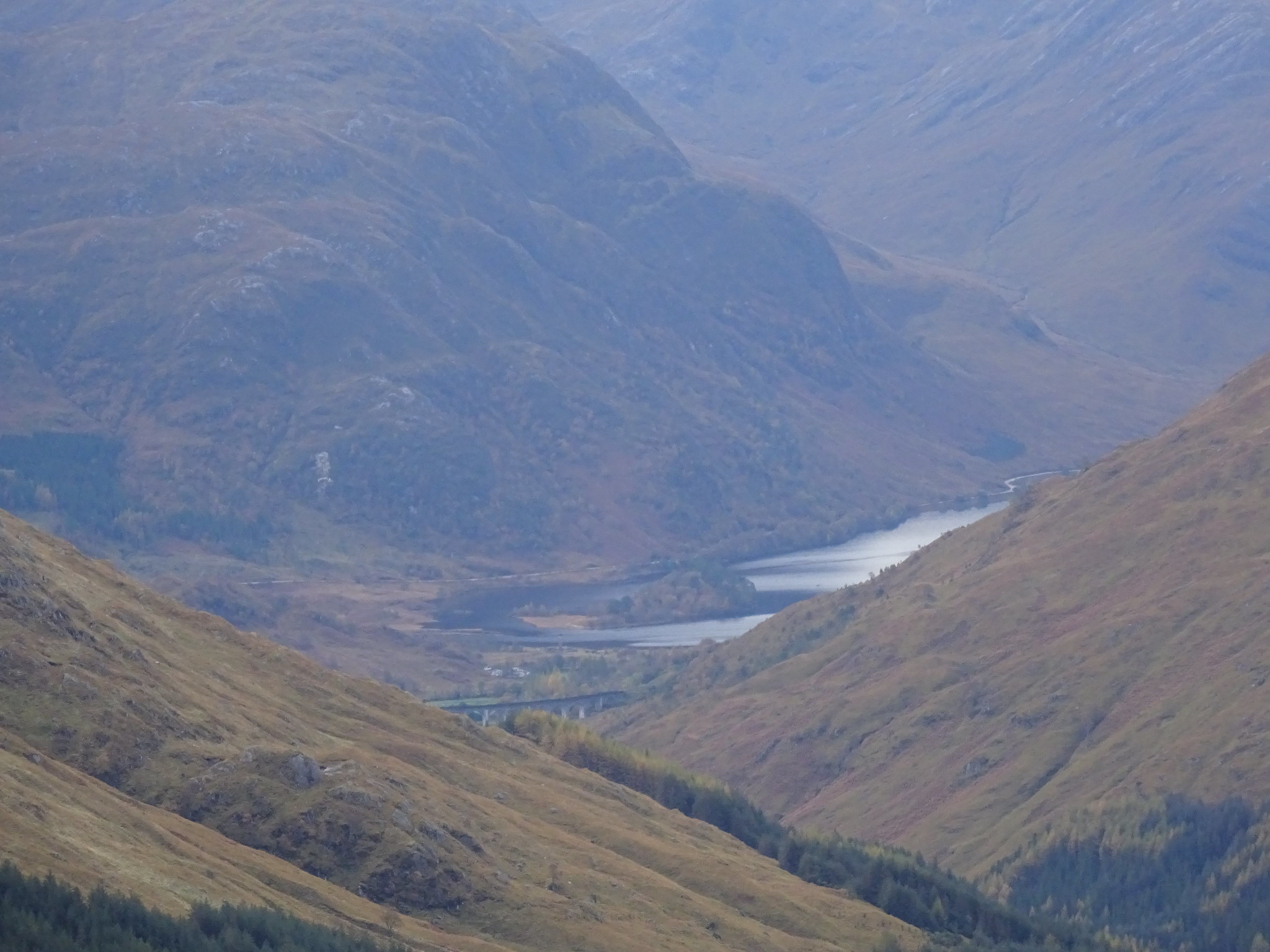 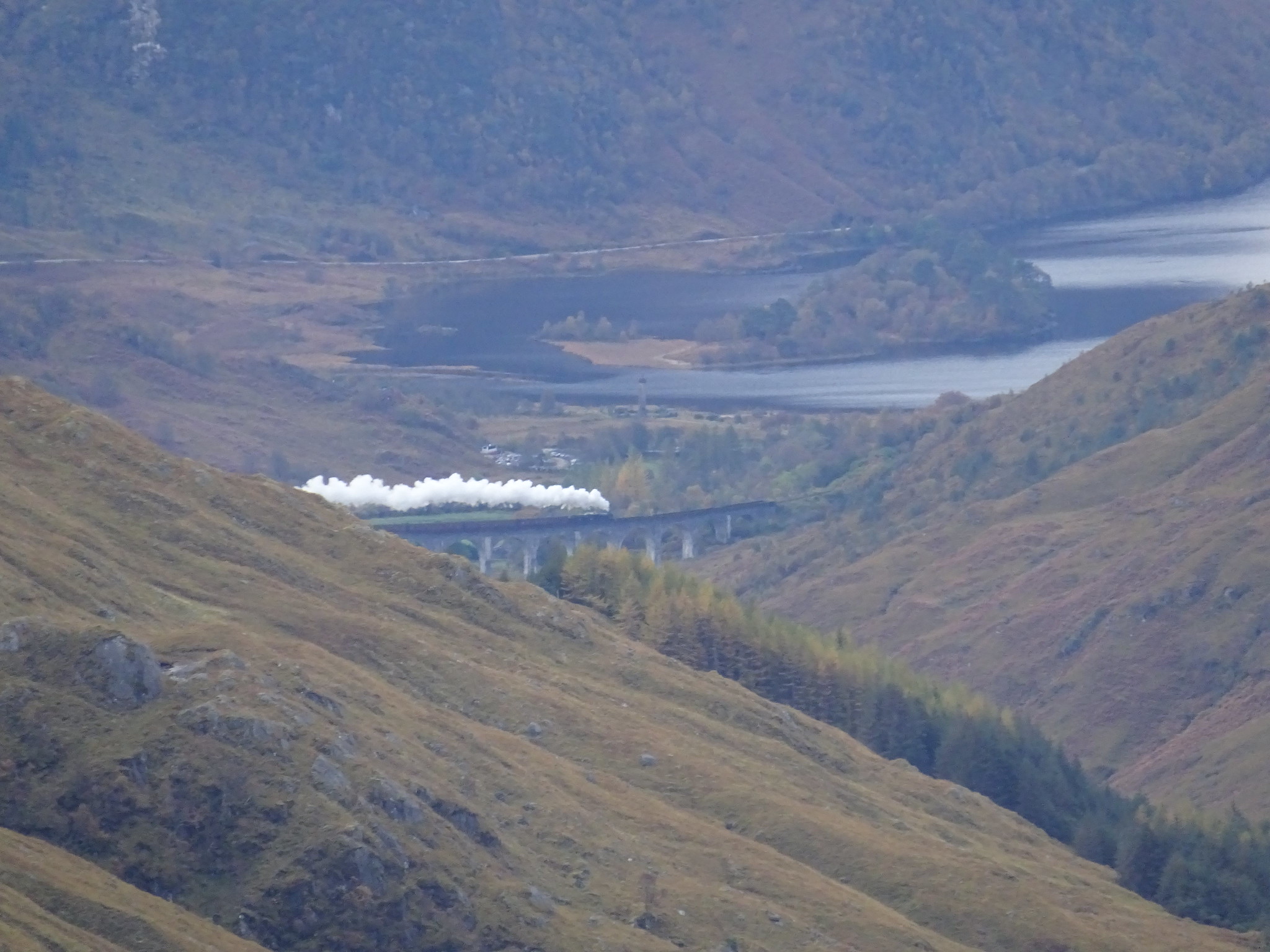 Managed to catch the 'Jacobite' crossing the viaduct 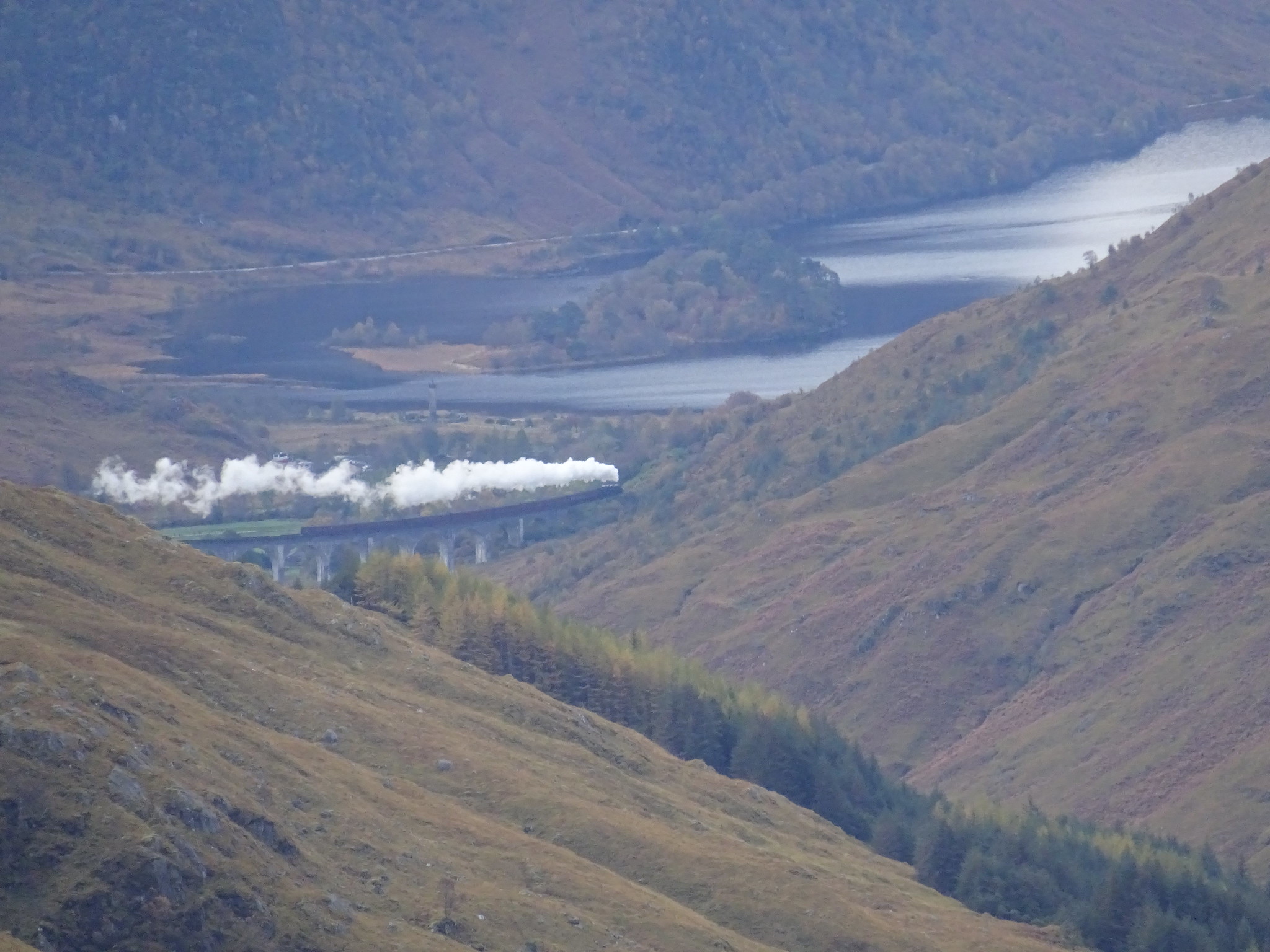 More fluffy cloud to the west

Looking across to the 2nd hill, looks very impressive

Not quite an inversion though

Our route west obscured, that would disappear in an instant

And then it was gone, what a view west, Loch Morar appearing for the first time 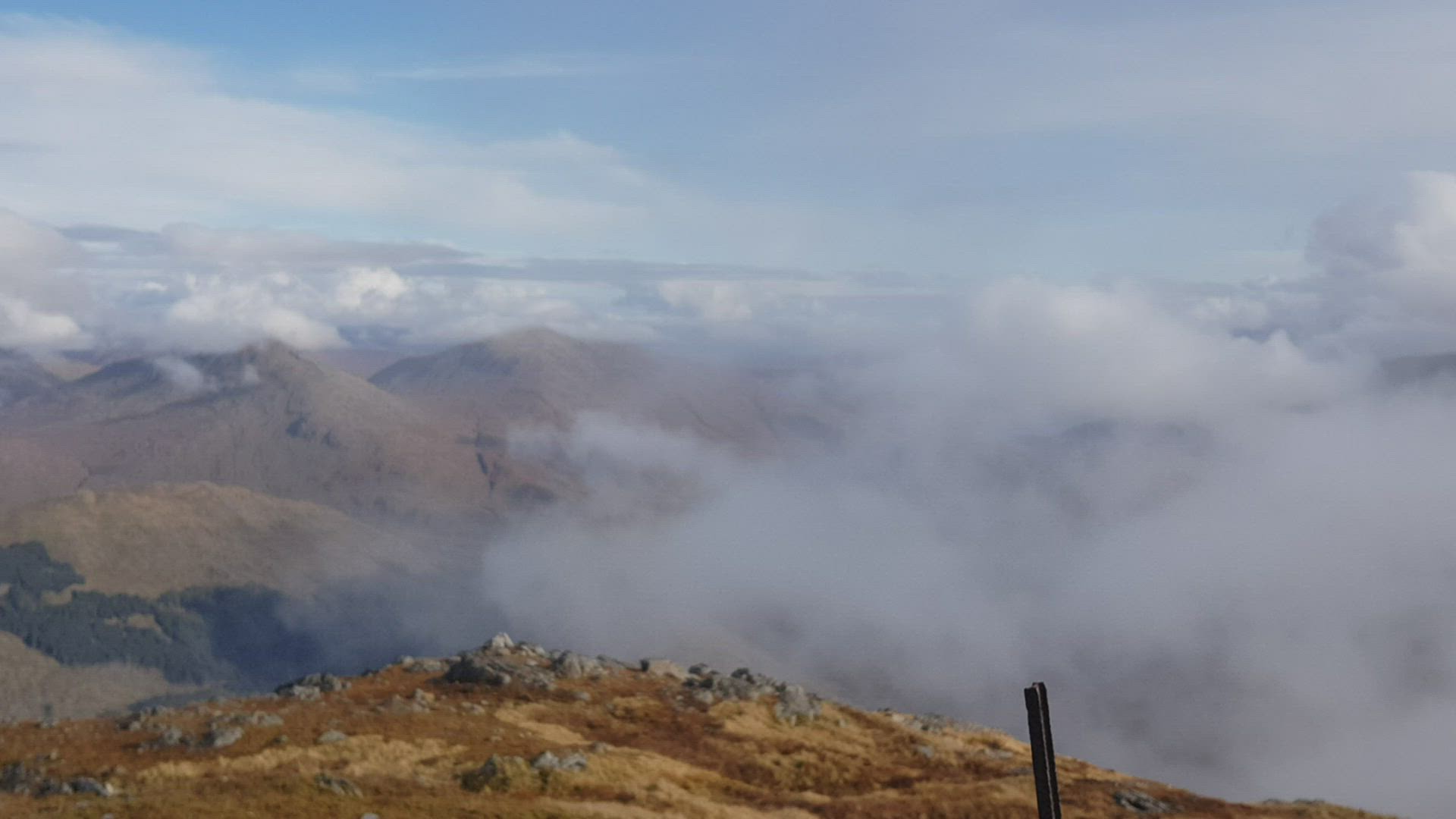 Video taken on the summit of Sgurr Thuilm 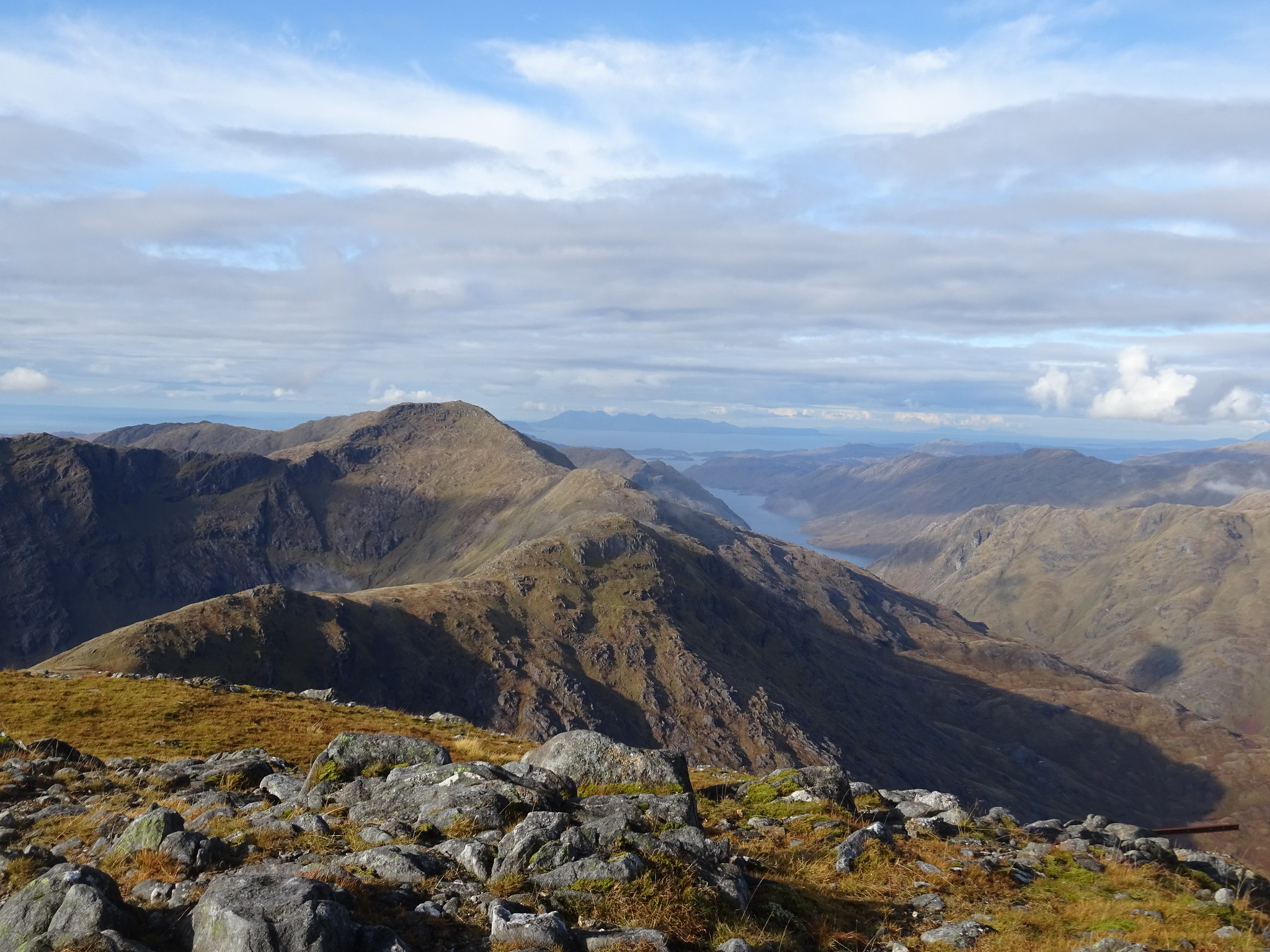 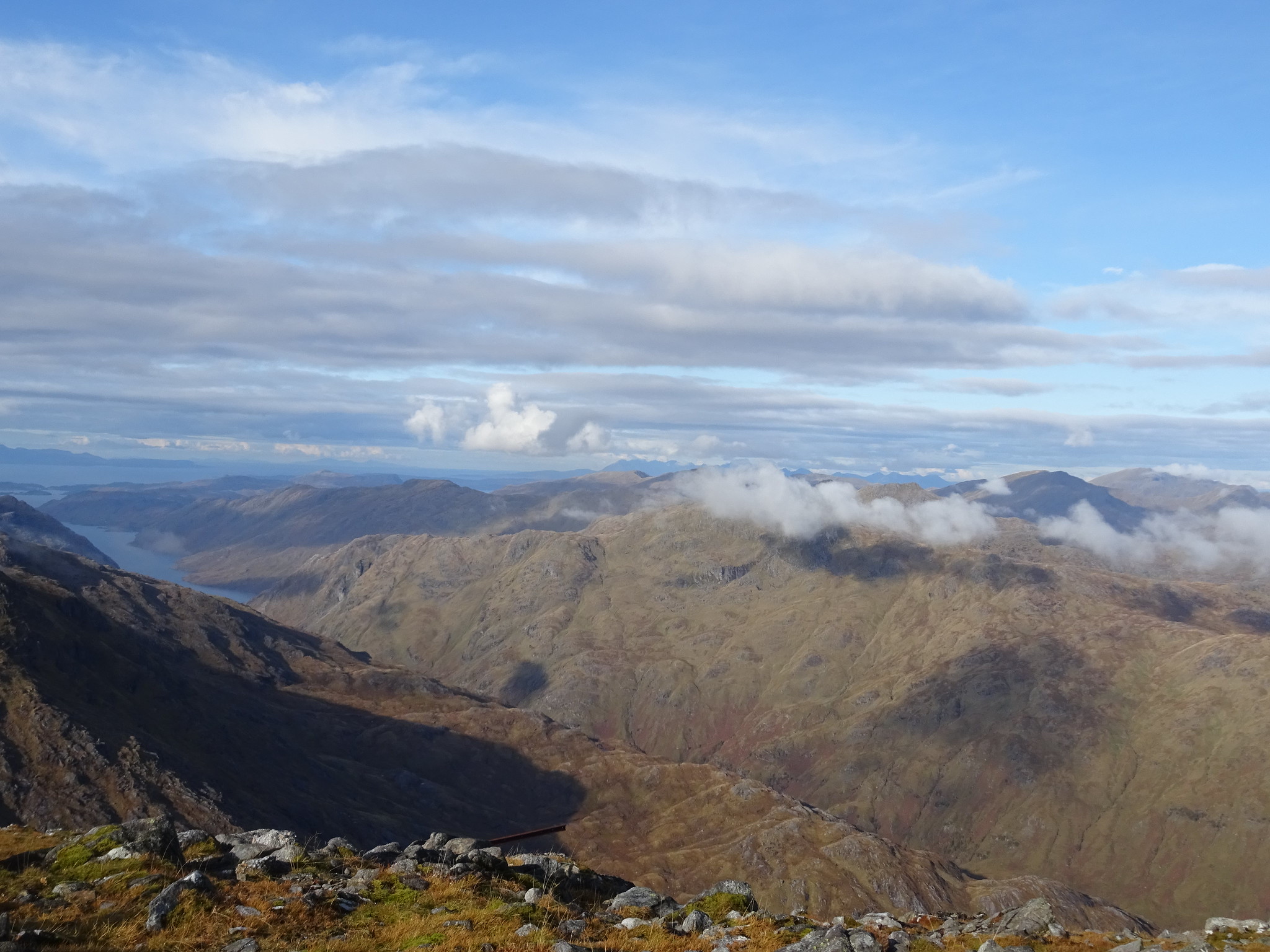 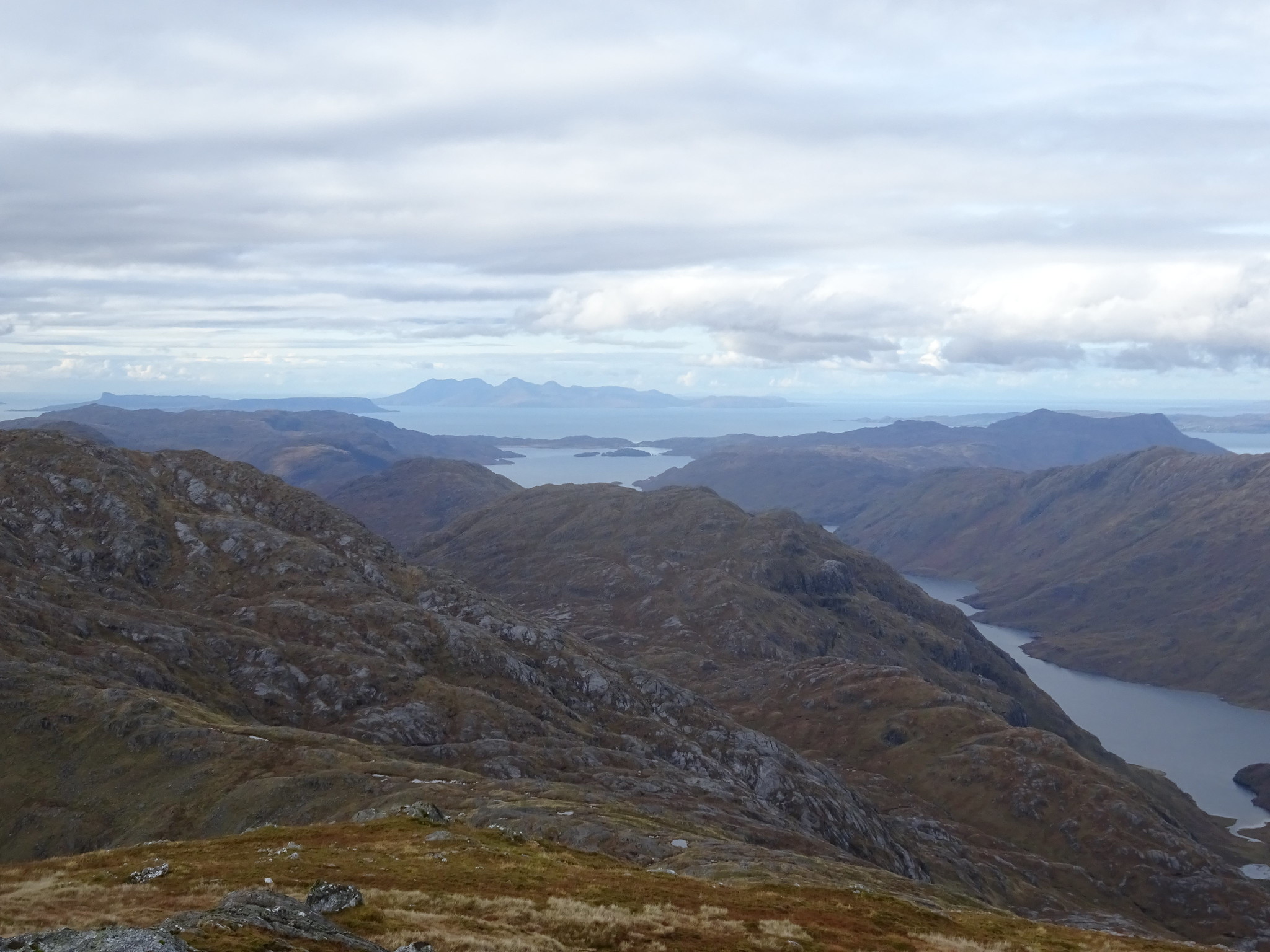 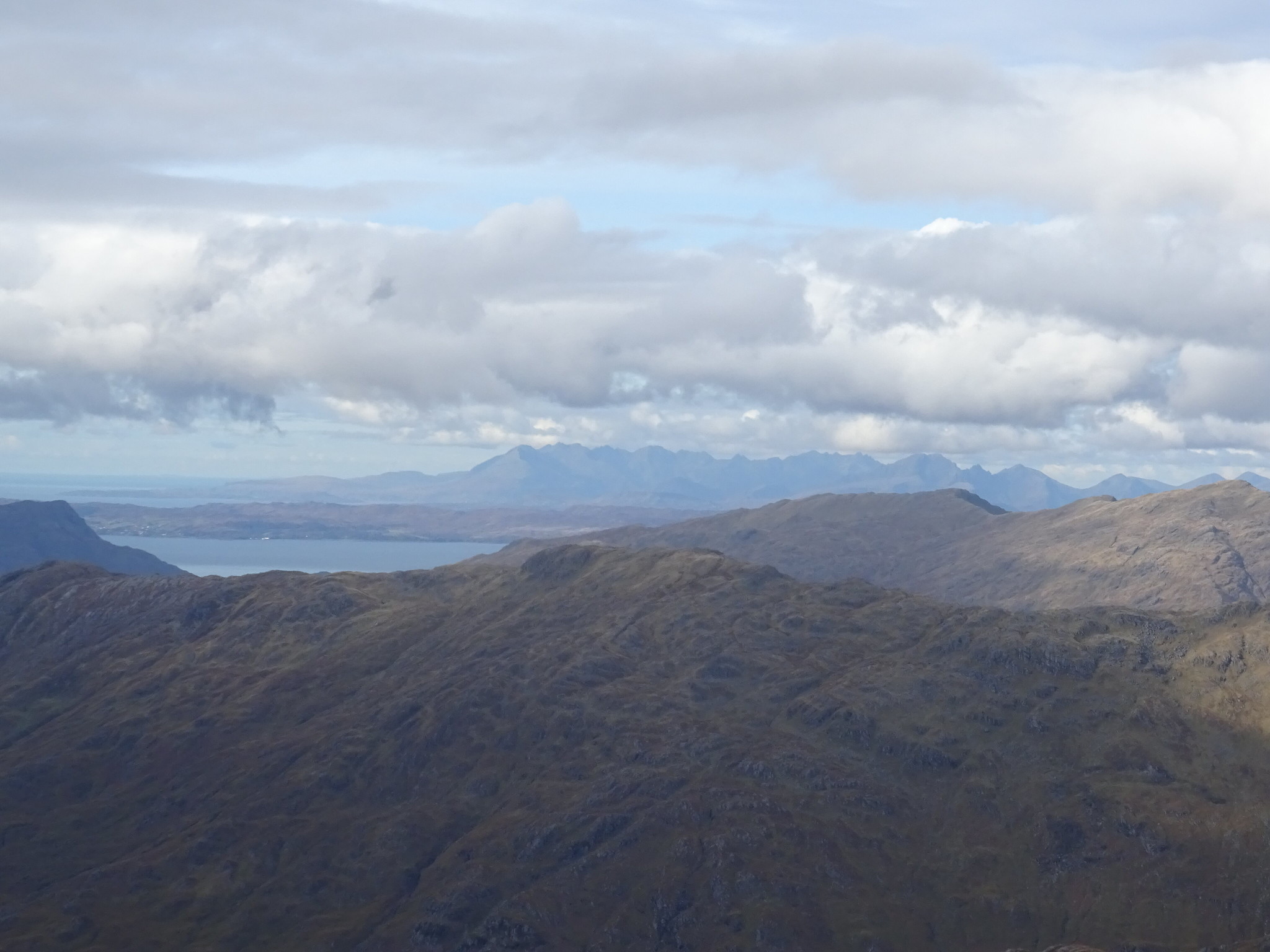 Skye in the distance 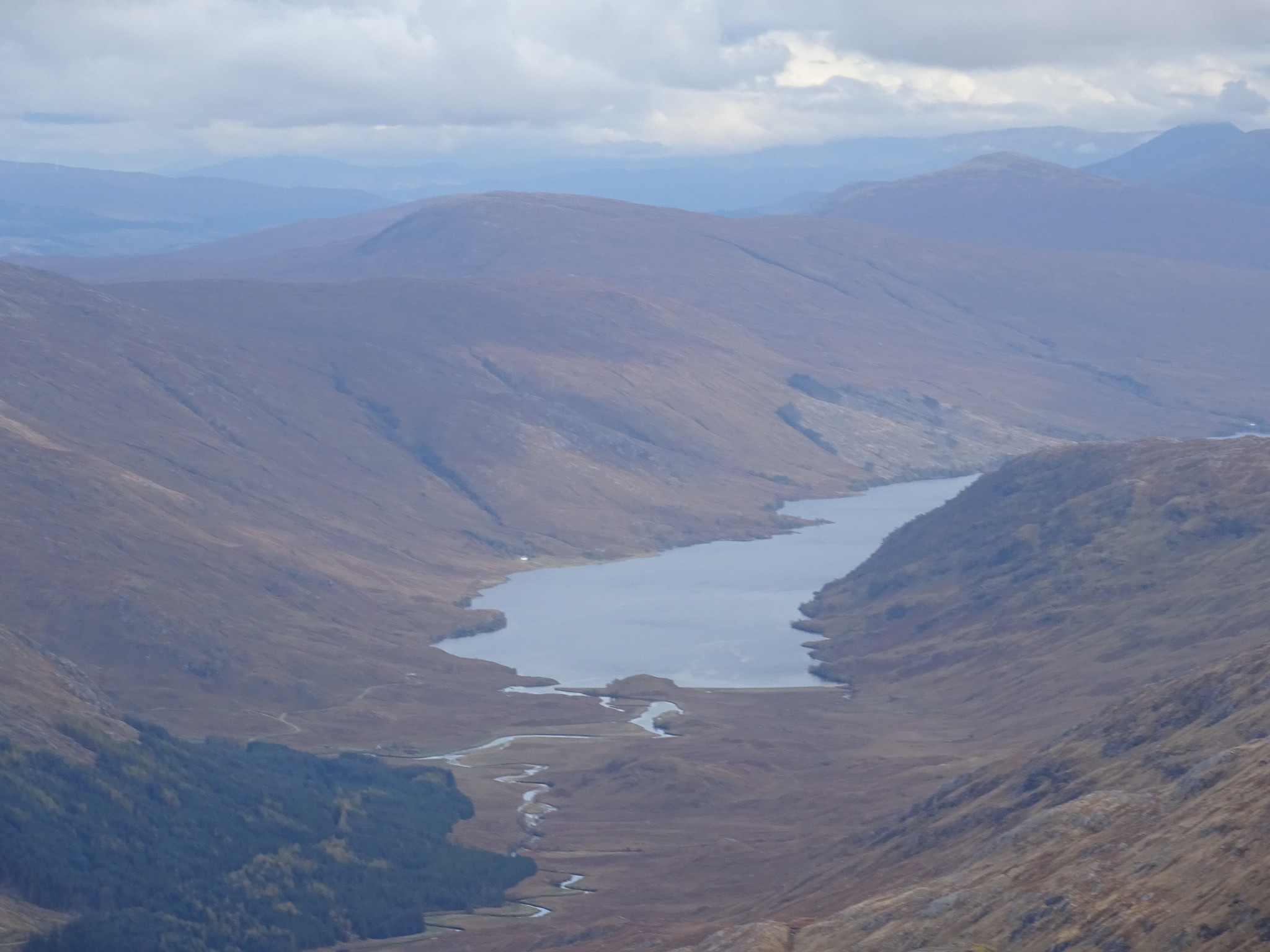 After taking the odd photo it was time to head down and west and catch up our friend from Kent, as I stated earlier the broad ridge west is very undulating which explains why the total ascent is over 1400m. We took the direct route and picked up the path near the bottom of the initial descent.

The old boys having a rest, a drink and a few sweeties 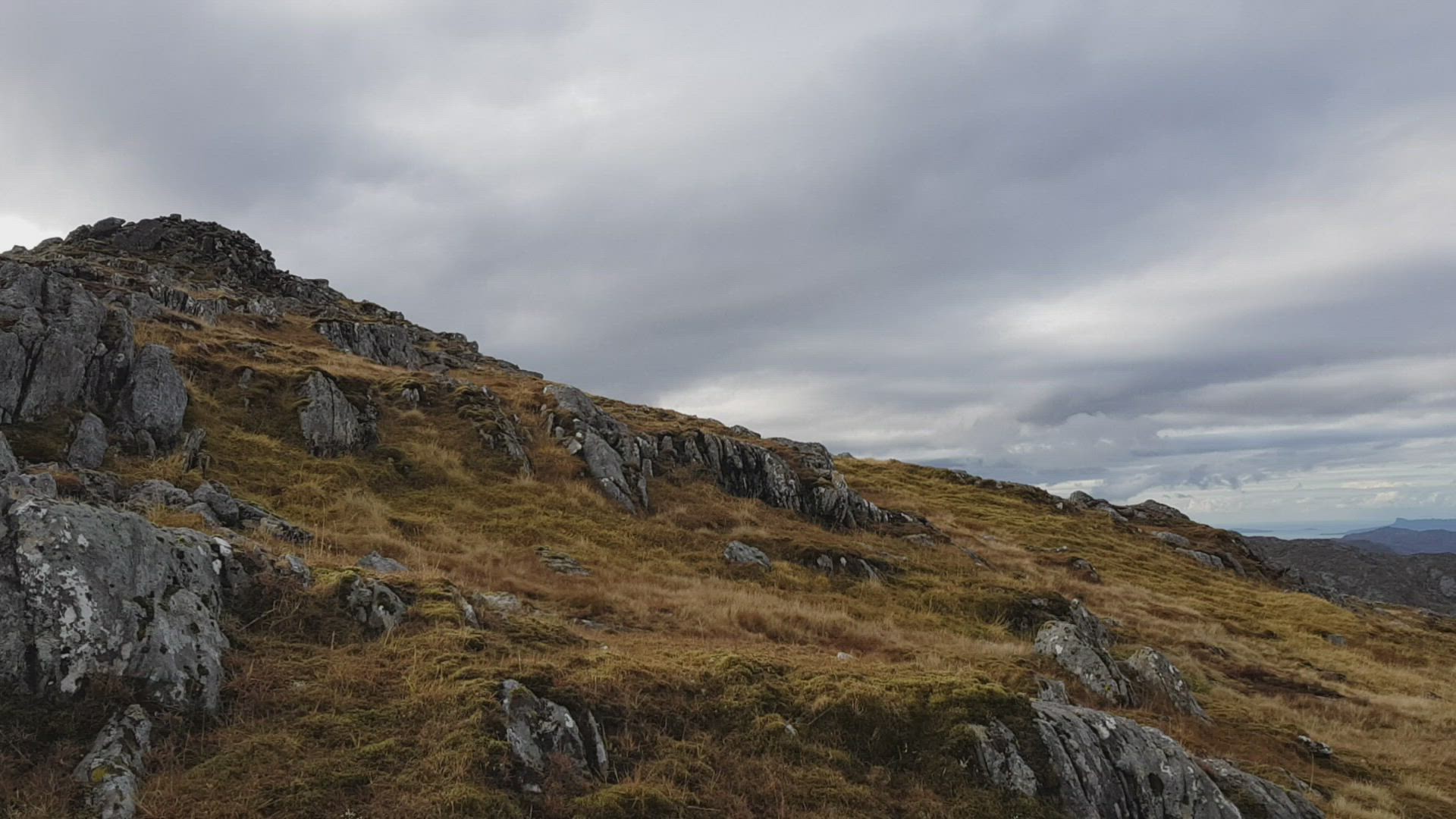 Video taken just before the summit, so mainly west and north

Not a bad view to the west

We came all the way from over there

Now the final descent, with the odd going up bit.

For some strange reason I never seem to take many photo's on the descent, here is one for a change

Looking back up what we came down

The wee signpost if you want to go clockwise

This was a fantastic day, the weather certainly helped. A huge thanks to Parminder for driving, going was easy but it was chucking it down on our way home so that certainly makes one more focused and concentrated. That was a nice gentle warm up for next weekends 'Meet' at Drumnadrochit, we have the usual ambitious plans and if everything goes well Parminder will be able to tick off another 8 Munro's.

Good result - well done the pensioners especially without bikes.
A bonus with the weather and another seeing the Jacobite. Thanks

Guys. Thanks for your companionship on another memorable outing

Remember looking at Sgurr Thuilm from Streap and wondering if we had enough energy for a second visit. The answer was an emphatic "NO!", you certainly know you are doing the hills from nearly sea level when you park in that car-park. My legs felt quite heavy just following you up on the report..