Having seen the raft of walk reports over the last few days with great weather and views and with Sunday’s forecast for Killin showing blue skies and sun, I left Glasgow early and headed up the A82 with much optimism.

On reaching Killin, there was then about another 8 miles west along the Glen Lochay single track road until I got to Kenknock; that’s a road I wouldn’t like to drive if it was covered in snow ! I had remembered seeing a note on WH that I could drive part way up the Hydro road to Glen Lyon if the gate was open; as it happened, the gate was open but I decided not to drive it as I was worried they may close it. In any event it probably only saves just under 3km there/back and 150m of climb.

The plan was to start with Beinn Heasgarnich then go on to Creag Mhor; the usual way is clockwise but I was thinking that, if things went very well, I could add the corbett, Cam Chreag, on at the end. In the event this didn’t happen leaving the corbett for another day.

It was starting to get increasingly cloudy and the tops weren’t all visible when I set off – turned out to be a warning of things to come.

I walked up the tarmac road past some cows in a field and quickly reached the junction where the road joins with my return route track. Staying on the tarmac road I walked up the glen with Creag nam Bodach to the west. I probably had a layer too many on as I was getting very hot – the temperature was just above zero and no wind at this stage. After passing the lochan on the left of the road and getting to the end of the crags, I found the start of a track which took me off the road westwards. Unfortunately I soon lost the track in the snow and ice but knew I had to head SW to follow the Allt Tarsuinn. During this stage, I had several stops for microspikes, crampons, waterproofs etc due to rain alternating with snow showers and changing ground conditions. I followed round the Allt Tarsuinn as I couldn’t see an easy place to cross it then began heading NW to go up round the crags. The clouds had been becoming increasingly threatening and soon I couldn’t see anything but white – snow on the ground seemed to merge seamlessly with light snow showers and thick cloud. Peering into the distance I could make out the odd rock but it was tricky navigating with the map showing come crags close by. I was also slowed up a lot due to continually having to stop to check direction. My final approach to the summit was from the south rather than the east as I preferred that approach in the white out. I arrived at the summit cairn and couldn’t see a thing. So much for clear blue skies, sun and snow pictures – I’ll keep dreaming. 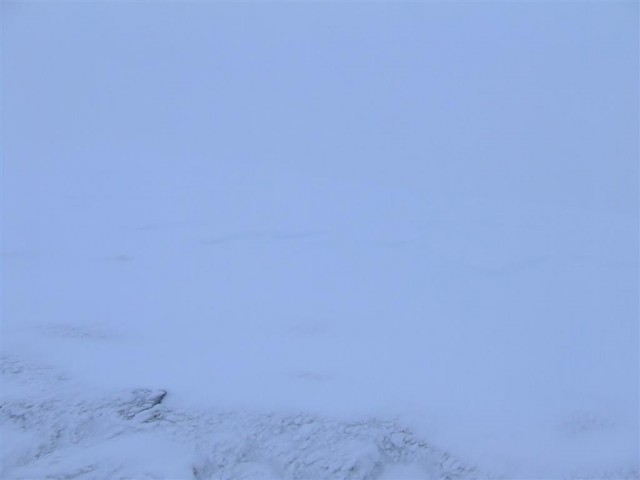 After some refreshments and a (very) few pictures I headed off south towards Stob an Fhir Bhogha then west to Sron Tairbh. This bit was reasonably straightforward barring the fact that I couldn’t see where I was going and was navigating blind (the gps was a great help in getting a position). I then had to cover the steep descent down Sron Tairbh to get to the bealach before climbing Creag Mhor. Looking back on it now, I found this to be one of the hardest descents I can remember. It may have been the alternating rock, ice, snow, grass etc or just that it was steep – I’m not really sure. At this point my left knee started to play up again; it gets sore just below the knee cap from time to time and then gets a wee bit shaky mainly on descent. I should’ve taken out the poles to help me. (Probably just making excuses for not being fit enough). On the plus side, the weather was starting to clear a bit and I occasionally got glimpses of what must have been some great views through the cloud. I had to get past the various bogs which was a bit easier than usual as many were frozen. As I started up Creag Mhor north of the crags, I saw another three walkers coming down in the opposite direction and waved over to them. I stayed well north of the crags to avoid some deep looking snow topped out by an overhanging cornice before heading south then south east after reaching the ridge. The weather was at long last starting to clear and I got some good views over to Ben Lui and up to the Bridge of Orchy hills. The wind was starting to get stronger when I reached the summit cairn on Creag Mhor where I took a few more photos and had some refreshments. I reckon it had taken 1 – 1.5 hours more than I had thought to get to this point and there was no way I was going on to the Corbett now especially as it would extend the walk rather than be on the return route. Heading off SE, I made my way down Sron nan Eun and through its various craggy sections. Towards the bottom, I then headed east towards the last set of crags – this part also proved tricky as it was hard to find a route which didn’t have overhanging ice above the waterfalls; it would probably have been quicker in the long run to have taken a longer route and avoid them completely. I rejoined the upper track just before a sharp bend with a bridge over the Allt Bad a Mhaim and then followed the long walk back to rejoin the Glen Lyon road before walking back down to the lower Glen Lochay road and along to the car. I knew this part of the walk would be long and it certainly seemed to be never ending. The benefit is that if it had been dark it would be an easy return route. Then home this time via Callander and the A9 which, even with the roadworks, was a wee bit faster than the A82.
Really must get fitter.....

Wow - the forecast really was absolutely way off wasn't it?

yup kinley - you win some, you lose some

I'm off to dust down the cross trainer......on second thoughts, it's a bit late for that.....now where's that Laphroaig gone

rockhopper wrote:yup kinley - you win some, you lose some

I'm off to dust down the cross trainer......on second thoughts, it's a bit late for that.....now where's that Laphroaig gone

Aye well - we dusted off our Beinn Each to Stuc a Chroin plan for sunday. Stood on Beinn Each at 0900 and went "sod that" (again

) and dropped back to the car.

kinley wrote:Aye well - we dusted off our Beinn Each to Stuc a Chroin plan for sunday. Stood on Beinn Each at 0900 and went "sod that" (again ) and dropped back to the car.

Sorry to hear that - I was a lot luckier with the weather last October when doing these two. I'd looked at several forecasts for Sunday and they all seemed to get it wrong

Seen the title and thought...aha some views....

At the bottom point at around 560m if I remember ( got no map for reference at this minute)
We still couldnt see diddly squat...not even the slopes of Heasgarnich

Excellent report Rockhopper. Nice to see these hills again. (although for the most part you didn't see anything

The undulating section of flattish Plain before you reach Coire Ban Mor was a complete bog when I done these in August. Looking back from Coire Ban Mor at the bog

You eventually got some nice views though

P.s if you want to see the views you mist (no pun intended)

On second thoughts, the end of my round was pretty misty up top.

monty - thanks, I'd read your report when planning and that's one of the reasons I thought of adding Cam Chreag but I took too long getting there on Sunday (and you walk through the hills instead of up them as was pointed out elsewhere on WH

Hmm, I seem to remember exactly the same view from Beinn Heasgarnich - I probably even have a photo of it somewhere in a box

Was just reminiscing about this walk last night actually. I did it in Jan '04 in very similar conditions. Only difference was I walked along the floor of Glen Lochay, as it didn't occur to me to use the hydro road. Had similar no views on Beinn Heasgarnich followed by some sort of clearing on Creag Mhor. Gave me a stinking cold so I had to have a couple of days off work afterwards

Well done, you are getting out & about a lot just now. I'm planning to do these in winter conditions probably next Jan, as you know i was on the other side this Jan. I did Sgiath the year before. Both my days were clear, shame for you, but well done on the effort of doing both in thoose conditions.

) but doesn't look like you had too bad a day

. I don't think I've seen an accurate forecast in the last month and didn't even bother checking it for Sunday

- which was clearly the right thing to do as it was dry, clear and just a little high cloud on Ben Vane (Loch Lomond).

I can sympathise about the knee as well - my left knee has been giving me a bit of grief recently (ever since Carn Bhac at New Year in fact).

malky_c wrote: Gave me a stinking cold so I had to have a couple of days off work afterwards .

"Ahh but a great excuse for hot toddies ! (not that I'd need an excuse though)

jonny616 wrote: you are getting out & about a lot just now.

Graeme Dewar wrote:I can sympathise about the knee as well - my left knee has been giving me a bit of grief recently

maybe it's an age thing Graeme once we get over 40.....but it's no excuse when it comes to changing nappies which you can always do sitting down