I'd spoken on the phone with the Estate sec and keeper in Glen Prosen and discovered that they had 4 stalking parties out on the hill and were busy for the next 2 weeks culling hinds. So I changed the venue for today to Meall Uaine in Glenshee.

The weather forecast was good, H was back from his holidays in Aberfoyle and the "Safari" boys - GordonC & Trevor - were in Braemar, so this worked out admirably. Picked up Harvey in Westhill, then GC & Trev in Braemar and headed over the Devils Elbow to park up outside the old burnt-out ruins of the Glenshee Hotel, only a few metres from the Cateran Trail. We tooled up and passed through the splendid gate on to the grassy path alongside the dyke. A short way up the grassy path, GC spotted a memorial stone, but we had great difficulty in reading it due to the lichen growing on it, which was frustrating to the historical members of our team. 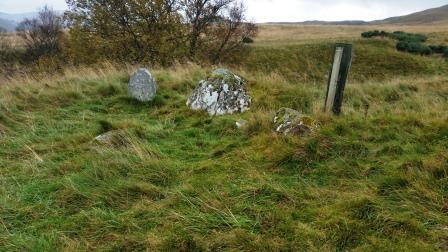 The illegible memorial stone by the Cateran trail

After we'd passed through another gate, we noticed an ATV track winding up the N ridge of the 784m top before Meall Uaine. I fleetingly considered taking this apparently shorter route up our objective until I recalled my appalling record on "shortcuts".
Nevertheless, I parked the idea as a possible descent route, then enjoyed the easy going up the Cateran Trail to bealach An Lairig. The tops of our hill were being dusted by clag, so we headed off along the fenceline on the S side as there seemed to be fewer fences to negotiate. There were nice convenient animal tracks alongside the fence/dyke which we followed. On the 784m top, the clag cleared momentarily, but before I could get my camera ready, we were enveloped again. The only hurdle we faced was a soggy peat hag between the 784M top and Meall Uaine. Everyone picked their own route through it with varying degrees of success and H was fairly clarted when he emerged at the other side.
At the top of Meall Uaine, we stepped over the fence to gain the pile of stones masquerading as a cairn. The breeze was a bit chilly, so after the summit snaps we retreated back along the dyke to take a lee. 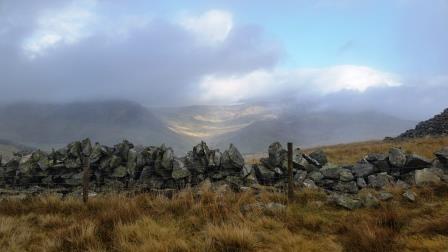 A fleeting glimpse of Glen Carnach from Meall Uaine slopes The "Safari boys" arriving at the top of Meall Uaine Harvey getting excited at the top of Meall Uaine

We had our piece, then creaked off down, lest we got too stiff to stand up again. We'd agreed to see if the quad track that ran alongside the N side of the fence/dyke connected with the track we'd spotted lower down, on the way up.
We emerged from the clag into a sun-bathed Glen Beag, so managed a couple of pics. Back out of the cloud looking across to Glen Carnoch 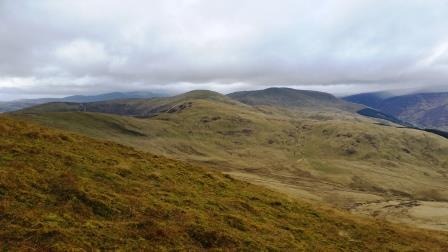 GC spotted a couple of hinds as we descended, but by the time I'd looked in the right direction, they'd disappeared round the corner......
Miracles sometimes happened - and the track we were on, connected to another heading into the corrie, which we followed for a bit.
Lower down, we crossed over the Lairige burn and back on to the bottom bit of the Cateran Trail, just as a curtain of rain mosey'd down Glen Shee. We just beat it back to the car - a rare occurence ! 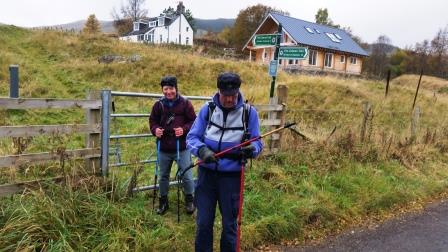 The GordonC & Trevor beating the rain back to the car

The boys celebrated with ribena - coloured fruity ciders in Farquarsons of Braemar, whilst I downed a few cups of coffee in sync.
We parted at the caravan park where GC and Trevor were in residence, having had a very satisfactory day. Thanks for taking care of me guys !

On the way home, just before Garlogie I couldn't resist stopping to take a pic of a black cloud with the sun illuminating everything bar the underside of the strip of cloud - sorry about the photography - it was actually better than the snap I took ! 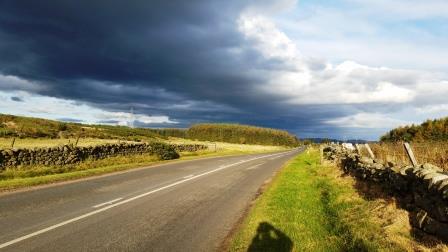 We live in a great country !