The telling of this tale (and its title) start with the events that occurred on the day before the walk took place. The clocks had gone back on the previous Sunday, and the forecast for the Monday was cold – hard frost overnight – but dry and wall-to-wall sunshine. Game on! With the precision of a military operation, I’d calculated my timings to maximise the daylight hours: leaving as daylight approached (6:45am) would get me to the Greenock Co-Op just as it opened (7am). Ferry tickets purchased (£19.30), a short drive to the terminal, arriving in good time to make the first crossing (7:30) to Hunter’s Quay, near Dunoon. Twenty minutes on the boat, ten minutes’ (or so) drive to the start point, and I should be walking by soon after 8am, giving me nearly 8 hours of walking time, which should be MORE than enough time to successfully complete the general route I’d horked from Johnny Corbett; I’d roughly calculated the walk to take 6–7 hours, and although I had built in plenty of buffer time, I was reluctant to delay my departure.

Thinking I was being very clever (Je suis tres intelligente, ne c’est pas?), I went out early to warm up the iced-up car before heading down to the shop to get my paper. I’ve done this before without any problem; I just have to remember to take two sets of keys. Without thinking, I unlocked the car door manually, and inserted the key into the ignition. It wouldn’t turn. I tried the second key, same result. Assuming that I must somehow have inadvertently reprogrammed the key (it’s happened before) or triggered the immobiliser, I began a series of locking and unlocking manually, locking and unlocking wirelessly—all of that with both keys—digging out the owners’ manual, asking random people in the shop and on the street (not many, at that time of day!) for advice, all the time getting more and more worked up. The sky lightened. My departure time came and went, and I resigned myself to a cancelled outing. I came inside to contemplate my next steps, thinking my only option was to call roadside assistance. As a last-ditch attempt to avoid that, I tried googling the issue. Funny that, the only advice regarding a “key not turning in the ignition” was a) a broken key—not the case, since neither key worked, b) a broken ignition system—ouch, sounds very pricey, or c) the wheels locked, wherein a simple jiggling the steering wheel back and forth should move the wheels enough to unlock the ignition. Of course, this last thing is something that I’ve known since I was about 16, and generally do it by instinct. I would have checked that that wasn’t the problem, right?

Back down to the car, insert the key, and wiggle the steering wheel. “Click” went the ignition, and started was the car.

I’d have been mortified had I called the AA.

I could probably have still made the trip, moving all of the timings back an hour, but I didn’t want to take the chance of getting caught out after dark. So I just moved the same plan to the next day, for which the forecast—luckily—was much the same as for the Monday. It’s not like I had to worry about work, or anything…

The plan worked marvellously. I got to the Co-Op about two minutes before it opened. I sat in the ferry queue for about 10 minutes. 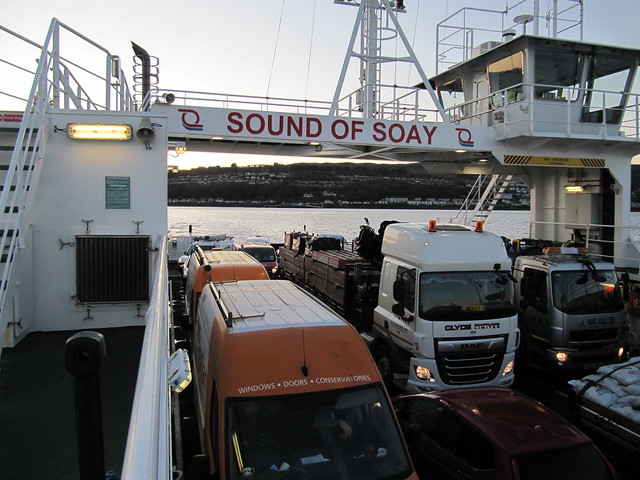 me and all the tradesmen (errr...persons)! 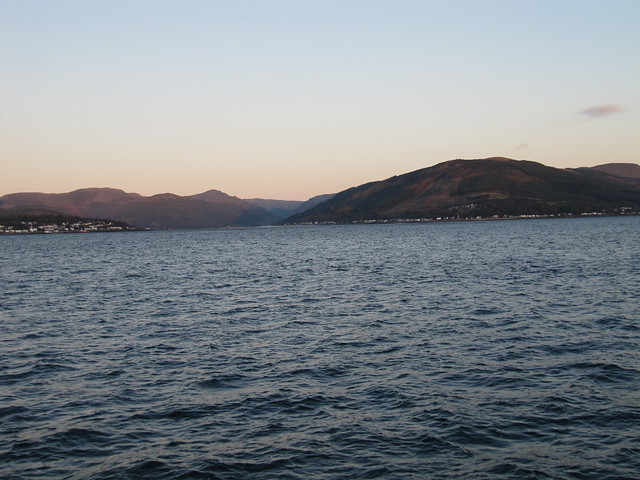 I'm sure one of them hills is mine, but I wouldn't want to venture a guess... 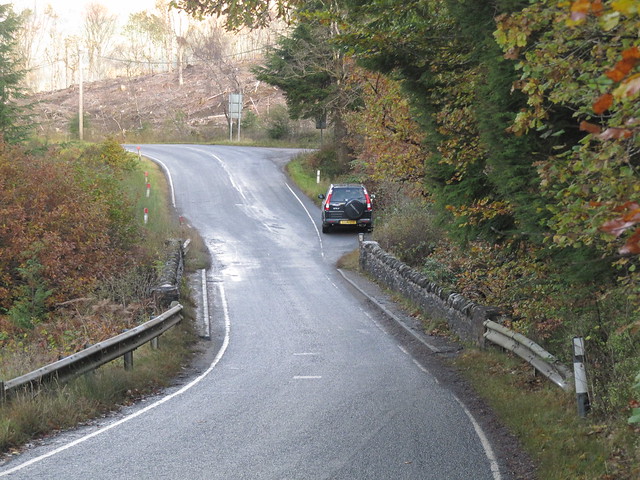 parked here, not entirely sure I wasn't in a passing place rather than a layby 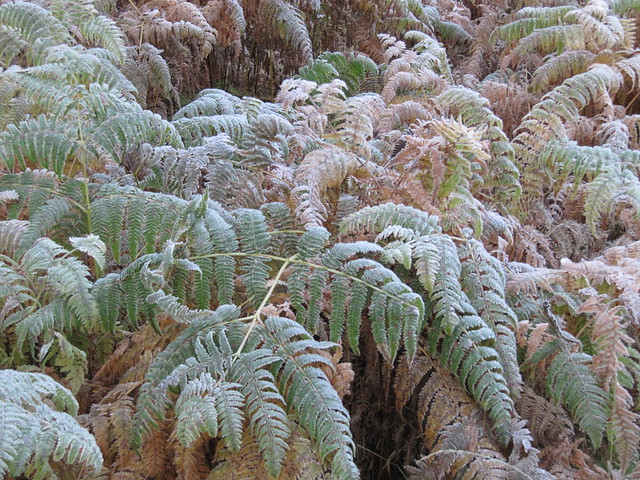 I was on my way up the forestry road a few minutes after 8am, after parking in a layby near the rumbling bridge. It was a lovely morning; cold and frosty again, but clear, with an abundance of blue sky. It took me about 45 minutes to reach the “Coffin Trail” sign at the foot of the Bealach na Sreine. 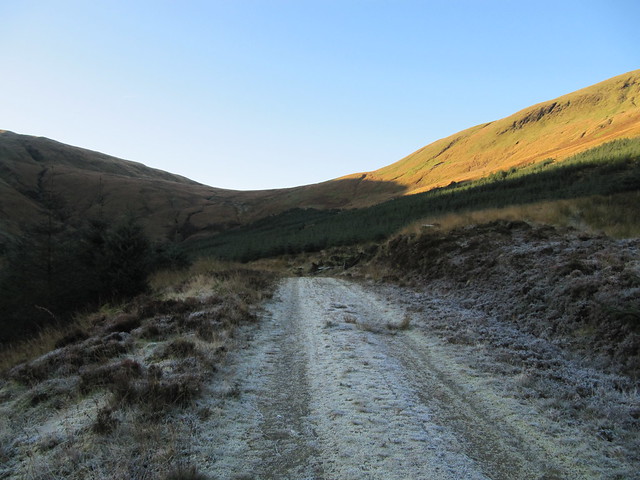 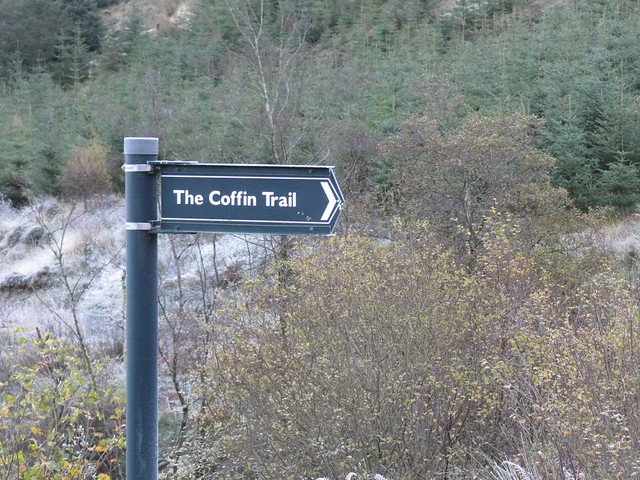 From the bealach (325m), it was a long way out to Cruach nan Capull, which I’d been prepared for. Just keep following the fence. I’d not been prepared for the very steep final ascent onto its summit, but it was short, and I reached the wee cairn (611m) just after 10:30am. I’d had good views down onto Loch Striven and up the Clyde toward Glasgow once I’d reached Green Knap. 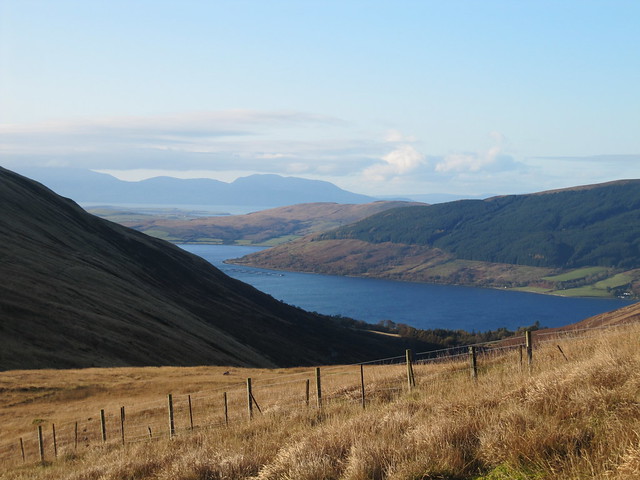 nice views kept me entertained; down Inverchaolain Glen, and across the water to Arran

There were good views from the summit as well, but the wind was icy, and I didn’t stick around for long before retracing my steps back to the bealach. 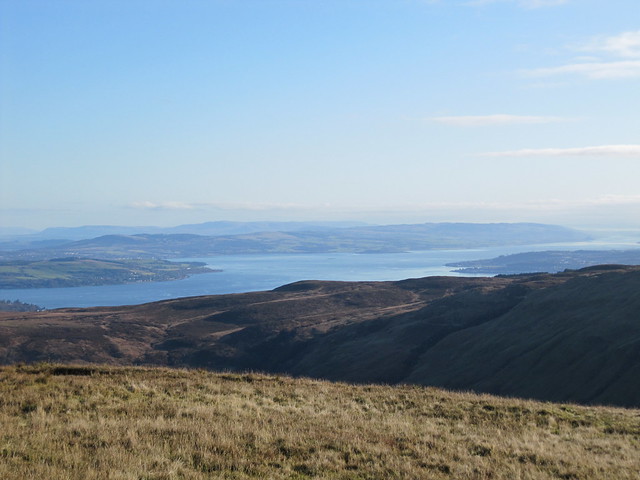 up the Clyde toward Glasgow 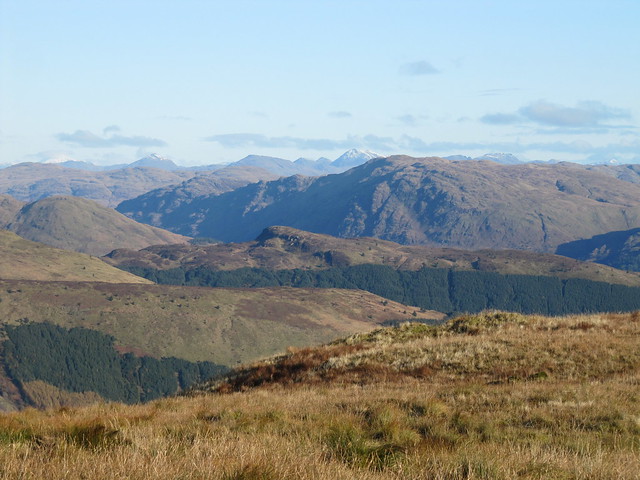 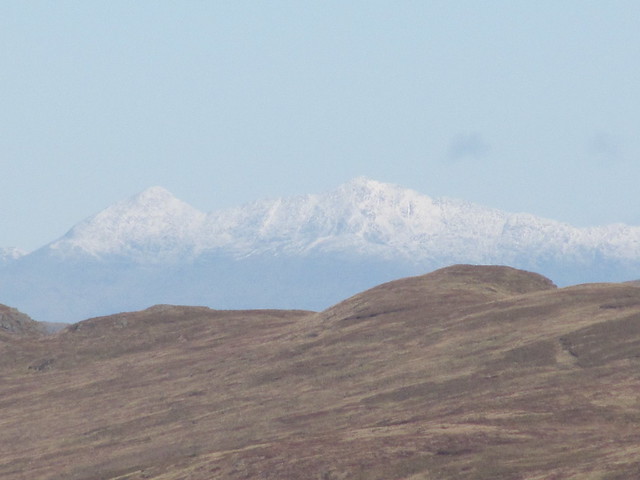 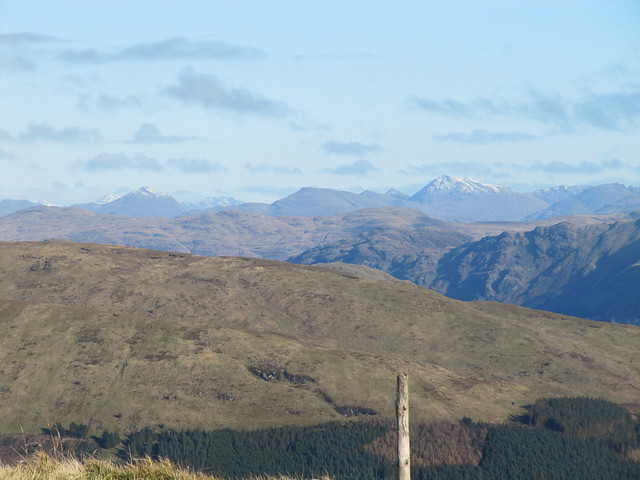 I haven't a clue as to what hills these are! 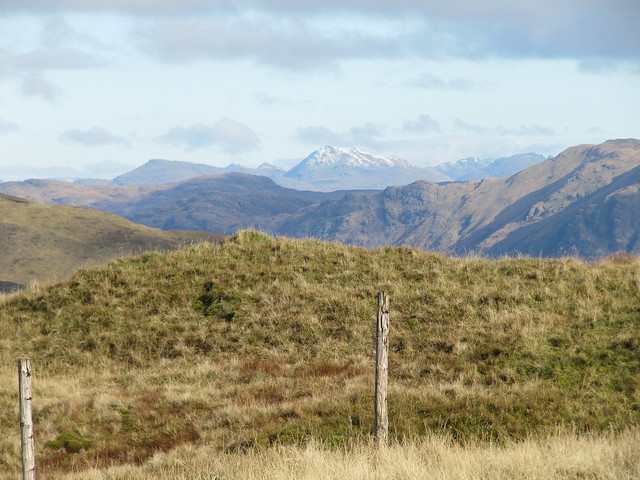 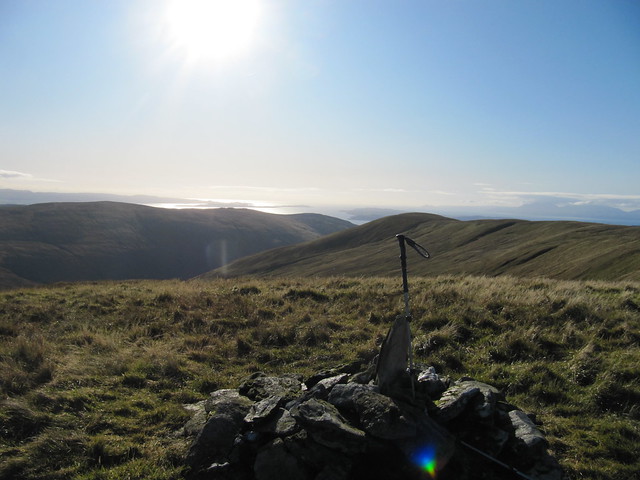 It was still before noon (just), so I had plenty of time to add on Black Craig, a sub2k that was less than 2km from the bealach and about 200m additional ascent. It was a steep slog up to around 500m, but thereafter, the terrain levelled out; I could see the summit in the distance. It was fairly squidgy. I’d read that there was a three-stone cairn that marked the high point, but I could find no evidence. It’s still there—somewhere—no doubt, but I’m satisfied that I visited each of the bumps that could have been considered the highest point. It’s getting marked as “done.” 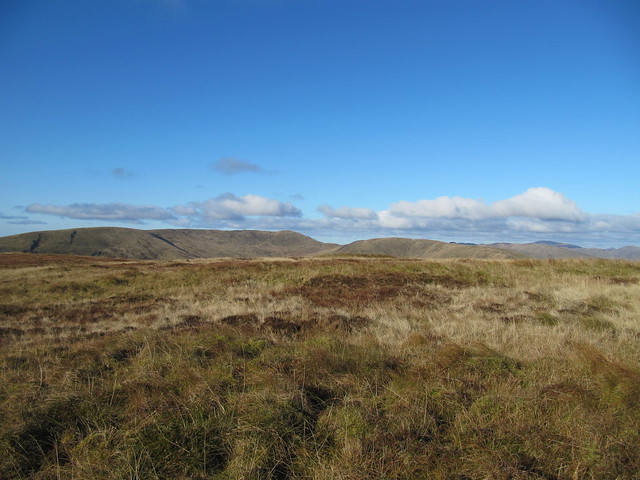 I returned to the bealach for the final time at 1:45, and made the steep descent back down the coffin trail, and made the long march back along the forest track, returning to the car at 2:30pm. By the time I’d changed my shoes and driven back to Hunter’s Quay, they were just beginning to load the cars on the 3pm ferry; perfect timing! I thoroughly enjoyed this little outing; taking a ferry always adds an extra sense of adventure. And it took only a bit more than an hour to get there.