Today is Moss' last day as Angus Ambassadog so we decided to finish on a high, literally, and head up the 2nd highest Angus peak - Mount Keen (Driesh is the highest but the road to it is currently closed). Nothing new for us here, this is the 4th time I've been up Mount Keen. It was Millie and Fly's first Munro (and mine!), Moss' first Munro so we are following that trend and it is now Zena's first Munro too. Clear track all the way, though there were some boggy bits on the first half of the track to Queens Well. Was glad I brought by Feetz for the first burn crossing, I have a thing about crossing water and they make me feel better! The second crossing there is a cattle grid type thing across it, not a problem for me or Moss but Zena slammed on the brakes. With sheep close by letting her off the lead to figure it out herself wasn't an option so I ended up carrying her across. Fortunately she is still light enough to carry easily! Then the ascent started, following the clear track up the glen and out onto the open moorland. Mount Keen was in sight, the clear path leading almost right up to the summit steps making part of the way a bit easier.

The forecast had been for winds of around 30mph, gusts of 40mph, but this was only really noticed on the very top where I could barely stand! Nothing new there though, I think I struggled to stand at the summit on the previous three occasions as well.It was just a quick few photos and then we started to head back down again. The dogs had a little summit play which was great to see. Moss used to always have a play with Millie after reaching the summit and now she has Zena to play with! Further down Zena found what I later discovered was a flattened plastic bottle and that provided them with some entertainment Moss chasing Zena for it. I retrieved the bottle once the game ended and put it in my bag to take down. I seem to collect a lot of bits of litter this way...

On the way back we stopped off at Queens Well before continuing on back to the car park. There were only two other cars there when I arrived, on my return my car was all by itself!

Not the most exciting of Munros, but at least there was no snow up there like there was on the other hills we could see in the distance and it is a nice, simple route. Walking through the glen My Feetz keeping my feet dry! Zena had to be carried across this 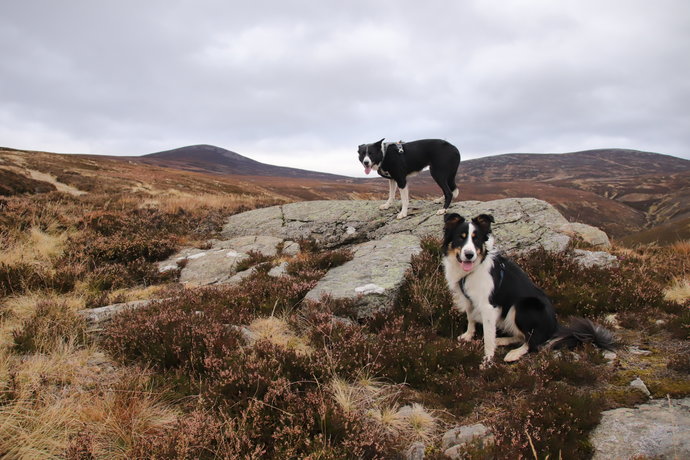 Posing, Mount Keen to the left. At the summit, it was a bit windy! Moss chasing Zena for the bottle