Going to Extremes to Truly Compleate the Donalds

Going to Extremes to Truly Compleate the Donalds


In October 2017 a wet Cauldcleugh Head saw Jaywizz and I complete the 69 main Donald summits listed by Walk Highlands. To truly complete the Donalds, as pointed out by keeper of the list Dave Hewitt, the 51 subsidiary tops should also be visited. Since I had only noted 26 of them in my log I had 25 left. This October I finally compleated.

It has been fun collecting the missing tops. Many of them lay around the periphery of a group of the main summits, so bagging them efficiently involved climbing the others for a second (or third) time. For some I added on the extra summits anyway and was rewarded by better weather and actual views instead of swirling mist. In total contrast on one the weather was so foul I contented myself with a dash into the spin-drift followed by a rapid wind-assisted descent. This trip was memorable for another reason. Back at my car I thought I'd dropped my car keys somewhere on the hill. They were nowhere to be found in any of my pockets. After some panic-filled minutes I was very relieved to find my gloved hand had placed the keys into a very large non-pocket by mistake, and a lump at my ankle proved to be them resting inside my salopettes!

My pre-walk research revealed that I might not have climbed all current 89 main summits. I found that one summit (Black Law) had swapped positions with its nearest top. Doubting my original notes I included both in my list. In all those 26 tops involved visiting 49 summits including an extra four in the Cheviots. I gradually reduced the 26 down to single figures, then, by this year, to a handful - five. By that time I'd realised that by concentrating on groups of tops and those closer to home I was about to compleate by visiting the four most geographically extreme tops - the furthest north, south, east and west, though not in that order.

Extreme West - In late February this year, an unseasonally hot sunny day found me enjoying a gentle stroll up Caerloch Dhu, the Northern top of Shalloch on Minnoch. There wasn't a scrap of snow to be seen anywhere and I resisted the temptation of continuing to the main summit and instead went to visit Loch Doon Castle and climb the sub-2000 Craiglee.

Extreme North - In mid-April on another warm day I collected the missing top of Meall Clachach in the Glen Artney Hills. Not quite the most northerly top because that is Beinn Odhar about 2.5km to the east, but I did that again anyway then renewed my aquaintence with the amazing maze of peat hags on Beinn nan Eun.

Extreme East - This is Cairn Hill - West Top, and is not a real summit, but the highest point on the Scotland-England border. Early versions of Donald's Tables included a Section 12 - Cheviot Hills. That section was removed in the 1997 edition with its Scottish components combined with Cauldcleugh Head in the enlarged section 11. The weather had been deteriorating when I'd visited Windy Gyle and I'd resolved to return in better conditions and visit The Cheviot as well. Near the end of May good weather encouraged me south of the border into the Harthope Valley for an anticlockwise circuit of The Cheviot, Cairn Hill, Auchope Cairn, Comb Fell and Hedgehope Hill. In my 1969 edition of Munro's Tables only Auchope Cairn was listed as a Donald (a top), Cairn Hill wasn't there at all and the other three though listed were not included in counts of summits or tops. That walk was the most populated of all my Donald-bagging trips except perhaps for The Merrick. I resolved to return and climb the other two hills in the old Section 12 later. This walk did show not to rely on the paths on the present Walk Highland OS 1:25000 map, especially those from Hedgehope Hill back to the start. Thoce shown are no longer there and new routes have replaced them.

When I'd climbed Cairnsmore of Fleet with Jaywizz in 2016 I'd been quite happy to leave its two tops for later, and now the time had arrived. I waited until the forecast for the next day looked good and set the alarm to 6am. That got me to the usual parking spot a little before 10am to find only two cars ahead of me with one pair of walkers getting kitted up. My boots were already on and all my gear was ready so I was off before them. They pursued me along the flat and as the main ascent began I stepped aside to let them overtake and accelerate ahead. Looking back at my route as about to ascend into the cloud.

I lost them as we ascended through 600m into low cloud but saw them again as I reached the summit cairn and they vanished into the mist heading for Meikle Mulltaggart. Mist clearing at the summit

On the downhill stretch as I emerged from the cloud I saw them ahead of me as I found the ATV track I'd read about and then spotted on Google Maps' satellite view. Looking ahead to my pacemakers and Meikle Mulltaggart

It led me to the stile over the fence that crosses the col then then uphill to near the top where I met my pacemakers as they returned. My Garmin then took me to the reported summit location - NX 51198 67806. Almost any spot within a 20 metre radius looked equally plausible as I wandered around it. The cloud was lifting on my return to the col, and Knee of Cairnsmore was almost in the clear when I passed the lead pair enjoying a snack near the stile. I plodded uphill on the ATV track longer than I should have and realised the others had followed a more direct path beside the fence on their way to the Knee. Result was I was a few minutes behind them as I reached its summit ridge. I made sure of visiting the reported summit location - NGR NX 50974 65624 - on my way to the prominent cairn. This is about 230m further south and its top is obviously higher than the summit. Chatting to my pacemakers I found that while I'd just completed my first round of the Donalds, I was in the company of one who had just one more to compleate his second round. It was nearby and he intended to visit it the following day. I wished him well and that the weather did not turn out to be as bad as the Met Office had promised. Cairnsmore of Fleet summit now in the sun from the Knee of Cairnsmore Cairn.

While I sat down for lunch they set off southwards to hit a track that would take them back to the start. I hadn't investigated alternative routes and I backtracked to Nick of Clashneach then contoured across to use my ascent route. Afterwards I measured both and realised I would have saved almost half a mile by taking their southern route. Something to remember for next time. I did however meet a small herd of goats on my route and a runner on his way to repeat my route with two black labradors as his pacemakers. Back at the start with my pacemakers already gone, True, Lob, Ext and their friends wandered across to give me a short inspection before they sauntered off. Inquisitive locals at the car park

An excellent day to finish my round.

Re: Going to Extremes to Truly Compleate the Donalds

Many congrats, I had to look back and see when I did Cairnsmore and looking at the photos again it was a cracking day. 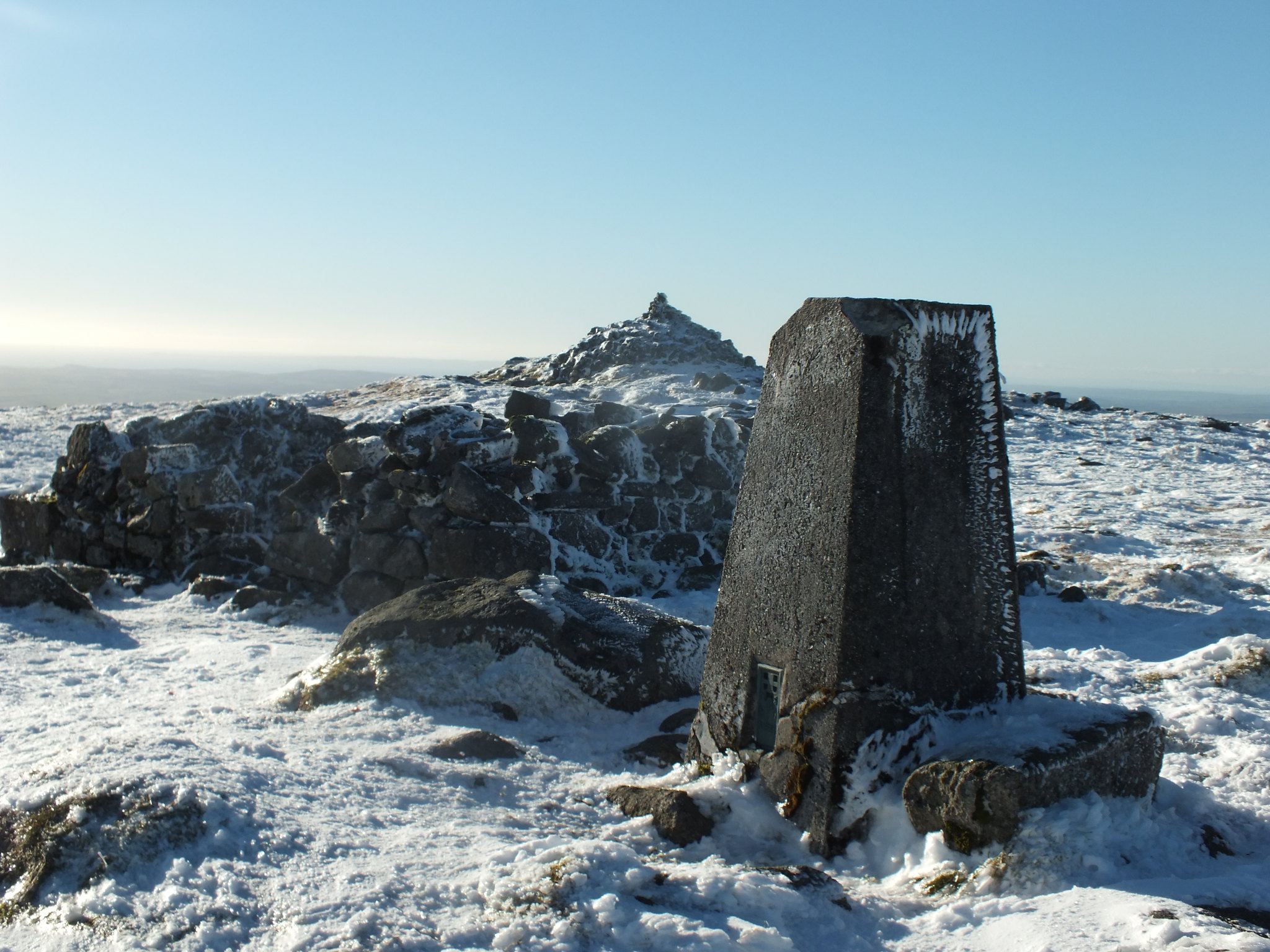 Re: Going to Extremes to Truly Compleate the Donalds

Fife Flyer wrote:Many congrats, I had to look back and see when I did Cairnsmore and looking at the photos again it was a cracking day.

You definitely chose great weather for your first visit. Good luck selecting a similar day when you add those missing Donald Tops to your CV!