We climbed Sgorr Ruadh 3 weeks ago (it was the weekend before WH Meet) but I was so busy re-posting my old broken reports, that I completely forgot about this one. So here it goes.

It was our last hill climbed in autumn conditions, before the first snow covered the tops of Scottish mountains. Sometimes the "autumnal" climate lasts till January, but this year we seem to have an early onset of winter over the hills. It fills me with hope for a better winter than last year.

Climbing something Torridonian every fall has been our tradition for years. Last year we re-visited Beinn Liath Mhor on a beautiful November day and since then I couldn't wait to repeat its neighbour, Sgorr Ruadh, in similar conditions. Our first visit to this hill was an unforgettable experience. We got to the summit thinking we were going up Fuar Tholl

It was the only Munro in our career we climbed by total accident. Occasionally, we add an extra hill we didn't plan, but this was a whole different story. We didn't see much from the summit though, due to clag, so we wanted to repeat it on a good day. And here it was.

We aimed for the classic traverse of Sgorr Ruadh, crossing River Lair and going up the path to the col between Sgorr Ruadh and Fuar Tholl, then climbing the latter, traversing it and returning via the upper Coire Lair. A beautiful circuit, which could be easily extended by adding Beinn Liath Mhor, but we decided one Munro was more than enough today and just did it at a lazy pace.
River Lair could be a pain to cross in spate, but it didn't present a problem today.

Track_SGORR RUADH 17.8KM.gpx Open full screen  NB: Walkhighlands is not responsible for the accuracy of gpx files in users posts
The walk starts in Achnashellach and for a short time, follows a good track: 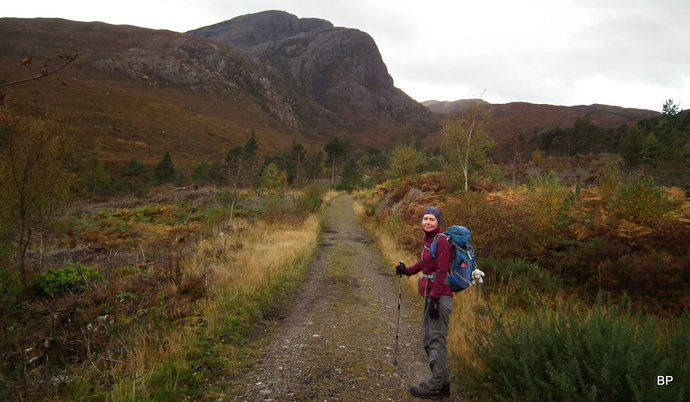 Overall, this area has a good network of stalkers paths, these days used mostly by hillwalkers. Even just walking up to Coire Lair is a delightful experience. After the initial climb to the upper glen, the great panorama of Coire Lair is always a revelation. The three mountains: Beinn Liath Mhor, Sgorr Ruadh and Fuar Tholl, encircle the corrie and give you the impression of being completely surrounded... Beware, walker! You're entering the inner sanctuary of Torridon!

Close-up to our target, Sgorr Ruadh, looking straight up the Robertson's Buttress:

Of course, we didn't aim for a rock climbing route today! Panther was eager to inspect the River Lair in search of a suitable crossing: Once a good set of stepping stones was found, it was time to hop across: The day was shaping up nicely, some cloud to the south and east of us, but there was blue sky the north and west of where we were. A bit windy and the wind had a chilly edge to it but we brought hats, gloves and warm fleeces, so we were not deterred by the gusts. Anyway, at the moment we were in lee of Fuar Tholl, so we didn't even feel the wind chill.
On the path below Fuar Tholl: Looking south to the peaks of Glen Carron: Fuar Tholl always impressive, especially the Mainreachan Buttress. We have done it twice already and we'd love to return again! Possibly next year in autumn.

Actually, as we walked past the northern shoulder of the mountain, I started to wonder, if it would be possible to somehow clamber up the scree to follow the upper ridge to the summit? Looks very steep but on a dry day it might be doable. I checked WH reports, but nobody had climbed up this way, it might be an interesting experience though

Something to look forward to for our next visit.
Our possible route would be up the left-hand side of this slope, avoiding the crags. Is it too steep to risk it? Of course, it was just a thought, but I shared it with Kevin. Sure, he is The One Who Always Knows It Best, so he would be qualified to cast a judgement!
Kevin expressed his doubts about the slope "looking a bit dodgy", but he was hooked on the idea, too. So... wait till next year, you might be surprised

Back to today's target. We reached the high col between the two mountains. A quick 10 min snow shower came and went, the flakes melting as they fell, but the first signs of winter were definitely in the air!
Our target behind me:

I didn't remember anything about a path up Sgorr Ruadh from the col (we descended this way in winter, so it was all covered in snow) but I managed to locate a small cairn marking the turn right for the Munro. We tried to follow a faint path, but it soon occurred to us that in this world of lochs and lochans it was everyone for themselves, so we simply aimed for the summit and marched across, stopping occasionally for photos: Fuar Tholl across one of the many lochs: The final 150m of ascent is again steeper and there is no path, but the hard work was rewarded with lovely views, including those down to Loch a Bhealaich Mhor: Close to the summit we saw two other walkers going in the opposite direction, but the whole area was surprisingly quiet. I expected hoards of people on such a nice, sunny Sunday!
The final climb to the summit, the northern cliffs of Sgorr Ruadh in the background: The summit is surprisingly small, with a large stone shelter taking most of the space on the top. There was just about enough room for one Panther and one Mountain Lamb

Lucy ticked off her 121st Munro: The summit was a bit windy, but we spent some time here, simply couldn't resist it. This Munro is an amazing viewpoint (just as much as any Torridon hill) and I was so glad we cam back here to admire the vistas, after the cloud-and-snow experience in 2011...
Panoramic views of Beinn Liath Mhor:

The full western pano, including our descent route:

Maol Chean-dearg, An Ruadh-stac and Beinn Damh to the west: Fuar Tholl to the south: 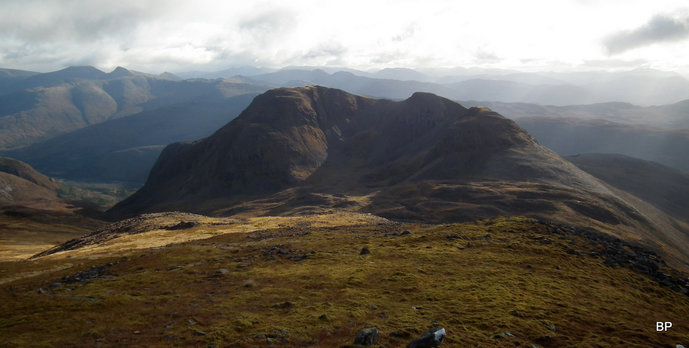 To the NW, the Torridon giants: Beinn Alligin and Liathach: Our plan was to descend the NW ridge to pick the path in upper Coire Lair. This route is used for the full traverse of Sgorr Ruadh and Beinn Liath Mhor, so we expected some kind of path all the way down (last time it was all buried under snow). The initial descent is quite rocky, and at some point I started to wonder how the hell did I manage to get up this in full winter conditions, when I was an inexperienced mountaineer and hardly knew how to use my crampons Kevin just shrugged: that only proves the point: you're better than you think!
Of course, he is right. The One Who Knows It All Best has spoken!

The northern ridge is a lovely way to traverse the mountain, once past the tumbly path on the initial descent: Looking back to the summit and the edge of Raeburn's Buttress: A path can be followed all the way down, a bit less obvious in places, but in good visibility it is easy to follow the ridge down:

Panoramic views on the descent - the trio of Maol Chean-dearg, An Ruadh-stac and Beinn Damh again:

The return walk via Coire Lair was a delight, we took time and enjoyed both the views and the sunny weather. I can never get enough of Torridon and the southern side of it is one of my favourite places. Nowhere near as busy as Beinn Eighe/Liathach/Beinn Alligin trio but just as entertaining. Now that winter has arrived it is time to dig up crampons and ice axes! I can't wait for some proper winter fun. So far we had a first taste of it on Sgorr na Diollaid during the WH Meet, and a short but freezing experience in Assynt. The report on Cul Beag will come soon.

I love your regular Torridon reports.Torridon is a part of Scotland that just keeps pulling you back to explore some more. I've walked over and around most of these mountains and could never get bored. I find the vast areas of exposed rock inspiring and awesome.

Border Reiver wrote:I love your regular Torridon reports.Torridon is a part of Scotland that just keeps pulling you back to explore some more. I've walked over and around most of these mountains and could never get bored. I find the vast areas of exposed rock inspiring and awesome.

We are lucky to live so close to Torridon! Even after multiple visits to each mountain, there is always something new to explore. The Loch Coulin/Achnashellach area is perhaps less frequented than the main peaks of Torridon, but every hill offers a superb day out. Even the forgotten Grahams or Subs (like Ben Shieldaig) can be a breathtaking experience.

Believe or not, it's a view from a Sub!

Love that area. It's also where three people I know lost their lives, including Kath Irvine who I met through Walkhighlands and shared many a walk with. I often wonder if I'd be with her that day she didn't return would the outcome have been different. Miss her still.

There are many worse things to be addicted to! 100% my favourite hill place in the world, Coire Lair. Not the most spectacular, with the best scrambling or spectacular rock scenery, but a place with the best views in Scotland, with magical hills that are each different from the next, and just that little bit "off the beaten track".

Funnily enough, I've never done Sgorr Ruadh that way round. Done it the other way round several times, and as part of the "round" of all the hills, and also by the big gully up the middle of the face in winter (fabulous, relatively easy, if the conditions are right and the cornice small!).

We looked at going straight up Fuar Tholl to the left of the corrie last time I was there (winter), but decided it was too steep in snow, and went up the back of the corrie. https://www.walkhighlands.co.uk/Forum/viewtopic.php?f=9&t=78889

The view to Maol Chean-Dearg from the summit of SR with the sea behind is, in my opinion, one of the finest in these isles.

Thanks for sharing, as always. Jealous. As always!