My days of climbing big hills started to fade a while ago but I have persevered with walks that are perhaps a bit less strenuous but still interesting and thought it might be a good idea to start posting some of those that are not already on Walk Highland in the hope that other like minded folk might want to try them. Unlike most walks on this forum this is not a record of one particular day’s walk as I have done this one a fair number of times.

The Manor Valley is, I think, one of the most scenic places in the Scottish Borders and can be found a little way past Neidpath Castle just west of Peebles. This is a circuit from Hallmanor, which is about halfway up the valley, up to Dead Wife’s Grave, Hunt Law, Posso Rig and back to Hallmanor with the option of taking in The Scrape and Pykestone Hill.

Drive a couple of miles west of Peebles then take a left down the unclassified road signed to Kirkton Manor and over the Tweed. Continue on up the valley road for about 3.5 miles and as you pass Castlehill steading and stables the road swings right and a superb view to the head of Manor opens up. The parking space is about 100m beyond this corner beside the gate to the forest track at grid reference NT212353 (yes folks, this is old school navigation). Interesting fact is that Scott Brash MBE, the World Ranked Number One and Olympic gold medal winning show jumper trained at Castlehill stables before he moved to a base down south just a few years ago. 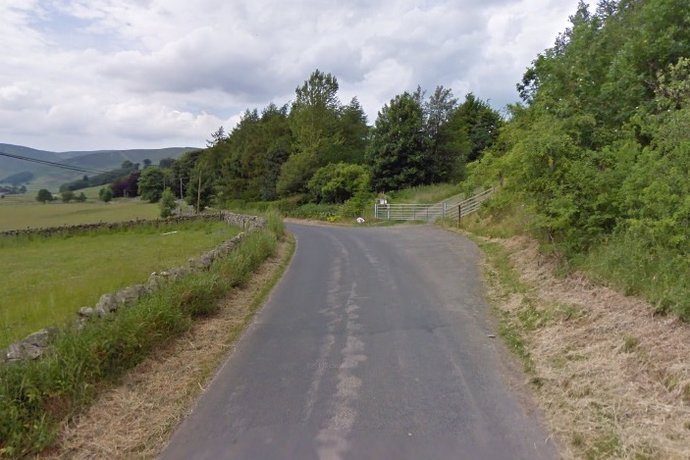 Parking and gate to forest track

From the parking space you simply follow your nose up the forest track which gently rises above a small man-made loch behind Hallmanor House and from there its on up the track for just short of 1 mile when the track swings left over the Dead Wife’s Burn and about 100 yards after that you make a 90 degree right turn (west) up the side track at 199348. You are now on an old Drove Road that connected Manor to Stobo and beyond.

The forest track rises ahead of you and no doubt you will be pleased to know that this is the steepest part of the whole walk. The track then levels out and gently rises through the forest to exit into the sunshine at Dead Wife’s Grave, which marks the junction of the parishes of Manor, Stobo and Drumelzier and is supposed to be the site where a fugitive from the battle of Philiphaugh (1645) was done to death. Pass through the gate and stop to admire the fine views over hills beyond Stobo and up and down the Tweed valley. Immediately turn left (southish) staying roughly parallel to forest fence/dyke following whatever paths you can find through the heather as the ground rises steadily towards Hunt Law and then to Lour Burn Head at 183341. At this point the path contours across the hill cutting off the corner that is Breach Law. You are now on the course of the old Thief’s Road which linked Stobo, an important ecclesiastical centre, down to Megget and beyond. So called because it was used by the Border thieves who came and went between the upper reaches of Ettrick and Tweeddale. James V and Mary Queen of Scots are recorded as having travelled this way so you are walking in the footsteps of monarchs.

The path once again approaches the woods and your route is through the gap between the trees directly ahead that is accessed via the wooden gate (or just step over the remains of the fence). The clear route zig-zags through the trees following the line of the old road and again emerges into the open below The Scrape. For those who wish to take in a Donald or two follow the fence line upwards about 50m then pick up the footpath that contours across the hill SbySSW and take in The Scrape (which was a Donald when I first done them but is not on the WH current list) and Pykestone Hill but if you want an easy life turn left, east(ish), downhill at the fence line and follow the edge of the forest. Its all downhill from here!

There’s a quad bike track about 30m beyond the forest boundary fence which makes things a bit easier for a while. Continue following the fence line downhill on to Posso Rig with fine views up and down the Manor Valley and over to Glenrath Heights. 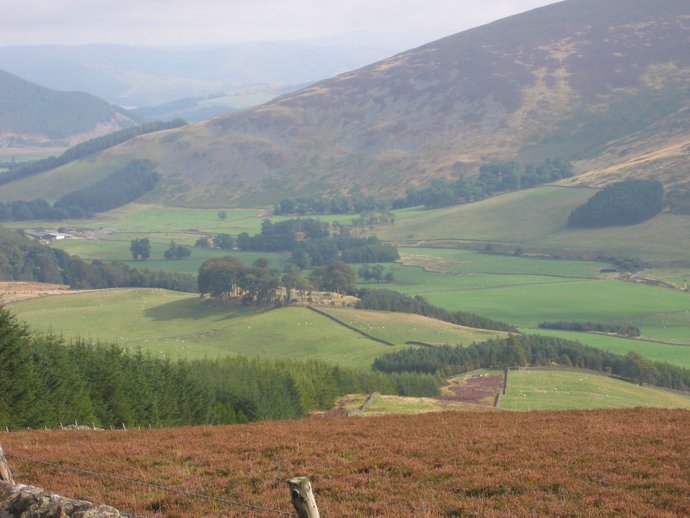 Continue all the way down until you meet the Dead Wife’s Grave drove road path as it comes in diagonally from the left and head steeply down between two dry stone dykes to the public road, passing three old Larch trees which in spring produce amazing bright purple pine cones. At the road turn left and its a short mile back to Hallmanor along the single track road and your car. Have a nice day…………

Beautiful photos - I must give this walk a try sometime!

When we climbed Pyestone Hill we met up with a Walk Highlander. He made the pathetic excuse that he couldn't join us for the walk as he had forgotten his legs. I expect that's what he tells everyone he has met on line but doesn't like the look of when they appear 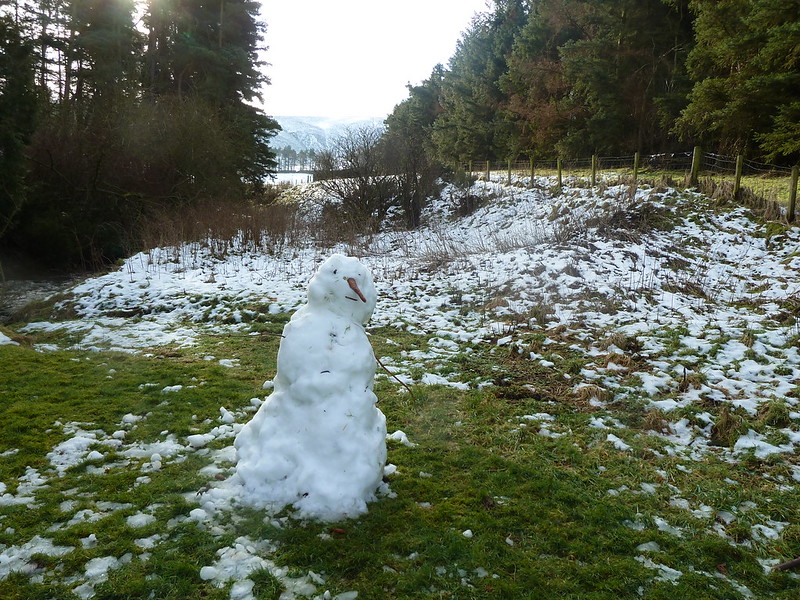 Hello, This area was our the first walk on hills outside of the Pentland hills when at school. Bus down to Peebles and the walk out along the Manor valley. Plenty of time to look around when walking and I recall the Black Dwarf's cottage who was more than a character in Walter Scott's stories when we saw the tiny cottage with the very low door for access.
Camp at the end of the valley and heading out over a few smaller hills to reach Broad Law that we thought was the highest Scottish hill South of Edinburgh...Merrick, at that time was unheard of.

Down to Talla Linnfoots and out to Tweedsmuir for a bus back home.

Hi, The Black Dwarf's Cottage is of course still there at Woodhouse Farm. Anyone interested can look it up here https://canmore.org.uk/site/51340/black-dwarfs-cottage. The real 'Black Dwarf' was one David Ritchie or Bow'ed Davie so called due to his deformed legs. When he was a young man Sir Walter Scott met Davie and as you say he subsequently used his character in one of his stories. He had the low-door in his side of the cottage so visitors had to bow down to his level when entering and his sister, who was of normal stature, had a standard door on her side (see the Canmore image).