For my second day-long hike, I needed an option that took me well outside of my Edinburgh hometown but with enough public transport availability to return on the same day. When I read about this route, I wanted to make it work. I was more prepared than I had been for my previous long walk attempt, even buying a pair of boots! Unfortunately (and despite trying on 5 or 6 pairs before purchasing) a slight nagging heel slippage the night before made me decide to leave them at home and opt for my running shoes again, ultimately to be returned.

Studying travel options to St Abbs, my best bet was the £8.40 Borders Bus day-ticket. The 253 left Edinburgh Bus Station at 8am and arrived at Eyemouth by 10am. A quick change onto the 235 saw me reach St Abbs just after 10.20.

My first day walk took way longer than expected, so I was determined to set a quicker pace this time around, not to mention catch the last bus home from Cockburnspath after 5pm. If I missed this, my back up plan was a taxi to Dunbar and train to Edinburgh from there; an additional expensive option I was not too keen to pursue.

St Abbs at last! And what a beautiful village. I hadn’t realised Avengers: Endgame used St Abbs as the location for Thor’s New Asgard so it truly was a cinematic beginning. Thor’s Gaff (in the distance)

Two couples got off my bus looking like they were heading in my direction. The small harbour was very active on arrival. I guess the film brings additional visitors these days. A large group of divers gathered in the car park. It was a breezy, dry day and an incredibly inviting landscape. One couple set off ahead of me with a proverbial ardent stride. I had pace setters to help me catch my bus home! Glancing at the harbour behind me, I got a sense of the earlier section of the Berwickshire Coastal Path that I’d skipped over - at least for the moment. Maybe one day soon. I was dawdling again and reminded myself to get a shift on. As you leave the harbour behind, the coastal path edges inland ever so slightly, merging into a pleasant green undulating section before climbing up to St Abbs Head and its lighthouse. My pace-setting couple had sat themselves down so I figured this would make a good stopping point for a banana. I nipped ahead of them whilst they lingered a tad longer. By now the breeze was whipping into the occasional gust. The vantage point offered little shelter but the view had been worth it. The best, however, lay just around the corner.

After the lighthouse, the route unfurls. Turning the bend, the next section comes into view with a magician’s flip of a cape and a proud “TAH-DAH!” It is truly breathtaking.

If I have one regret, it was not staying a while longer at this spot to slowly sip on the scene in front of me. I did linger, but the landscape offered up so much, I could have parked my backside for a good hour easily. I was at a neighbour’s funeral the day before and had learned he had been a keen walker. I knew he liked the outdoors but hadn’t appreciated just how much. I wished I’d packed a hip flask to toast this scene in his memory. In absence of a malt, I spent some quiet contemplation time instead. So, for you Nicol. Look at that strata! Caves under the folds

The climb up and over Pettico Wick is steep, hard going but invigorating. Once you reach the top it soon levels out and you pass a couple of sets of admiralty distance poles that measure a nautical mile. I lost track of the path just after this section and it took a wee bit of field wandering before I picked it back up again. The area has most excellent feature names such as Snuffhole Stells, West Hurker and Meikle Poo Craig (they made me chuckle anyway!) 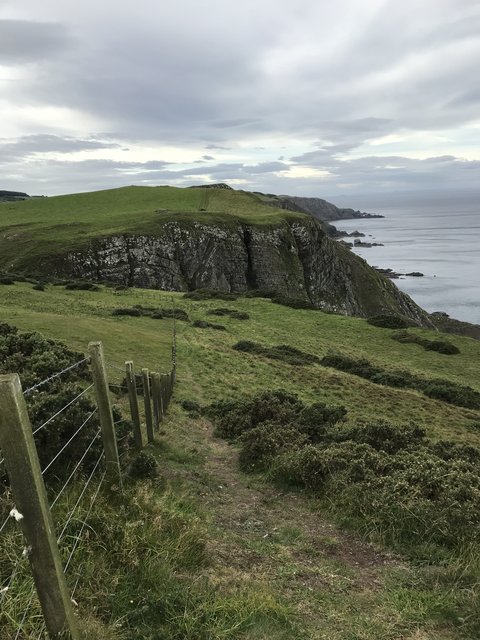 Climbing down was tougher than expected in my running shoes and I found myself practically sprinting down a particularly steep section, using my soles to cushion the impact. I admit being worried about my ankles surviving this steep descent. However, survive they did, and I promised to get myself something with more ankle support for my next outing. I stopped for lunch just after Dowlaw, where some rusting industrial vehicles provided some makeshift picnic furniture. Conscious of my last bus home though, it was a quick snack and I was soon back on the path. Pathway to the sea Have a gander and tell me what they are...?

Between Old Cambus East and West Mains I disturbed a gaggle of I’m not sure what (they did look like some kind of geese but with distinctive red/brown markings). Due to the enclosed road I unwittingly chased them for a good 100m before they broke off into a field through the first hedge break they could find. They were very speedy! The route cuts back toward the coastal path but the sea is obscured by a hilly section. I hesitated at the car park signposting Siccar Point wondering if I had time for a visit. I have fond memories of a S3 Geology trip there, the vertical uplift rocky outcrop something to witness. Having just walked from St Abbs to here, I now realised how geologically rich the whole area is, not just Siccar Point. A little Lego brick in my brain clicked into place and I wondered why I hadn’t explored more of this area since. Conscious of time I reluctantly deferred a second visit.

Literally back on the coastal path, Pease Bay caravan park bagsies a decent stretch of golden sand, wedged between cliffs. It gets a lot of stick for being a blot on the landscape but my Auntie and Uncle once had a caravan there donkeys' ago. I had completely forgotten about the ford at the entry. Funny how seeing this unlocked other memories from my childhood, suddenly loosened after all this time. 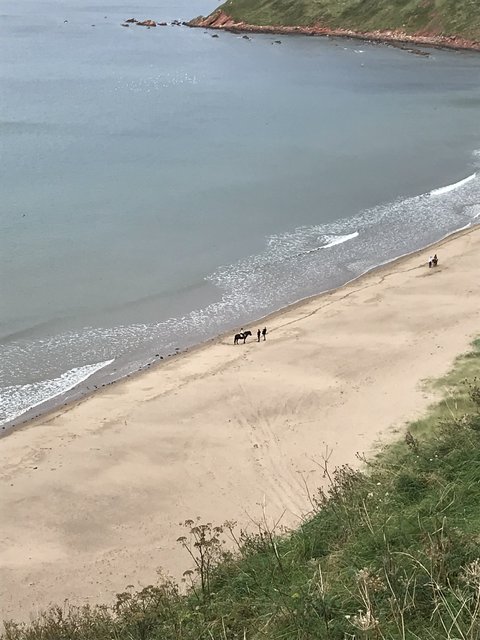 On to the final furlong now. Although the scenery is less dramatic it’s still impressive. Torness looms large in the distance. Torness in the distance The last hurrah of this scenic part of the coastal path is at Cove Harbour. The whole walk topped and tailed by picturesque harbours (this time minus the superheroes). After Cove the route heads inland. This was a tremendous walk; inspiring and visceral. To reach Cockburnspath the walker has to follow the underpass below the busy dual carriageway. I loved the sentiment of this graffiti greeting me at the final stage - if not necessarily the spelling. Steps for the walk

As it turned out I was a good hour and 45 mins ahead of schedule. I probably could have visited Siccar Point after all. Never mind. Luckily I had packed a book to read. Whilst waiting at the bus stop, a hedgehog wandered into the middle of the road. I tried to usher it back to safety completely forgetting my primary school hedgehog response training; as I tried to intervene it went into complete lockdown, simply curling up and waiting for me to leave. It took a good 10 minutes of gentle nudging and occasional traffic waving before it gradually pattered back to safety. Operation Hedgehog Rescue complete. Waiting for the bus another hiker arrived. He has been walking 1000km a year for the past few years and had just completed the Lauder to Cockburnspath stretch of the Southern Upland Way. Hmmm. I think I should read up on this route too...

Your pictures of the rocks at Petticoe Wick are amazing, and yet I don't remember them standing out at all when I walked past! There's another great stretch between Burnmouth and Eyemouth, though, and some good arches just north of Berwick.

It often seems to be easier in that part of the world to book a cheap advance train ticket to/from Berwick and get the bus from there - not quite as good value as the day ticket, but it allows an early start, or avoids the rush for the last Edinburgh bus...

Thank you! And I really appreciate the tips. I honestly thought the whole area was stunning. I originally intended to start from Berwick but engineering works on the east coast put paid to that, hence the alternative. I really want to complete the whole stretch - and I’m vaguely familiar with Berwick but not much beyond its centre and the caravan park! Next time I shall start from there.

I really enjoyed your blog, thanks very much. Great photos, just the right length, amusing and informative. I looked to see how long it took you, but didn't quite get that. (I will look again.) It was well worth reading anyway. Planning to do it (the final of 3 stretches - the other 2 have been blogged!) on Sunday, come rain or shine. Wish me luck. Thank you for saying - very kind! Looking at the time stamp on my photos, it took me 5 hours 20 mins, but there were parts uphill where I went quicker than I really should have; I was adamant I would catch the last bus - but to the detriment of a more leisurely walk sooking it all in! The views really were spectacular- you will love it no matter the weather. Watch yourself if it is wet as I’d imagine it would be easy to slip - it is steep at sections. Is your blog published for the other sections? I could only see your Fife Coastal Path report. Have a great walk and enjoy the scenery!

Thank you for your reply Ettrick Shepherd. It took me 7.5 hours, but I did make the bus - whew! I have written up my walk on my blog but this site will not allow me to post it here. How did you manage? Yes, all my other walks (St Magnus Way etc) are on my walkingwithoutadonkey blog, as is this one now I have done it. You will find this on recent blogs. My thanks to you and a link is part of it.

I’m glad you caught the bus too! I think you need to click on the ‘Share Your Report’ link at the bottom of the long walk in question. I upload from my phone so it’s a bit fiddly and I’m still finding my way around the site. Found your blog - thanks for the shout out! Will post there too