Breakfast fun at Skiddaw House again - scrambling eggs and making toast in the grill and boiling water in the kettle which doesn't whistle. I'd even brought a little bottle of real milk, because I'm not keen on UHT, as the finishing touch to the feast.

Things had mostly dried off overnight - even my shoes weren't quite as wet as they had been - and the remaining cloud was lying very atmospherically in wisps across the slopes. The burns were still running full and fast, but the path itself was fairly dry. The path keeps to its original level as the valley below drops away, and ends up contouring the hillside - this is an unusual place for the Lake District, as I can't think of many large valleys so utterly empty.

From here the great central fault is blocked by High Rigg, but the continuing break in the hills is visible beyond - a stunning view in the haze and the shreds of cloud. 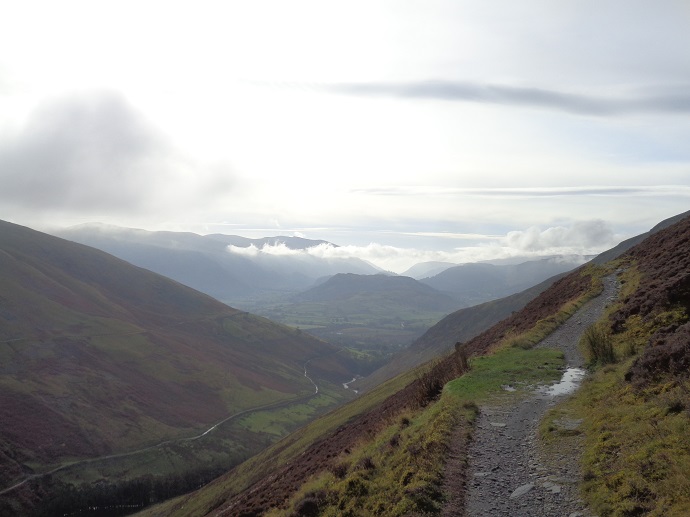 Round the corner the views opened out across the northern ends of the hills and the first objective of the day came into view, and then the path tucked itself back into the hillside to cross Whit Beck in a little bracken-brown valley. Latrigg and the northwest hills

I could have turned directly up Lonscale Fell as I came round it, but I had another hill to visit first, little Latrigg at the foot - quite a change from the emptiness of the valley to the walkers gathering here.

From the carpark, however, I took the direct route to the top and soon lost everyone else again - this is only a broad grassy slope, nothing difficult, but the main path seems to be obligatory! Latrigg was another hill which I expected to have an impressive cairn and didn't - a green bump in the grass and a worn bump in the path, both unmarked, competed to be the highest point. A little further west is a point which is obviously not the highest, but does have the best bird's eye view of Keswick, as well as the view of the hills beyond. This was going to be another Sesame Street day, I realised, brought to me by the letter L - Latrigg, Lonscale Fell, Little Man, and then if I wanted I could skip Skiddaw itself and head straight to Long Side - I didn't particularly want, though, because I was quite keen to actually see the main summit.

I took the main path down, a gentle loop with the higher hills ahead in a glorious patchwork of autumn colours. The main Skiddaw path is a surprising emphatic scar on the hill, but it's solid and useful, and no doubt stops things from getting worse - the line of an old path is also visible taking a more direct route, a vivid green streak through the bracken. I followed the path on to the little flat platform which is the remains of Skiddaw hut, where I had a quick rest and watched some kind of mountain bike lesson going on below me, and then climbed on by the fence, until the main path veered off to the left, and I followed a little trodden path on above the fence to the dip between Skiddaw and Lonscale Fell, which seemed to retreat as I approached it. This fairly flat place was hard work - a toil up to the fence, and a turn to follow a broader path along the top, with yesterday's hills beginning to come back into view. The cairn is about as flat as the top of the hill - and the true high point might be by an even smaller cairn slightly to the south - but although the views aren't stunning, it's a good viewpoint for the northern hills. To get back to the main path I had to retrace my steps for a good part of the way, sticking to the fence as the path crossed to the other side of it. The Little Man ahead looked depressingly tall and steep, as I felt I'd come a long way up already. 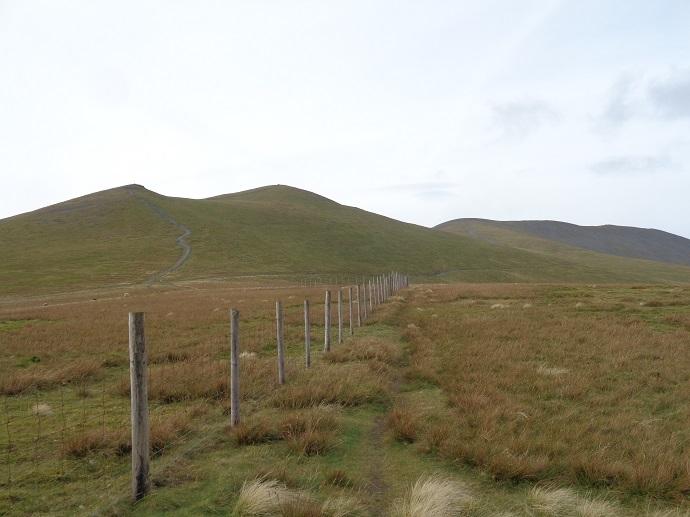 Heading towards the Skiddaw tops

Once I was on it, though, it was fine - a fairly short climb to the Lower Man, where a lady on the phone appeared to believe that she was on the Little Man looking at the top of Skiddaw, and wondering where the path led on to 'all along that ridge', and the down and up again to the summit, with an odd pole in its cairn and an even better view back to all the places I'd been the day before. 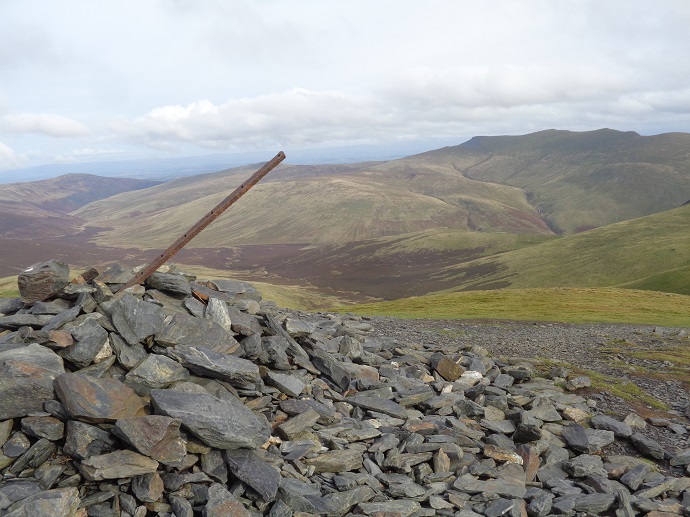 It was lunchtime, and I also needed to sort out my plans - I'd forgotten to look up the buses when I was last online at Borrowdale, or in the paper timetable at Skiddaw House, and I only had a very hazy idea of my deadline. The backup plan was a bus to Carlisle at about quarter to 6, but I didn't want to get that if I could help it - I really wanted to make it to Penrith for dinner one last time. So fishing about in old downloaded timetables told me that the last X4 I could get into Keswick, round about 5, would be more or less on the hour, although there was still the bus coming from Carlisle into Keswick, which was probably earlier, but maybe not...

From here the worst of the climbing was done, really, and the path led on over the tops - a steepish drop, and then a fairly gentle climb up to where the main path joined on again, together with most of the people, and on up to the south top. Skiddaw is well off for tops - there's this south top with its cairn and shelter, then the middle top which misled me in the mist, before the true top, then a north top beyond. Up here I could see why I'd gone wrong in the deep fog the last time, apart from miscounting the tops - what I had thought was just empty stony top, with a distinct path going off, turned out to *be* the path, at least 6 feet wide. I thought that the path down to the Carl Side col would be better this time when it wasn't so wet, but it was almost worse - not quite so slippery, but still very steep and very loose, and this time I could see how far there still was to go before I reached dry land. As I inched my way down I met a man inching his way up who looked almost as unhappy, although he said that he didn't hate it, just accepted it as a necessary part of the hill! The Carl Side path

I reached the col without getting desperately behind time, though, and the next top wasn't far away - the path skirting the edge of Carl Side, and climbing again to the little peaked top of Long Side. Skiddaw looms above, and from here it doesn't look particularly plausible to go either up or down the side of it. Heading on in the other direction the view became quite different, the narrow-topped ridge stretching out parallel to Bassenthwaite Lake below. This was a lovely last stretch along to the last summit of the day, where the view spread out over my very last Wainwright and back over the water into Scotland. The only problem was that time was a bit against me, so I had very little time for appreciating Ullock Pike, before heading on down. It seemed a shame to hurry over these very last hills, but it also seemed absolutely appropriate - I've hurried along my share of little ridges like this on my way round, so why not one more.

A man passed me from nowhere - another Scot - which turned out to be quite good for me, because he gave me a speed to aspire to, and although I definitely didn't keep up with him, I think I did get on quicker than I would have done otherwise. The path wound down and wound down, little stony places and little loose places, until a last drop brought me into the flatter place where the path to the Ravenstone Hotel turned back on itself and slanted across the hillside, through heather at first and then between bracken above and autumn trees below. The path lands at one side of the hotel, with no bus stop in sight, and I had gone along an awkward stretch of the road before I realised that I should have followed the hotel drive up and down to where it comes out to the road at the other side.

After all the hurrying, my most reliable clock said that it was 17:02 when I reached the bus stop at the far end - just too late for the X5, but by good luck the sign also showed a 17:07, the Carlisle bus on its way in which I had expected to miss. I was fairly sure, though, that if the X5 had gone past in the last few minutes I would have seen it, and sure enough that was the bus that came along a minute or two later.

I had an hour to wait, unless I wanted to get to Penrith early, and I thought that in a place the size of Keswick, there must be somewhere that would sell a scone after 5 o'clock, which is always a problem. Getting off the bus I realised that it was probably right ahead of me, and sure enough the Booth's cafe was still open - not the most romantic looking place, but it was satisfying enough.

So I made it to Penrith in the end, and my traditional meal in the Agricultural Hotel, and a journey home without being more than a couple of minutes delayed.

Re: A Skiddaw traverse

Another good day's walking and in much better weather than the day before. Again, a walk well related with some good pics for the album

One more to go eh! Will it be this year or next

Whenever it is good luck with the weather

Re: A Skiddaw traverse