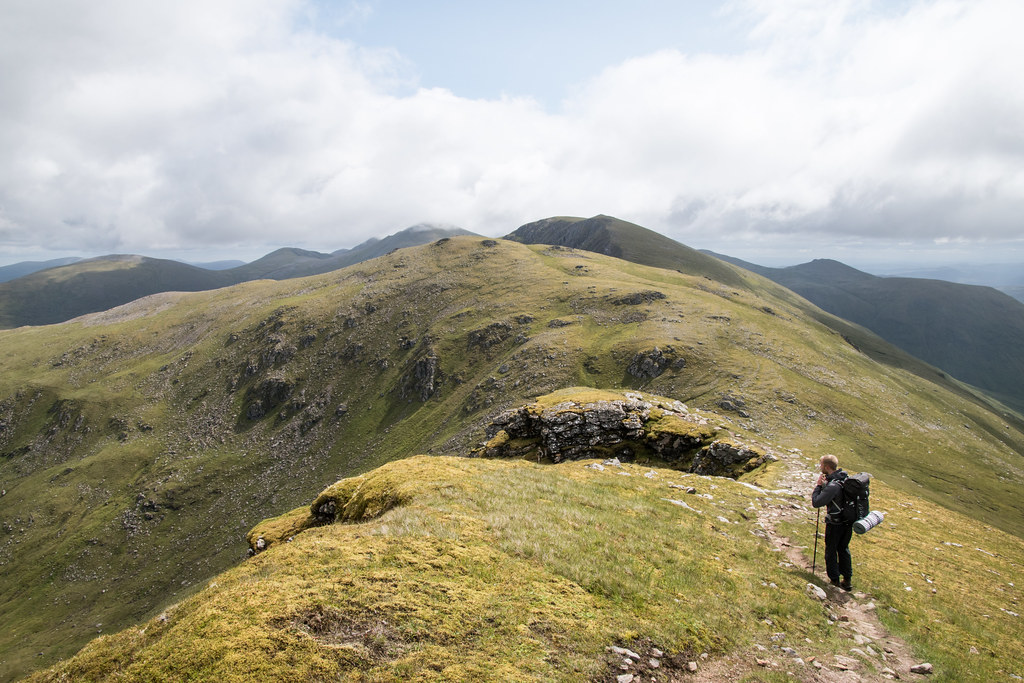 My backlog of Walk Reports has now reached an unprecedented level and I really must pull the finger out. To be exact, this outing starting on the 6th July 2019, it is now the 13th November and I am only just getting around to this, so apologies if you are looking for some nice winter report! Hopefully the duration passed gives me some creative license for the facts & figures.

Andrew and I, in the middle of the week had been communicating a last-minute plan to get out into the hills at the weekend. With the weather looking tragically cloudy and wet in most parts, this is how the conversation unfolded:
“or the two random ones east of Ullapool that we haven’t done, one on Saturday, one on Sunday”
“Think we could do all the Fannichs?”
“Haha”
“Maybe Ullapool two are best”
“Always good when someone suggests something like that”
“I reckon we easily could do them all… but”
“**** it. Fancy the Fannichs? All of them”
“Yeah I’m absolutely up for it”
“Need to run to a meeting sorry”

The plan was straightforward, park on the A835, walk half of Saturday, bivvi somewhere then finish the route on the Sunday and hitchhike back from the A832 – easy peasy, loads of people do it and there is plenty of Walk Reports backing that up.

It was overcast when we set off just after 13:00, knowing the rain was due any minute we made the most of it being dry and marched along the well-defined track at the start of the walk. 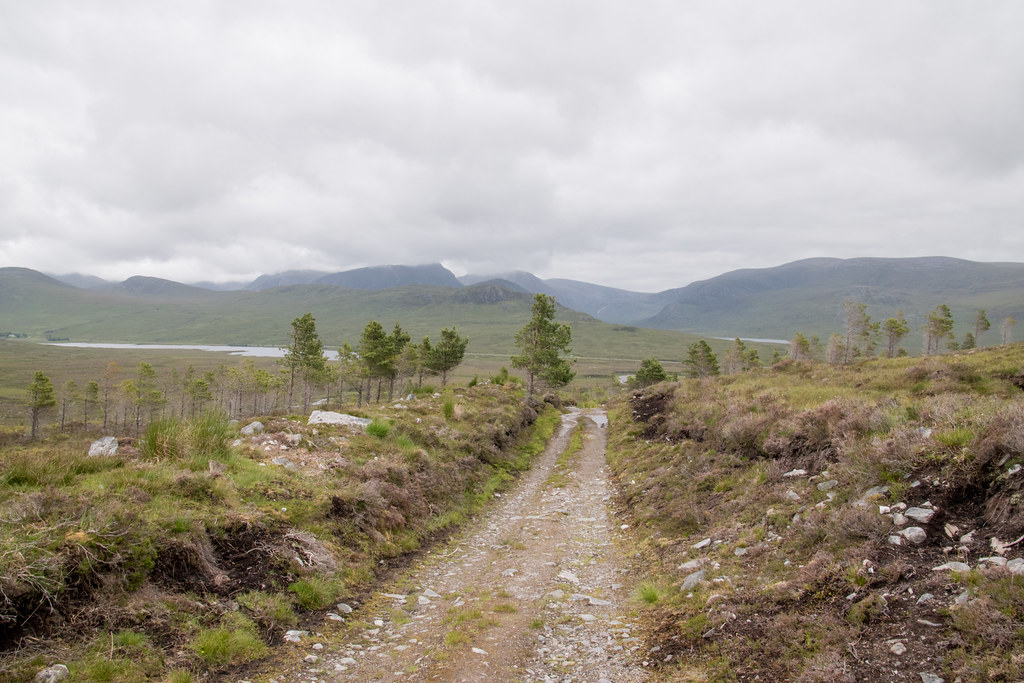 The good path runs out after a couple of kilometres and a boggy path, more fitting for the remainder of the trip starts alongside Abhainn a’ Ghiubhais Li.

Just before the rain commenced 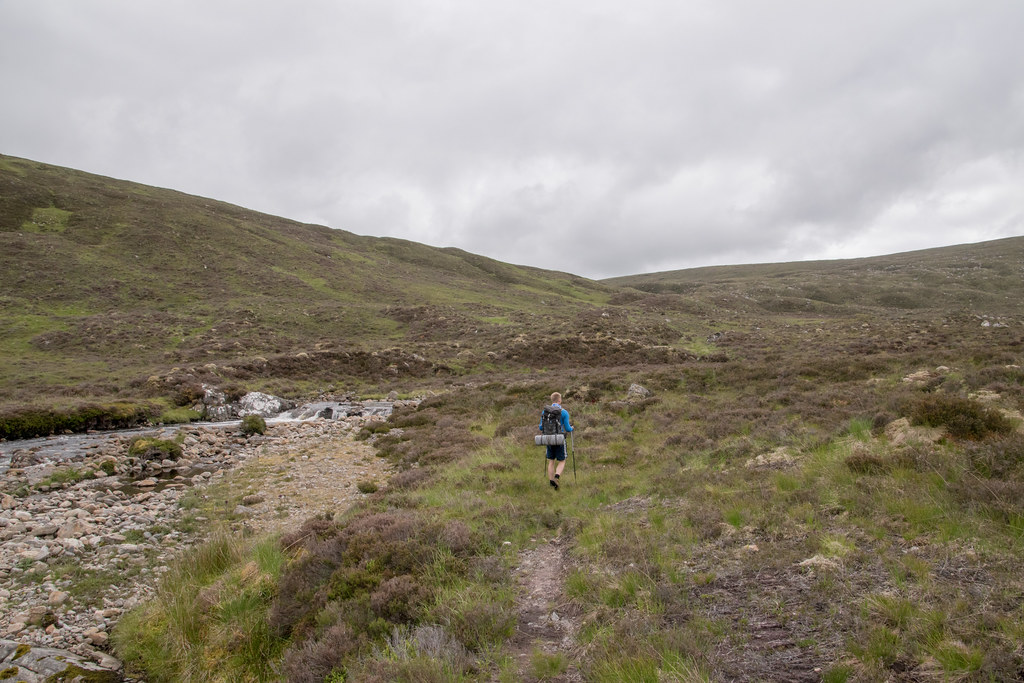 The walk into Loch Gorm was boggy and uneasy underfoot. With little to no path, we just took our baring and headed as straight as you can over the knobbly ground. It was a warm day; I know that’s hard to remember in the depths of November but trust me. Annoyingly warm because it was a fine line on what made you wetter – a sweaty waterproof or none at all. 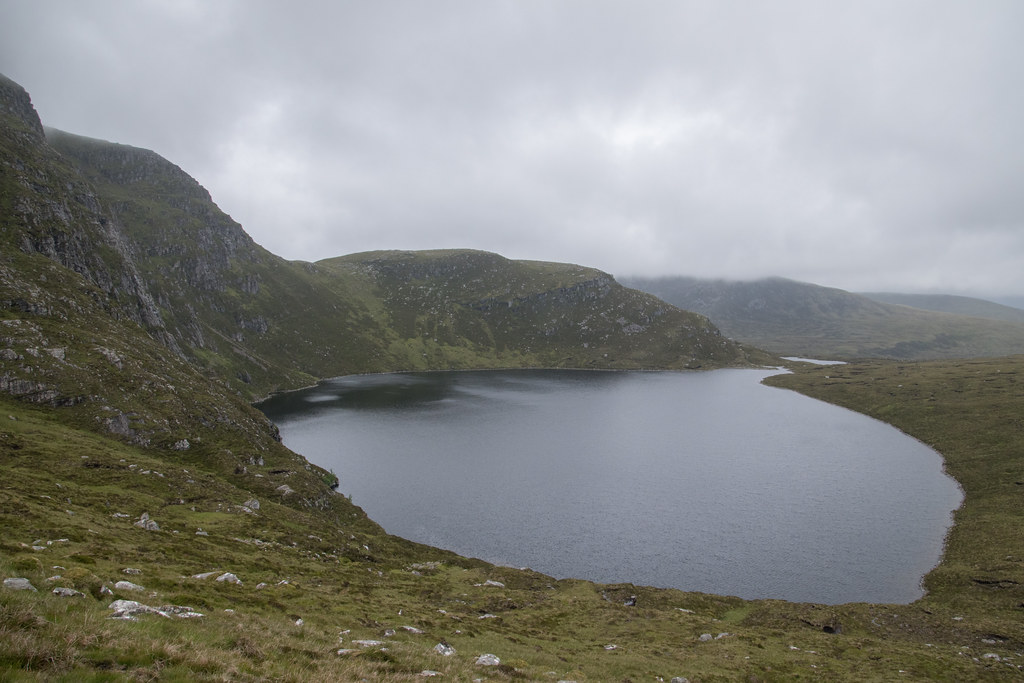 We passed one couple and a solo walker on this steep but brief ascent. They’d prove to be our last company for nearly 24-hours. Well there may have been others a couple of hundred meters away, but we would have had little to no chance of seeing them.

This would become a familiar sight 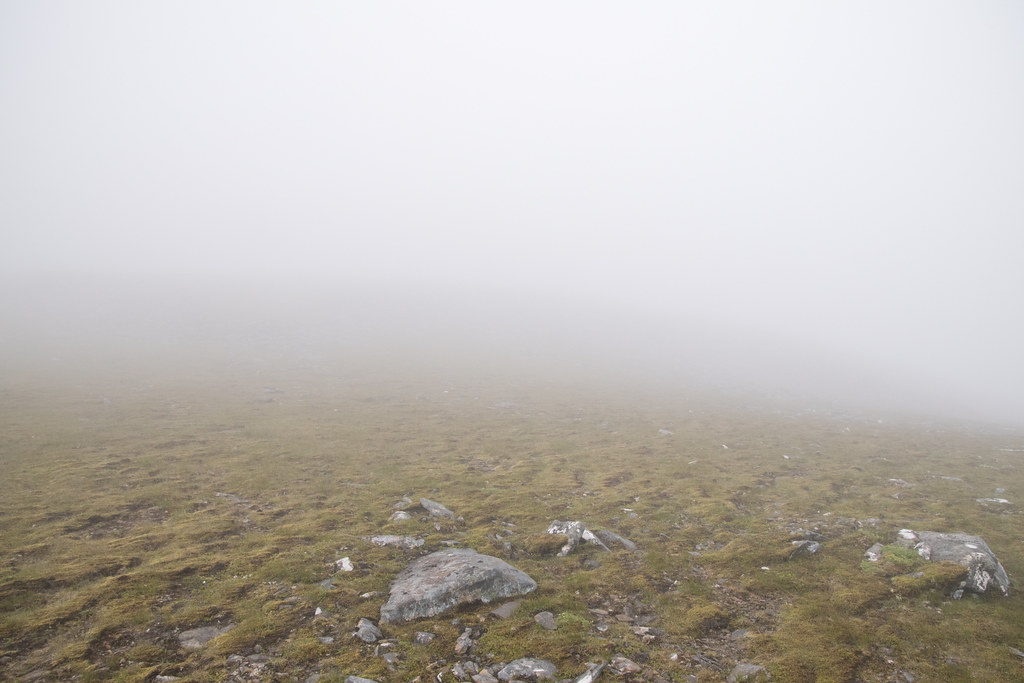 We did get one very brief break 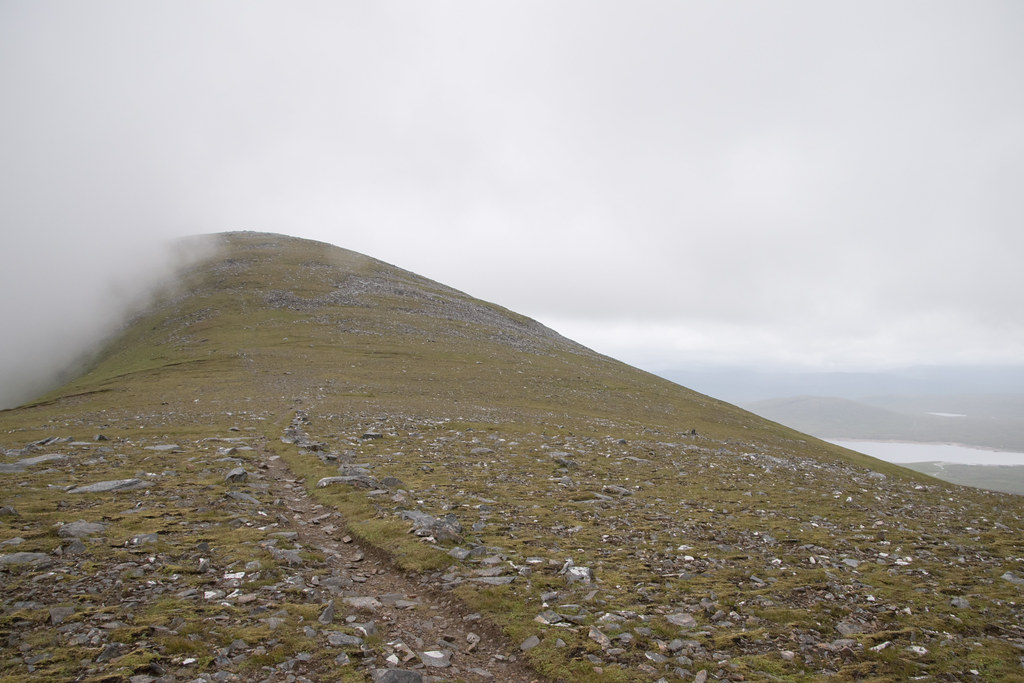 Early on walking in the clouds was quite relaxing. Nav was difficult but we were in no rush and had no set bivvi site so just carried on at a leisurely but swift pace – there wasn’t any point in stopping for photos!

By the time we were skirting around Sgurr Mor on route to Beinn Liath Mhor Fannaich I was beginning to get tired of the clouds. It was getting colder, slightly darker and far less enjoyable. The ascent up Beinn Liath Mhor Fannaich was rather unenjoyable as we tackled it head one (well from the Southwest). More sensibly we came off the summit towards the west side and joined the path.

We stopped at the 944m marker before tackling the final approach to Sgurr Mor and tucked into our early dinners. My pasta was revolting. I am sure Andrew had some delicious homemade pasta whilst I was lazy and went for shop bought sauce which did not travel well.

Now we were 4 Munros into the planned 9. Motivation kind of went like:
An Coileachan – great
Meall Gorm – good
Beinn Laith Mhor Fannaich – hungry
Sgurr Mor – Hmmm not sure this was a good idea. 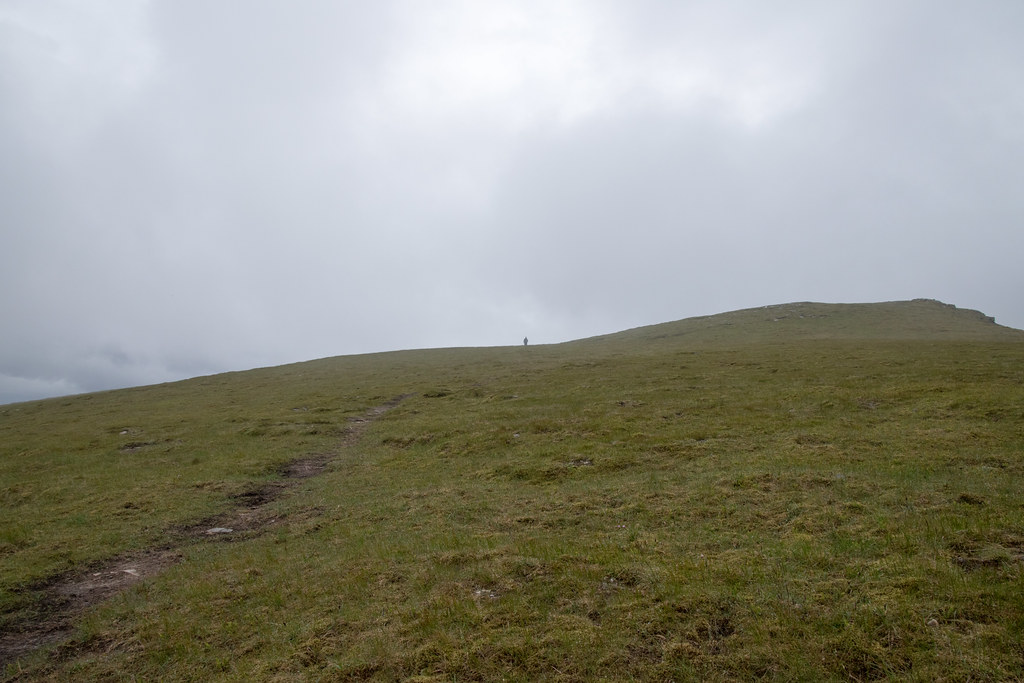 After Sgurr Mor heading down towards Eag nam Fear-bogha I had one of my weirdest experience out in the hills – very hard to explain, but I will try.

There was a small lochan, maybe even a puddle really close-by, within a stone’s throw away. To me at the time it looked like a massive loch, similar scale to Loch Gorm, or even Loch a’ Mhadaidh. I was a bit panicked thinking we’d taken a wrong baring somewhere and was quite confused, particularly as it was just beginning to get dark. After just a couple more steps we were metres away from the “Loch” which transformed into a tiny puddle only a couple of metres wide. I am still not entirely sure what happened, but it must have been a side effect from walking in cloud with zero to no visibility for such an extended period (nearly 7 hours).

We decided to push on and get up Meall a’ Chrasgaidh before finding a suitable bivvi spot. See that’s the biggest benefit of bivvying; you can almost sleep anywhere. It was a tad windy at the summit we took a straight line heading off the summit towards the lochan between Carn na Criche and Sgurr nan Clach Geala. We found a spot about 850m with a flat enough patch for the two off us and got ready for bed. It very briefly looked like the cloud was going to lift, and for a minute of two we had more than 5 metres worth of visibility. 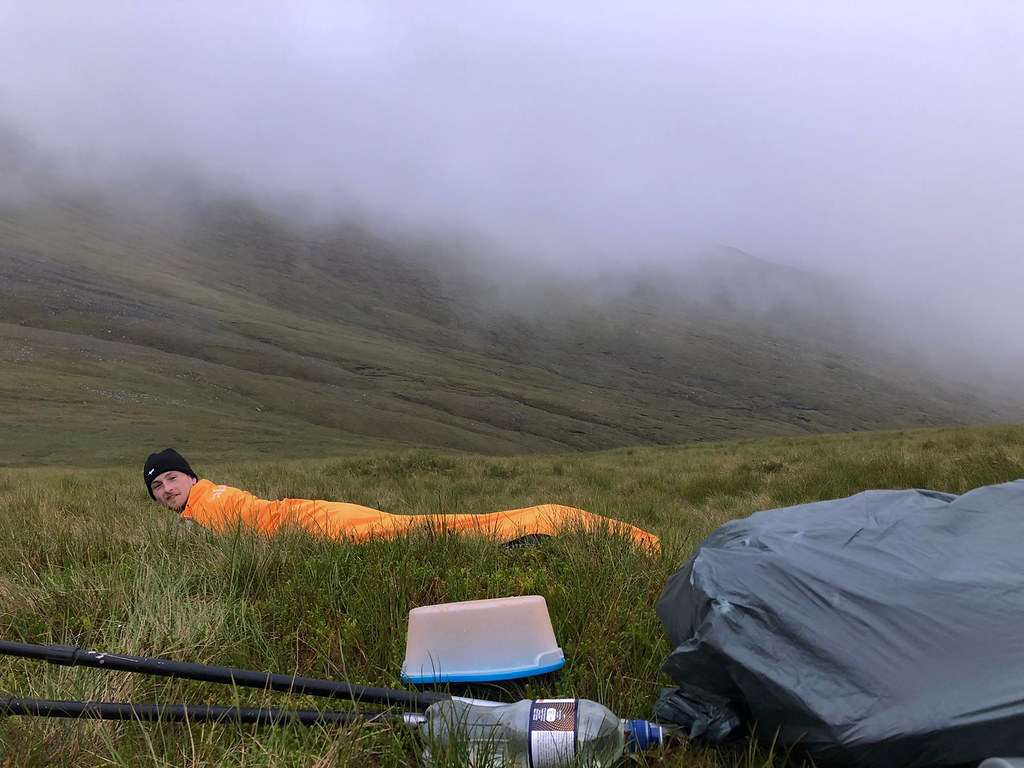 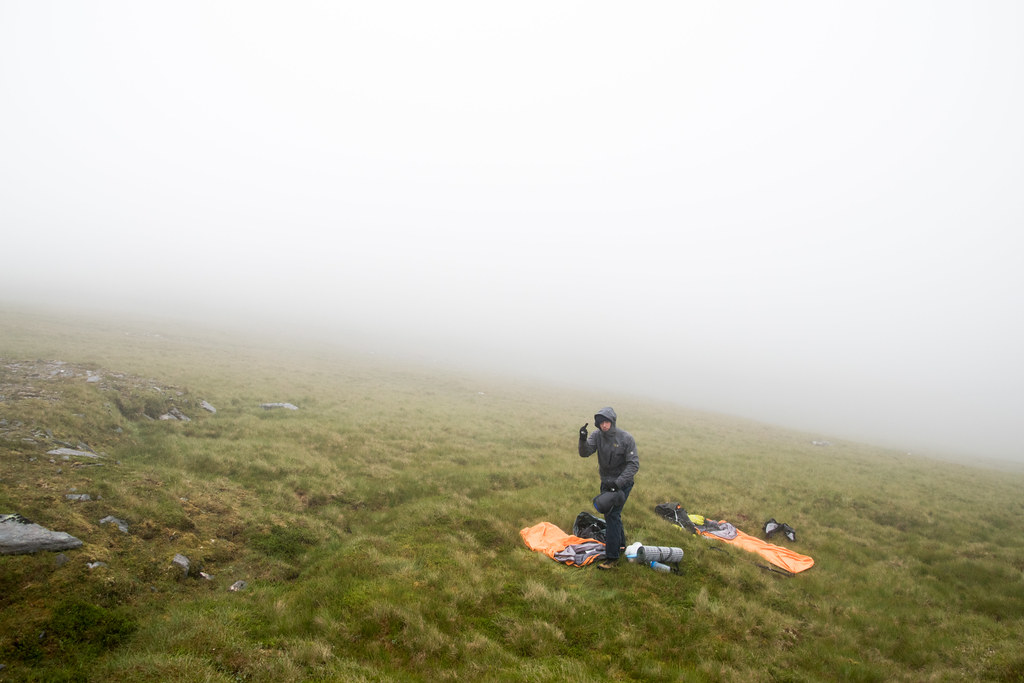 Or maybe not delighted. 05:30 alarm, and the weather had remarkably turned worse. It was colder, wetter and most importantly, windier.

The ascent to Sgurr nan Clach Geala was a slog made even worse by the imaging what we could be seeing if we weren’t in this giant bowl of pea soup.

Occasional sense of what we were missing 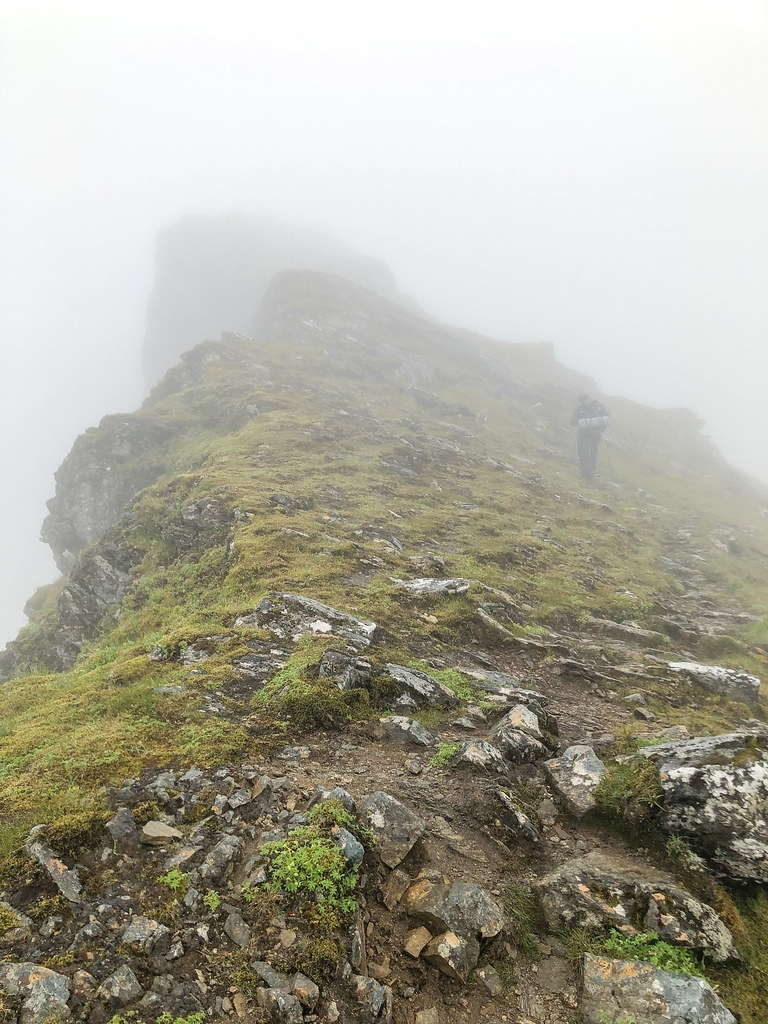 The route to Sgurr nan Each was easy enough and we spent little to no time on the summit before retracing our steps and making the steep descent down from Cadha na Guite towards the 550m bealach.

On the route down Andrew was heavily suggesting a return to the A832 leaving the final two Munros, Sgurr Breac and A’ Chailleach out from this outing. Half expecting him to be joking or just making me work hard to convince him, but the closer we got I realised he was being serious. All for solo walking but my strong opinion is if you set out in a group it’s best to finish as the group, or at least not leave people as solos – just tempting fate.

I think it would have been a near impossible task on convincing him until thankfully, just before the point of no return, the clouds lifted and we got views up to what appeared to be the summit of Sgurr Breac.

Maybe slightly hesitantly, but I had acceptance for us to carry on to the final two, think my persuasion went something like, “7 is average, 9 is epic”.

View back where the clouds were still lingering 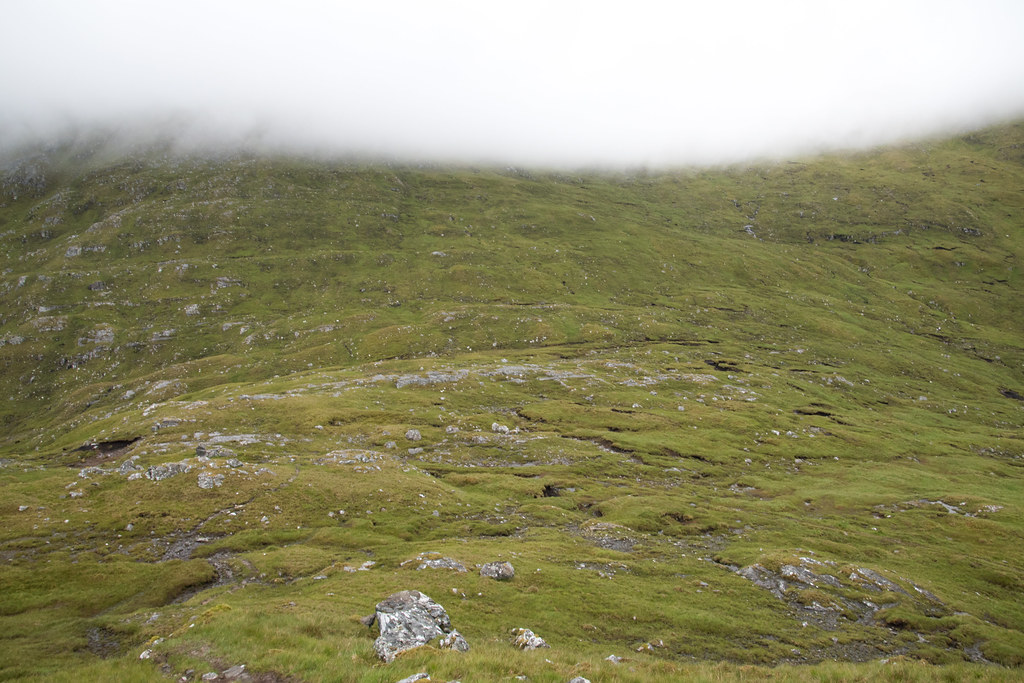 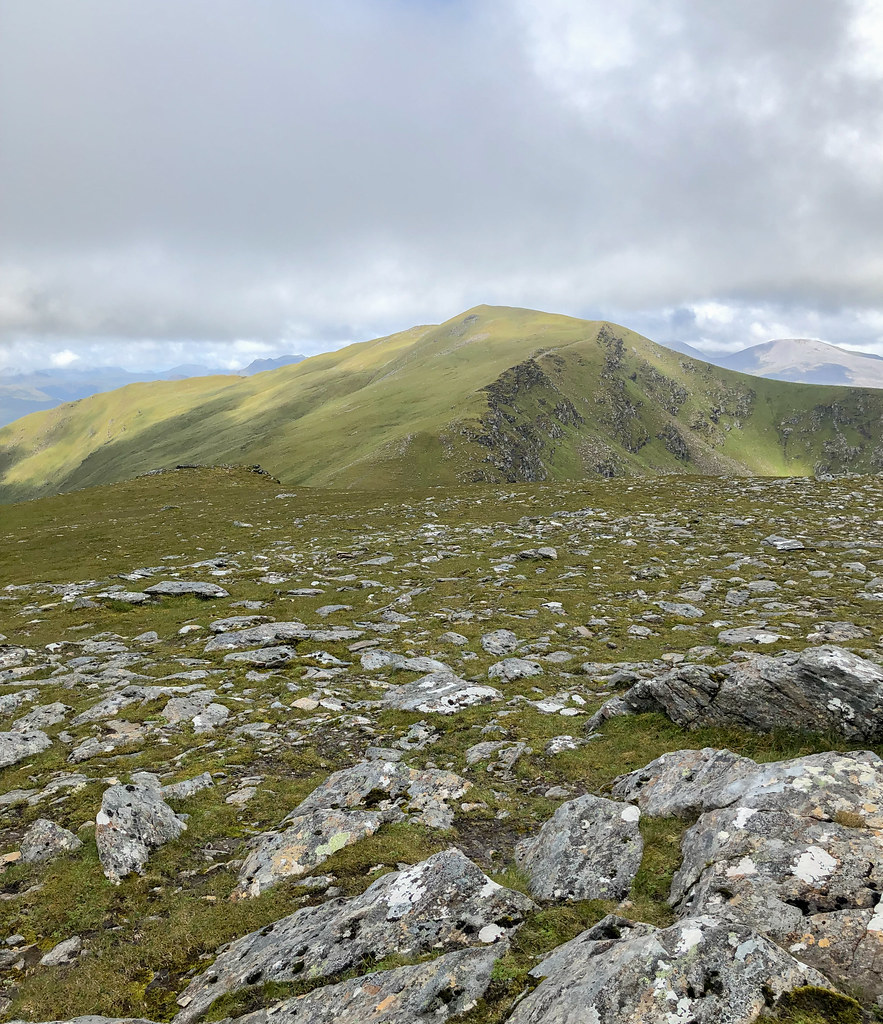 Nearing top of A’ Chailleach – Loch Fannich in the background 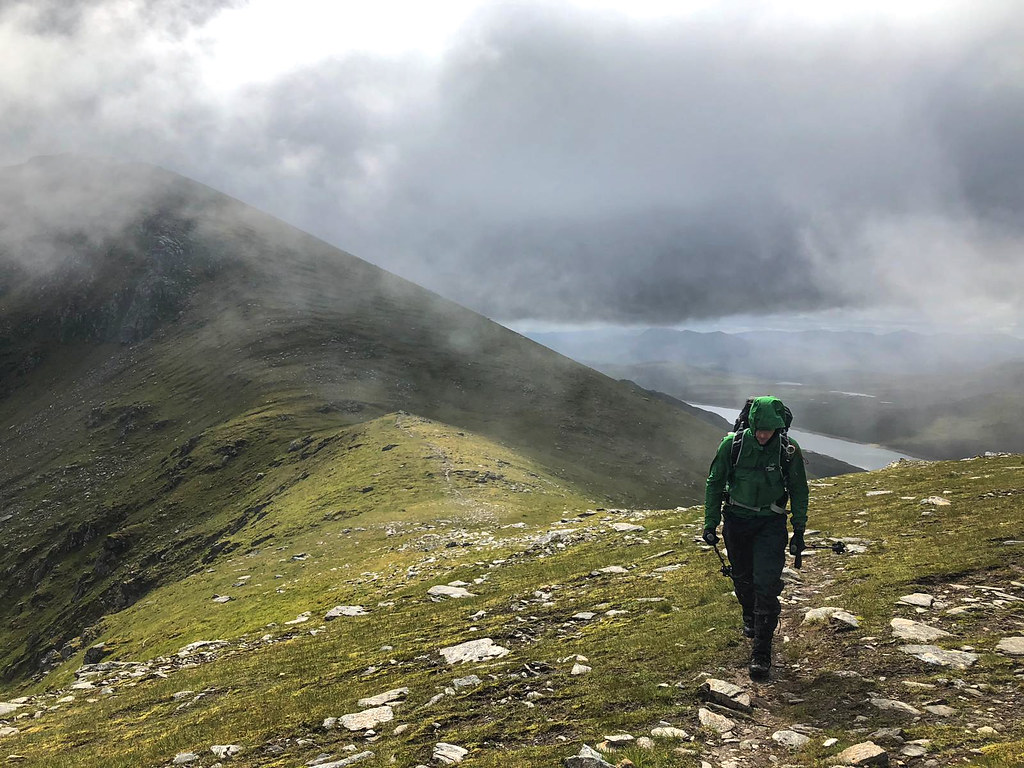 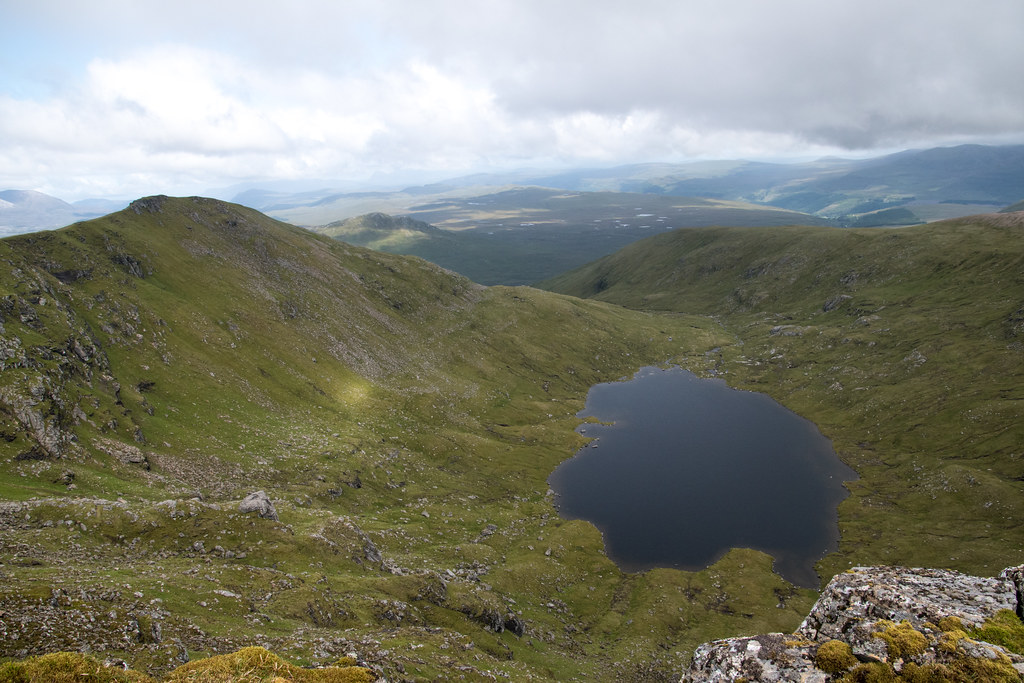 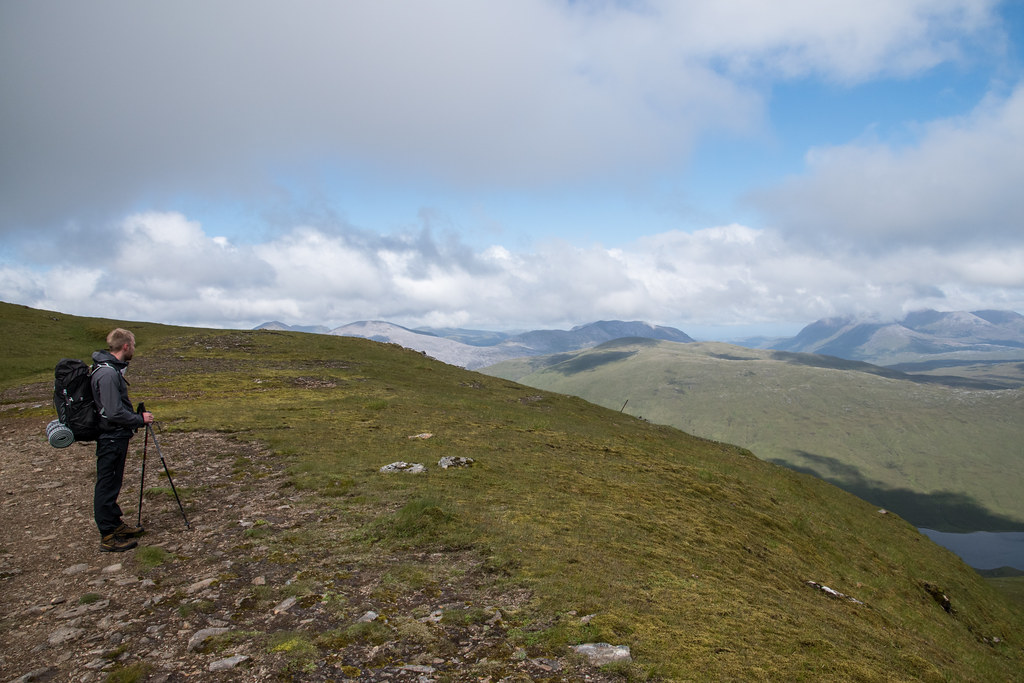 I felt relieved we did get some final views up the last 2, especially after dragging Andrew, somewhat against his will. It was a great walk down along the side of Druim Reidh, where we bumped into a couple heading off to do the 2 – they’d probably get the best of the weather.

The views by now were extensive, or comparatively extensive to the previous day. 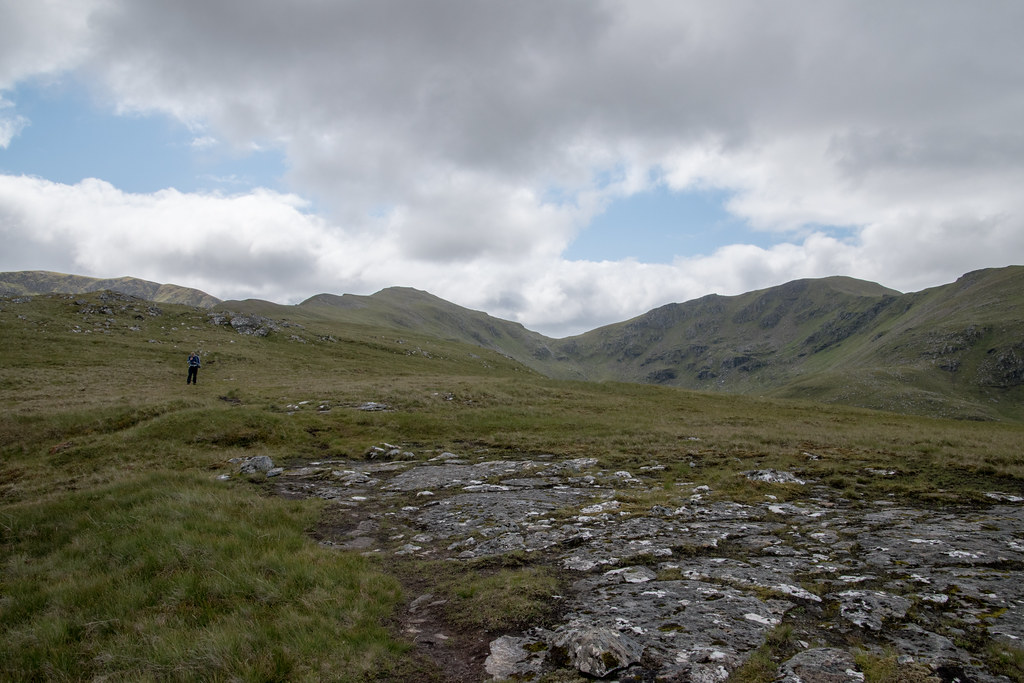 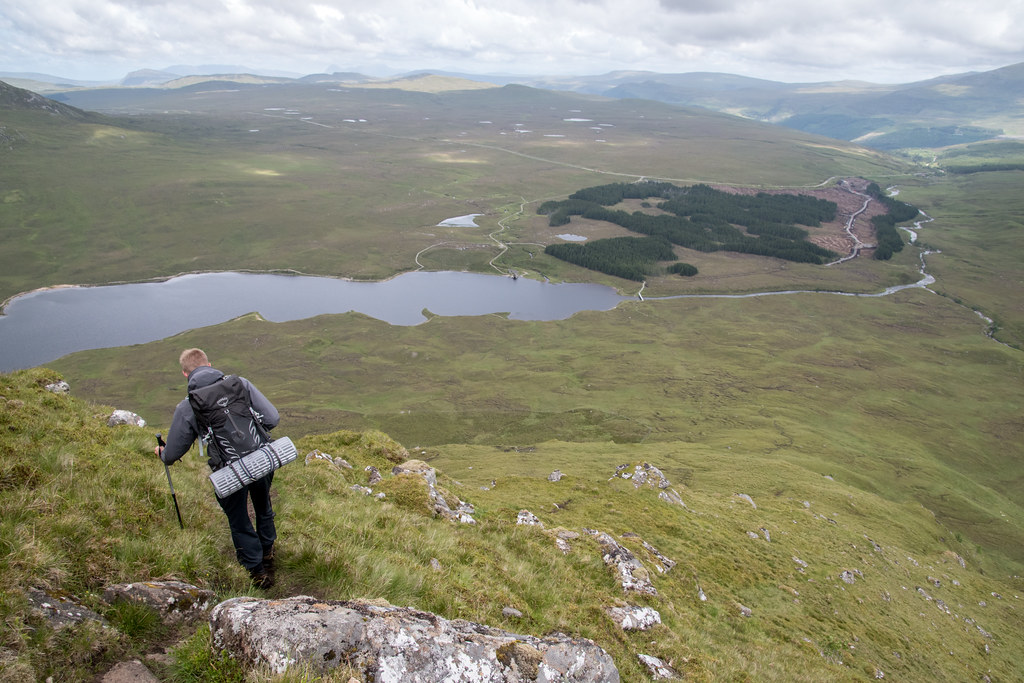 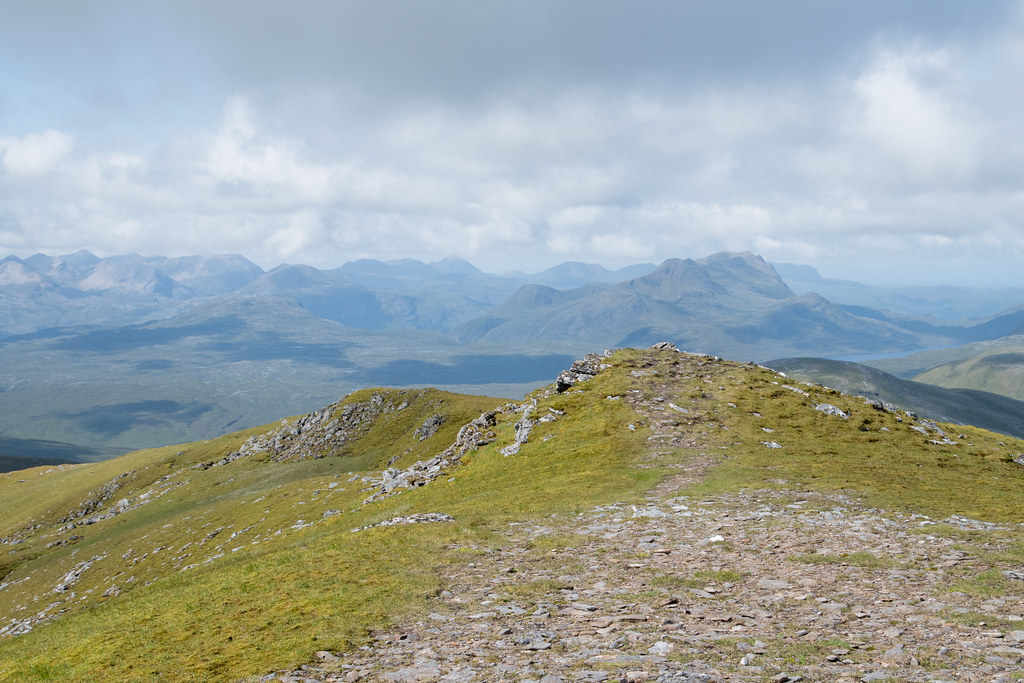 We were down at the road by just before 2pm, brushed off any dirt and tried to make ourselves look as clean, friendly and most importantly… dry.

We could see from miles away that there was plenty traffic and all we needed was someone to be heading south on the A832 and then going Inverness direction on the A835. It has been some time since I had last hitchhiked out in the hills and something I’ve been meaning to do more of.

Nice long straight, right next to the layby 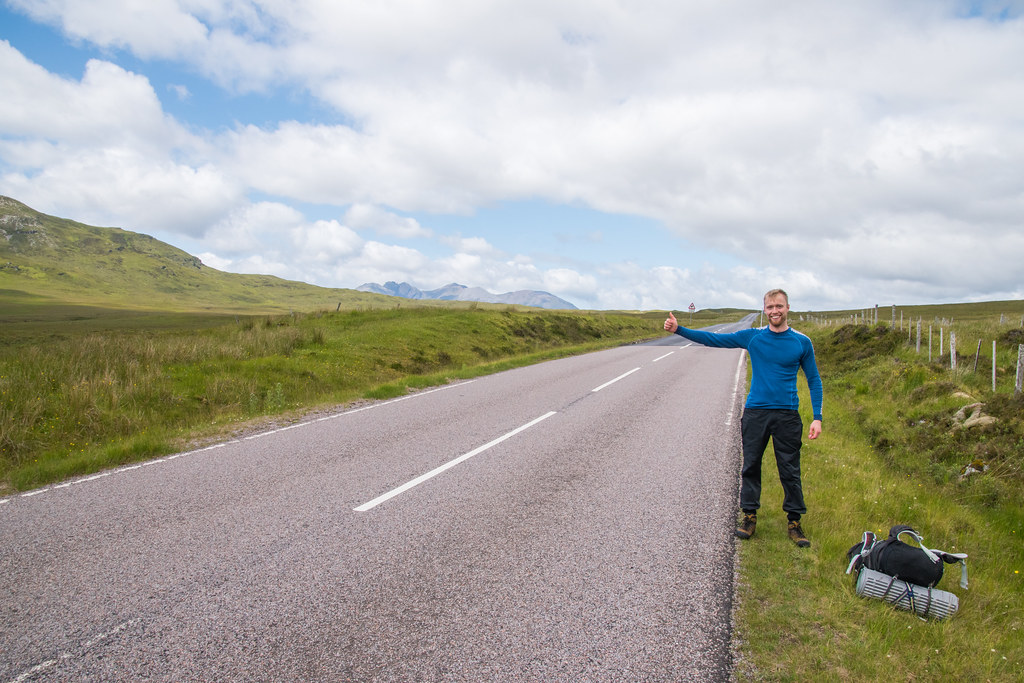 Unfortunately, the people of the Northwest were rather reluctant, and after spending spells each, it took us over 30 minutes. seem to remember over 20 cars going past without stopping.

When a friendly couple did eventually stop, we agreed Andrew would head away to get the car whilst I looked after all the bags and wet clothes.

I can’t remember anything from the drive back other than the second-hand conversation from Andrew and our savours.

“Do you pick up many hitchhikers?”
“Yes, we normally feed them to the dog…”.

The period spent in the clouds was one of the least enjoyable times out in the hills, and most certainly one of the more mentally draining outings. Having said that, I am still glad we managed to do the 9 in a oner, which most definitely is not something that should be underestimated!

I’d genuinely be tempted to try these again in good winter conditions.

Glad you finally got some views!

A good read, thanks. Worth doing again, especially for Sgurr nan Clach Geala which is a special mountain in good conditions.

enjoyed reading, thanks for sharing.

I hope you'll have better views next time! It is always amazing how quick the weather can change and what a different it makes when there are some views!