What a spell of weather! Unusually it lasted in to my days off, however a morning commitment made for a later start than normal. The forecast was for a very cold day and clear blue skies, so a sunset venture was planned to Beinn Chabhair, hopefully hitting the summit for sunset.

We arrived at the Drovers Inn after 1pm and the sun already looked like it was going to set in about an hour! A stunning day though, with the car showing -2 when we parked up. Annoyingly the bridge is still buggered at the campsite, so we walked the mile and a bit along the verge of the A82 (not ideal...) to the gravel track now also signposted for the campsite. Checking the map, this ugly track would take us up to eventually meet the standard path on the plateau near the river. Walking at a fairly brisk pace, we made good progress up the first section, with grand views of Ben Lui and co appearing as we gained height. 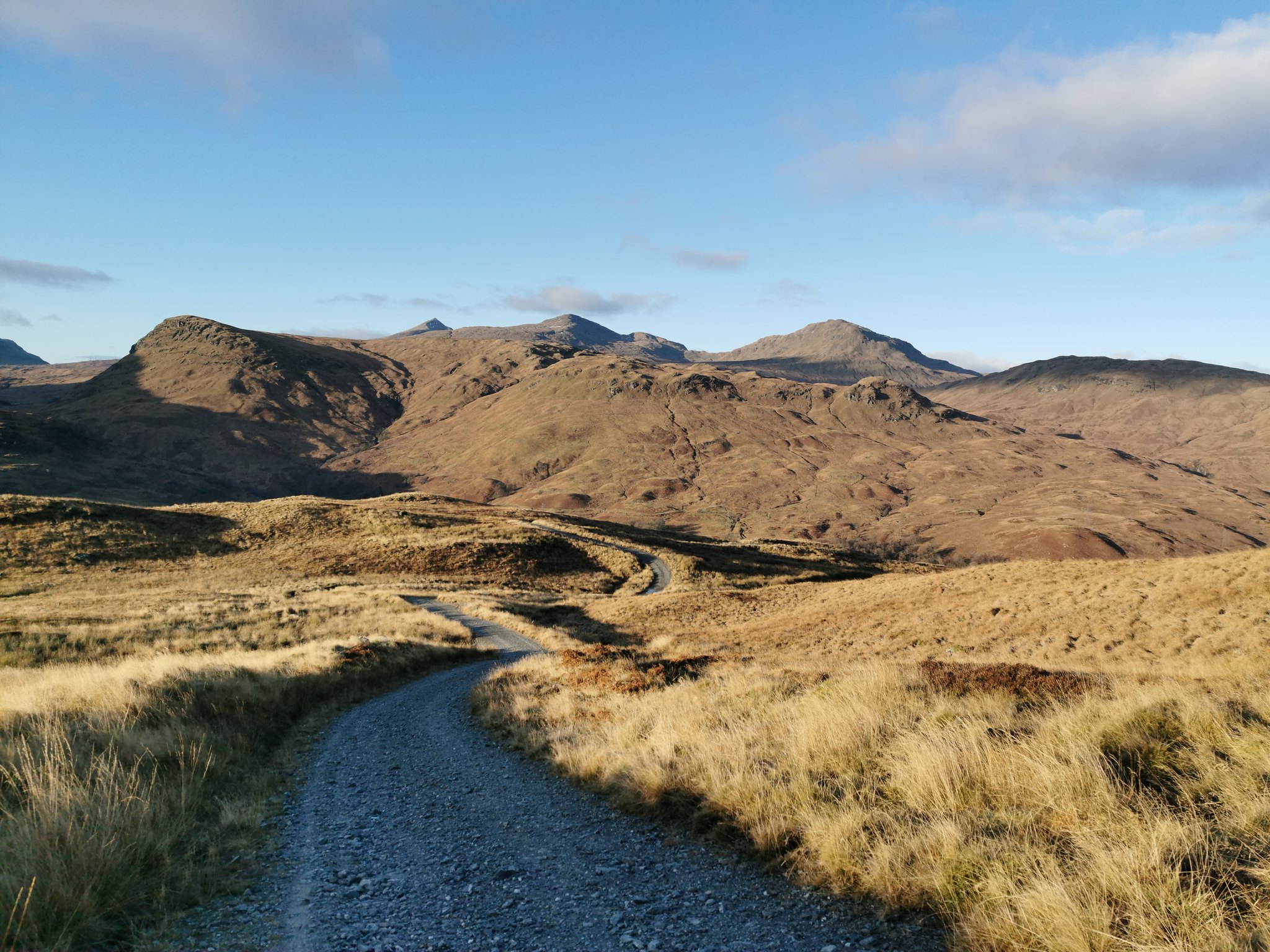 Although not exactly exciting walking underfoot, at least the track cut out a lot of the boggy sections from what I have read, albeit they were all frozen today anyway. The weather and views were simply stunning and we soon had our first view of Beinn Chabhair itself, which looked a little further away than we expected. 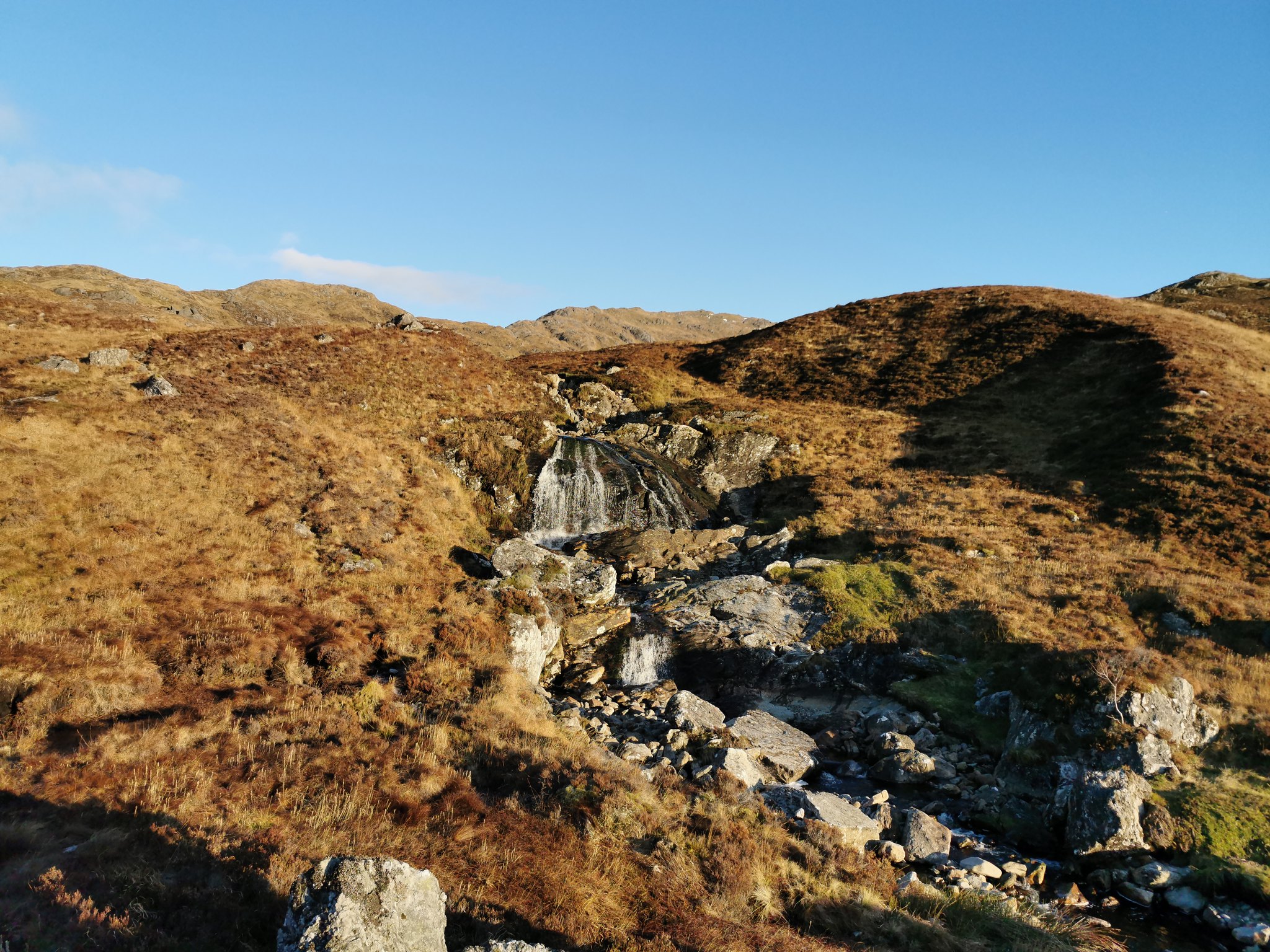 On the hill path now following the river 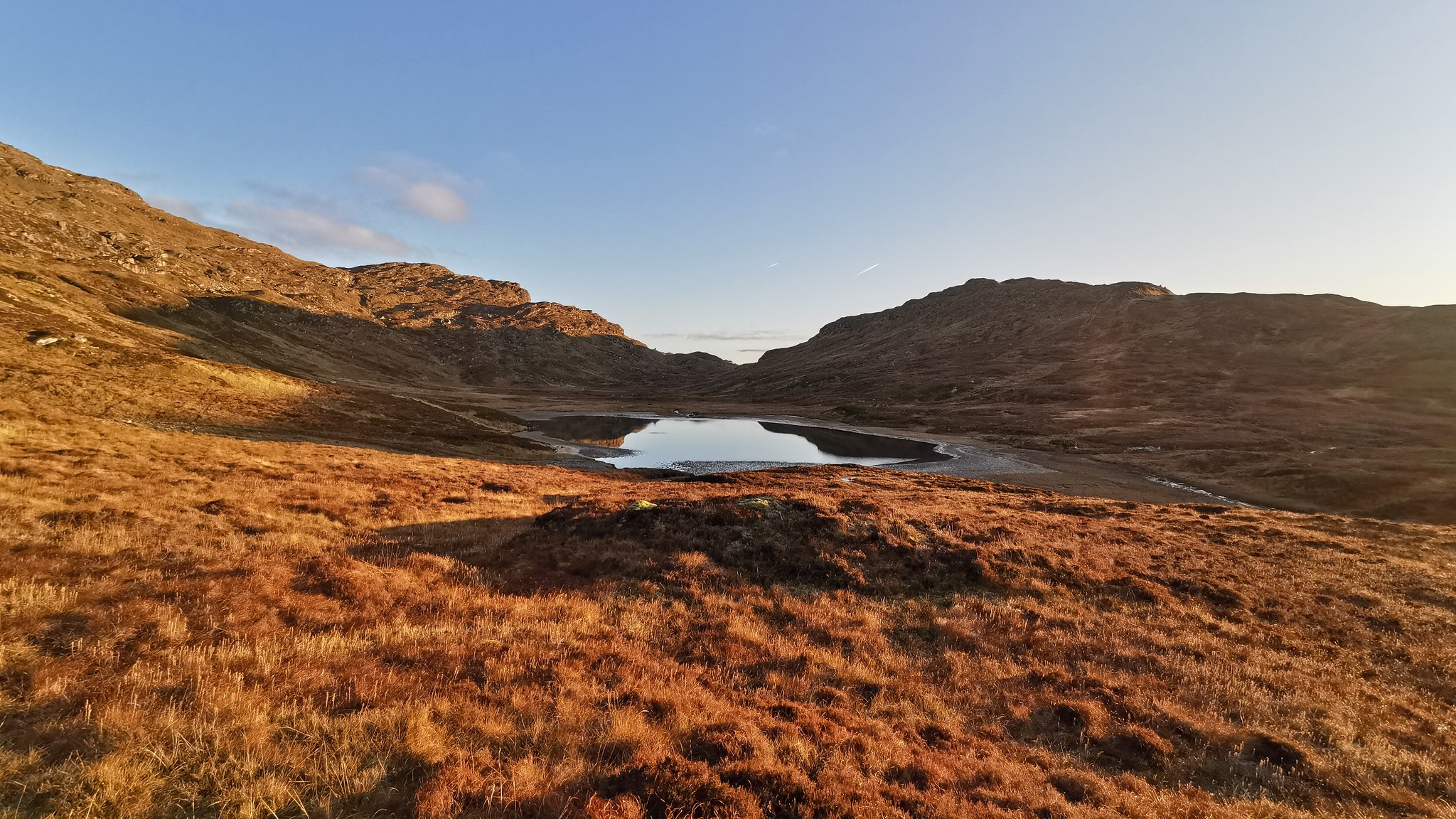 The lochan in the amazing late afternoon light

After a fair amount of flattish walking across frozen bog, we started to climb up Beinn Chabhair itself. My eyes were also fixed firmly on my watch and the sun dropping lower in the sky. It was going to be tight whether the sun would set by the time we reached the summit. The pace was upped! 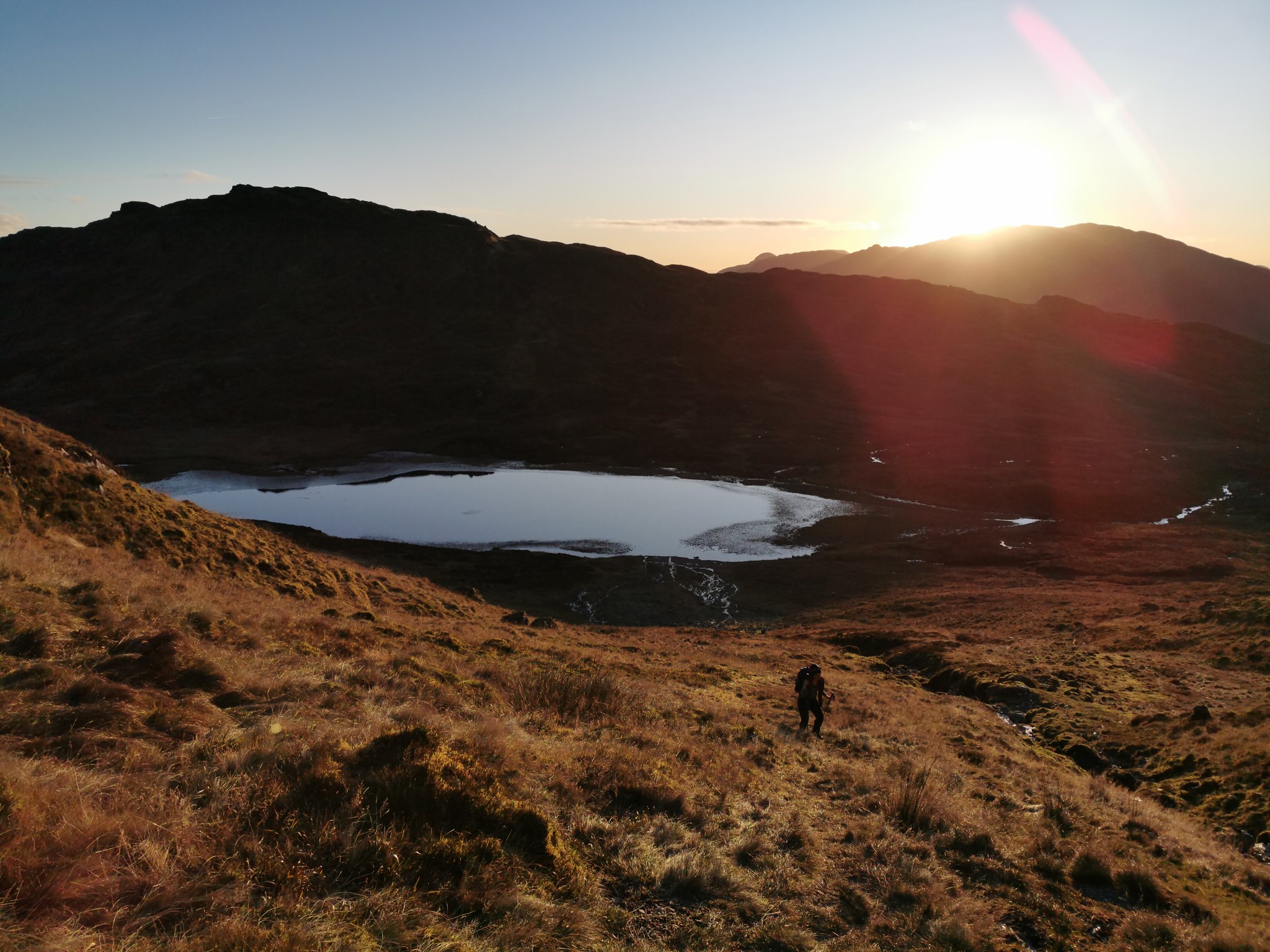 Laura climbing in the evening light 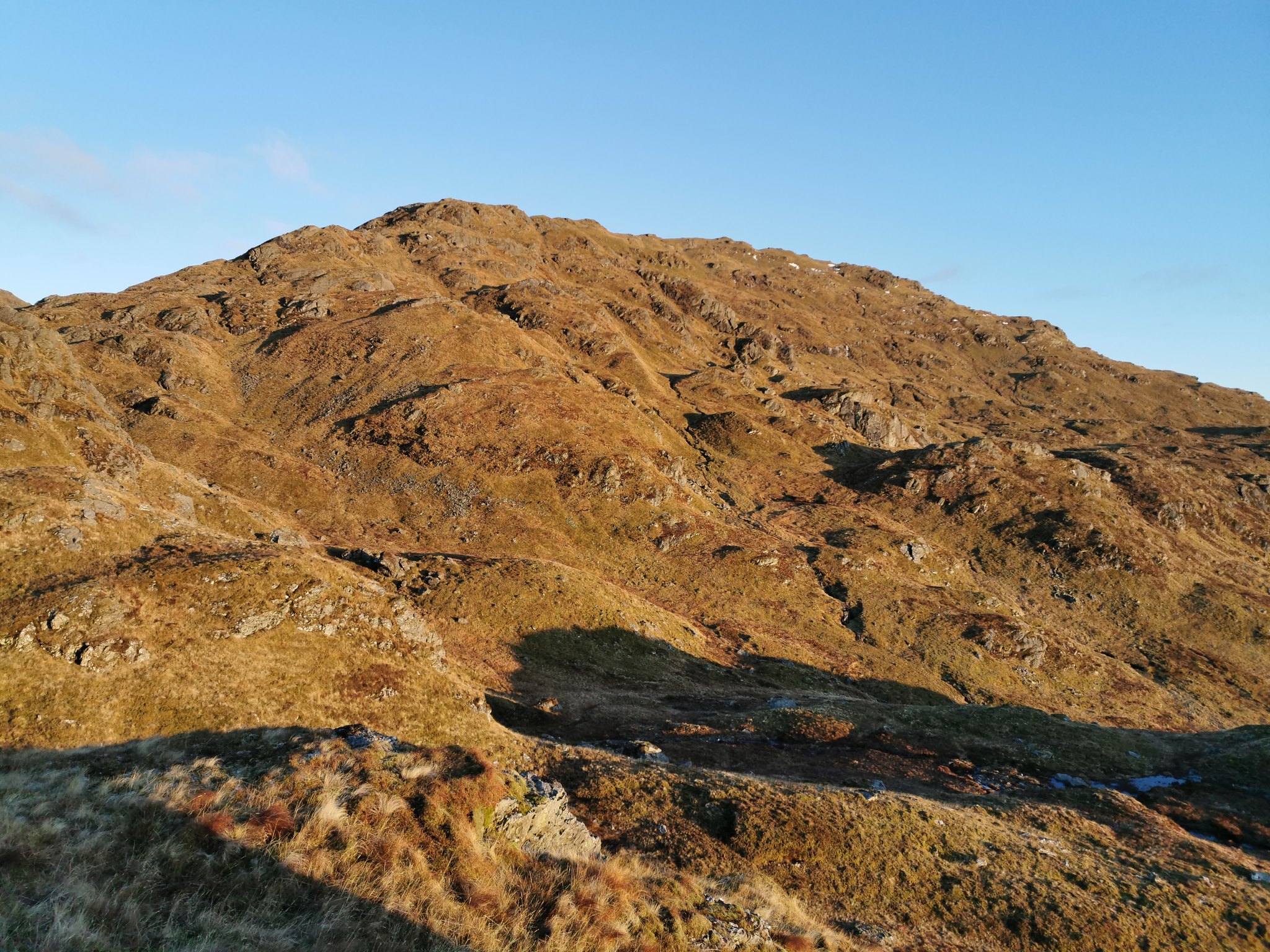 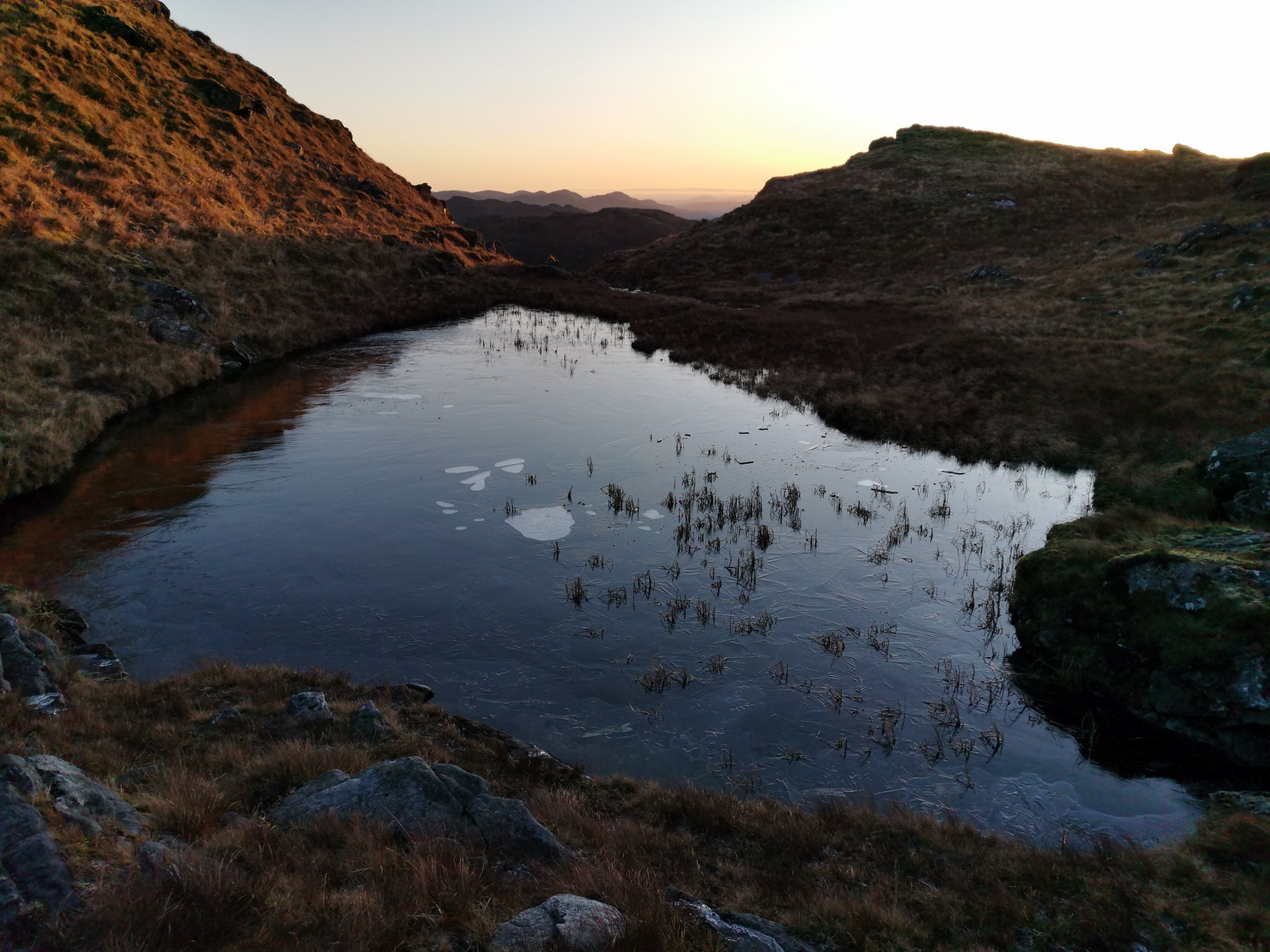 One of the many eye-catching wee frozen lochans

As we started on the ridge up Beinn Chabhair, the summit still looked miles away and time was getting tight. Laura told me to go, so I started half running the final 300m of ascent towards the summit, stopping to take a few pictures on the way. What an afternoon it was! 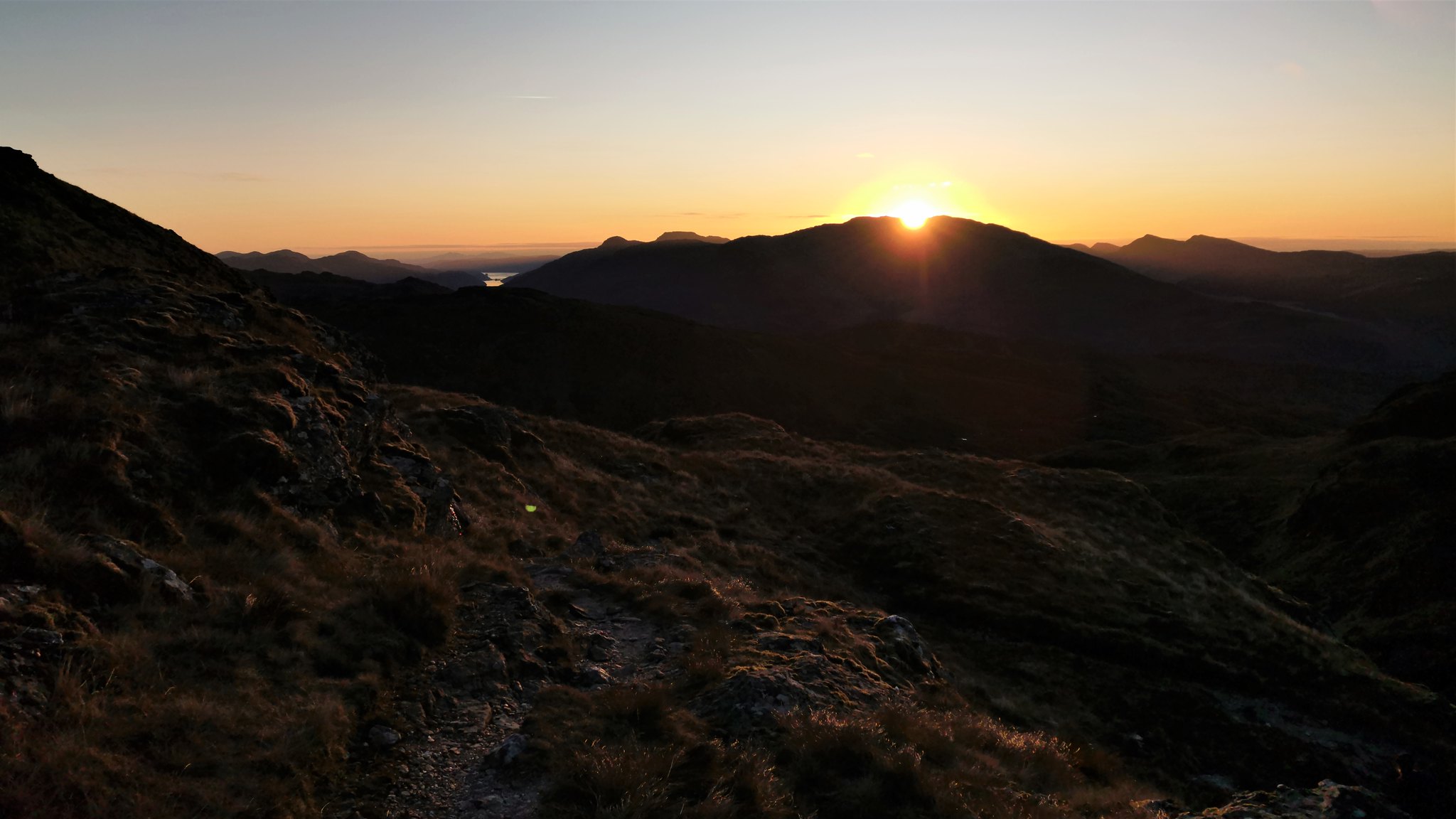 The sun dropping as I climbed higher, chasing the light up the hill. 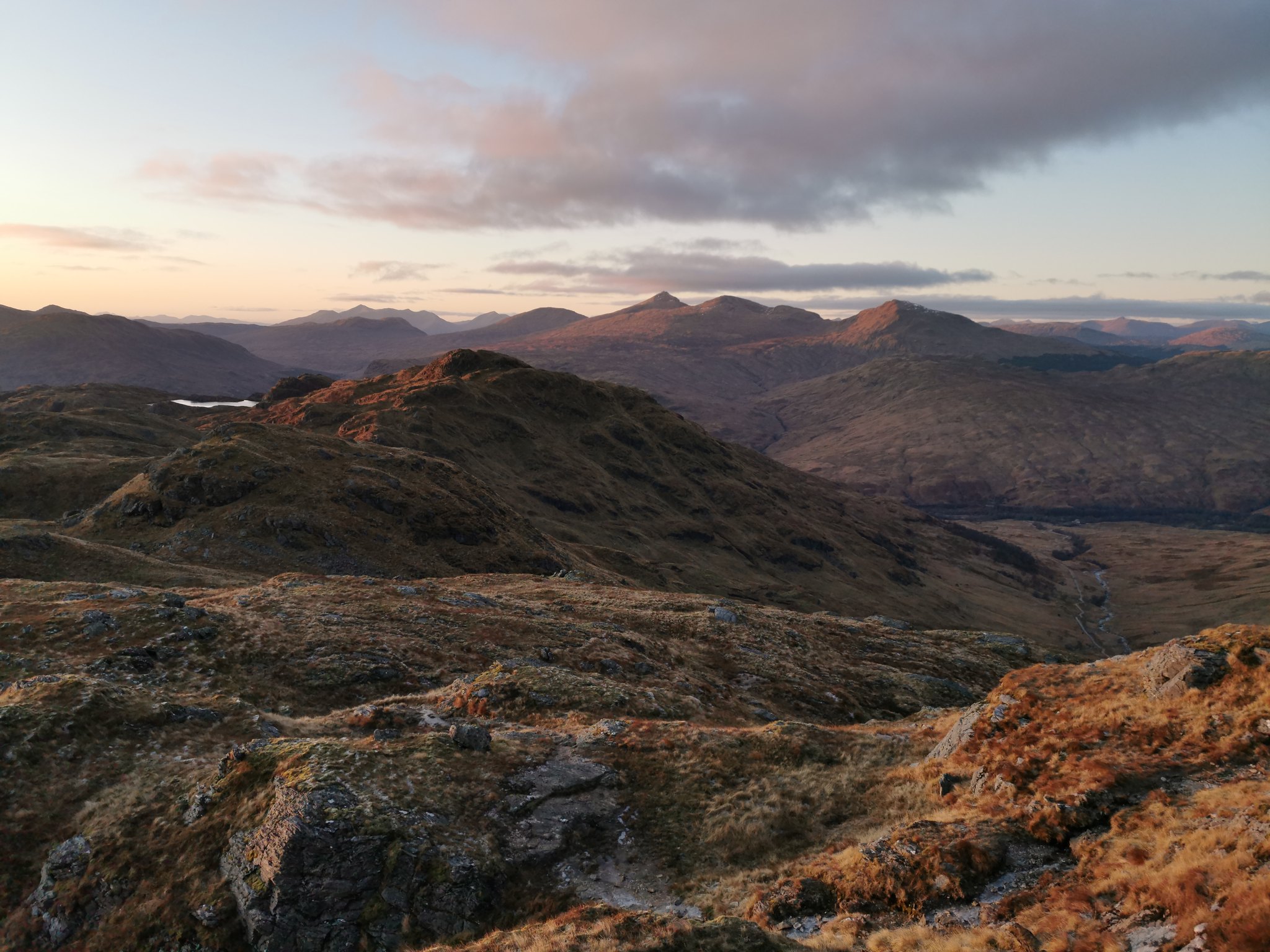 Ben Lui standing tall and looking majestic next to his pals 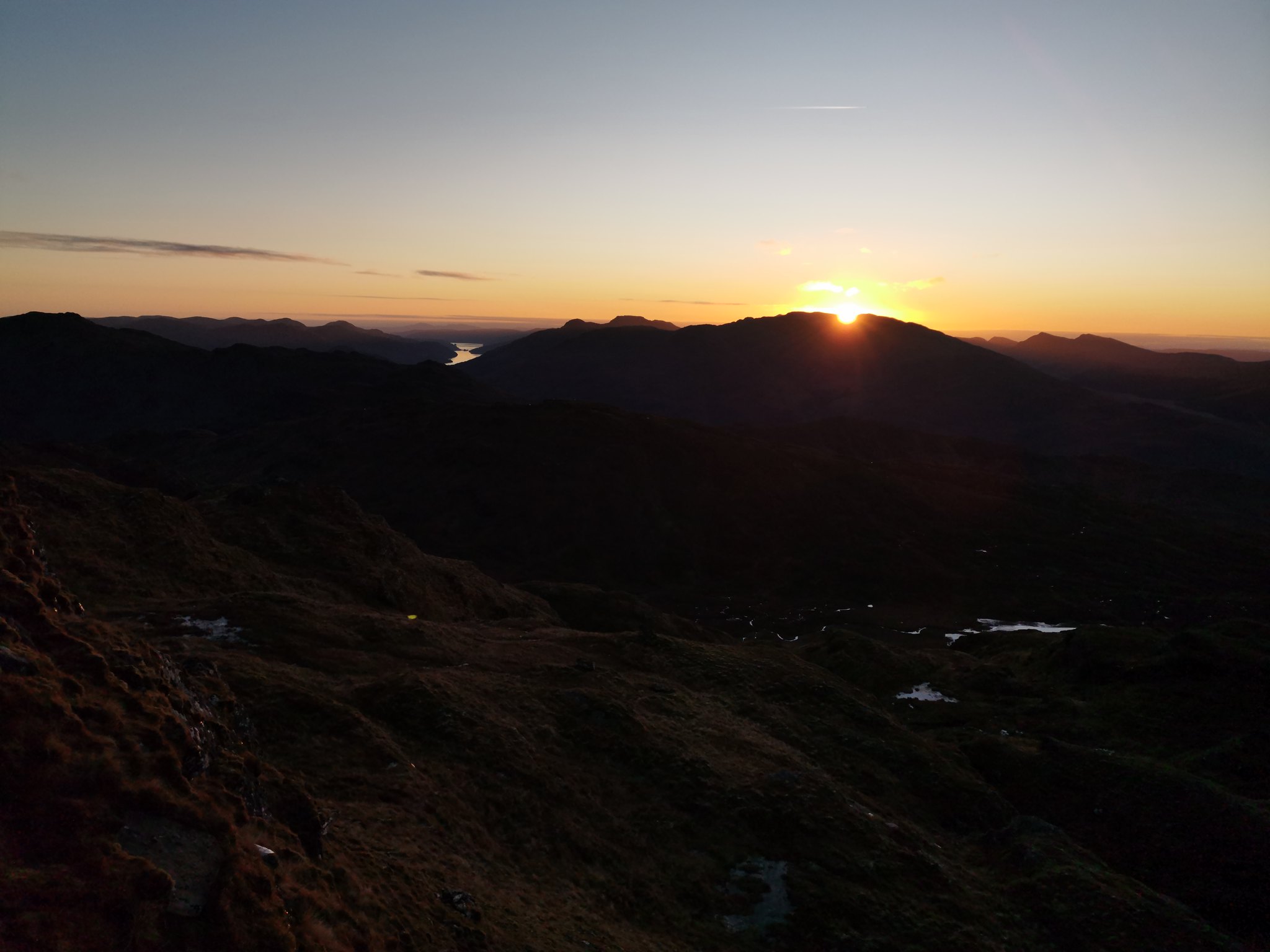 Approaching the final section, just about clinging on to the sun... 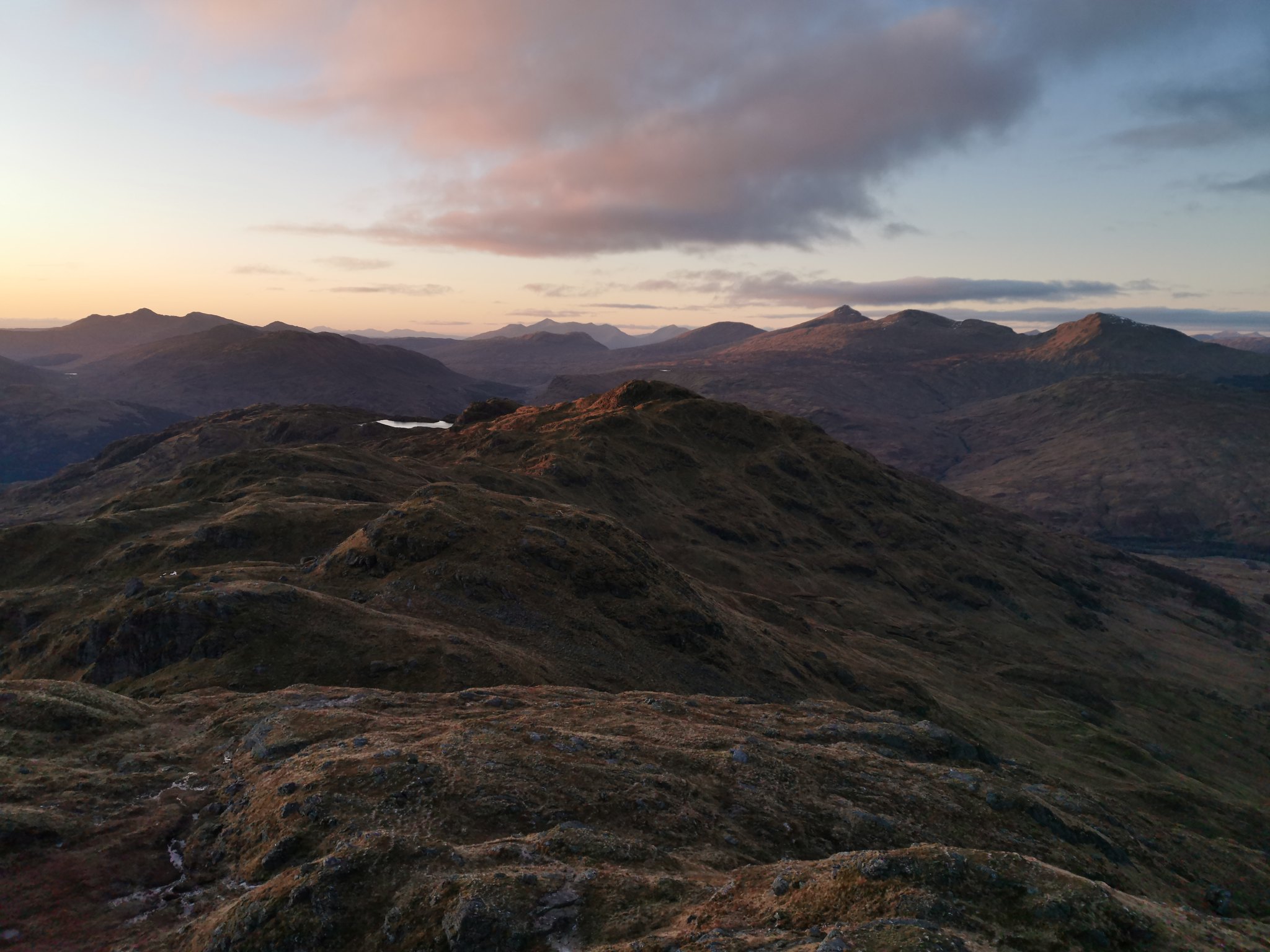 It would probably have helped my progress not to stop every 2 minutes to take pictures...

Well, as it turned out, despite absolutely sprinting the last bit to the summit, I missed the sun dropping out of view by about 5 minutes. No big drama however as the sky was absolutely beautiful in all directions. The air was super clear, not much wind to speak of, with orange, pink and darkening blue skies to keep my occupied until Laura appeared. What a viewpoint this is, fairly underrated from what I have read. 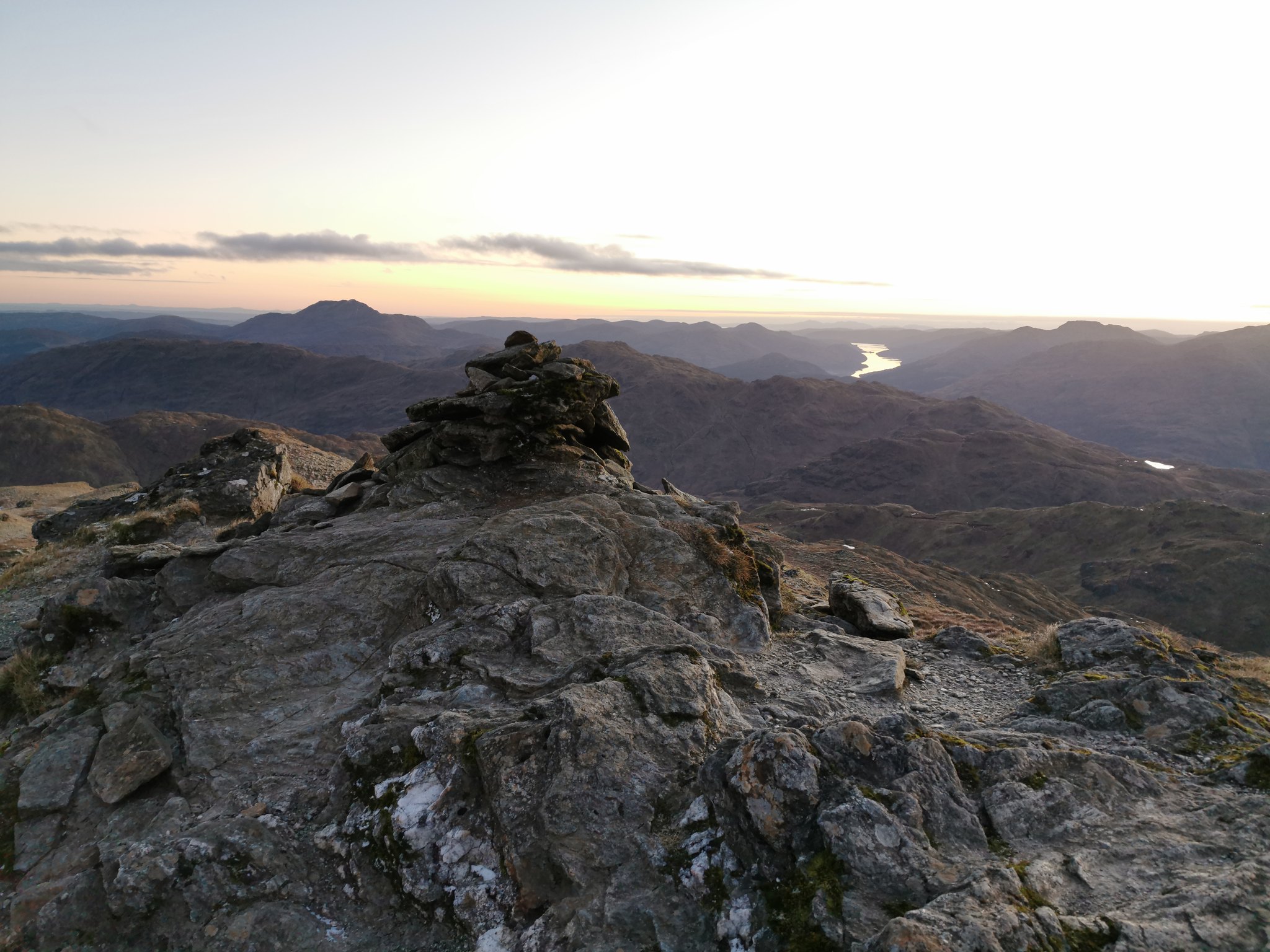 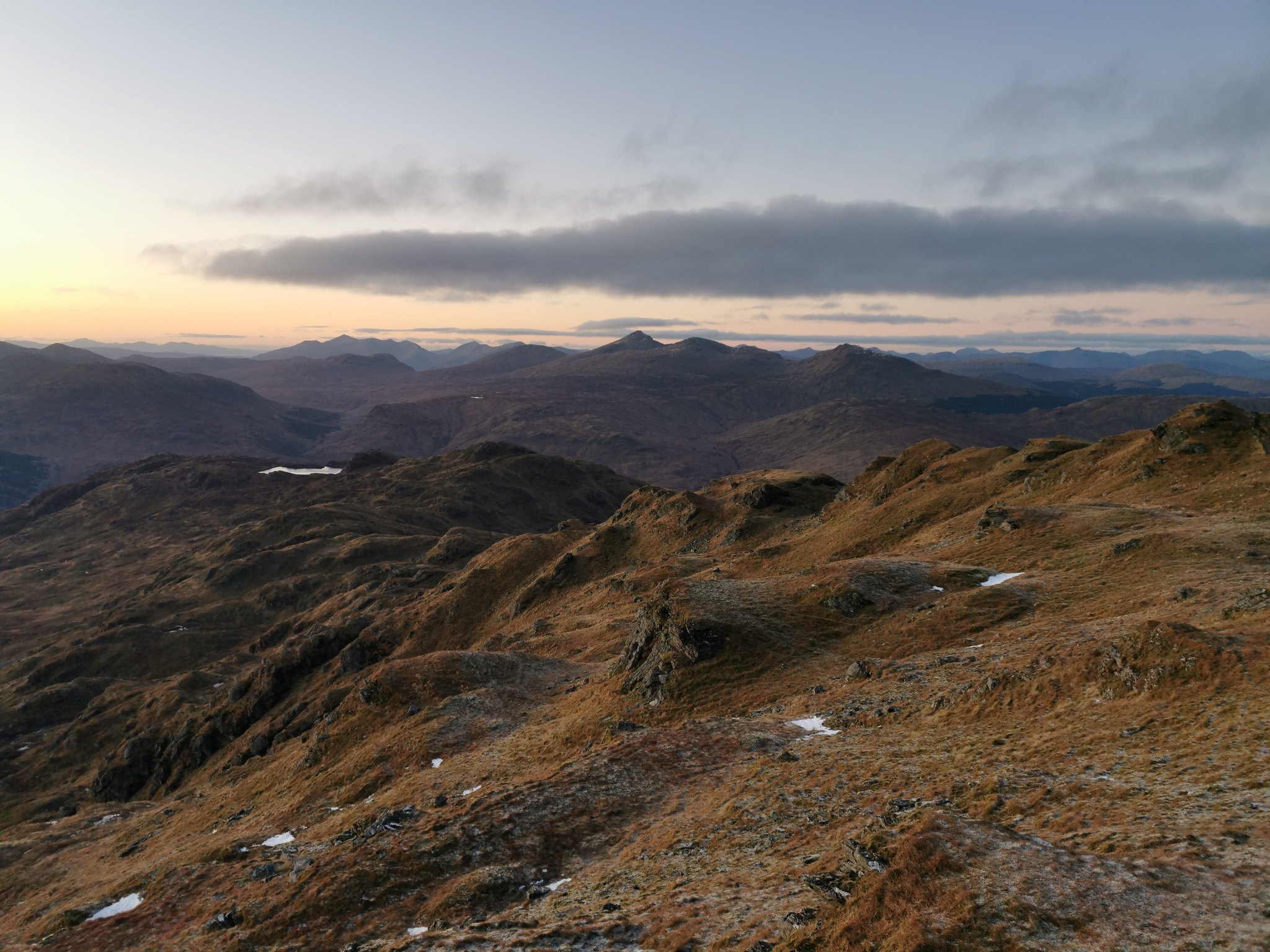 The seemingly never ending ridge to the summit 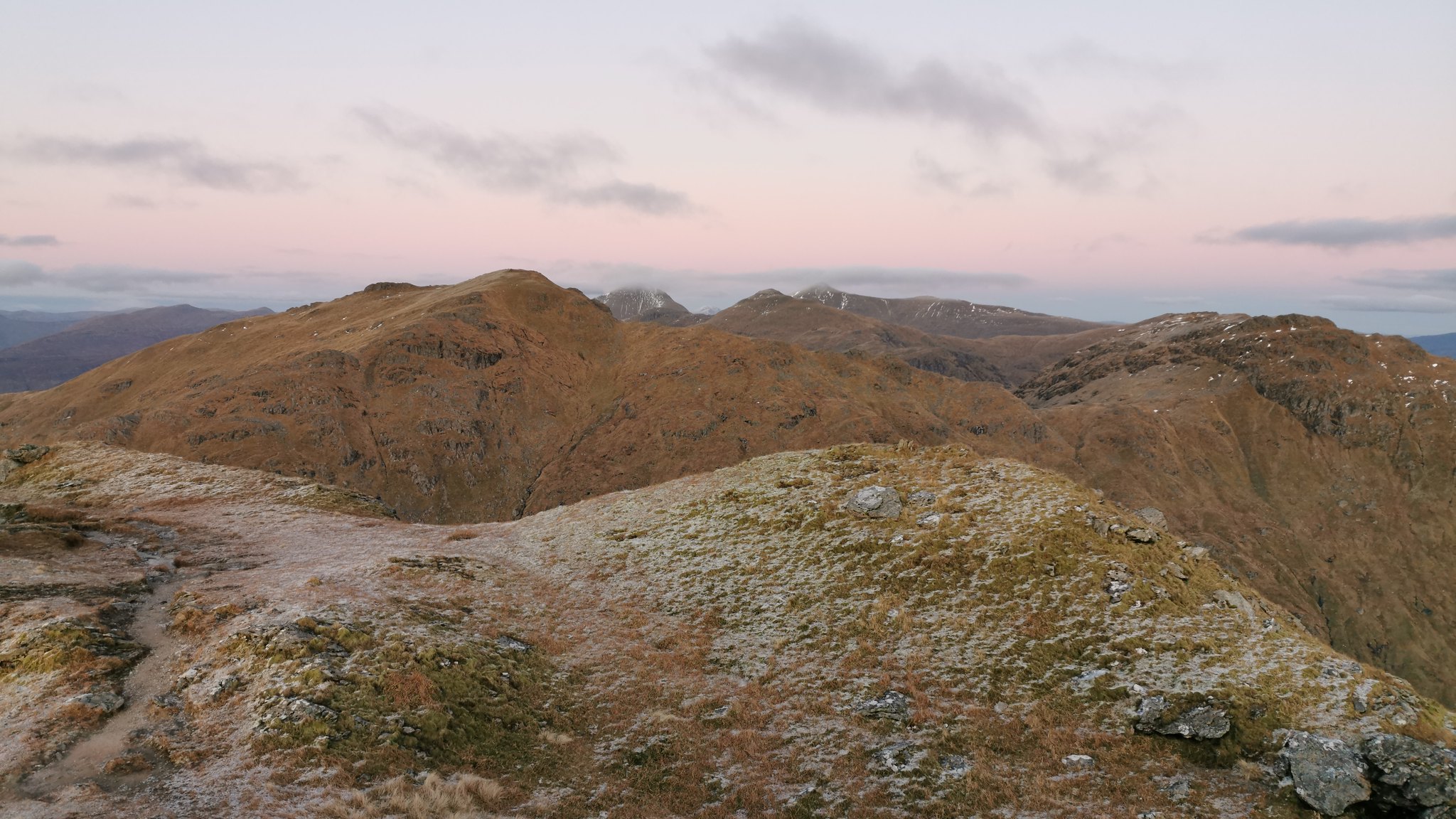 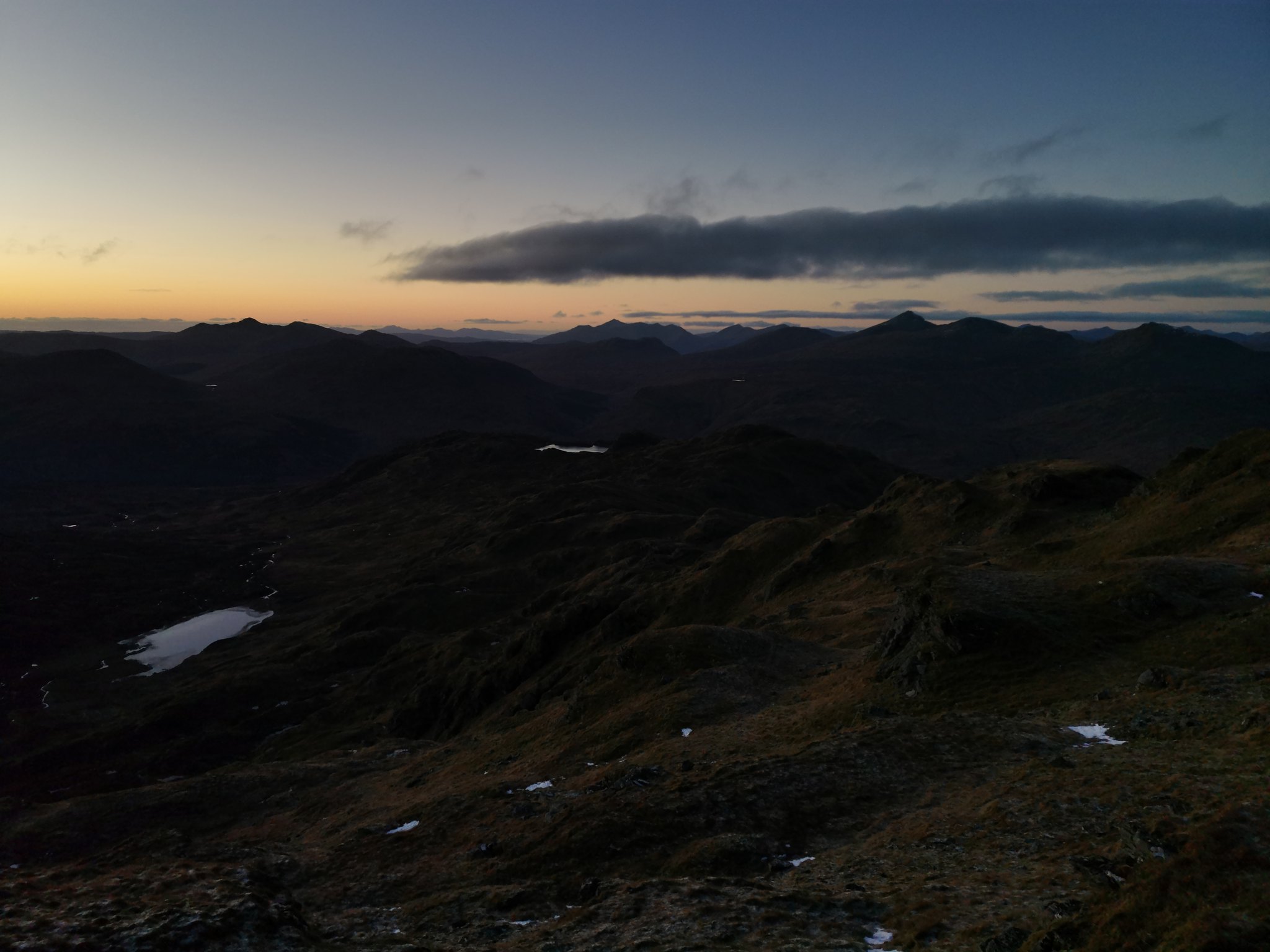 Summit picnic and coffee as the skies grew ever darker. Not a bad spot to spend a Friday night! 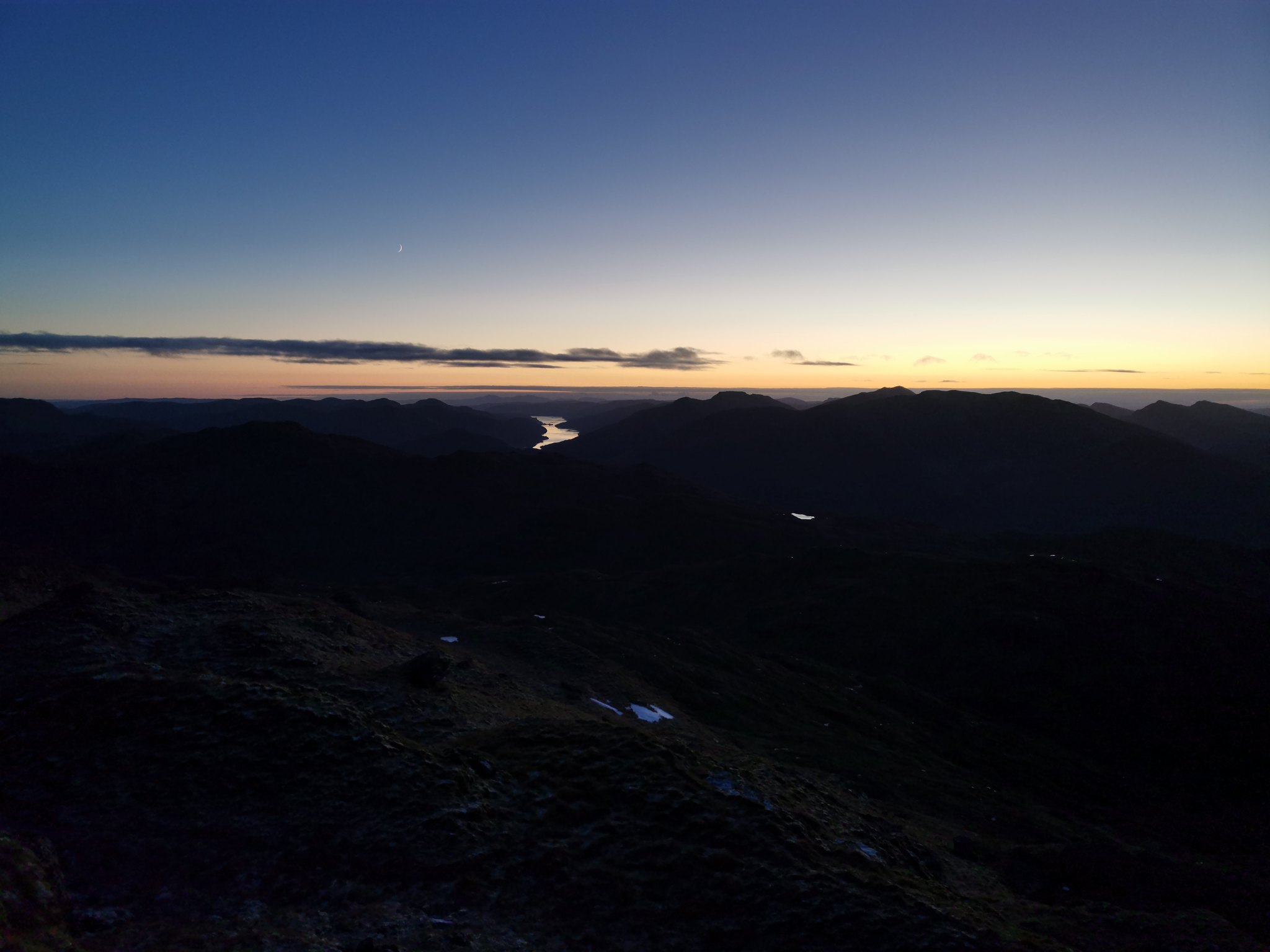 Getting dark, and probably about time to start the 2.5 - 3hr trek back to the car. 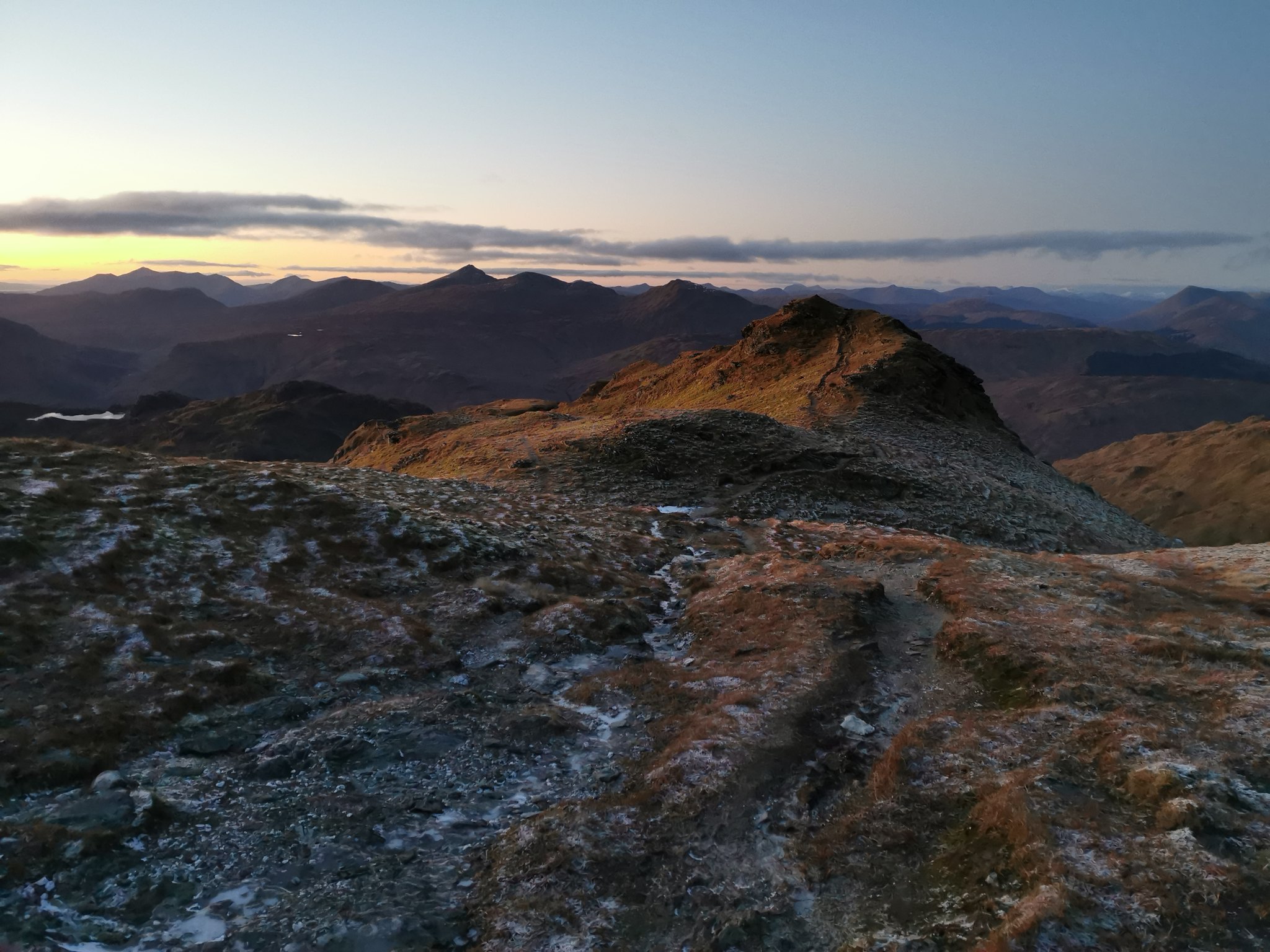 Starting back along the summit ridge, switching the camera to night mode now.

Within a few minutes of leaving the summit, it was head torch time, mainly due to the extensive amounts of thick ice on the path which weren't always as obvious as big boulders! It was nice to not be in any hurry at all anymore though, the sun had been and gone and it would soon be black dark. I was hopeful for a starry sky, which certainly came out in force once it was totally dark. Wow, what a sky! 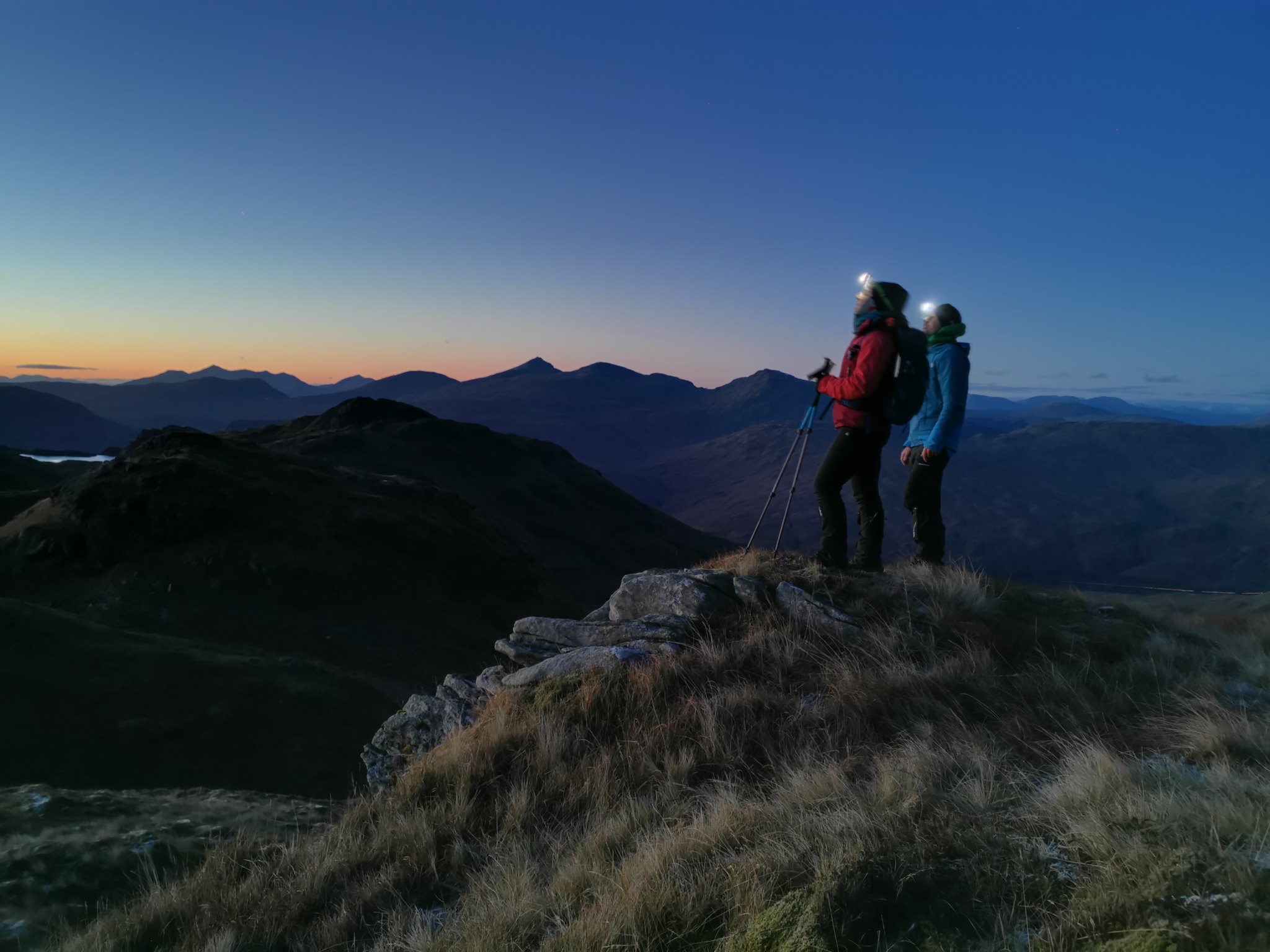 Having a good old faff about in the near darkness. 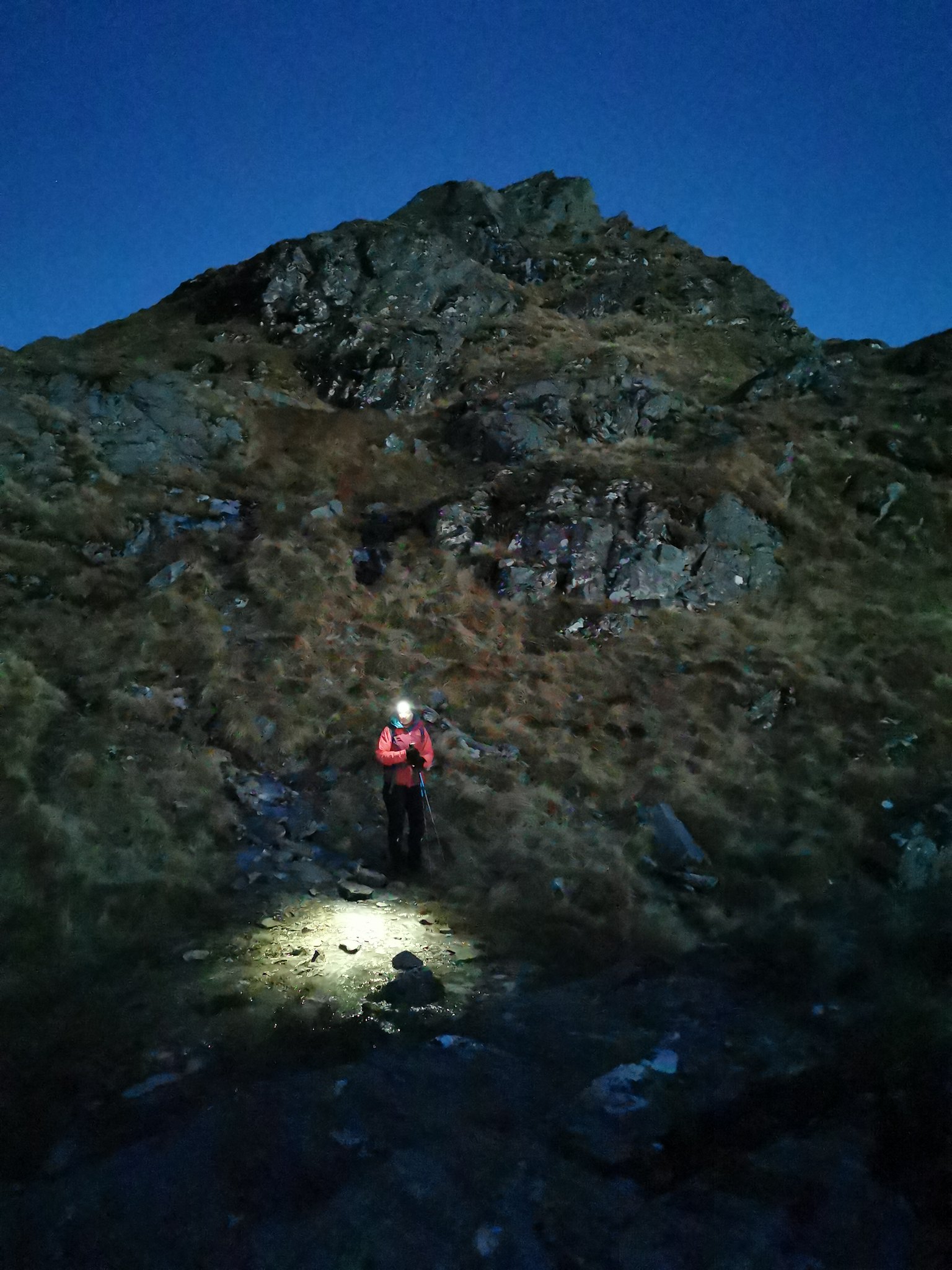 Laura descending in the dark

I made various attempts to photograph the sky, but it never really happened, so I gave up and stopped faffing about. We made it back down the track, which was now welcome in the darkness. As the A82 grew ever nearer, it was fairly busy with convoys of vehicles in either direction. As it turned out, the road was fairly quiet heading south, so our power walk to the car wasn't too bad.

At 7.25pm and 6hrs and 20mins after starting out, our day was done. The only final panic was reaching Mhor Fish in Callander to find that it was closed, and then making the other chip shop with one minute to spare before it closed...phew!!

We arrived home at 9.20pm, already with a plan to set the alarm at 5am for Beinn Bhuidhe the next day. The weather was too good not to...