After about 5 hours sleep following a sunset walk up Beinn Chabhair the night before (https://www.walkhighlands.co.uk/Forum/viewtopic.php?f=9&t=93988), my alarm went off at 5am for another trip west to climb Beinn Bhuidhe on another cold and clear winter's day. Due to the fairly lengthy road/track up Glen Fyne, Paul and I took the mountain bikes to save some time in the Glen.

About 8am, we arrived at the car park near the brewery at the end of Loch Fyne. It was absolutely freezing, the car showed -4 degrees when we parked up, and had been as low as -7 on the drive west. After setting off on the bikes, we tried to warm ourselves up but weren't going long before we encountered a bit of a problem... 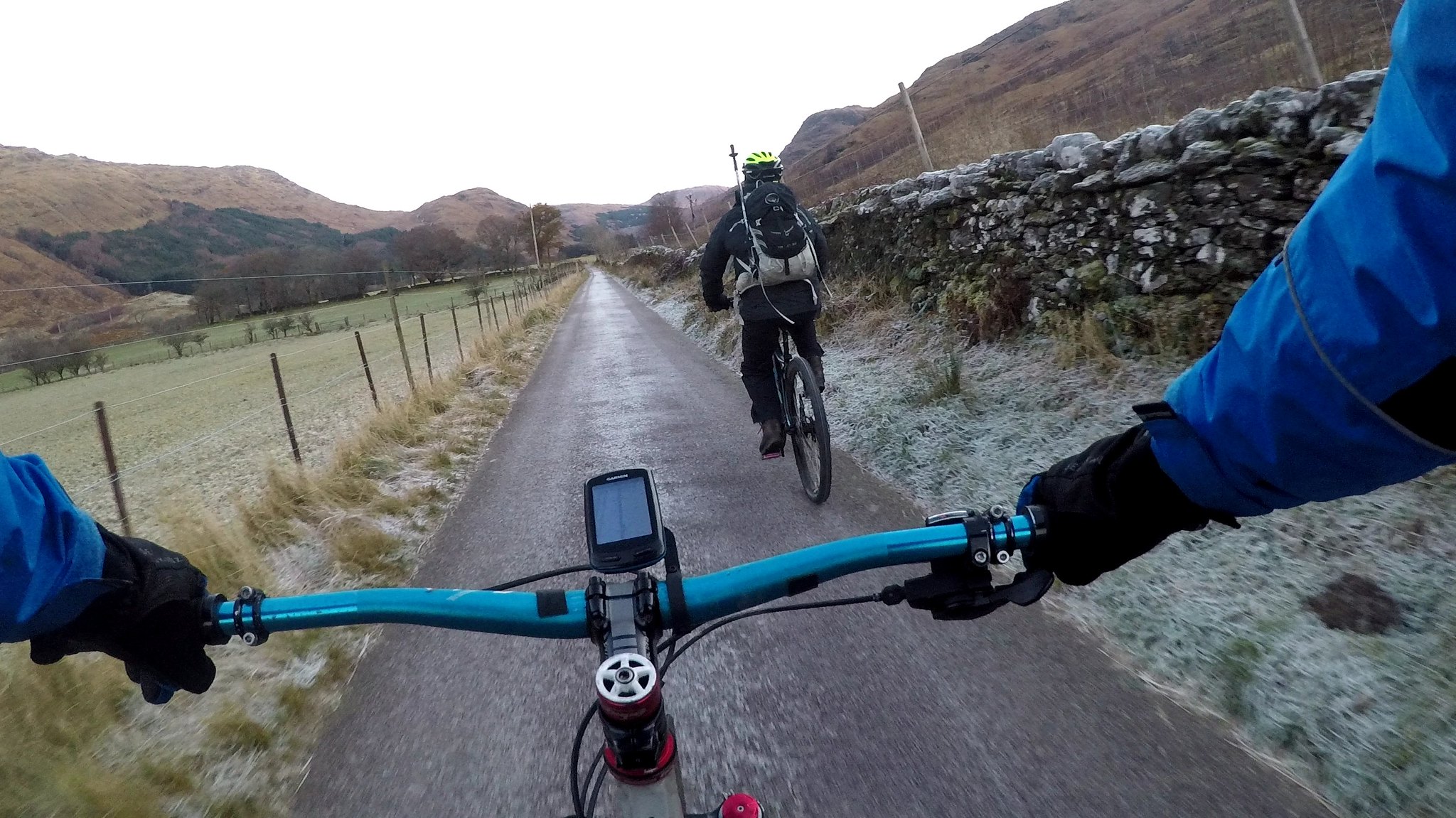 Setting off up the Glen, very cold in the shade and a frosty road. 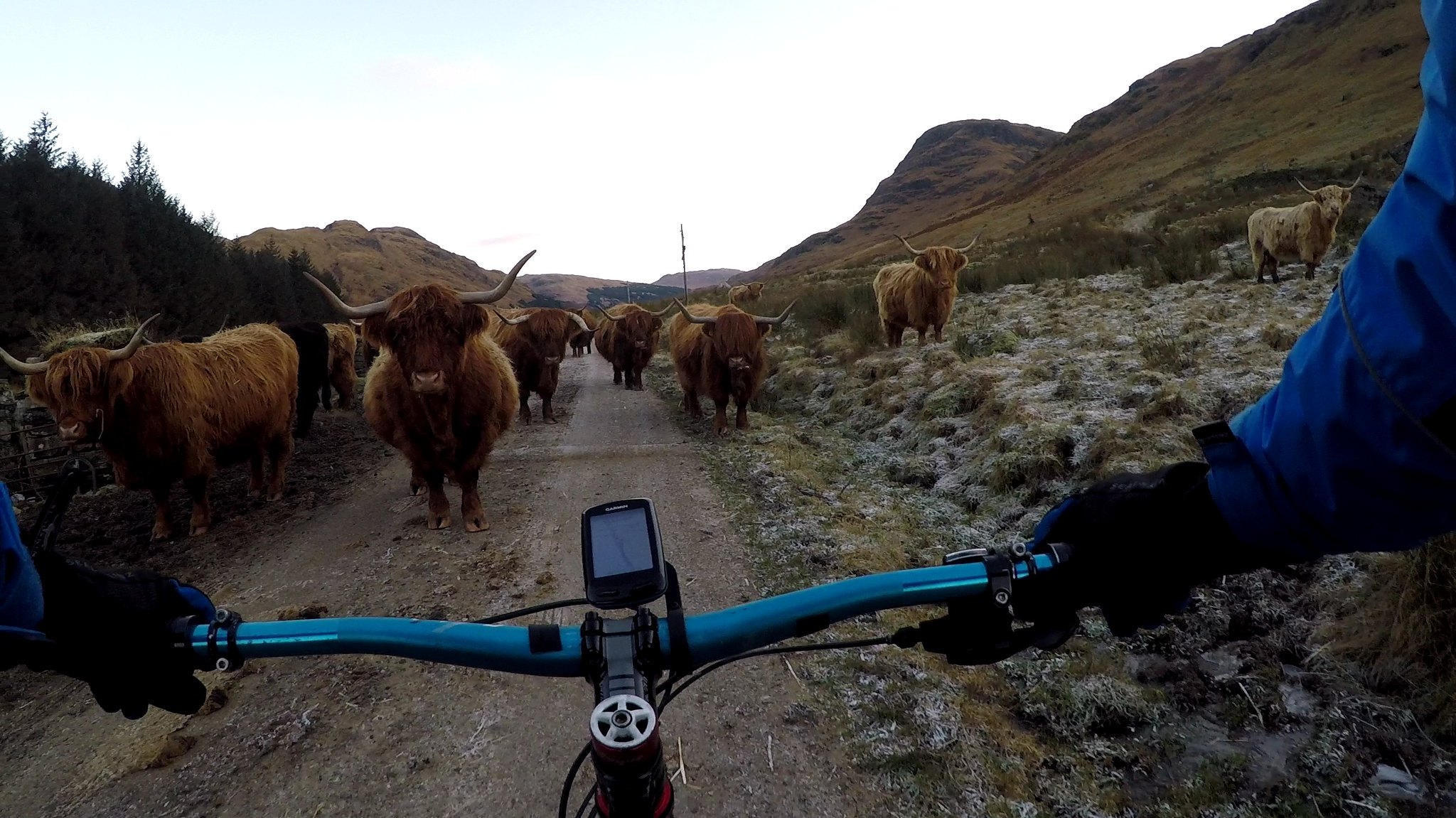 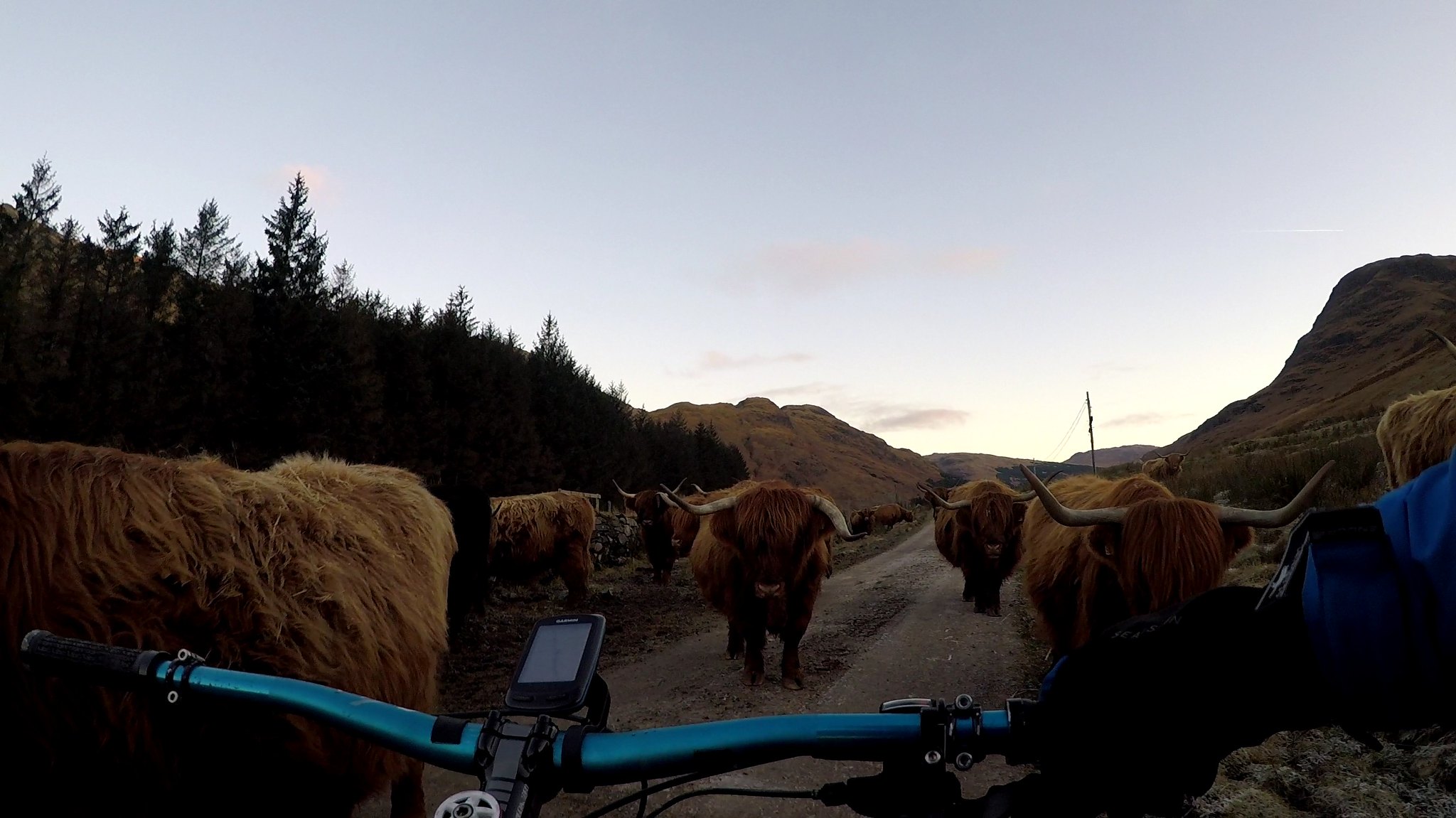 Walking my way in and out of the maze of sharp horns...

After semi-nervously wading through the middle of the road block and nudging past sharp horns, we were through to safety on the other side! Ha, the cows gave absolutely zero notice. Anyway, onwards up the Glen to the old sheep house to dump our bikes. Cycling distance was 4.5 miles. 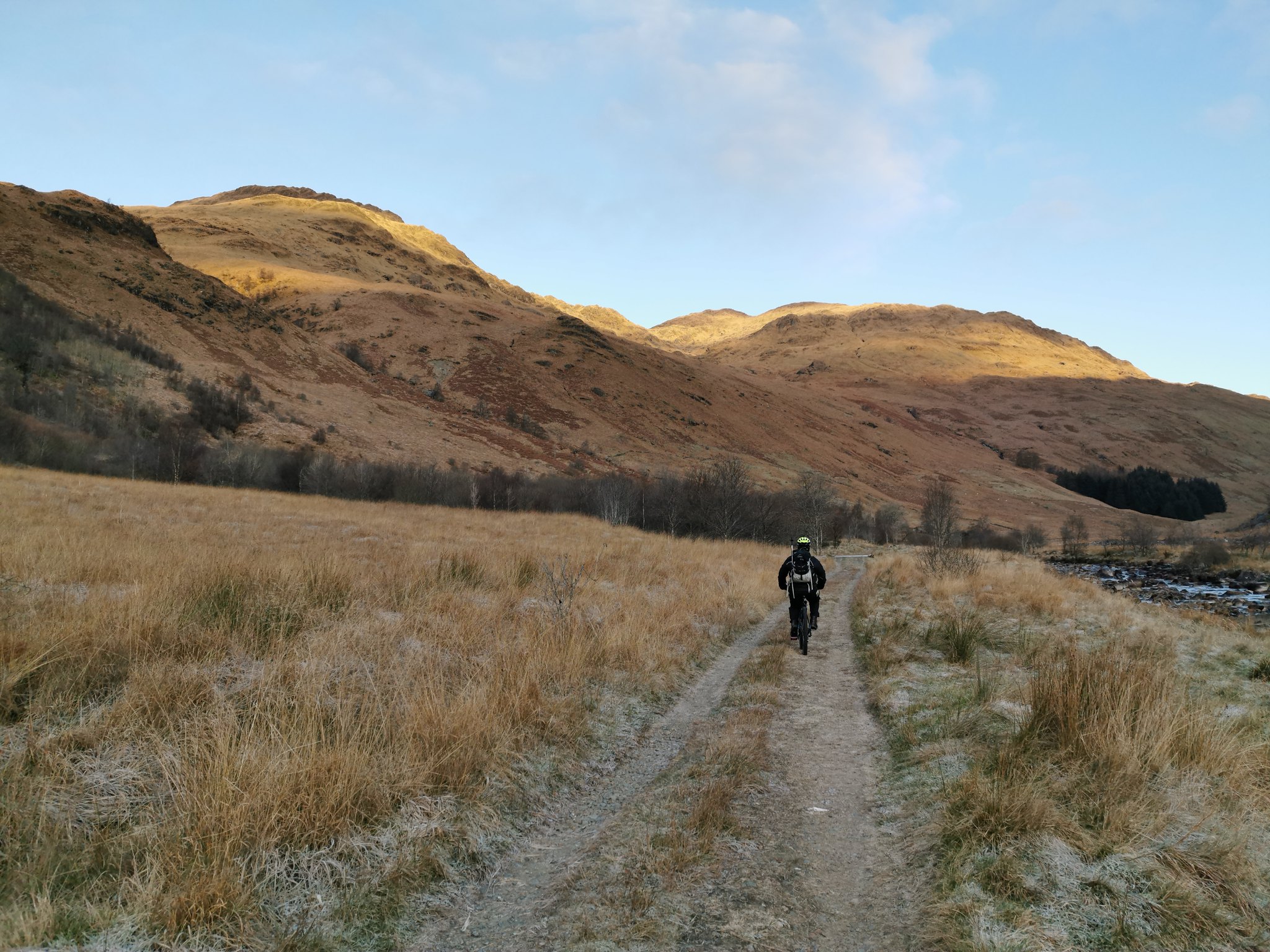 We then started up the hill path up the side of the gorge, which is very steep and quite technical in places, so progress was much slower than we had both anticipated. At one point, there is a semi-exposed scramble around a rocky outcrop with a fair drop down to the gorge below. We opted for a 5 minute detour up and around it, which has certainly been done before. The rock was slippy and icy so no point taking any risks before the hill even started! 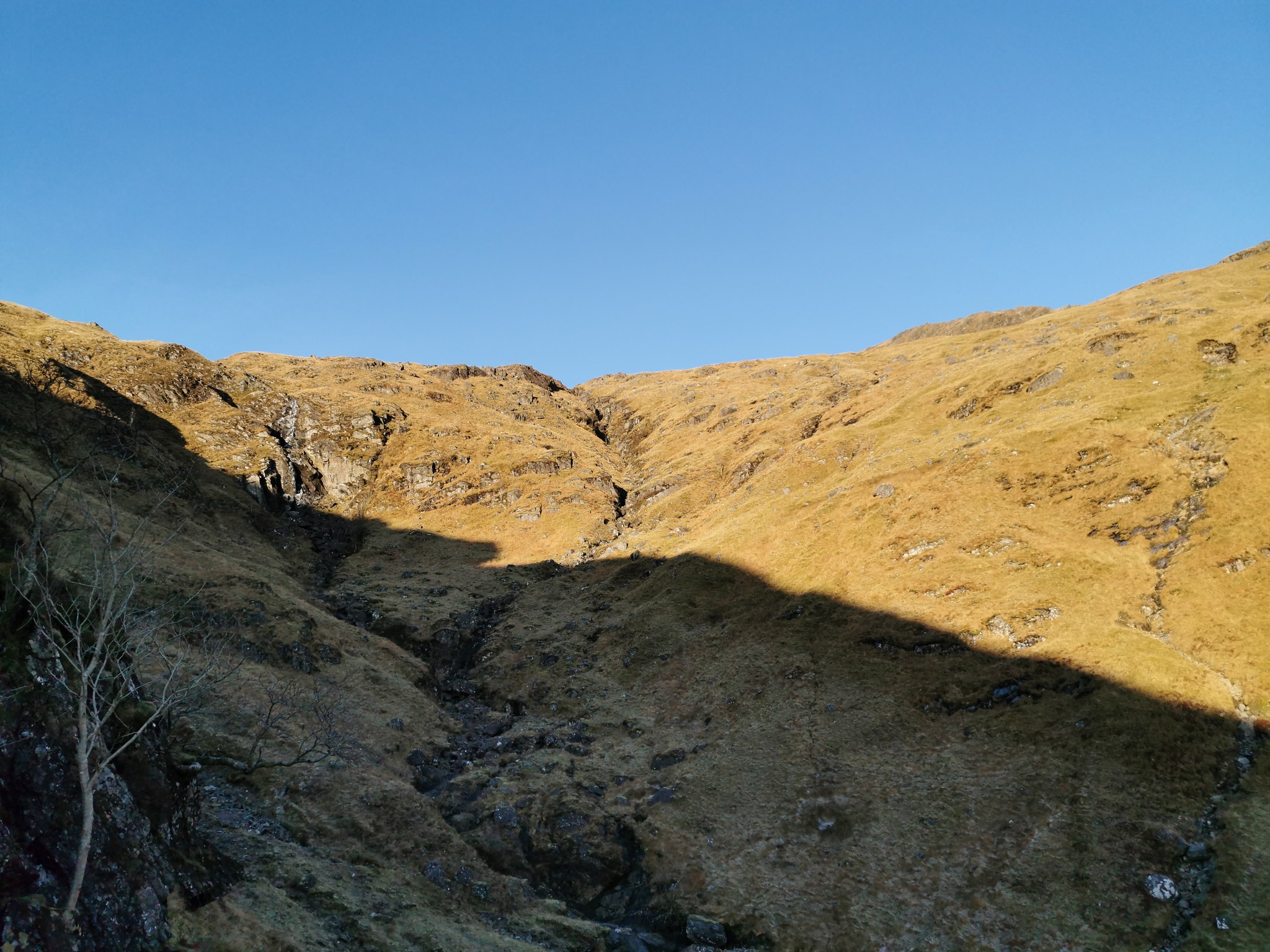 Slowly gaining height up the steep, icy path towards the sunlit slopes.

When we reached the plateau at the top of the corrie, we crossed a fire track which I had read could be used for the ascent via a different route. It kinda comes out of nowhere and is an ugly scar across the hill. Anyway, thankfully the hill path just crosses it and then starts to head up very steeply towards the summit ridge of Beinn Bhuidhe. This was a bit of a nightmare since everything was frozen, so it was a total ice rink and required a lot of care. At this point, Paul started getting some cramp in his leg, so we took plenty of breaks and took our time up to the top of the ridge.

Annoyingly, the crystal clear blue skies had given way to some wispy cloud flowing over the tops, and the wind had picked up which was mega cold. More layers and down jacket was called into action for the final hike to the top. Being honest, we were both a bit surprised how long this hill took, mostly due to the steepness of the terrain and the ice grinding us to a crawl at times. It's definitely not a hill to underestimate. Approaching the summit, the cloud was coming and going and made for some atmospheric conditions. 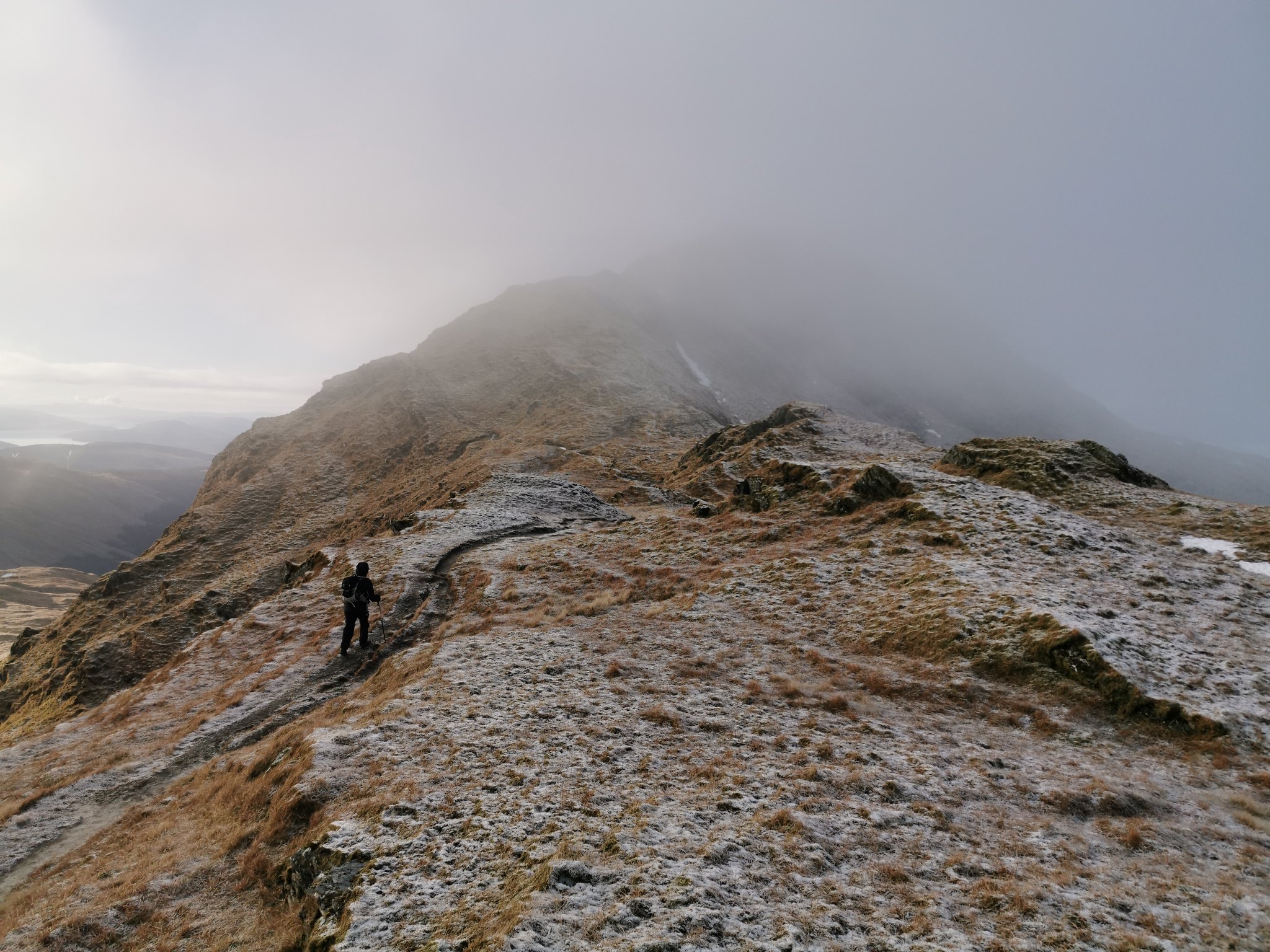 Paul striding out towards the top 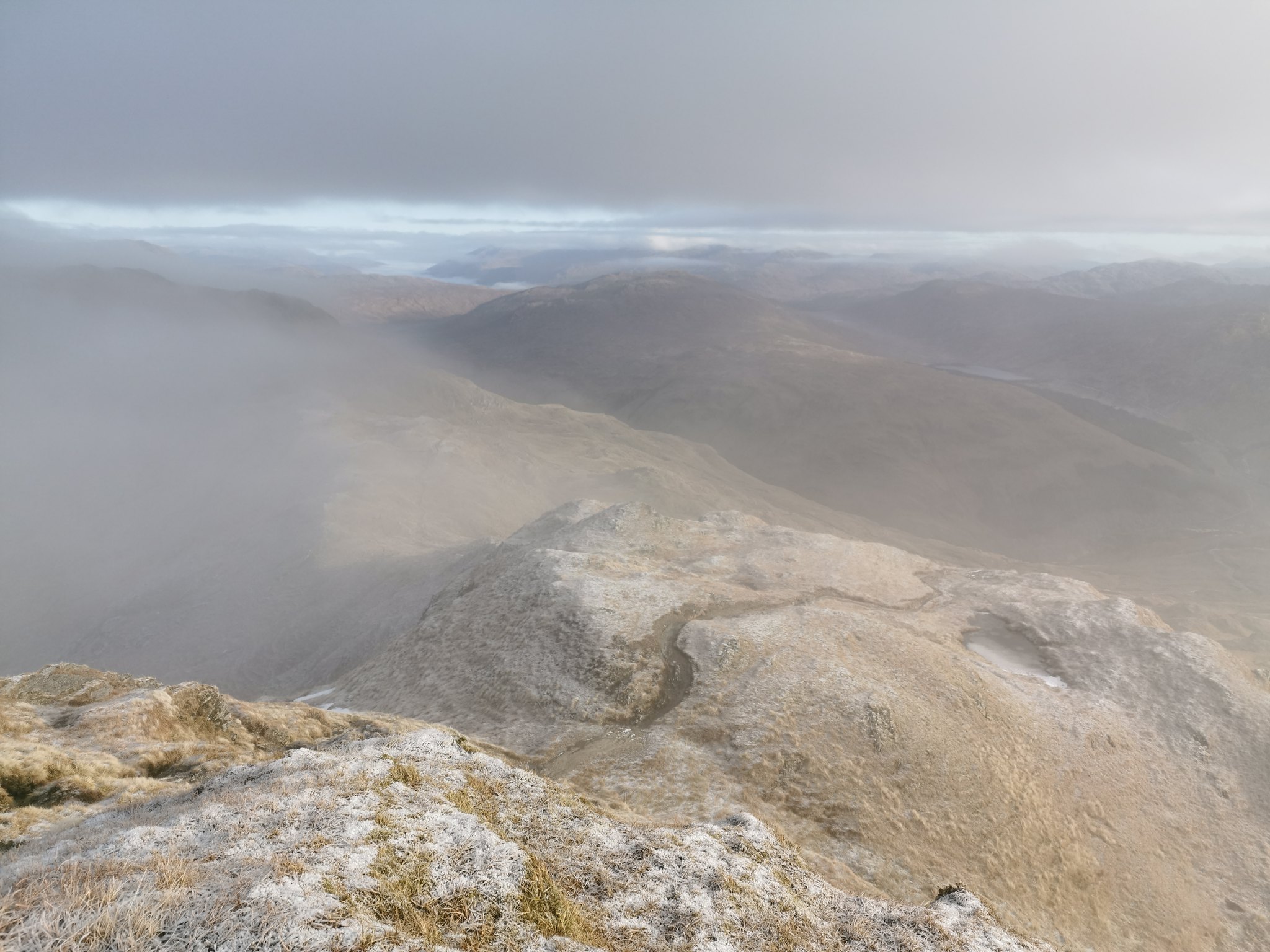 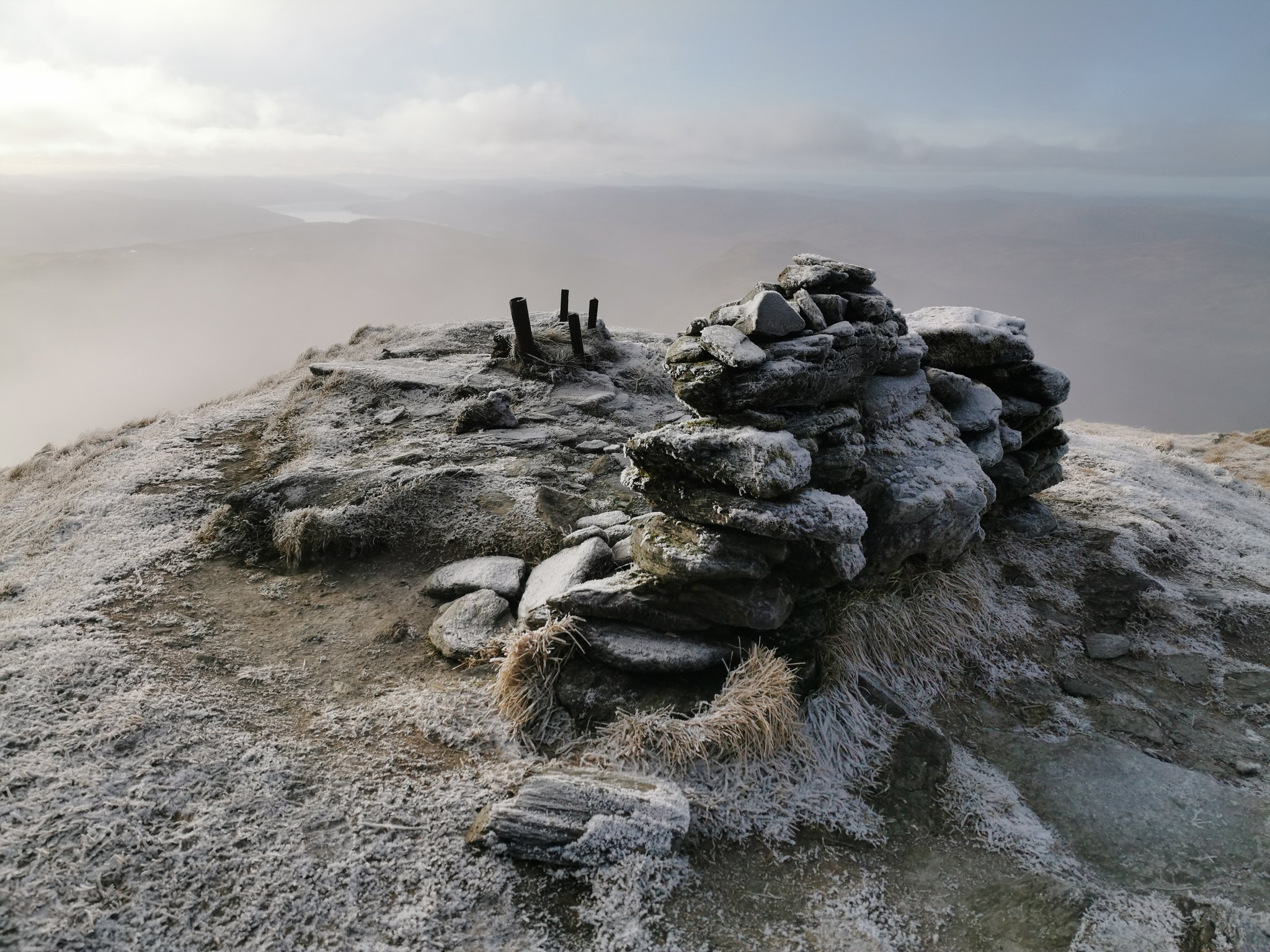 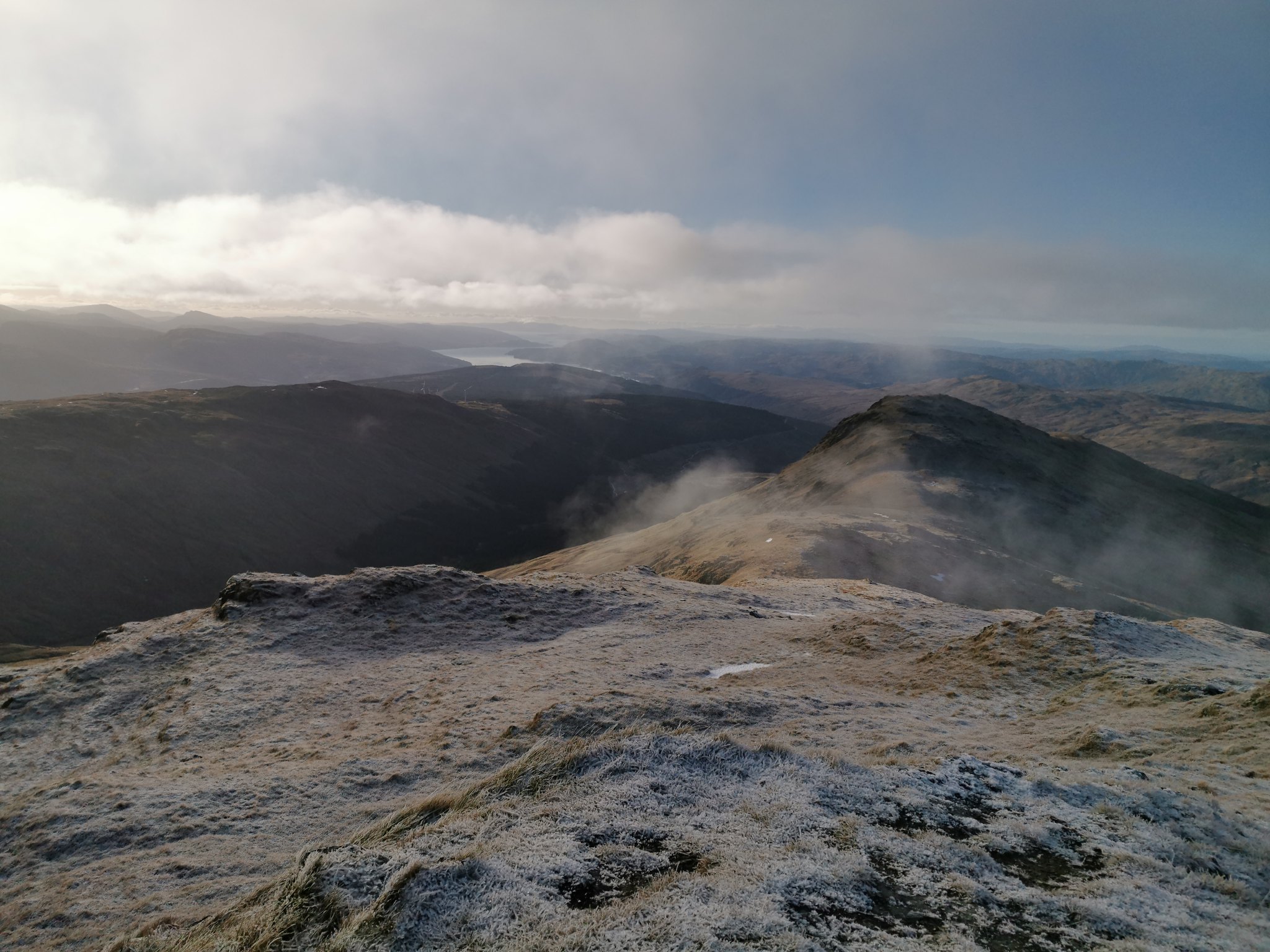 After 3hrs 35mins from leaving the car, we finally made it to the summit. The wind was bitterly cold, but the views were still good for a few seconds in between the light cloud coming and going. After a couple of minutes at the summit, we both suddenly noticed a BROCKEN SPECTRE behind us

Yaaasssssss!!! Suddenly running about like a kid at Christmas, we both started frantically taking photos and videos before it disappeared, but it stubbornly stayed put, coming and going a little for our full time at the summit. It's only taken me about 200 munro summits, as well as other hills, to see this so it absolutely made my day! 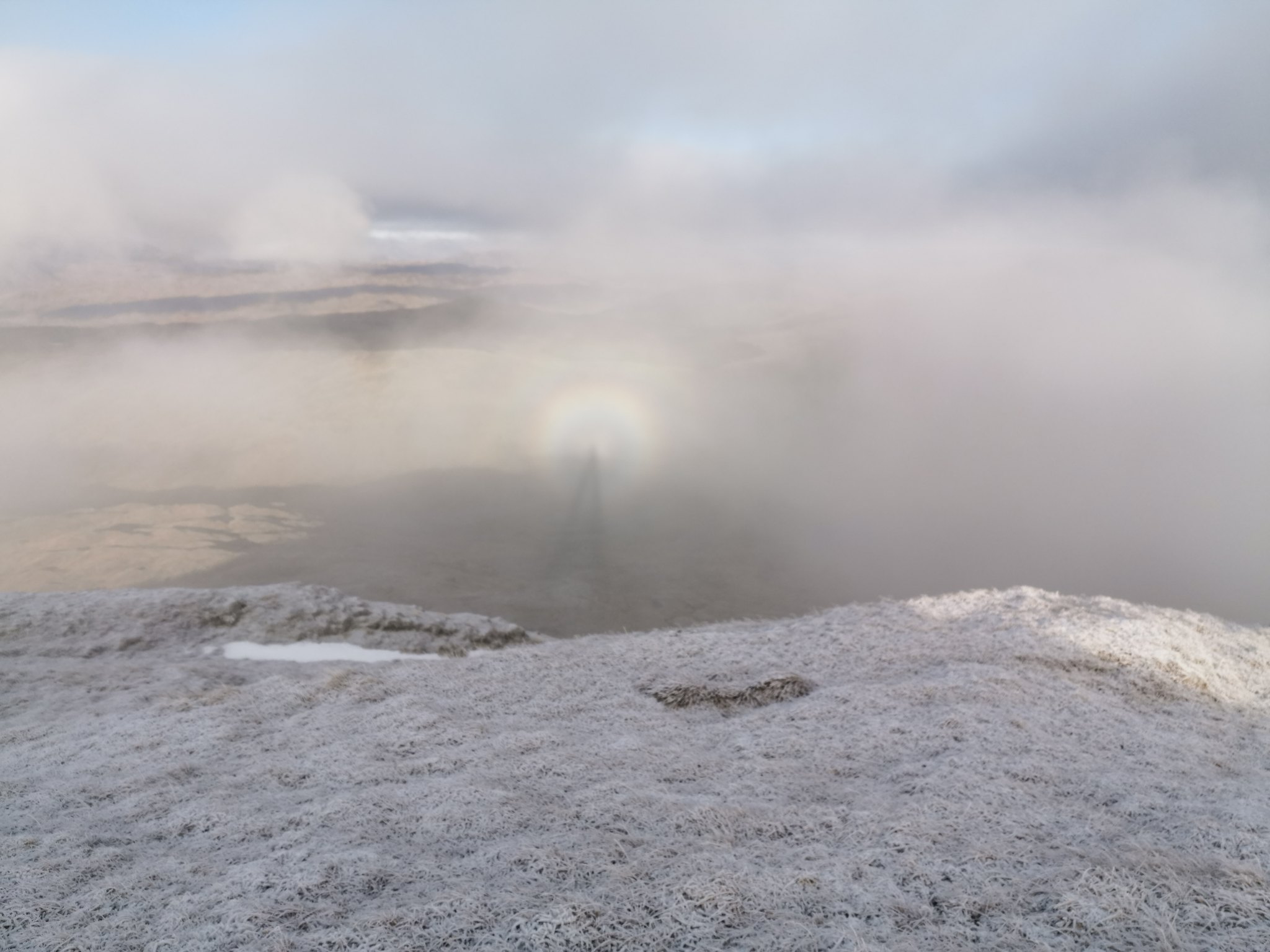 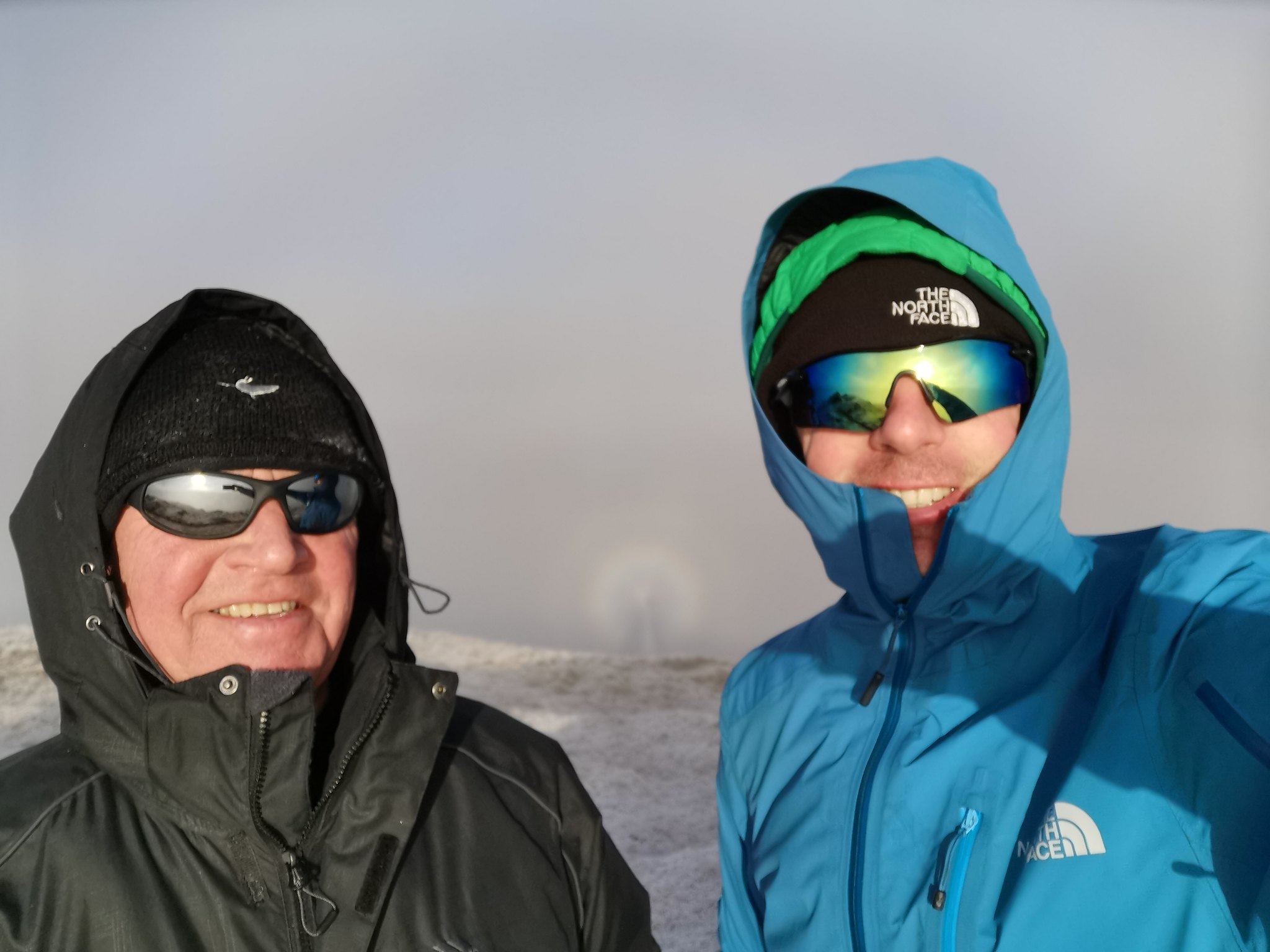 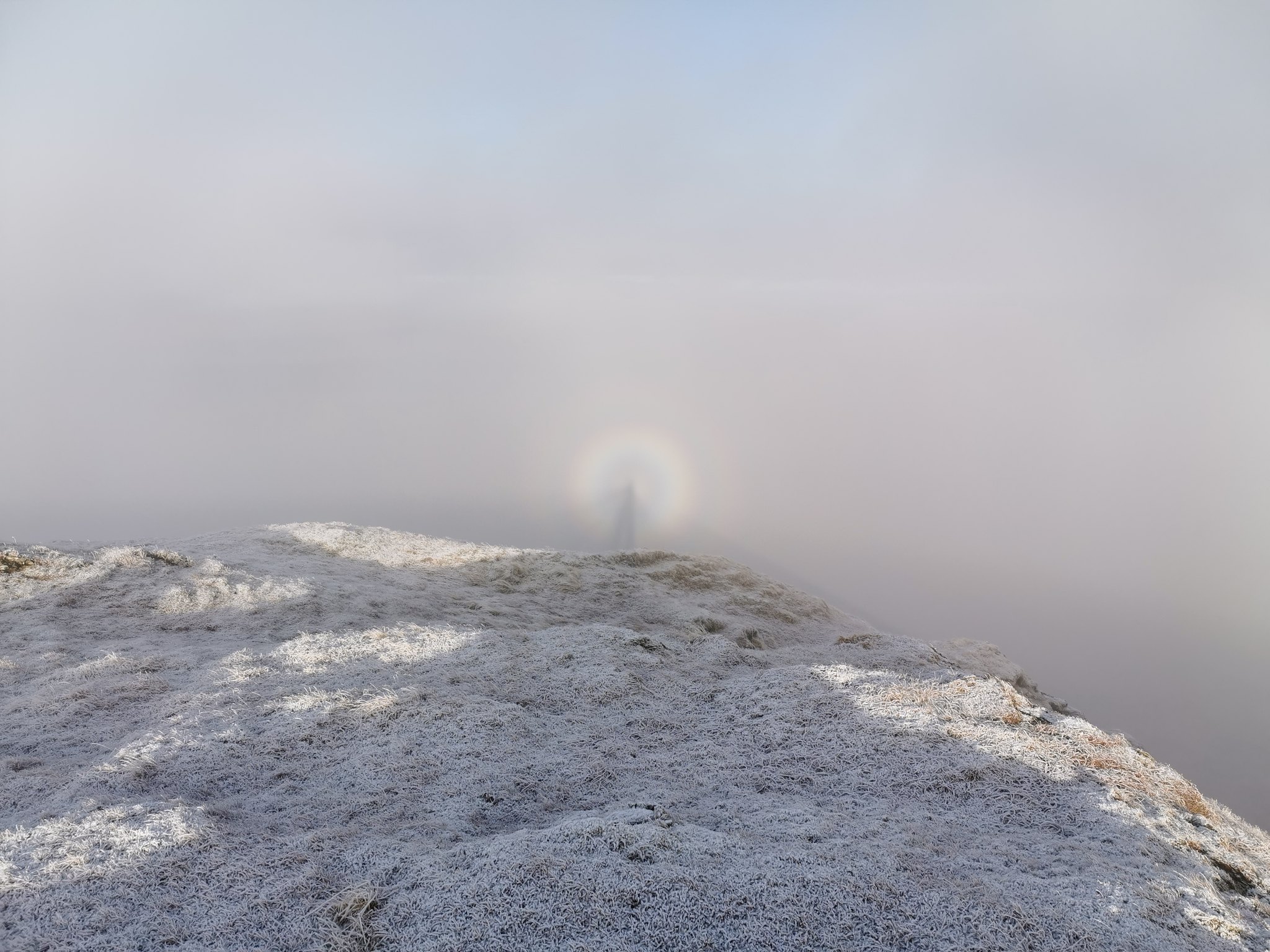 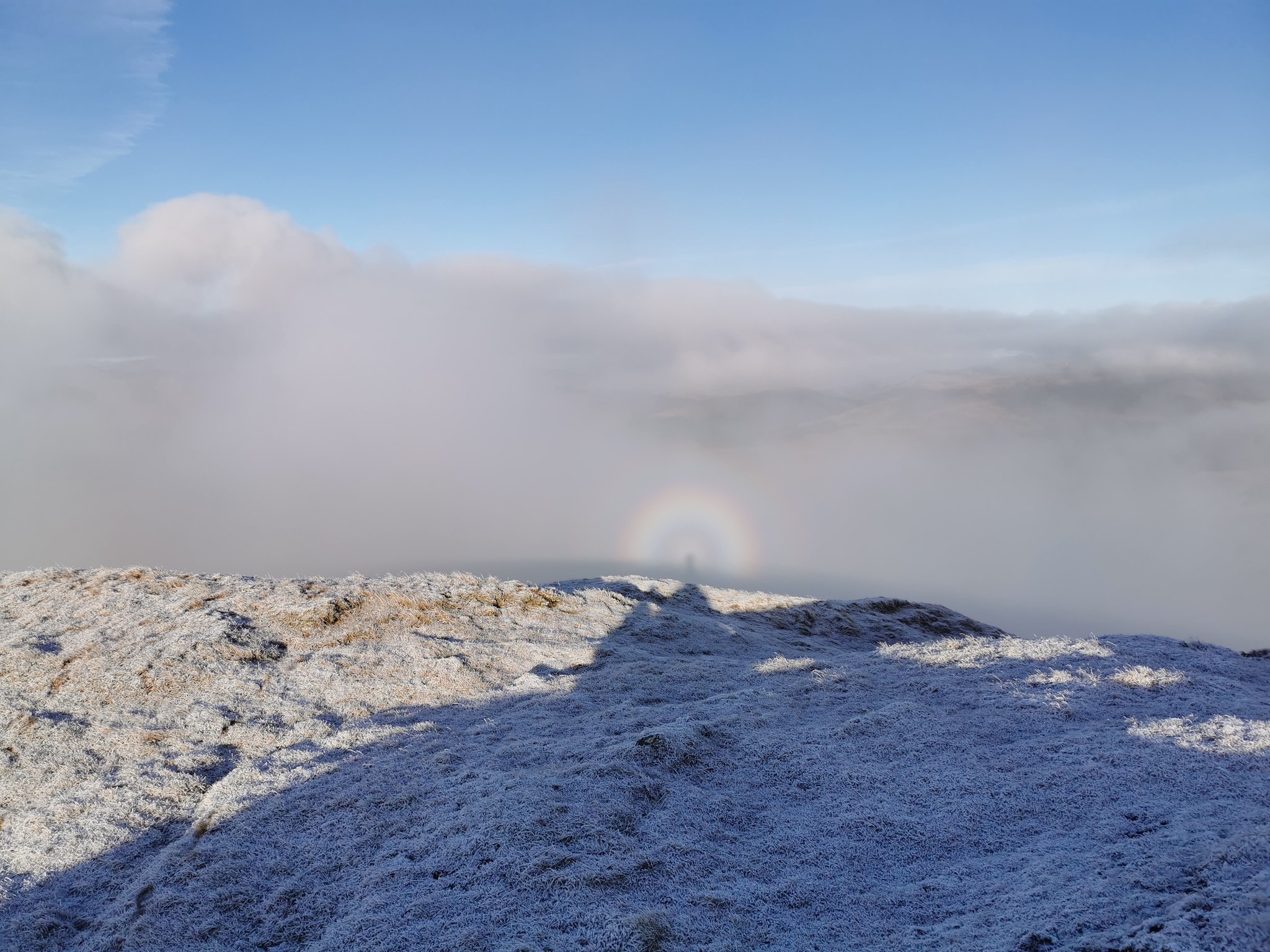 The weather could have done anything at this point and my day would have been totally made, but the cloud started to clear and give us extensive views in all directions, the air was so clear it was an amazing experience to see. After spending a long time at the summit taking in the sights and spectres, we started ambling down trying to restore some feeling in our frozen fingers from all the photo taking. My fingers were actual agony, but it was worth it!! 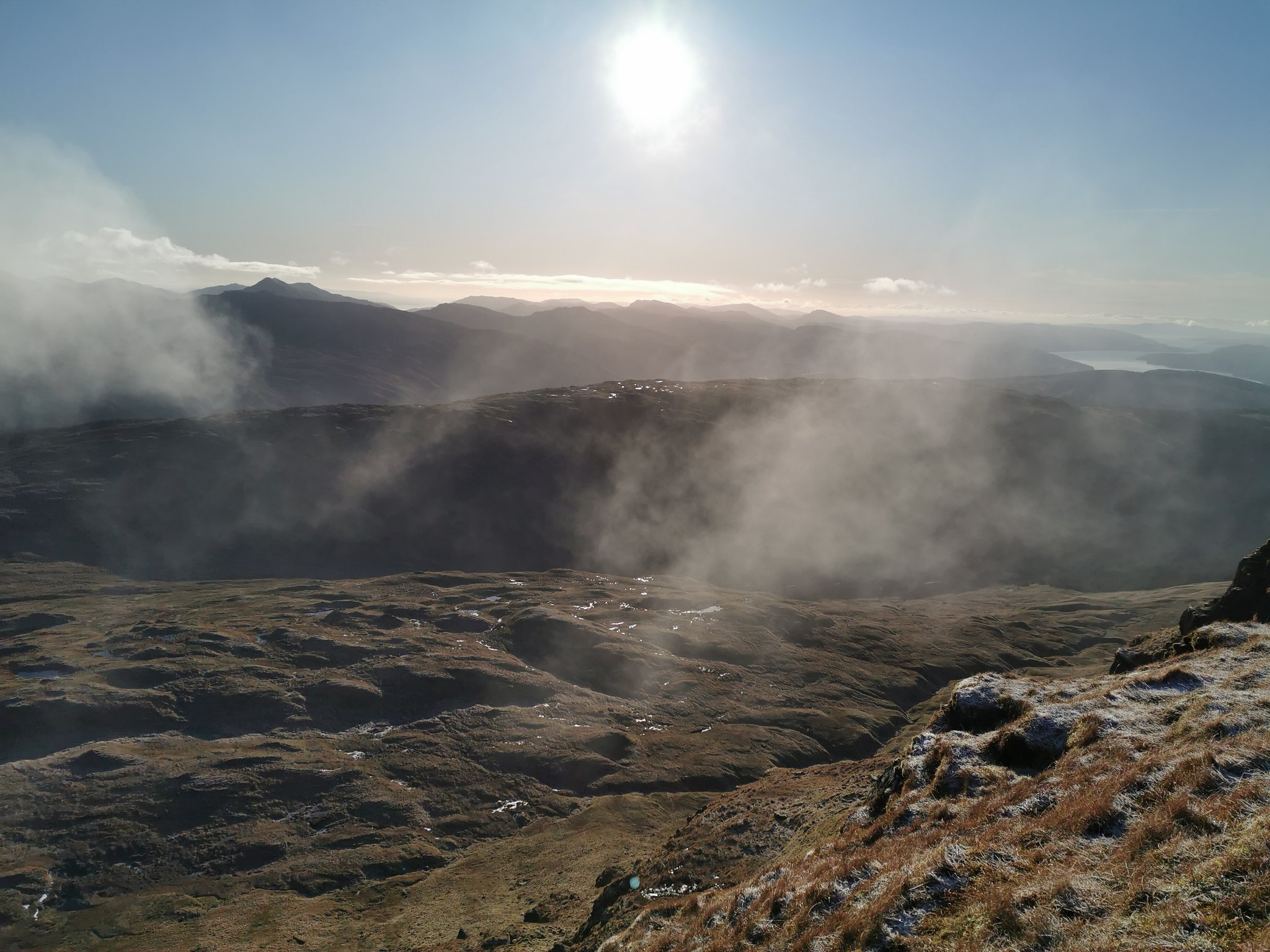 Return of the clear skies. 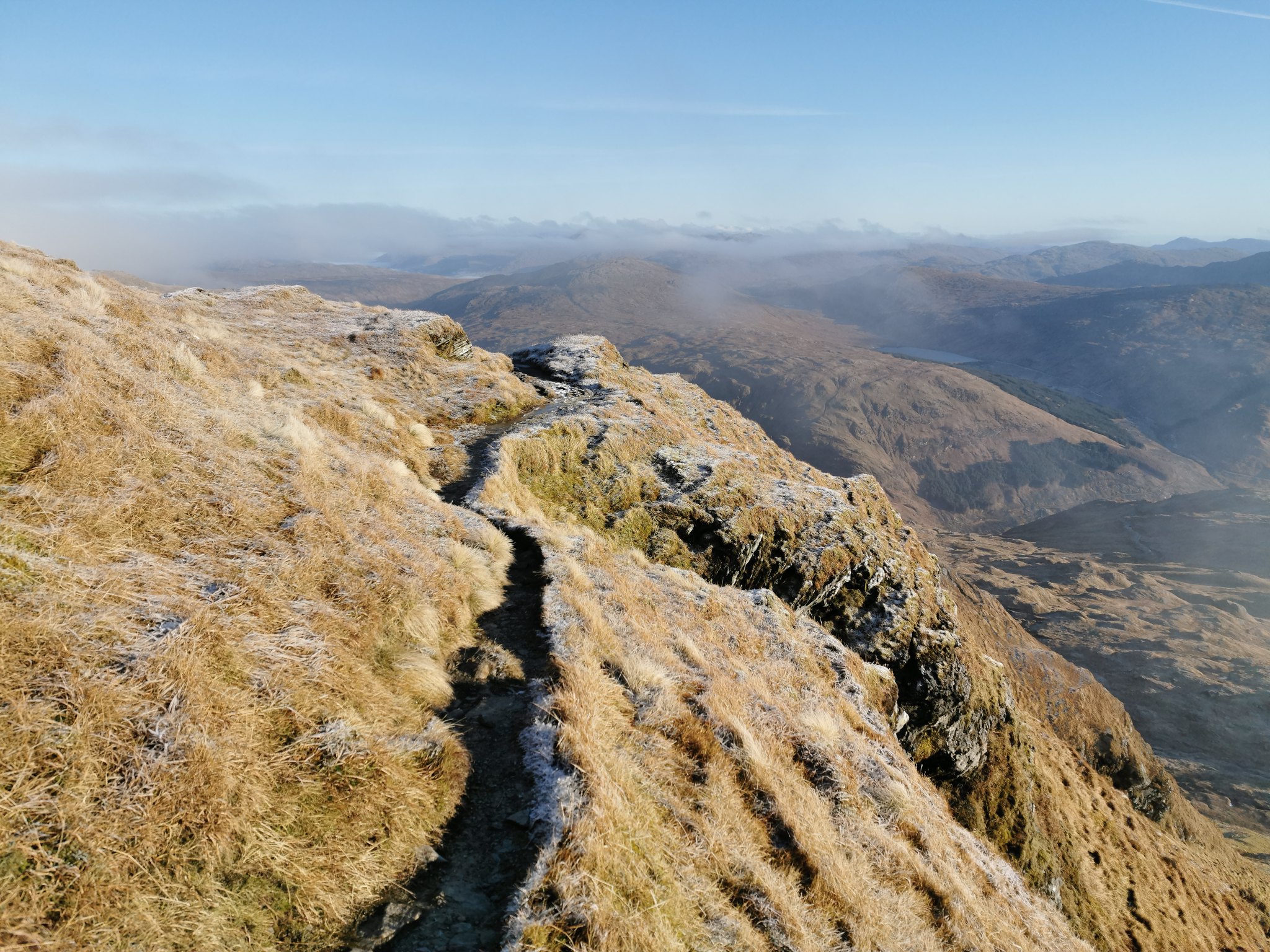 Thicker cloud over the Crianlarich hills and Beinn Chabhair where I was the evening before. 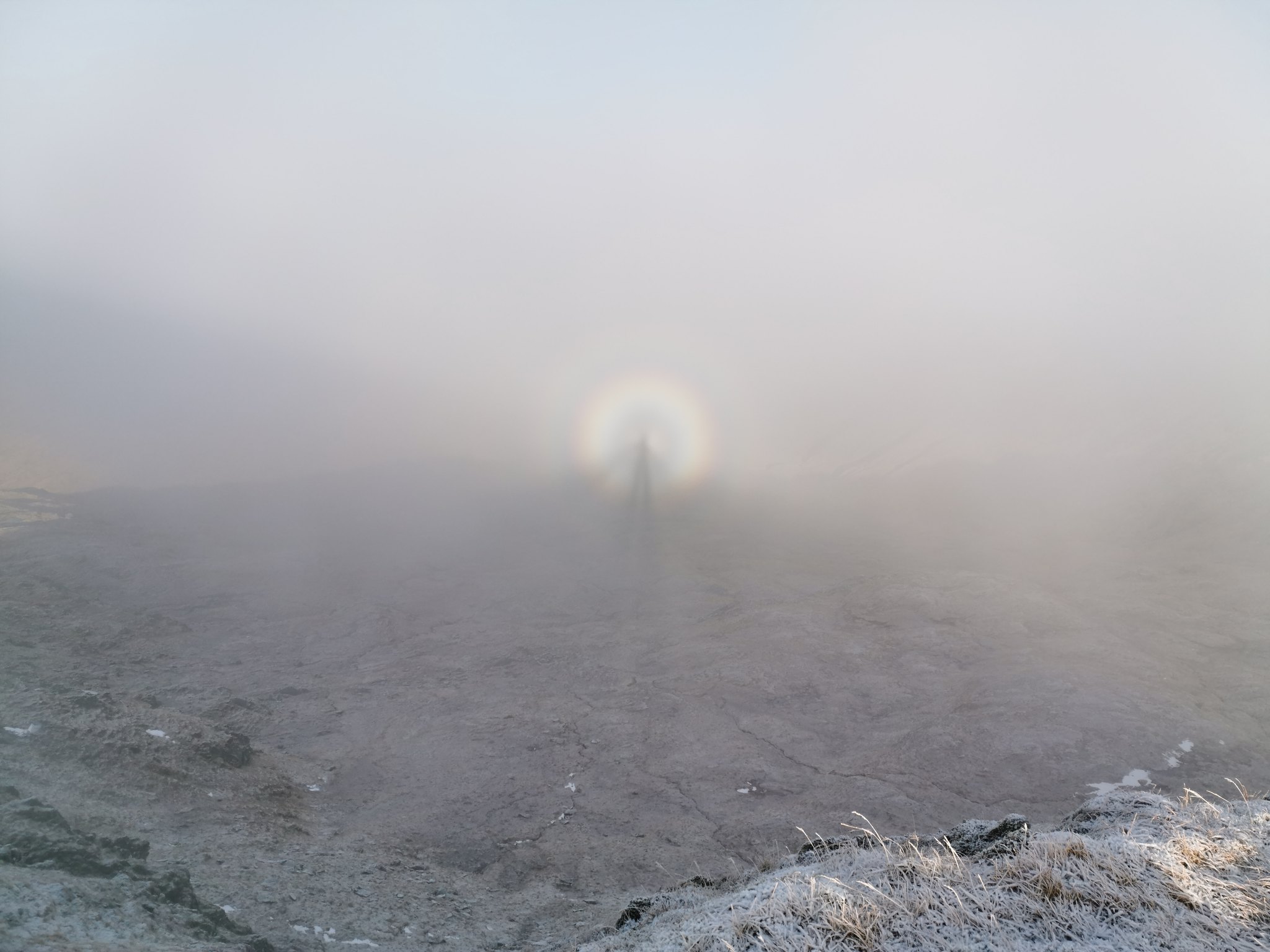 Still being followed down the ridge by my new friend 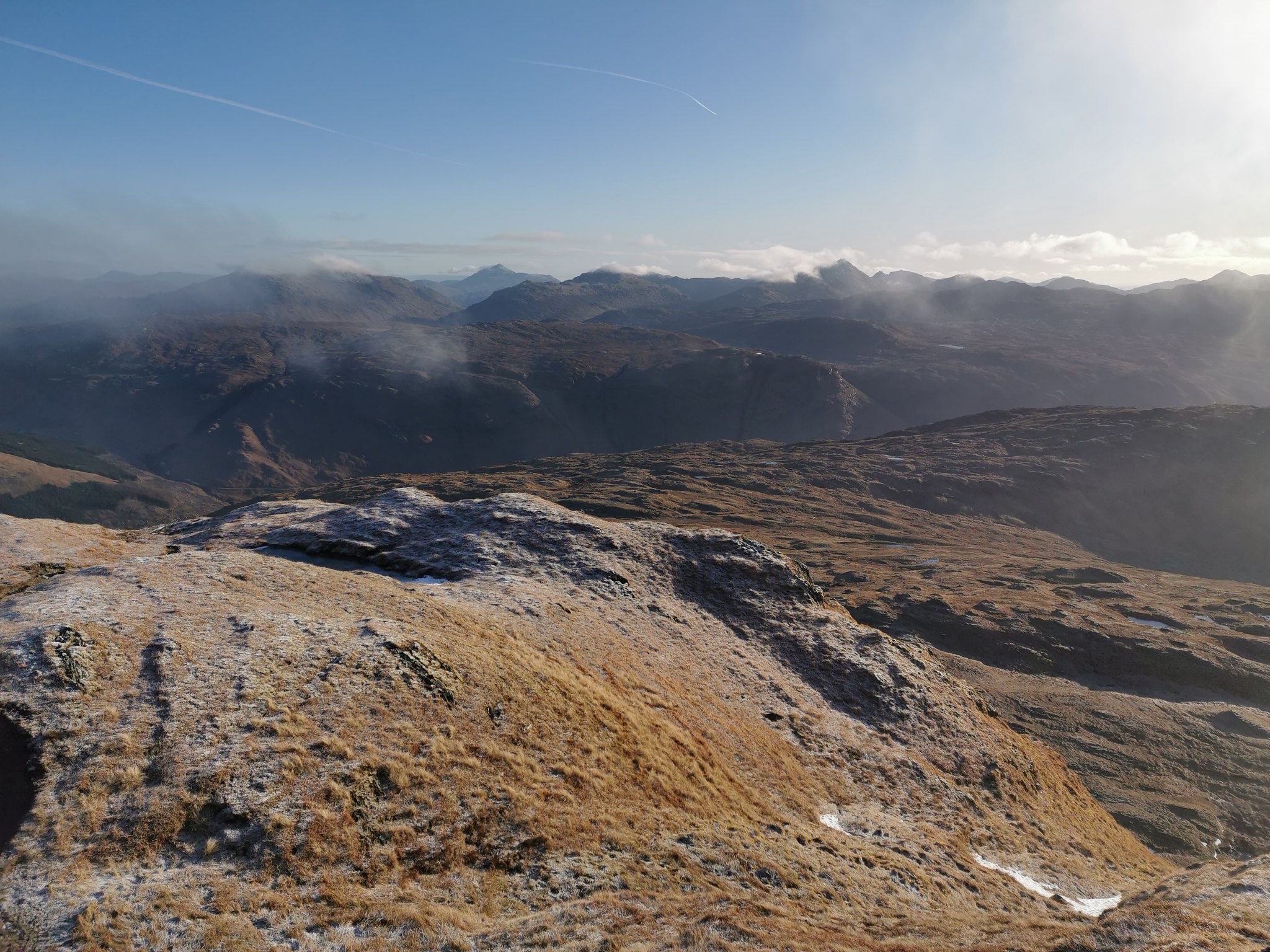 Cloud lifting from the Arrochar Alps and Ben Lomond 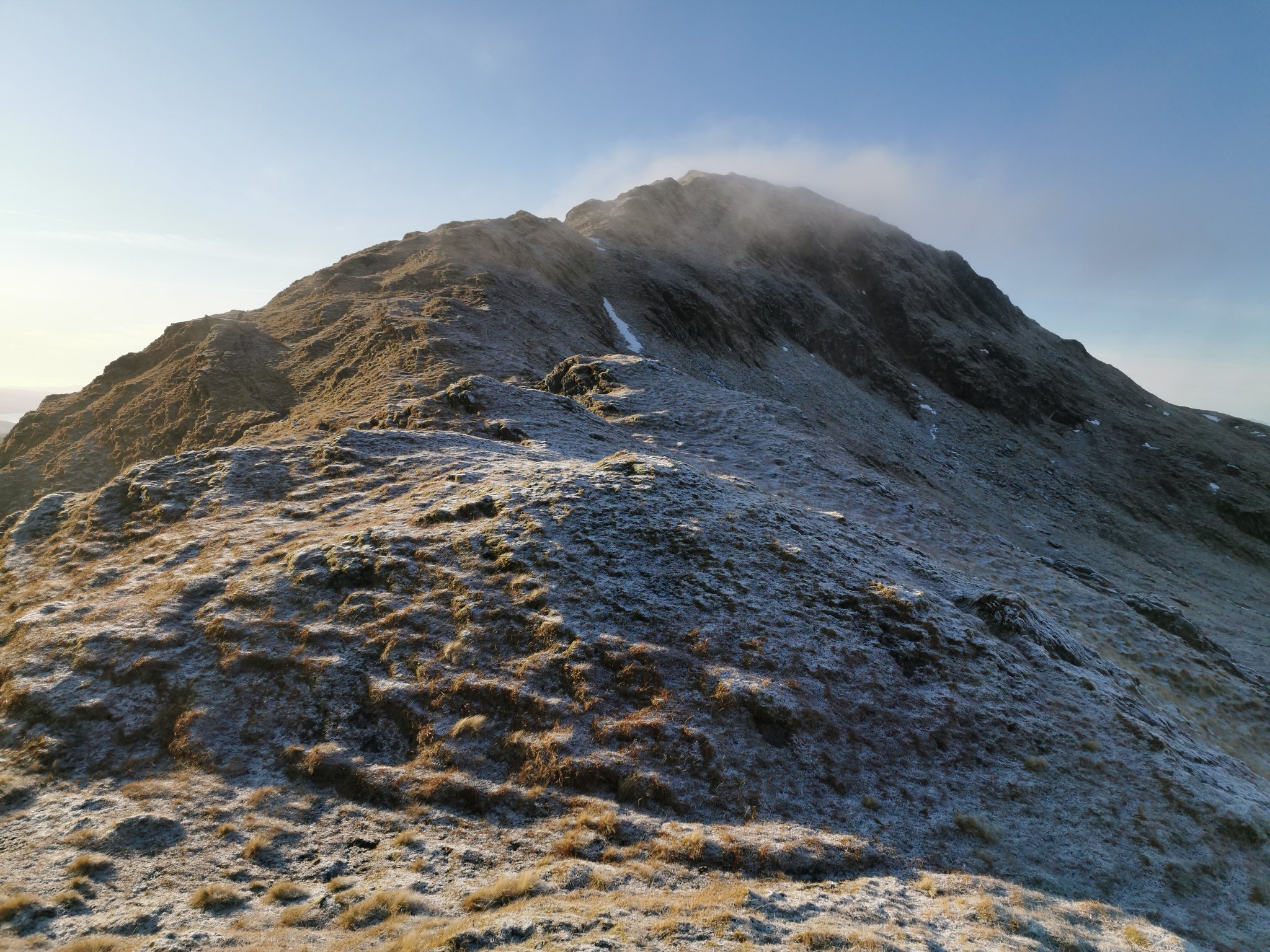 Looking back towards the summit of Beinn Bhuidhe 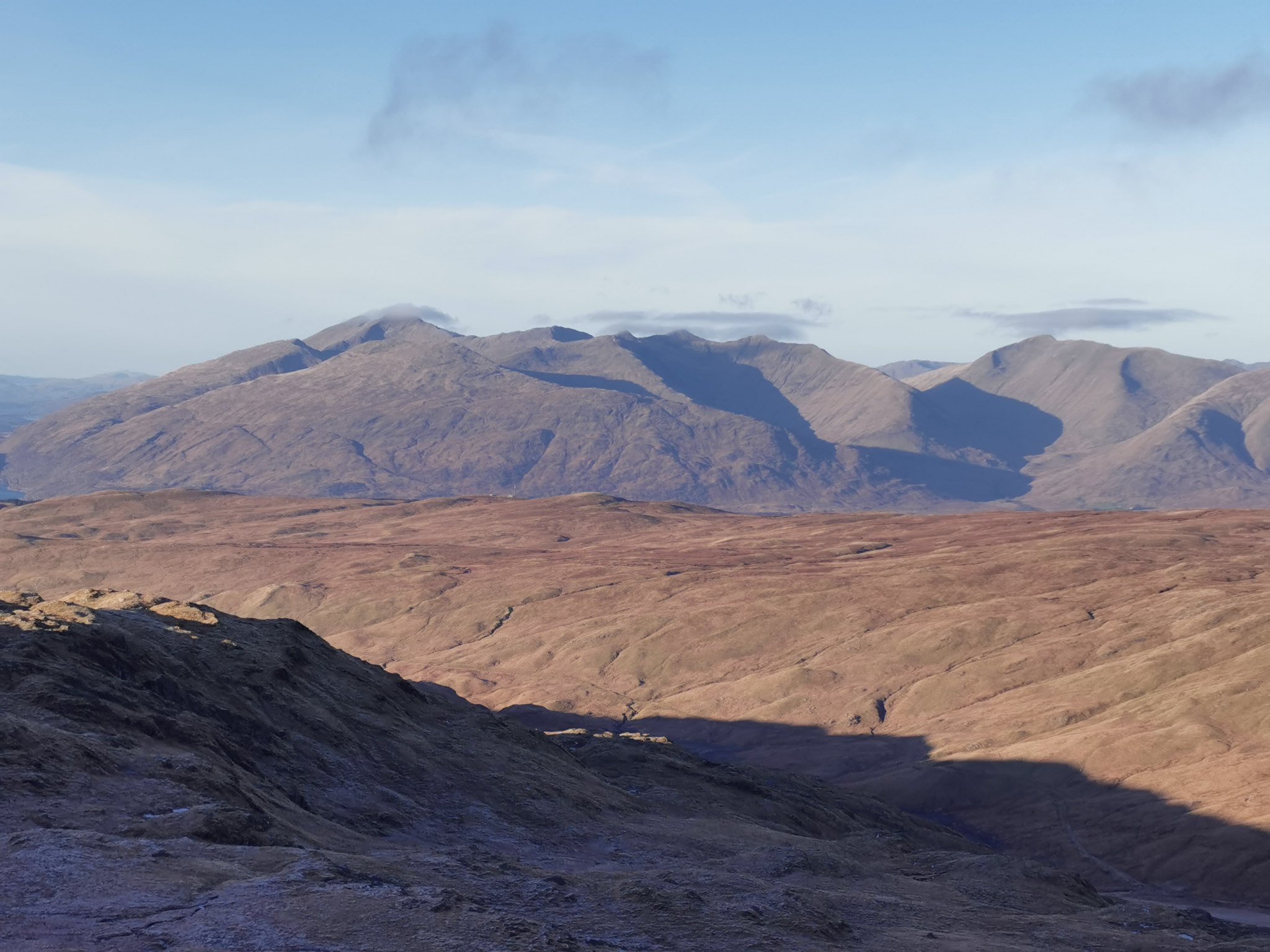 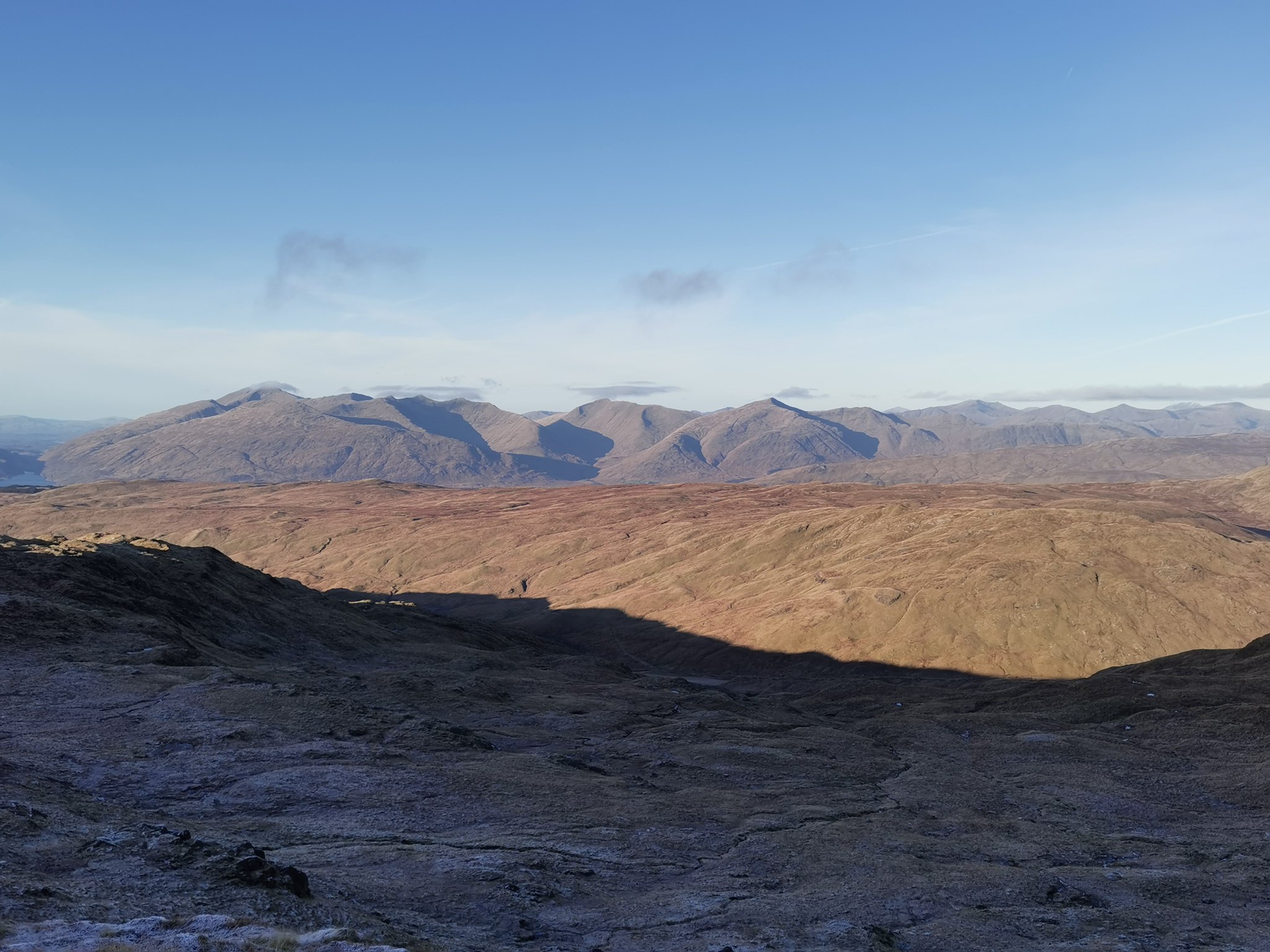 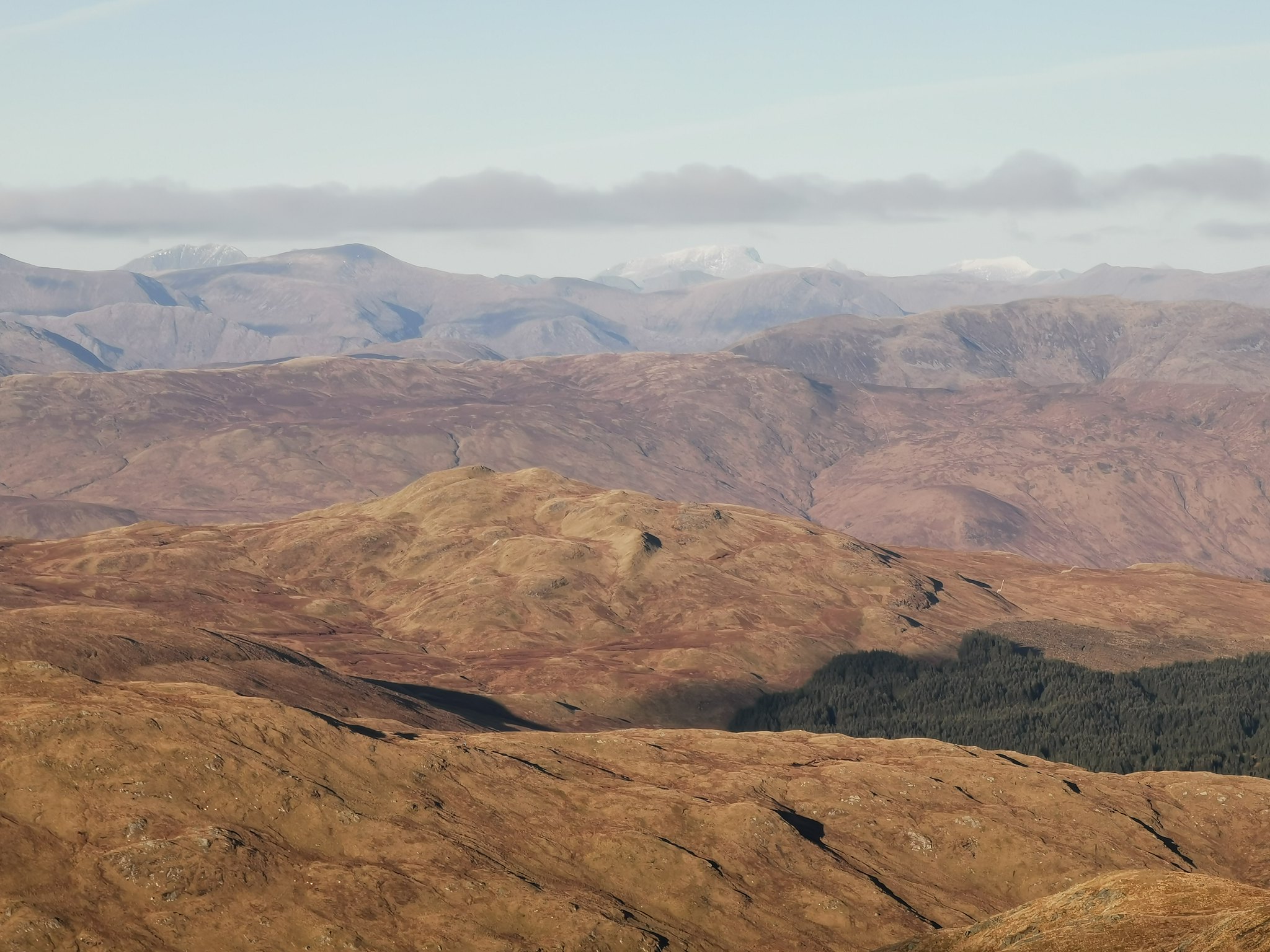 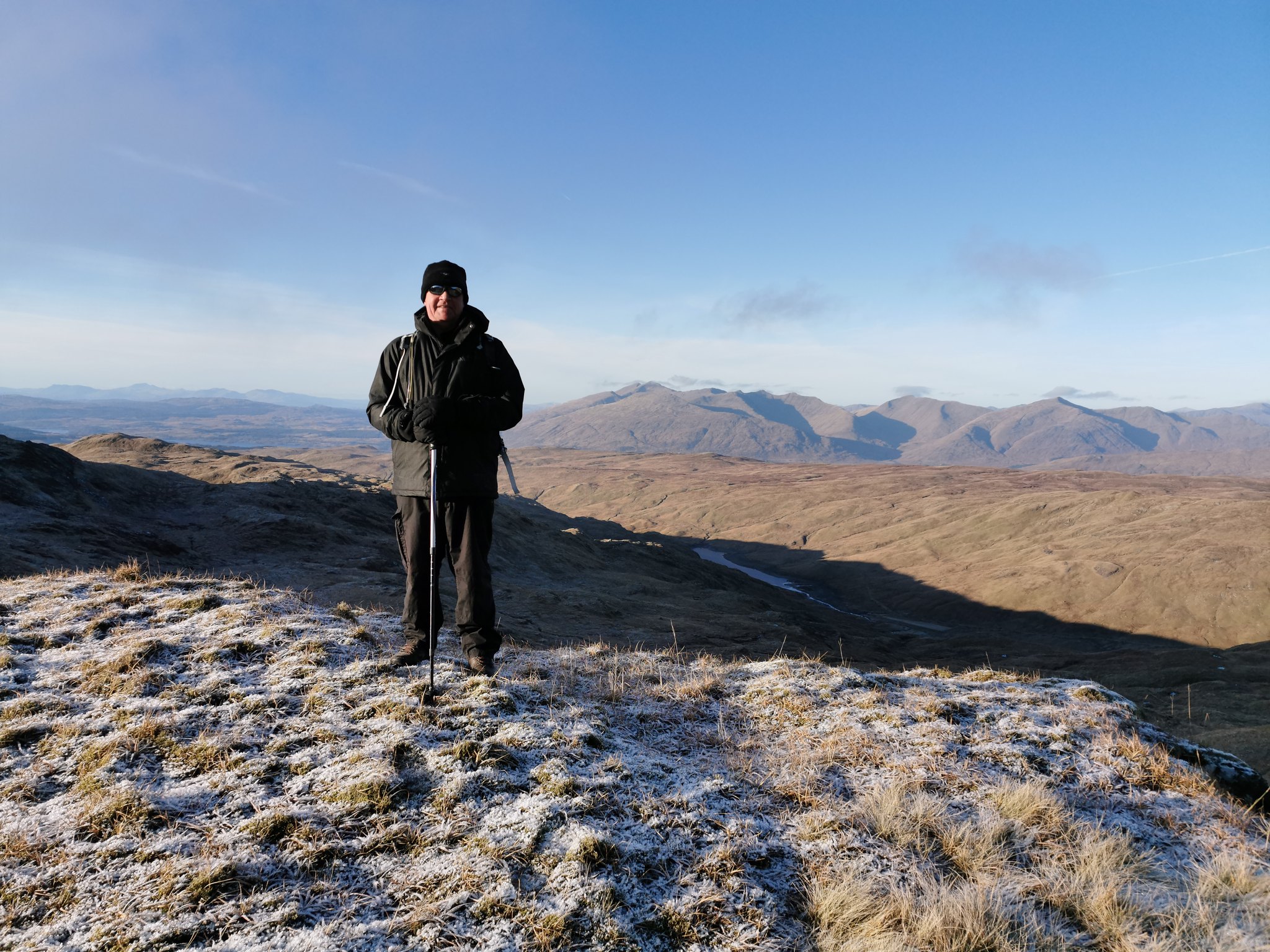 Paul and the Cruachan Range 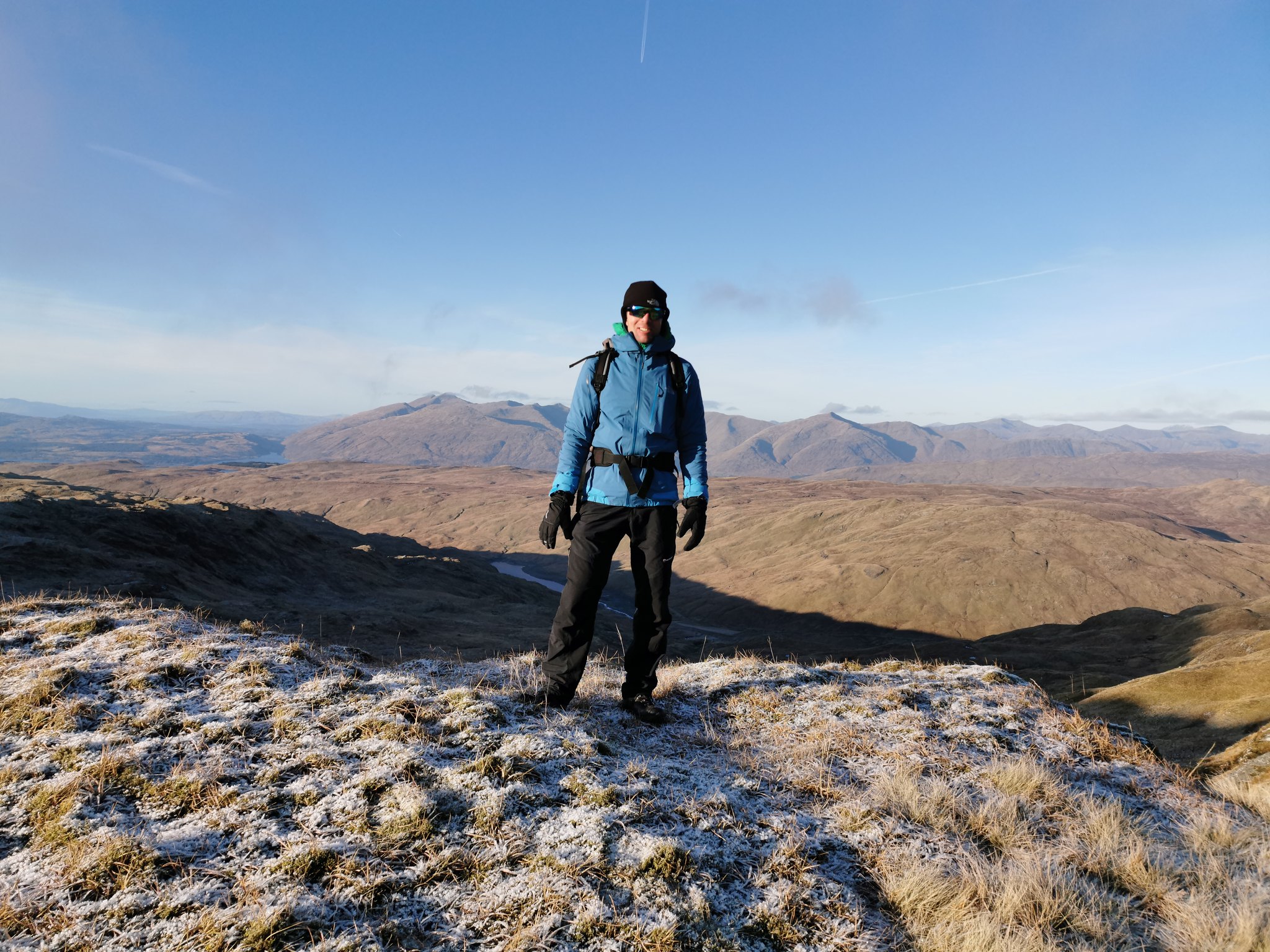 Me at the same spot. 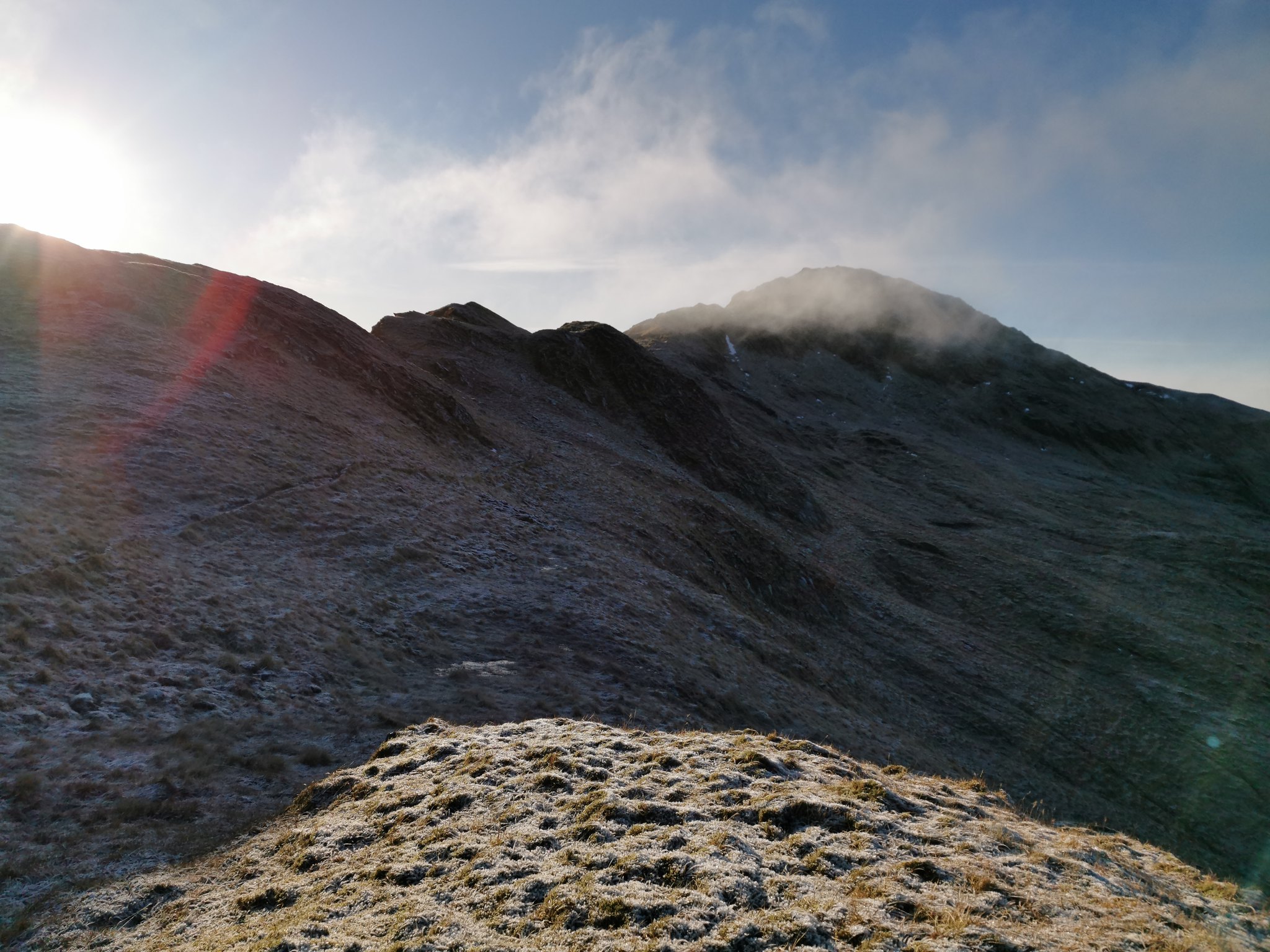 After much faffing and picture taking, we started down the "descent path" on the other side of the gorge. This path is very faint and easy to lose, but it's almost all on steep grass which is much easier on the knees to descent than some of the large steep, rocky steps on the way up. This would have been a nightmare with all the ice as well, so the grass was quite welcome. It is steep, but in no time we were heading back down towards the track at the bottom of Glen Fyne. The sun was loweing in the sky and the light was stunning. 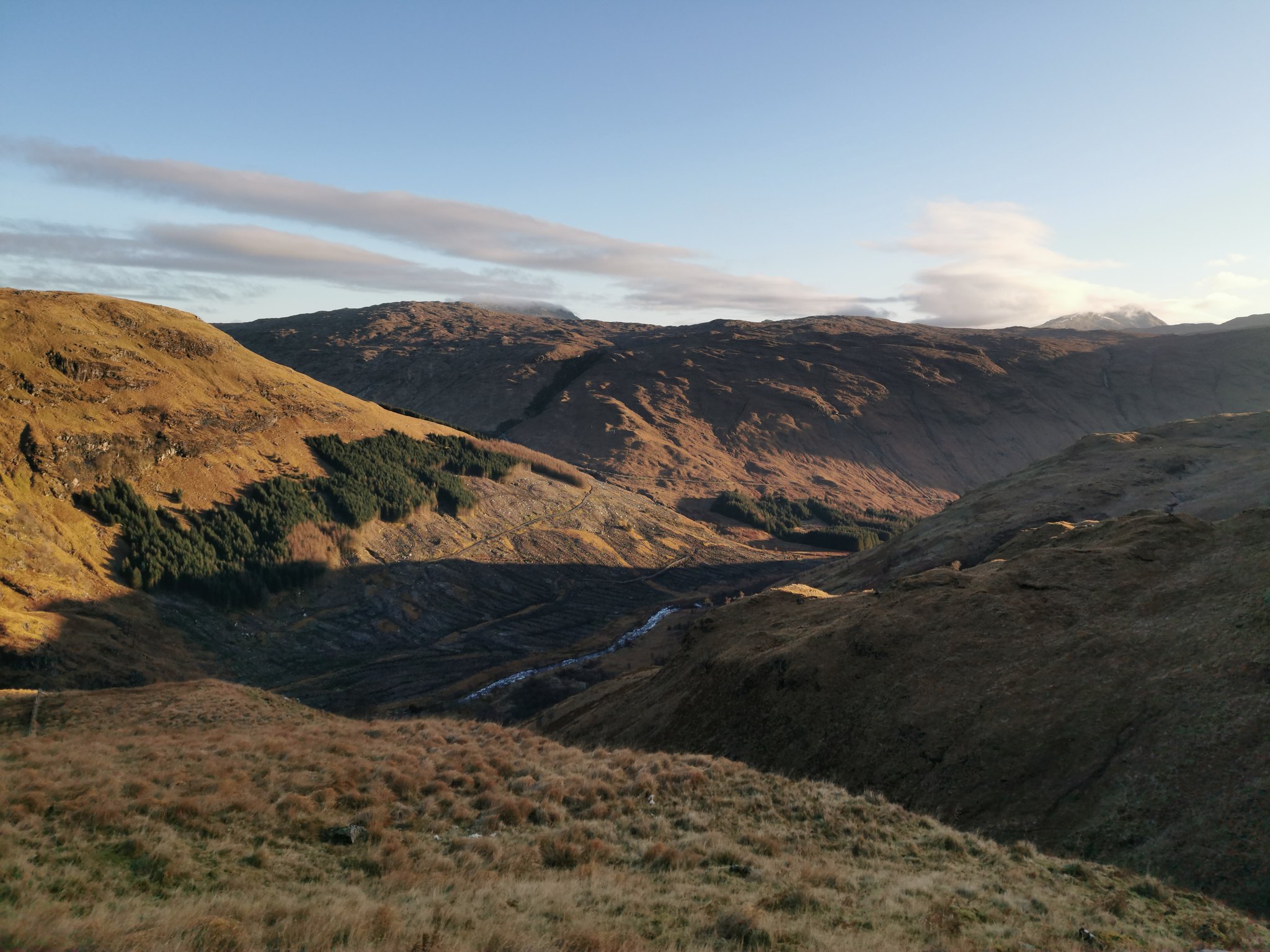 Back down to Glen Fyne 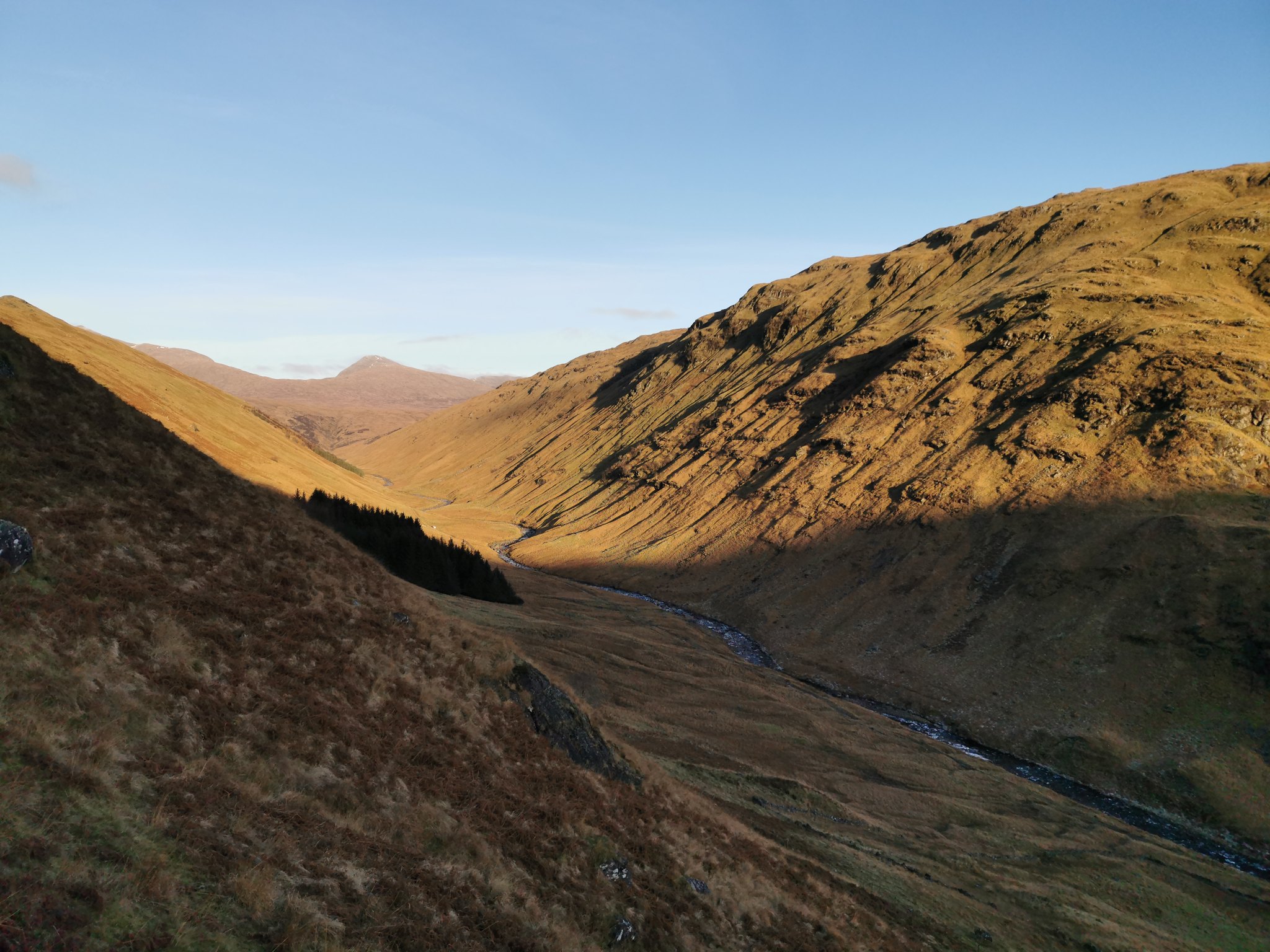 Up the Glen where Ben Oss dominated the view. Ben Lui is at the very left edge in the distance.

Reaching the bikes was a welcome sight, and after a couple of minutes of panic not being able to find the key to my lock... we were off and speeding down the track. It's absolute bliss finishing a walk on the bike, feels like a total holiday! In 21 minutes, we had covered the 4.5 miles back to the car, feeling fresh as a daisy and rather chuffed with ourselves.

All in all, a brilliant day with another bucket list sight ticked off. The hill definitely took us slightly longer than we had thought, so were glad we started early.

Some great frosty shots and a Brocken Spectre too

Took me three attempts to eventually bag that one, but once on the ridge I found it to be a really enjoyable hill. Still have memories of a friend freaking over the Highland cows on my second failed attempt

Nice TR. I was nearby on Beinn's Ime & Narnain, and also encountered my first brocken spectre after many barren years haha

Some great frosty shots and a Brocken Spectre too

Took me three attempts to eventually bag that one, but once on the ridge I found it to be a really enjoyable hill. Still have memories of a friend freaking over the Highland cows on my second failed attempt

Thanks, loved it as well once on the ridge. Bit of a grind until then. Definitely a bit daunting weaving in and out of the horns! Thankfully they don't seem to give a monkeys!

mamoset wrote:Nice TR. I was nearby on Beinn's Ime & Narnain, and also encountered my first brocken spectre after many barren years haha

Thanks 👍. Superb, was looking over at you half the day then. Glad you saw the spectres as well, really made my day!