Time to get out into the great outdoors again, ideally we would have headed anywhere north and tackled one of the big boys, as usual the forecast was absolute pants - rain we don't mind (well we don't like it, but we can model our wet weather gear), but mix that with 30mph winds with stronger gusts, yuk.
So I put my plan to Parminder that we could head down south, where the weather would be better and he agreed to keep me company - George was unavailable so it would be the two of us.
My plan was to pick off a couple of Marilyn's near Dalbeattie which were on my to do list. As usual getting down to the SW, especially the otherside of Dumfries is quite a challenge.
I arranged to meet up with Parminder at Straiton which means battling with the traffic trying to escape out of Fife, then the Edinburgh bypass. The plan was to head all the way down the A701, that plan was scuppered as before Broughton, there was a single sign at the side of the road warning motorists that the road was closed ahead (presumably roadworks), a bit of advanced warning would have helped!!
After just over 2hrs 30mins on the road we arrived at the car park for Screel Hill, we had endured quite a few hefty showers on our way down so I opted for the full waterproofs.

Screel Hill in the distance. we discussed whether we should head up there but decided to stick to our plan

Approaching a junction, we head left

Path reduced in size, but still excellent and going uphill

Looking south and the Solway Firth now in view

Parminder not a happy bunny as one of his poles had collapsed, so he will be writing a letter to Santa when he gets home

Parminder plodding along behind, not sure what he was looking at?

Where the track takes a sharp left turn, we took the narrow path straight ahead

At this point the path continues uphill to Screel, we turned left and waded through boggy ground consisting of heather and tufty grass

Unfortunately we didn't realise there is a path very close to the wall, albeit a bit damp

That is the path, we maybe took the better option

Back on the path

Looking back towards Screel, if you look carefully you can see the cairn

A bit of descending before going up again

Usually a good sign means you are on a path

We opted to take a direct route to the summit, the path veered off to the right and I wasn't sure it was going where we wanted it to

The shelter protecting the trig

There are also 2 cairns, the near one I can understand, the other completely pointless

Arty shot of the explorer known as Parminder

Nice shot taken on the descent of the Solway, we had no views on the summit

Solway again, on a descent day the views from Bengairn would be quite impressive

This was a fairly straightforward walk with a cobbled together route which actually worked a treat. The last 1km is on the smaller, damper path. I did consider following/trying the route that the majority of fellow walkers took, but the option of the car park convinced me to try a different route.

A 12 mile drive with our boots still on to the start point for Bainloch Hill which took about 20 mins, I wasn't exactly sure where we were going to park as there are hardly any walk reports to assist. So we decided to kind of wing it and park as close to my plotted start point, which as it turned out was at the beginning of the track.

My parking spot, plenty of room for even the largest of vehicles, was a tad muddy

The gate mentioned above, close it or else!!

The track barely rises and makes for rapid progress, that would change in a few minutes

My plotted route was intending to avoid the forest and keep on the northern edge of it. Following the track was taking us well away from my intended route. The track is not shown on the GPS system so I had no idea where it was going and wasn't prepared to take a risk. So we left the track and entered the forest through a fire break that would take us north

Our way ahead, it is quite fun navigating in forests

Parminder picking his way round the old wall

I would guess the wall was there before the trees? 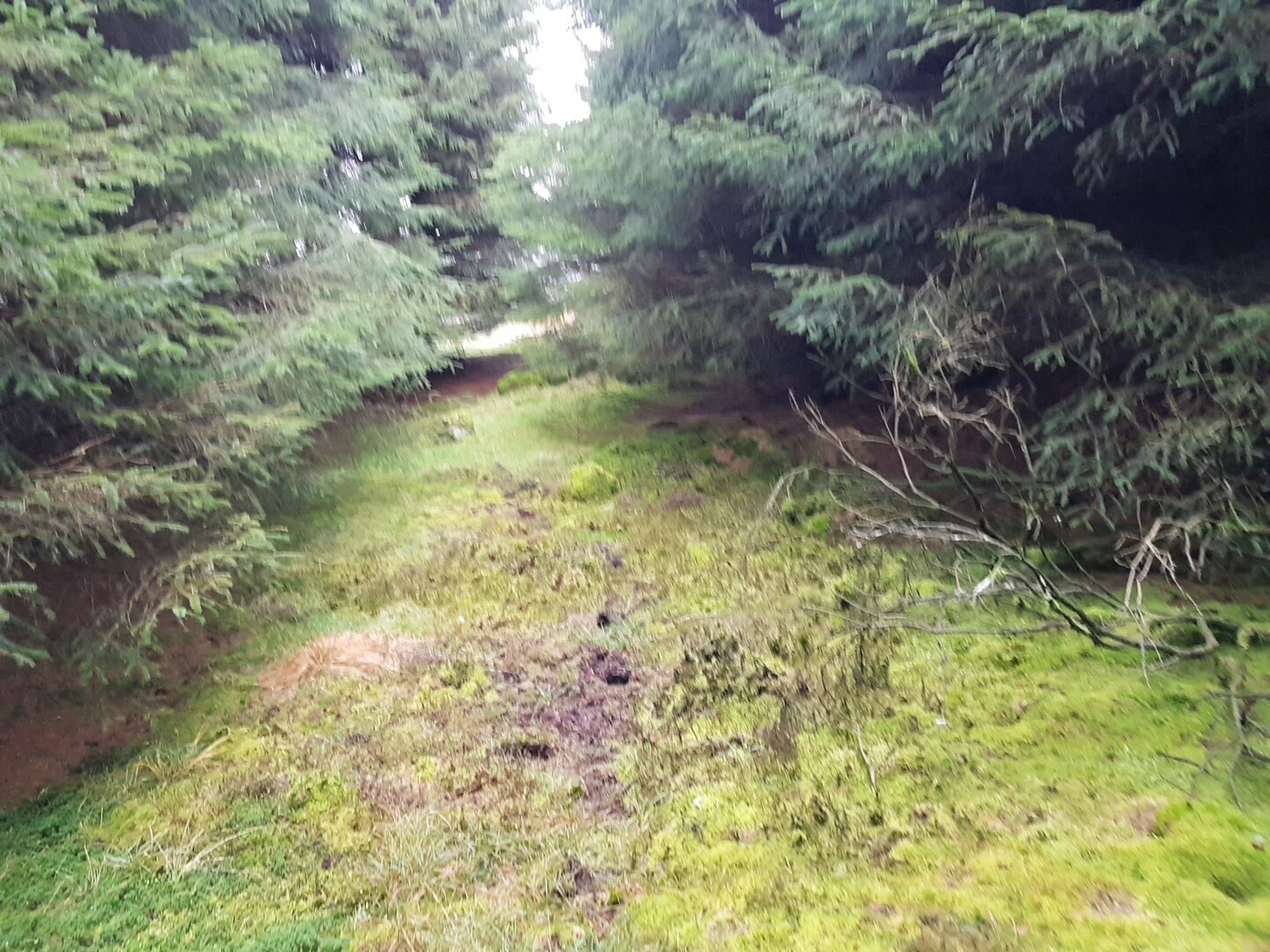 Not far now, we will then be back on track 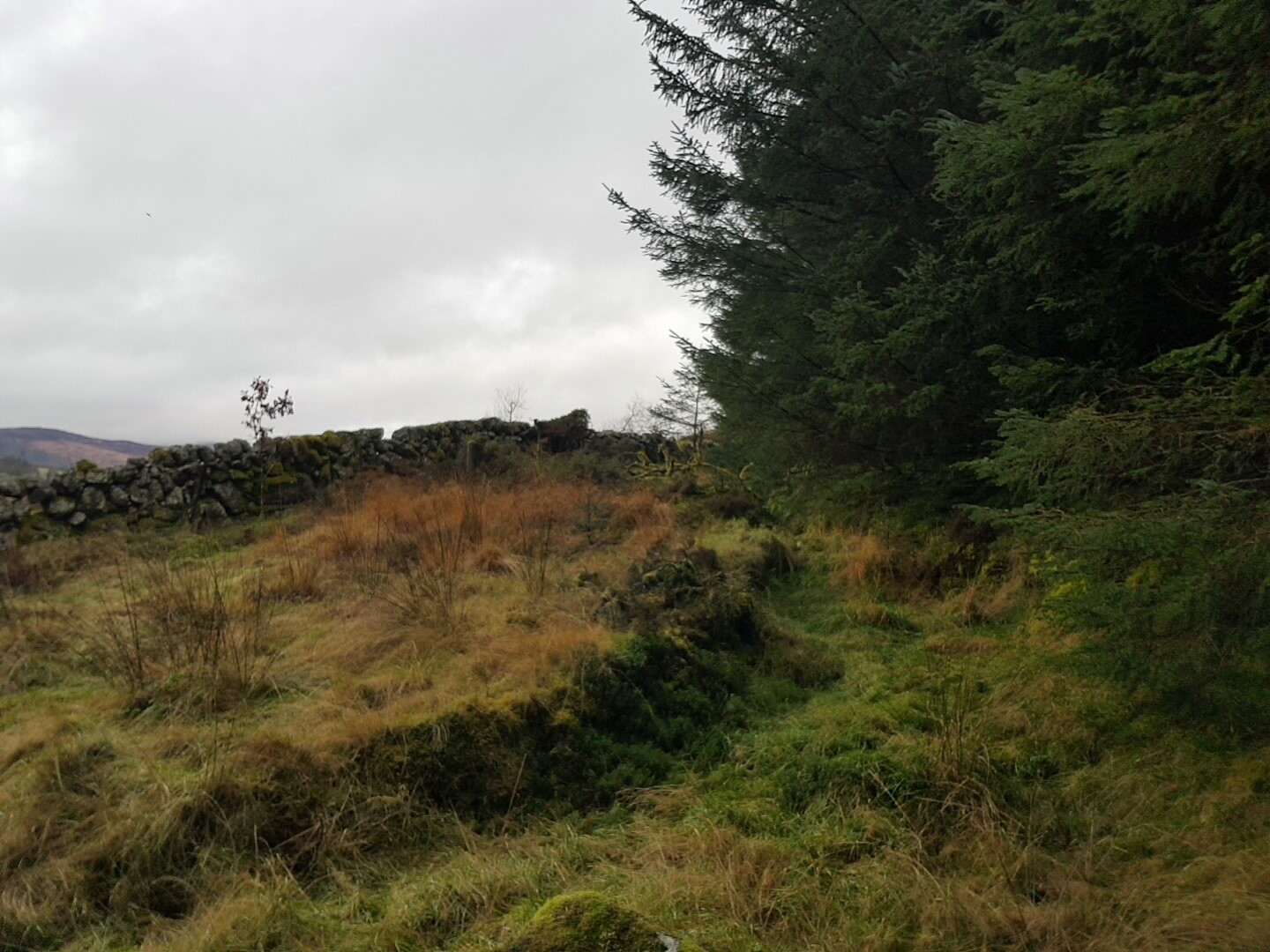 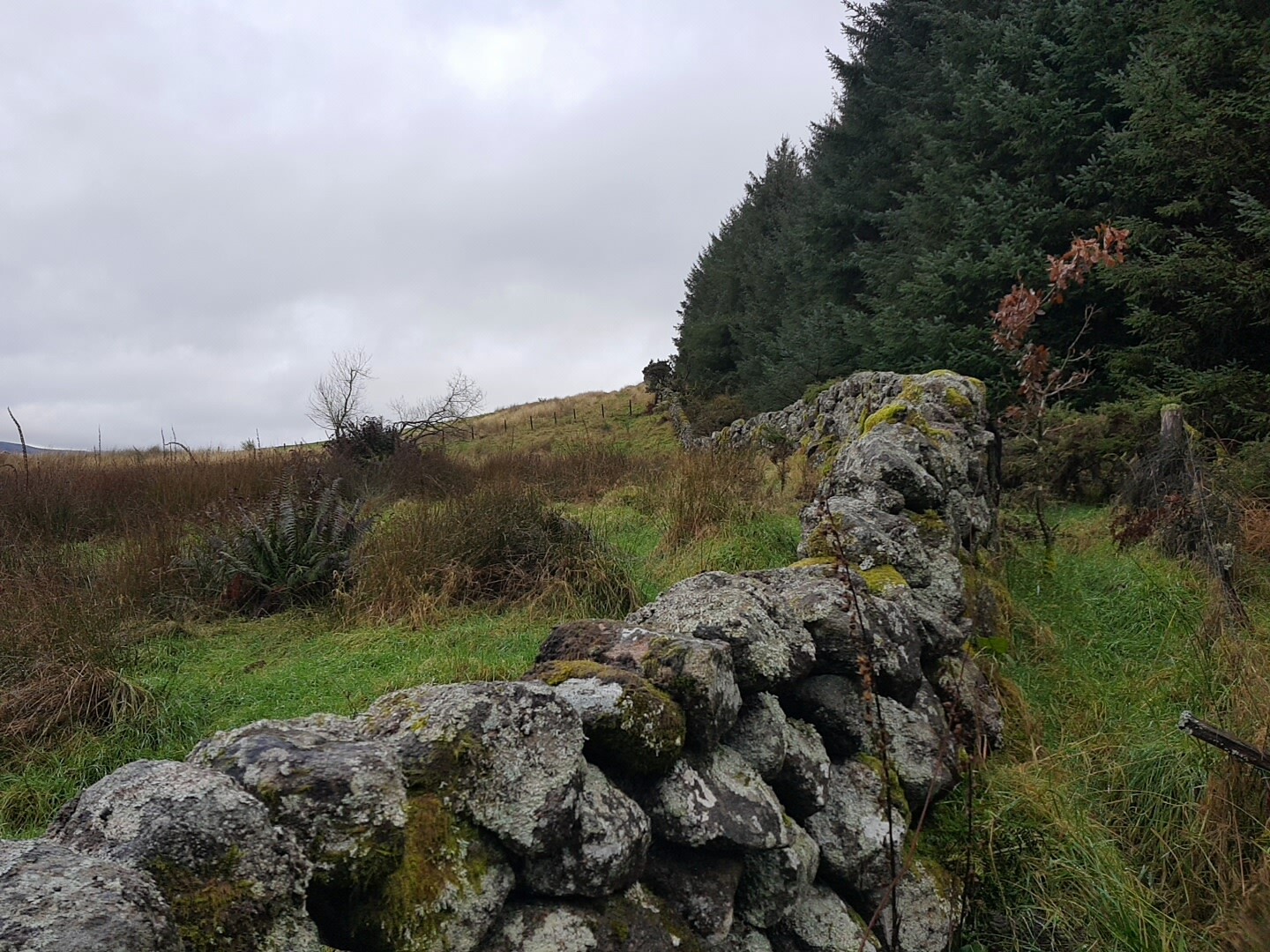 We had to climb over the wall and a wire fence 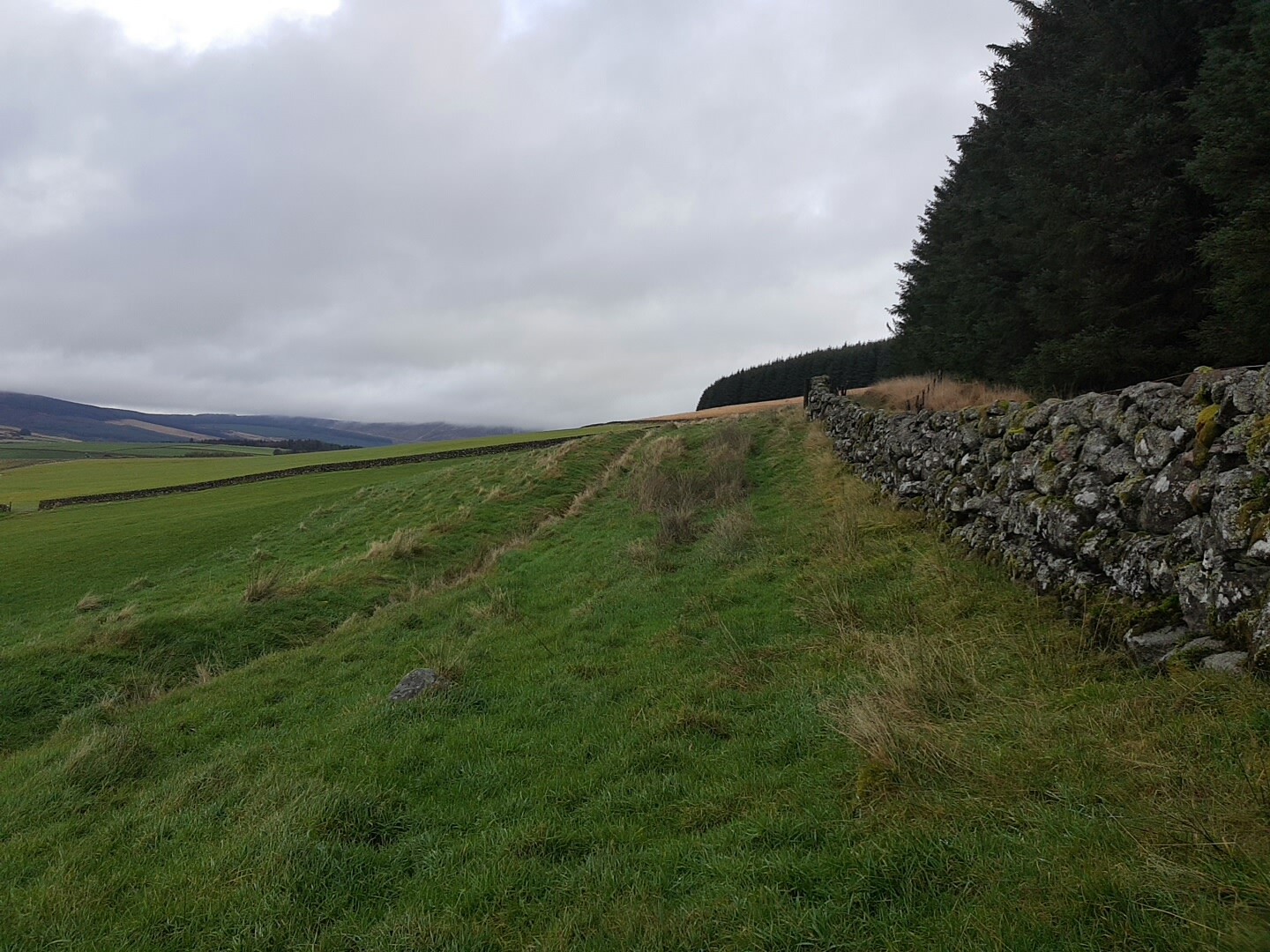 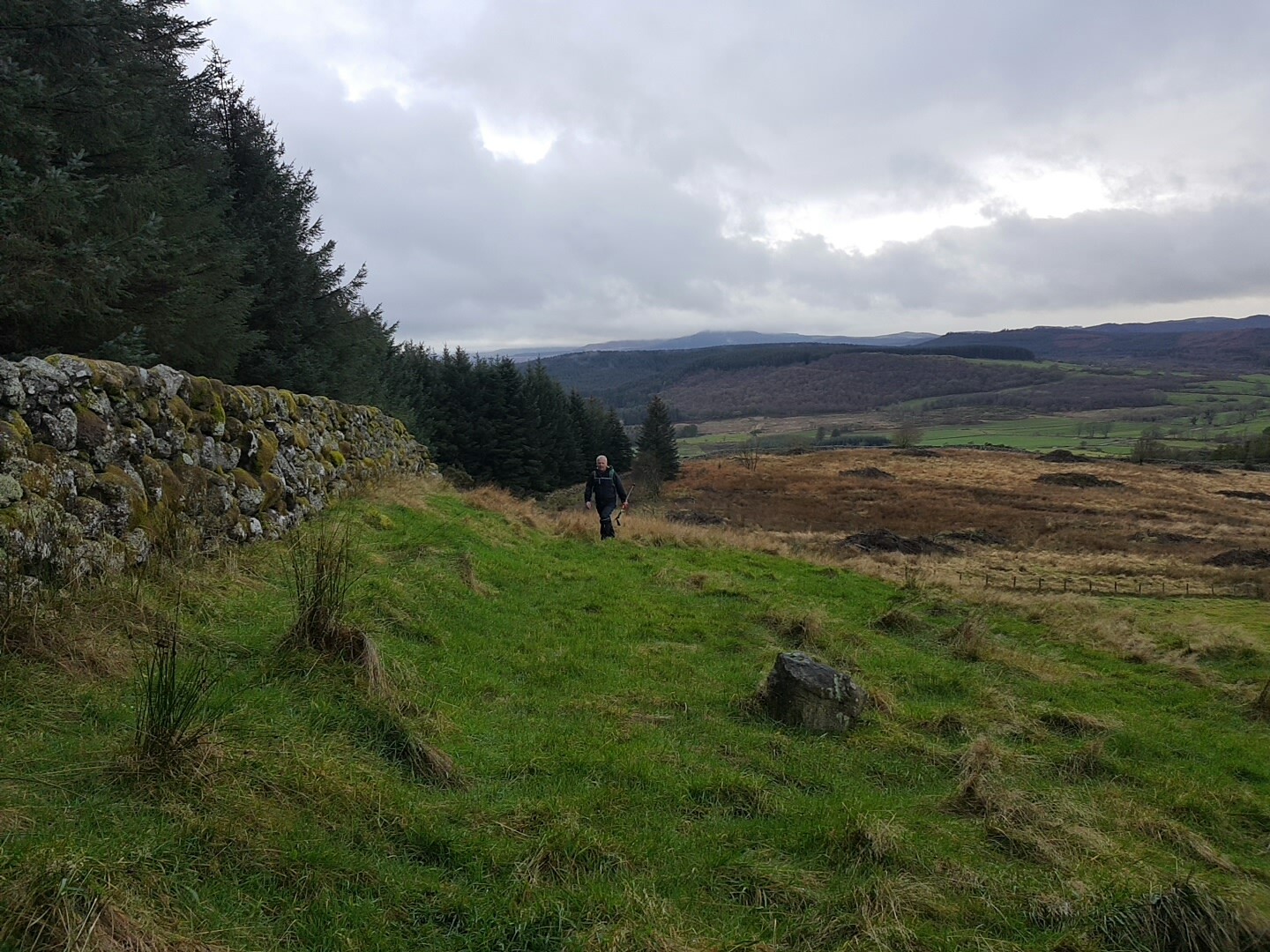 I was being followed

The route takes a 90deg turn to the right, then to the left (up ahead)

We are back in the forest again, heading uphill

Yes we are going up there

If you zoom in you can see the Shetland ponies

Someone else had been this way as I came across this!!

And then look what came across!!!! Looking on the bright side the descent was an absolute doddle

Nearly out of the forest again

No paths here, knee deep uphill heather, great for descending but we were going up

Kind of shows the angle of going upness, by far and away the toughest part of the walk 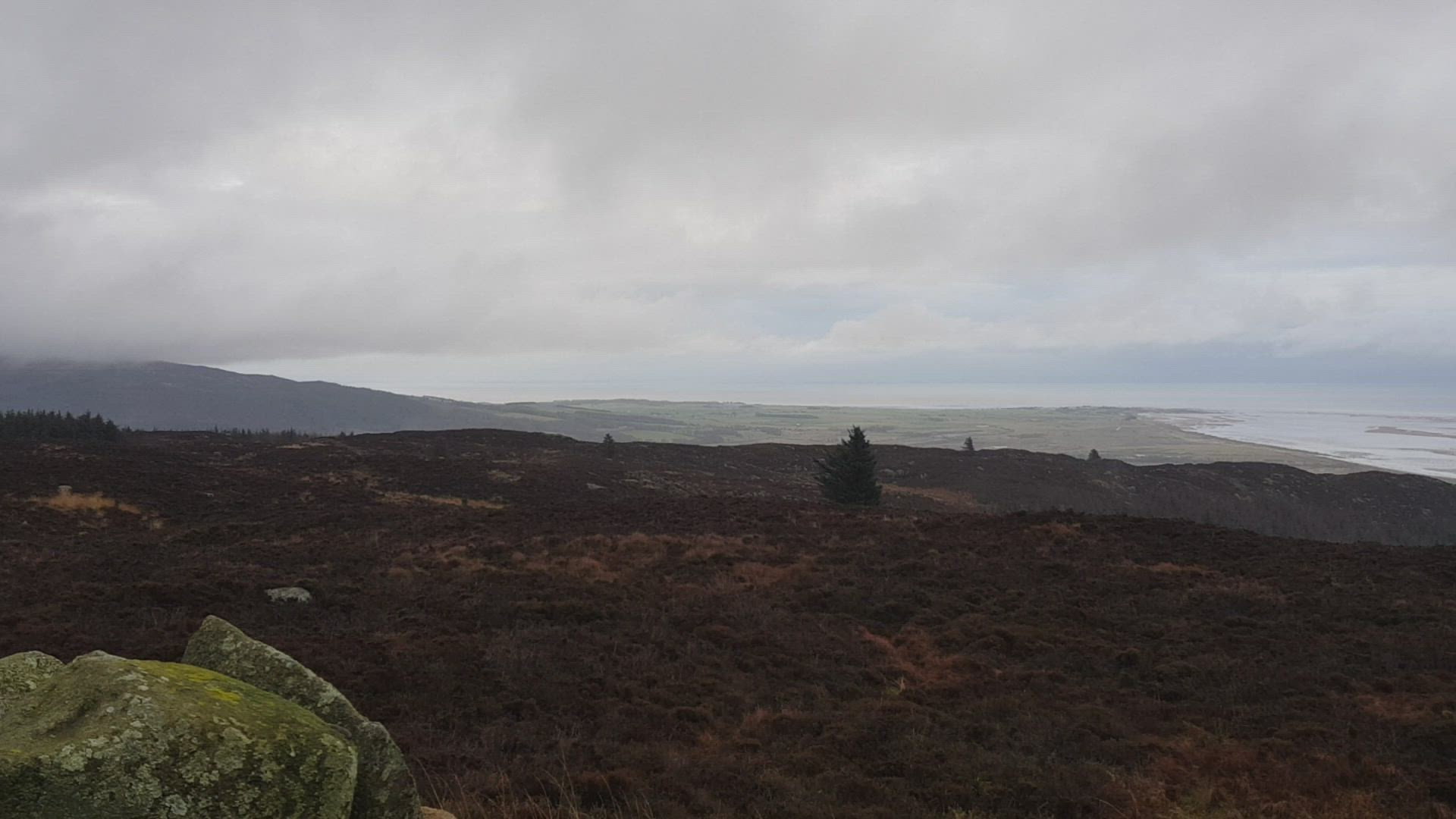 Video taken on the summit of Bainloch Hill

Arty shot of my one poled companion

The only wildlife we saw, Stuart the slug who was patrolling the cairn

Here we are descending now, we built a small cairn to indicate where to turn right and head up through the forest to the summit

This turned out to be a fun day, thanks as usual to Parminder for his company. Bainloch Hill would be very easy if you follow the forest track all the way round and would take less than an hour. Having said that our route was fun and interesting, you decide?

Great effort on Bainloch Hill too, that was looks much more arduous than when I went up! Can't wait to see your reports for the 4 you've got left just W of Dumfries!

After some previous bad experiences with fire breaks that look good and turn out to be anything but it will be the track and your little cairn for me if I ever do this hill.

Enjoyed reading that as its my favourite corner of Galloway, thanks.

Hoping to get some views on these two on Saturday Martin 😁

MB, great photo's and script,Thanks for organizing a braw day out,,