Shortly before the end of a 300 mile overnight drive i paused on Rannoch Moor and took the first 3 photo’s below, then carried on to Fort William. Next i caught the 7:40 am south bound train which arrived on time at Corrour at 8:30 am. The train back to Fort William was at 3:20 pm which gave me just under 7 hours to hike over Leum Uilleim, plenty of time. I first headed west to gain the ridge of An Diollaid, then south west to the summit of Beinn a’Bhric, a good viewpoint for a rest and something to eat. The cloud had lifted above most summits, the sun was shining and in another 20 minutes i was on the summit of Leum Uilleim, an excellent viewpoint with a shapely summit cairn. 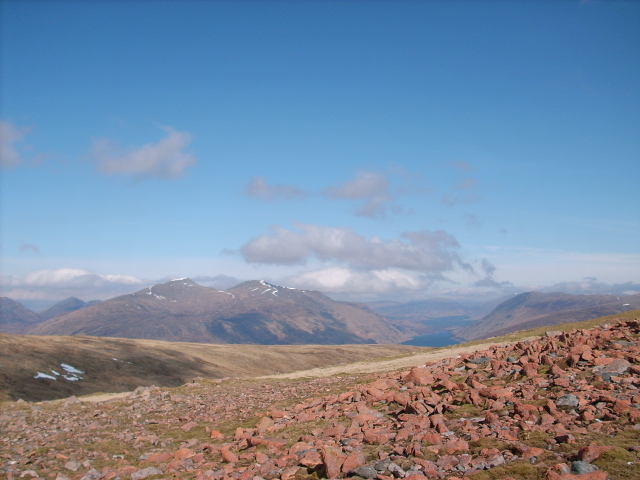 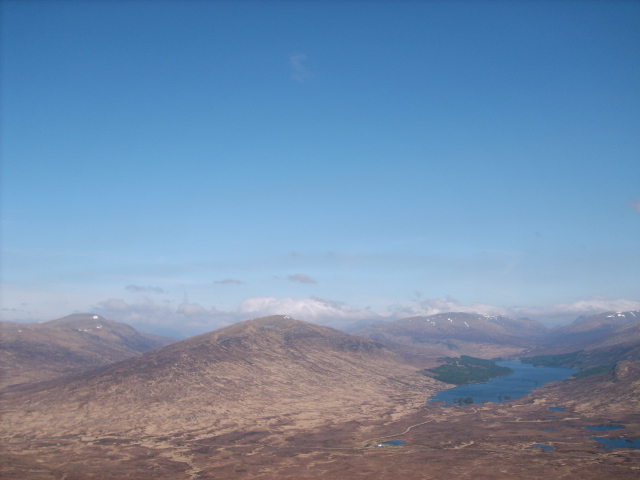 There was no need to hurry and i spent nearly 2 hours on the summit lazing around, after which an hour’s stroll put me back at the station about 3:00 pm. The train was bang on time and i arrived back in Fort William at 4:10 pm. Later that evening i decided to grab a couple of hours sleep in the car at the end of the Glen Nevis road, before driving northwest for an early start the next day. As i rounded a bend near Achriabhach i was amazed to see the hillside ablaze. I took a few photo’s from the bridge at Achriabhach then drove a bit closer

to get some more, but it was getting dark and the smoke was getting a bit thick, so i turned around and went looking for a more peaceful place to park up. I've read your 2 reports in the wrong order; so that's a 300 mile overnight drive followed by 9km and 600m, then a couple of hours sleep before your drive north. How much sleep did you then get before the marathon on the 18th and what did you do next?!

yokehead wrote:How much sleep did you then get before the marathon on the 18th

.
.
On Sunday i nipped up the Graham Glas Bheinn near the east end of Loch Arkaig, before a 300 mile drive home that night.

lol... thats dedication... I always feel so priveleged to have such easy access to the hills when Im on them, but more so especially when reading reports like these... great pics again...

The dawn photos are super. I love the drop off at Corrour, you really feel then that you're quite isolated and it's just you and the hills.

Great report and photos... I had my eye on those mountains when I dropped off the train to do Beinn na Lap but didn't really know what they were or that they were Corbetts. Must have a go... And you really are dedicated to set yourself such a schedule. I'm pretty lazy when it comes to my bed (or getting out of it at least) and struggle to catch the early train when I'm staying at Fort William.

The dawn pics are stunning.

Deer stalking, salmon fishing and grouse shooting - it was the only way to make any dosh out of a cripplingly-taxed highland estate in Victorian times. Still is, in a lot of places in the highlands.

Ah - they didn't put it there for the teashop then?

Is the station at Corrour normally quite busy, I was told a lot of film buffs like to act out the scene from Trainspotting there, as this was the station used in the film and they started on a walk up Leum Uilleum.

Aparently the station has had a huge facelift and they built a restaurant there too. Probably cost a fortune and be Trainspotting themed, Begbie Cakes and Baked Spud`s

It has been pretty quiet the three times I've been there. There is a station house which has a bar and serves food (although the lady who runs the place was very reluctant to give me a meal when I was last there - quite why I don't know). She can also give you a room for the night. Didn't see any film buffs, just walkers and estate workers.

also I should say all three times I was there were this year so I can't imagine it has changed since then.

benno wrote:also I should say all three times I was there were this year so I can't imagine it has changed since then.

I was there about 2 months ago and her lease was up at the end of November and she was moving on. No one seemed to know what the estate had planned for it next. Call me soft but it was a great way to spend time in the "wilderness" with showers, bed, heating, breakfast and dinner

. No youth hostel for me