It was the only reasonable forecast for the entire period (two weeks) the BBC weather app shows; the only choice was where to go. My options are limited; damn my eyes (yes, again). Google map said 1h:37m driving time to Amulree, and because it usually overestimates, the plan was a 7:30am departure, ~1h:30m drive time, even including heavy-ish traffic through Glasgow, for a ~9:00am walk start. What I hadn’t planned on was that heavy-ish traffic continuing, on and off, all the way past Cumbernauld.

9:00 had come and gone, as had 9:30. I didn’t set off walking until 9:45, and was very concerned about getting back to the car by 2pm. Although the Rodmiester had done these hills in a ridiculous time of just over 2hrs, I was planning on closer to 4; if it did take me that long, it didn’t leave much wiggle room. I needed to hoof it. So it was quick on with the boots, followed by a quick-march up the road, and a quick-march up the track. As per usual, the quick-march theme quickly disappeared once I’d left the track and begun the pathless trudge up the hill toward Creag-Ghorm. 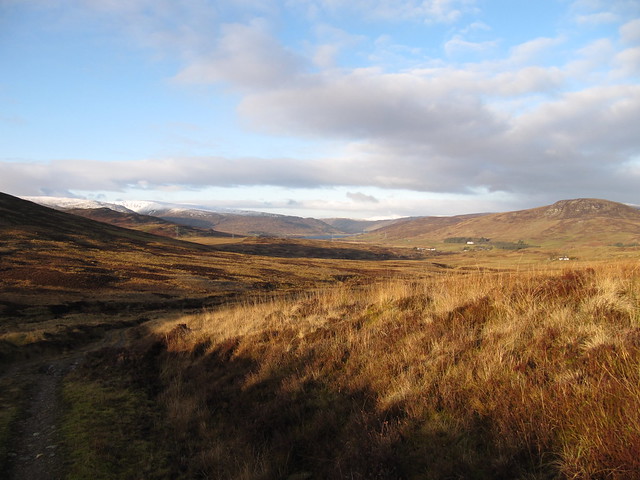 looking back down the way I'd come 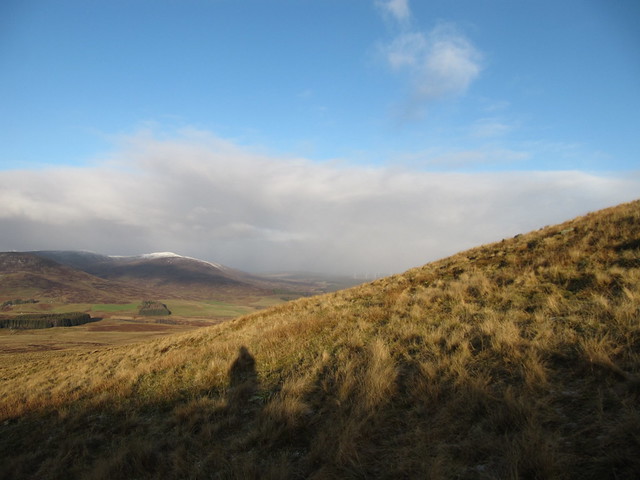 not much liking the looks of what's coming in behind me; luckily, it came to nowt 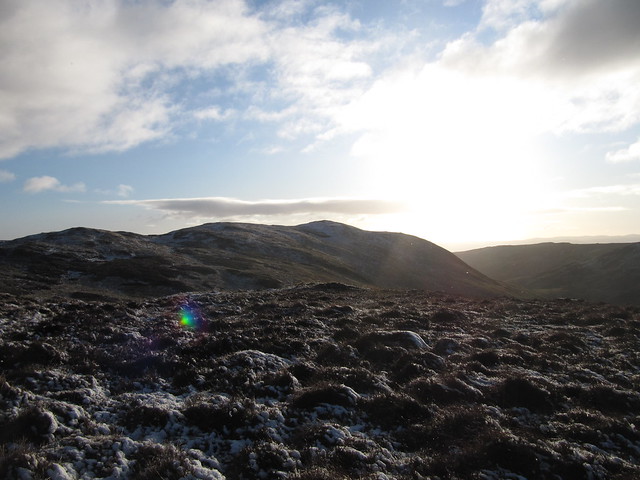 I was hugely relieved to reach the summit of Meall nan Caorach by 11:15; my estimate /plan had been for no later than 11:30. 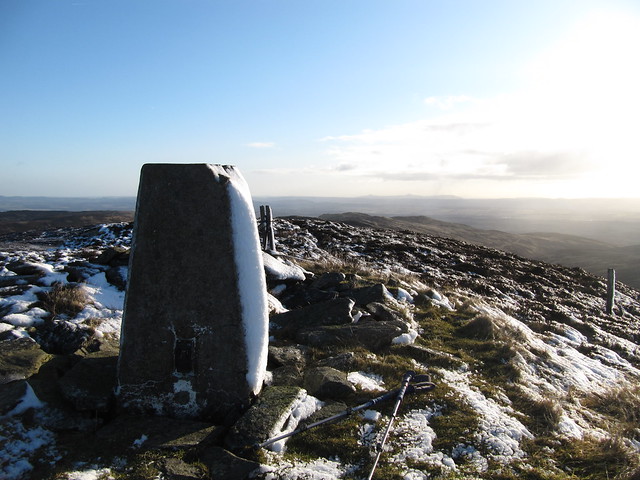 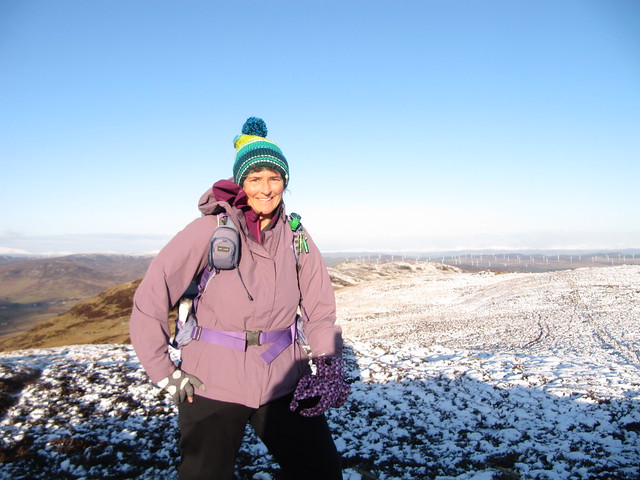 summit selfie; massive windfarm behind me (the first time I drove the tourist route to Pitlochry, the huge turbines dwarfing the trees horrified me! )

I didn’t know how long it’d take to reach Meall Reamhar, which required a steep descent back down to the track, and a just-as-steep (if not steeper) ascent back up. It all looked a bit intimidating; however, the good news was that it was only slightly more than 150m down and back up—and it took me fewer than 45 minutes, again, to my great relief. 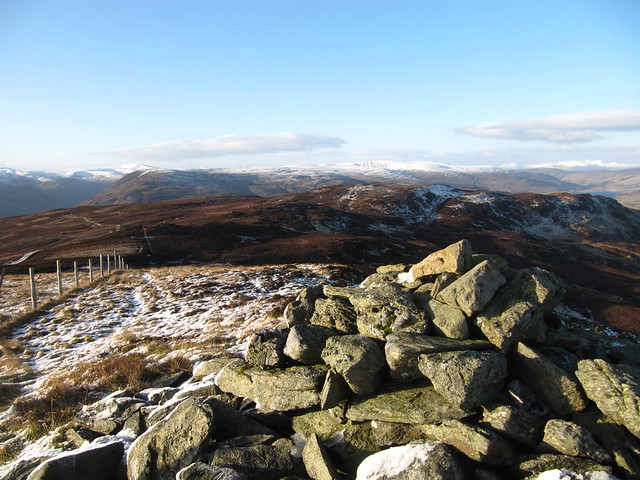 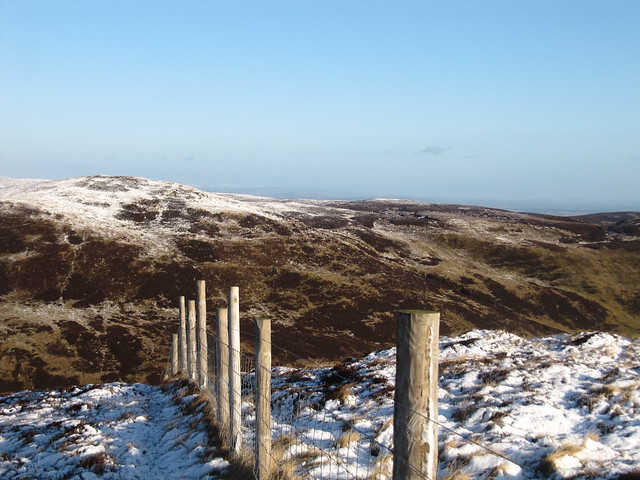 looking back toward Meall nan Caorach 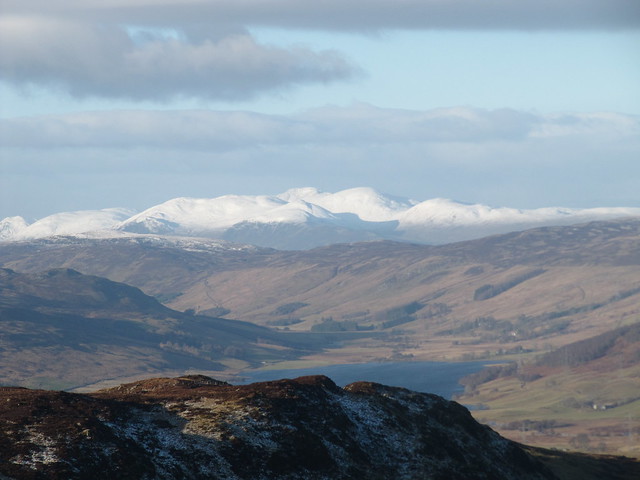 I could relax now, and enjoy the walk back to the car. And I did. I stopped for a snack once I’d returned to the track, the sun making a break inviting, but the wind was bitterly cold, so I was soon on my way again. I returned to the car just a few minutes after 1pm; plenty of time to spare! I guess I hadn’t really paid that much attention to the total amount of ascent being not much more than 500m. 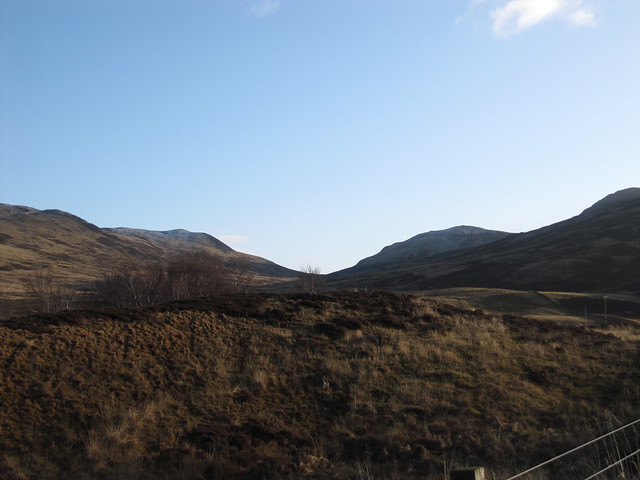 a last look back up "my" two hills

This outing actually included more drive time than walk time, which seems a bit silly. But I knew I didn’t have enough daylight to race up and down either of the other Grahams in the area (Beinn nan Gainimh or Meall Dearg), and the temptation of ticking off two Grahams spurred me on.