The MWIS site predicted a low level cloud base and possible inversion
allowing the higher Munros to show through.
I should be so lucky

But...it was all the encouragement I needed as I couldn’t resist the opportunity for some photos.

Decided on Ben Lui at 1130 metres as a good candidate along with it’s neighbour
Beinn a’Chleibh at 916 metres to complete the walk.

Kitted up and left the car about 8.30am.
I’d been a little concerned that the River Lochay would be difficult to cross
so brought a pair of canvas shoes in case I needed to change and take the plunge

No need for them as it turned out, it was an easy walk across
although I couldn’t avoid some deeper parts (about 1 foot) so
hotfooted it and stayed dry thanks to boots and gaiters 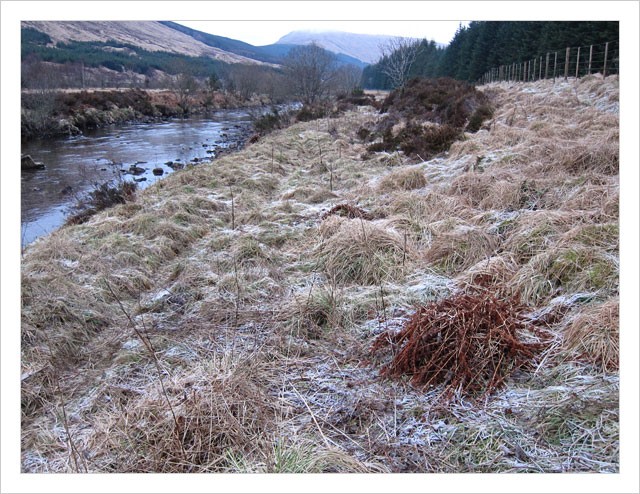 Shoes were stashed, no point in carrying them all day 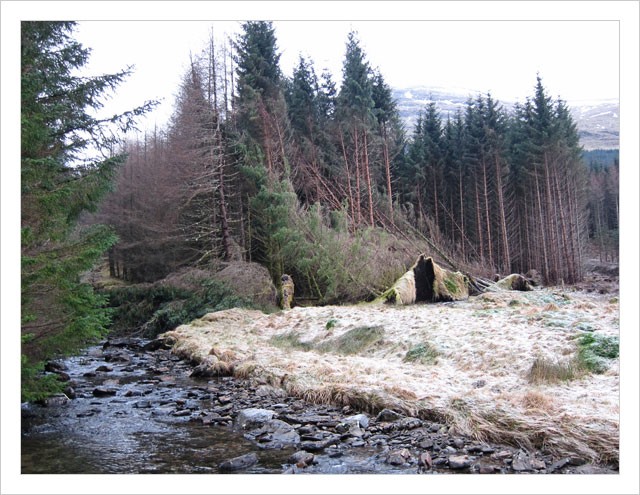 Is that someone spooky with a big cape on? 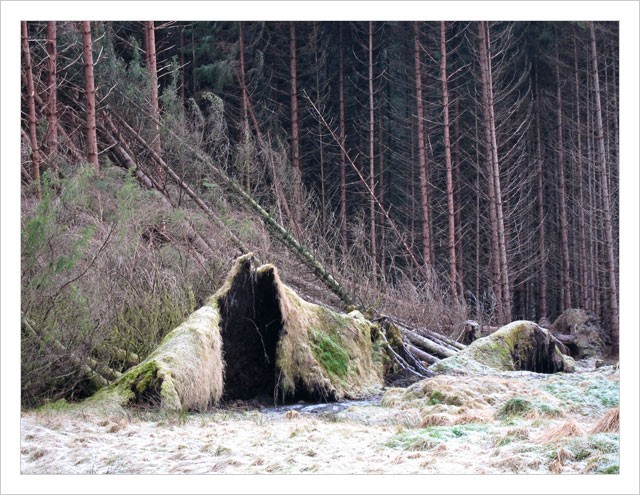 Up through here, darker than it looks here 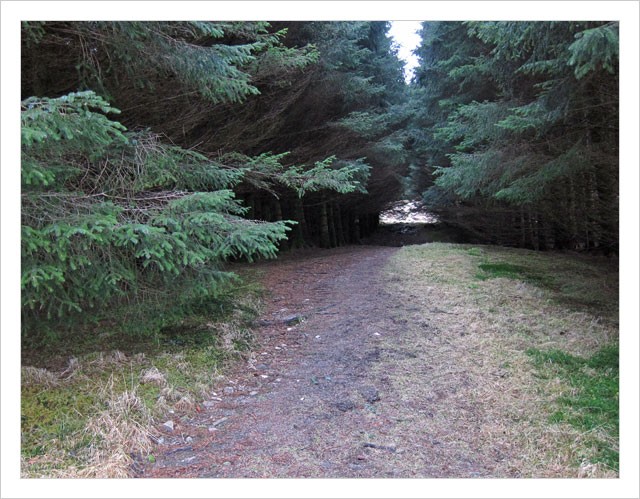 It’s a beautiful walk up through the forest although it’s hard to avoid a few boggy steps along the way. 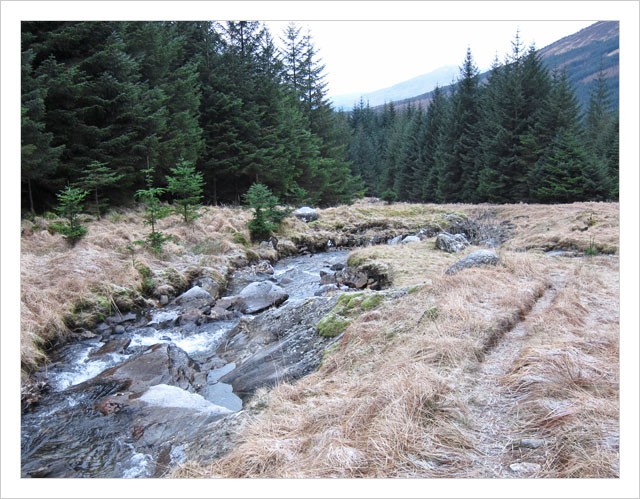 On clearing the forest both hills were covered in cloud and the ascent looked quite monotonous. 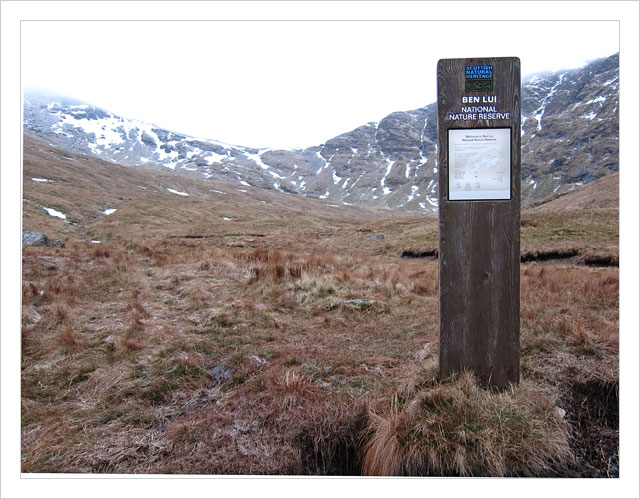 Looking back, well clear of the forest now. 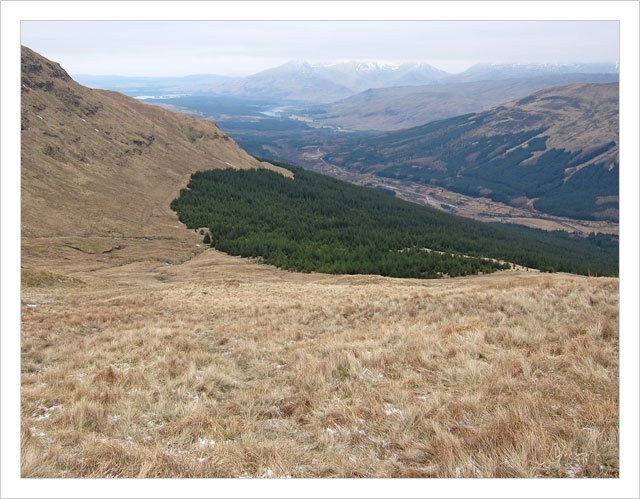 Headed into the cloud with fingers crossed that the forecast would be accurate
and produce some nice views higher up. 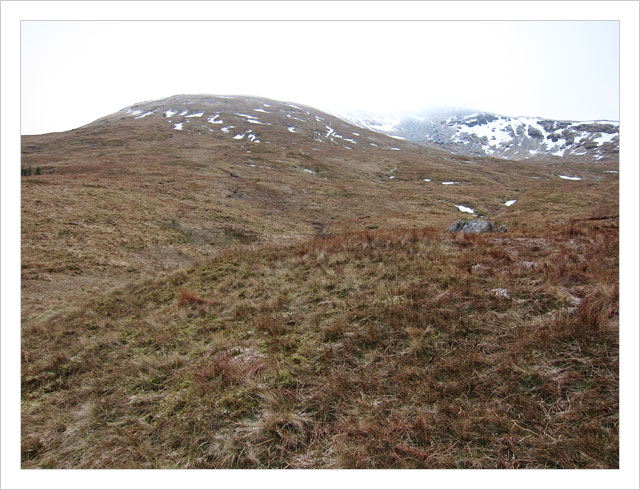 All of a sudden I was in a different world, looked amazing but it was intermittent,
lasting a few seconds each time before cloud was all around me again. 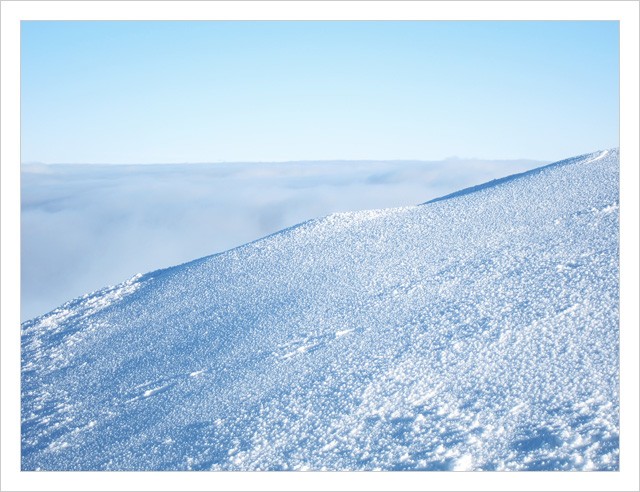 Pushed on up and was rewarded with some nice but fleeting views. 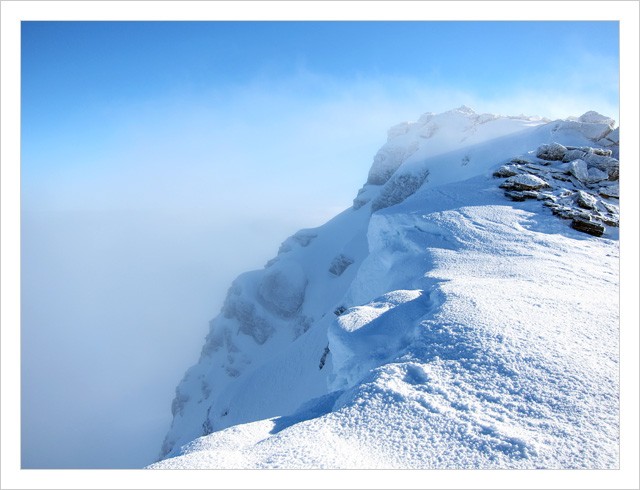 Brocken Spectre, saw this several times but the sun was in and out of cloud so quickly
it was difficult to focus the camera as I couldn’t see a thing due to glare on the lcd 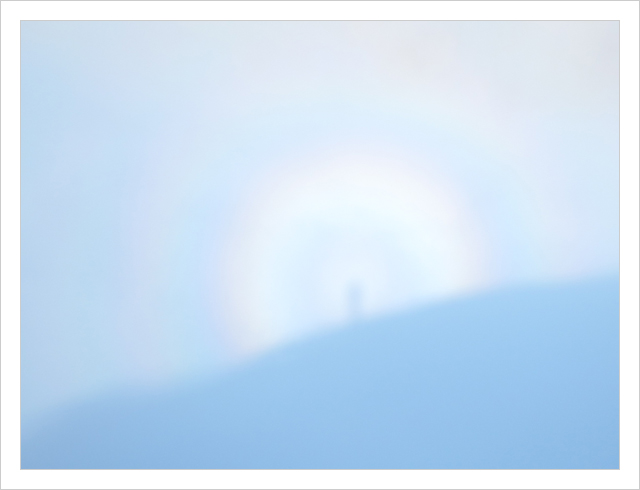 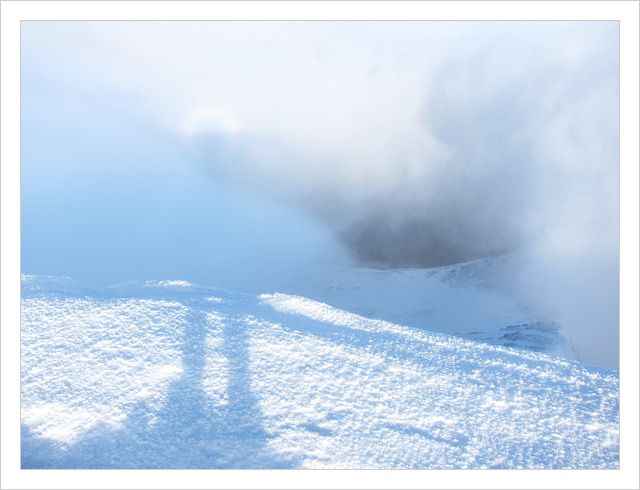 I was stopped here, at this cairn, for a while on what I initially thought was the summit. 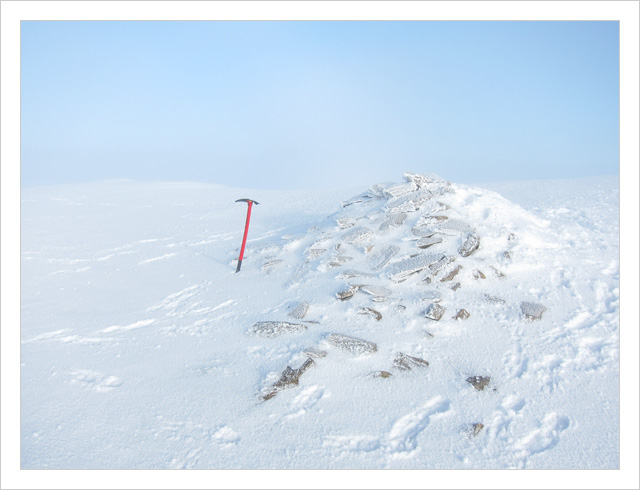 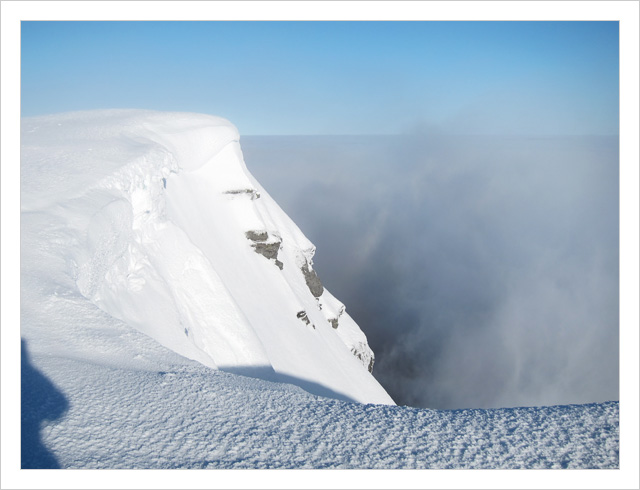 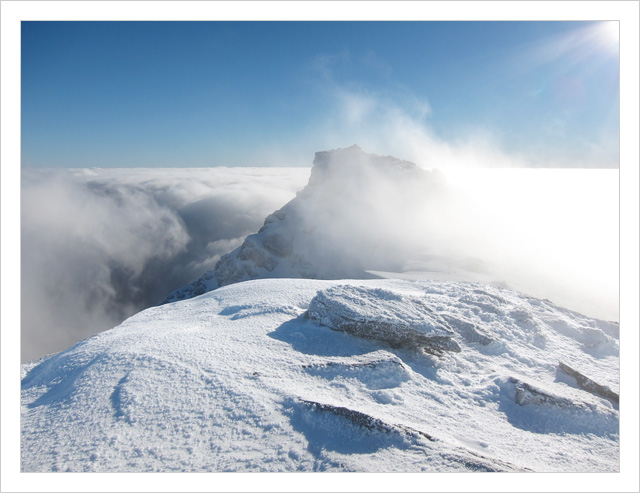 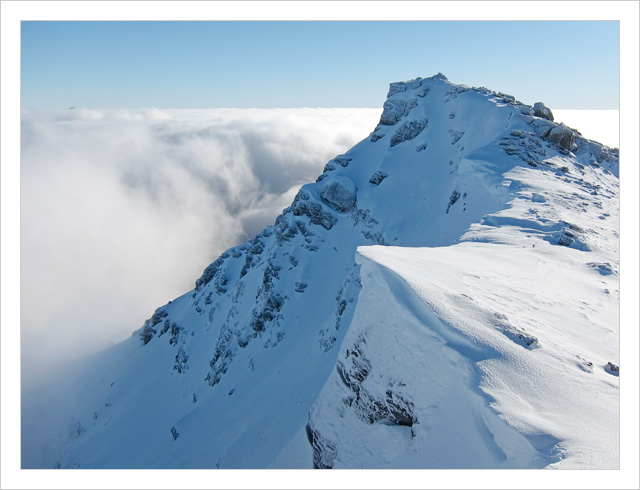 Very difficult to photograph as the light was changing quicker than I could set the camera.

Met one guy with his dog on Ben Lui summit and another 2 on the way down but there
weren’t many people on the hill today. 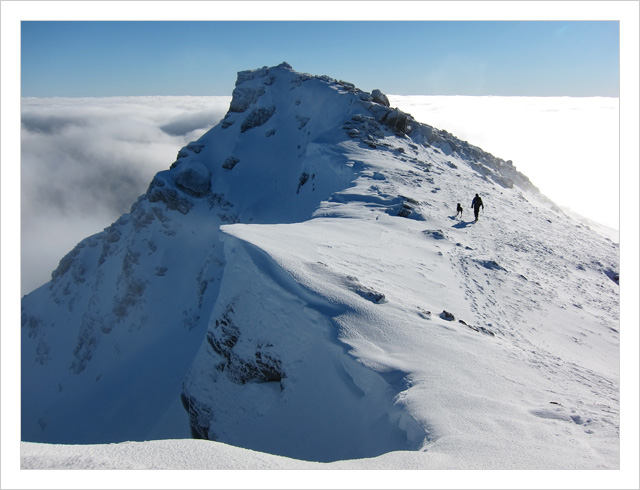 My Favourite shot of the day 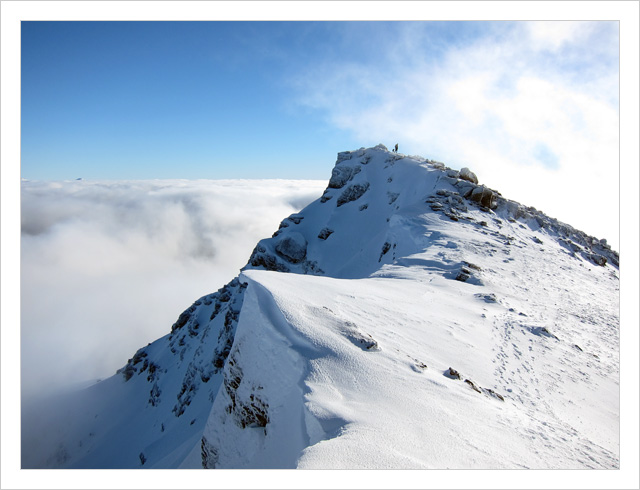 I stayed atop Ben Lui for quite a while hoping it would clear but the cloud came down, or up

and no more shots to be had.
Got a few nice ones though so no complaints.
Headed down, then up Beinn a’Chleibh to complete the walk.

Took around 6 hours but I reckon you could knock quite a bit off that as it’s an easy walk
and I was waiting on Ben Lui summit, both of them

This is one I’ll definitely be doing again.

Fantastic David. I did this last Sunday but got only clouds at the top of Ben Lui, however it gave me my first real chance to use the crampons I've had since last Feb. I could see those cornices close up but they look more impressive from a distance in your shots. The cloud was gone by the time I got to Beinn a'Chleibh but it was still a dull day overall. I'd say the worst part of the day was going through the forest. It was simply gross and I sank knee deep in mud at one point where there were no options but to trudge through.

Thanks Stretch,
Yep, the mud got me too, the worst bit was coming down the hill where I thought I was about to step on solid ground and I sank almost up to my knee. Struggled to get my foot out to be honest

You'd be glad of the crampons, don't think a lot of these summits are safely accessible without them at the moment.

You should try Ben Lui from the Dalrigh side if you intend on doing it again.It's quite a long walk in but it looks a totally different mountain from this side

You got some great photos there

Once again David great photos and a nice report.

What have I missed here? Why not leave them in the car instead of under some damp grass?

WOW - Great pics and reports - thanks for posting

Did you look for the buried capsule with the money inside of it?

Excellent - persist & you will be rewarded

Doing this in a few days

Stunning ! When you get views and inversions like that, you can't describe how you feel. The last few of Ben Lui are crackers.

Hi Davgil,
Great set of photos. Did you use a tardis to get from pic 08a to 1a it looks like a different planet

Lovely broken spectre and nice cornice snow line on the edge of the corrie. well done

pigeon - Thanks, I don't think I fancy that long walk in tbh

Huck Finn - Thanks I'm quite pleased with them although I wish it had cleared for a bit longer.
xpfloyd - Thanks again.
Chris W - Thanks.
RicKamila - No, only found out about it when you mentioned it

Alastair S - Thanks, yes it was about time I got above the clouds

Merry-walker - Yes. I do consider myself lucky after experiencing that

I hope you get as lucky with the weather when you get up there, good luck!
rockhopper - Thanks, yes it can be quite breathtaking.
monty - Thanks, yes it was just like a different planet, one minute I was walking in a dull grey environment, the next, the cloud opened up and revealed a beautiful winter landscape...no tardis required

Very nice indeed! I seen the MWIS forecast as well but couldnt get off work. Glad you got that