102 for 2019 and hitting the halfway point on Creag Pitridh

102 for 2019 and hitting the halfway point on Creag Pitridh

This would be my final outing of the year and as it worked out, I would hit two milestones on the first Munro... 100 Munro summits for the year and 141 overall. Never in my wildest dreams back in January did I think I would be in this position. It was not planned. I began the year still training for the road cycling racing season, as I had done for the previous 8 years or so. Every week was about miles, hitting targets, specific training sessions, heart rate data.....etc. I think my mind and body needed a rest from training and the burden of spending hours on the bike whether you wanted to or not. I had always dabbled in the hills, clocking up about 40 Munros before 2019, but often doing the same ones on numerous occasions as a change from the bike. Every time I spent time in the hills I would always tell myself "I need to do this more", and always loved it. The freedom and tranquillity of hillwalking is so enjoyable when compared to the discipline and hazards of riding on the road and all of the hate that you often receive from drivers. It was quite difficult at the start of the year letting go of my focus on training and racing, however I enjoyed the hills so much that this faded away fairly quickly and I soon replaced this focus with a fresh enthusiasm for spending time walking up hills. It might be fair to say that I have a rather addictive personality, and so by the morning of the 9th of December, I had marched on to 99 Munros for the year and 140 overall.

I still do enjoy a good bike ride however, so it felt appropriate for my chosen final trio of Munros in 2019 to involve a bike/hike. After very high winds over the weekend, I had a decent looking window of weather to tackle the Creag Pitridh trio. It was a very chilly morning, and a fair bit of new snow was lying on the hills around Loch Laggan as I parked the car in the layby. The weather was looking good however I never saw another person all day on these hills. Total solitude! 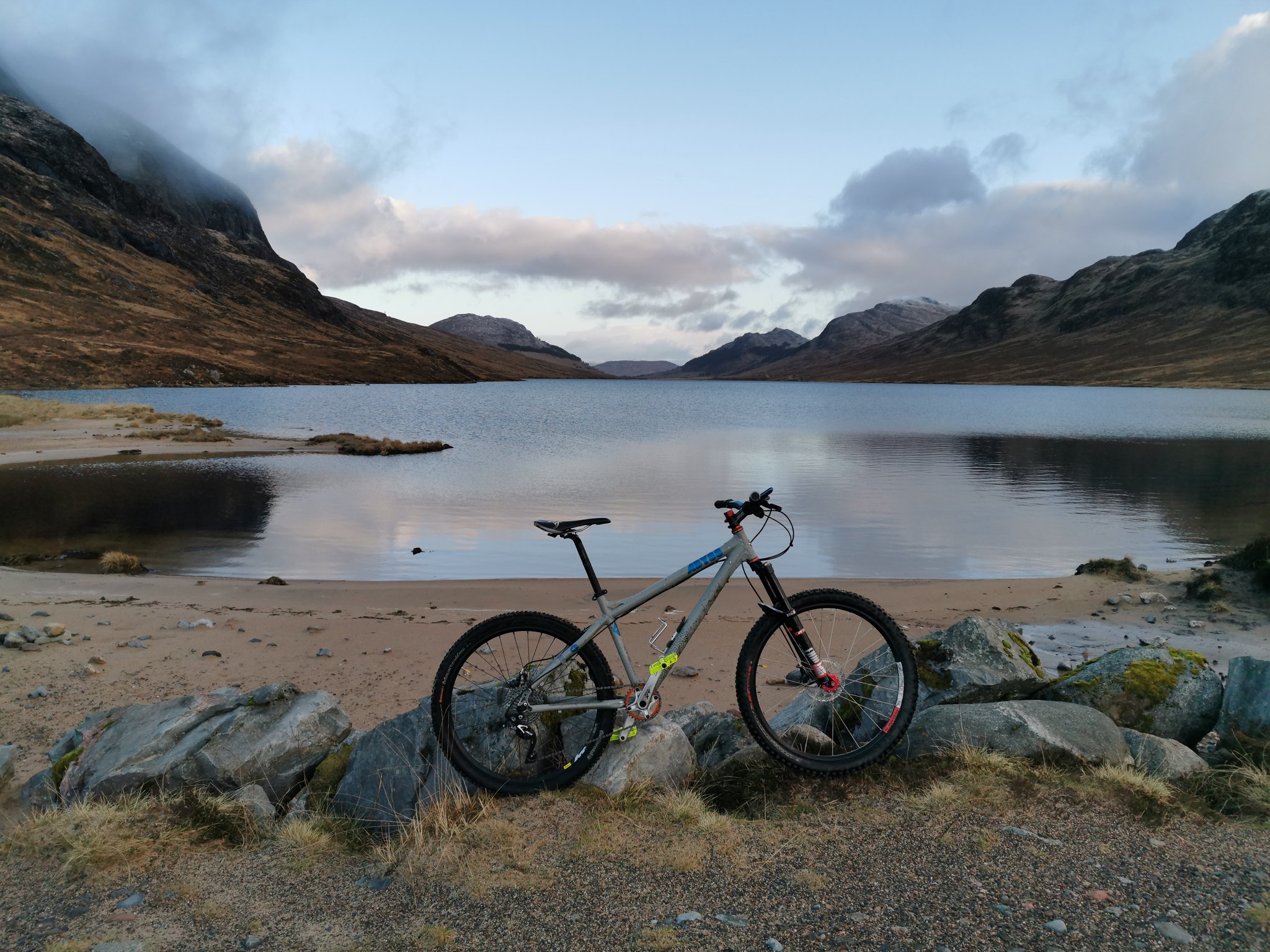 The noble steed on the track to Lochan nan h-Earba 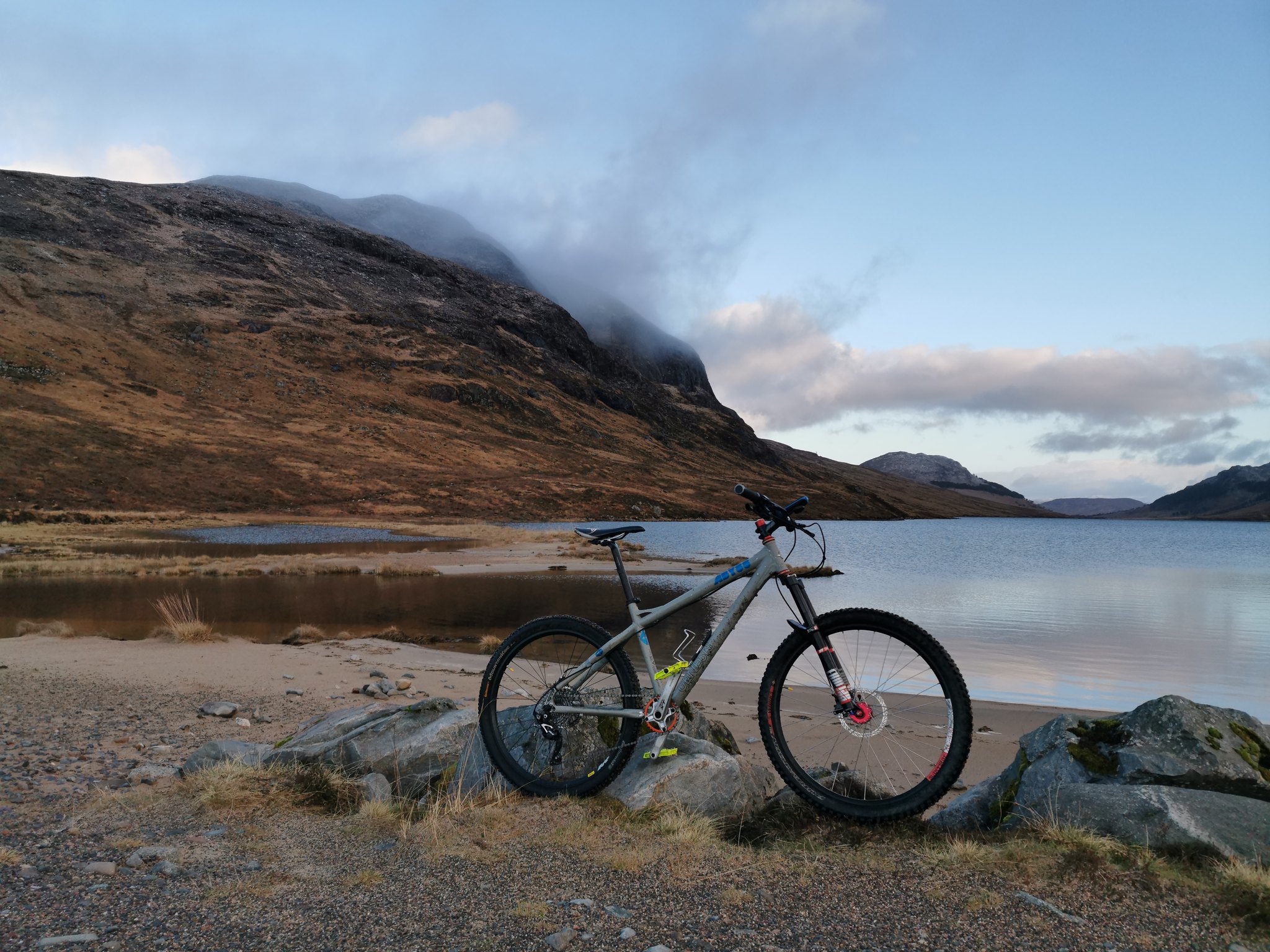 A fine spot for a bike picture

The track is a land rover track up to the lochan and easy cycling. The track does continue for about 1km from the lochan, however steepens and makes for tough going on the bike. I decided to dump my bike after 6km from the car, at said steeper section. With the added weight of crampons and axe etc in my bag, slogging up the track would not have been fun. I started up the track on foot, soon taking a very faint track towards Creag Pitridh. 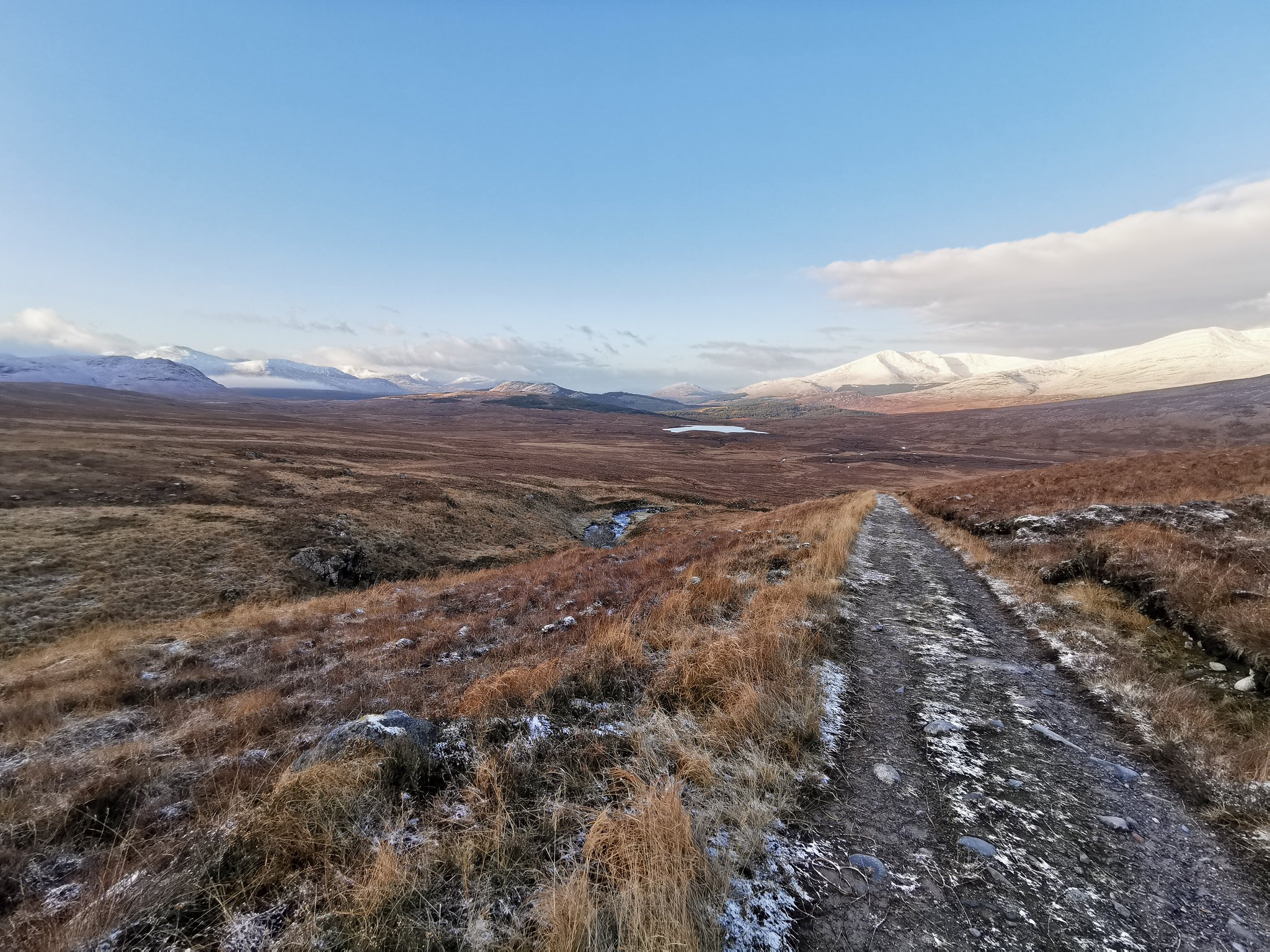 Now on foot, looking back down the frosty track 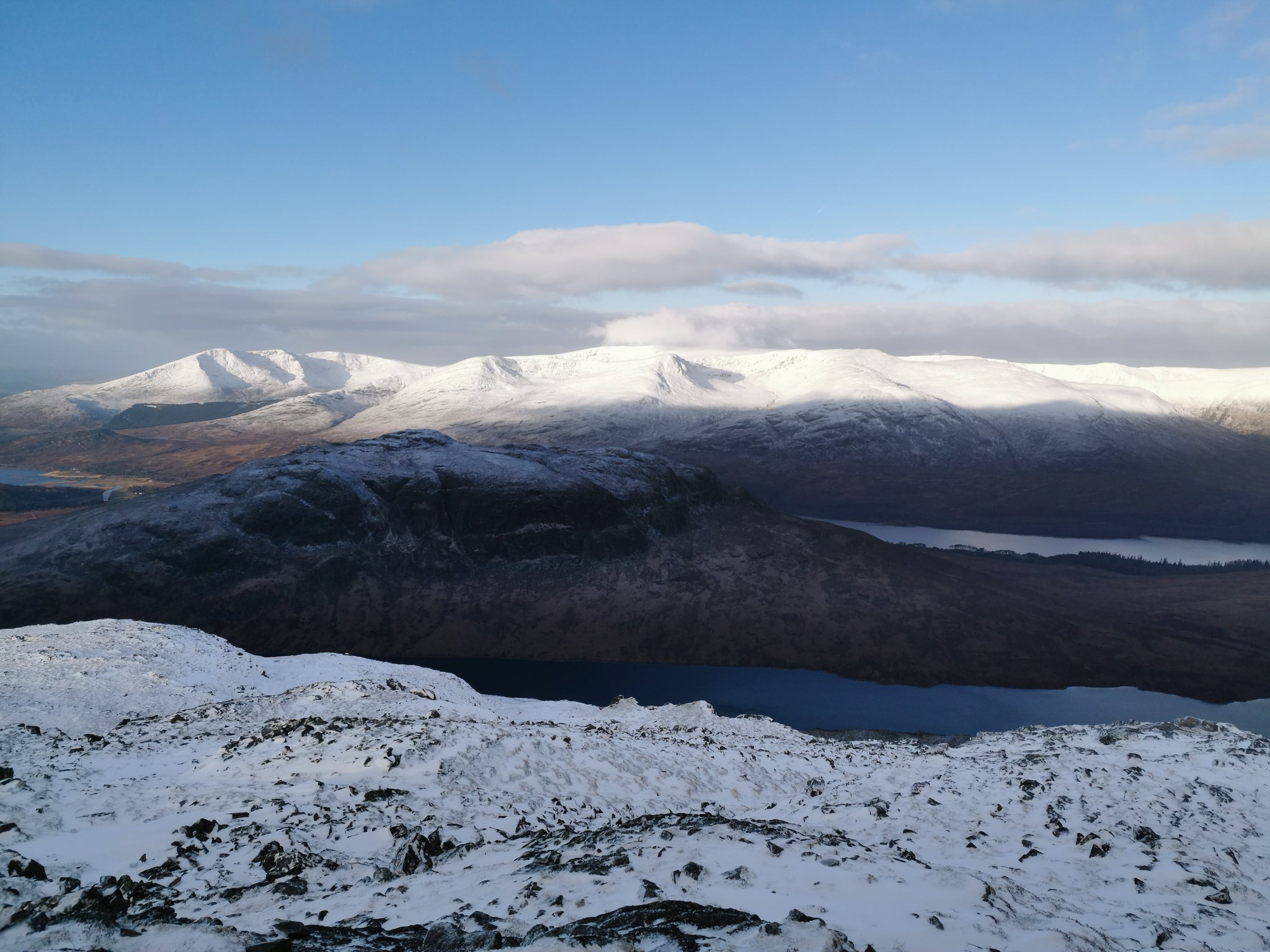 Approaching the summit of Creag Pitridh

Due to the snow, the path didn't exist if there was a path at all. This sort of made it easier, it was just a case of pointing towards the summit and battering my way through the snow. Although hard going, it didn't take long to reach the windy summit cairn and my wee personal milestone. Feeling quite chuffed, I took in the views and grabbed a coffee before setting off again towards Geal Charn. 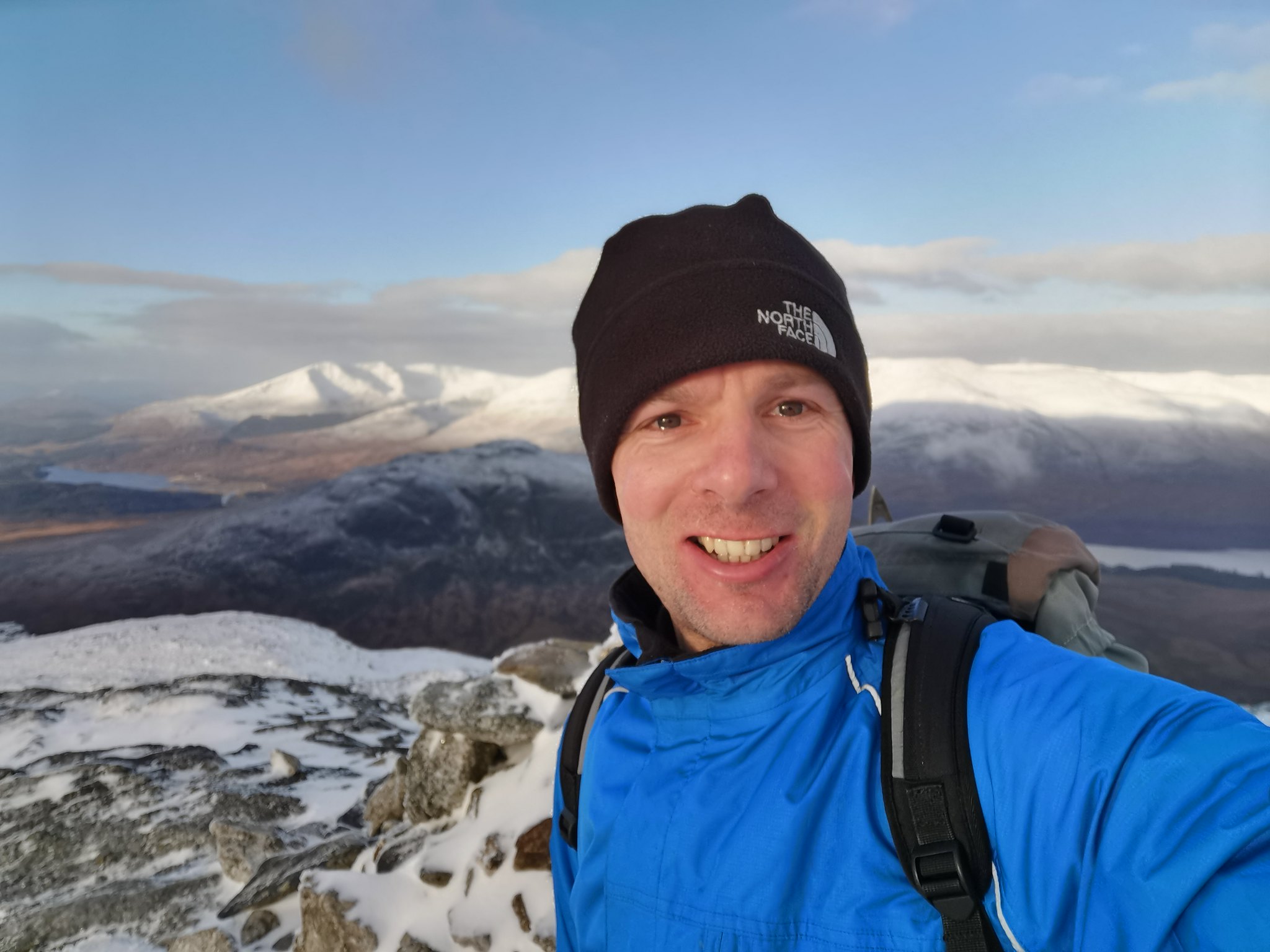 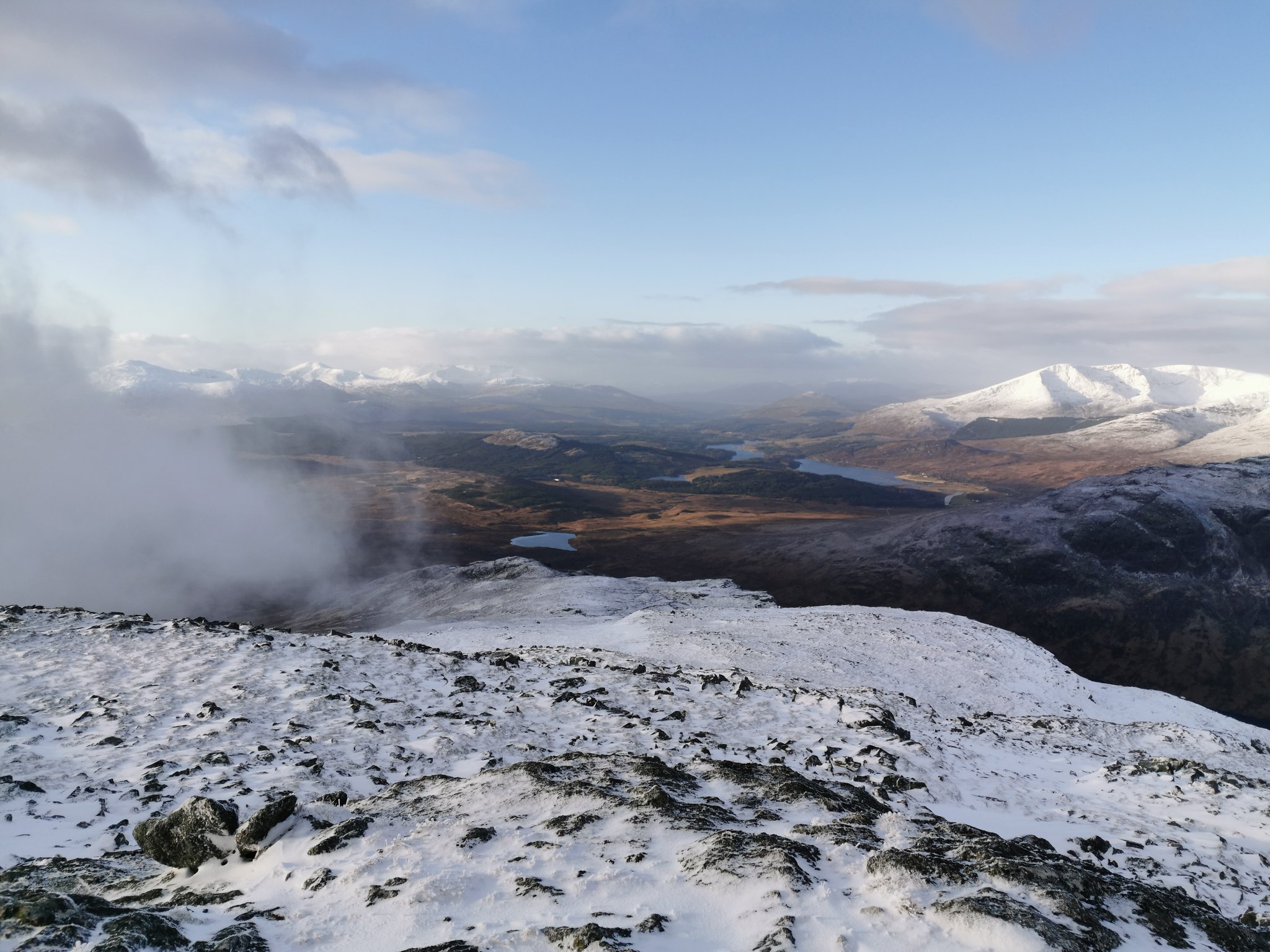 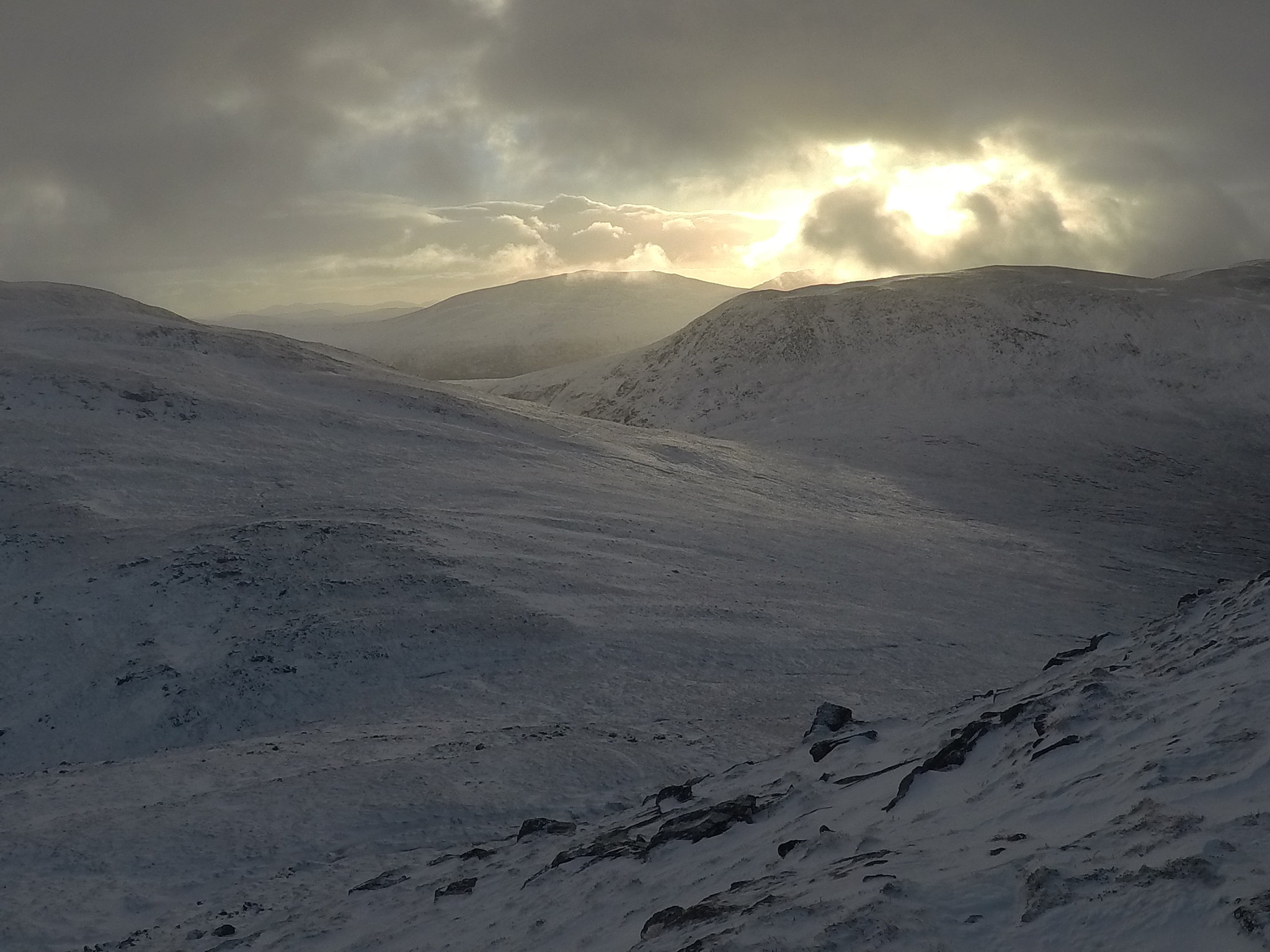 The view south towards Carn Dearg and the Ben Alder group


There isn't much in the way of a descent from Creag Pitridh, albeit the snow and rocky nature of the descent made it a bit of a faff. Again, there was no path or footseps in the snow, so it was another point for the top job and straight line the ascent to Geal Charn. 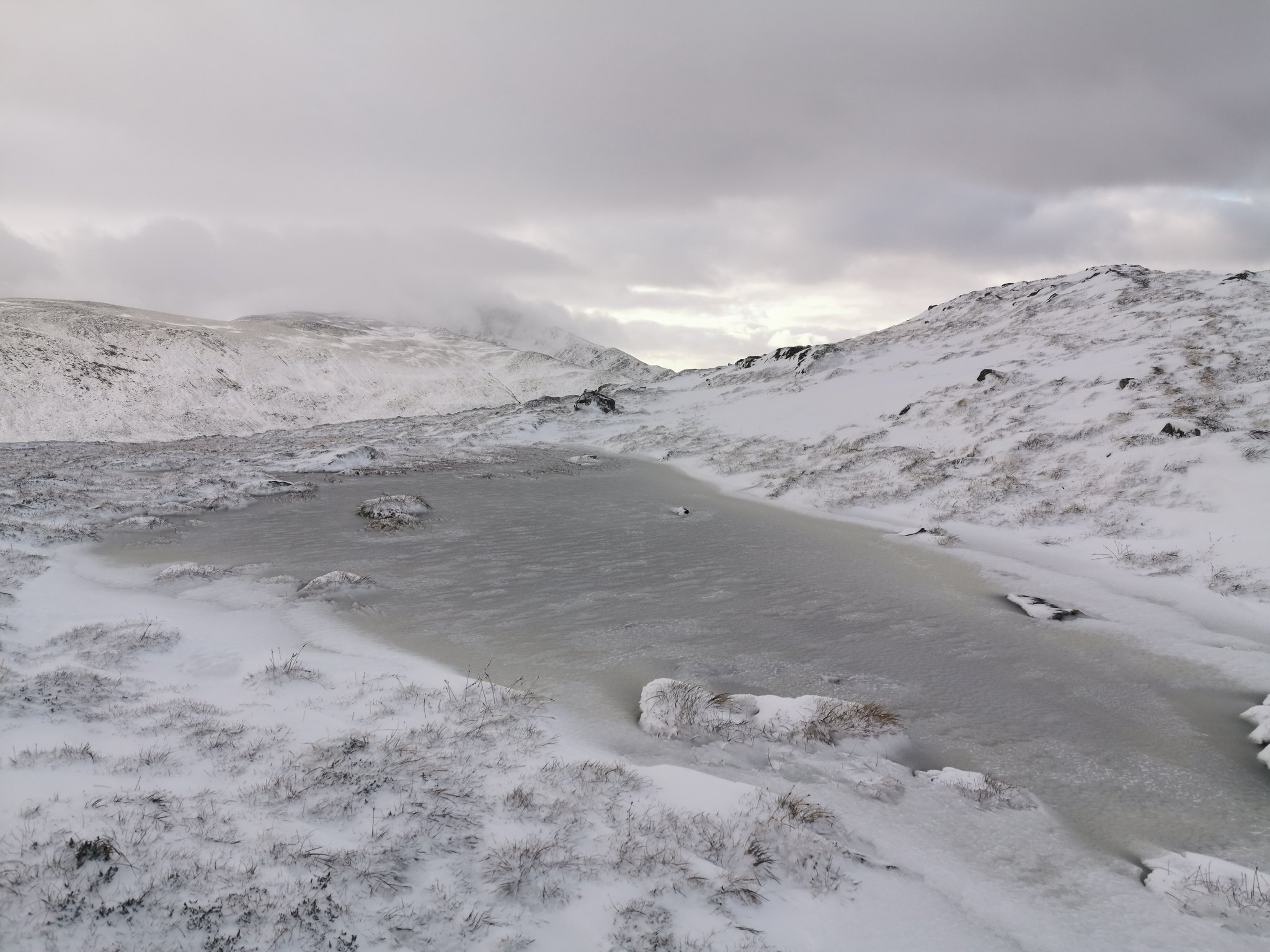 Frozen lochan on the ascent of Geal Charn 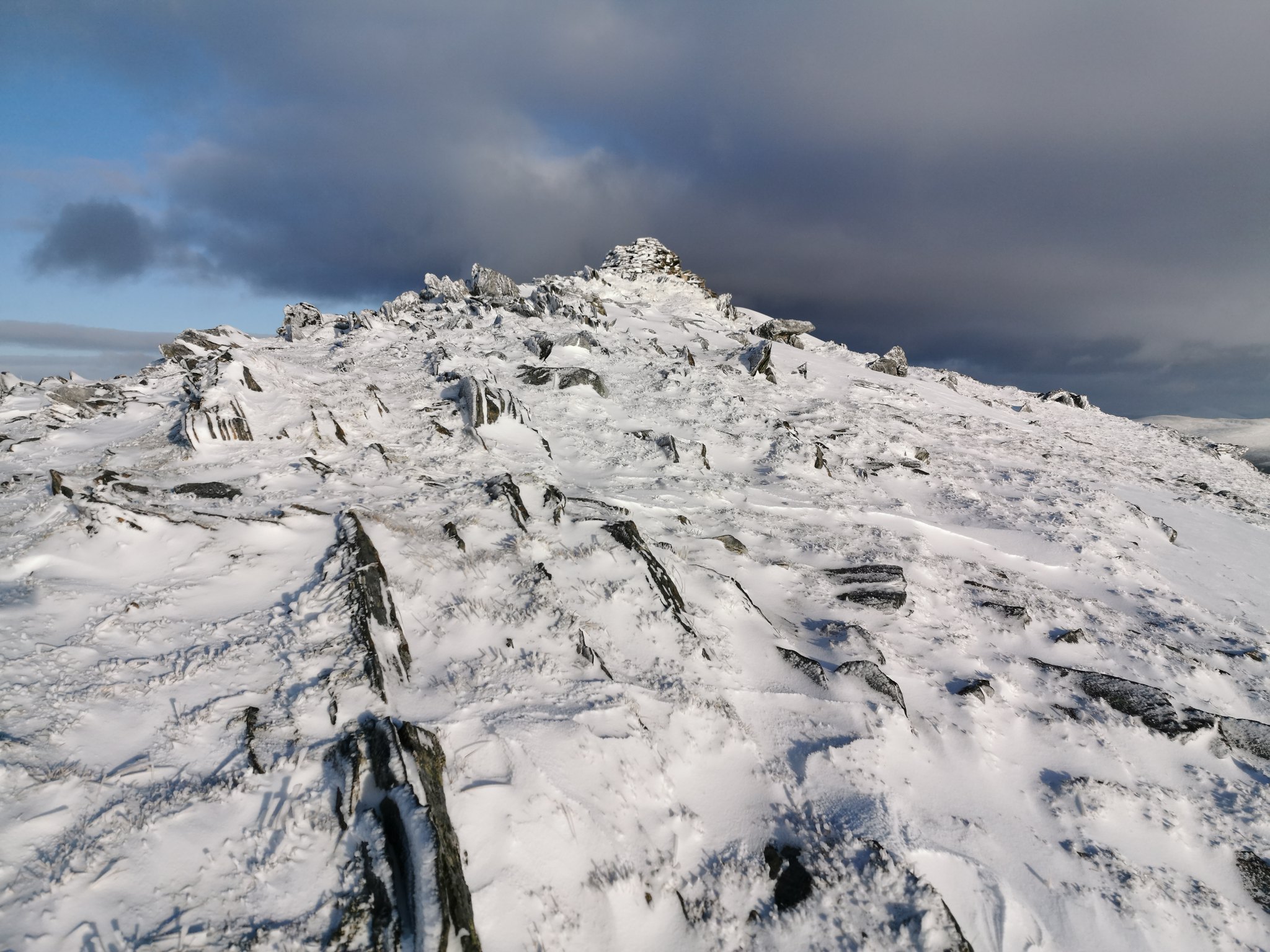 The rocky summit of Geal Charn 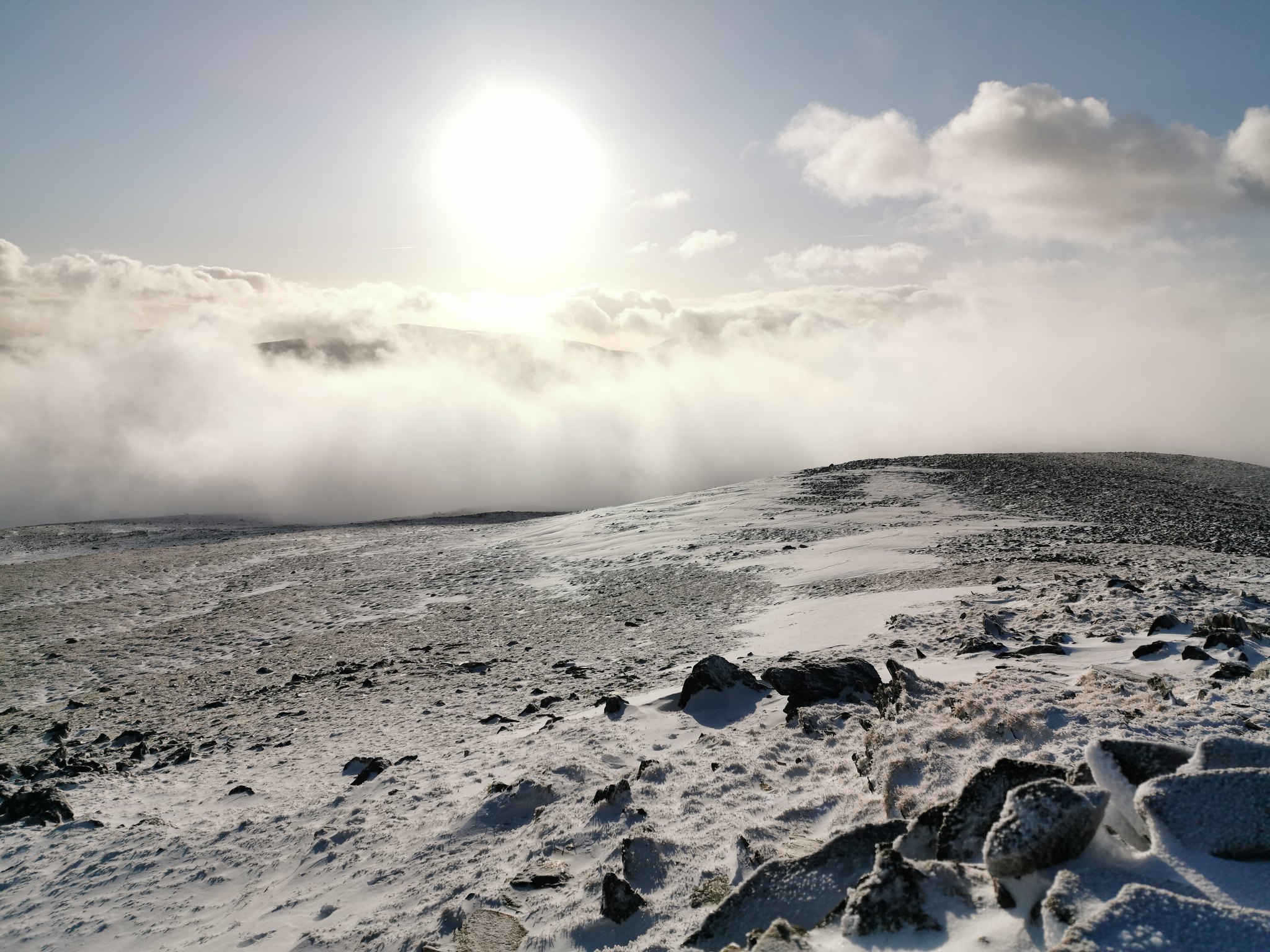 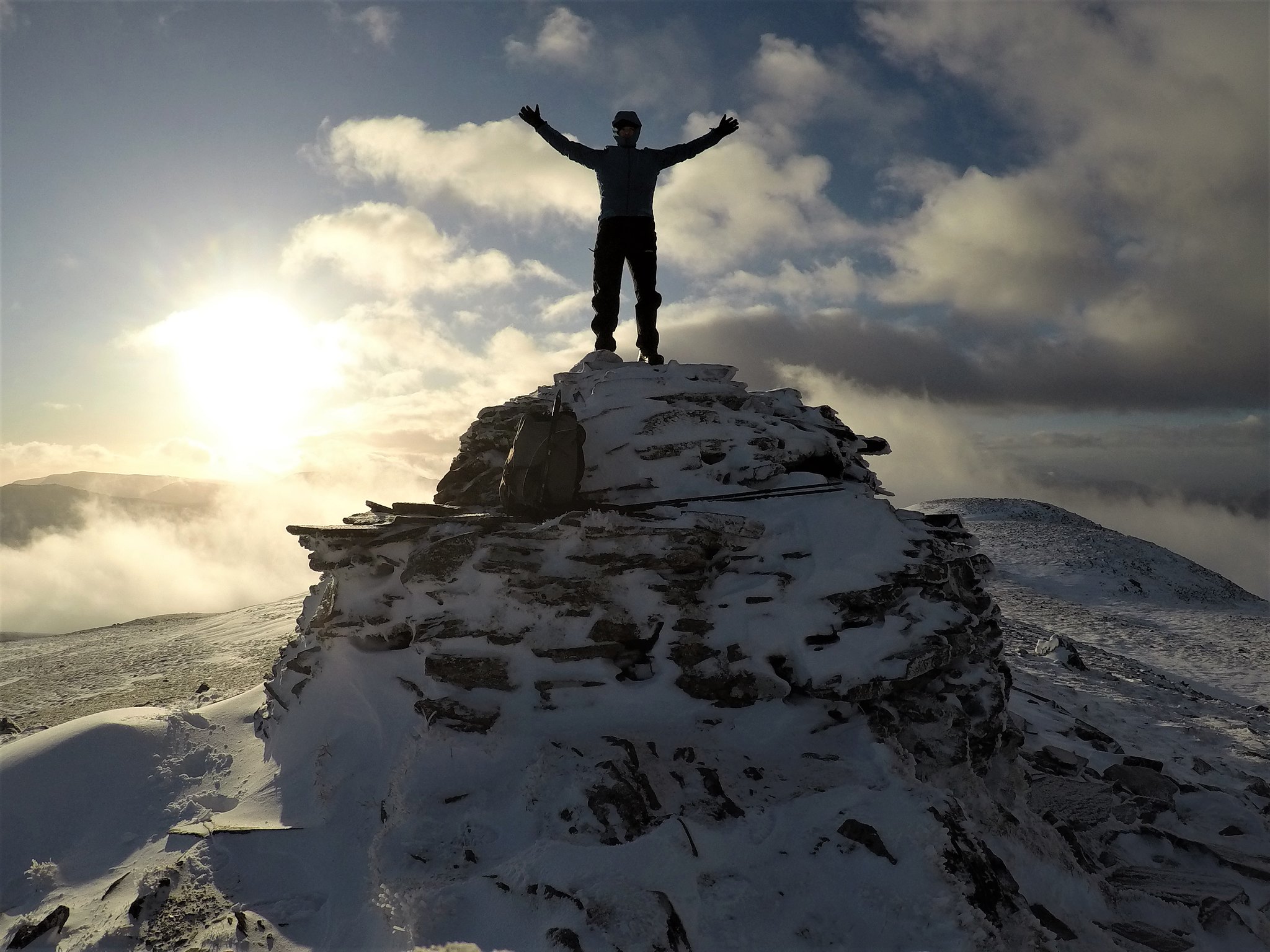 Yaassss! Conveniently placed trig point next to the cairn 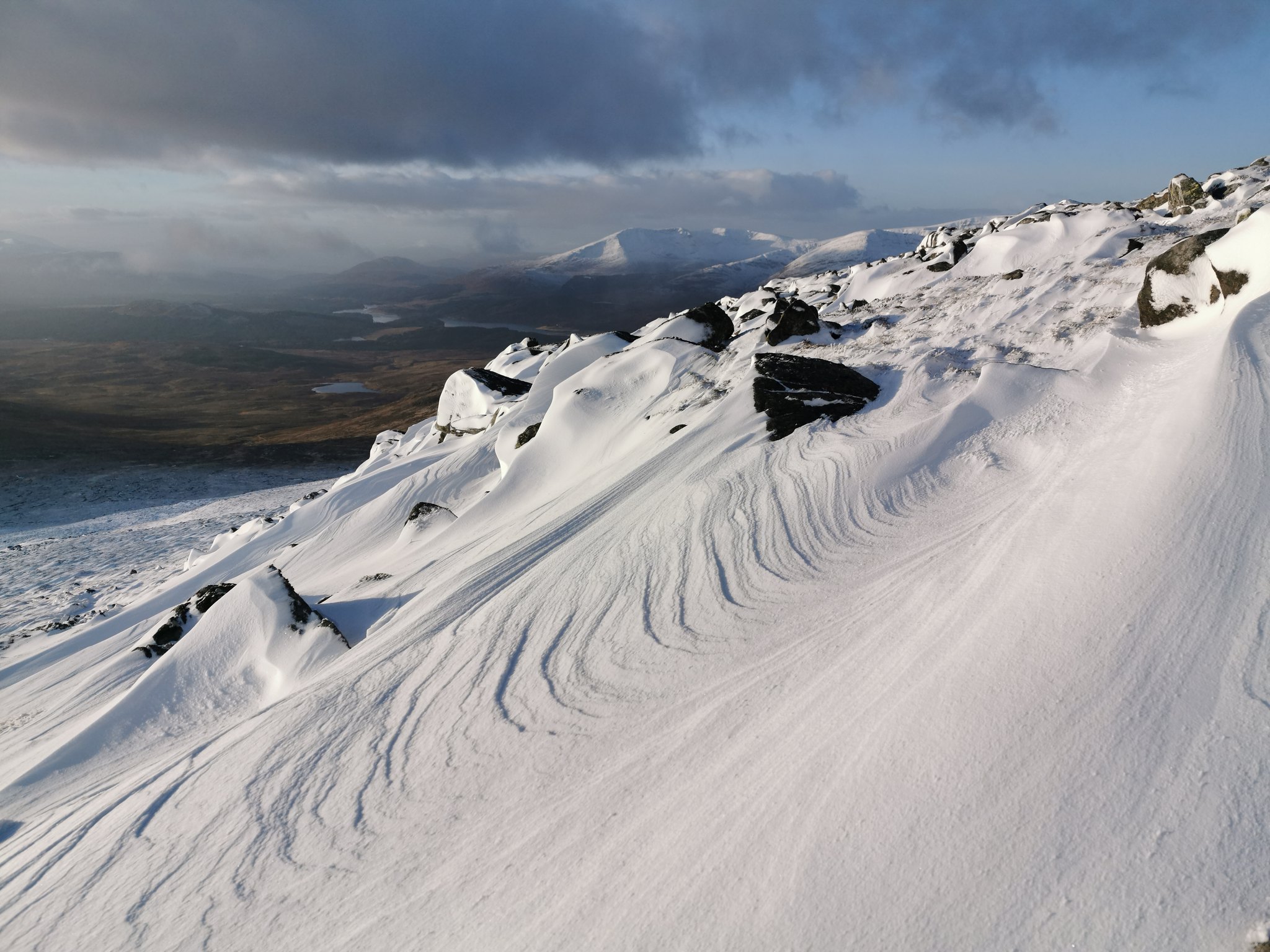 Some interesting and picturesque snow formations on the descent from Geal Charn.

After taking a break before starting up Beinn a'Chlachair, I then ended up scrambling up a very steep, rocky slope, which turned out to be a frozen stream. I probably couldn't have picked a more difficult route if I tried, but it was good fun. 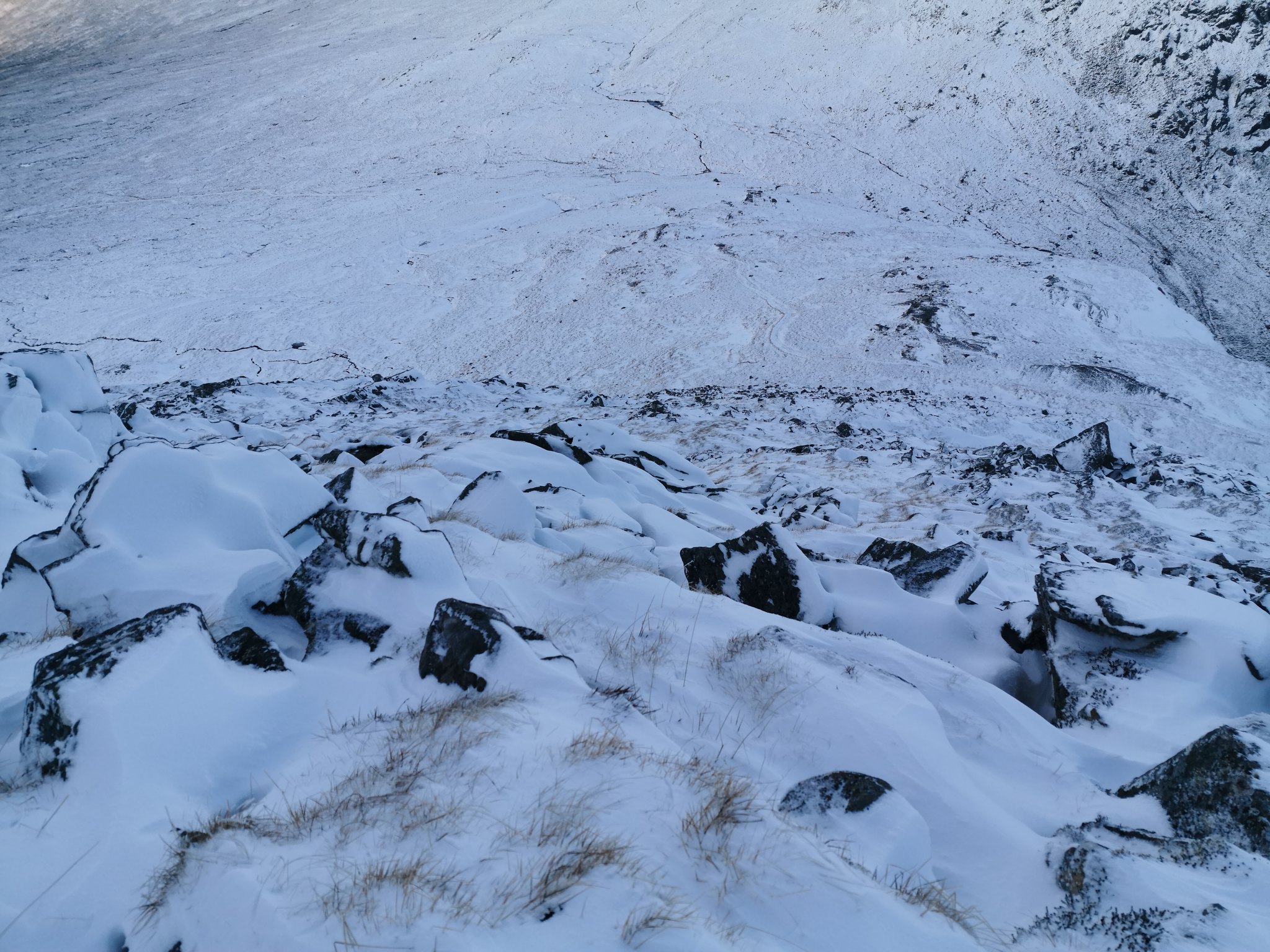 After the steep madness was over, a lengthy plateau ridge seems to go on forever towards the summit. I was in the cloud at this point and kept getting brief glimpses of the summit which looked to be about 100 miles away at times! Eventually, after a fair slog along the plateau, I reached Coire Mor a' Chlachair, which was a fine sight. The cloud had lifted and the sun was already starting to go down at 3pm. 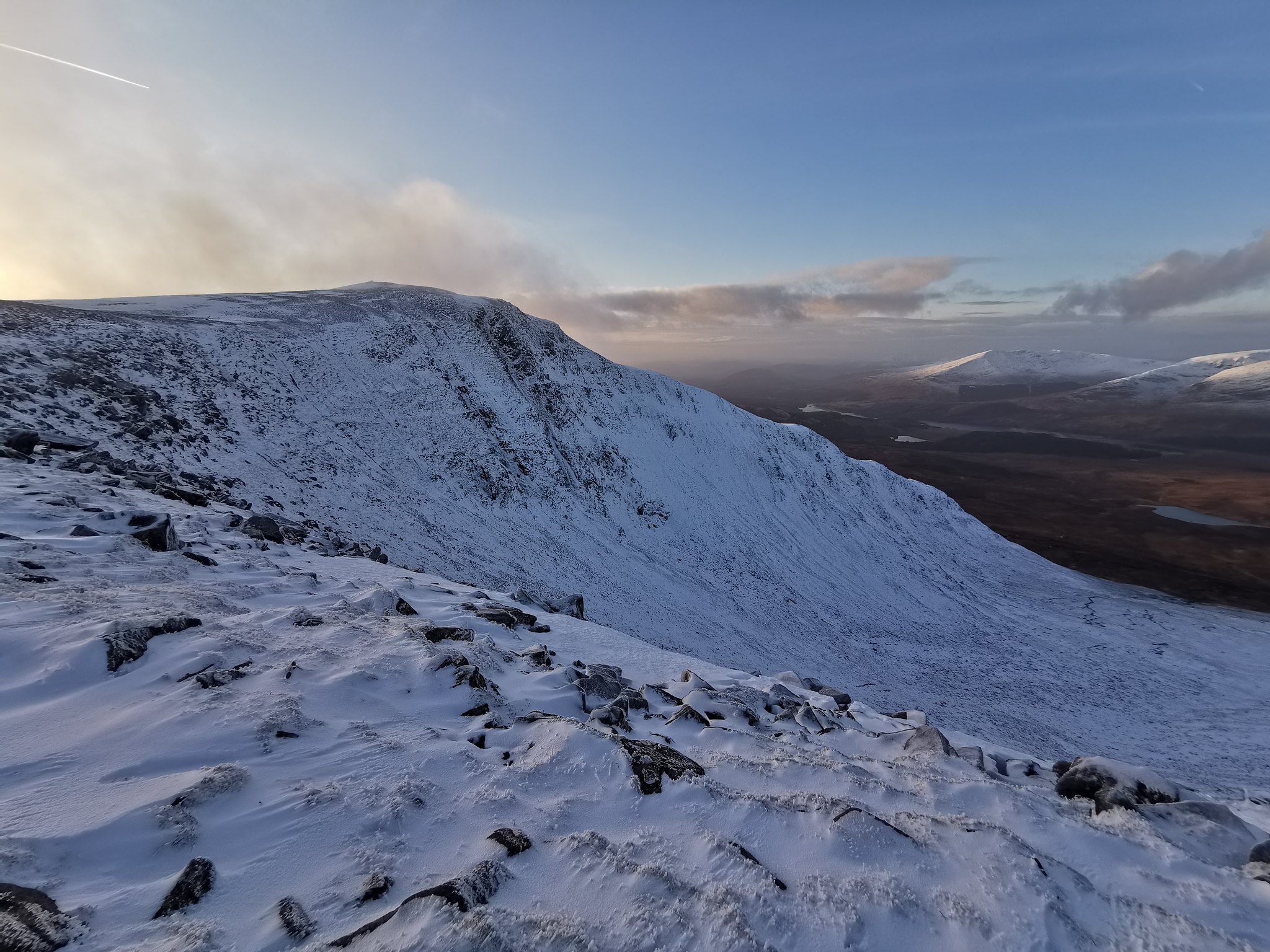 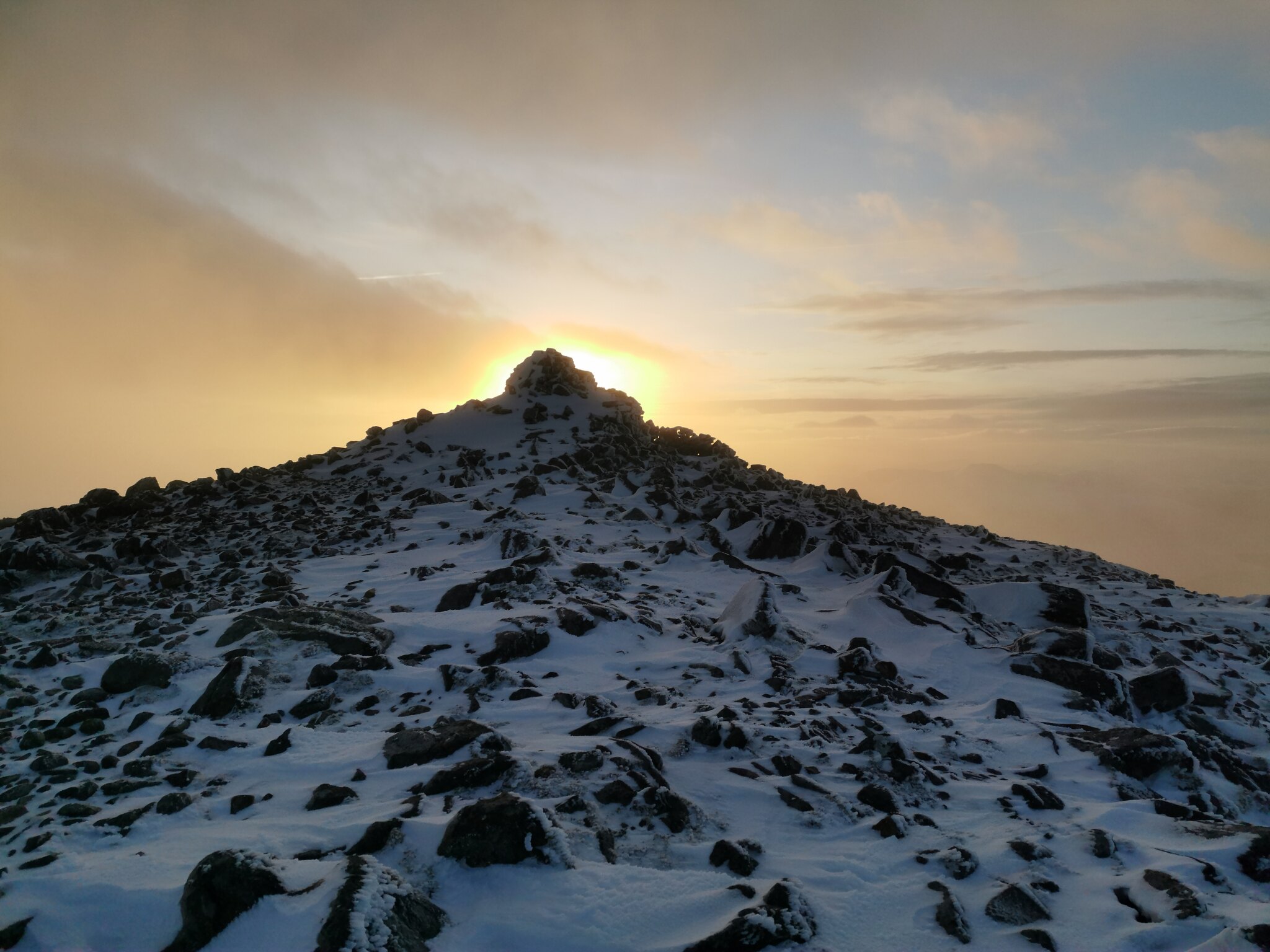 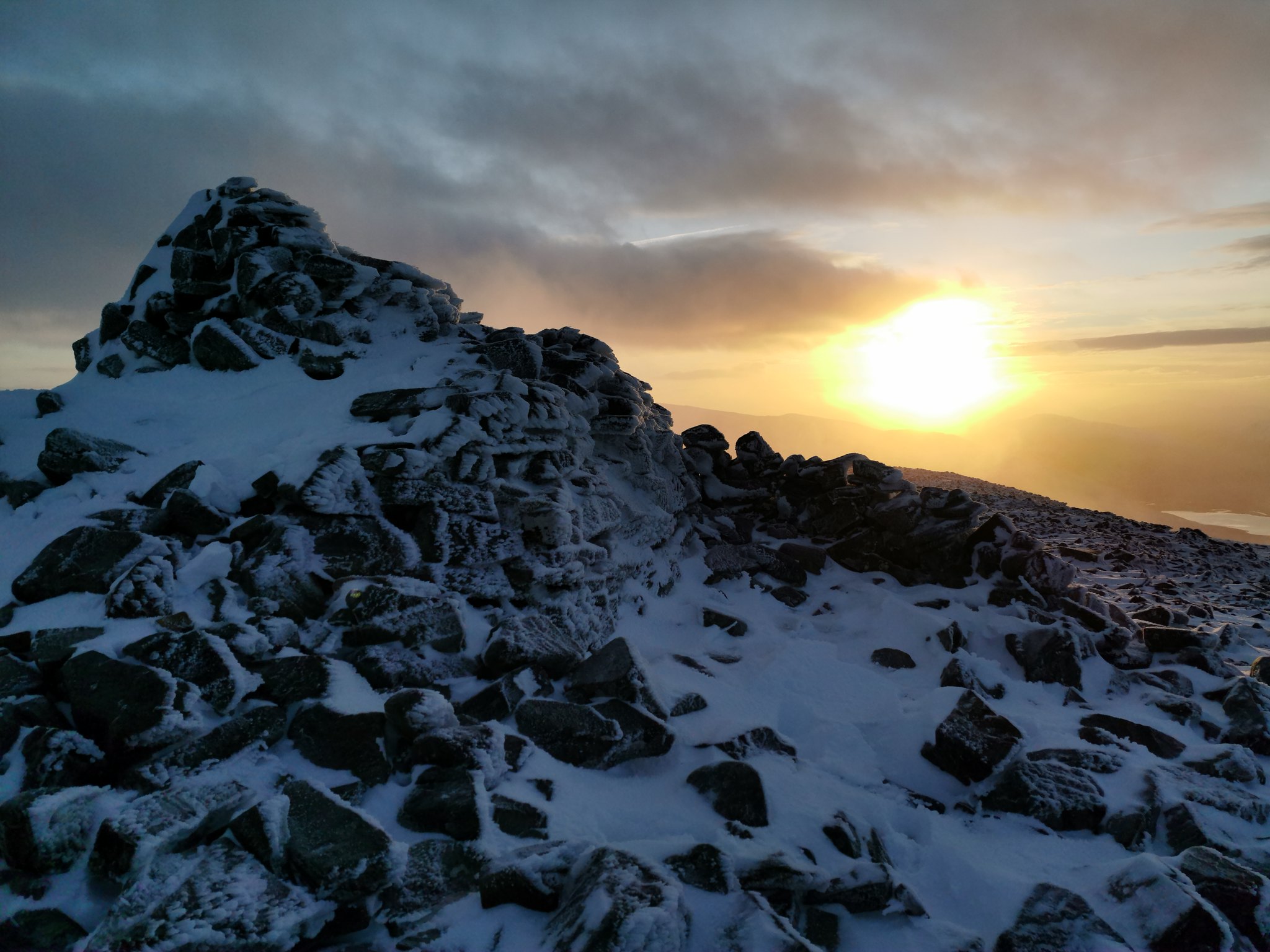 Beinn a'Chlachair summit, and getting close to sunset already 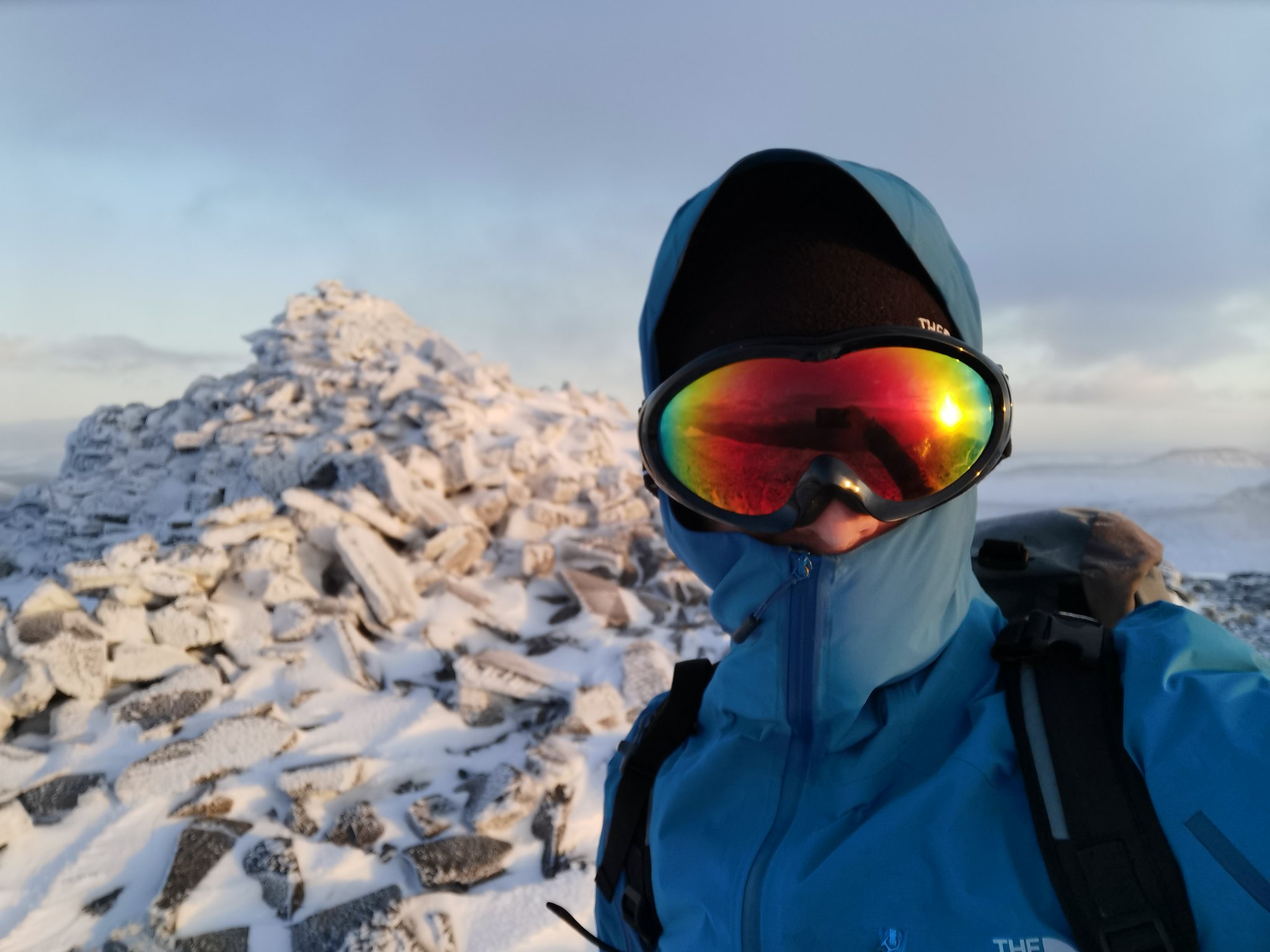 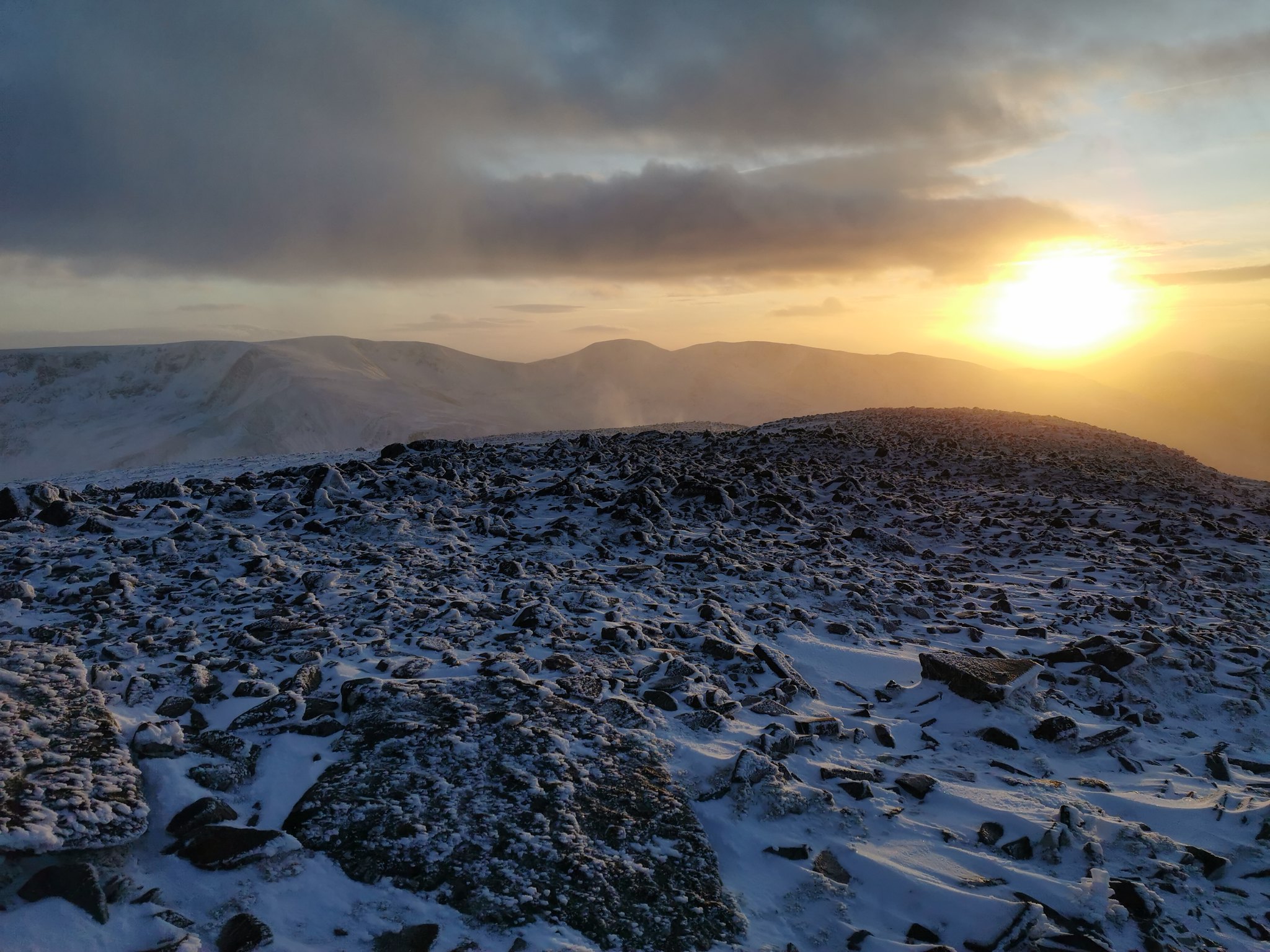 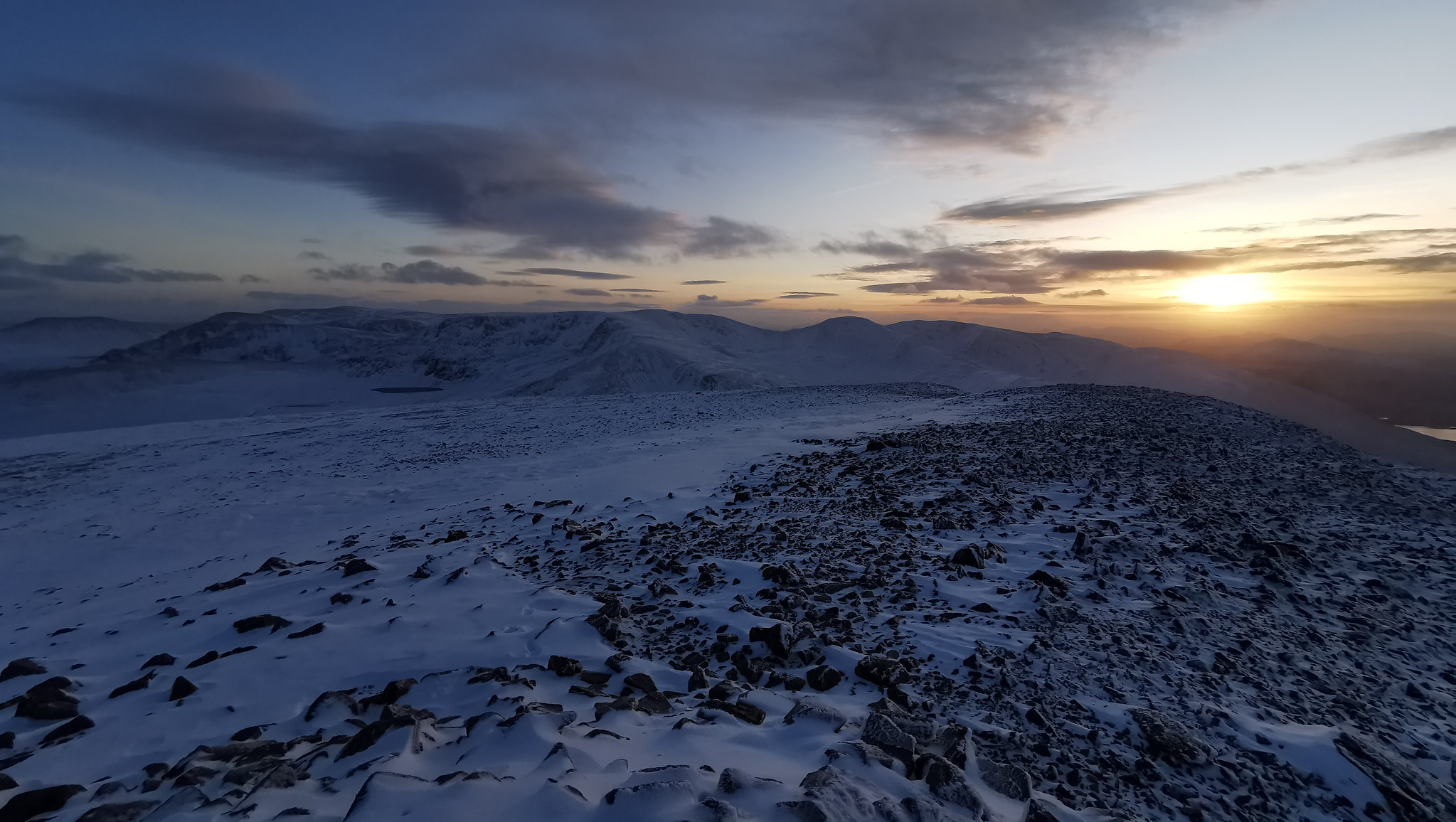 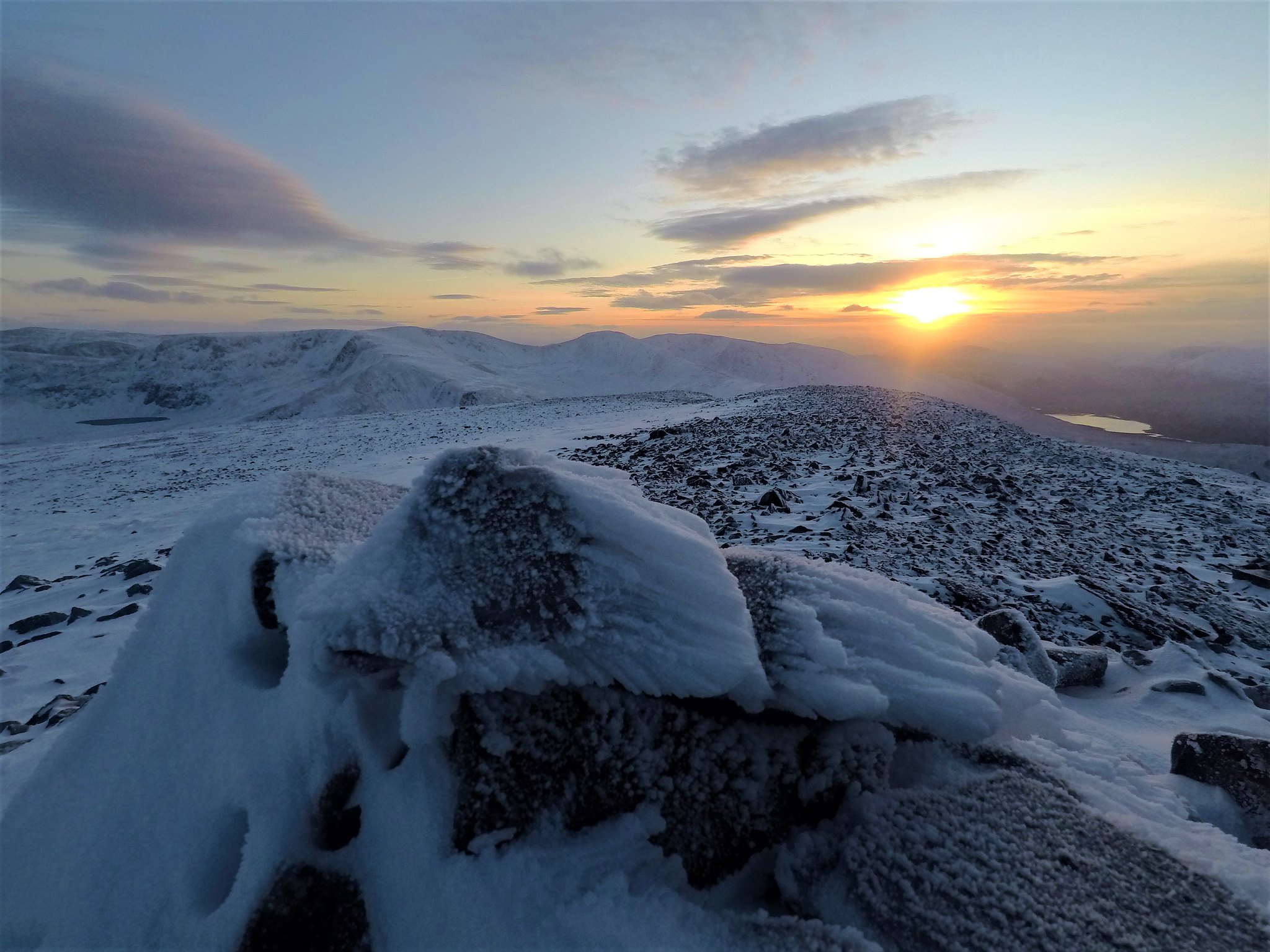 Unfortunately, although it was looking like a cracking sunset was about to happen, I thought I better retreat from the summits as I would be finishing in the dark as it was. Pity as the skies really did light up red! 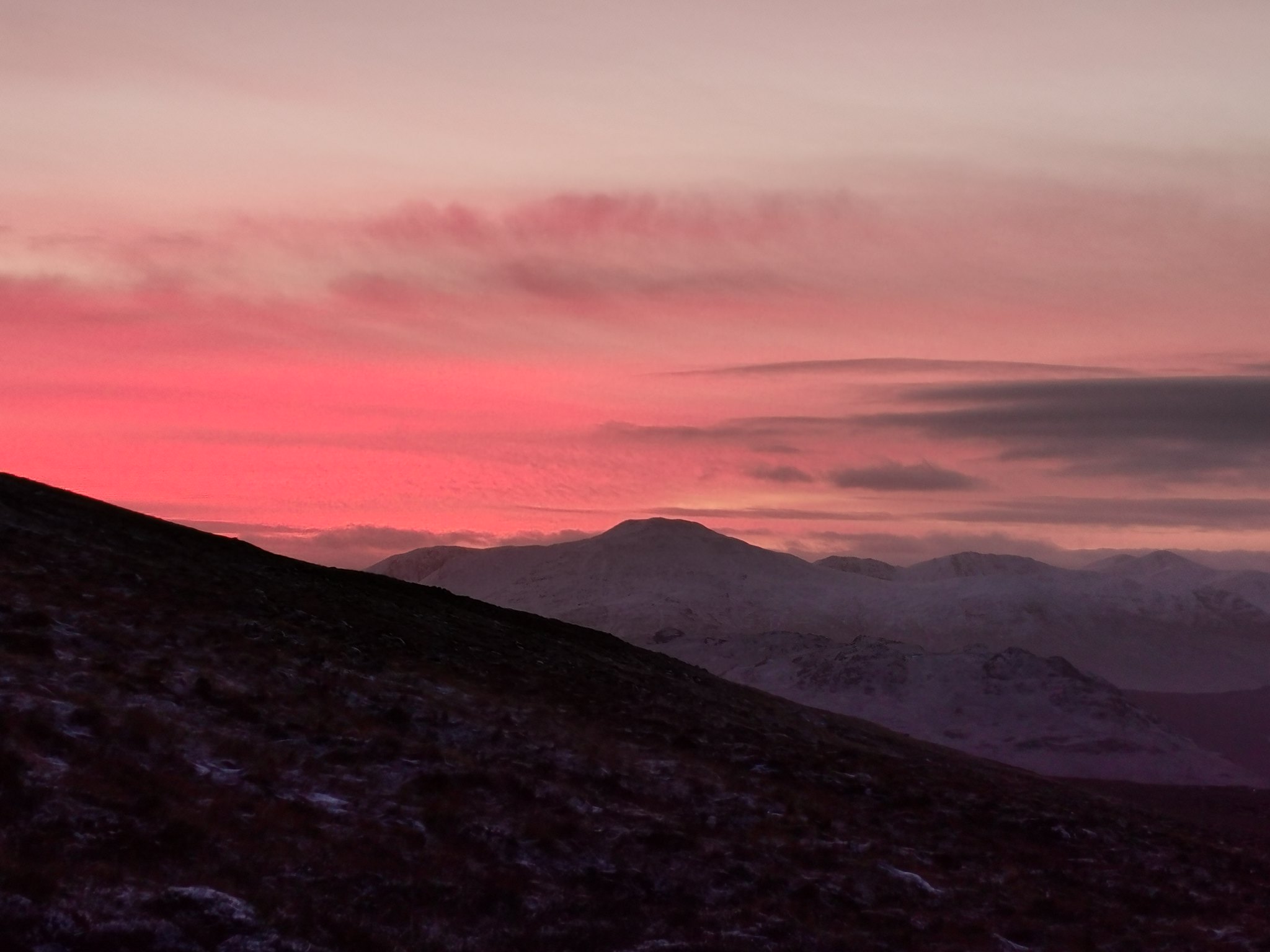 Still, with a pathless, snowy descent over rough ground, bog and rocks, I made a good call to aim for the land rover track prior to it turning pitch black. The moon came out to play which helped the light, before relying fully on my head torch. 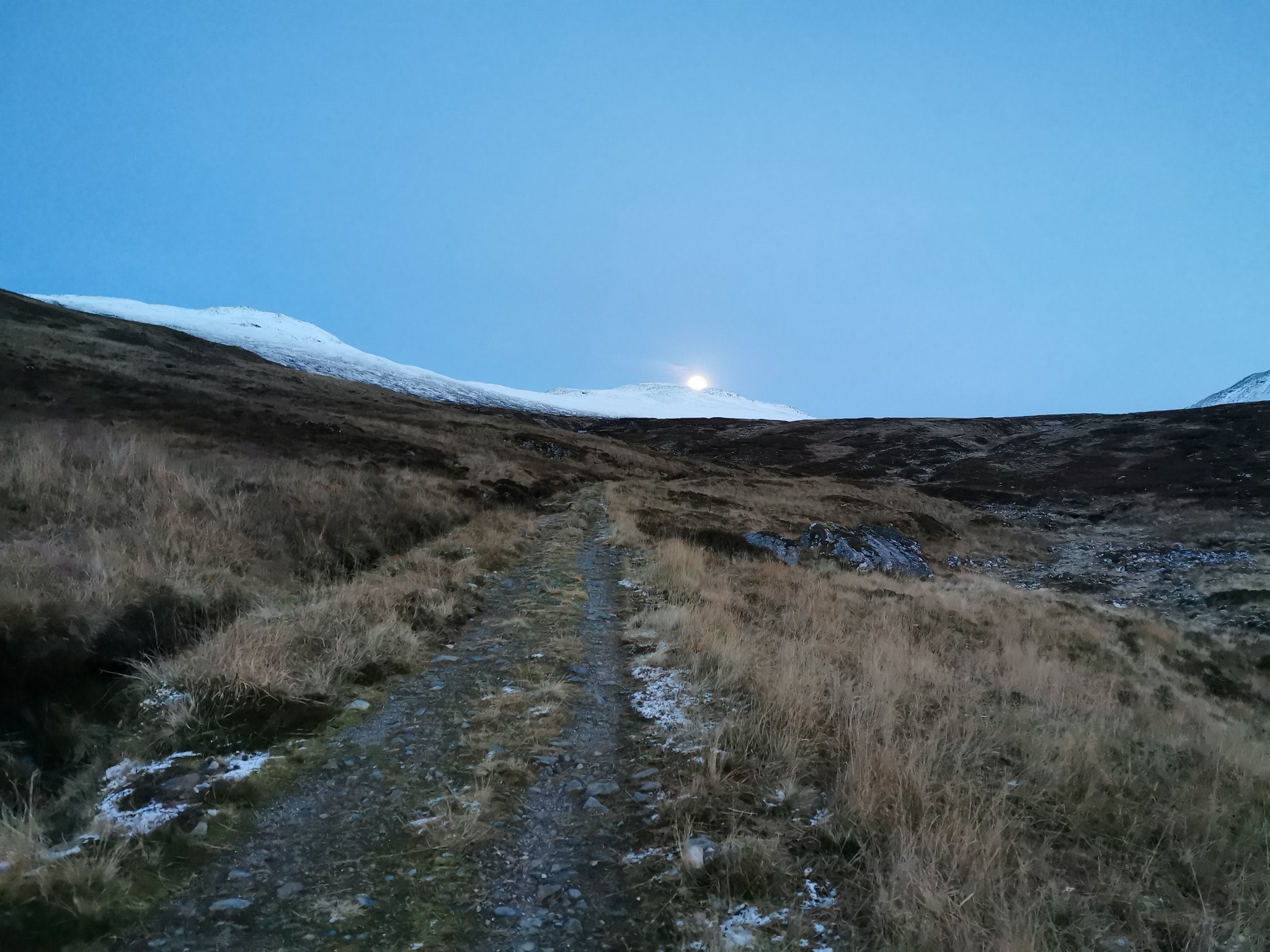 Moonrise on the descent back to the bike.

After a lengthy trudge, I was relieved to locate my bike next to the river and set off under my head torch light down the good track to the car. Nothing technical here at all, an easy finish! If you have a bike, I would recommend taking it unless you don't mind the extra distance walking. For me it adds a bit variety to the day and saves 12km of walking which speeds things up a bit.

So, walking in Scotland in 2019 is over. I fly off to New Zealand tonight to go and play in their hills instead over Christmas and New Year. What a year outside it has been...

I'm already looking forward to 2020 in Scotland, many more adventures planned!
Will I race a bike next year? I don't think so...

Well Done. Think you have as the say taken to the hills like a duck to water.

R1ggered wrote:Well Done. Think you have as the say taken to the hills like a duck to water.

Thanks! I think that is a fairly accurate assessment... It's an amazing escape from work and everyday life. Love it!