Back in February, inspired by the SMC Grahams and Donalds book, I set off up snowy Dundreich in the hope of following Percy Donald around many, most or perhaps even all the 140 hills and tops - maybe the first Orcadian Donald bagger.

A month later I was flat on my back struggling with shingles, which effectively put me out of the game for weeks and ruined hopes of graduating from sub-2000s to something a wee bit grander until the autumn.

As a result it was great to get down to Edinburgh for a short holiday to see my son and daughter and follow Percy's example by getting on a bus to climb some hills. 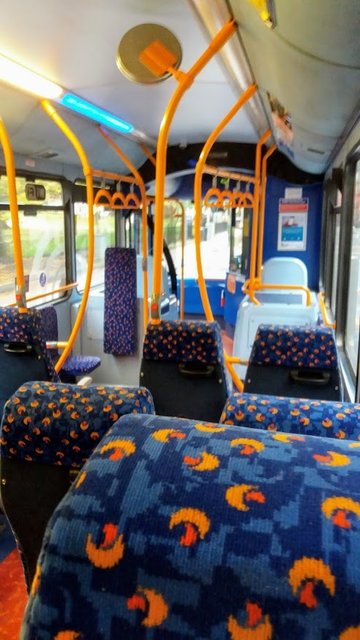 I chose to get the 8.20am Stagecoach 101 from Edinburgh bus station as far as Biggar then change to the 9.51am Borders Buses 91 to get to Drumelzier - giving me 11 minutes to cross the road to the opposite bus stop. Sad to report only two other folk used the 101 the whole way, while four others were aboard the 91.

Everything went to plan and I was dropped off in Drumelzier at around 10.20 - leaving me nearly six hours to do the walk. My original plan was to include both The Scrape and Taberon Law and that looked possible as I made good progress around the back of the cottage and up the glen, stopping for a drink at the plantation of trees just before the start of the proper ascent. 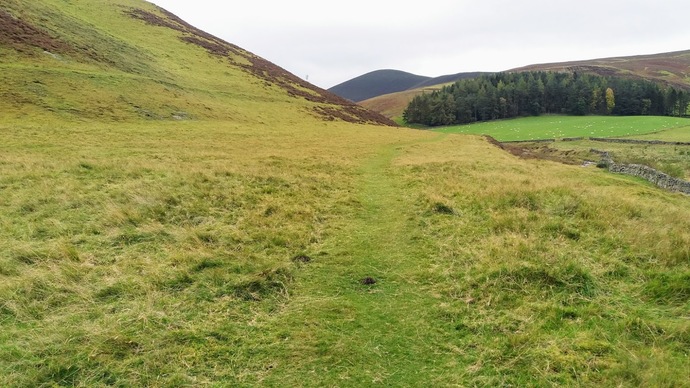 Easy going for the early stages 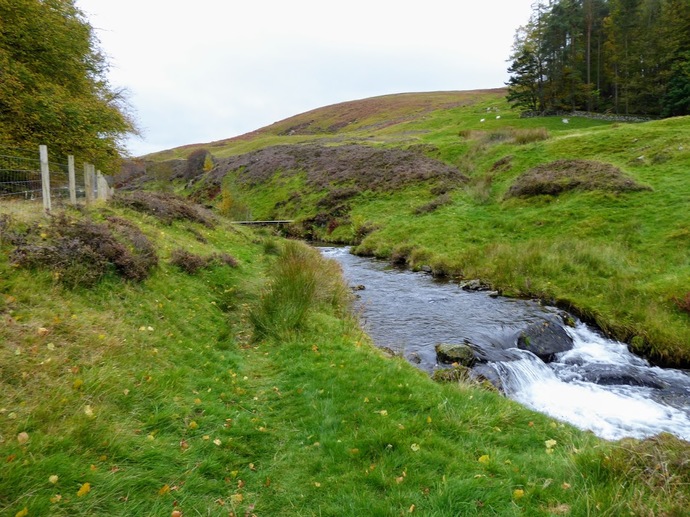 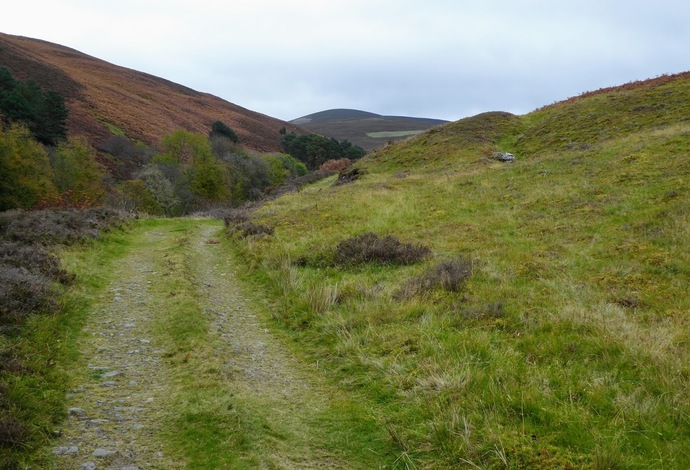 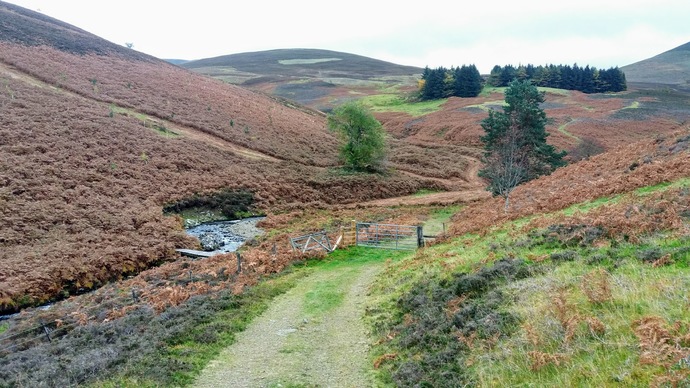 Meandering along the glen before the climb starts 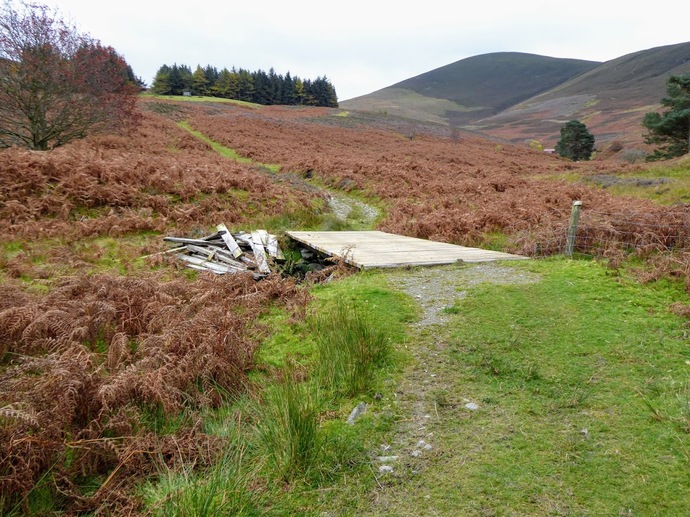 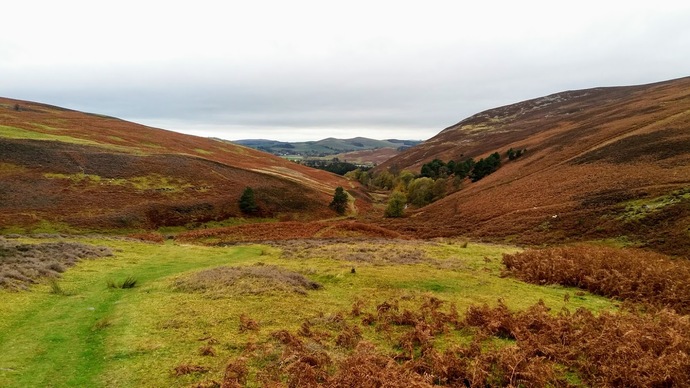 At this point I took a short detour to check out a path that I wondered might head up towards The Scrape. After a short way it didn't look promising so I cut back and over to the track leading up Dens Knowe towards Pykestone Hill. I'm fond of a tea break and a photo break, so by the time I reached the summit time was pushing on and, in any case, the cloud had dropped quickly and an out-and-back clinging to the fence to bag The Scrape didn't appeal - a good excuse to come back another day. 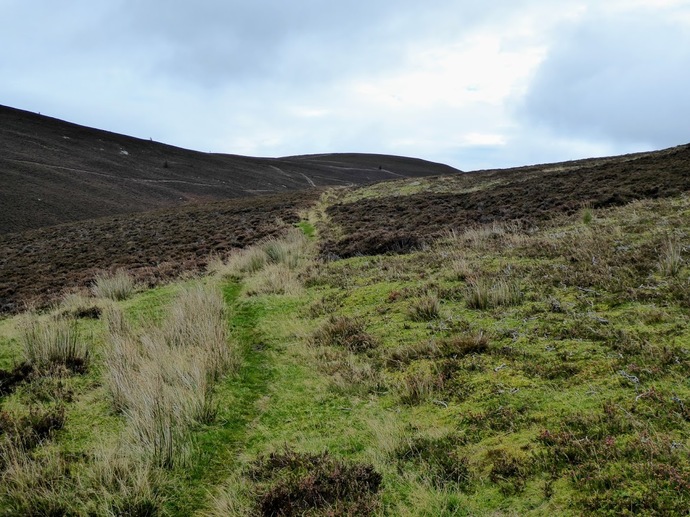 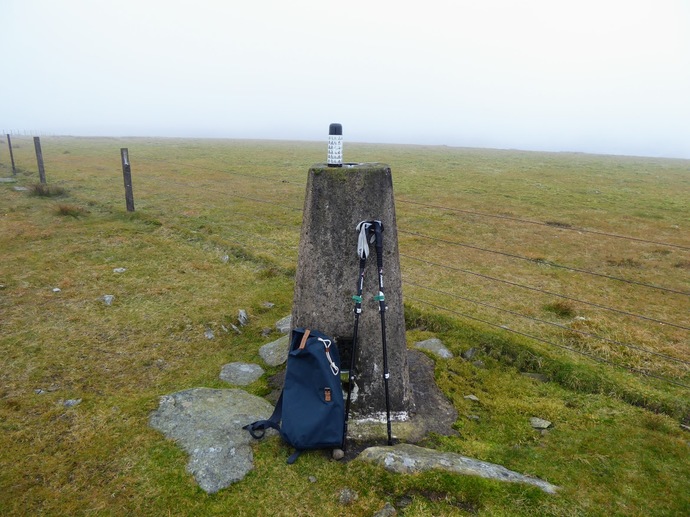 Setting off towards Grey Weather Law I came upon the only really wet ground of the day before making it to the top of Long Grain Knowe and then up along the fence again to the flat heights of Middle Hill. Reports suggest a single fence stab is the summit, but I was damned if I could find that so wandered around to any likely highest points, eventually settling on a pile of old stabs which my phone suggested was the summit and at least looked right. 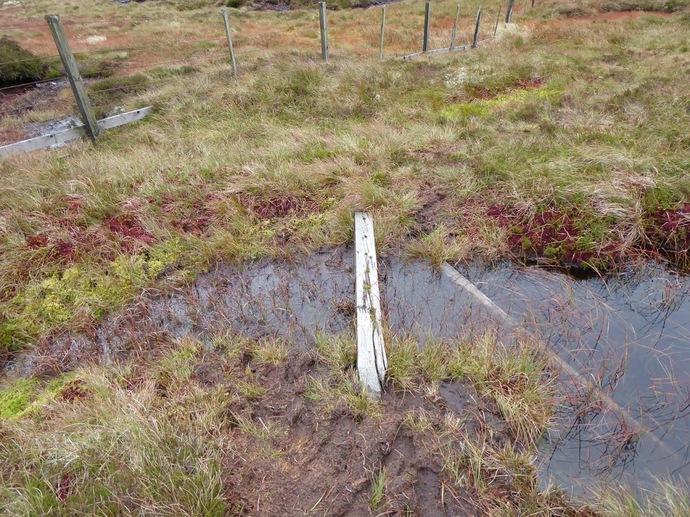 Near Grey Weather Law - there wasn't much of this today 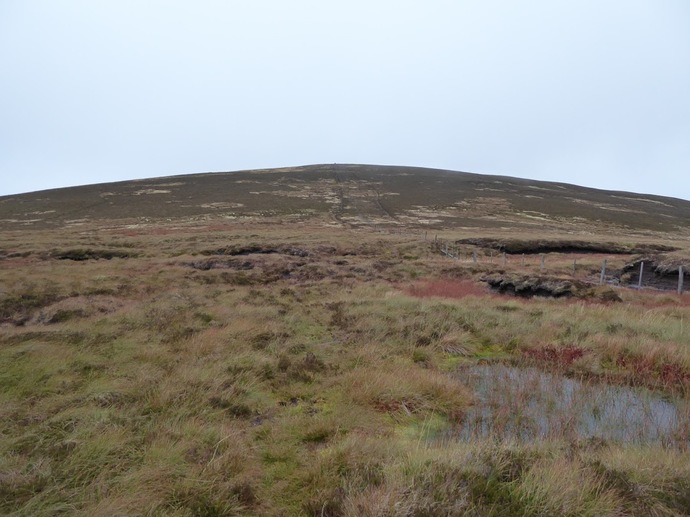 Looking back at Pykestone Hill - now clear, of course 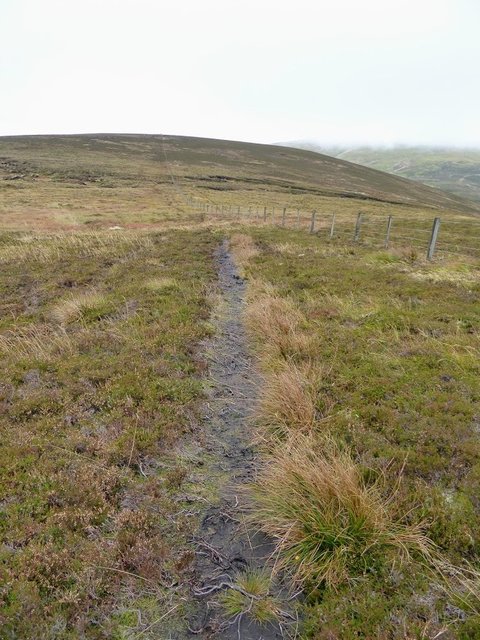 Back to Long Grain Knowe and cloudy Dollar Law 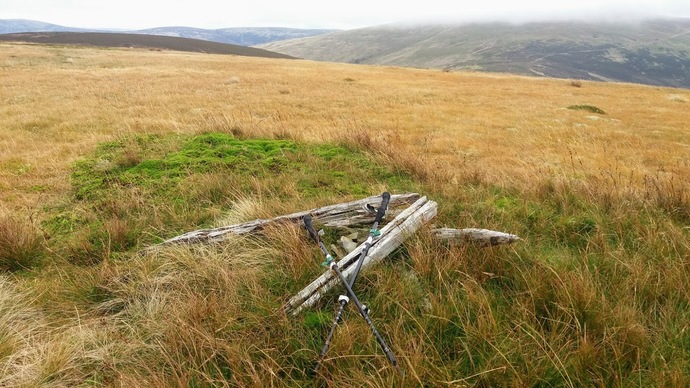 Most likely candidate for summit of Middle Hill, according to my phone

Taberon Law looks very close to Middle Hill, but I'd read it adds at least 45 minutes - make that an hour for me - and although there was a later bus, via Peebles, it would have got me back to Edinburgh later than I wanted, so that's another to be ticked another day.

From Middle Hill across to Glenstivon Dod is easy going and the cloud had lifted to allow grand views to the north, west and south at least - Dollar Law remaining cloudy all day. Passing the impressive cairn, I dropped off Glenstivon Dod, losing, then finding the track that hits the col and heads directly up Drumelzier Law.

The first cairn on the hill is the more impressive and it was partly out of what was now a chilly wind so I paused here for a late lunch and to enjoy the view back to Pykestone Hill. 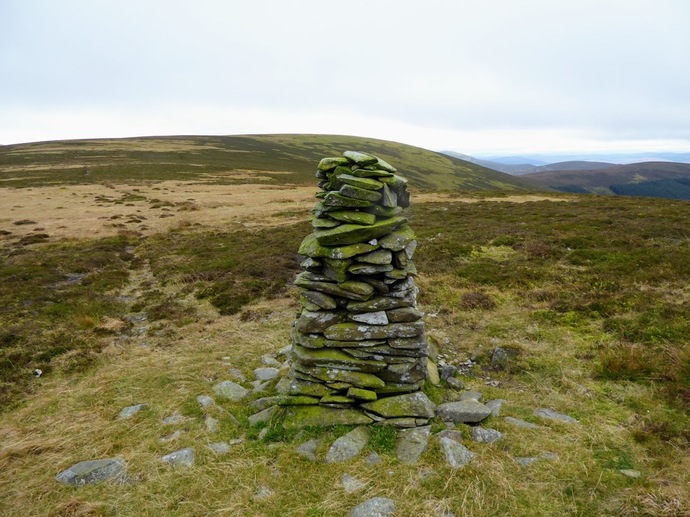 Cairn on the way to Glenstivon Dod 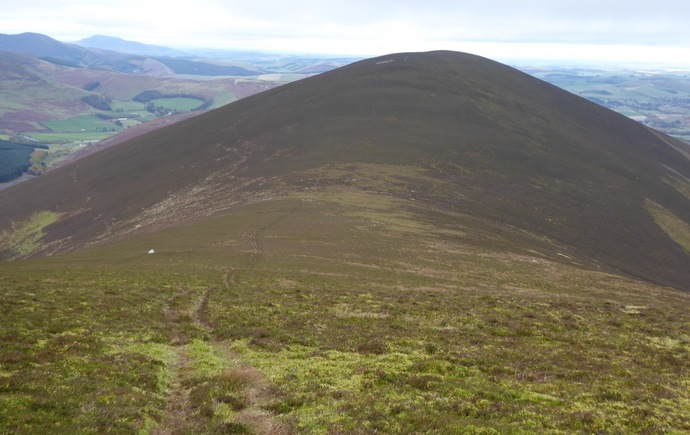 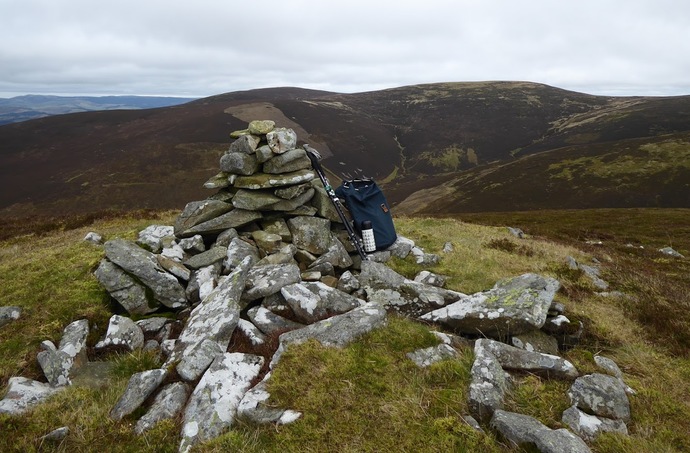 Cairn to the east of Drumelzier Law, looking over to Pykestone Hill

The views from the actual summit were just as good, although there was a cloudy haze around many of the hills. From there it's a straightforward return over Logan Head then down across short grass to pick up the track (one fence to climb), although it took a bit longer than I expected and I was back at the road with ten minutes to spare before the 4.15 back to Biggar. 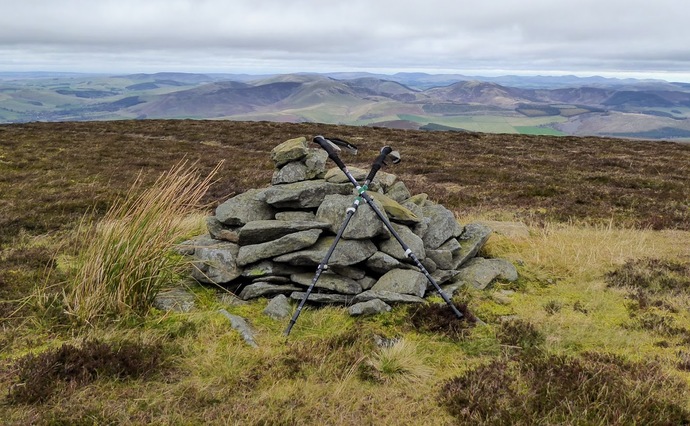 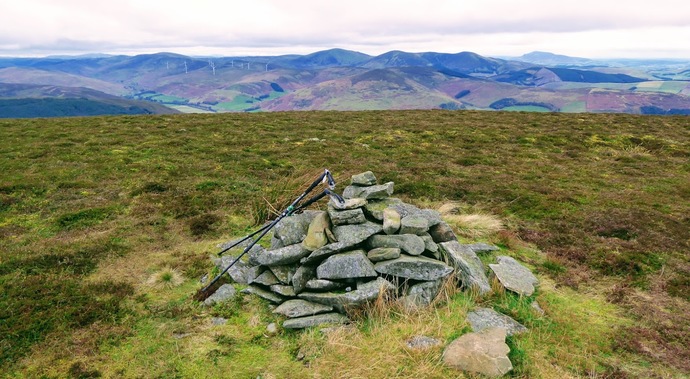 Drumelzier Law summit looking at (among others) Culter Fell and Tinto

Re: Holiday on the buses

Ah the 101! In the handful of times I've been on it it's never been more than perhaps a fifth full

The start of that walk in the glen looked really very scenic - I regret not taking that route when I went now.