Burach as a winter walk from Fort Augustus

Burach as a winter walk from Fort Augustus


Finished my run of 2 on-call shifts at Fort Augustus, so after my B&B breakfast, headed to Burach. Had a service vehicle, so my hiking plans had been limited to hills I could do without a detour on the drive home adding extra mileage, but on the day I decided to just do the walk from the B&B anyway as it was good weather and I fancied a longer walk than just going up the slightly more direct rout from the Allt na Criche forestry car park between Ft Aug and Invermoriston. 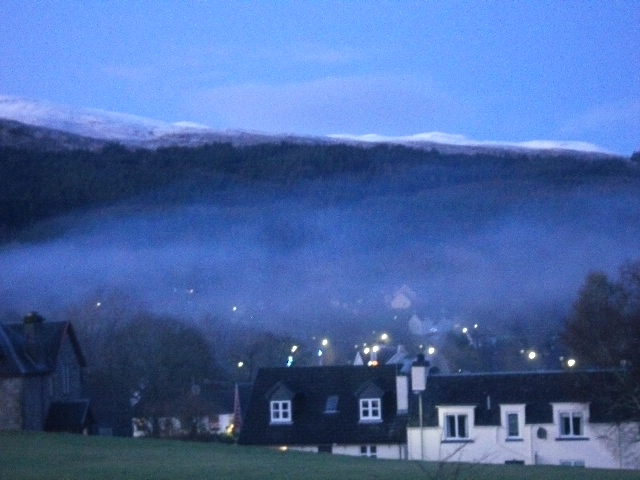 View from my bedroom window the evening before, Burach's snowy top visible

So from the Whitehouse B&B, I headed through Fort Augustus and then on to the Great Glen Way towards Invermoriston. I did the GGW in February 2018, it must just attract me in winter. It's clearly signed, so no problems getting to the split in the route where I chose the GGW High Route, the same path up beside the Allt na Criche that comes up from the forestry car park. Once out of the trees I continued along the good path, then at no point in particular, left it to head into the snowy heather. It didn't feel like the fastest ascent to the Burach summit - the first bit involved a bit of bog avoidance, then the snow got progressively deeper and it was hard work once I was at the level where it was knee deep (or even thigh deep if I dropped down in some of the gaps between heather tussocks etc). Not difficult or technical, no ridges or steep ascents, just an energy sapping slog. 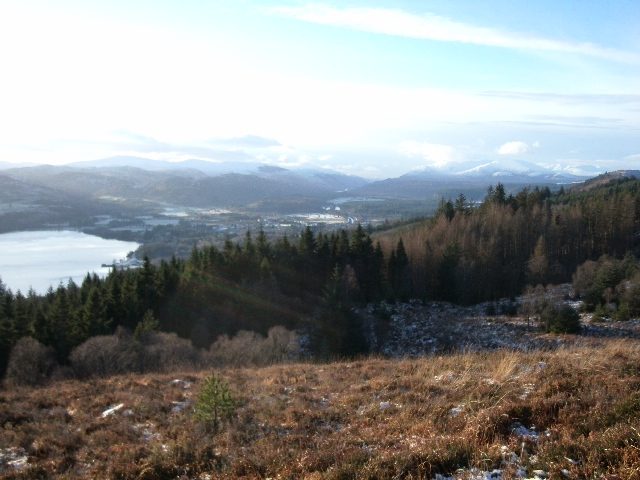 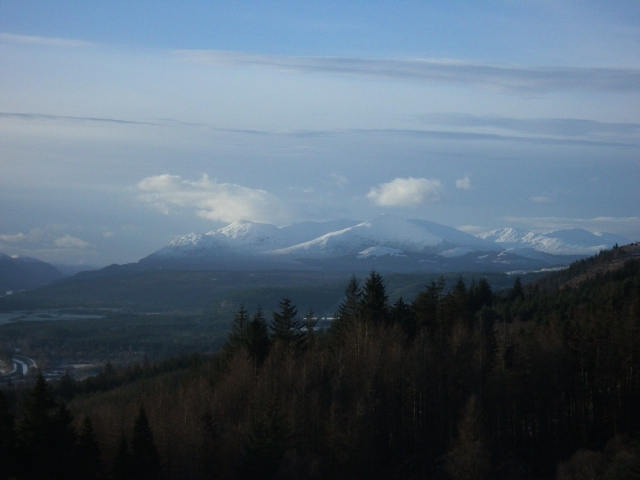 Looking down the Great Glen to Loch Lochy munros and Ben Tee I think? 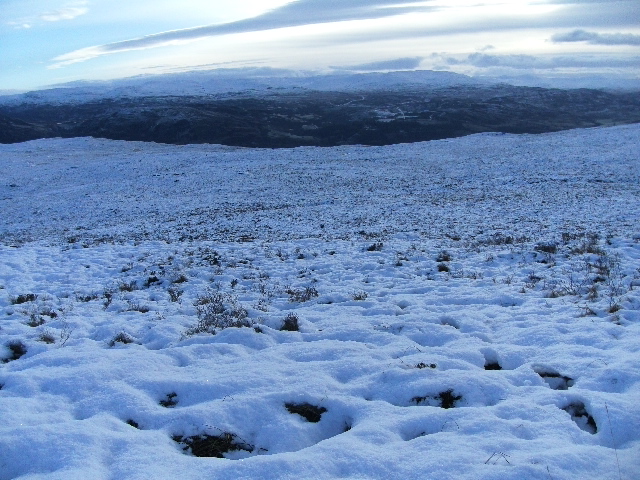 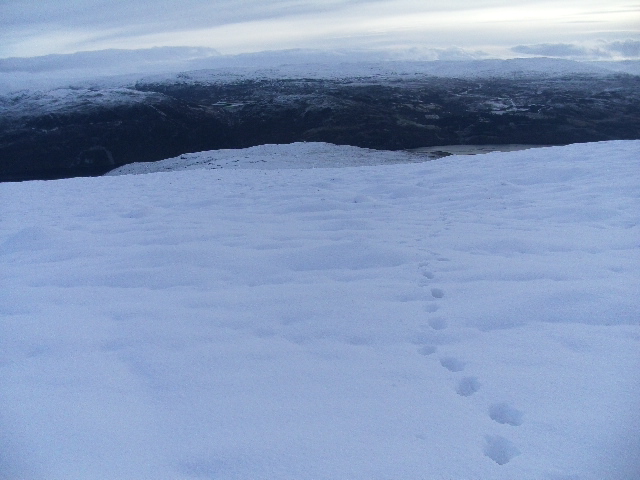 Higher up, all vegetation was under snow (last peek of Loch Ness still visible)

Nice big summit cairn to aim for, and the last 30 metres or so of ascent were just ankle deep snow and much nicer for walking in. The sun from earlier was now hidden behind clouds, but it was dry, little wind, and clouds were above the summits. No views of Loch Ness itself from the summit (get them lower down), but nice views all around, mountains everywhere looking very white. 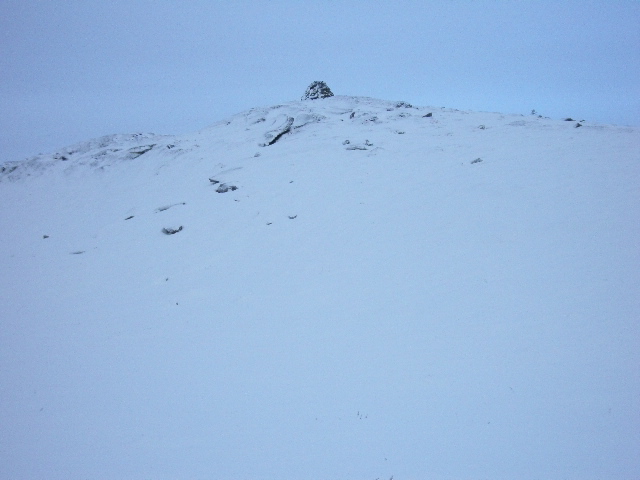 Legs were tired by this point, but this last stretch up to the cairn was nice and easy 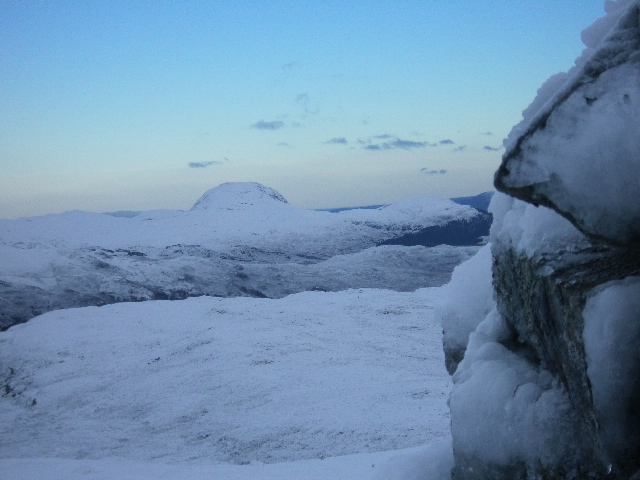 View NW to Meall Fuar-mhonaidh from the summit

Thought my descent would be super-fast running down through the snow, but it was actually too painful to do that; the snow was powdery underneath but had a hard ice top which my shins kept smacking into so I had to slow down. Shin pads would have been ideal. Still, descent much faster and easier than the ascent, I just aimed for anywhere on the GGW, and once back on that it was an easy walk all the way back to my car at Fort Augustus. 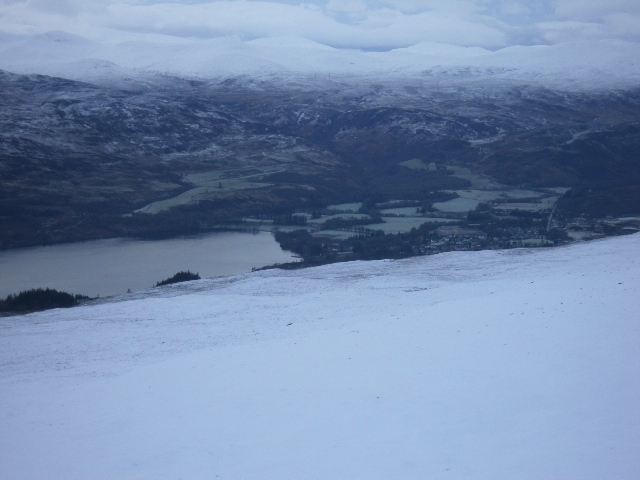 Worked out well having the service vehicle and not being able to drive further afield, Burach was ideal with its level of snow, I wouldn't really have fancied going up anything much higher today, and doing it from the village meant it was a decent length walk.