Well, it's back to the keyboard. Sometime's interest in the hills drops a little. Other times, it's the doing the walk reports. On this occasion, defo the latter, but just about ready for it now, so here is account from fairly recent trip to Kintail last month, though seems longer, just now. Start point, Glen Shiel, with Faochag and The Forcan Ridge, beyond.

Had been some wintery weather about, but window looked open for having a try at the Five Sister's. Opted for starting in Glenshiel, working round to Morvich, then hitching a lift back to car. Last time I was here, I got a lift in minutes. If all else fails, i could hopefully get a bus back up the glen. Sorted, or so I thought! Initial climb from Glen Shiel, over to Faochag and The Saddle.

Must have started off about half eight on a very chilly, but dry morning. It was certainly a bit sploshy, heading up side of wood and then I quickly lost the track and went too far along the top edge of it, so ended up making a new route up to Bealach na Lapain

I don't think that held me up much, though I did climb a bit higher than needed I took an "unconventional" route up - though not this gully :) One should be to the west (right) of this. The ridge ahead looked quite magnificent. I was only too aware it was two years to the day, since we lost our beautiful son in-law, Thomas. Combined with the magnificence of the hills, it left me feeling very emotional, as I recalled some of the milestones and detail, of our all to brief journey together. Despite being seriously ill, he even climbed the Wee Buachaille with me and my daughter. What a hero! More than a few times, I felt he was not too far away on this hike. Hills of Torridon in the distance. Back in the moment, I was soon heading along the ridge. Despite some frost, I made good progress over some of the many humps and bumps, to Sgùrr nan Spainteach, the Peak of the Spaniards, a mere 990m high. So called after the Battle of Glen Shiel, in 1719, when 300 Spanish troops fought a brave rearguard action, on the side of the defeated Jacobite rebels. The peak was apparently named in their honour, by locals. Good view over to the Forcan Ridge and Saddle. Sgurr nan Spainteach (the peak of the Spaniards) next.

Sgurr na Ciste Duibhe, looks quite imposing ahead and as i got nearer, began to wonder if I had missed the scramble, or the point where the ridge separate's, but ultimately got there. Hands were barely required on the scramble despite the icy coating on the rock. Bit of steeper climb, then I was at the big cairn on the summit, 1027m, in just under the three hours. Great views of the Kintail hills and many others, as well as Loch Duich looking calm and serene. I had great pleasure taking a photo, or two of Letterfearn, a place which holds great affection for a good ol' pal of mine, JP 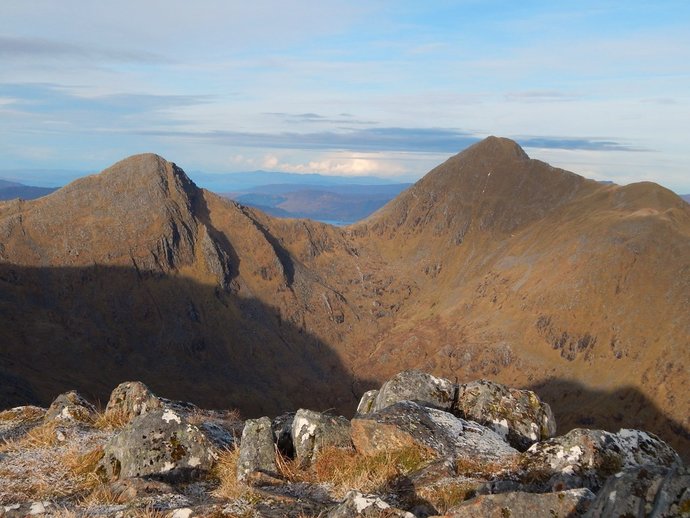 Down into Coire Domhain. Beinn Sgritheall, at the back.

The third Munro, Sgurr Fhuaran, still looks a fair way off and big climb, but next up, Sgurr na Carnach, looks less of a challenge. It only "became" a Munro in 1997 and think I was only about three quarters of an hour, till on the summit. Ah well, they all count! I continued to push on hard, not sure whether I would take in the last of the Sister's, so wanted to leave plenty time for the descent. It took just a bit longer to reach the top of Sgurr Fhuaran, 1067m, the highest top on the ridge. Again, a magnificent place to take in views of our beautiful country. Over Shiel Bridge to Loch Duich. Perhaps now, one may think the hard work has been done for the day? Only some of it! I chose to carry on along the edge of the spectacular cliffs of Sgurr nan Saighead. By now the labours of the day were beginning to catch up with me. Sgurr na Moraich began to look further away. How much longer would it take to add it in? I didn't ponder long. I wanted to be down before it was dark and not to miss that bus! After crossing Beinn Bhuidhe, I went on to the next bealach and from there followed the very clear stalker's path, as per WH's. It would be fair to say, there was the odd jog, or trot along the very considerable way Over Beinn Bhuidhe to Letterfearn, Loch Duich and Loch Alsh.

It was great looking down on the causeway over the River Croe, though still takes a bit of time till finally emerging down on the A87, at Allt a Chruinn. I was well chuffed to do it in six and three quarter hours, which would leave plenty time to hitch a lift. In fact, I could walk back to the car before the bus came, had I chosen I changed into a fresh shirt, so that anyone picking me up wouldn't think I had been sweating much. 20 minutes passed and the chill set in. Fleece on. About same time later jacket on ...... then hat and gloves on ......... then lot of hand rubbing and self embracing

Still no lift!! I must either have an invisible thumb, nobody knows this custom, or it has been outlawed

Never have I waited so long for a lift. I was thinking I would need to try get the bus to drop me off in Glen Shiel, after all. Not only that, but I'd left my wallet in my car, which would have caused multiple problems no doubt. Just when I had all but given up hope, two hours after hitting the road, a kindly couple took pity on me, picked me up and took me back to the car. Thank you lovely people. I was fair cold by then. End of the line. Six and three quarter hours to do the hike.Two hours to hitch a lift back to car!

Never mind, it had been a great day, full of emotion, but superb. This one is for you, Tommy. Loved and never forgotten. Your son is in the best of hands!

Re: The Five (-1) Sister's, a Lumpy Throat and Invisible Thu

I think that everyone who has ever lost someone they have loved and walked with feels nearer to them away from the distractions of everyday living. I know I do. Thanks.

As to the invisible thumb, I can hardly pass on a suggestion we almost took before someone stopped for us at last when we were students walking in Shropshire, "Maybe," R said, "If you were to wear your rucksack on your FRONT, underneath your jacket?"

Re: The Five (-1) Sister's, a Lumpy Throat and Invisible Thu

Sgurr wrote:I think that everyone who has ever lost someone they have loved and walked with feels nearer to them away from the distractions of everyday living. I know I do. Thanks.

As to the invisible thumb, I can hardly pass on a suggestion we almost took before someone stopped for us at last when we were students walking in Shropshire, "Maybe," R said, "If you were to wear your rucksack on your FRONT, underneath your jacket?"

Thank you, Sgurr. Yes, the mountains are a good place to go to get away from it all, but closer to one's emotions.
I am sure your rucksack trick, would be worth a try .... but, what can one do for a baldie head like mine