The Tarmachan Ridge - last day of the decade

The Tarmachan Ridge - last day of the decade


My son Jamie and I had intended to get out on the hills on January 3rd but the weather for Hogmanay looked so promising that we changed plans. We were out of the house (near Perth) by 07.40, still in complete darkness and after a quick stop in the Bridge of Earn Co-op for lunch provisions we were on our way up the A9 - target The Tarmachan Ridge.

Arriving at the Ben Lawers car park at 9.15 we rapidly revised any thoughts of being among the early starters as there must have been about 50 cars there already! Never mind, we were booted up and ready to go at 09.31 - one minute behind schedule. 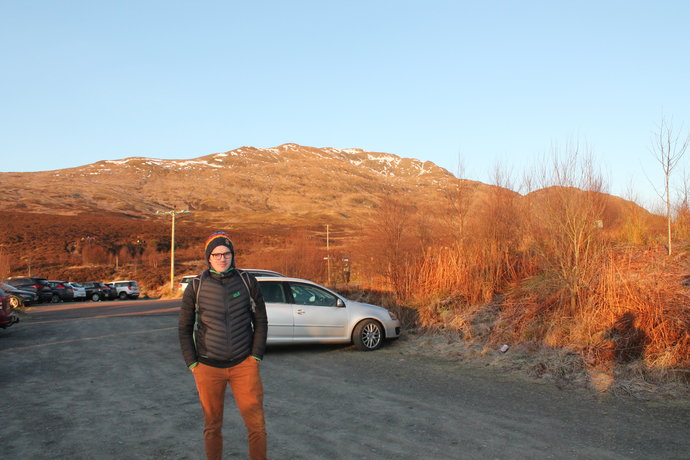 Our plan was to get to the top of Meall nan Tarmachan and take a view on conditions for the ridge. We didn't know how much snow and ice there would be and we weren't equipped for anything too serious. The weather was stunning - not a cloud to be seen, cold and frosty but very little wind.

It's a fairly easy climb to the top with an excellent path, though we had to walk on the side quite a bit as the path was very icy in places. The views got increasingly impressive and about half way up you can see the summit of Ben Lawers away off to the north east. There were a couple of hard packed snow patches to negotiate but no difficulty and we made the summit in about an hour and a half. The views from the top on this incredibly clear day were just stunning with Ben Nevis clearly visible about 40 miles to the west. View from the ridge towards Ben Nevis

Conditions seemed ideal so we decided to crack on and complete the ridge. We stopped and had a quick chat with a guy who was doing the route clockwise and said that the ridge was OK though he strongly recommended avoiding the scramble beyond Meall Garbh, which was covered in ice. This turned out to be good advice when we got there, though the path to the right is also quite tricky when icy so great care was needed as it's also very steep.

The narrowest part of the ridge, just after the summit of Meall Garbh, is magnificent - enough exposure to be serious but well short of scary.

After the tricky descent, which comes just before the final pull up to Beinn nan Eachnan (very steep in places), we stopped for lunch out of the wind with a breathtaking view north and west. After Beinn nan Eachnan it's down to the bealach and a short debate as to whether to head up to the final top (which you probably have to come back down anyway). The proposal was defeated by two votes to nil which just left the decision as to which point to leave the bealach and head downwards to find the path home. I think its fair to say that we didn't quite get this one right and ended up too far west of the disused quarry from which the track home leads. But in such excellent conditions you can't get lost so no harm done. View back up to the ridge from the path home

From the quarry it was barely an hour or so back to the car park. A fantastic day, and what a way to end the decade.

Re: The Tarmachan Ridge - last day of the decade

Nice one, a great hill and you got some cracking views. Amazing how little snow there is for the time of year.