Christmas in the NW

Christmas in the NW

Grahams included on this walk: Beinn an Eoin, Meall an Fheur Loch


I’m having a hard time finishing this entry. I’ve captured the general gist, and the statistics, but I can’t get too excited about adding much detail. It was a good week, but my overall mood was a bit…meh. Not bad, not sad, just…meh. It probably wasn’t helped much by being frustrated by short days and a few days of not-very-nice weather. I didn’t get nearly as much walking done as I’d hoped.

Sat 21 Dec
Drive to Lochinver, stopping in Perth for some last-minute food purchases, Inverness for a bit of mooch around the shops, and Ullapool for a wee wander to see the Christmas decorations built from fishing creels. Settle in. I’d thought that I might tackle Meall Doire Faid on the way up, but quickly realized that there just wasn’t enough daylight for at least 5 hours’ drive time, plus—really—any but the shortest of walks. So I just took my time getting there instead. 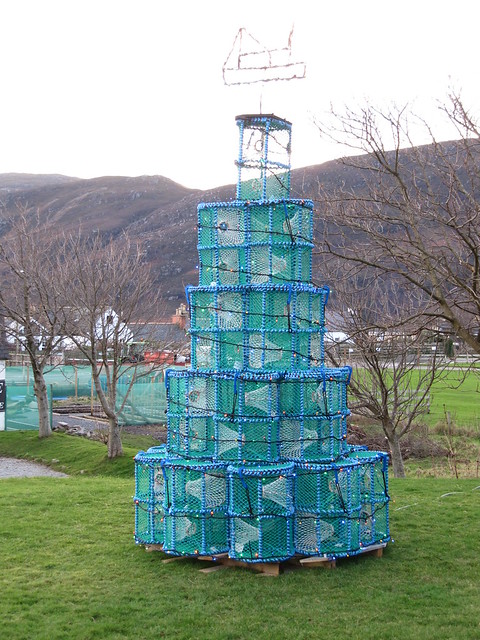 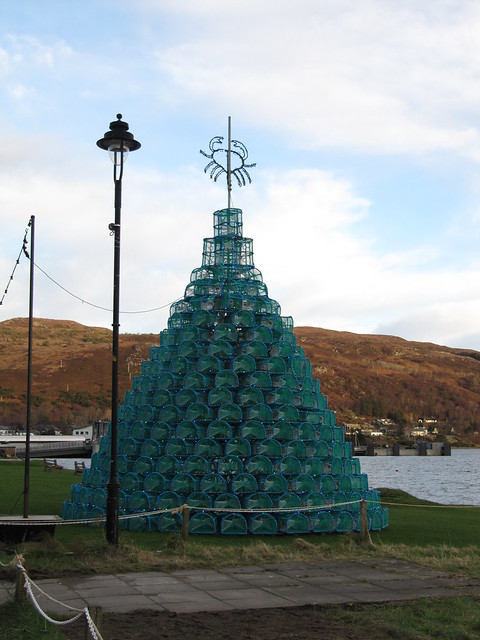 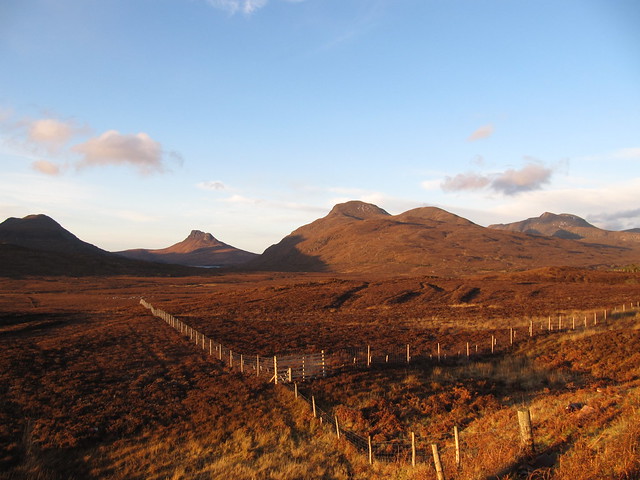 This hill is legendary for its water-filled holes. Well, as legendary as it can be for it having only about a half dozen walk reports; however, nearly every one of them mentions the holes. I thought I was doing a pretty good job of avoiding them until I started stepping and falling into them! 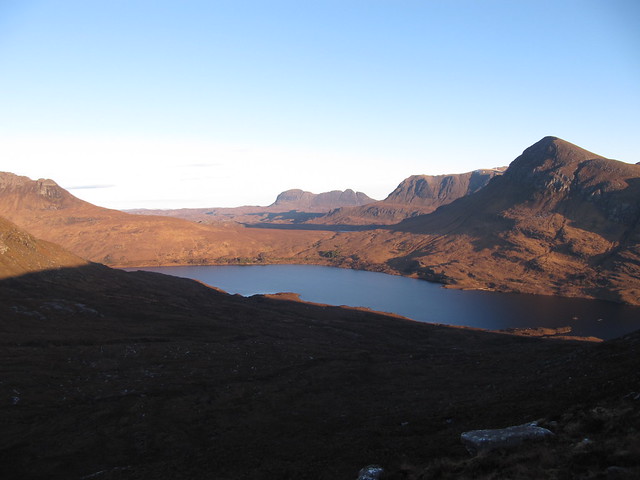 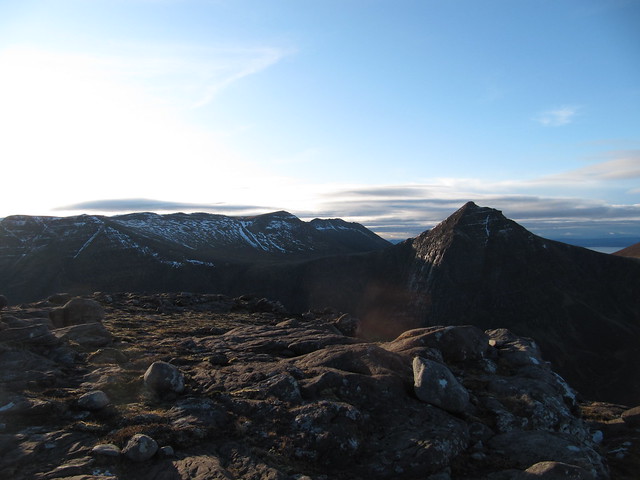 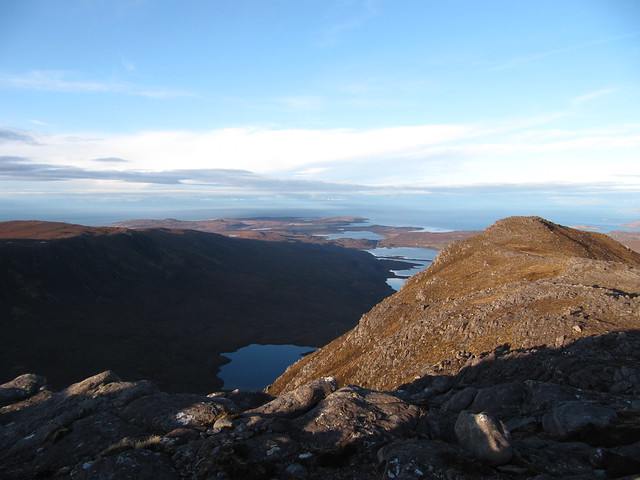 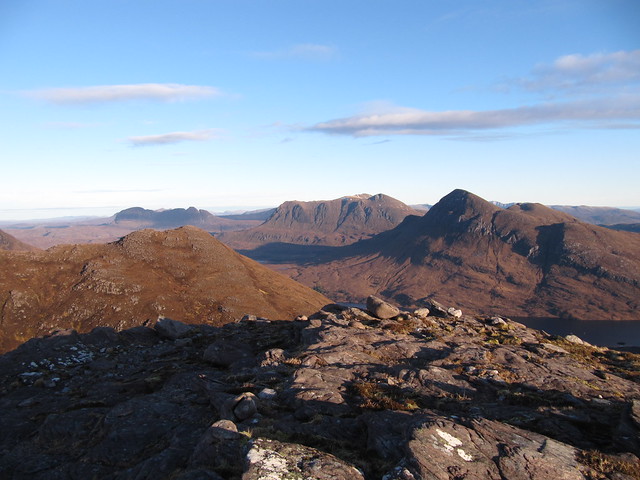 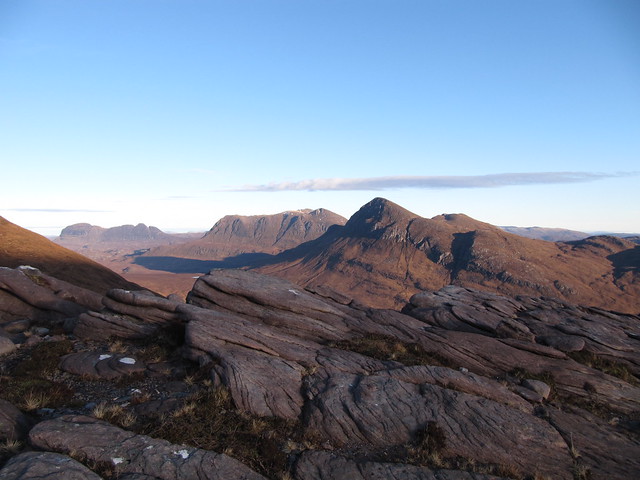 I’m also obliged to return again someday to sample the delights of Sgorr Tuath—cracks, pinnacles, and, rumour has it, as much or as little scrambling as strikes your fancy. Today, I simply didn’t have enough time to do more than climb to the high point before descending. However, the out-and-back did give me the opportunity to make my way back to the burn higher up in the hopes of finding somewhat easier ground. It was, but probably only marginally.

I was in the mood for a long-ish walk without the accompanying long-ish drive; this one fit the bill. I’d actually set out to do the Ben Strome stalker’s circuit (a route I’d done back in 2013 from the “West Sutherland” walk book I’ve had for ages), but a red disk poking out from a “culling in process” sign put paid to that. 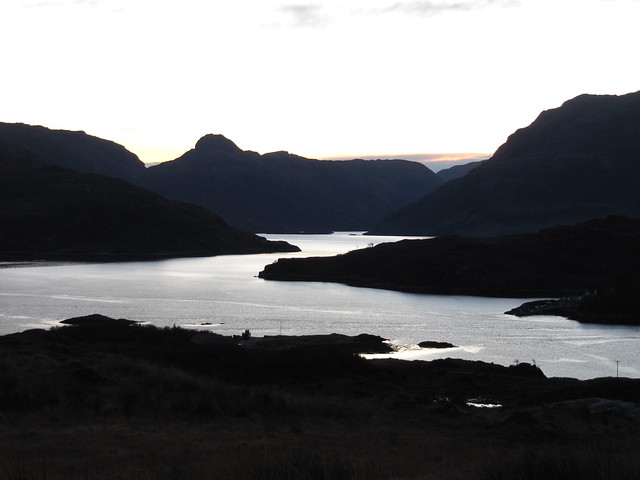 setting off; no sun yet! 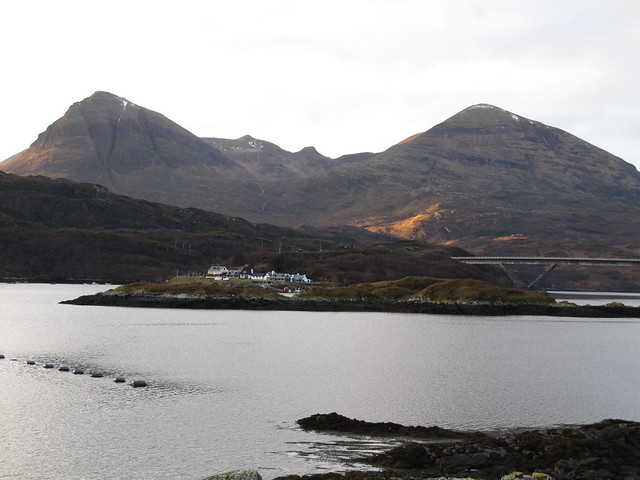 Loch Glendhu/Loch Glencoul was as still as glass, and I took many many photos of Kylesku, the bridge, and Quinag reflected in it. I also spent much of the trek along the water looking for otters, which I’ve yet to see in the wild. 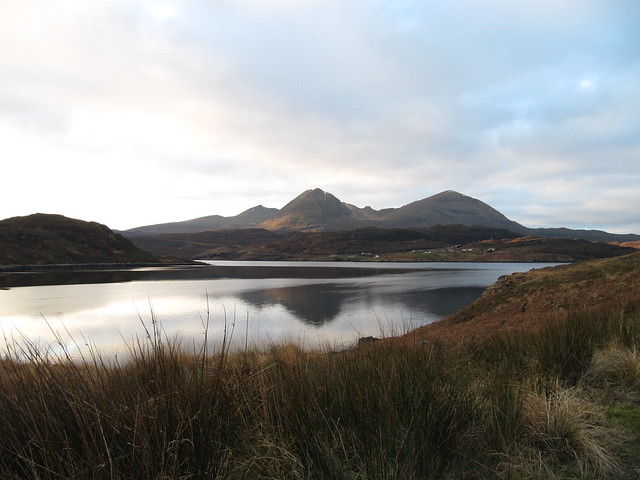 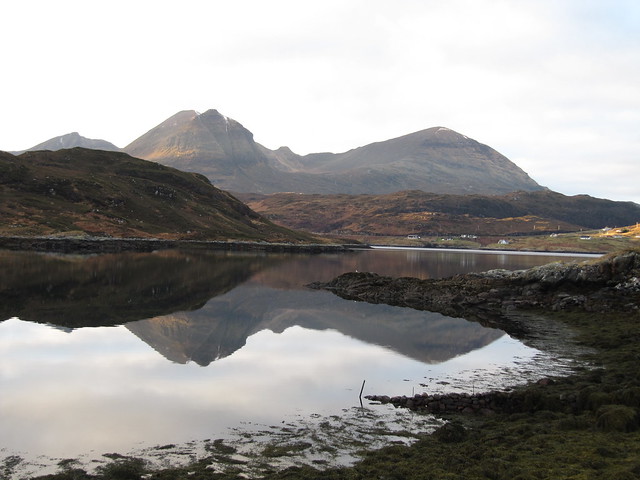 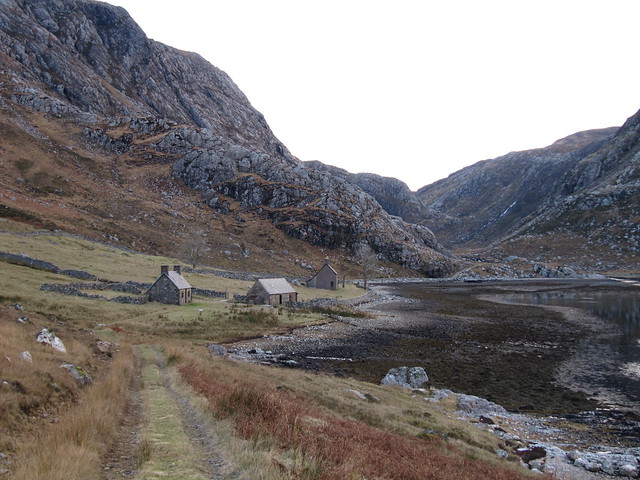 There’s a good track that carries on along past the bothy, and the idea of walking through to Beinn Leoid intrigues me. Some day, perhaps. 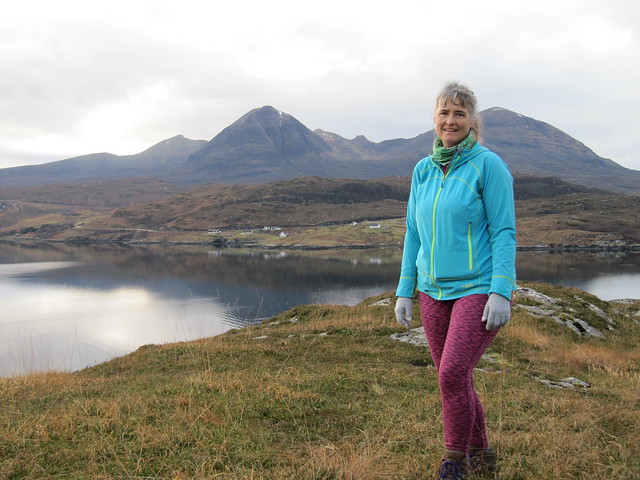 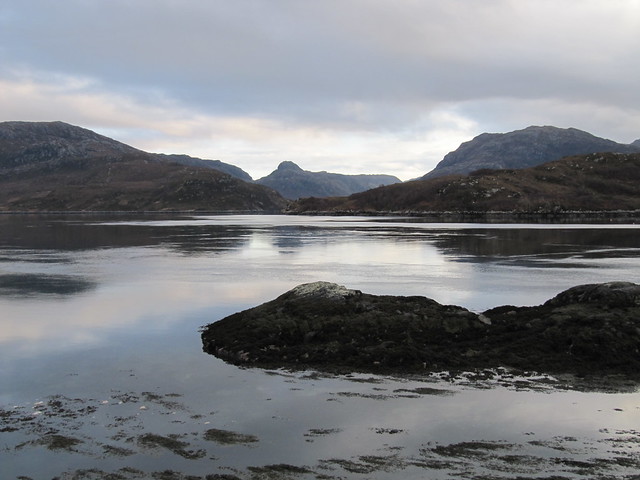 Just a little leg stretcher on a day with a mostly lousy forecast. I managed—just—to miss the rain, which started just a few minutes before I returned to the car. (Note to self: if you do this walk from Little Assynt, take the path that leads from the opposite side of the car park from the info board; it’s a loop that can be done in either direction, but doing it clockwise means doing the longer distance to link to the all-abilities path first. If you follow all that.) 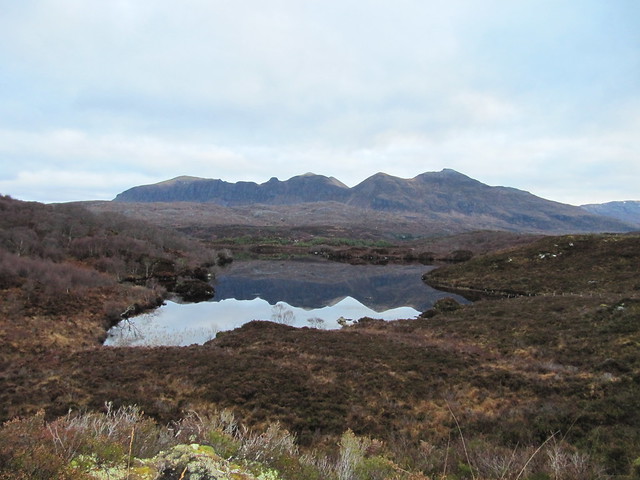 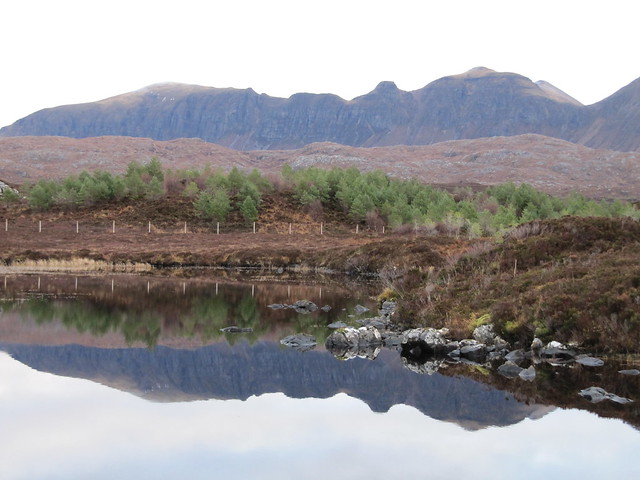 Cathel stopped by in the afternoon, and we had a good catchup.

In the evening, I was planning on walking around to a carol service at the church across the loch, but binned the plan when I realized that it was chucking it down. I wasn't in the mood to wear my waterproofs to walk to church!

I’d saved this walk—one of my all-time favourites—to do on Christmas. It’s lovely, and varied, and long enough to count for “proper exercise,” and burn off at least some of the calories yet to come. 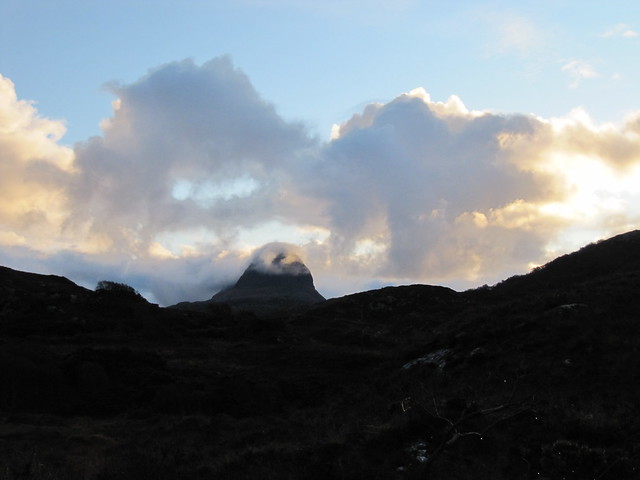 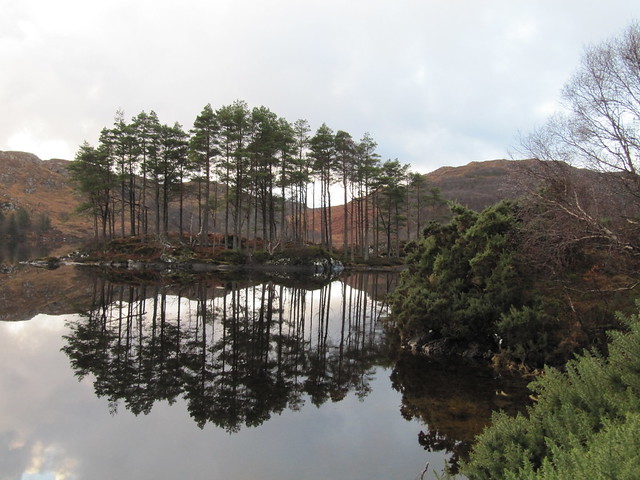 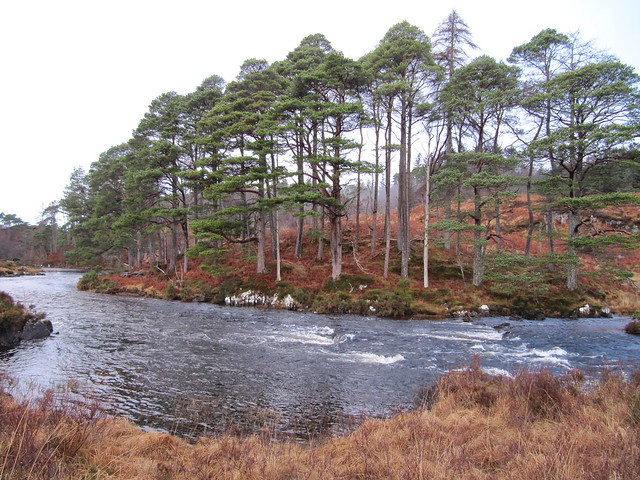 This was an awkward one that needed tidying. I’d missed out this wee hill when I’d done Beinn Leoid (C) and Meallan a’Chuail a while back. What made it awkward was that it wasnae going to take long, but it’s pretty far from anywhere. So it made a decent choice for a “there’s not much daylight to play with” day. It was going to be almost as much about trying to enjoy the drive as it was climbing the hill. I was hoping—for naught, it transpired—for a bit of a view of the area, something I’d not had during my previous visit.

It was all eerily familiar, as the mist that had been swirling around the Corbett tops across the road morphed and expanded to encompass my hill as well. There’s a good stalkers path that zigzags up to about 500m, and then you’re on your own (regardless of which hill you’re heading toward) across mostly featureless terrain, interrupted only by peat hags.
It wasn’t very far to my summit—only a bit more than 100m, and about a km distance. But the sodden ground and lack of visibility made it arduous. I was relieved to reach the cairn, but annoyed that there wasn’t anything to stick around for. I more or less retraced my steps back to the stalkers path, and back down to the car. 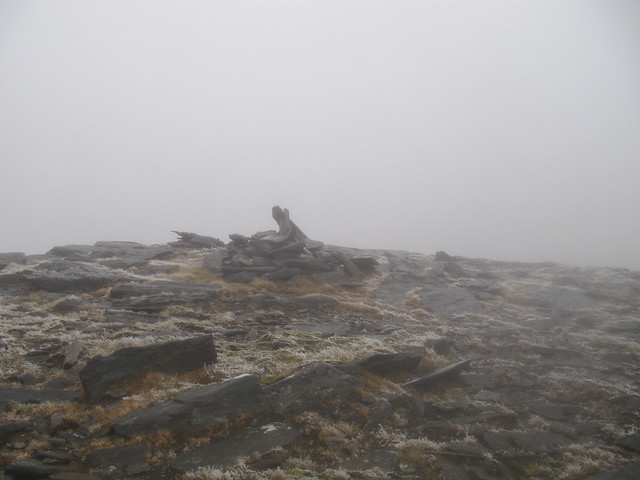