New Year's Eve was an exceptionally fine day for a winter walk and too good to miss. There was bright sunshine all day in Glen Eagles with almost no wind and most wind turbines static. The temperature climbed (slightly) above freezing as I accompanied Jaywizz on another section of her skyline trek along the Ochils. This day was to collect a gap in her list of summits to the west of Steele's Knowe - Carlownie Hill.

We started from the layby on the A823 opposite the road to the Glendevon Reservoirs. The adjacent field had no sheep visible in it as we climbed the fence and headed uphill next to the trees. Once over the field a series of tracks, ATV scars and tussocky ground took us to gates at a junction of fences east of The Seat. We took an ATV track heading north to find that it split a short distance later. We took the right hand one that looked as if would take us more directly to Carlownie. Big mistake - it lured us on then faded away. From there it was a case of linking together one sheep track to another with plenty of tussocks and heather in-between to provide variety and slow us down. Eventually we reached the wall that runs from Eastbow Hill towards Steele's Knowe. This had a reasonable track running beside it and was reinforced with a modern fence running along in parallel. Expecting to have to climb it we were glad to find that it suddenly ended leaving us just the wall with its lower fence to clamber over onto the last few hundred metres to Carlownie Hill's cairnless summit. 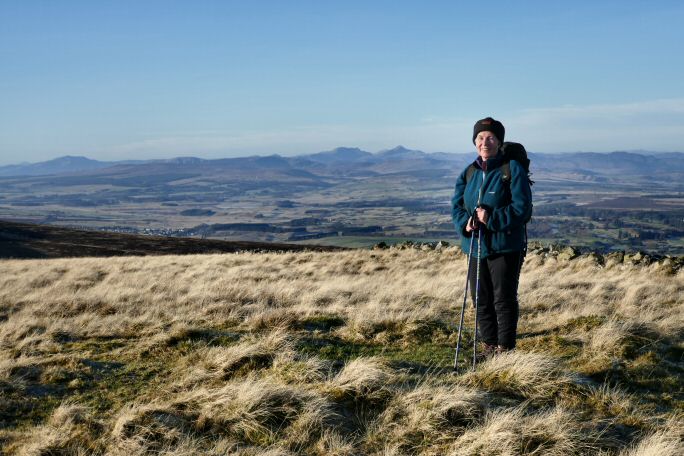 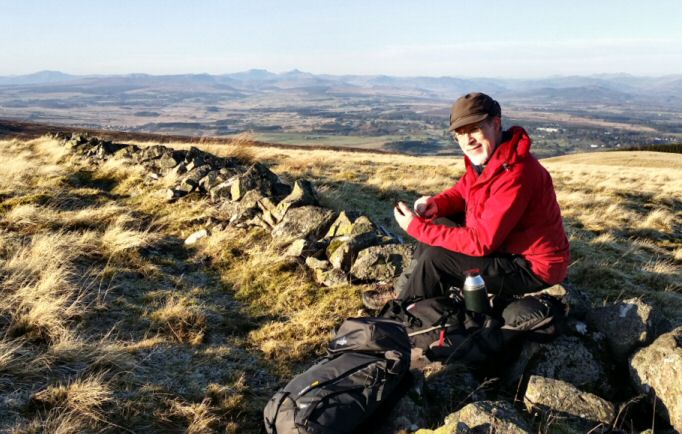 Another tumbledown wall a few metres further provided seating for us as we dug out flasks of coffee and calories to refresh ourselves after almost two and a half hours spent on just 4.5km and 270m of ascent. It felt much more. With energy levels rising and photos taken we decided a better routs back had to be along to Eastbow Hill and then down the ridge. Jaywizz had been there recently and knew there were ATV tracks there. I hadn't, but had intended to return that way anyway. Once back over the wall the track continued for a while before turning into a narrower path that led to the trig point on Eastbow Hill. There wasn't an obvious track from the trig point, but we soon found one not far to the south. 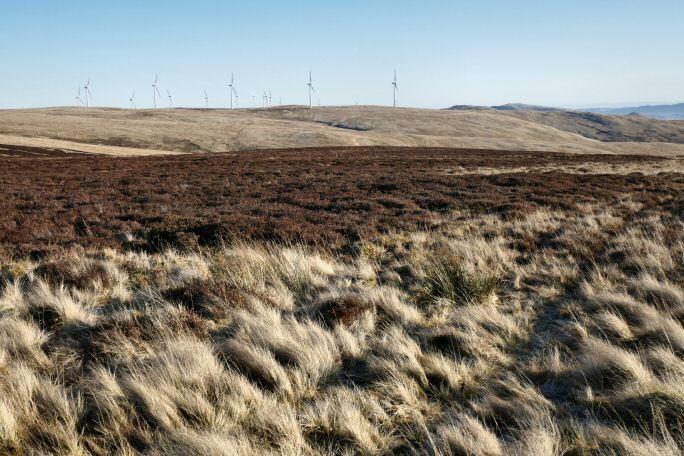 The Steele's Knowe turbines from the track down Eastbow Hill

With a diversion to visit the two cairns on East Craigs's twin tops we ended up on the track that proved to be the left hand branch of the junction where we'd headed right on our way up. 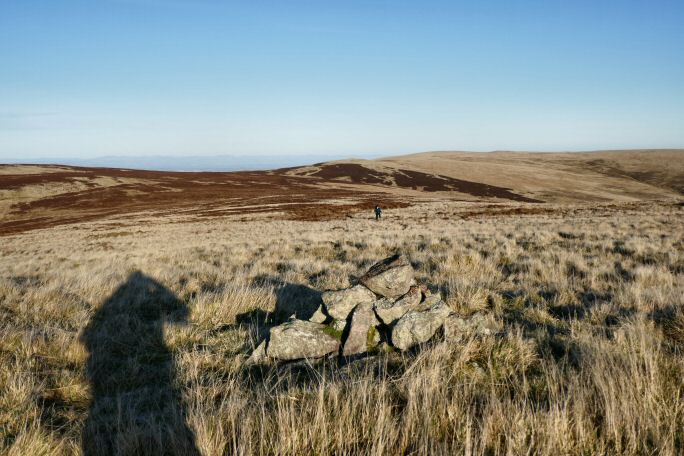 Selfie shadow plus Jaywizz with Carlownie in distance from the northern East Craigs top. 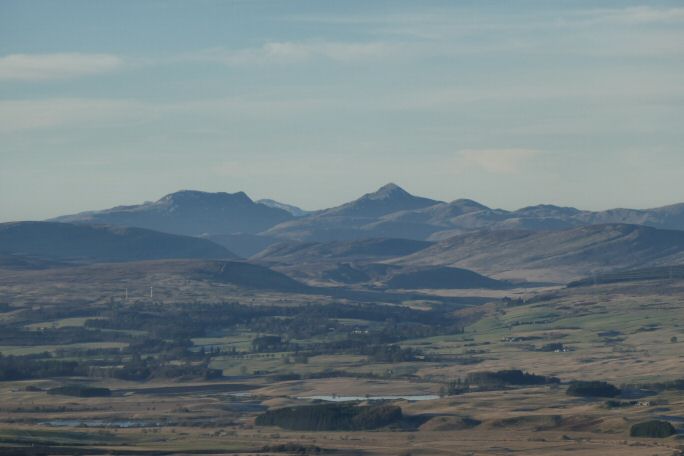 Zoomed view of an almost snowfree Vorlich and Stuc a'Chroin

Back at the fences I followed the one going south, hung my rucksack on it, and climbed to the top of The Law - all remaining 25 metres of it. Meanwhile, Jaywizz continued back down towards the road having collected that mighty peak on her previous visit. When I caught her up we descended to within a few metres of the farm before headed west above the field we'd crossed earlier. As we neared it a flock of sheep came running towards us only to reverse direction a short time later and disappear back to the west. Nearing that end of the field we debated whether to continue further and finish through the wood to avoid disturbing the sheep. They didn't need to be disturbed because while we were still some distance away they all came pelting back past us once again. With not a ewe in sight we quickly crossed the field to see a pickup and trailer at the far end of the field possibly accounting for the excited flock who had possibly just been freed into the field and were familiarising themselves with their new premises.

Thus ended a very fine day which resulted in adding precisely one Tump (The Law) to my walk statistics. The other tops don't qualify, though East Craigs was once thought to be a Tump.