A fine day for Cairnkinna and Fell Hills

A fine day for Cairnkinna and Fell Hills


After a week of depressing weather, Wednesday's forecast looked hopeful for Galloway. The Met Office predicted a 5% probability of precipitation most of the day for Moniaive, with some sun thrown in for good measure. Decision made, some essential pre-walk reading of reports by Fife Flyer and Inca then followed before bed.

A 7:30am start from just west of Edinburgh was slow at first as I navigated though the morning rush hour, then speeded up as I headed away from rather than around the town. Driving along the M74 then A702 I met a couple of heavy showers on my way to the Dalveen Pass, but from then on it was dry as I hit the single track roads leading from Penpont to objective one.

I parked in the disused quarry 500m after passing Chanlockfoot - NS 78697 00508. Plenty of room for several cars there. The first hundred metres of the walk are the most difficult. There's a strip of felled forest with new plantings interspersed with brashings and liberally endowed with brambles up to a fence topped with barbed wire. I started up the eastern side of the quarry where a groove/ditch? led up easily at first then the brashings and brambles increased. Once over them I reached the barbed wire fence and managed, with some faffing around, to climb over it without damage to either me, my clothing or the fence. I discovered on my return that the boundary turned into a dry stone dyke just 50m to the SE with an inviting gap through it. From there a rising traverse met a flock of sheep that headed up-valley away from me. There was another flock beyond another barbed wire topped fence running up the hill, so I zigzagged up the steepening slopes to reach the fence junction shown on the 1:25,000 OS map. There were gates there so no crossing problems. 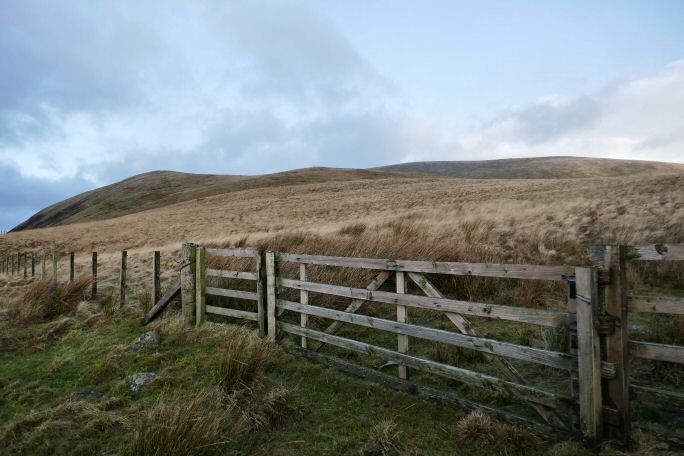 An ATV track ran from there almost continously to the trig point and the nearby massive cairn. The ATV track running towards the summit

This had a hollow on its northern side which gave shelter from the wind - and sun - for my 11am snack. 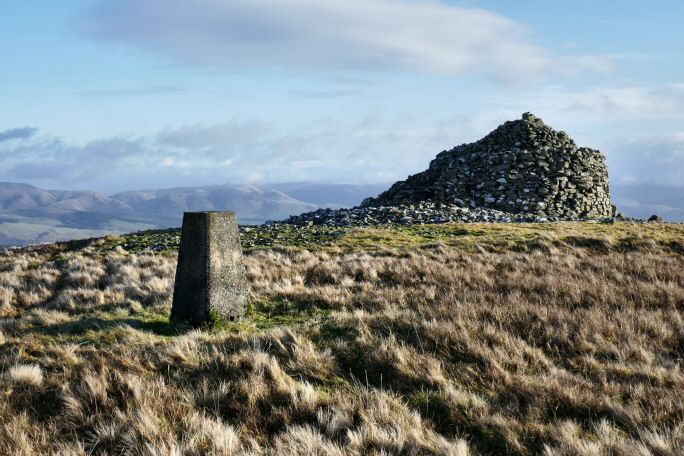 On my way up the ridge I had noticed a dark cloud to the south and heading my way, so when I felt a few raindrops I stopped to pull on my overtrousers. The sun then appeared and I never felt another drop all day. There was quite a cold wind so the extra layer on my legs was useful and I kept them on. I even used my gloves for a while! On the descent I deviated onto another track where there had been a gap on the way up, but to no advantage.

Back at the car I demolished a cheese, pork and pickle pie with some coffee before heading to and through Moniaive to objective number two.

Parking was at the start of the forest track from the minor road west of Loch Urr - NS 75030 84350. Its recent(?) upgrading was for forestry and it has nothing to do with the wind farm that has appeared on and beyond Fell Hill. All access for that is from the west. Not far along the track I crossed a cattle grid and shortly afterwards met the cattle at their feeding station. 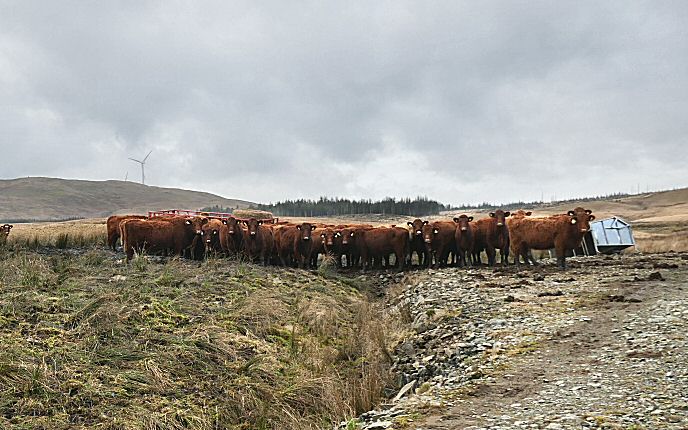 Disinterested herd with Fell Hill on the left

They looked incuriously at me as I walked past and hardly moved. When I returned they appeared to have been served their supper. There were several blue tubs of feed that hadn't been there earlier. 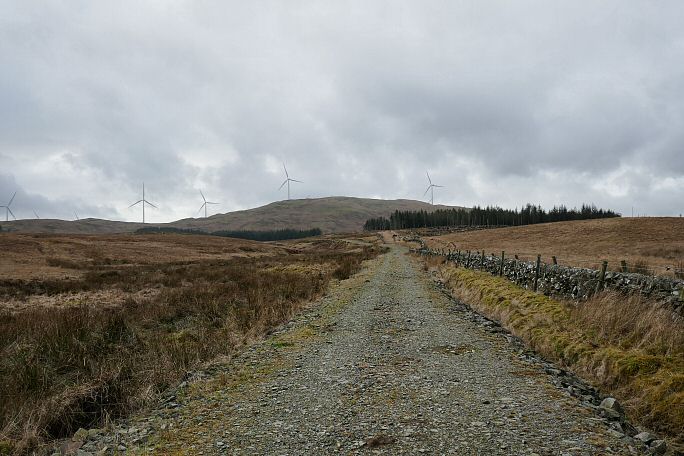 Forest track with Fell hill in the distance 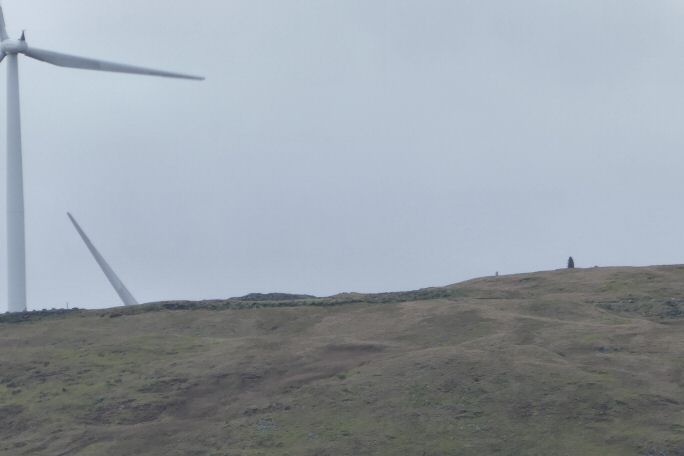 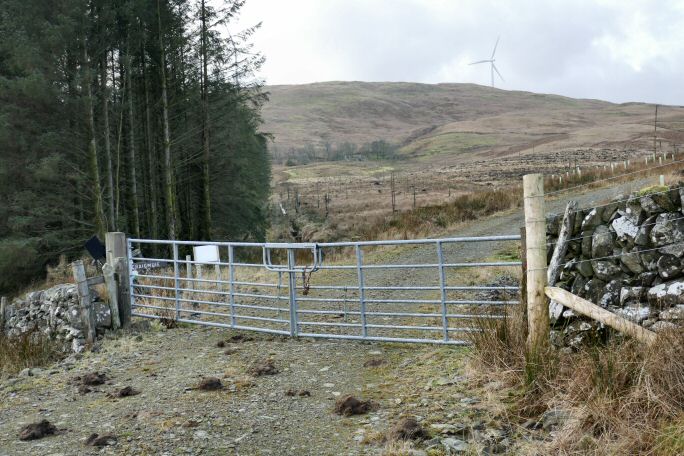 Leave the track after passing the gate Disused track beside the trees to Fall

Here it was possible to squeeze past one of the gateposts and then walk along the old overgrown track beside the trees, through another gate and up to the Fell ruins. 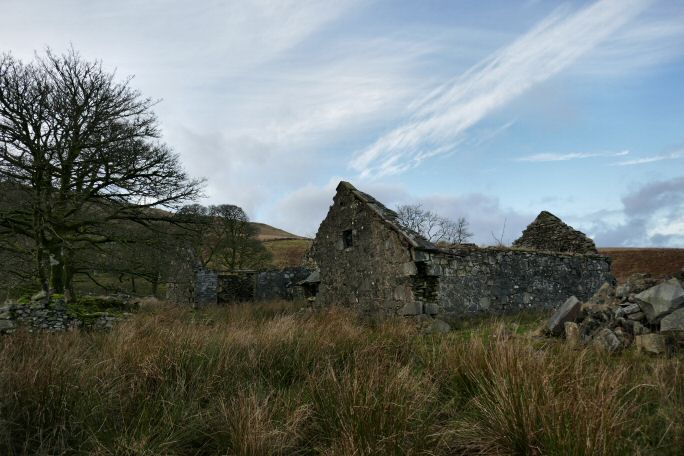 The ruins of Fell

The area in front of the ruins had the deepest mud I found all day. On the way back I walked along the back which slopes down towards the stream and is therefore drier. 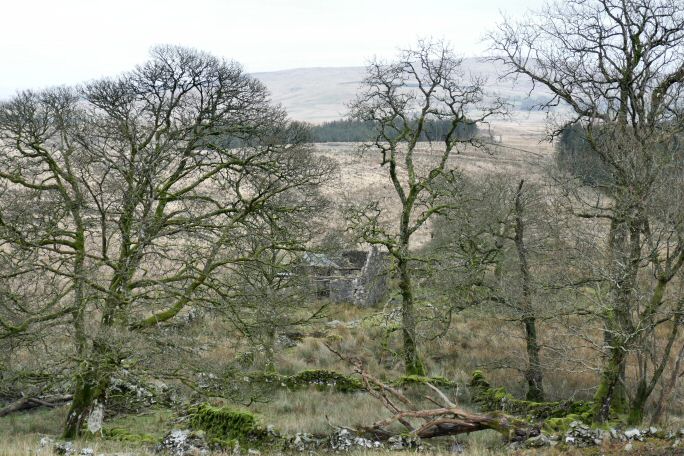 Looking back at the ruins

Once past the ruins a steep climb up to a wind farm access road was liberally punctured with cow prints and anointed with cow pats. From there the tall square section cairn was visible with several 'steps' protruding from its side. 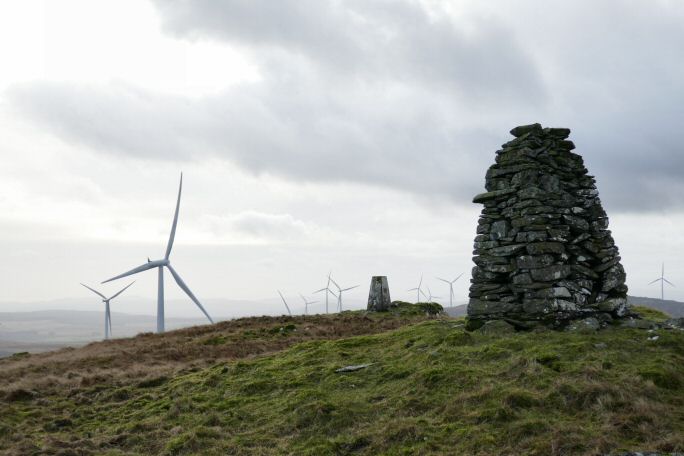 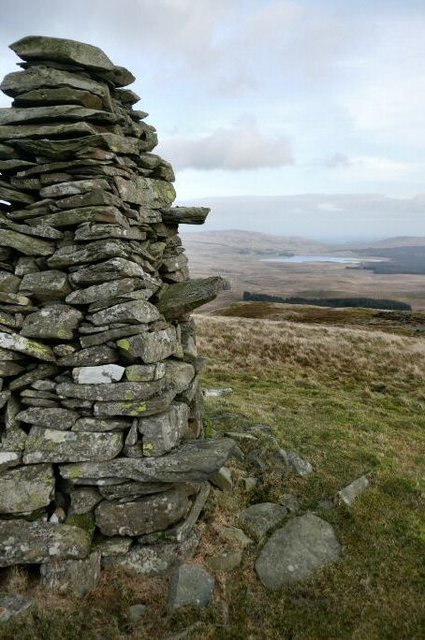 View from cairn over Loch Urr of a hazy Ben Bogrie

I wasn't tempted to test their stability and climb it. I suppose it does provide a good viewpoint for the wind farm. and on a clear day the shapes barely visible in the distance could be Lamachan Hill and its neighbours. 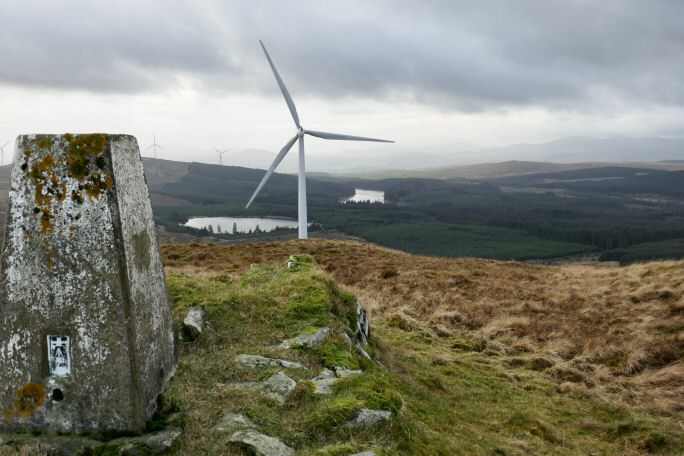 I only stopped a few minutes for photographs then reversed my route back to the car for more coffee. Then followed a two and a half hour drive back home to arrive in time for the evening rush hour and another heavy shower.

Altogether a successful day with both objectives achieved and full marks to the Met Office. I'm beginning to have a lot more faith in their forecasts!

Some additional information from Google Maps - the aerial view showing part of the wind farm, its roads, and the depleted forest with its tracks.