Sub 2000' hills included on this walk: Hill of Nigg


The forecast for the east coast of the Highlands north of Inverness was amazingly good for this day, considering the wet, windy weather everywhere else. The ground everywhere was still going to be sodden given recent rain, but after a quick scan of WH and my OS map, I decided I could do a nice walk around Nigg and North Sutor going on paths through fields, with the fall back option of mainly sticking to minor roads if it was all too muddy - plus Hill of Nigg was a sub2k summit to tick off, always nice to bag another summit even if it is a wee 'un, but I'd be doing it from sea level to give an extra bit of ascent

I parked at Nigg Ferry in the rough parking area (the little 2 car ferry over to Cromarty only runs in Summer), headed back up the road a short distance and turned right along the minor road. I was tempted to stick to the road as it looked a nice, steep, fast way up, but I wasn't in a rush and it was my first time here, so I took the grassy detours - first through the links, then back on the road as it started to climb, then taking the signed 'Castlecraig circular' path across the field. Nice (well, maybe not to everyone) views back to the assorted rigs in the Cromarty Firth. 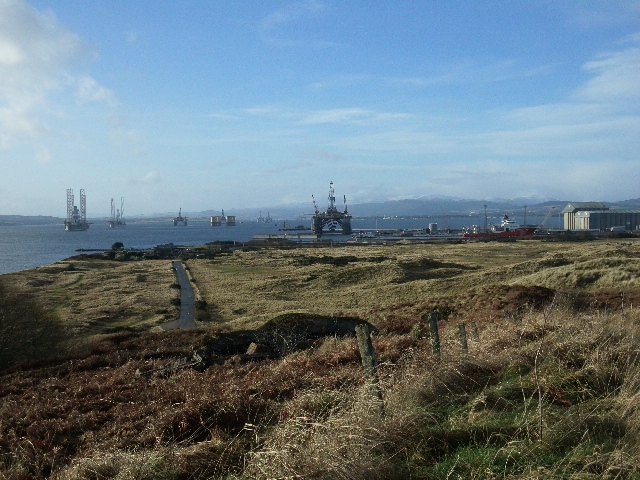 Looking back down to Nigg Ferry and the Cromarty Firth The path got pretty muddy where it had been churned up by sheep and cows, but probably no muddier than anywhere else after the wet start to the year. As the route climbed up North Sutor, it came to the remains of old WW2 buildings guarding the entrance to the Firth, so I had a bit of a wander around there. Many of the buildings are ruins, but the lookout / gun ramparts are still standing. 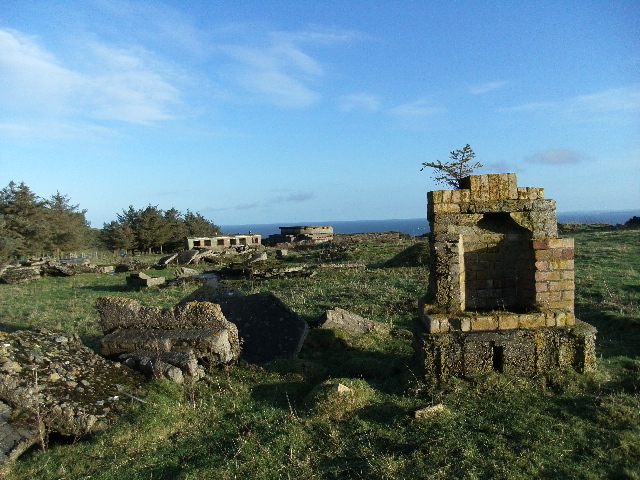 Waymark sign for the Castlecraig Circular route which I followed initially., looking back up to the lookout post watching over the entrance to the Firth

Leaving there, I passed through another gate following the signed route, though was then leaving the circular route of WH's "North Sutor, Nigg" walk as I was heading off to Hill of Nigg rather than doing the shorter circular through Castlecraig back down to Nigg Ferry. I walked up the field to its far corner and came out at a farm, which then took me out onto the single track road heading north east. Hill of Nigg was pretty much ahead of me as I walked along the road - it's not a grand summit by any means, just the highest point of rolling fields really.

After a couple of bends in the road, a track leaves the road to head up to a barn, and that's the way I headed up. At the barn, I climbed over the gate, continued up the track, and a few metres off it to the left headed to the summit. A small pile of stones nominally marks the approximate high point, but it's not a summit to set the heart racing with any feeling of great summiting achievement! Looking at my map, I pondered the possibility of heading directly north to Bayfield Loch, but was put off by the prospect of clambering over the barbed wire fences of the local fields.....so I returned back down the track to the road. (If anyone is intent on bagging marilyns and not fussed about extending the walk, this must be one of the quickest and easiest summits to get to from leaving the car if you parked at the entrance to the field. Even at a gentle pace, you could be up and down in under 30 minutes). 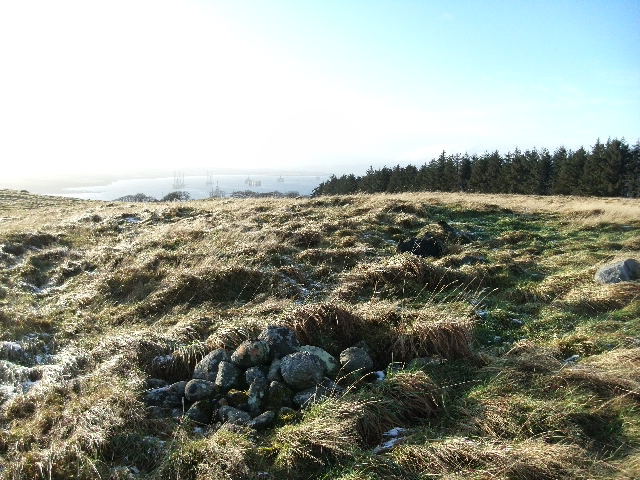 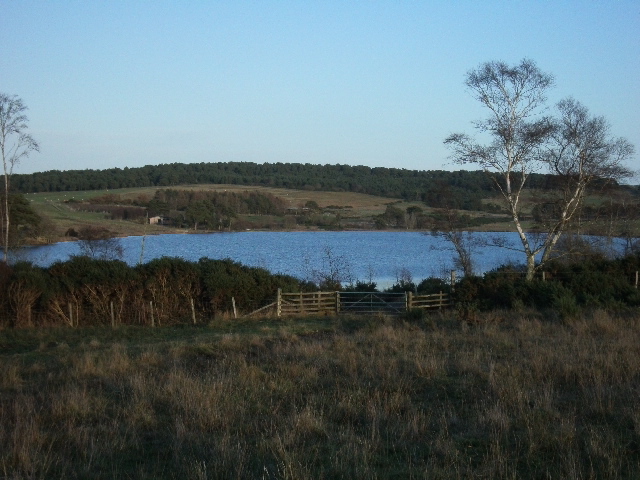 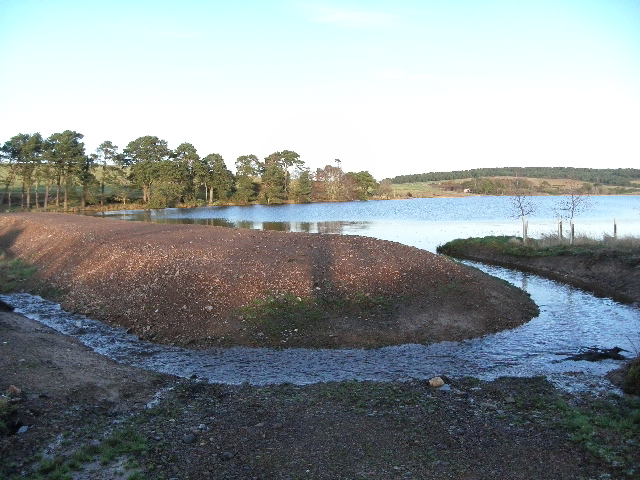 New-looking embankment at west end of the loch

I thought about heading back the same way to the road, but again I looked at the map and decided I would extend my circular route. Jumped over the outlet of the loch onto the embankment, along to another gate to climb, through another field, then decided that, rather than follow on around the loch to where a track was shown on the map, I'd go diagonally over the hill and meet the track further down. This wasn't a success, as (after another field, another gate etc) I came to a new section of tree plantation not shown on my map. It was only small, and as this was the first non-barbed wire fence on the walk, it was easy to climb across into the plantation. Unfortunately trees had not been planted in every big hole dug by the excavator, and it was a horrible terrain of deep water filled holes covered by vegetation. After 2 tentative steps, I chickened out from the prospect of a cold, knee-deep-in-freezing-muddy-water, stotter through the young trees, and just headed back to the loch the way I'd come - I could have joined the track further back, but the sun was getting low and I didn't want to be walking along the roads in the dark if I took the longer route. Another fence. another gate, but clear blue skies looking north, just a shame about the new plantation I came to a few minutes later

So back down through the woods and to the road, and down the road to Nigg village. A wee wander there, and then continued my walk, south along the single track road. When the road did a sharp right, I continued straight on through the gateposts, down an avenue. The large house at the end didn't have a sign saying private grounds, but it also didn't look totally inviting to people wandering in, so I took a detour around the houses at Pitcalzean Mains trying to find the track marked on the OS map, and inevitably found myself in another field. Walking parallel to the high fence, heading down to the sea and the industrial area, I knew I was heading in the right direction, but was intrigued as to why it was such a high, secure looking fence. Anyway, there was a bit further on where a section had been pulled down and a gate to clamber over had been wired in - so I made it to the track or path I'd been aiming for. It went down through the narrow strip of woodland, and I assume was once another driveway to Pitcalzean House, as it came out on the road between 2 gateposts - much of its route was a raised flat embankment with ditches on either side, but it didn't seem hard enough to have ever been used by cars or carriages as even on foot it felt soft and marshy. Strange. Old entrance I emerged from, on to the B9175 road

But that was me back on the road, with a walk back south to my car at Nigg Ferry. Not a challenging walk, but a nice afternoon seeing a new bit of countryside for me, and even a wee summit ticked off too