After Stac Pollaidh on Thursday, we came back two days later to explore the vast emptiness of Sutherland a wee bit more... This time we picked a relatively easy hill - Glas Bheinn.
SMC Hillwakers Guide to Corbetts describes this mountain as "rather neglected" due to the neighbourhood of such grand peaks as Quinag, Suilven and Ben More Assynt. Maybe there is some truth to it or maybe we were just lucky that day, to be alone on the hill.
As it is a short route, Glas Bheinn can be perfect for a quick wintry day out (assuming that there is snow to make it a walk in winter conditions

) or a good one for beginners - including mountain-mad cats. When we drove up A984, the mountain looked a little boring, but later it turned out that it was hiding the best for last

our_route.gpx Open full screen  NB: Walkhighlands is not responsible for the accuracy of gpx files in users posts
There are three parking areas along the road. I imagine these car parks are fully-packed in the summer as it is also a starting point for Quinag route, but as we arrived there was nobody in sight.
Views are fine even from the lower ground. West to the car park, the rocky slopes of Quinag. To the north, Loch Glencoul. Nice, nice

The first bite of the cake tasted really good. Quinag from the car park

We started along the road but soon we turned to a wet path that circles the western slopes of the mountain. I was glad I remembered to wear my waterproof boots and gaters! The path went slightly upwards, but at some point we came to a conclusion that it didn't really matter which side of the hill we tackle - it looked just as steep everywhere

. So we left the path and headed straight towards the slope. A small herd of deer watched us from above, probably wondering, what are those silly people doing In dry wether it is easy to simply climb up the moss and grass. Unfortunately, we had a great choice to do that and risk slipping on a very wet vegetation, or to walk up the scree - two steps up, one step down. All in all, lots of fun and games! The steep section of the climb is only about 300m in ascent, but it felt more like 3000

Once on the ridge, the rest of the walk is a formality. And only from the summit plateau one can appreciate the real beauty of Glas Bheinn. The ridge of Glas Bheinn Loch a Choire Dheirg on the northern slopes of Glas Bheinn Quinag in its full glory :) A familiar shape in the distance...

The summit plateau was quite icy, but we just about managed without crampons. We hopped on top of some boulders, which again was tricky in icy conditions. Finally we reached the top and sat by the cairn, facing south and enjoying the views. It all felt so great but something was wrong and only after some time I realised what - there was NO wind! Not even a breeze. How often does that happen on a mountain top? 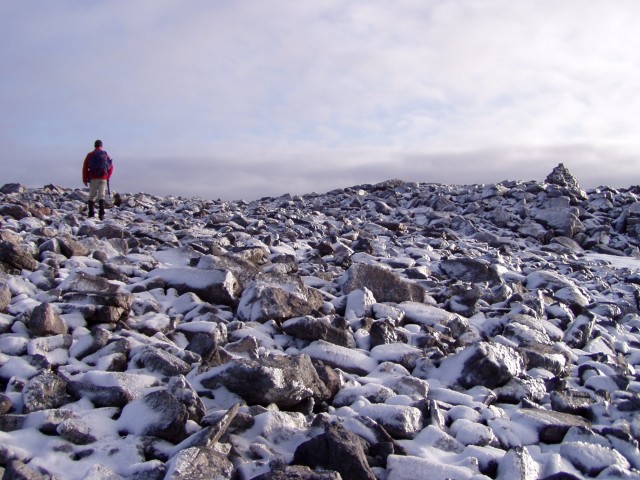 A few steps away from the top Although the day was turning grey we still took some photos of surrounding hills. Arkle and Foinaven in the far distance Eventually, we had to say good-bye to the enchanting landscape of Assynt. We headed downhill, carefully picking our way down the slippery slopes. We managed to walk back to the car without getting wet and without bruises on our backsides, and that itself was a great achievement

Fantastic - its such a wonderful area that if you get decent weather you're in for a treat.

I can believe you about the wind because before I saw your report I came across this wonderful photo of Loch Assynt taken the same day: Cracking stuff! That's a great day for it.

Quinag looks as beautiful as ever

Never been up this way in winter - jealous

Lovely photos. Hopefully we still have a few more crisp days ahead.