2 More in the bag

2 More in the bag

beinn-a-chaorainn.gpx Open full screen  NB: Walkhighlands is not responsible for the accuracy of gpx files in users posts
I was up and shivering by 5.30am, on the second day of this week’s adventure, but it was still 7.30am before testing the compatibility of bike saddle and tender buttocks, after yesterday's first off road cycle ( https://www.walkhighlands.co.uk/Forum/viewtopic.php?f=9&t=94782&p=414668#p414668 ). Happily, sitting seemed possible for the second ride to Derry Lodge - just one of Queen Victoria's hunting lodges. Now, on known territory, I was more confident of the terrain and the ride was accomplished in less time so that, before you could say aristocratic privilege, the Scots Pine trees surrounding Derry Lodge came into view. 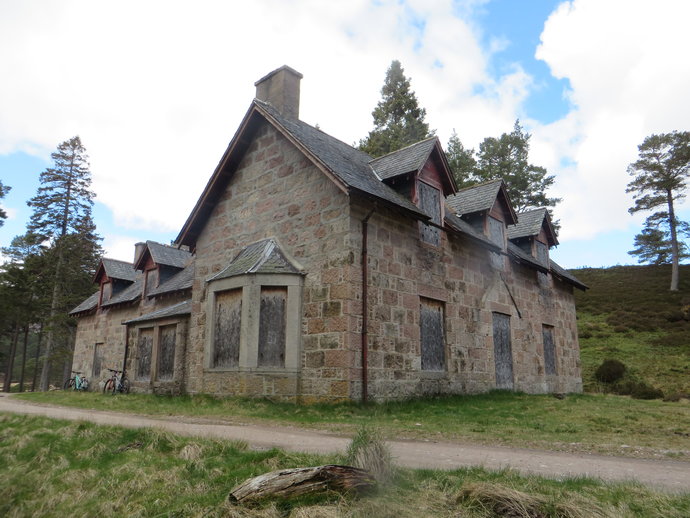 After padlocking the newly named hybrid - Vic - around the same drainpipe as yesterday, I set off chanting my mantra, those forgiving words, “I’ll just see how far I get.” This time I turned right, before the bridge over the River Derry, heading north. The initial undulating trek through the woods reached a crest where a small cairn indicated a narrow, but clear, path to the right. It continued in an upward direction, like they all do, until reaching the ridge. From this height a wide expanse of Cairngorm hinterland could be seen, stretching between my current goal and the second Munro on today’s route, clearly visible and not looking too far away.

Before then though, I needed to claim Beinn Bhreac and, for my efforts, was rewarded with majestic mountain scenery, in a panorama that spoke directly to the soul. For the majority of the British Isles, May is indicative of late spring and looks favourably in the direction of summer but, in these wilder climbs, winter can often offer an unwelcome resurgence, at least for this good weather walker. Admittedly, I had just conquered one Munro, with some trudging through wide ribbons of snow, but how on earth was I going to manage a week of it, hopefully bagging Munros several metres higher than this one? I left this question hanging and, with the summit rituals completed, it was time to put another in today’s bag. The squelchy land between the two peaks would so often be a boggy quagmire however, after what must have been one unusually prolonged dry spell – the last two days not withstanding - the trek over was only mildly swampy. This was a blessing given the mainly pathless hillside I was about to flog up.

It can only be age, and the remains of winter lethargy, that accounted for the couple of hours before Beinn a’ Chaorainn was topped. Though, in fact, it is a scientifically validated fact that the nearer a mountain seems the longer it takes to get there. {Walsh, B. M. (2019), Mirage and Reality On The Munros - unpublished}

Admittedly, I did much meandering as I tried to avoid deep blankets of snow lying across the boulder field on ascent but, what hadn’t looked like much from a distance had materialised into another massive expanse of physical and psychological effort. If only I had started this malarkey 30 odd years ago.

Once on the ridge the gradient, as so often happens, was easier and a clearer path took me to the summit, where I compared notes with two very friendly young Irish women who had been wild camping at Loch Etchachan the night before. So, there we are, another summit cairn, another Munro in the bag, and more stunning views. I strode from the top in spirits that couldn’t be more radically different than those that had accompanied me just 20 minutes earlier, when I questioned not only my physical ability but also my sanity. The venerable Naismith, suggests adding an extra minute, to the timing of your walk, for every uphill contour that you cross. Clearly, he hadn’t met this hill walker. However, if going up steep-sided hills was torturously slow, going down this particular mountain was a matter of not much more than minutes. Care was needed to cross the bands of snow over rocks, some firmly secured and some not so secure but, after that, it was all plain sailing. Thus, I was soon down in the valley soaking up the Splendour of Glen Derry, with most of the afternoon to enjoy it. I knew it was a long walk back to the bike and the afternoon was heating up but, with the satisfaction of having achieved my goal, I was ecstatic. A little way down the glen I sat to enjoy the refreshing spray from Glas allt Mòr, taking my first real breather of the day. Rested by the lilting sound of water tumbling over rock, I looked with wonder into my first sight of Coire Etchachan. A number of walkers think of the Cairngorm Mountains as boring lumps of hill but I would challenge anyone, to sit where I was - on such a day as this - and not be blown away by the scene. Several walkers past me on their way up, each of them looking red in the face from their exertions and the heat of the day, now well over 20 degrees; I was so pleased that my early start had given me a bit of a head start on the sun's powers. I pulled myself away from the visual extravaganza, knowing that my energy bank would be tested further on the bike ride still to come. Those who saw me, on my way down the glen, will - doubtless - have seen an aging hill walker looking hot and tired. What they will have missed is the ten year old girl, with her skipping rope, doing doubles and trebles all the way back.

Further down, I released the metaphorical rope and stopped to chat with a man who told me he had been sitting there for a couple of hours, soaking up the magic of this spot. He said that we often missed the true beauty of the glens, seeing them as a inconvenience on the way to the mountain summits and, in doing so, we missed the flora, fauna, and wild life that inhabited these remote spots. The Cairngorms were fabulous because of the whole environment including - but not exclusive to - the mountain tops; how right he was.

The beauty of Vic, my bike, resting against the walls of Derry Lodge, was at once welcome and repugnant. The effort of a forty five minute cycle ride, after a day that already ran to eight hours, wasn’t an attractive prospect. However, the thought of covering that distance on foot was even less appealing. In the event, once I was on the bike, the journey back was exhilarating. In the 1980s, the soul mate and I had often used bikes to get to the start of our walks, and subsequently had reminisced about this feat of endurance, with amazement. Now, here was I - 35 years on - doing the same, and with stiffer walking in between the cycle rides. I might not be the fastest on the hill but I wasn’t doing badly.

Back at the Kangoo, I gave age a little indulgence, heaved off my rucksack, and settled down for 40 winks. Thus, I started a pattern that served me well. An hour or so shut eye, after the early start and day’s endurance, followed by making of sandwiches for the next day and getting the rucksack ready to go. Then, it was the evening meal and, with camping gas so easily on hand, each day was a gourmet opportunity - relatively speaking! The convenience of the micro camper

After this, a chat with the soul mate, the length of which depended on the robustness of the phone signal. Finally, I finished my day by pouring a pint (or two...), making notes of the current days adventures, the photos taken and then, reading my route for the next day, ready for the early start on the next day. bernadettewalsh wrote: Those who saw me, on my way down the glen, will - doubtless - have seen an aging hill walker looking hot and tired. What they will have missed is the ten year old girl, with her skipping rope, doing doubles and trebles all the way back.

I'm not jealous of the "micro" camper

Love your camper van and nice to see another woman of mature vintage going it alone - very inspiring. I can show this to my family who think I am slightly mad and dangerous.....