When asked to name the classic ridge routes in the Scottish mountains most hillwalkers would list Aonach Eagach, CMD arete, Forcan ridge and the Skye Cuillins among them. I suspect few would mention the Lochailort Pyramids hidden away in Moidart. That's a shame as they offer a delightful day out in the hills, albeit one that does not involve tricky scrambling or nerves of steel to edge along exposed sections. Even better their relative anonymity means that you will have the three Corbett peaks and their interconnecting ridge virtually to yourself. Even on a fine Easter Sunday there were few out on these hills. In comparison, the Aonach Eagach would have been more crowded than the M6.


Starting from the small car park at Inverailort our walking club split in to two groups with the larger group opting to undertake the horseshoe route, whilst my smaller group headed off to tackle An Stac. Comments from walkers that had already climbed An Stac included, "It is relentlessly steep" and "I know if I climb An Stac I won't want to continue beyond it." 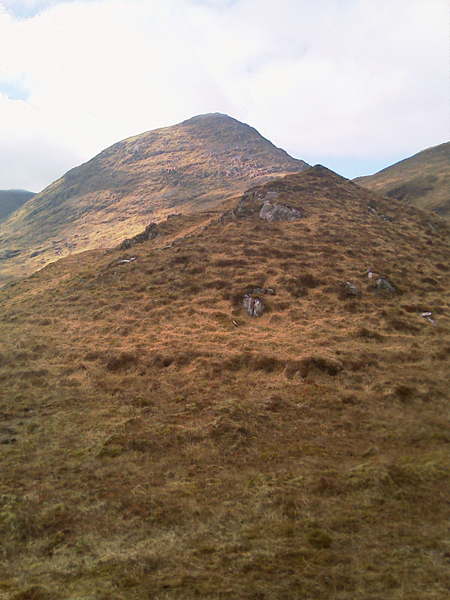 Yes, the north ridge of An Stac is steep but I have been up steeper. From the col below it does look at though the climb will go on for ever, but on a clear day you are rewarded with views of the azure clear waters of Loch Ailort and the Sound of Arisaig. Beyond An Sgurr on the Isle of Eigg points stubbornly upwards from the low lying island around it. Even further away are the proud peaks of Rum with a halo of cloud encircling them. Concentrate on these visual diversions and you will soon find yourself topping out on the summit, out of breath and ready for lunch. 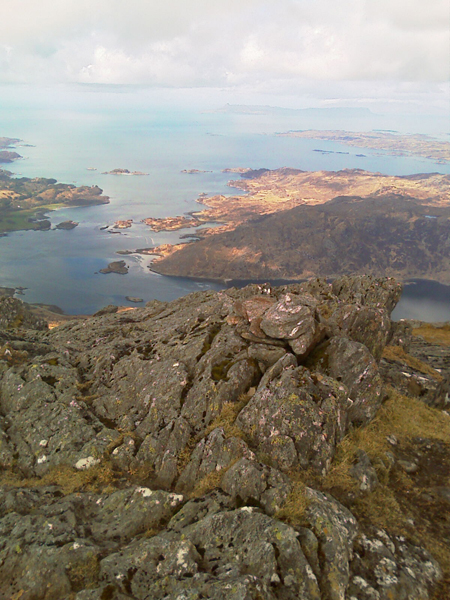 The Sound of Arisaig

The real killer of this walk is the steep descent to the col on the south side, a 250m knee crushing descent when faced with an almost vertical climb of 160m up to the Bealach an Fhiona. There we decided we did not have enough energy to climb Rois-Bheinn and descend to the bealach again before tackling the third Corbett of Sgurr na Ba Glaise. Not wanting to descend to the road beyond Rois-Bheinn, instead wishing to prolong the delights of ridge walking on such a fine day, we headed straight up Sgurr na Ba Glaise instead. Fine views deep inland greeted us with the snowy top of Ben Nevis dominating.

Picking our way around the rocky outcrops along the ridge we continued round to the Druim Fiachlach enjoying gazing past its crag deep into the corries below. The small lochan below the Druim's midpoint was our marker to strike north-west down heather clad slopes towards Inverailort, the white Lochailort Hotel our navigational beacon luring us with the promise of cold beer. How I managed to find the soggy parts of this hillside as I slid on my backside not once but three times I am still not sure. Reaching the valley floor with damp, tender and tired thighs was a relief.


090412 Lochailort.gpx Open full screen  NB: Walkhighlands is not responsible for the accuracy of gpx files in users posts

interesting... I have never heard of the pyramids...
I do prefer to do corbetts as they are a lot quieter with more of a feeling of remoteness, usually with no paths.... have done 4 in the last week and never met anyone at all. Now that the mornings are getting lighter though I will be back to doing the munros shortly.

We had hoped to do this round (plus Rois-bheinn) the other week but the weather was less than perfect so just did little Sgurr an Utha instead. The views look so great that I'm sure it's one to keep for that crystal clear day. Great report - whetted my appetite further!

It's definitely a route to save for a good day, you would be missing stunning views if you walked it in the clag. Athough I didn't climb Rois-Bheinn on the day it gives me an excuse to go back. Next time I can walk the entire ridge in the opposite direction and finish off on Rois-Bheinn.

How did the great pyramid on a map face excalty north? the pyramid of Giza(biggest one) face the north pole perfectly. and it was build 1000';s of years ago before compass has been invented. how is this possible?

Yes, I agree a great report and very appealing. I too have often been in the area over years and intended to venture out further than my socialising and visits. Too often just passed through or only just been in the pub. Thanks for the deeper insight - will follow when opportunity arrises, cheers