beinn-a-bhuird.gpx Open full screen  NB: Walkhighlands is not responsible for the accuracy of gpx files in users posts View from the Plateau on Beinn a Bhuird

The predicted 8 – 10 hours of today’s walk concentrated the mind, especially as my timings were falling just outside of the longer parameters suggested by my route masters, from the West Highlands web site.* I like to get up and away early for three reasons. Firstly, I cherish the peace and solitude of being alone on the hills. The very sounds of silence, as it were. That is, until those who set off long after catch up with me, which they inevitably do! Secondly, I get a head start on the rising temperatures of a summer’s day, which would often ‘floor’ me. Finally, if I should get into any trouble, there are still long hours of daylight to find my way, wait for emergency services or generally extricate myself from any given difficulty.
5.30am was really the earliest rising I could manage but, by giving the morning coffee a body swerve, I could dress, pick up my rucksack and be away by 6.00am. And, so I was. The early morning air has a unique quality of freshness, as it announces the new day. All the tribulations of yesterday count for naught. Onwards, upwards is the marching chant, “I’ll just see how far I get” is my own retort.

This weary soul set off with eyelids that seemed destined to touch the cheek as yesterday’s exertions were taking their toll. On the path beside the river Quich, I passed the semi-derelict cottage known as the Princess’s tea room, named after Queen Victoria’s granddaughter, who had married the owner of nearby Mar Lodge. On crossing the bridge the gouged out punch bowl became visible; its place in history assured by the fable that it contained a drink toast the first Jacobite rebellion. History and fable aside I just wish it held a potion to revive the physiology of this would be Munroist.

Ploughing on felt onerous as the long walk through Glen Quach lay out before me and my mind was prone to dwell on the length of the reverse trek to get back to the car. In between times there was the small matter of some 28kg to walk and 959 metres of ascent to climb. If this was my level of fitness on day 2, I considered the state I might be in after eight days away. What pieces would the soul mate need to pick up and put back together, as he always did. Home seemed a lot of walking and cycling away, and this week an almighty challenge all of its own, never heed the other 224 Munros still to go. At this moment they felt like an insurmountable dream. I must have been living in cloud cuckoo land to think I could ever do this, at my age and with my current level of fitness and stamina. Just as my negative psychology was teaming up with my physical energy, to put me clearly in my place, I remembered my mantra “I’ll just see how far I get” and, with this septenary of one syllable forgivingness running through my mind, I saved myself from spoiling the day altogether in an entrenched mood of doom and gloom.

In an instant I was relieved of the pressure to succeed and I was also reminded of yesterday’s conversation about relishing the beauty of the glens, as well as the mountain summits. It had taken just a mile or so to sort out the mind set and with this more optimistic outlook I began to enjoy the day. Even my eyes felt less heavy and more alert. The mountains ahead that included Beinn a' Bhuird rose up in the distance embracing the glen in a protective hug. In the meantime, it was the state of the Allt an Dubh-Ghleann that was exercising my mind. The authors of my route suggested that I would, at the very least, get my feet wet with a wade across. Under the worst circumstances it would be impassable. The un-squelchy bog of yesterday hinted that I would actually get across so, all that remained to be seen was just how deep this wade going to be? In the event, evidence of just how dry it had been was produced when I ‘hopped’ over the boulders that the shallow waters had exposed.

By now, nearly two hours into the walk, I was finally fully awake. This was just as well because the river crossing marked the beginning of the climb, through a forest of Scots Pine, that I was beginning to find endearing. The work of the National Trust here, abolishing the impact of a hitherto land rover track in favour of a clear path, was much appreciated as I headed onward and upward, just seeing – of course – how far I would get. It is rather remiss of Ordnance Survey to mark the tiny roofless ruin, just below the ridge, as a shelter. Some poor winter walker, caught out in foul conditions in this remote spot, might think their bacon had been saved only to find that a night spent here would offer no protection from the elements and a high likelihood of exposure.

For me, on this dry and increasingly sunny day, it offered an ideal place to off load the rucksack and stop for lunch. Lunch, I find, when walking the Munros, is not a concept fixed in time. For most of my life lunch suggests food consumed somewhere between noon and 2.00pm. On days like today though, leaving base at 6.00am, lunch refers to tucking into my sandwiches at any time between 9.00am and 3.00pm. When on the early side of this broad window, it is safe to say that the going has been hard and replenishment necessary to go on. Today’s stop was as much about getting the rucksack off as replenishing the energy bank. The positive mind-set, that had got me thus far, was being sorely tested by the pain in my back (no pun intended). This pain had crept up on me over a couple of years and reached a pitch during a week’s walking holiday on the North York Moors, when wearing the rucksack became impossible. All the muscles under my right should blade seem to contract and unite in what felt like a tight knot of muscular tissue. After strict adherence to a set of exercises from my physiotherapist the first Munro weekend had gone well. Three days of carrying moderately heavy rucksack, zilch pain – result. Two days into my eight day trip I was getting back to square one. Once off the back the pain was gone and a pause for breath was always welcome, especially in the upper echelons of the Cairngorms, with so much to savour.

From the shelter it wasn’t far to the ridge but, taxingly, the ridge itself was an uphill trudge through banks of snow, onto the broad plateau of Beinn a' Bhuird. More of the white stuff decorated the flat expanse leading to the summit. I used prior felicitous steps to ease my passage across the barriers, noting the snow clad cornice above Coire nan Clach and recognising how, in poor conditions, veering just a little to the right could result in disaster. Without snow the edge of the cliff would probably be apparent. On a shelf of snow though, how easy it would be to take one step to far, as the bank of snow gave way and be plunged into history – a player who has strutted and fretted his hour upon this high stage, only to be heard no more; ugh, scary stuff. Thankfully, with clear visibility and pioneer footprints to follow, I was able to notch up Munro no. 59, at a snow encased summit cairn, in perfect safety. Dual sentiments of achievement and pain (carrying the rucksack had now become excruciating), marked this auspicious achievement as I got higher in this archipelago than I have ever been before. I was also rewarded for my endeavours by my first sight of a ptarmigan still in it's winter coat, albeit somewhat mottled for the spring. 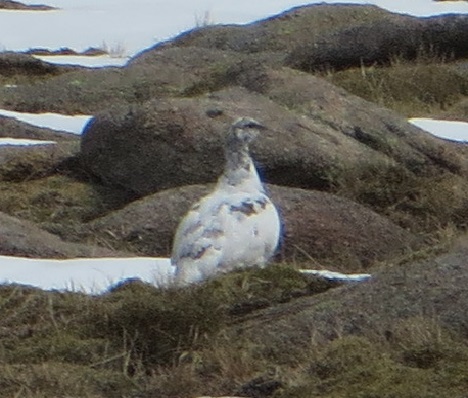 The conquest alleviated the effects of pain to some extent but, after using the same footprints through the snow on the reverse trip, I was glad to use the shelterless-shelter to get some respite from the pack. How I would have liked to linger longer but, even more so, how I would have liked to have employed the services of a personal Sherpa to take my load. Alas, it was me and me alone, on the long trek back to the car at Allanaquoich. I started out but just a little way further down was stopped in my tracks by a sunbather. By the time I needed to cross the river bed again I could carry the weight no longer. Using the dry bag in my rucksack I emptied all the contents I could into it and continued on my way, swinging the dry bag in one hand and carrying a virtually empty rucksack on my back. Thus attired, the back pain abated a little, the muscles now being too tightly woven to give instant relief. Nevertheless, the walking was bearable and the residual pain didn’t impinge on my enjoyment of the afternoon.
This was the longest walk of my 50 odd years of walking, my back continued to give me jip, the sun was hot and swinging an arbitrary bag not the most convenient way of carrying gear. But…big but, I had achieved, again today, what I set out to. I had another long walk in store tomorrow and then on Wednesday, with the forecast predicting very hot temperatures, I would have a rest day. I might complete the week yet, and accomplish so much more of what I had sought to. There was definite spring to my step as I relished my walk back to the car.