The weather recently has been quite unusual: There is no snow below about 700m. but the high tops are bright white which leads to views which are amost Alpine. Yesterday in perfect weather I did my usual "St. Fillans round" thru E and W GlenTarken and had tantalising glimpses of Meall Ghaordaidh and the Tarmachan through the 460m bealach at the head . The sun was also illuminating the head of the glen rather nicely

But I had no camera

The weather was forecast even clearer today, so I resolved to repeat the route and get some pics.
It became evident by about 10.am that it might not be as good as forecast, so to save 40 min or so I drove to the parking area at the foot of the Glen Tarken track and set off from there.
The path zig- zags up through the oak forest, crossing the disused railway and continues past some old houses. I decided to explore a track on the L that I'd not been on before, It leads to a mast of some some sort, but beyond on the horizon was a gateway to which I continued over boggy ground. At the gateway a new fence continued W with a plantation beneath and grassy slopes above. { the 1: 25k map shows the track continuing W through the upper part of the plantation}
However I climbed up and back right below a very well built wall until I found a gap above which I followed a fence climbing diagonally up N towards Creag Each. Looking East up Loch Earn: Jerusalem in the foreground A wider view across lower Glen Tarken
As I continued, the view through the Bealach improved - though from this side you see the Lawers group. Glimpses of the hills N of Loch Tay 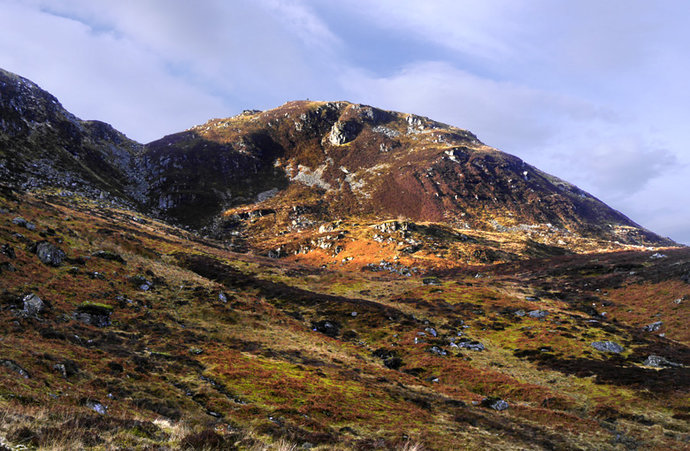 In the flat corrie below Creag Each: the gully in the corner is full of moss-covered slippery boulders and finally the Tarmachan
As I had just come for a stroll without a pack or any food/drink I decided to descend from here to the track, crossing this rounded grassy ridge which I guess is the lateral moraine of the glacier that carved out the glen Re: A stroll in Glen Tarken

Looks like a nice walk. The Lawers and the Tallmachan covered in snow look somehow surreal with the snow-free-foreground. The colours look a bit unnatural in some pictures.

Re: A stroll in Glen Tarken

Grisu wrote:Looks like a nice walk. The Lawers and the Tallmachan covered in snow look somehow surreal with the snow-free-foreground. The colours look a bit unnatural in some pictures.

Hi Grisu
It was the "surreal" juxtaposition of the snow and foreground that persuaded me to show these photos. From a distance, even when the sun is shining, the Perthshire moors look a rather uniform "Dun" shade, but at close quarters they are a mass of colour and that's what I wanted to highlight.
So what if the colours are a bit unnatural (over-saturated)? Modern digital cameras undersaturate quite horribly most of the time. To me photography is an "art form" - and I am much more interested in showing pictures that people enjoy looking at, than in portraying reality.
Thank goodness Impressionists such as Cezanne didn't take any notice of critics who said their colours were unnatural - not that I'm making any comparisons of course