Taking advantage of some late summer blue skies and a stay in Alston to break the usual ‘straight up-&-down’ habit of reaching the North Pennine summits. Flinty Fell is the closest of all for a quick roadside visit, but there were tempting riverside LDPs on the map to make a proper walk out of it, and a pretty good one at that.

flinty.gpx Open full screen  NB: Walkhighlands is not responsible for the accuracy of gpx files in users posts
The way from Alston to Nenthead is lovely, a gentle out-of-the-way walk following a quietly bubbling river towards its source. This is 'Isaac's Tea Trail' on the map and on the generally decent waymarks (it's hard to follow when it leaves the Nent around Blagill, perhaps deliberately on the local's parts as the correct way on the map looks to lead close to private homes), which sounded intriguing. Later research shows this to be a bit of recent local creativity rather than a route that was perhaps ever actually travelled (https://isaacs-tea-trail.co.uk/) but nothing wrong in anything that keeps a good path well-trodden, and this is a very good five miles. 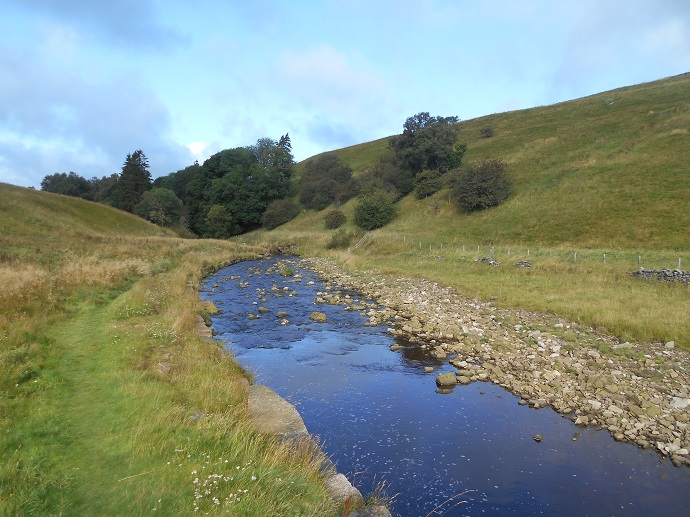 The only real effort on this route is the stiff climb on the road out of Nenthead, past the old mines and onto the high moor (perhaps 'Nunnery Hill' locally, but 'slopes of Flinty Fell' to Hewitt-walkers), but it's short enough and helped by very good views back at each pause. From the high point of the road, it's a short access-land walk over damp grass and very little ascent to the summit - but obstructed by a new and very well-built drystone wall without stiles. I just about found a way over without damage, but it's probably not to be recommended – following the ROW from further west on the road (my way down) might be better. No real excitement in the flat and mining-scarred summit area – it isn't the highlight of this walk – but satisfaction nonetheless before a sharp exit as the rainclouds gathered. 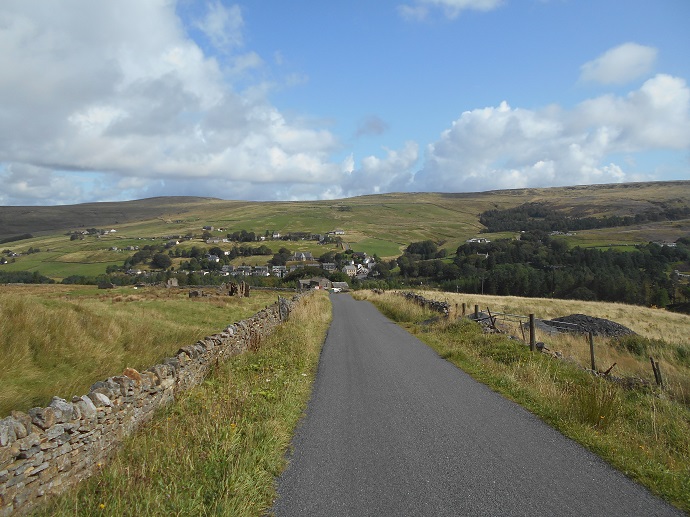 North over the robust wall There isn't too much shelter following the lanes and bridleways down to Garrigill – probably good views into Tynedale and the high North Pennines on the far side but not beneath the clouds and thinking only of how wet it is! Briefly only though and Garrigill itself is a good spot, a sleepy country village quite in contrast to the mining settlement just over the hill. The two villages had closed-down pubs in common though (Garrigill's looks terminal – I think Nenthead's may have reopened since last September), scuppering the plan for a drink and lunch but sadly an increasingly common sight. Hound Hill from the wet descent to Garrigill

It's the Pennine Way from there back to Alston, not that there was a single other walker in evidence on this summer Sunday, first charming beside the Tyne and then a little more nondescript higher up the fellside; a decent easy-walking return and then a village very well-served with the pubs lacking above. Refreshed, the ground drying up, and a bit of time left in the day to fit in one of the more notorious of the remaining summits in Three Pikes.

threepikes.gpx Open full screen  NB: Walkhighlands is not responsible for the accuracy of gpx files in users posts
The short route from just below and to the south is nowhere near as bad as the reputation of this hill though – follow the grassy hushes up from the roadside and then it's green and only a little marshy to a prominent cairn on the edge of the high ground. Pretty tempting to stop there, but also pretty clear that there was higher ground a few hundred yards north – it's possible to hop the groughs to get there though and quite satisfying to see how the difficult the approach looks from all other directions! What should have been a straight return was dependent on the compass in featureless terrain too; nothing is all that easy around here. The wet way towards Great Stony Hill from the summit... Teesdale from near the parking place


This was my 300th Hewitt in those counts to the right but without much of the feel of a landmark – it's too close to the finish and there are too many others that I've climbed as Hewitts before they were demoted (or before they were promoted) for the number to seem quite firm enough. Not many numbers left, but probably a few years to get there...