A' Chraeliag - but not quite for one of us

A' Chraeliag - but not quite for one of us


The forecast for the Saturday and Sunday was much better, so the decision was to head for a ridge, specifically to go for A'Chraelaig and Mullach Fraoch-choire, which gave me the option of taking the less dramatic route up the glen of An Caorann Mor, and, if things worked out, meeting up with the other three somewhere on the ridge. 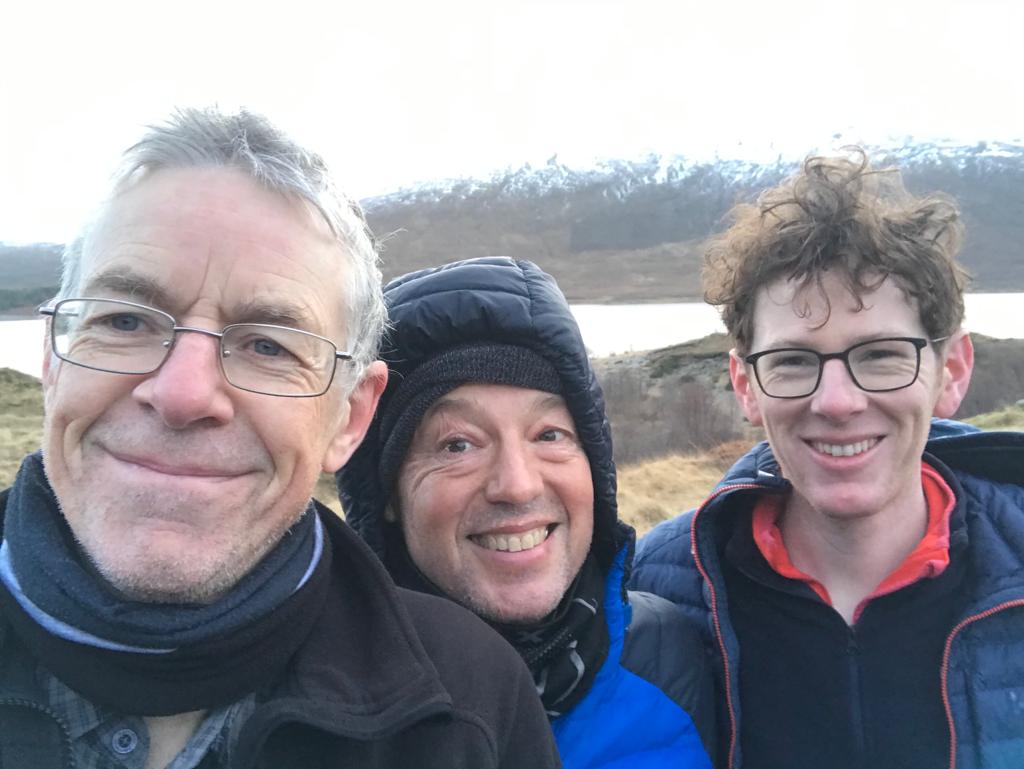 The three musketeers, minus D'Artagnon, just before we split up. The musketeers took the diretissima route up the shoulder of the hill; I wimped out and opted for the gentle ascent up the broad track up the glen bottom that eventually leads to Glen Affric. The loose plan was to meet up at the bealach between A'Chraelaig and Mullach Fraoch-choire if possible, but for neither party to wait for the other. 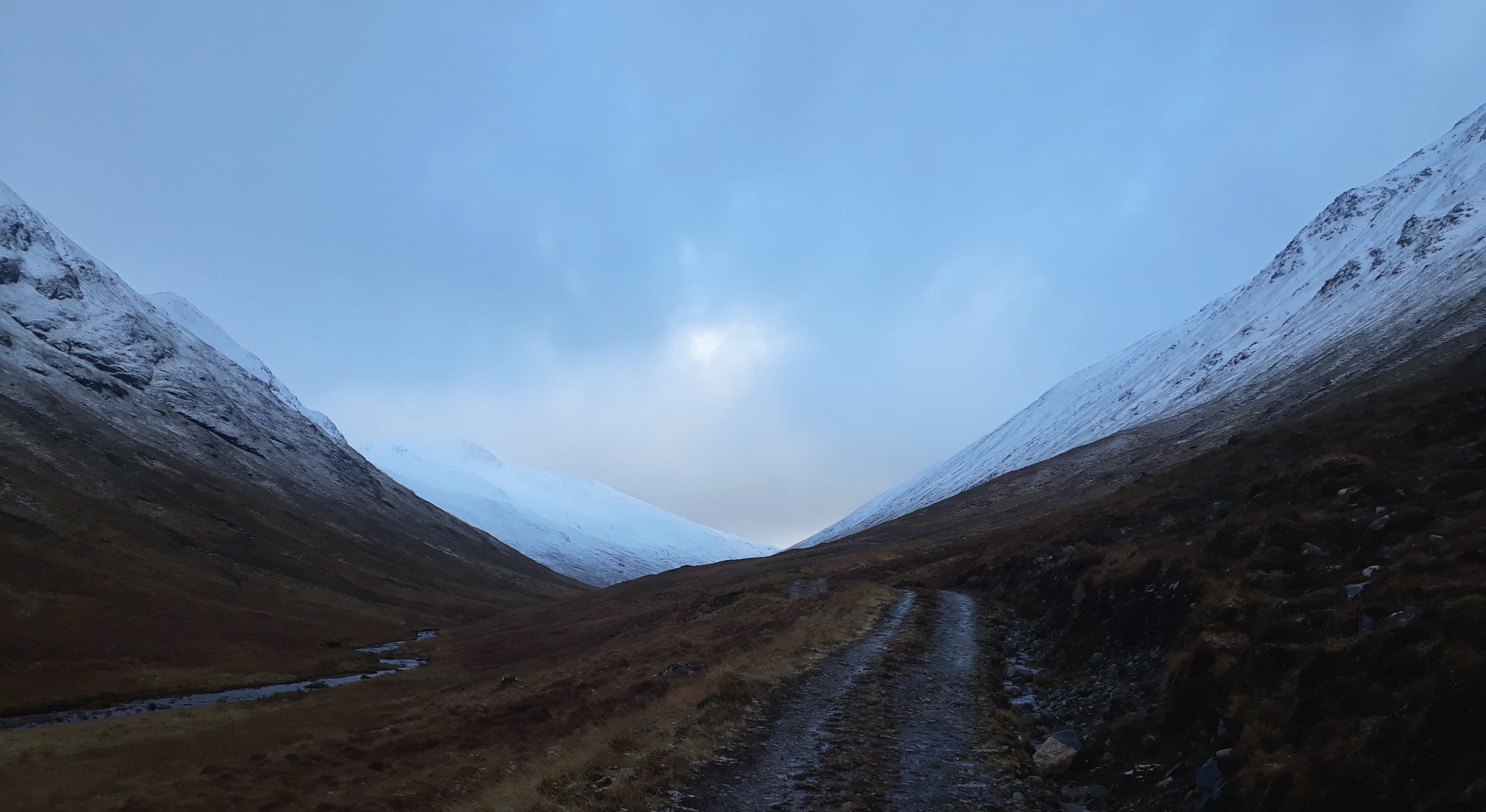 The walk up the glen was wonderful. I don't know exactly what mindfulness is, but whatever it is, it would be hard to beat being deep in the hills like this.

An hour or so later, shortly after the track high point, I turned up right and set off up the steep south shoulder of Allt Coire a'Glas-thuill towards A'Chraelaig. 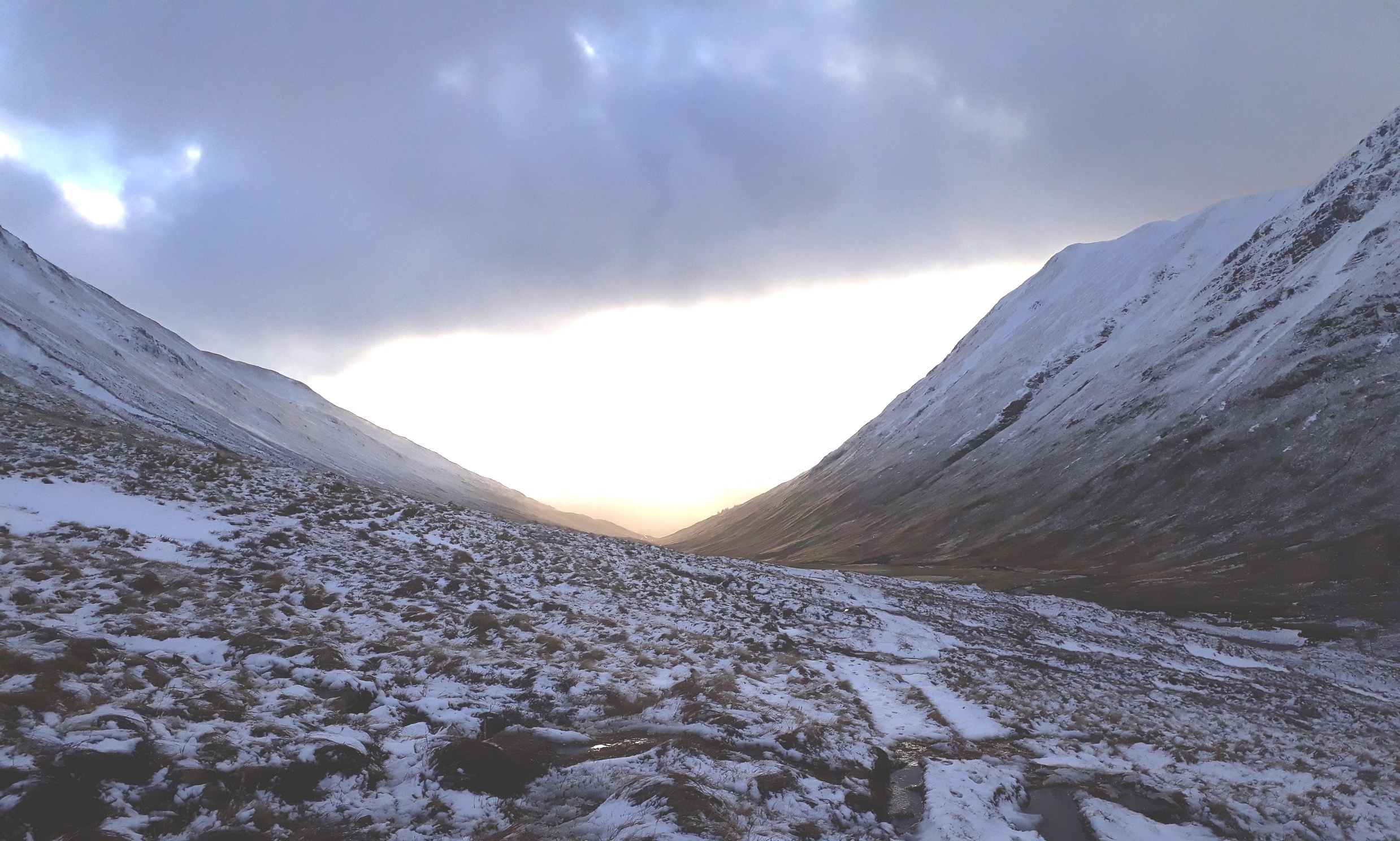 20200118-103513-2. View looking roughly south down the glen (An Caorann Mor) from just before the point at which I headed up the glen side. Moody, wintery, deeply satisfying.


At this time the other three will have just reached the top of the A'Chraelaig ridge.. 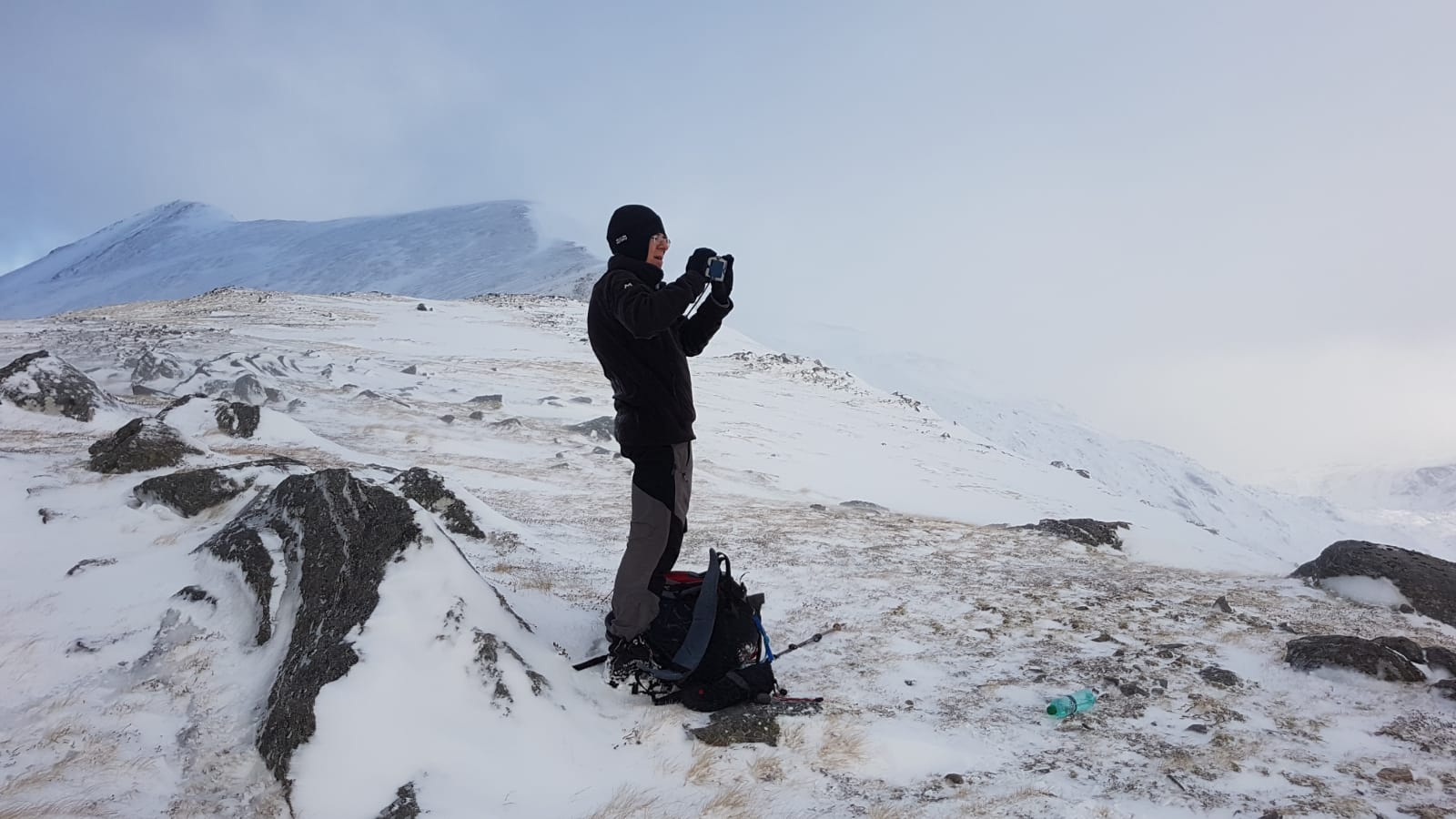 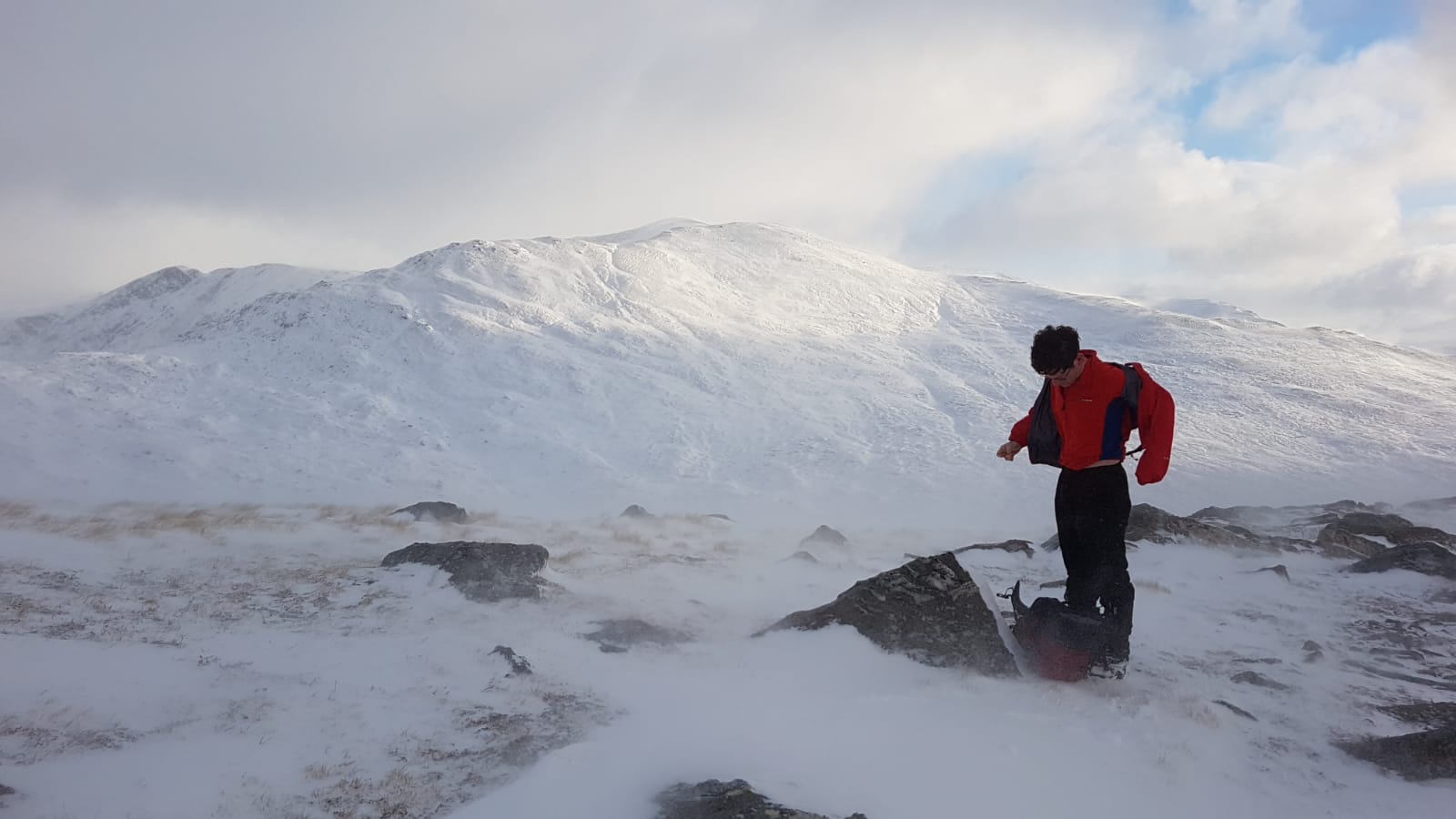 
Meanwhile, the pull up the glen side was painfully slow for me - a pain amply compensated for, though, by the views.


...while the musketeers were traversing the ridge... 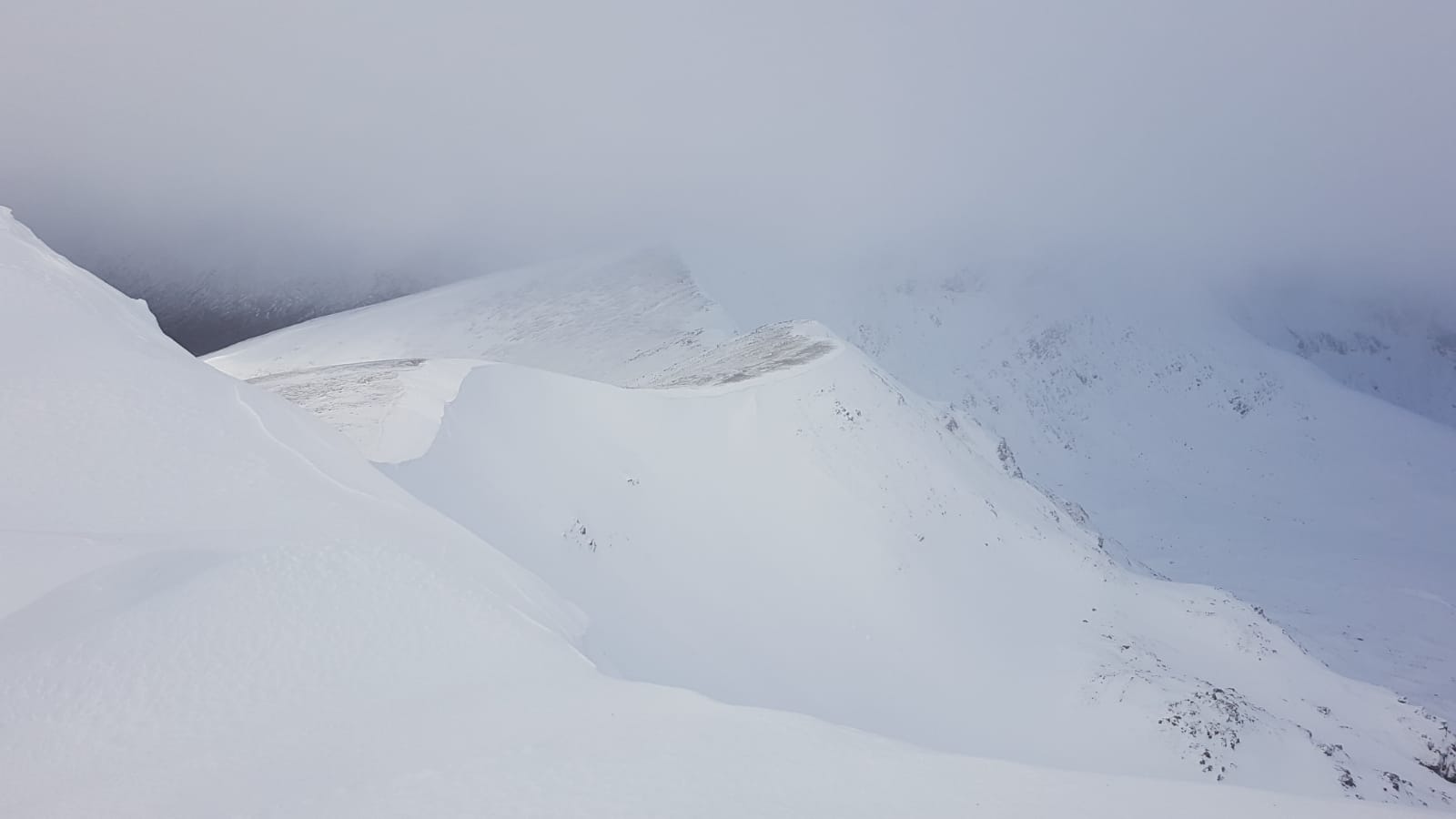 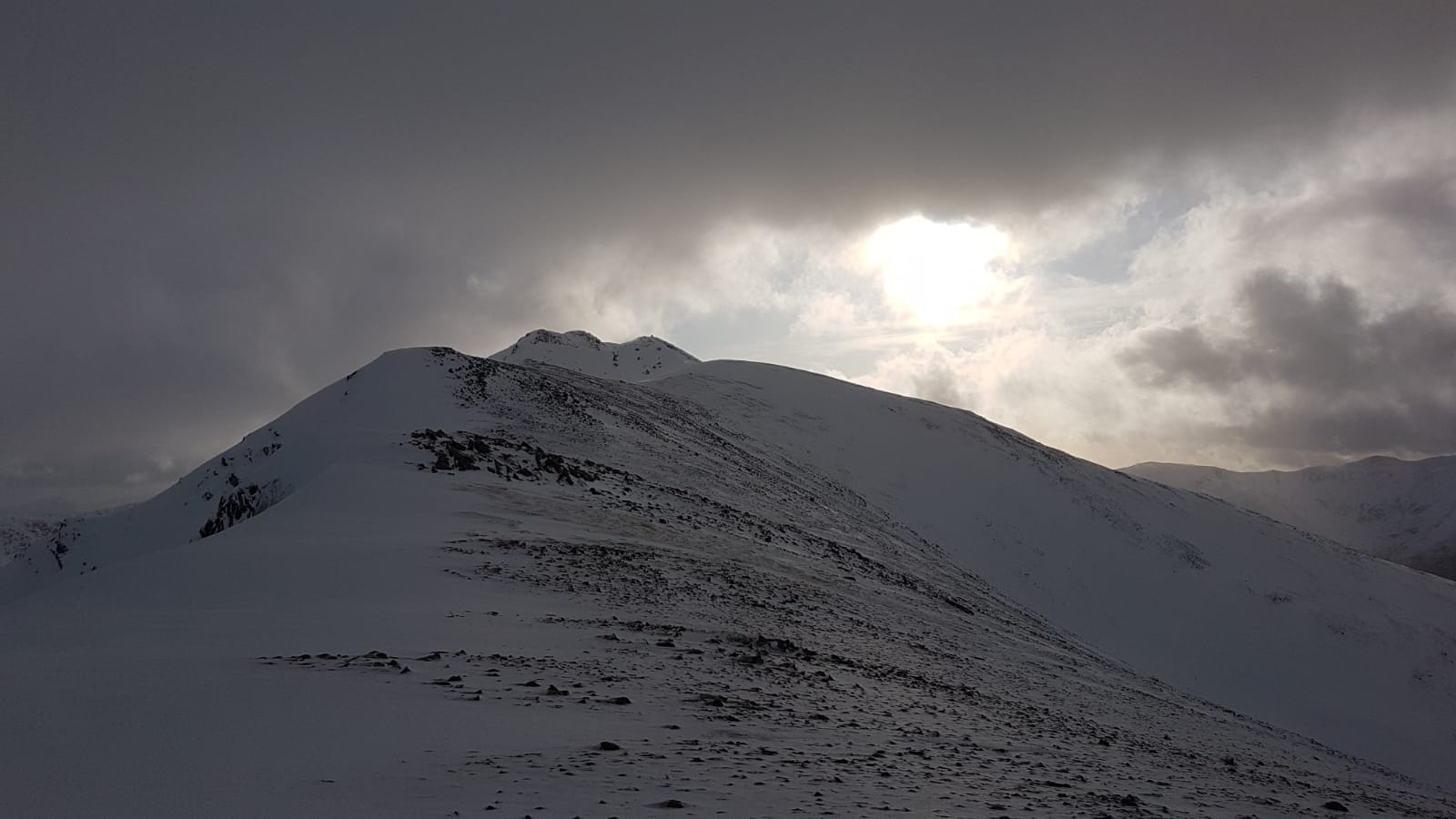 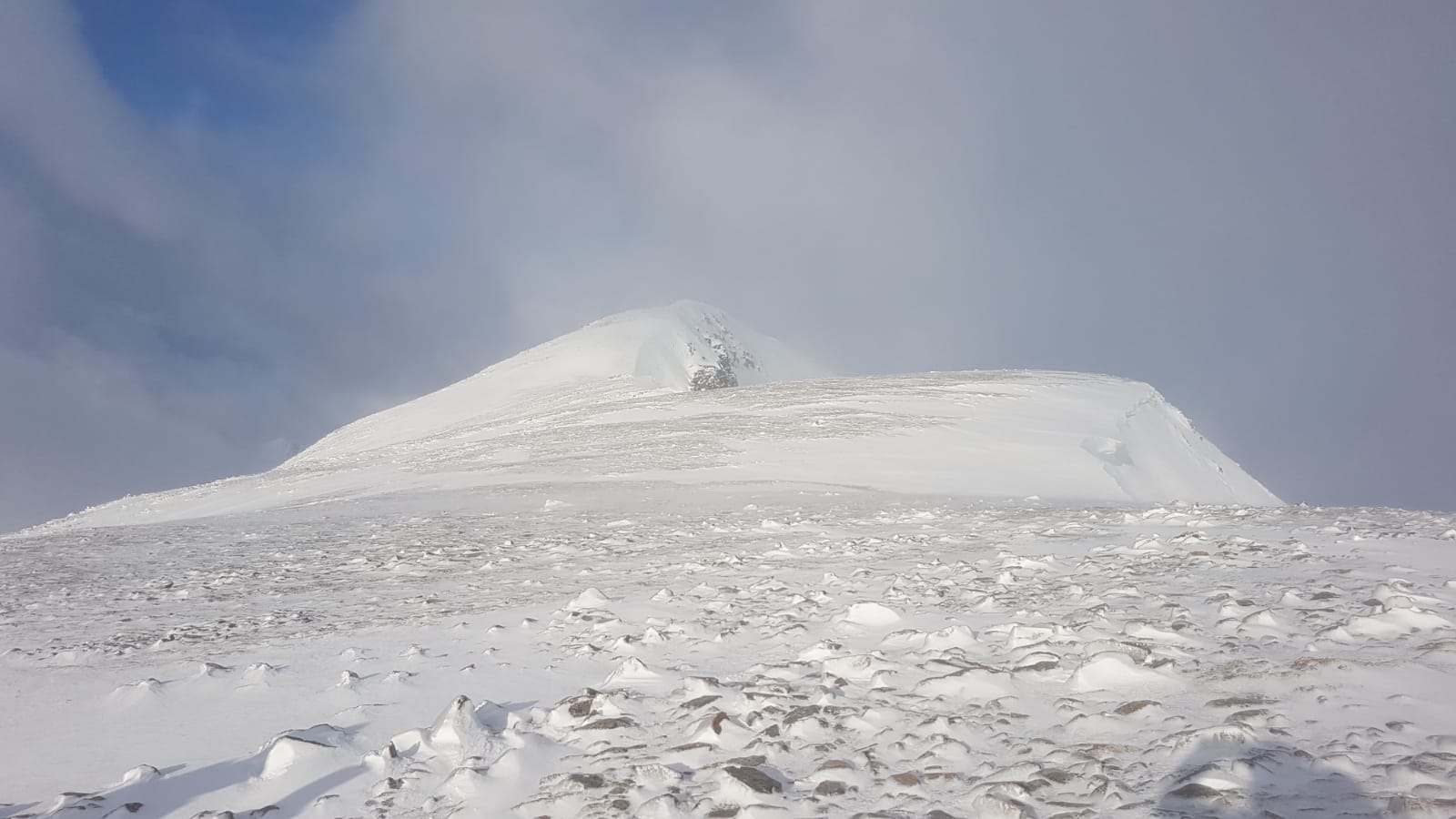 Wonderful stuff! And I wasn't at all envious when I viewed these pics...


As I ascended, there was more and more ice beneath the light powder snow covering, and I realised I would be best advised to don crampons for the descent. 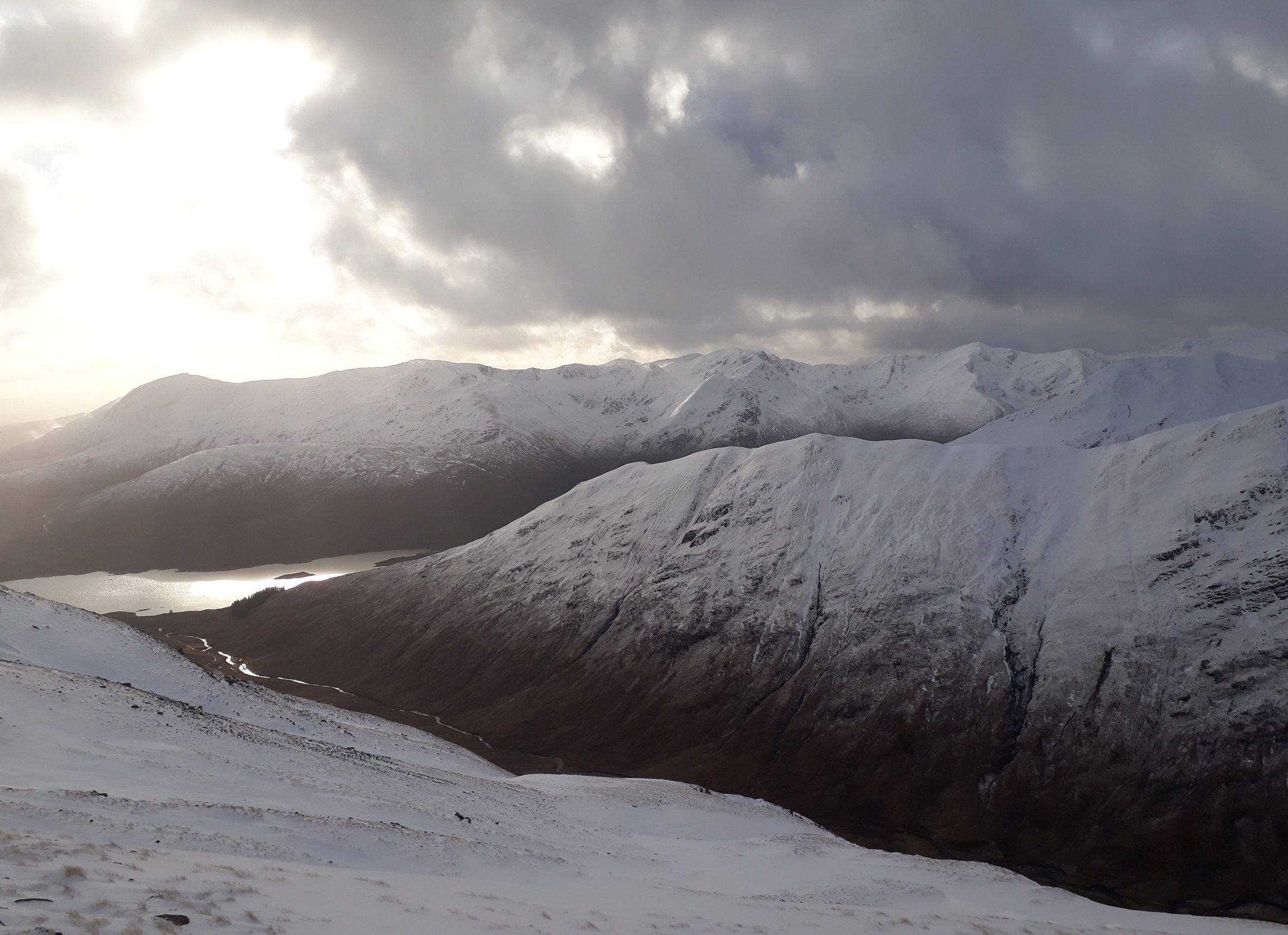 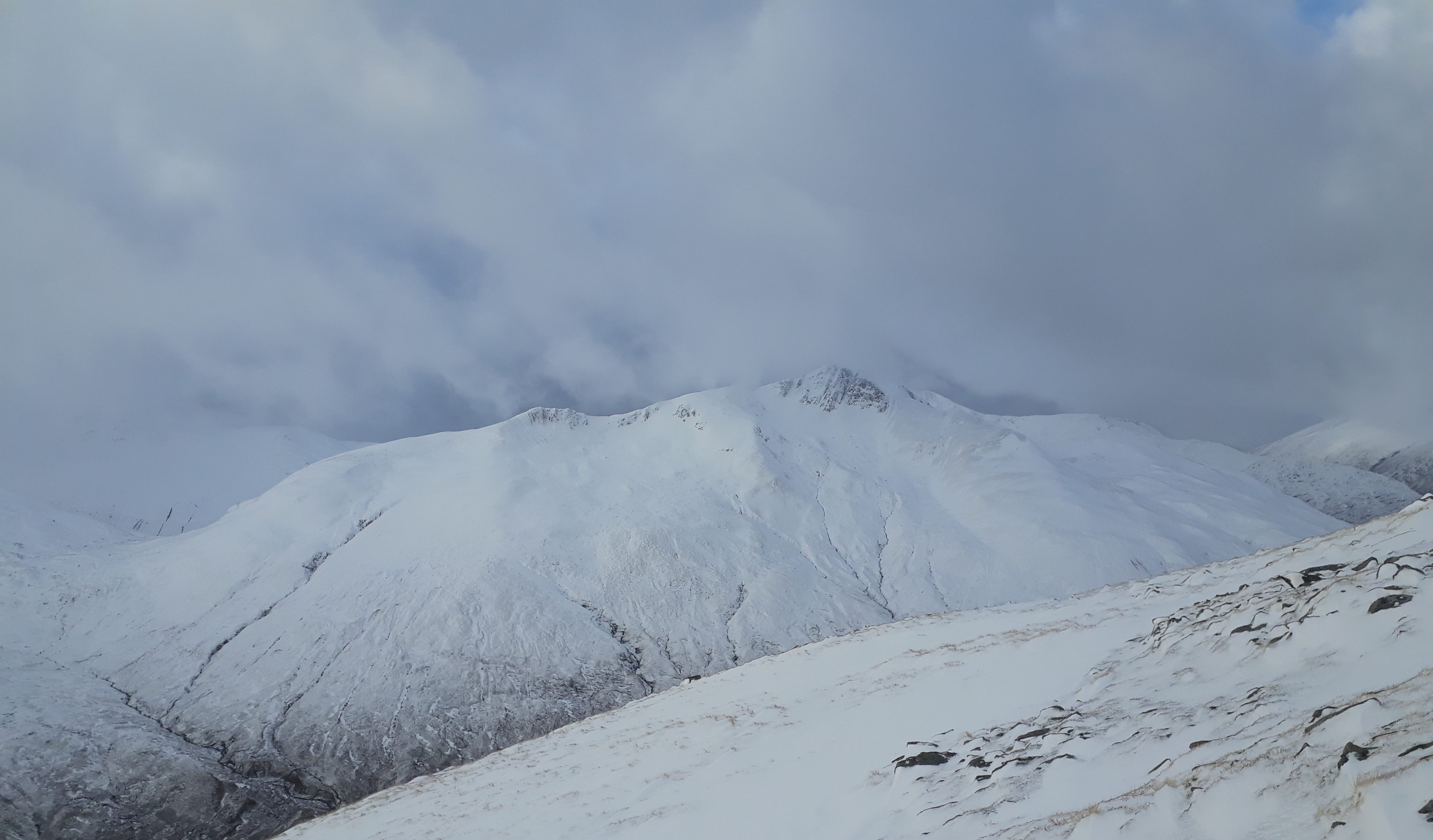 By this point I'd noticed that I was taking fewer and fewer steps between rests, and finding it ever harder going. Eventually I decided I was "pushing it" rather, something I'd been enjoined by the cardiologist not to do. So reluctantly I decided to turn back.

After donning my crampons, and taking a last look at the summit of A'Chralaig ... 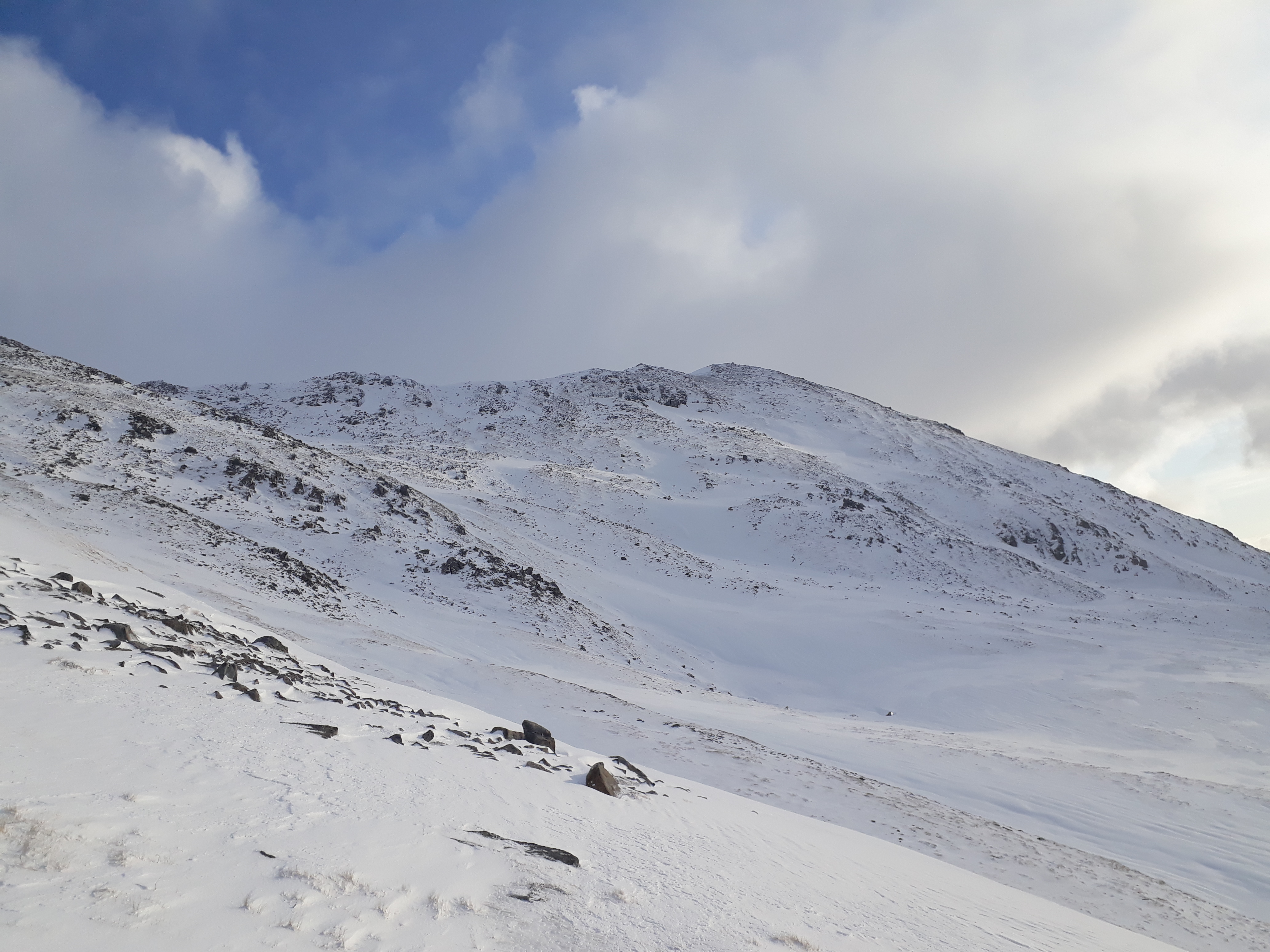 
The three-party meanwhile had summitted A'Chraelaig... 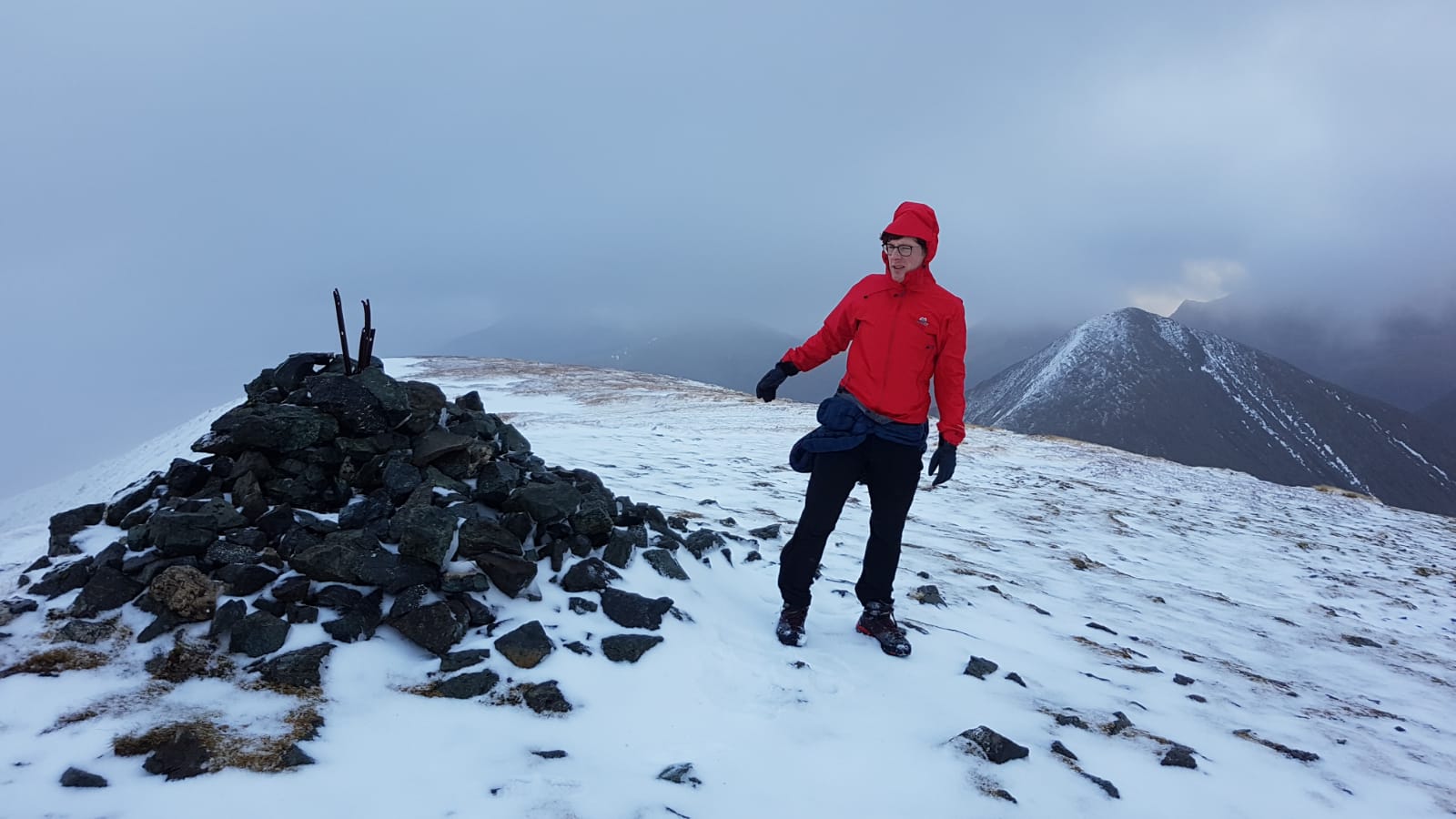 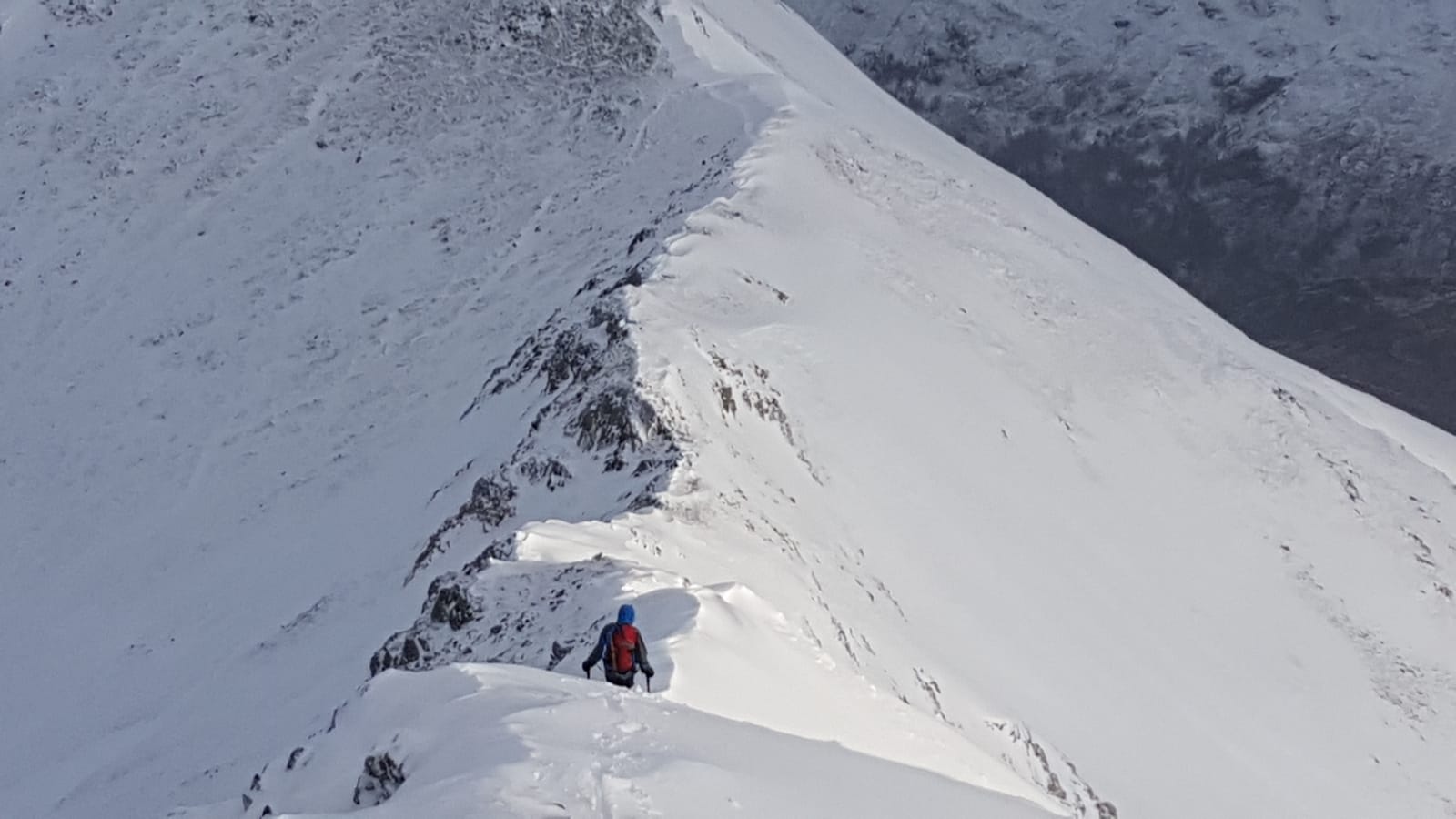 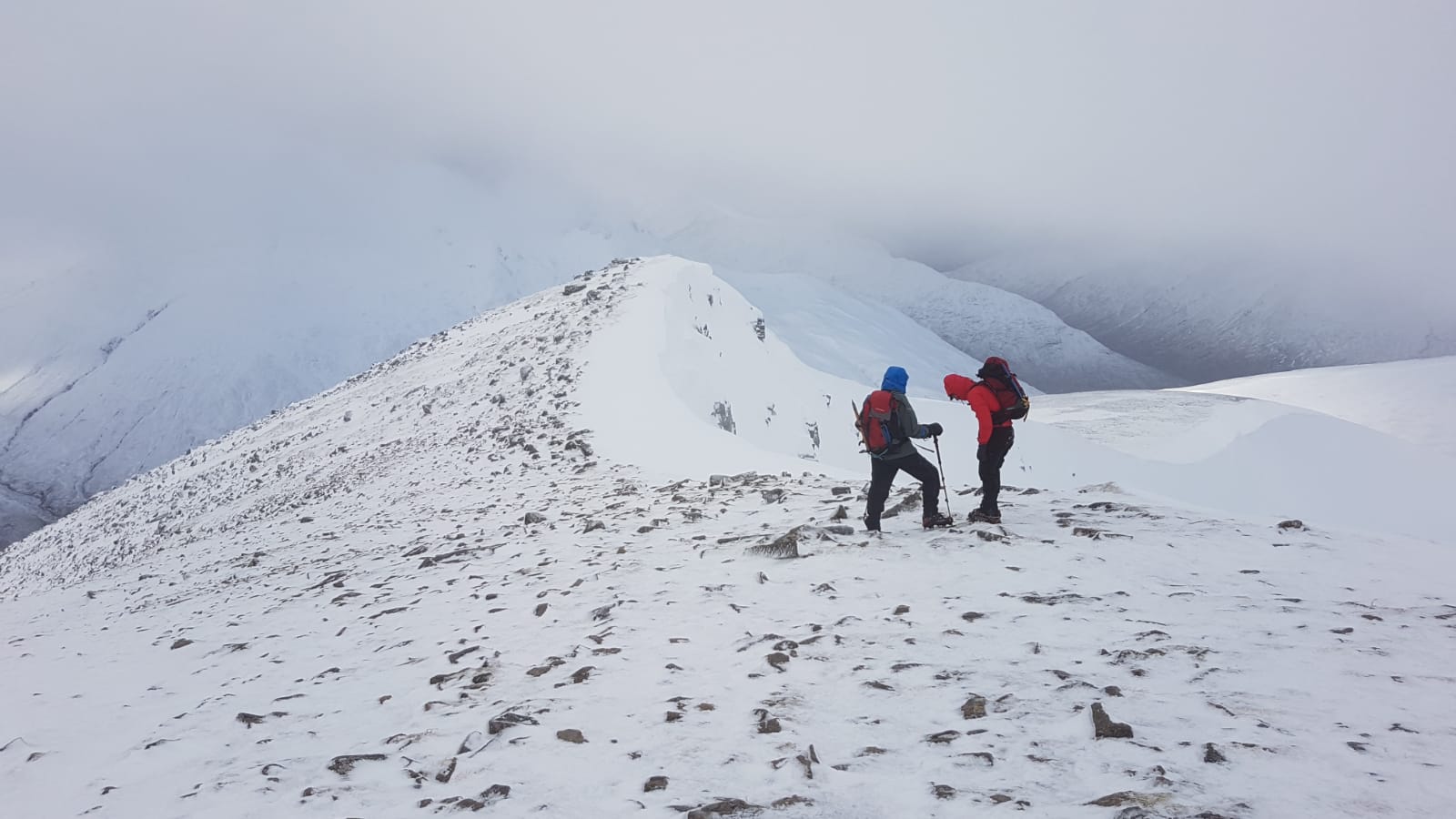 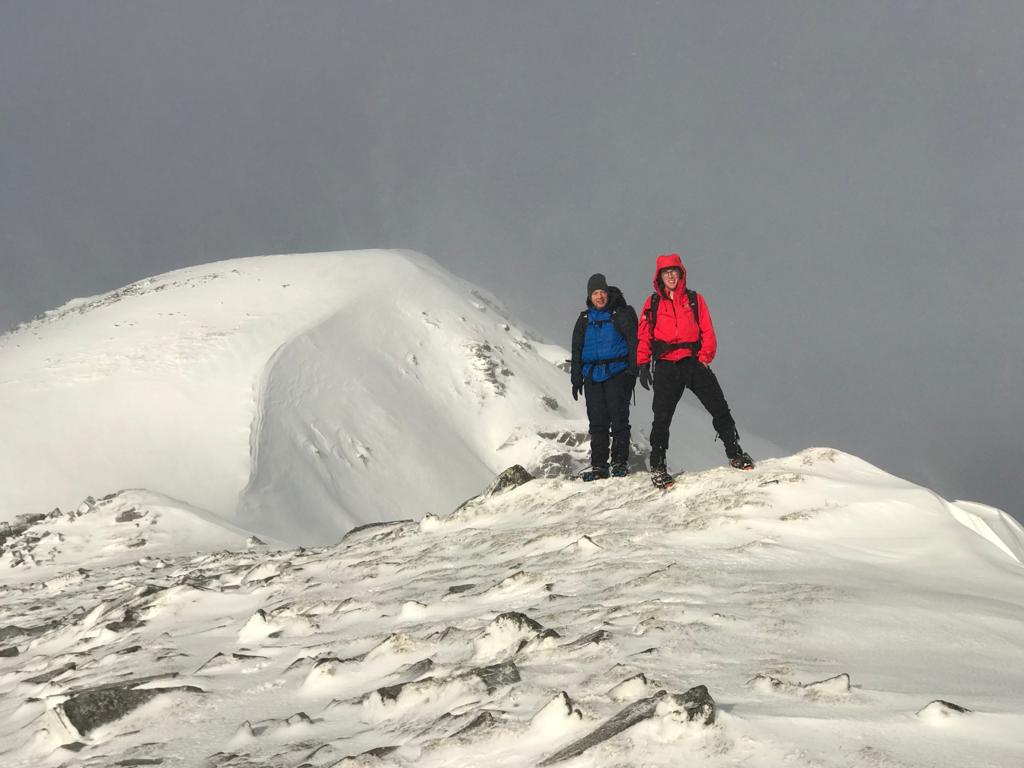 On the way, however, they arrived at a heavily iced and quite exposed scramble, and after some investigation, decided that it was just too risky and decided to call it a day. 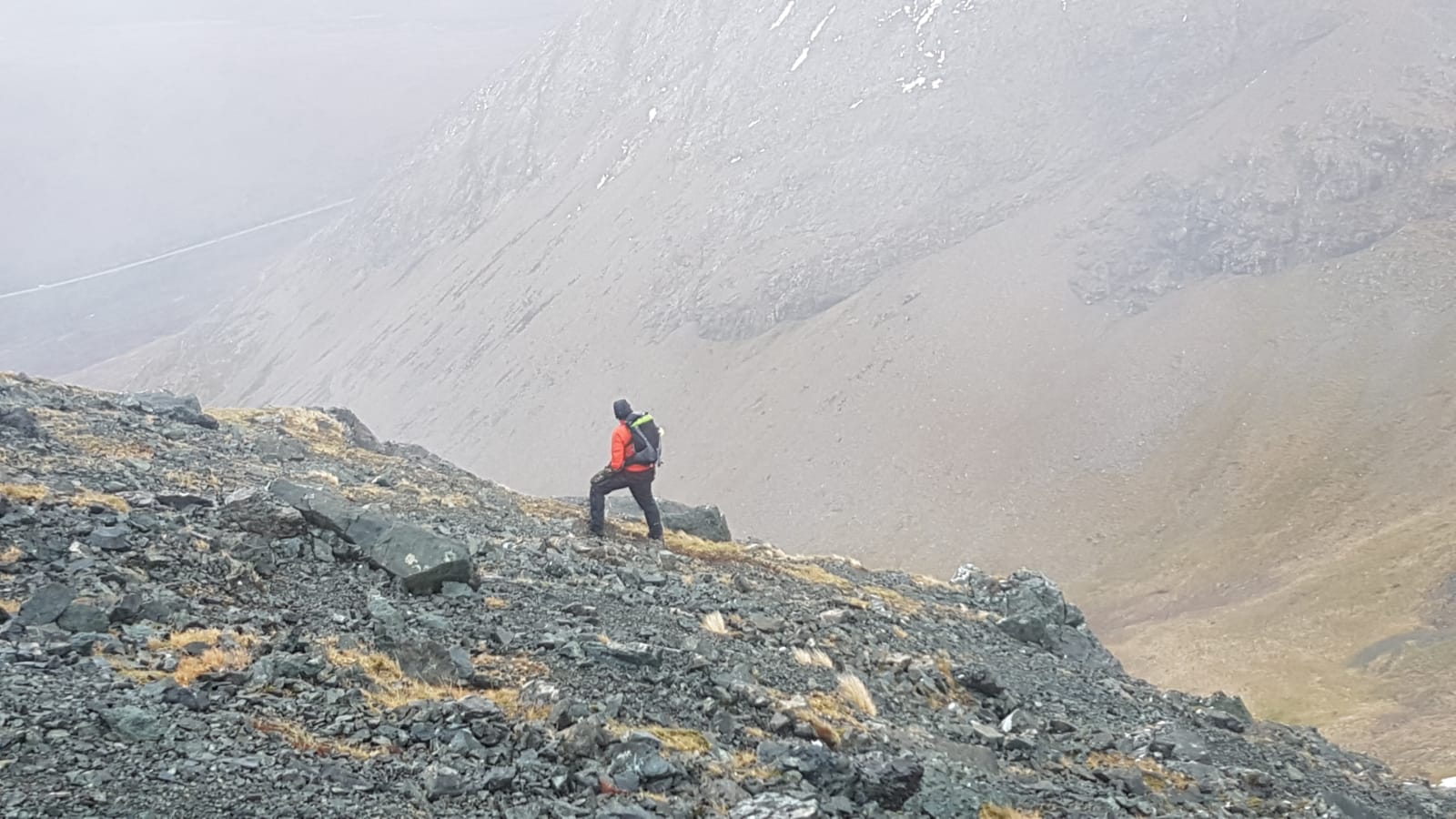 Chris descends. A87 in the background.


The descent for me was straightforward enough, though the snow conditions varied widely, from hard ice under a dusting of snow, to thigh-deep drifts, and made for relatively slow going, given that I needed to take care not to fall following recent surgery.

Taking the same track I'd walked up the glen on, I was back at the car at about 15.30, and 10 minutes later was examining the artifacts displayed in a nearby establishment of cultural, historical and architectural interest (sadly the choice of mineral water was severely limited). 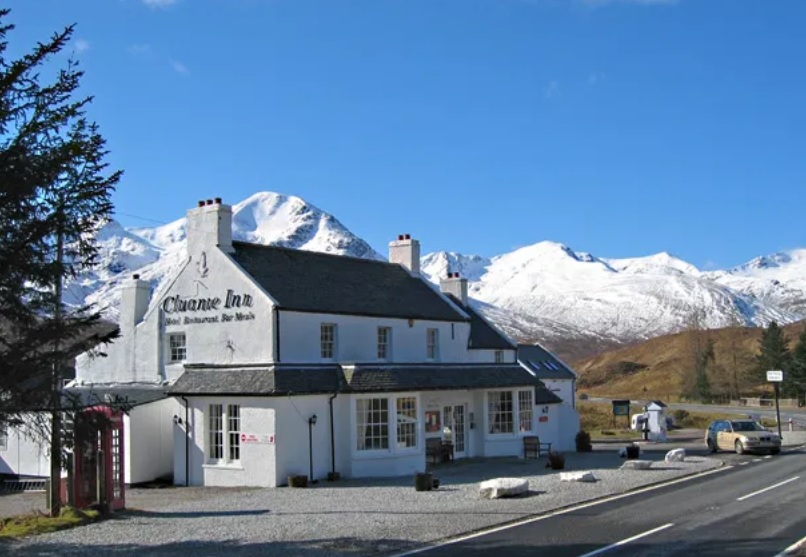 The other three arrived from their rather longer and more strenuous walk about three quarters of an hour later. 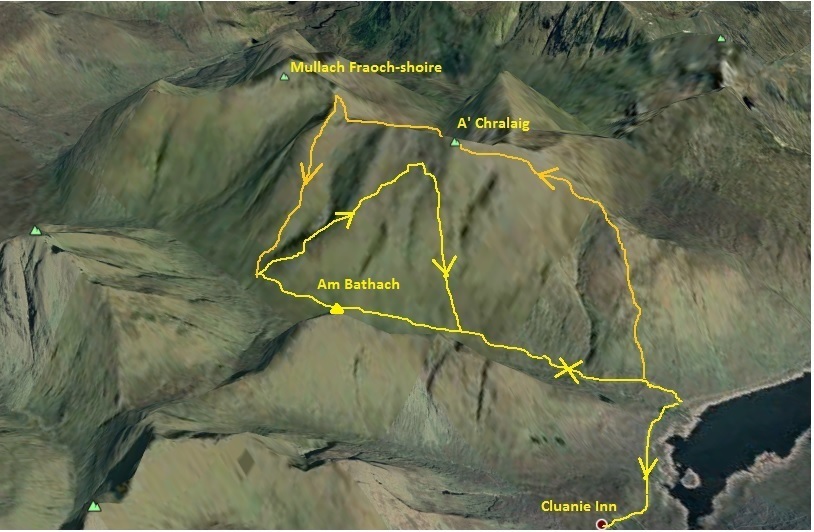 Re: A' Chraeliag - but not quite for one of us

Great views of the Glen and the ridge! shame you couldn't make it, but better so than risking anything!