The Cobbler on a perfect winter's day

The Cobbler on a perfect winter's day


Either Jenko or Chris - I can't remember which now - had the brilliant idea of changing plans a bit and travelling to Arrochar from Glen Sheil on the Saturday evening, so that we could start early on the Sunday morning - necessary so that Jenko could catch his plane late Sunday afternoon - without us having to get up at 5.00am.

So that's what we did.

The idea was to do at least the Cobbler, and depending on time and conditions, one of the Munros.

This was the route we ended up taking. Not very origina!

Three musketeers, minus D'Artagnan (the photographer) as we set off around 9.00. 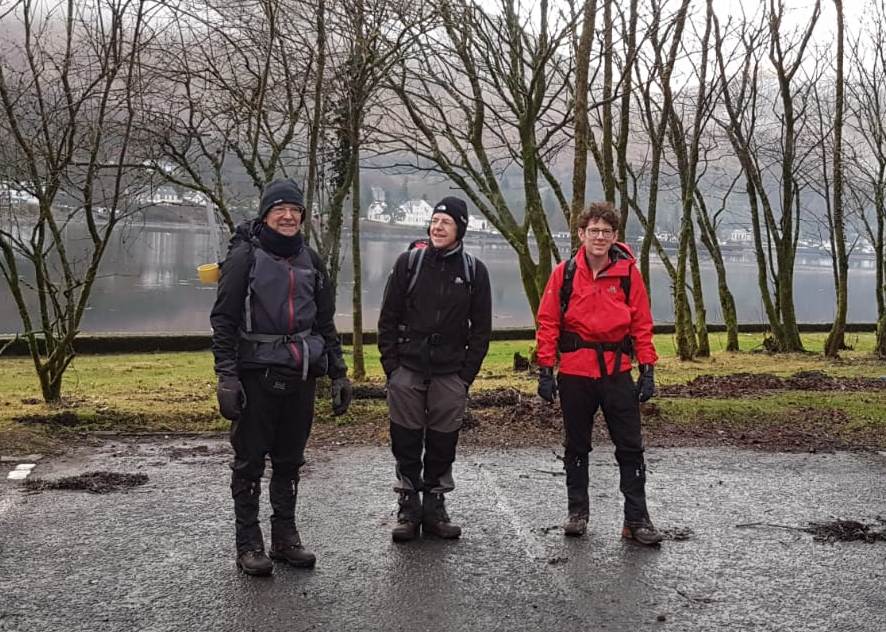 Chris and Jenko were now thinking in terms of adding a Munro to The Cobbler, but I knew that would be too much for me and my ticker in its current state, and Dr Frank had decided to accompany me on a slower walk. And it was slower - soberingly so when a guy who must have been over 80 if he was a day, marched past us with barely raised respiration rate

It was a really superb morning. This is looking back ESE towards Ben Lomond from about half-way up the zig-zag path through the forestry. 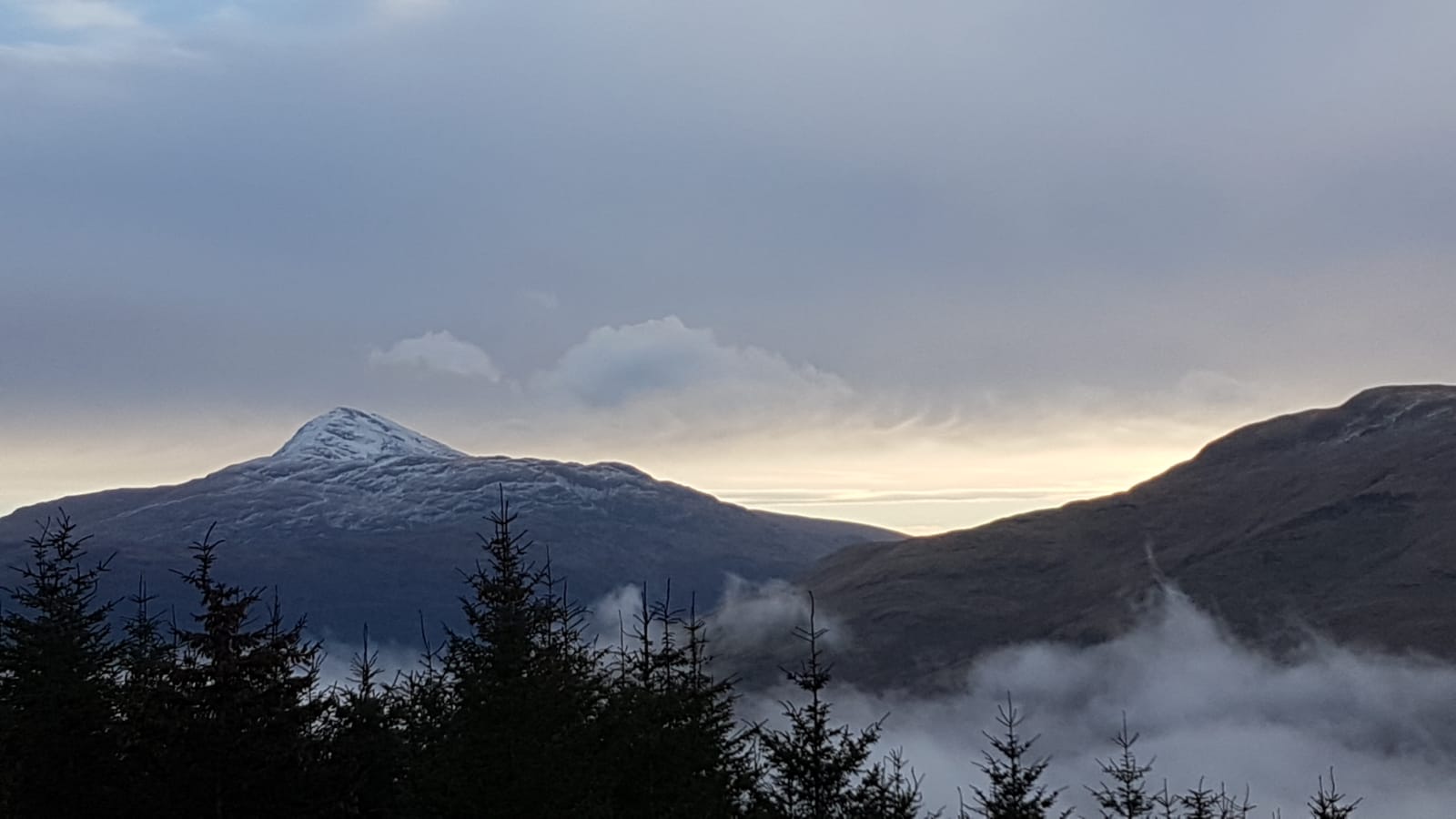 And this pretty well the same, but in pano format, and taken a bit later on after the path emerges from the forestry.

Generally stunning views all round... 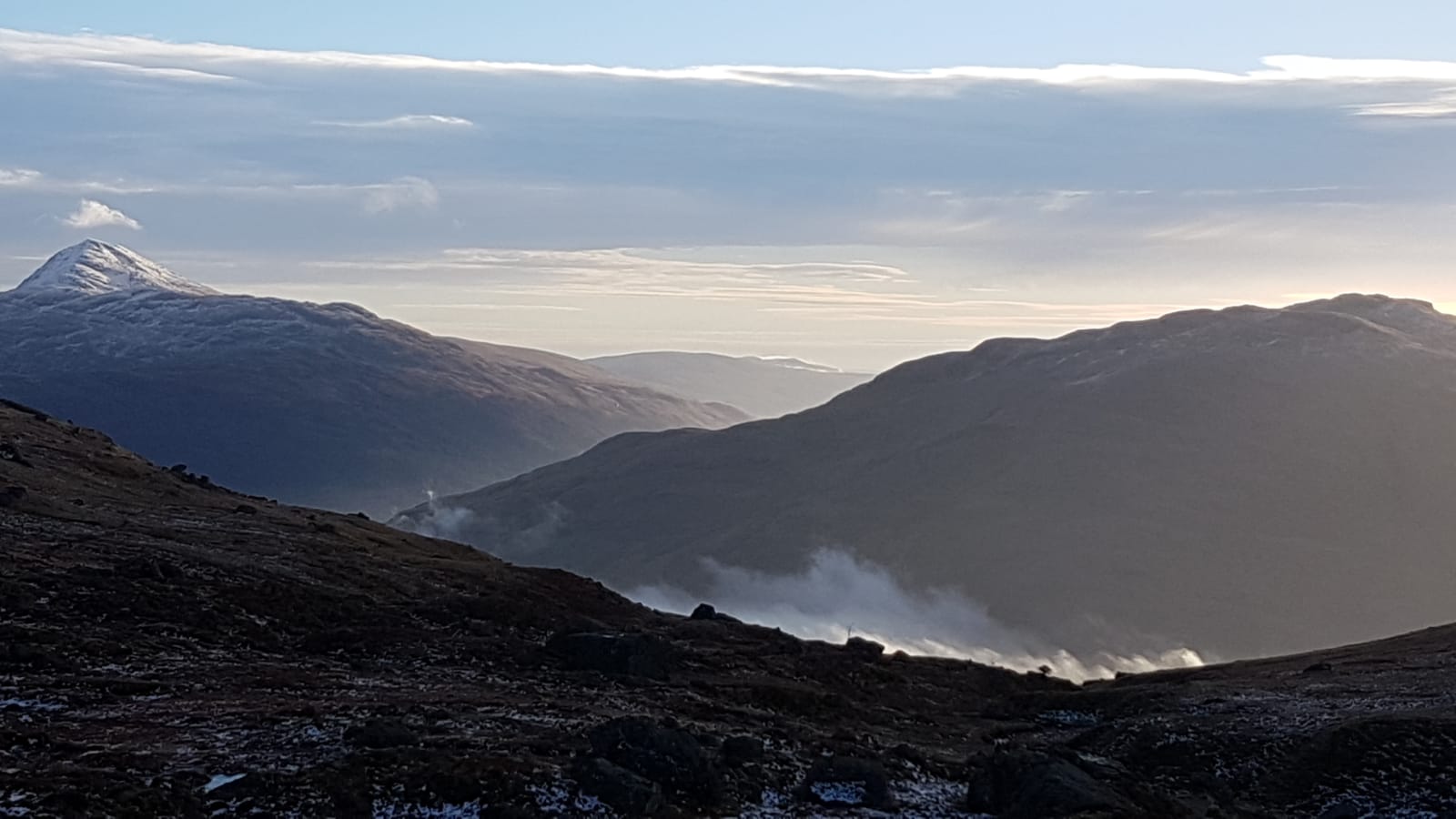 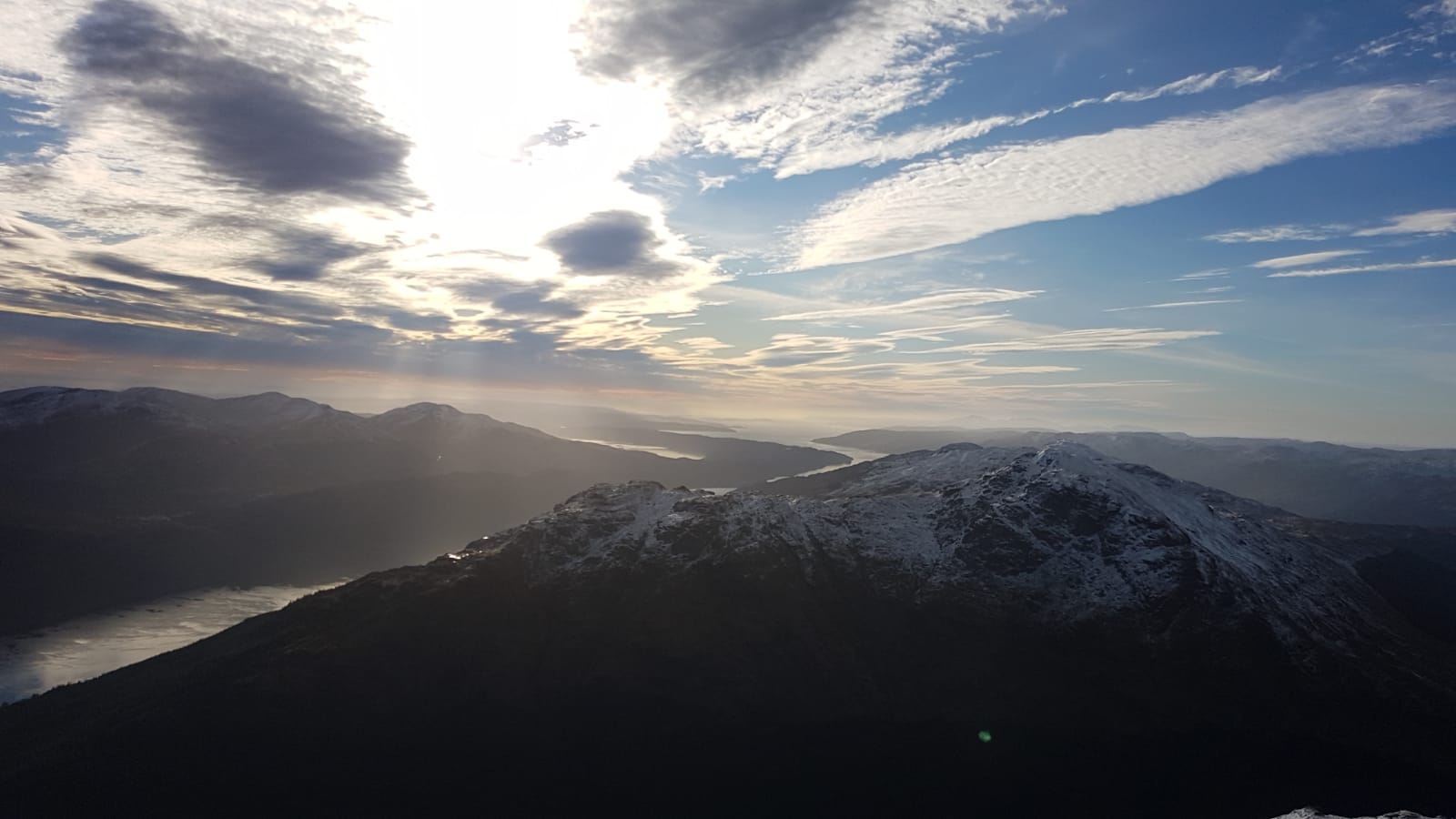 As we crested a small hump in the track, this is what greeted us. Truly: the overused word "iconic" really does apply to this beauty; and most especially in winter garb. Cue: big grins all round 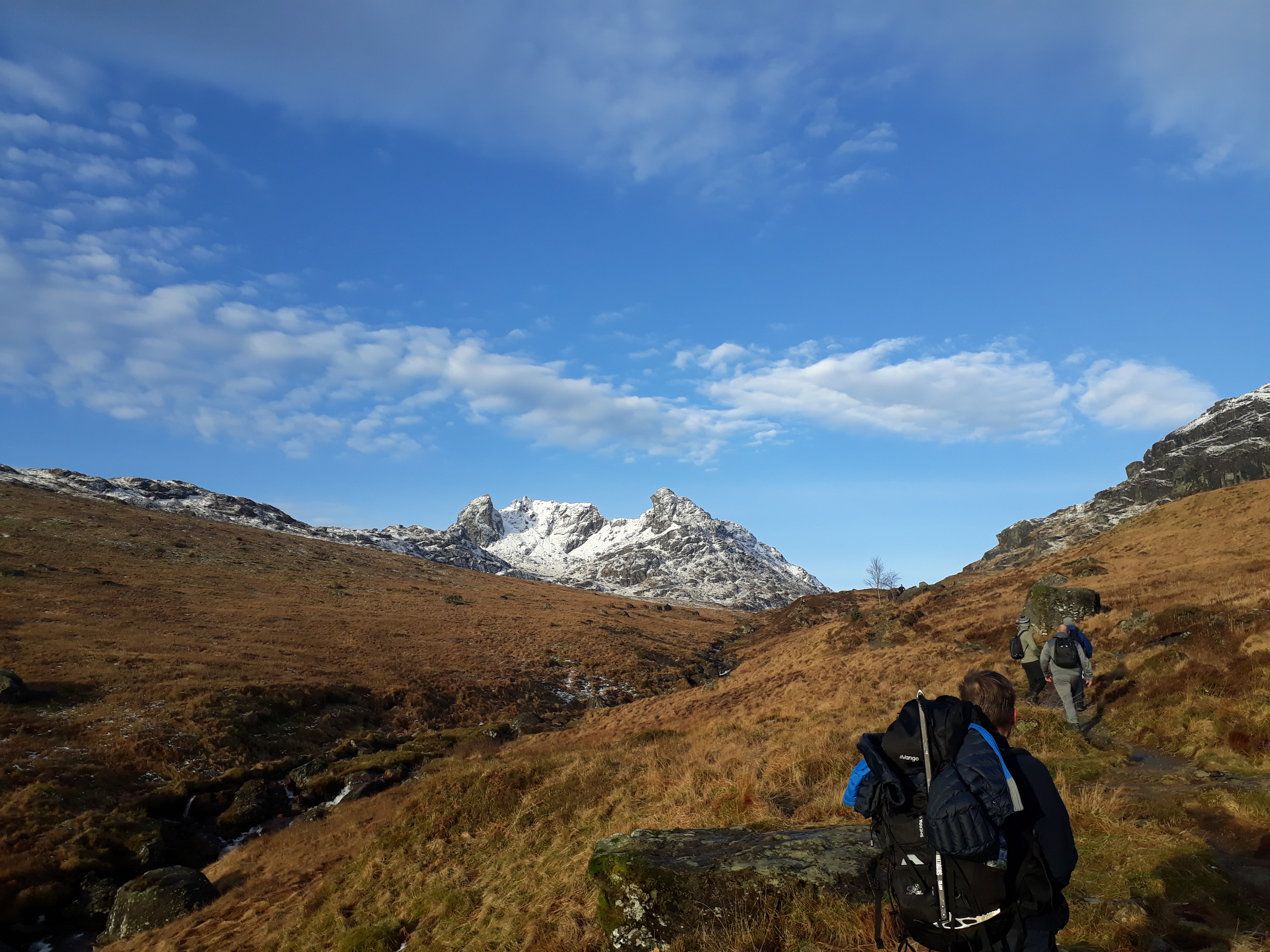 There was a goodly number of folk taking full advantage of the superb weather, but one can't really quarrel with wanting to enjoy something like this.

To the right of the path, Beinn Narnain. 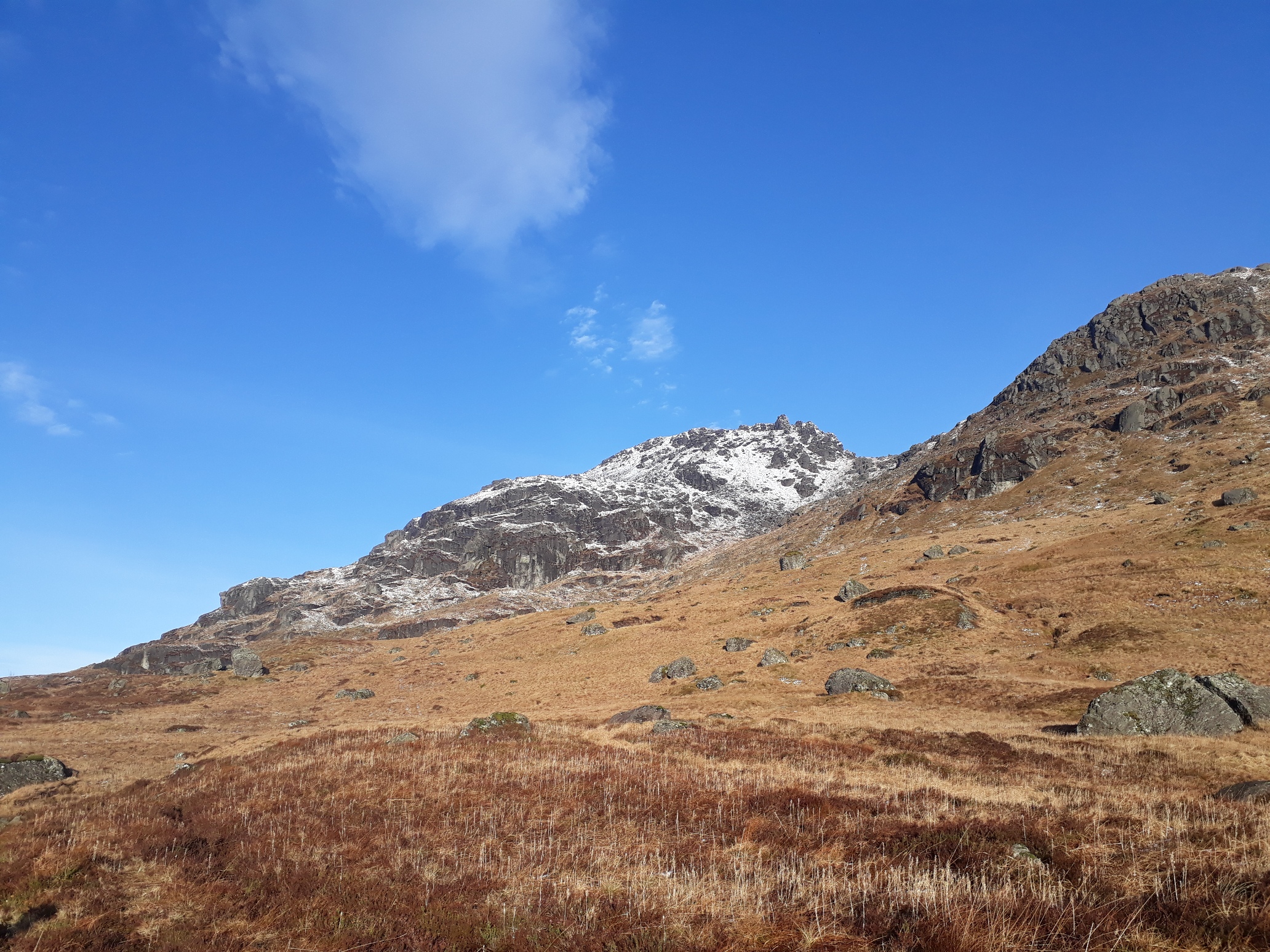 But really all eyes have to be for this fellah. 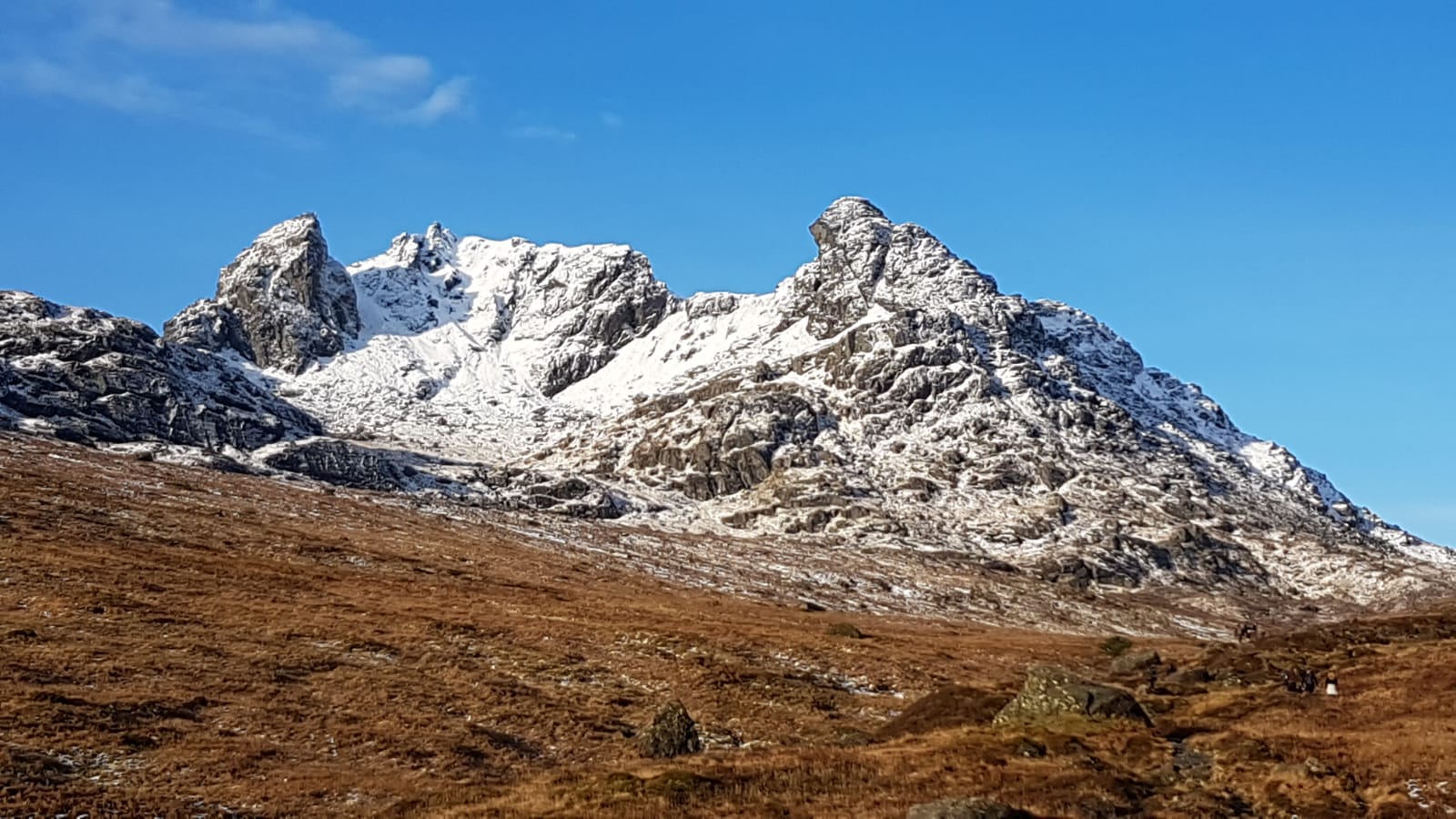 Looking back towards Arrochar again, with Ben Lomond on the skyline in the background to the left. Shortly after this we took the left fork that leads up the south east face of the mountain. 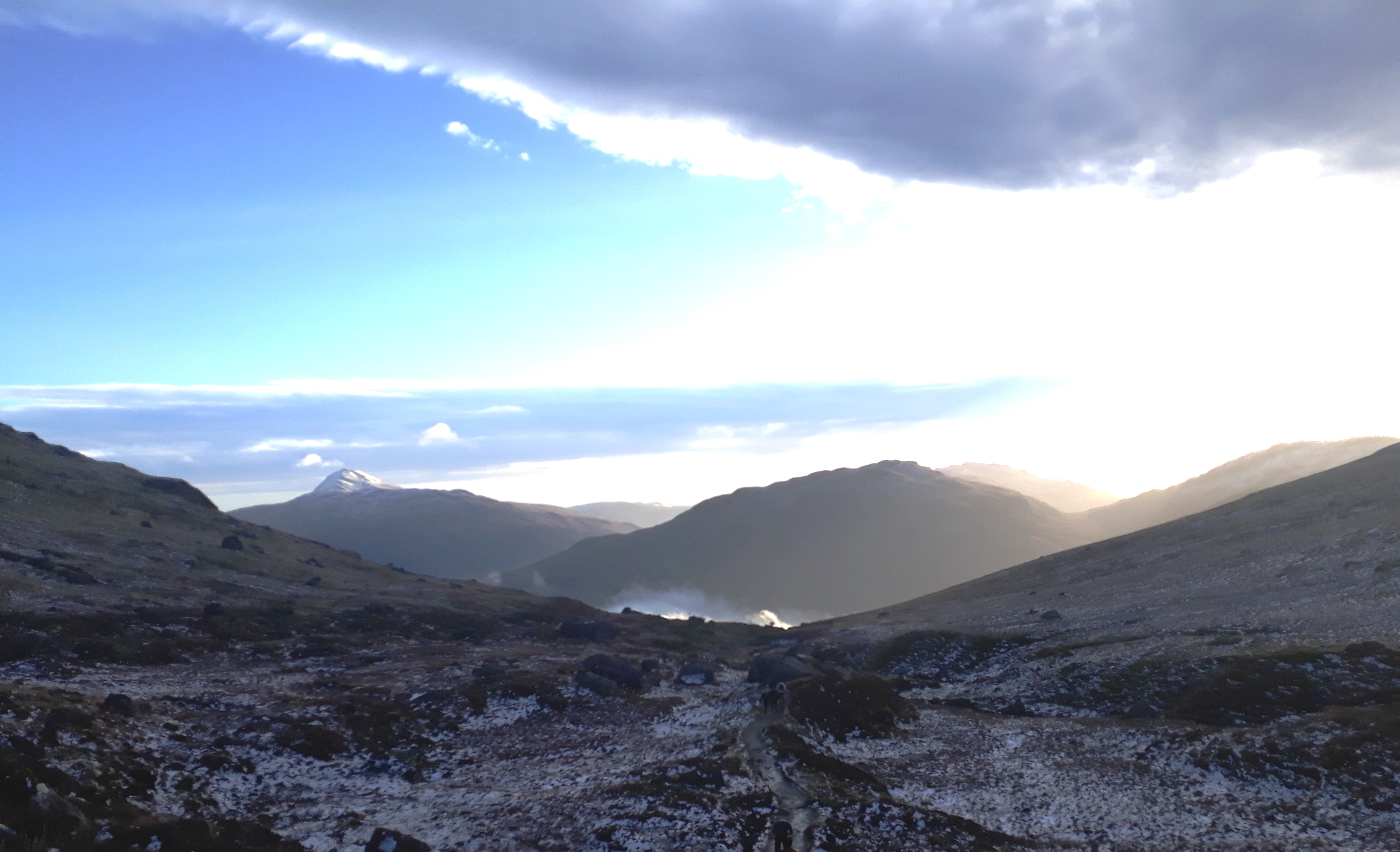 The North Peak ahead, the track leading up its west side. The higher we ascended, the icier the path became, and we made a note to don crampons for the descent. 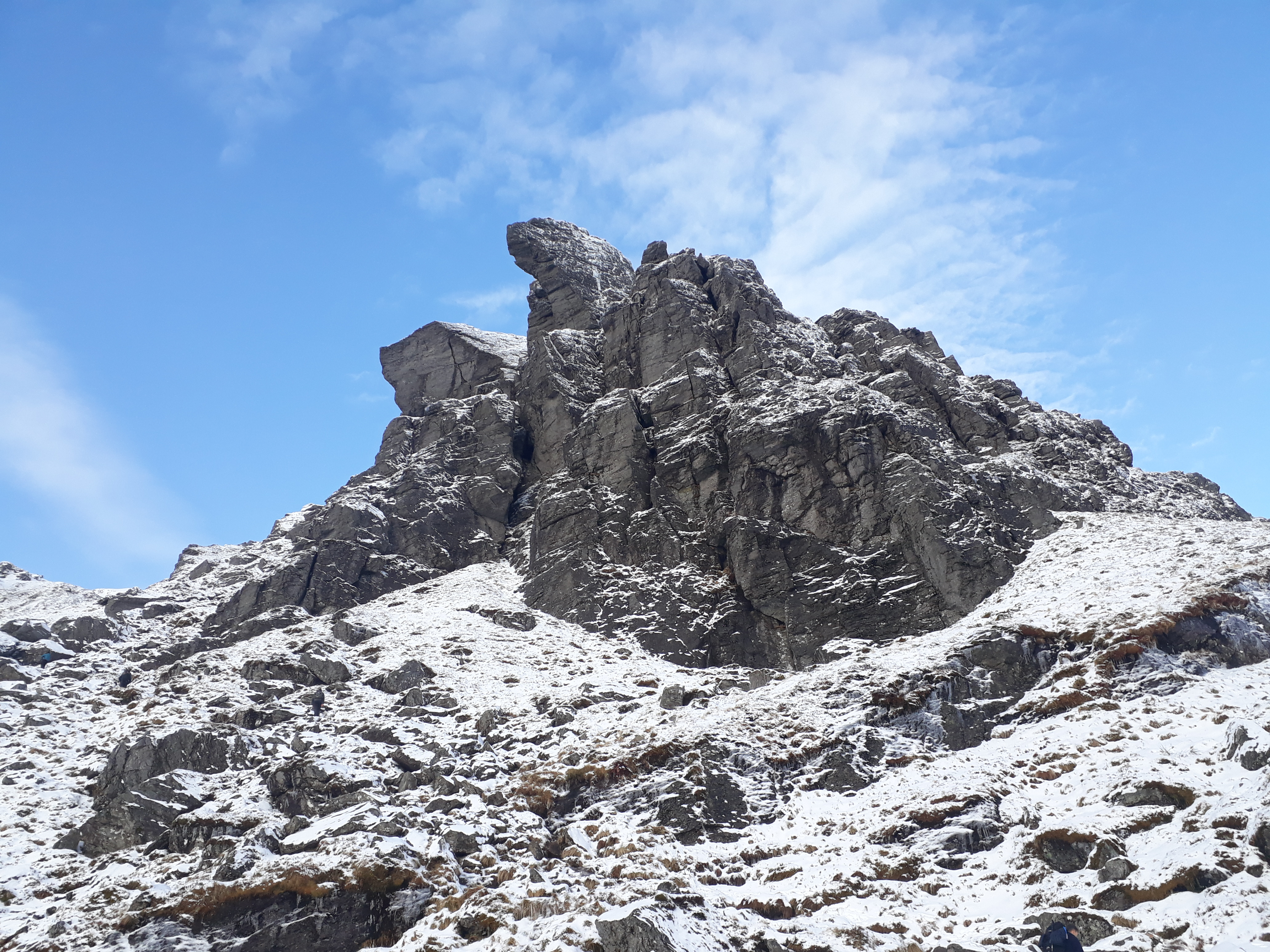 So far we hadn't seen Chris and Jenko again, and subsequent events suggested that they must already have been on the North summit by this time. 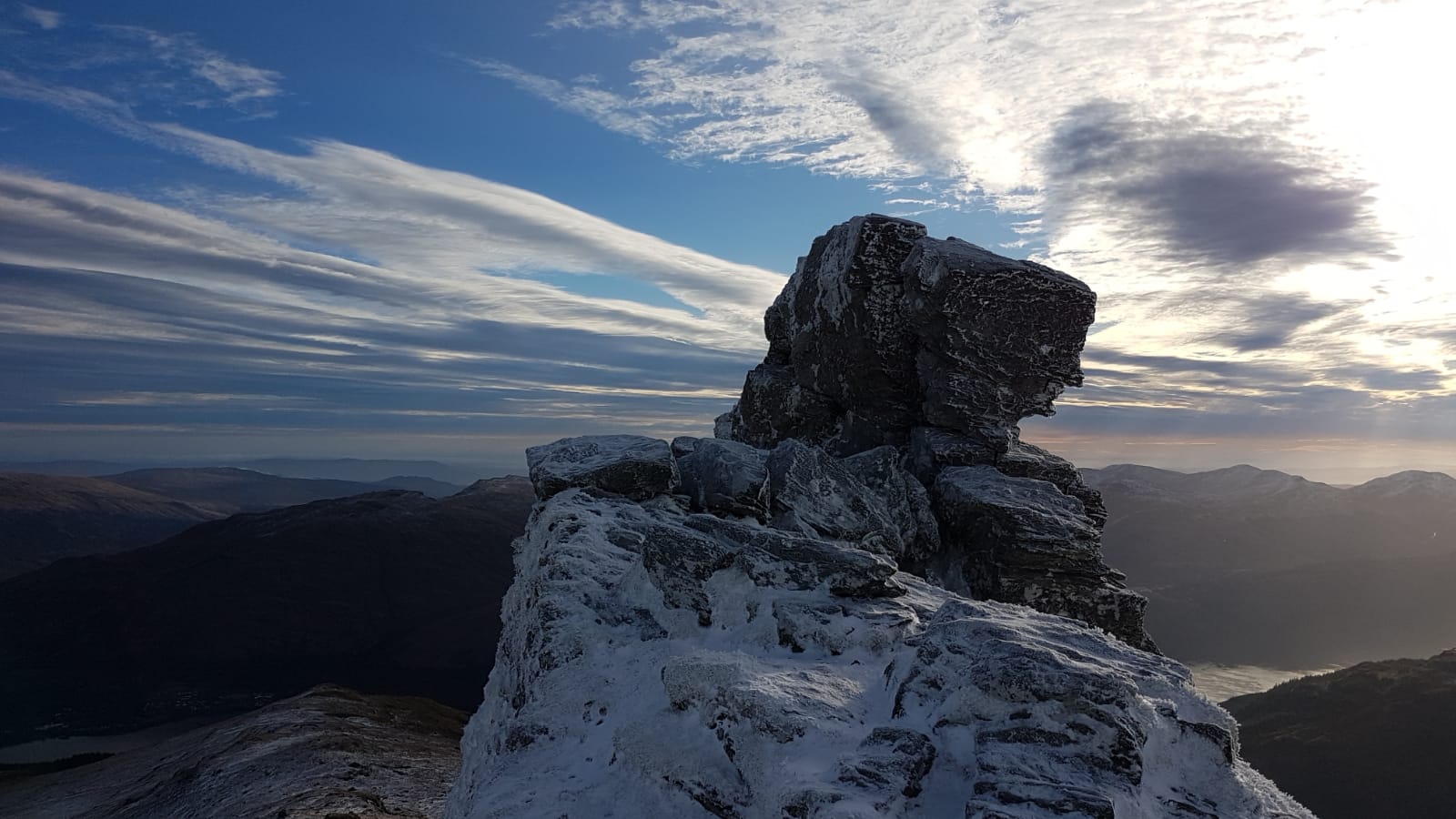 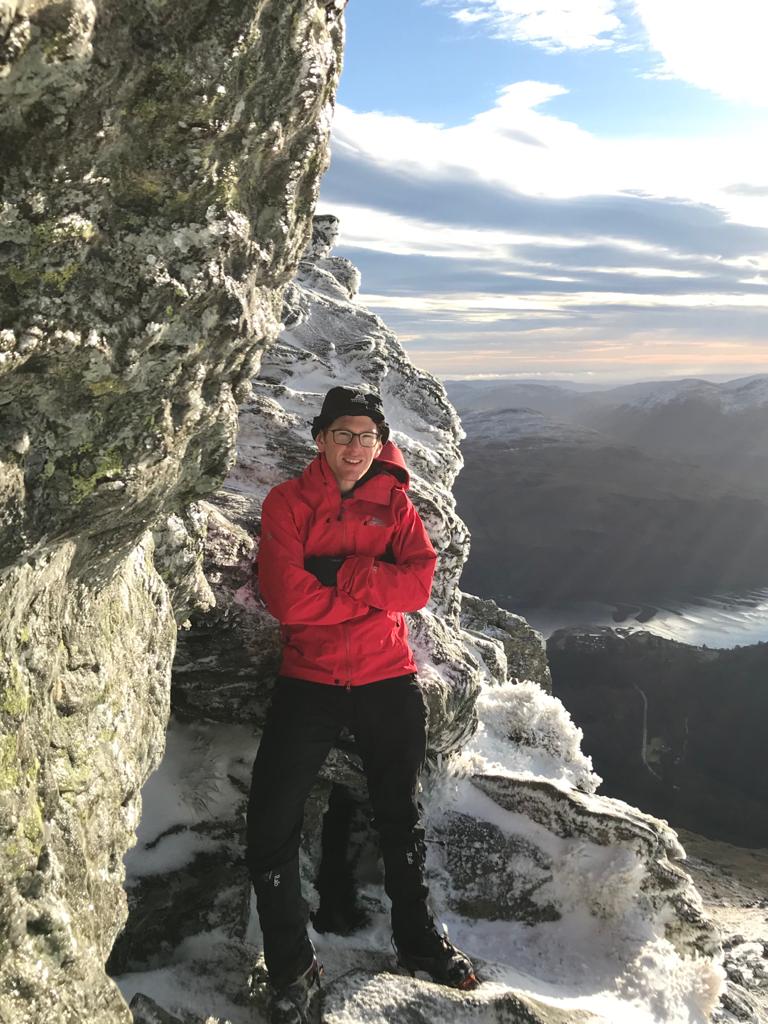 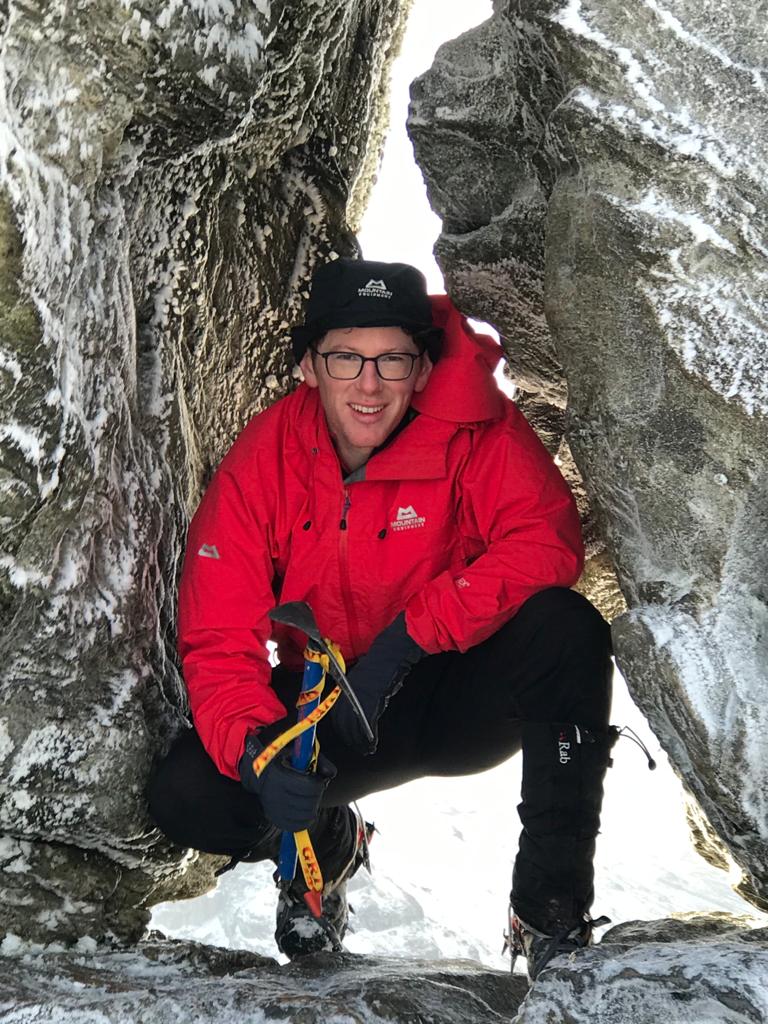 Meanwhile Dr Frank and I continued slowly to ascend the last stretch. This pic is looking south along the line of the cliffs.

Views from the summit were wonderful, but warm it was not, and no-one hung around for very long 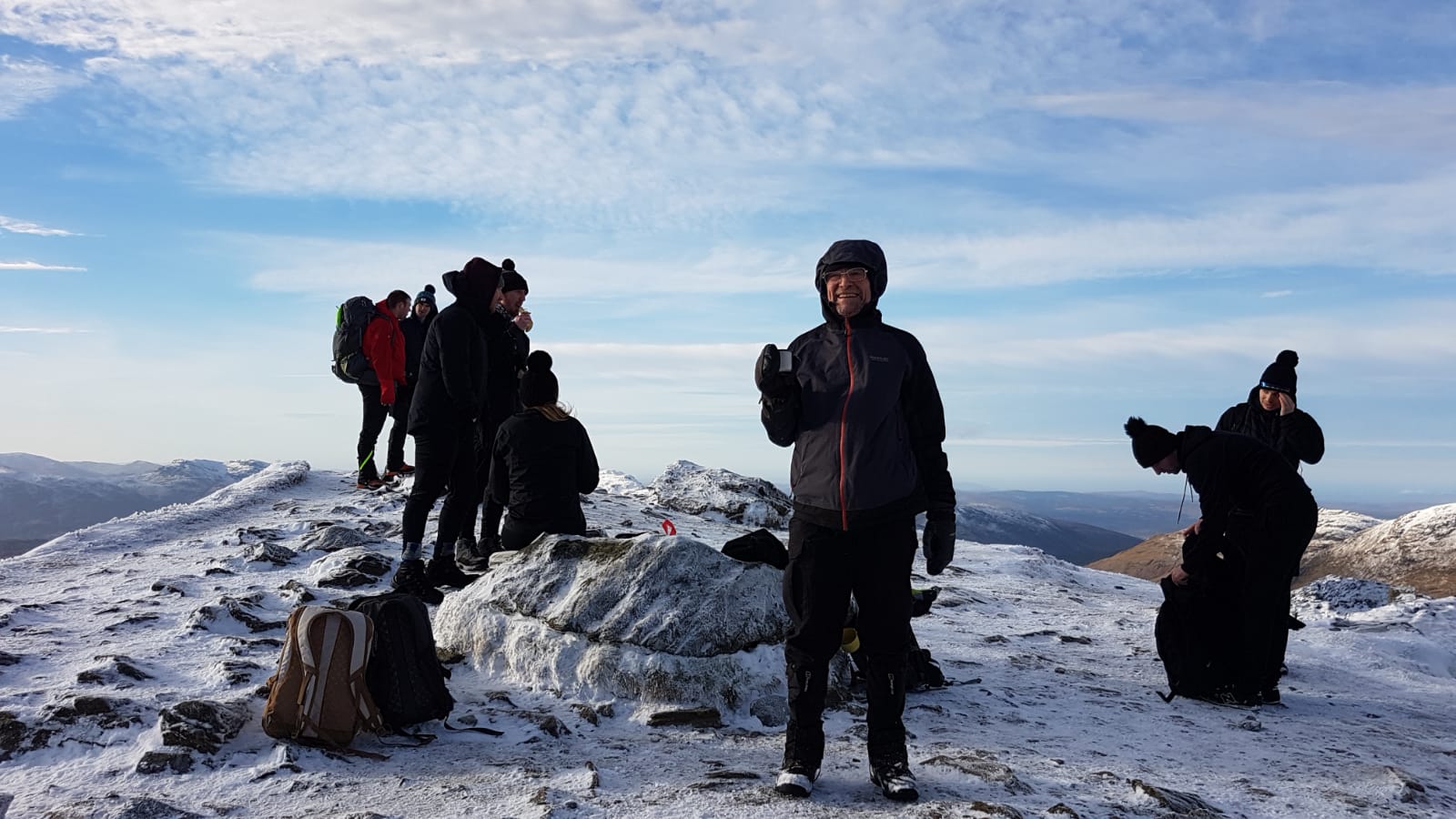 So we got our axes out and crampons on, first heading to the edge of cliff to take a peek over it.

And who did we see but Chris and Jenko descending... 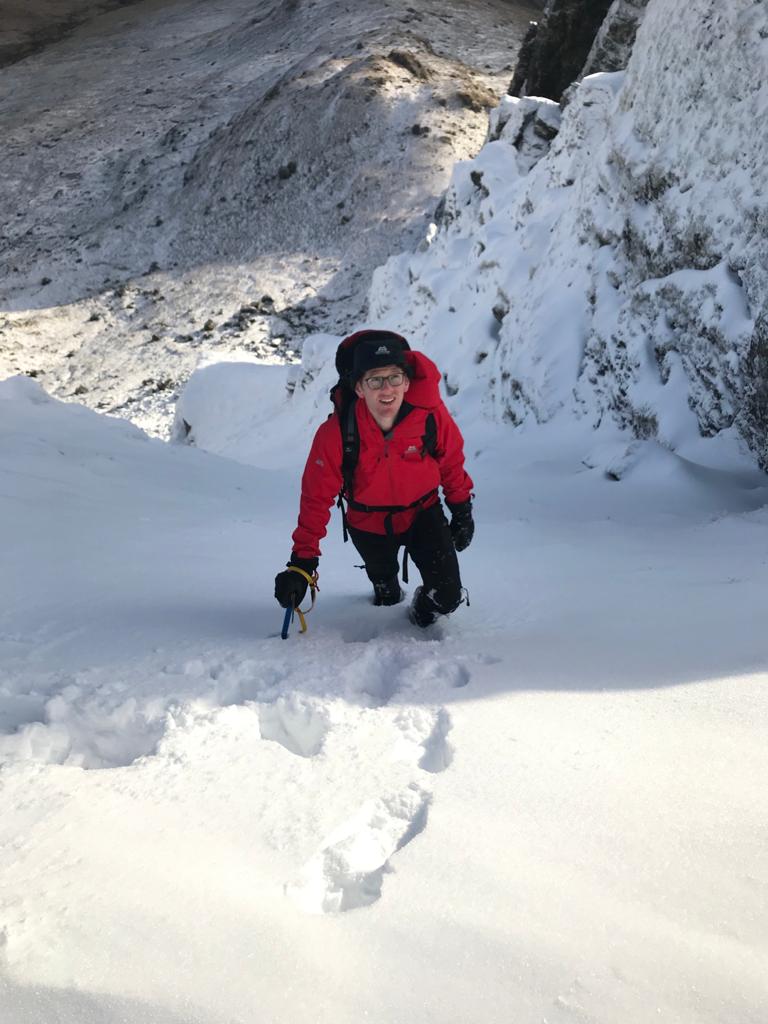 It looked like a very attractive proposition, but for me against doctor's orders, so we reluctantly took the back track behind the North Peak.

I think Chris must have taken this pic just a little later, looking back towards the gully they'd descended. 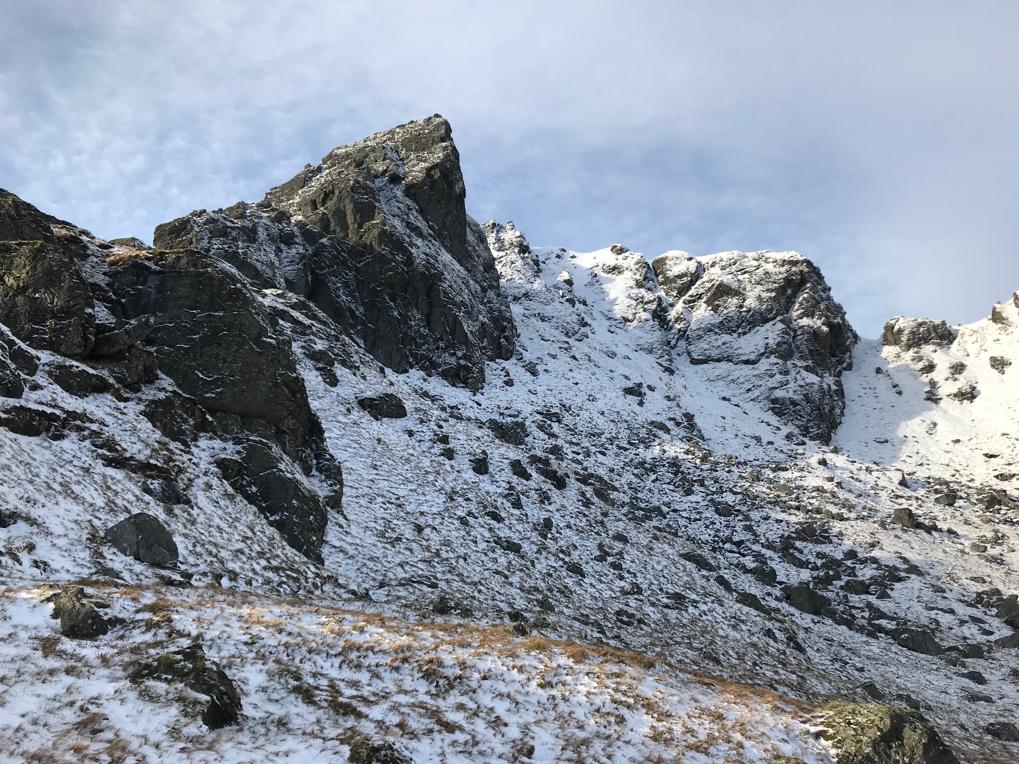 We arrived back at the car at almost precisely the planned time - 14.00. Unfortunately there was no time for even a brief sojourn at the local establishment of historical, cultural and architectural distinction.... 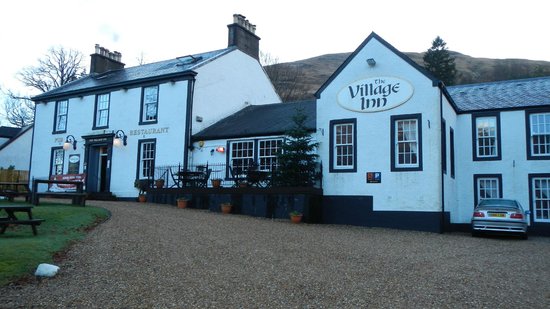 Just enough time to get Jenko to the airport without being in too much of a flap.

All in all, especially in the light of the miserable forecast beforehand, an excellent 4 days in great company. 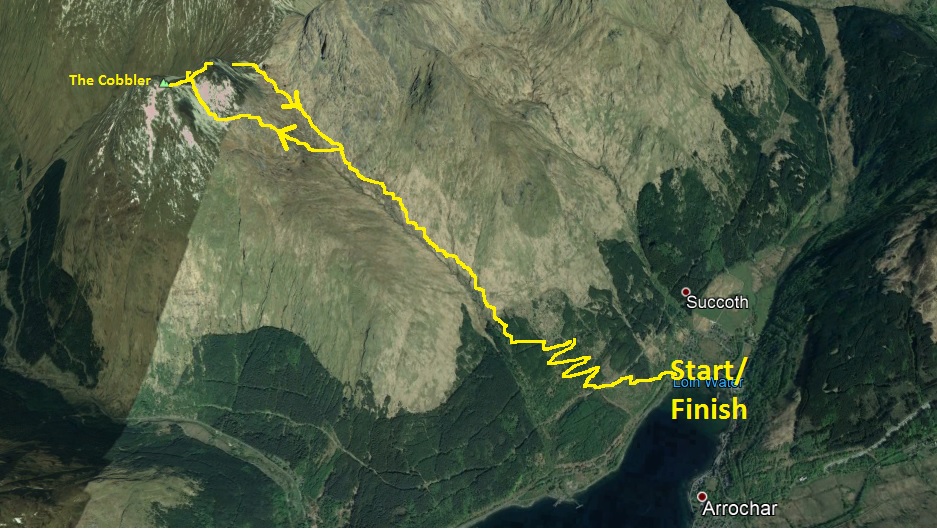 Liked reading the four reports, thanks, and sound health!

Yes get well soon Alteknacker, good to see you are still heading out and taking the Doc with you anyway!

It's the classic route, i've yet to do it that way so I enjoyed your pics and write up. Very jealous at the snowy gulley fun, looks like you had a great day for it!

Grisu wrote:Liked reading the four reports, thanks, and sound health!

Thanks. Not sure I'll ever get back to big expeditions, but to be able to do anything is a blessing, so I'm pretty content - since according to the cardio specialist, I shouldn't be able to walk more than about 15 steps!!!

Chris Mac wrote:Yes get well soon Alteknacker, good to see you are still heading out and taking the Doc with you anyway!

It's the classic route, I've yet to do it that way so I enjoyed your pics and write up. Very jealous at the snowy gulley fun, looks like you had a great day for it!

Thanks for the good wishes Chris. Yep, good to have medical assistance close to hand - all three of the musketeers are medics!
And, yes, it was a perfect day for it. That's one winter and one summer ascent in superb conditions - lucky or what??!!??