At last, at last. A glimpse of hope for Sunday weather: windy and cold, but dry and sunny-ish for the north-east of Scotland. I had a quick look at our bagging map for Sub'2000 Marylins, thinking we could combine several short walks into a "Weasel-style" bagging trip. Kevin often says that some hills are just too short and pointless to be bothered with, but I managed to convince him to give the Aberdeenshire Subs a chance. I was desperate for a day outside, even if I was going to be pushed from pillar to post, or should I say, from trigpoint to cairn!

I prepared a list of five possible targets in the area of Elgin and Keith. In the end, we managed four of them, leaving the fifth one for another bagging spree. All hills were fairly simple, mostly on paths/ATV tracks, only one required some heather bashing (and it was due to Kevin's route choice). Weather was windy and quite cold, but I didn't really care. I was in such a state of mind that I desperately needed to climb something, even if it was a 30min march up a windfarm track

Track_BROWN MUIR 5-6KM.gpx Open full screen  NB: Walkhighlands is not responsible for the accuracy of gpx files in users posts
Several WH reports are available for this one, all following the same approach to the summit of Brown Muir, from Moniemouies farm. We parked at the end of public road, in the middle of a pig farm. We prepared for the quick walk (decided to take only one rucksack) and started up the road to the farm, surrounded by loud oinking Past the farm the track continues all the way to the summit which has a communication mast, visible from the distance. It was early morning and after a frosty night, all the local bog was frozen:

Beware of the killer bees! 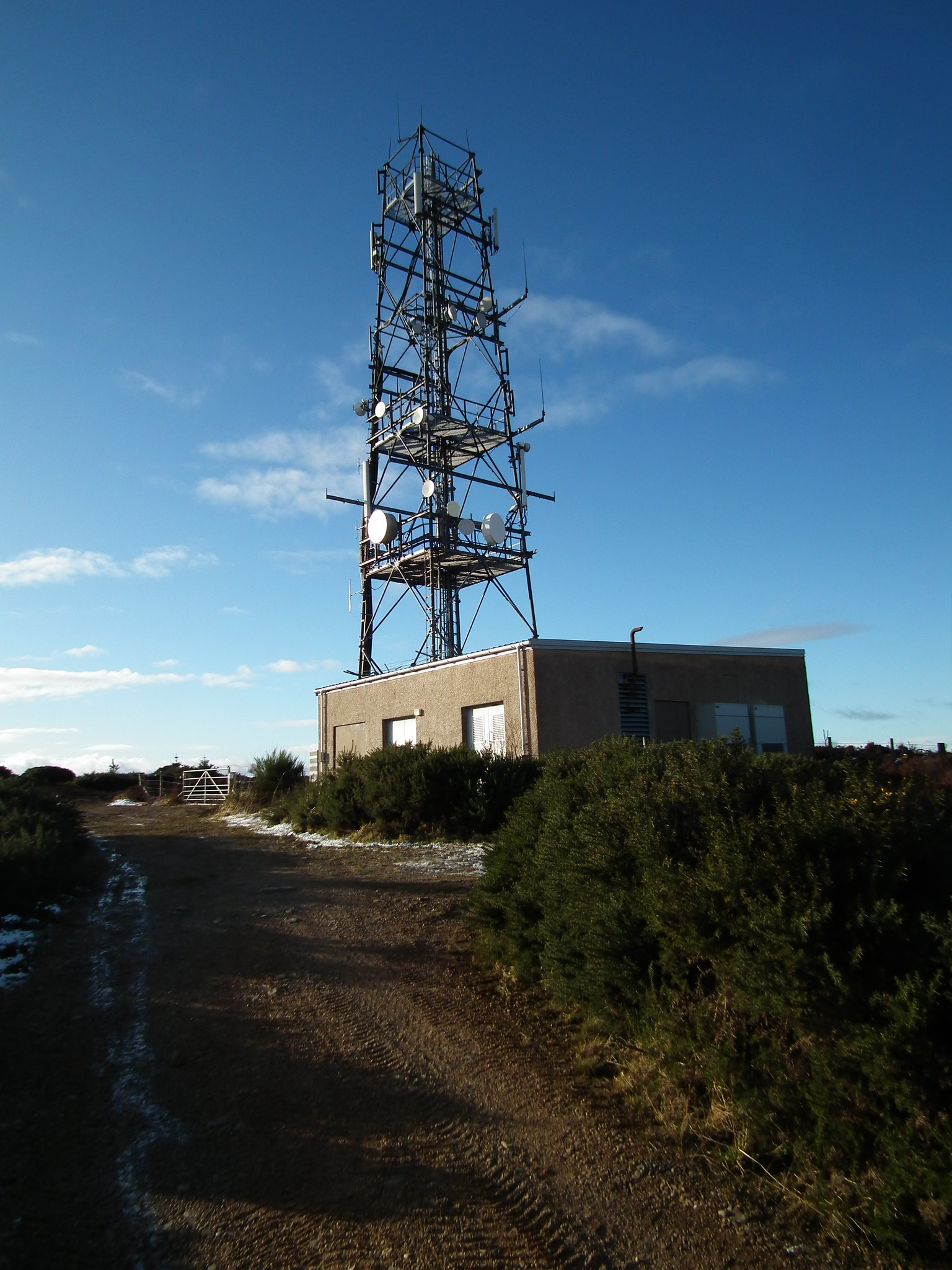 2020-02-23 keith subs 018 by Ewa Dalziel, on Flickr
Next to the mast we found a trig point, topped with a metal cap. Hidden under the cap was a box with a visitors book. Despite the wind playing havoc with the pages of the notebook, I managed to scribe "Black Panther was here!!!" 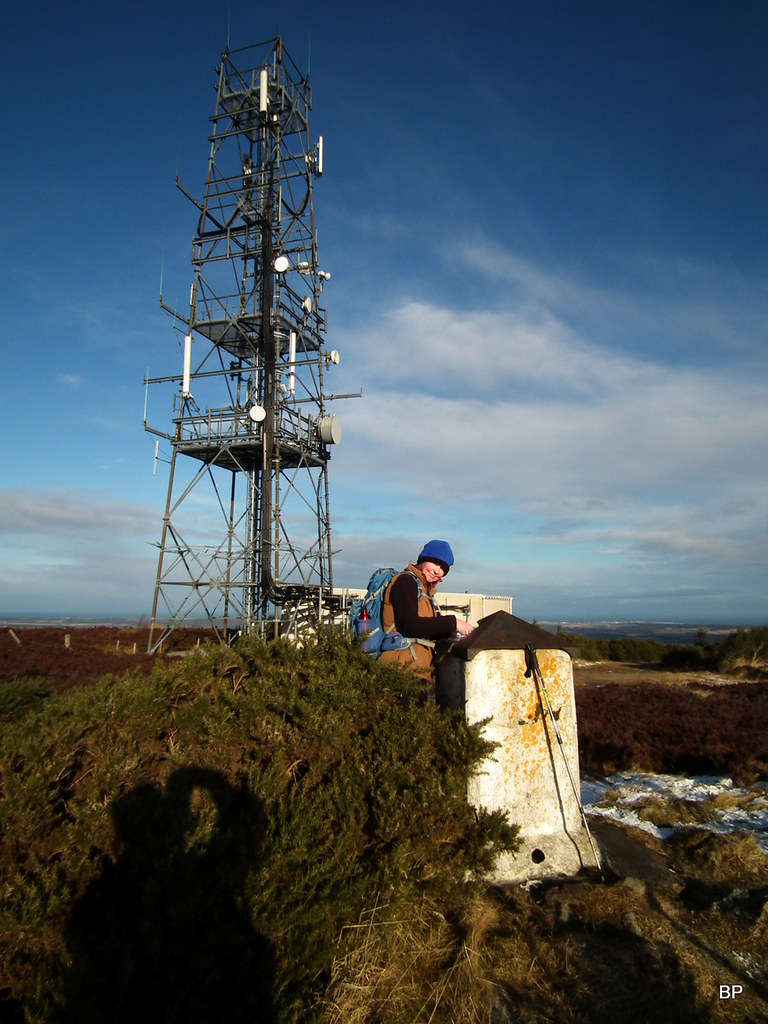 ...and a few snaps of the surrounding views, snowy Ben Rinnes in particular:

On the way back down: Enjoyable views and blue sky at last after weeks of dark cloud. Well, the wind was gusty, but that was only a small inconvenience.

2. Knock Hill
3.6km
264m ascent
1hr 30 min
The second hill today was Knock Hill, just north of Keith. Kevin sait it must be a good one if it has two Walkhighlands routes! We picked the western approach, for practical reasons, but of course my husband had to go off piste and drag me through knee deep heather on the way up... If you want to avoid scratchy vegetation, stick to the WH line

Track_KNOCK HILL 3-7KM.gpx Open full screen  NB: Walkhighlands is not responsible for the accuracy of gpx files in users posts
We parked in a small car park near Knockbog... ...and walked up the road past a farm (currently for sale, if anybody interested?...), where we found a waymarked path through the woods. A pleasant stroll so far: 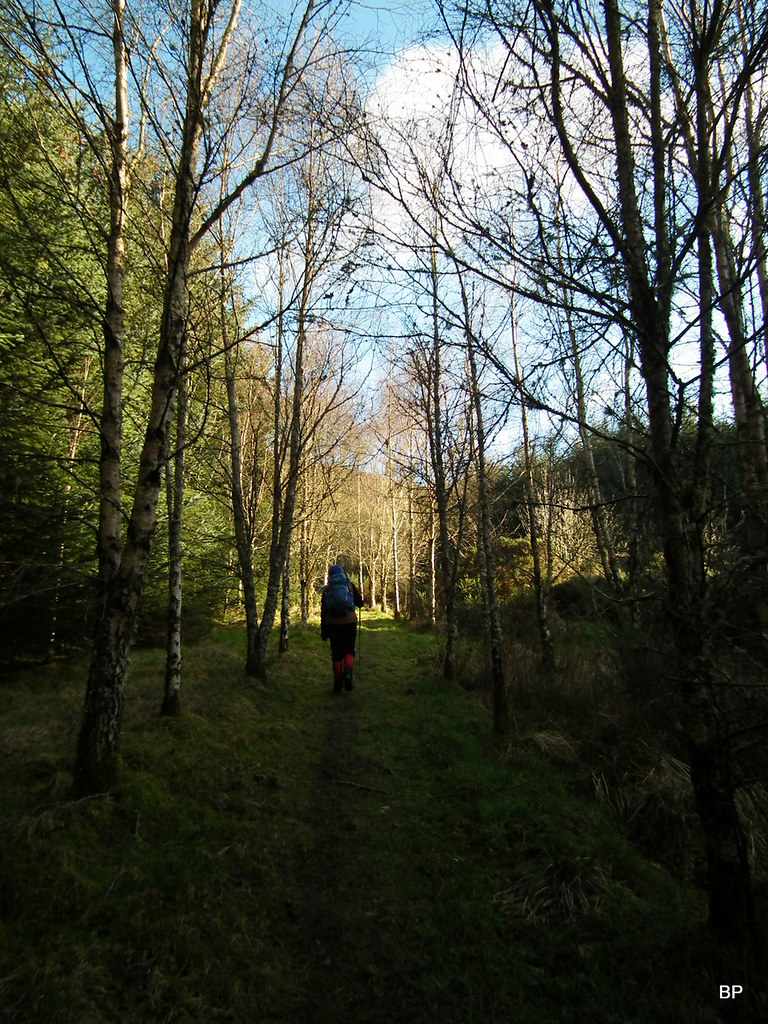 2020-02-23 keith subs 040 by Ewa Dalziel, on Flickr
The path turned right and soon we emerged onto the open hillside. Kevin started moaning that the path was muddy (well, it was as a matter of fact!) and he'd rather go straight up than contour around to the southern side of the hill. I noticed that I had dropped my gloves so I went a few meters back to find them. By the time I returned he was already marching up the overgrown slopes, so I had no choice but to chase him ...but higher up, it's bumpy and overgrown with deep heather. A good workout for any hillwalker, especially after weeks off the steep ground. The cloud was drifting in from the south-west and the wind didn't show any signs of dropping, but we just needed that harder push to remind us, we have to prepare for the summer season.
Kevin, are you sure it's the best way up?... After about 100m of heather bashing, we emerged on less steep ground with lower vegetation, which would be qualified as pleasant strolling if it wasn't for the gusty wind. Views were nice though We staggered to the summit, where I hid behind the cairn and let Kevin take the credits for photo taking... most of his snaps were tilted and needed editing

Looking east past the trig point: Bennachie on the horizon:

In less windy conditions it would be a nice spot to have lunch and enjoy the views of Aberdeenshire, but we could hardly stand up so gave up on the idea of summit picnic

Our return route followed the WH line. There is some pathless terrain to cover but generally, less overgrown and less scratchy than our "off piste" version On the way down, we were forced to practice some bog-hopping as the path through the gorse required: 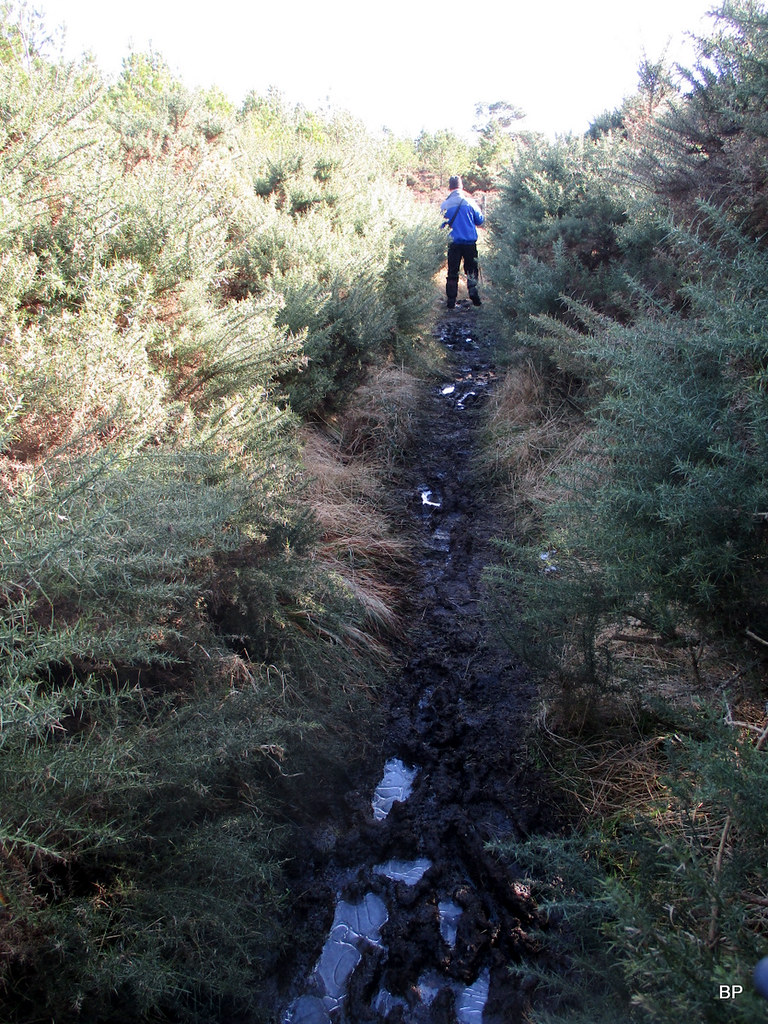 2020-02-23 keith subs 121 by Ewa Dalziel, on Flickr
Back in the car, we had something to eat and a cuppa, before driving the short distance to our third target of the day.

3. Meikle Balloch
3.5km
166m ascent
55 min
You can make this hill as easy or as difficult as you want. With time to spare, it is best to do a full traverse (again, as WH route suggests), but we wanted to climb one more Sub after this, so we opted for a quicker version, the "green trail" as shown on the display board in the car park.

Track_MEIKLE BALLOH 3-5KM.gpx Open full screen  NB: Walkhighlands is not responsible for the accuracy of gpx files in users posts
We took the shortest route up from the car park, a path through the woods: It really would be difficult to get lost here, soon we were up in the open and walking towards the summit. It's less than 150m of ascent to the top. Piece of cake Looking back east to Knock Hill:

Snow-covered Coryhabbie and Cooks Cairn (I think) plus wind turbines:

A man on the crossroads: Meikle Balloch is lower than Knock Hill so wind here wasn't as bad but the sunny weather gave way to grey cloud, so we didn't hang about on the summit for too long. The return path has been recently made and was very easy to follow: 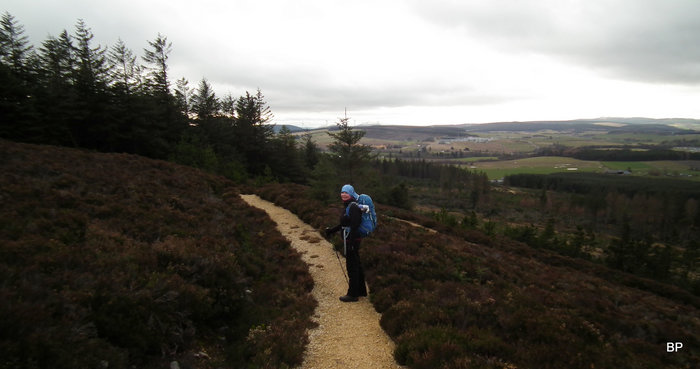 We returned to the car park at half past two and we still had enough time to do another "quickie", so after another cuppa, we drove to Hill of Towie, to "knock off" Knockan. Or should I say, to walk among the turbines?

4. Knockan
3.6km
81m ascent
50 min
If I wanted to call any hill totally pointless, this one would be in for the prize. The summit of Knockan is simply a flat-ish, heather covered lump of ground, not even a good viewpoint as the views are blocked by the neighbouring Ben Aigan.

Track_KNOCKAN 3-6KM.gpx Open full screen  NB: Walkhighlands is not responsible for the accuracy of gpx files in users posts
Parking is limited, but as we knew we were not going to spend much time here, we carefuly parked at the entrance gate to the wind farm:

This is not going to be an exhilarating adventure... Looking down the track from near the summit:

The summit is marked (what a surprise!) with a small cairn. We reached the end of today's bagging spree: 4 Sub'2 Marylins in one day, our total count now 44 (32 for wee Lucy): Not much to say about the last hill, wind turbines everywhere spoiling the views, but I have somehow grown used to them especially in spots like Knockan: a boring heathery lump which nobody would visit if it wasn't on a bagging list!
Wind turbine and Ben Aigan: It might not have been an ambitious day, but we did what we could considering the weather. Better stay safely on the lower hills than risk getting blown off something big and steep.
Despite the modest heights of the four Marylins, they were enjoyable short walks (well, at least the first three) and made us feel alive again. So good to be out and about, scaling heathery slopes and planning new, more ambitious targets. Roll on spring!