After what seemed like an endless stretch of some of the most foul weather in (my Scottish) memory, I was itching to get out. My “2020” walks folder is depressingly thin!

We met in Innerleithen a few minutes after 8:30—I was a bit late—having to stop to fill my skoosher, then again to clean the windscreen manually when the skoosher still wasn’t working (frozen apparently, as it worked fine on the way home), driving into the wrong car park, then driving past the correct one (having to find a place to turn around), then driving obliviously right past Jimmy on the way to the correct one. One of those mornings. And as much as I do love driving through, and walking in the Borders, at the end of the day, there’s just no easy, straight-shot way to get there. The low morning sun blinding me didn’t help.

BUT! Got there in the end, and after kitting up and having a brief confab about the route, we were on our way shortly after 8:45. All the above moaning aside, the very very very good news is that there’s now (all of a sudden, it seems) nearly 12 hours of daylight to play with. Bring on the option of longer travel times and early(ish) starts!

It was a steep grind up to Pirn Craig, and then Kirnie Law, and me poor legs were feeling the effect of many weeks + no’ many hills! But the morning was sunny and bright, and it was pure joy to be out enjoying it. 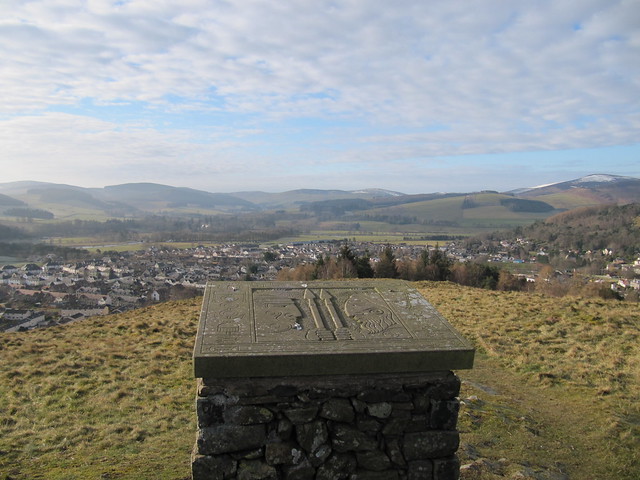 down over Innerleithin from Pirn Craig 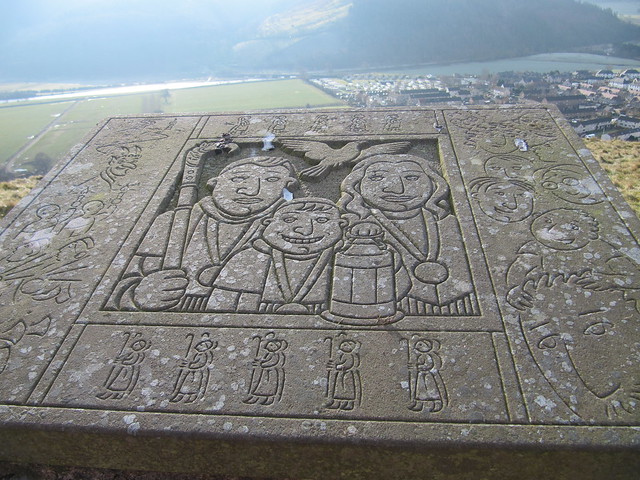 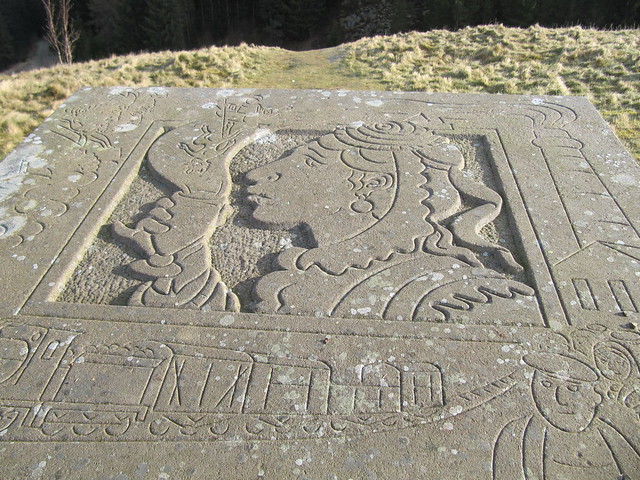 After having read about a nightmare descent through the forest at the end of the Innerleithen circuit, we’d decided at the beginning to simply retrace our outward route for the return. However, the very steep descent from Priesthope Hill changed our minds about that decision, and we (Jimmy) had decided that we should take our chances with the “plummeting” forest descent. (eek!!)

But I’m getting ahead of myself. It seemed a very long way, and a bit of a trudge, from Glede Knowe, where we sat down for our first proper break, to the 657m point—and it was still another km from there to the summit of Windlestraw Law. The sky had gone quite dark by the time we got there, and the wind that had kicked up was cold. 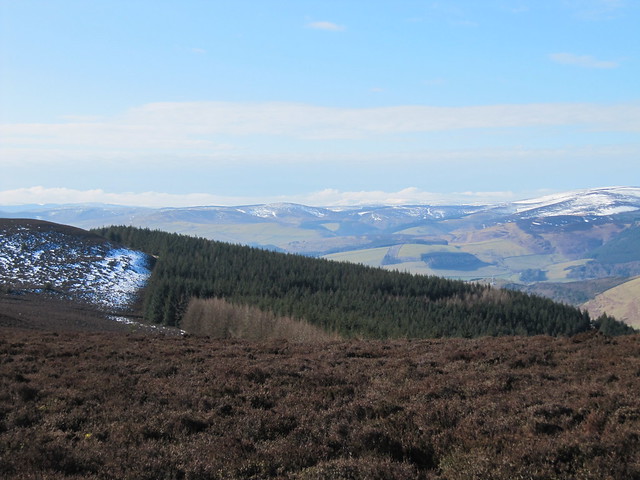 nice views across to distant hills 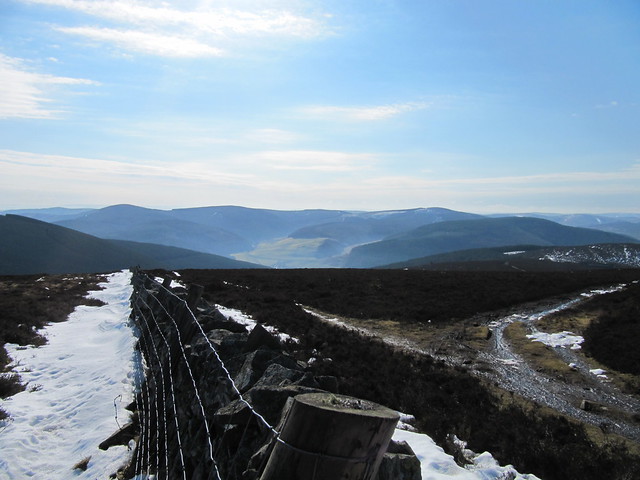 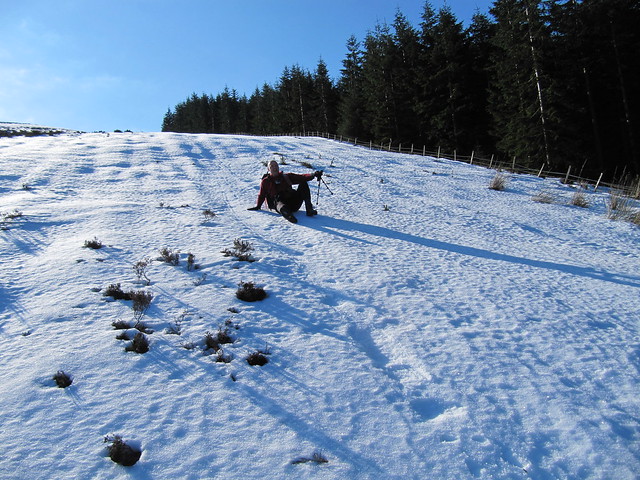 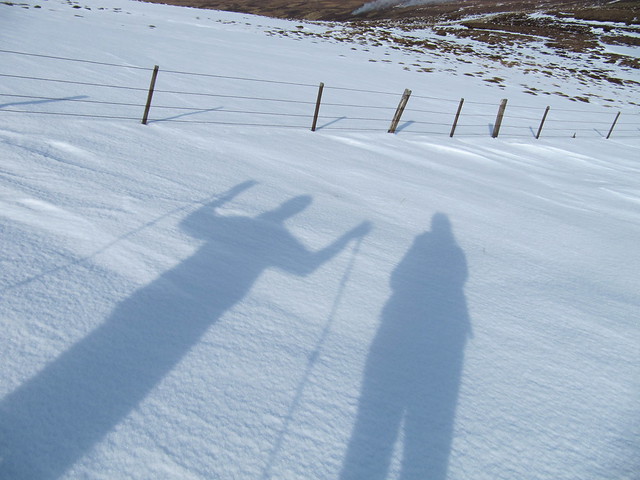 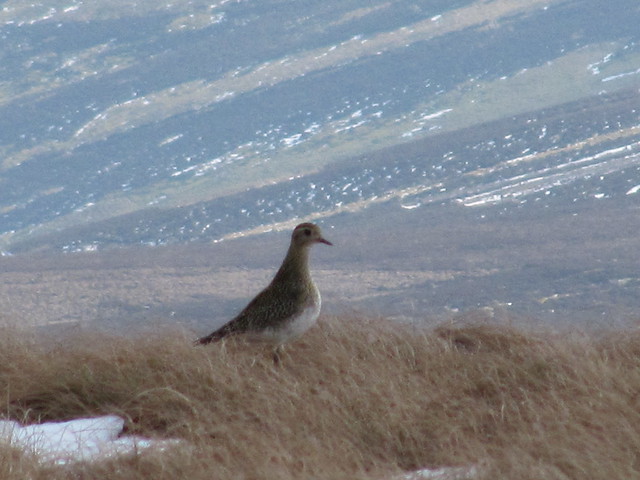 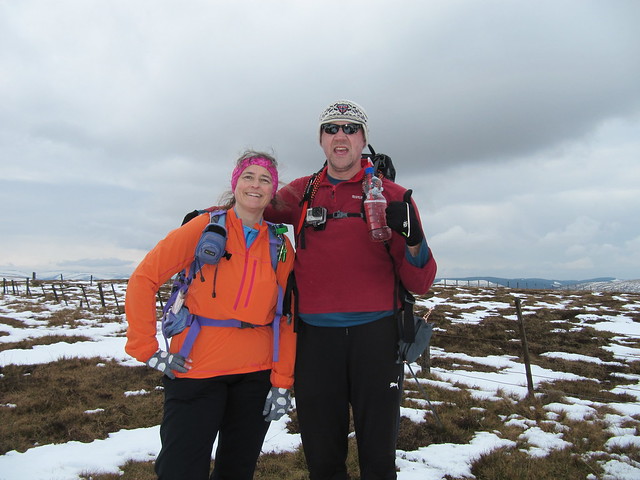 We didn’t stop there for lunch, but instead decided to head back to the 657m point. But we cut off a corner across very tussocky terrain and instead stopped for our lunch at Plover Know (before ascending Scawd Law).

The traipse between Scawd Law and Cairn Hill was pleasant enough, and by this time, the darkest clouds had passed us by. We took another break at the top of Cairn Hill, and had a wee chat with a MTB-er who had just slogged up what we were about to head down. The top part of the descent was steep, and boggy/muddy, but we made it down with only Jimmy falling on his bottom once. There were a couple more quite steep sections, but they were dryer than the top section had been, and it wasn’t long before we reached Walkerburn, and finished off the outing with a ~2½ km stroll along a very high-running Tweed back to Innerleithen. 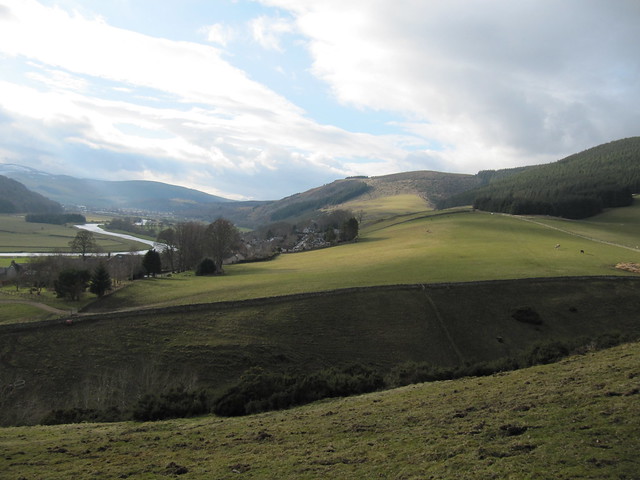 We stopped into a pub for a quick drink, and then headed back to our respective sides of the country.

I was very tired, and am even a little bit sore the next day, but it was just so so so SO nice to be out! (NB: we’re back to rain and wind today, sigh.)