Another weekend; another series of plans made, starting optimistically and then gradually reducing in size until we were left with just a couple of local wanders. The weather this winter is not really motivating! Frustrating as we had a 3 day weekend available. In the end we went cycling on Friday (around Glasgow and Lanarkshire) and running on Saturday. By Sunday, the outlook had deteriorated enough that it didn't look worth driving to Arrochar or even the Borders, so after lunch we hopped on the train to Kilpatrick. Duncolm is always a handy destination as it is less than half an hour away by train, and with a regular service too. 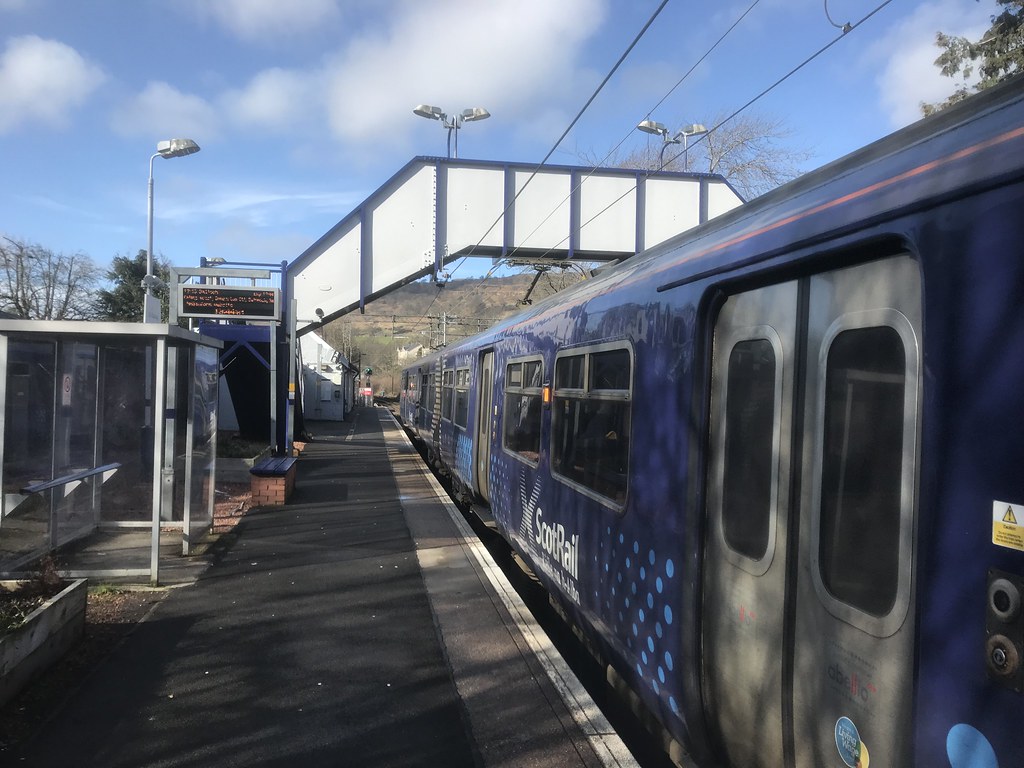 
Map.gpx Open full screen  NB: Walkhighlands is not responsible for the accuracy of gpx files in users posts
We were on our way not long before 2pm - a walk up fresh tarmac before turning off onto a muddier path heading straight for the Slacks. The long-range views weren't brilliant today but you quickly get some good vistas out over the Clyde from here before the moorland begins to level out higher up. 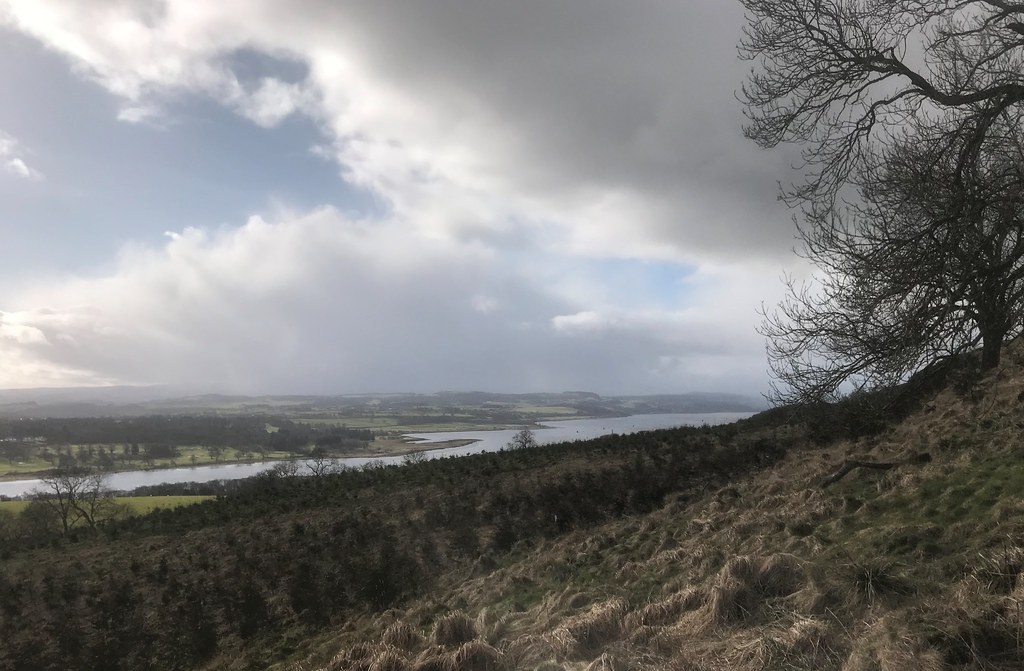 SW across the Clyde 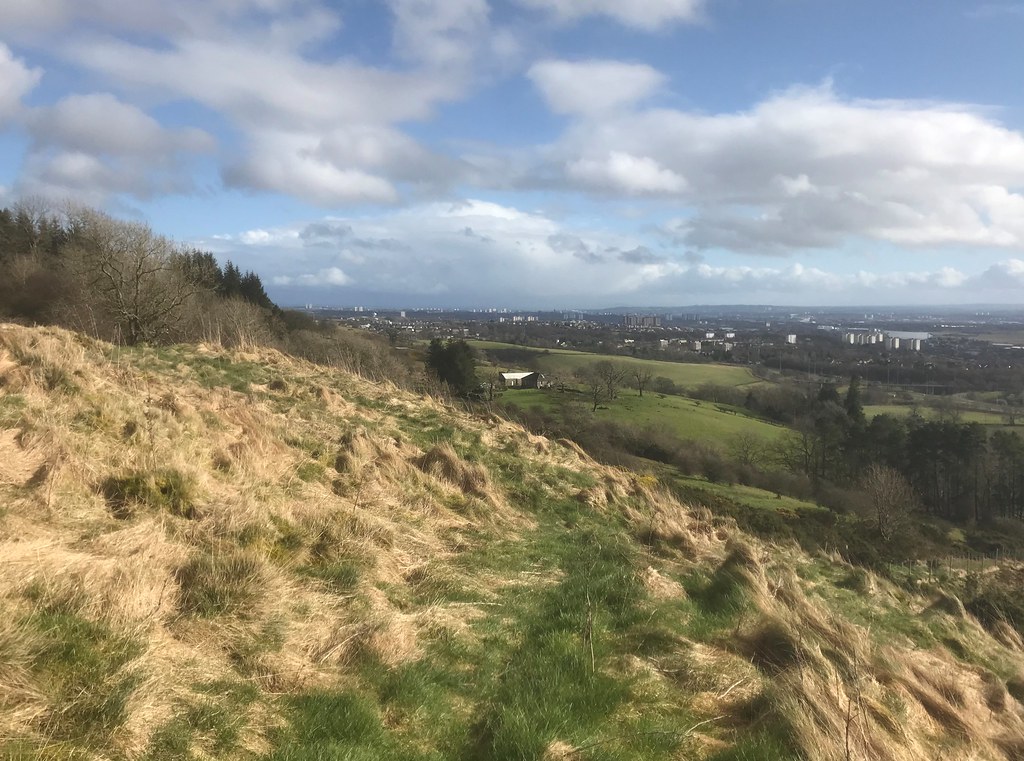 Glasgow from above Drums farm 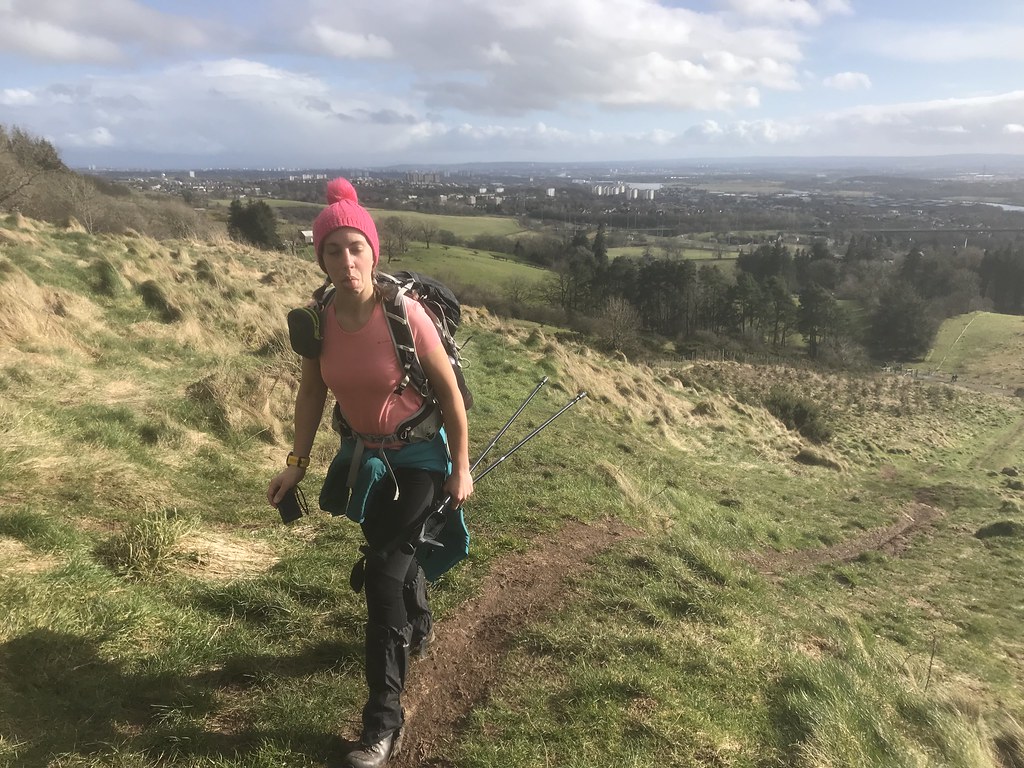 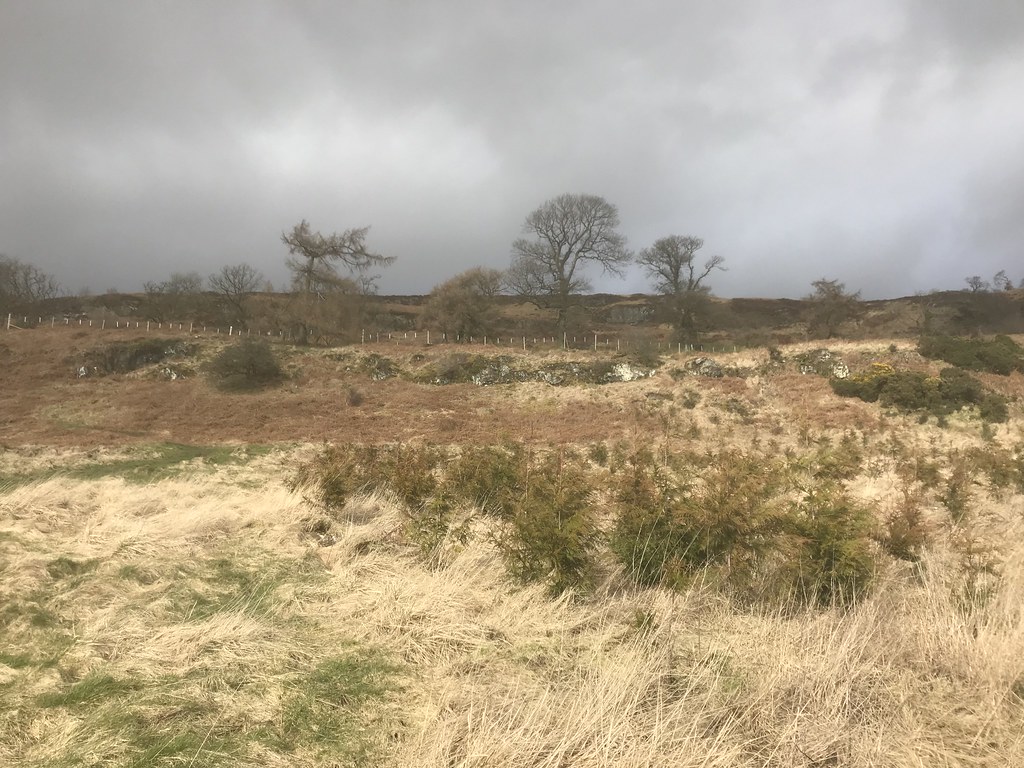 Looking up the Slacks 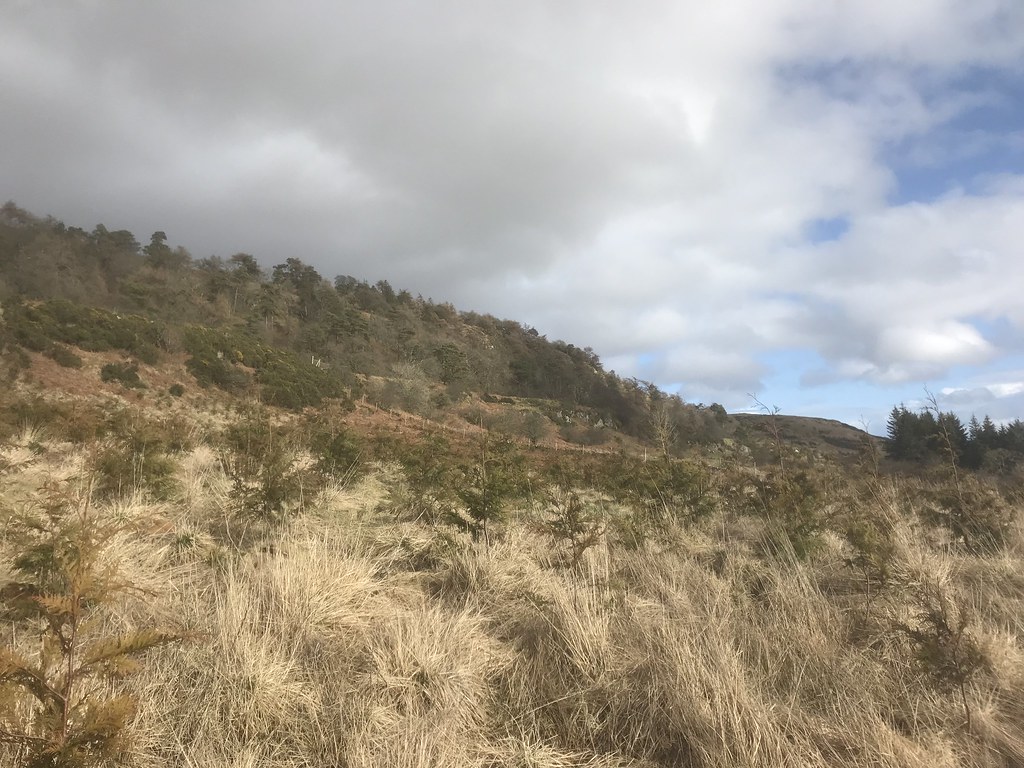 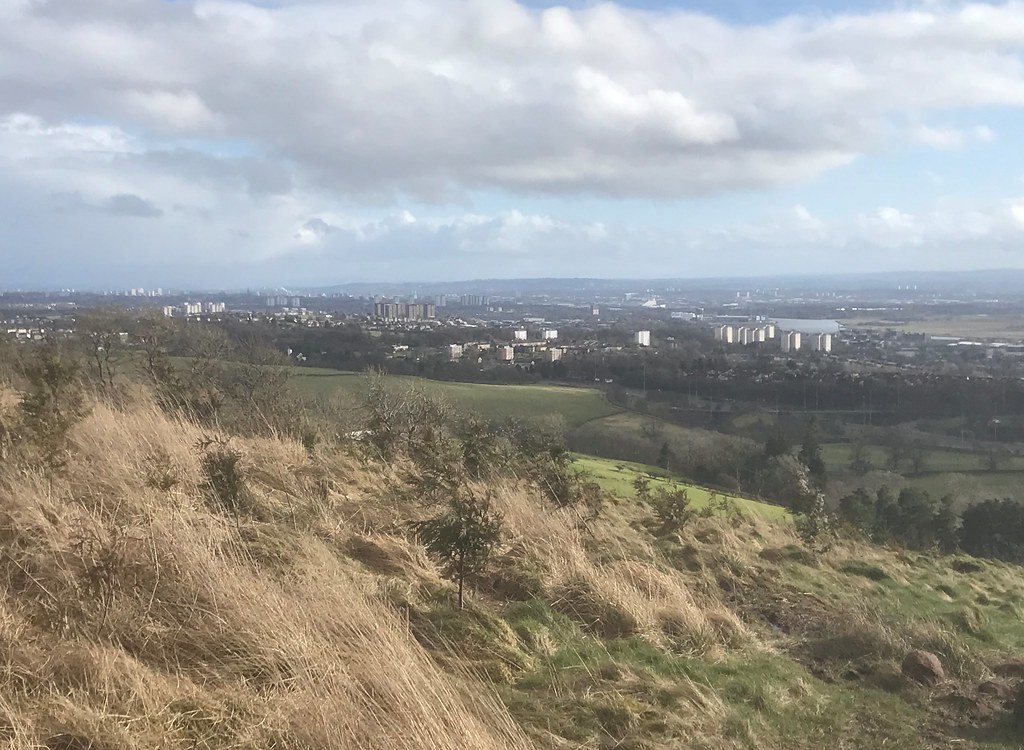 Glasgow from the Slacks 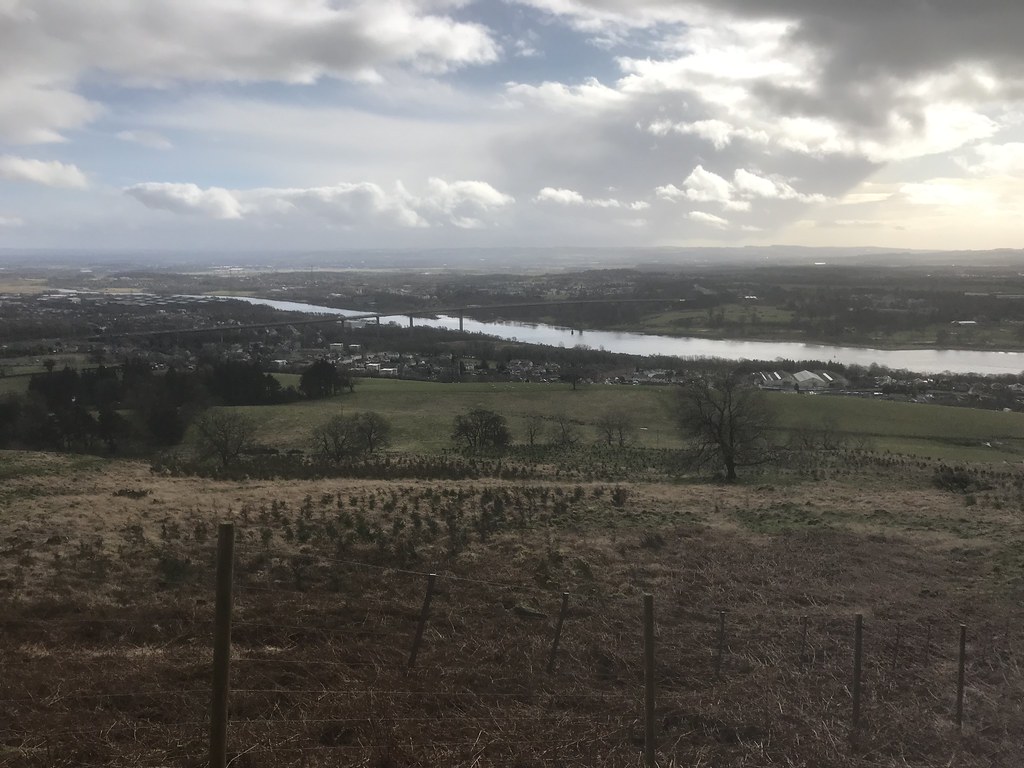 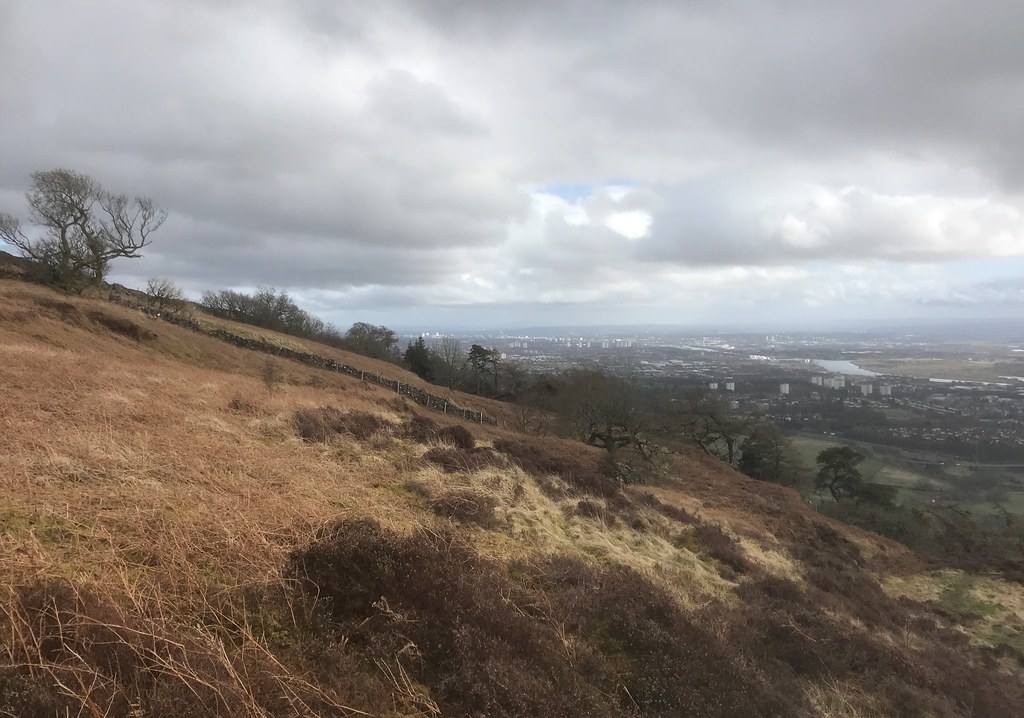 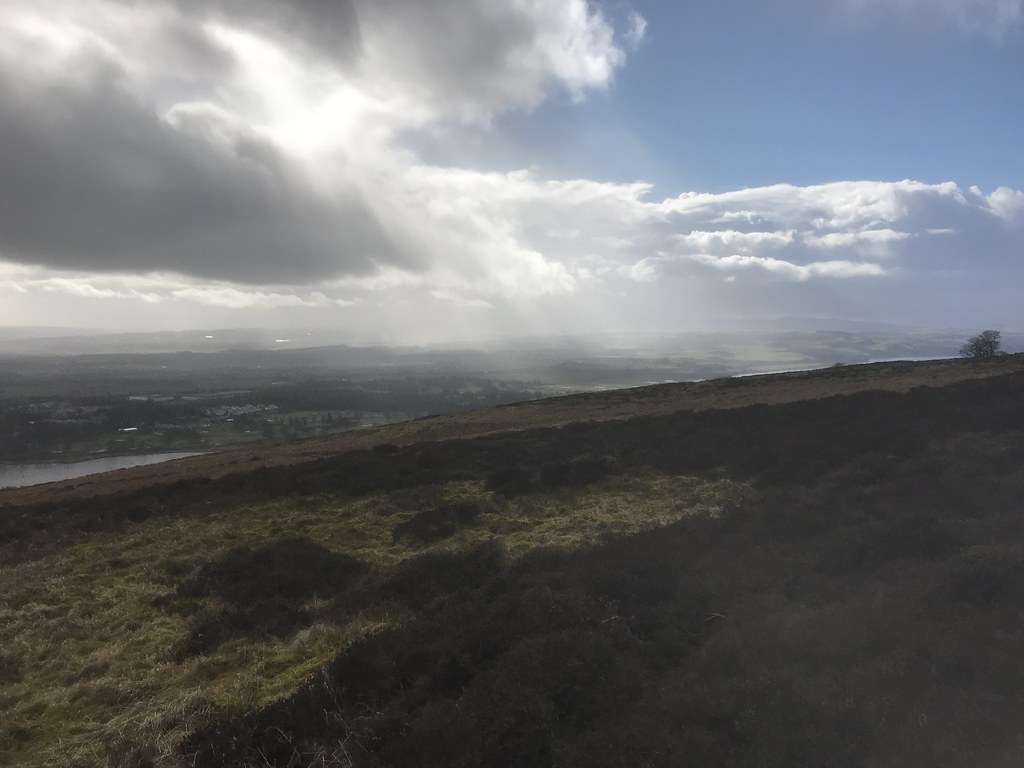 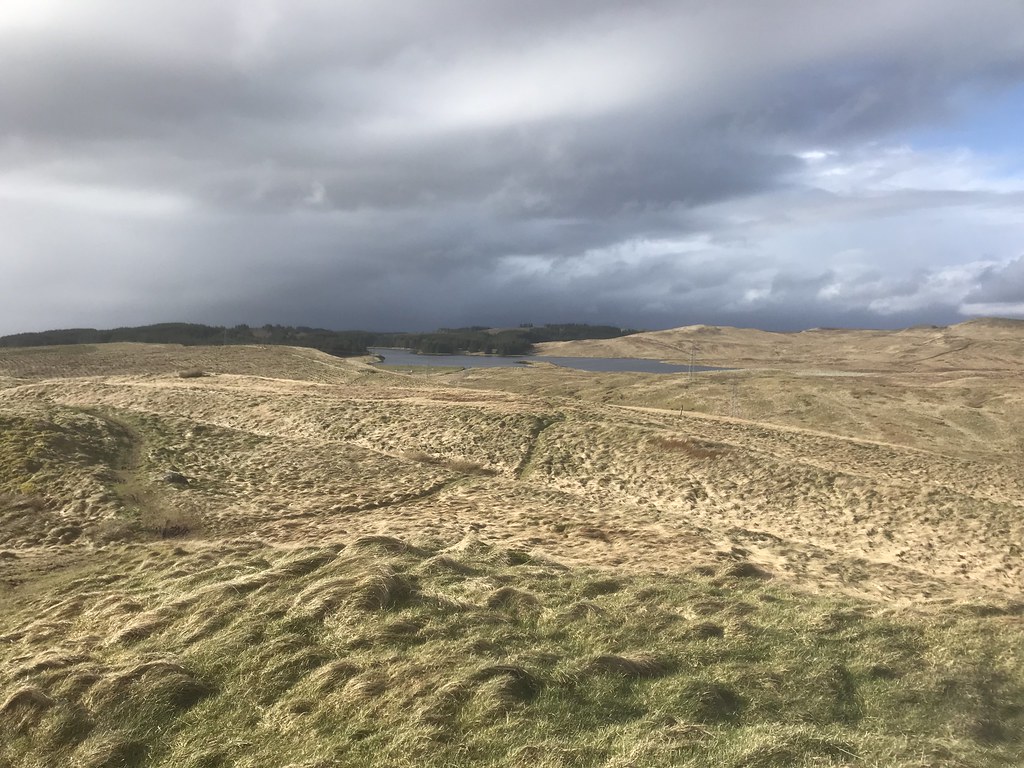 From the summit of the Slacks, we tried to shortcut across to Duncolm with partial success using a bit of access track and following a fence. It was boggy, but the other way round would have been too. There isn't really any getting away from the bog in this part of the world, especially at this time of year. A work colleague who does a lot of reservoir inspections locally mentioned that there is about 3 times the rainfall around here that you get even just a short distance further east in the Ochils. It shows

. It started raining heavily too, just to emphasise that fact. 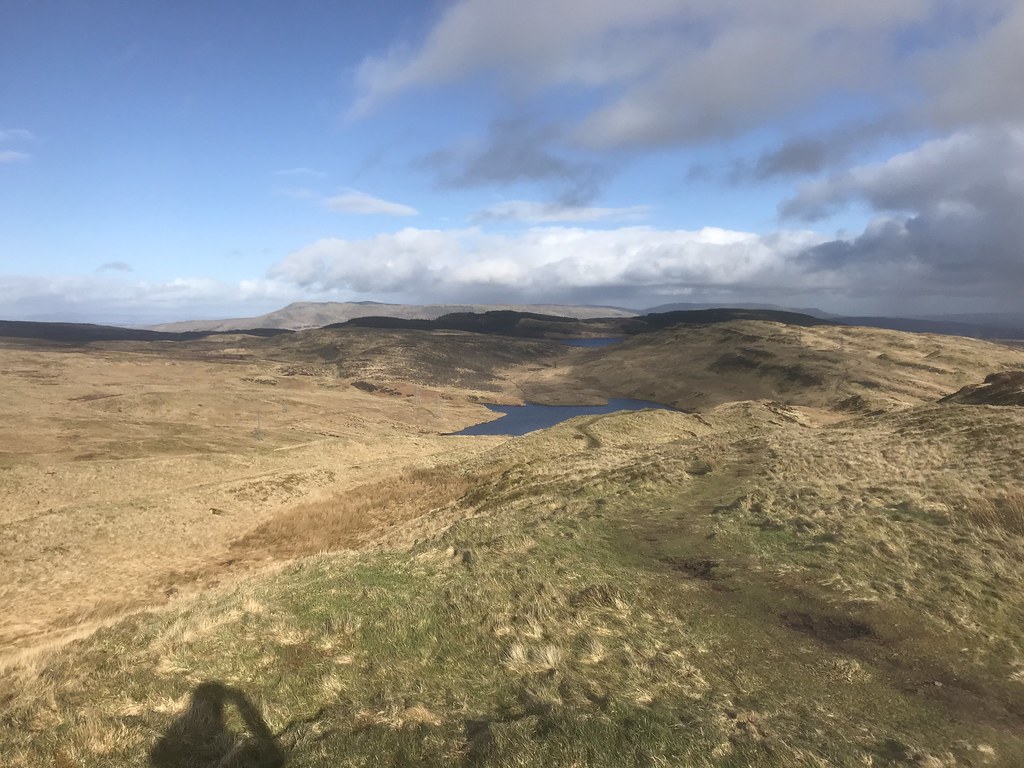 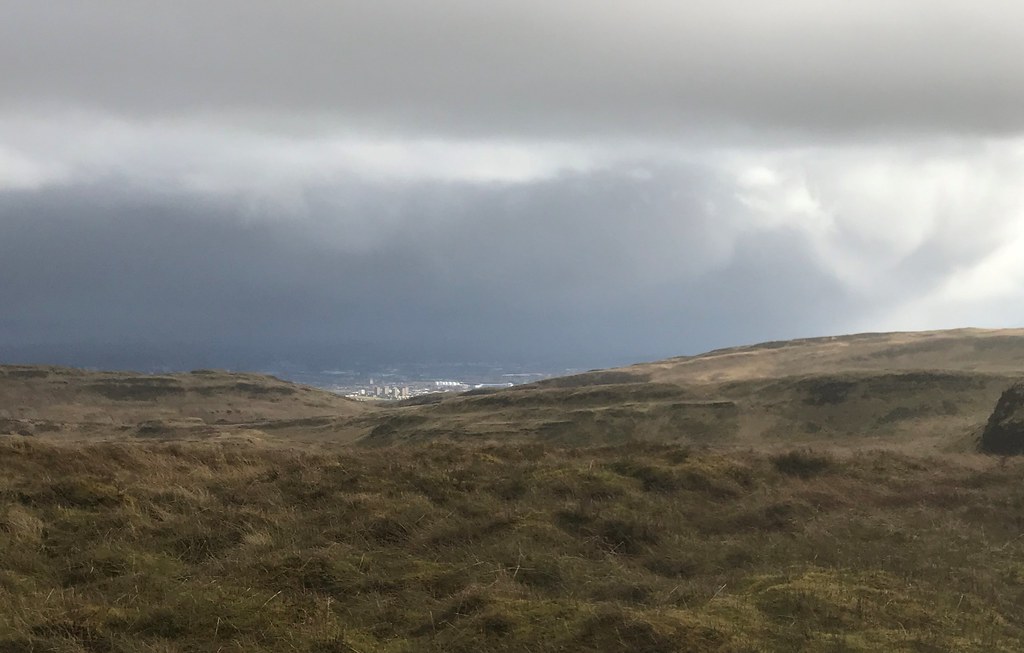 Having picked up the main Duncolm path from Loch Humphrey, the way was at least obvious. At least the rain had only been a short shower (although there would be more of those). I decided to include Middle Duncolm (which Jackie had done before but I hadn't), and we met again for the final quick ascent to Duncolm. I can't help but be impressed by the views of Loch Lomond and surrounding hills from here, even if they weren't at their most striking today. 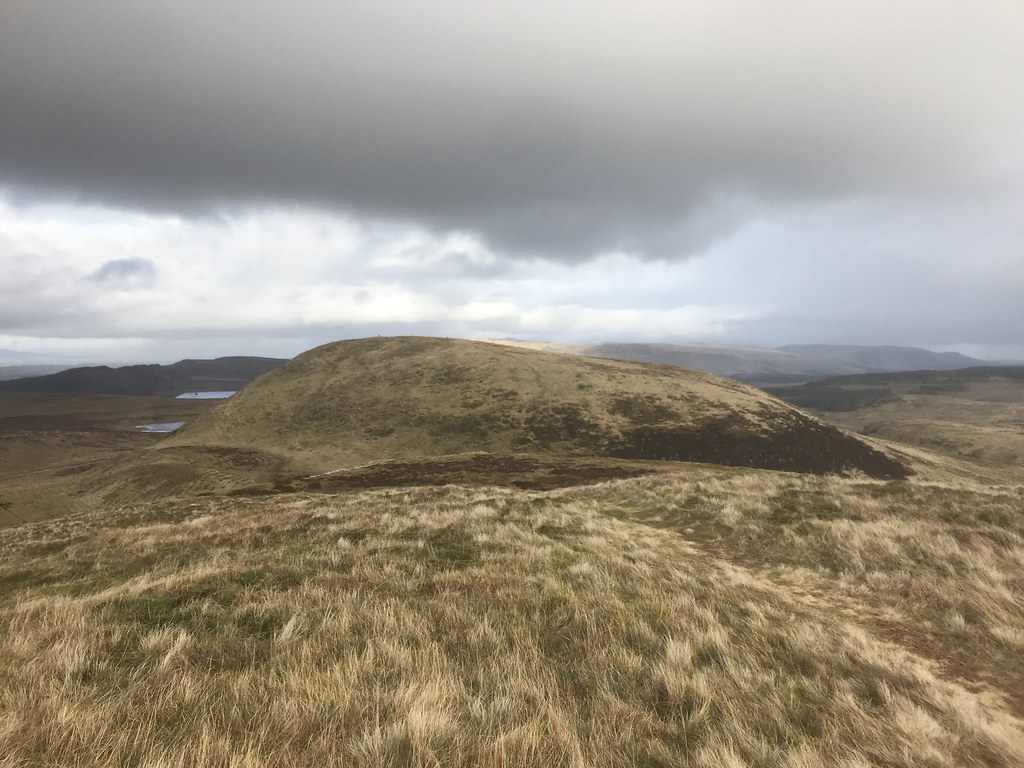 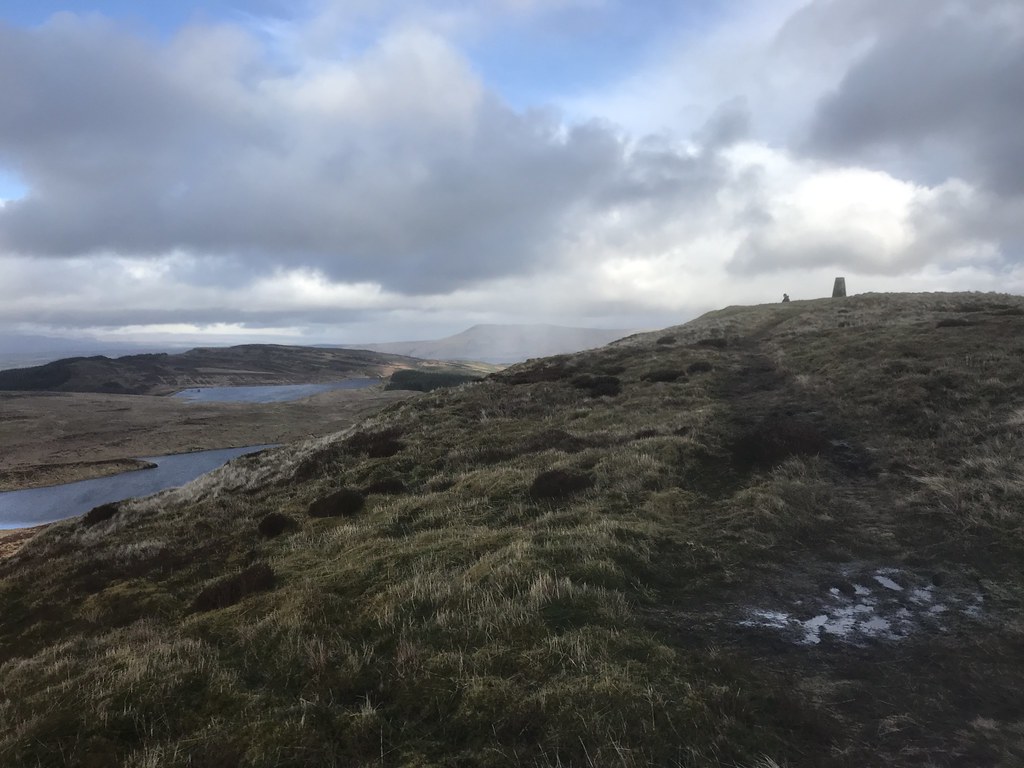 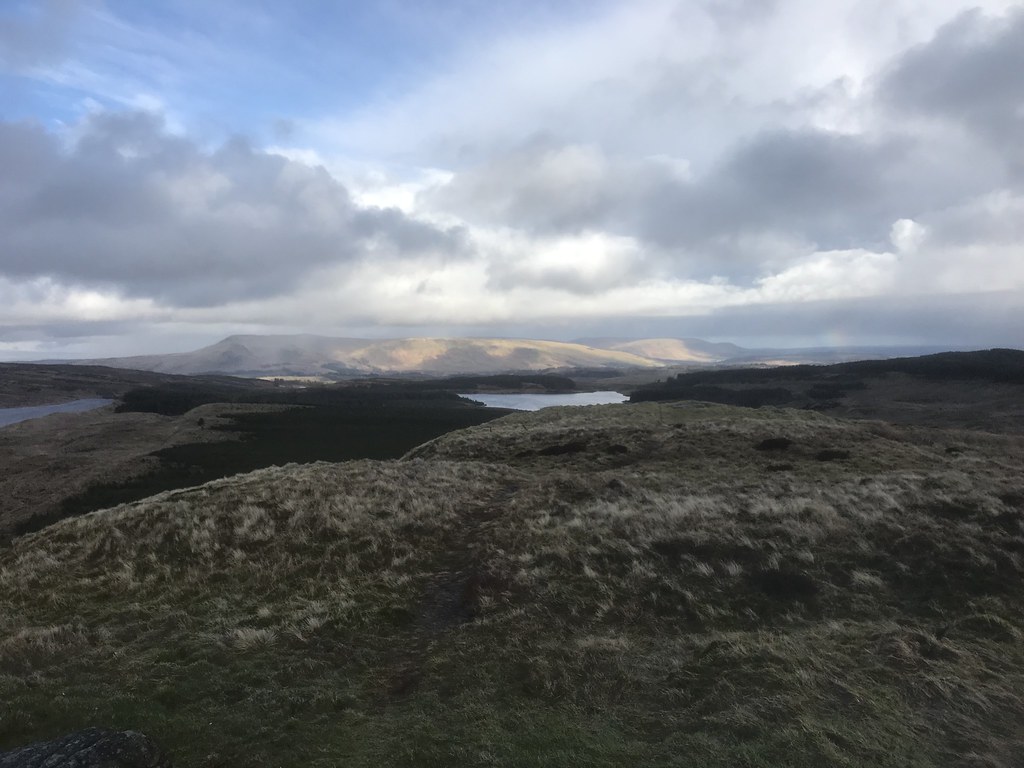 We retreated quickly from Duncolm as it was breezy up here, and decided to go with our original intention, which was to head over to Doughnot Hill before dropping into Dumbarton. The next bit was a bit more off-piste, and it started hailing to add to the misery. 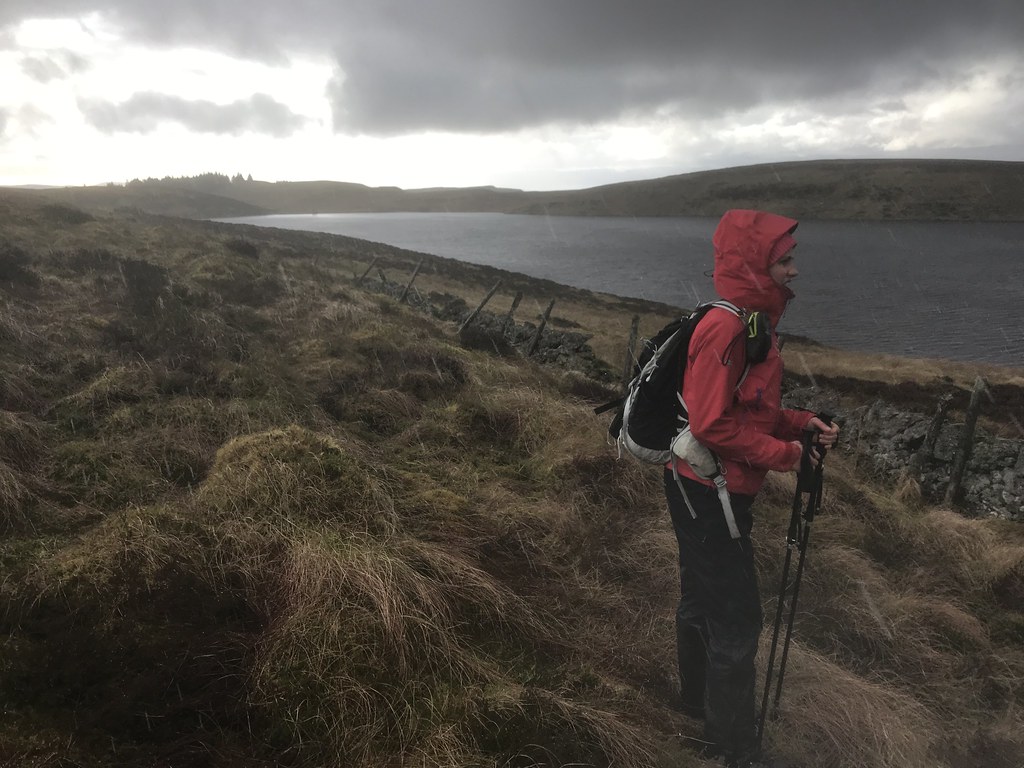 We were soon at the dam on Fyn Loch, from where we made a rather damp beeline for Doughnot Hill. If anything, the views of the Luss hills (and probably Cowal if we had been able to see further) were even better than from Duncolm. Some firm turf on the summit too - possible summit camp location? 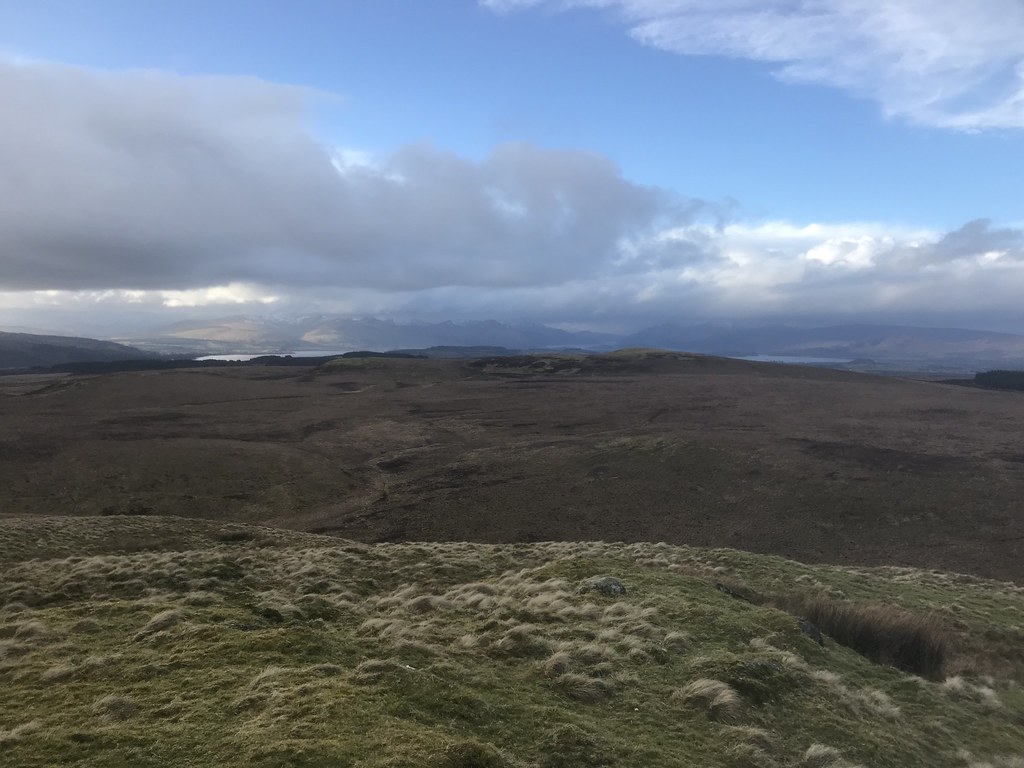 Towards Loch Lomond and the Luss Grahams 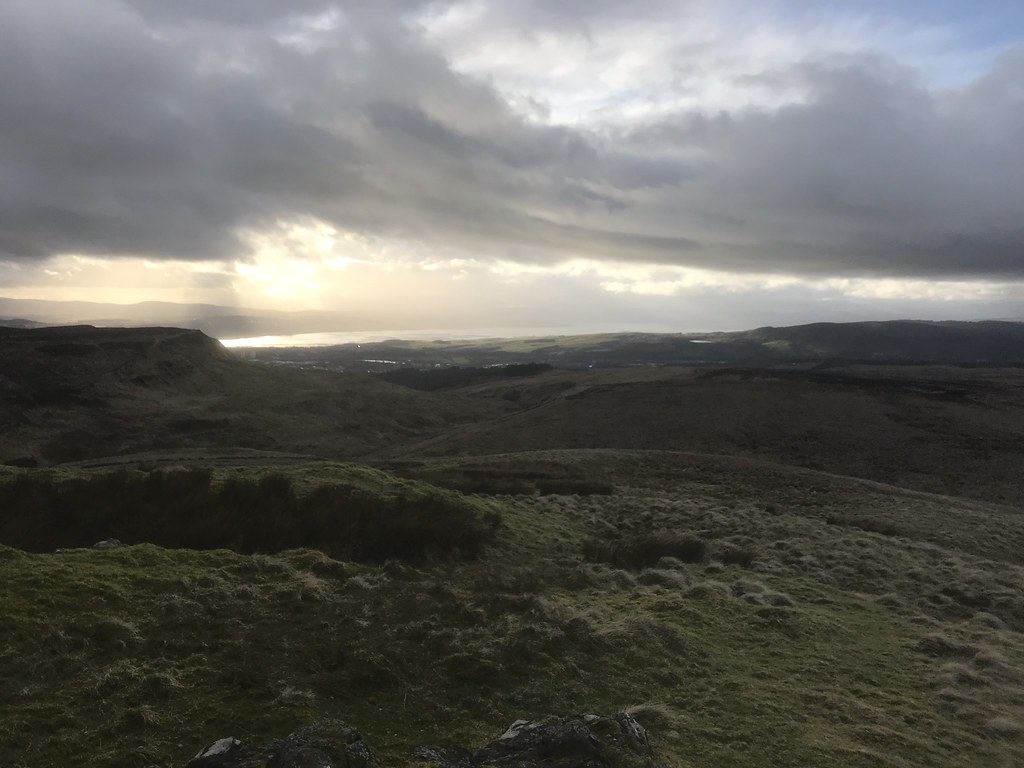 South across Lang Craigs to Inverclyde 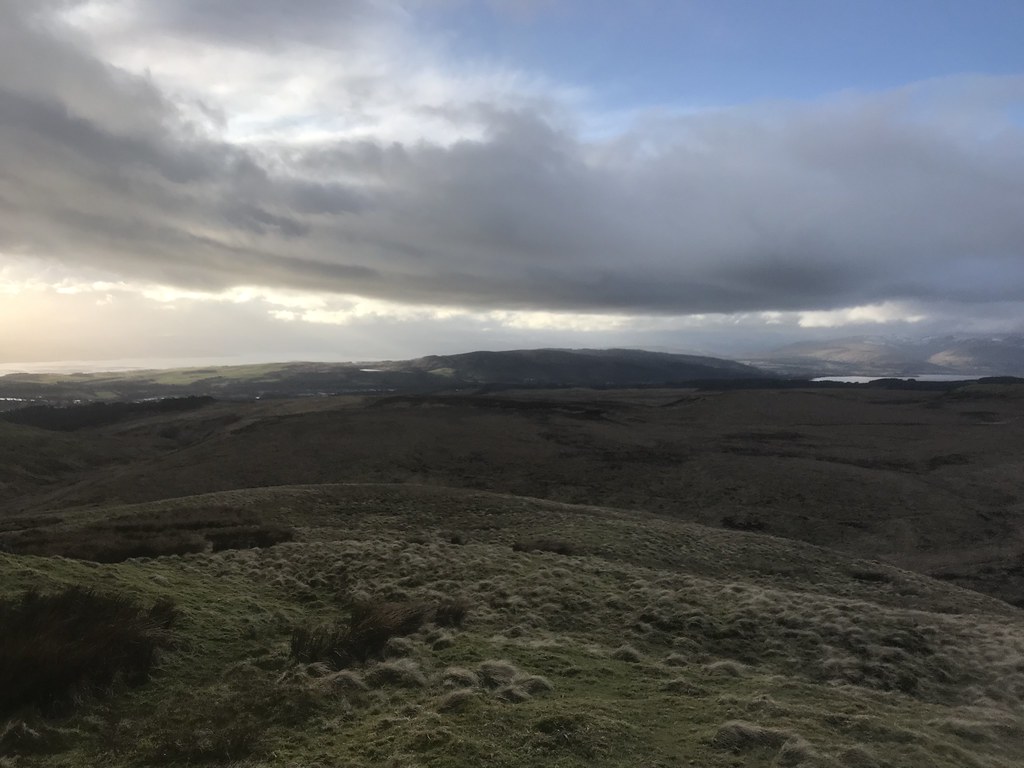 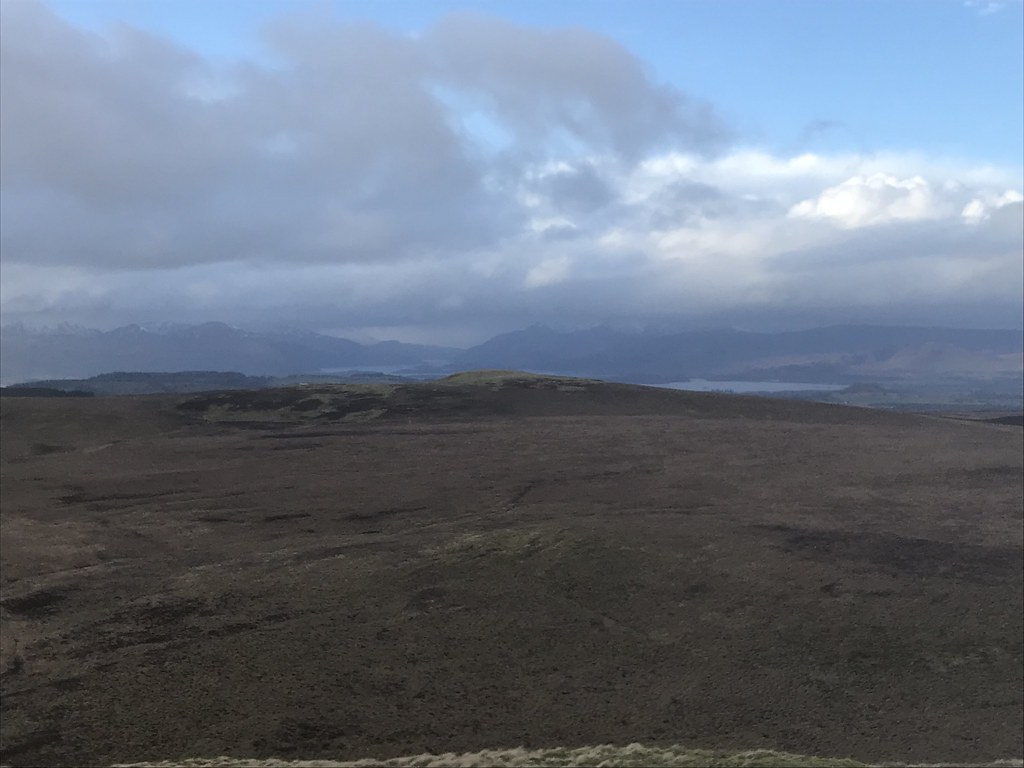 Zoom to the Luss Grahams

Unsure which way to go next, we played it safe and retraced our last few steps before following a wet trodden route to the Black Linn dam. After a couple of forestry track junctions, we picked up the signposted Lang Craigs circular path, which led us with less thought required down to Overtoun House. We probably could have dropped straight off Doughnot Hill to this point as well. 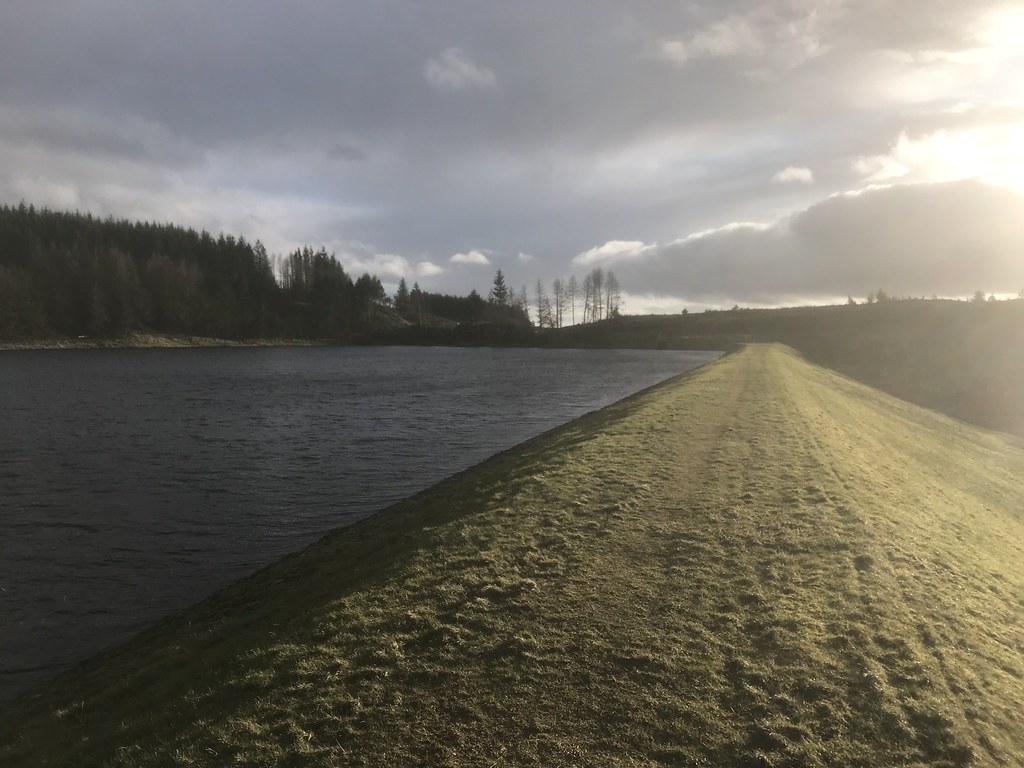 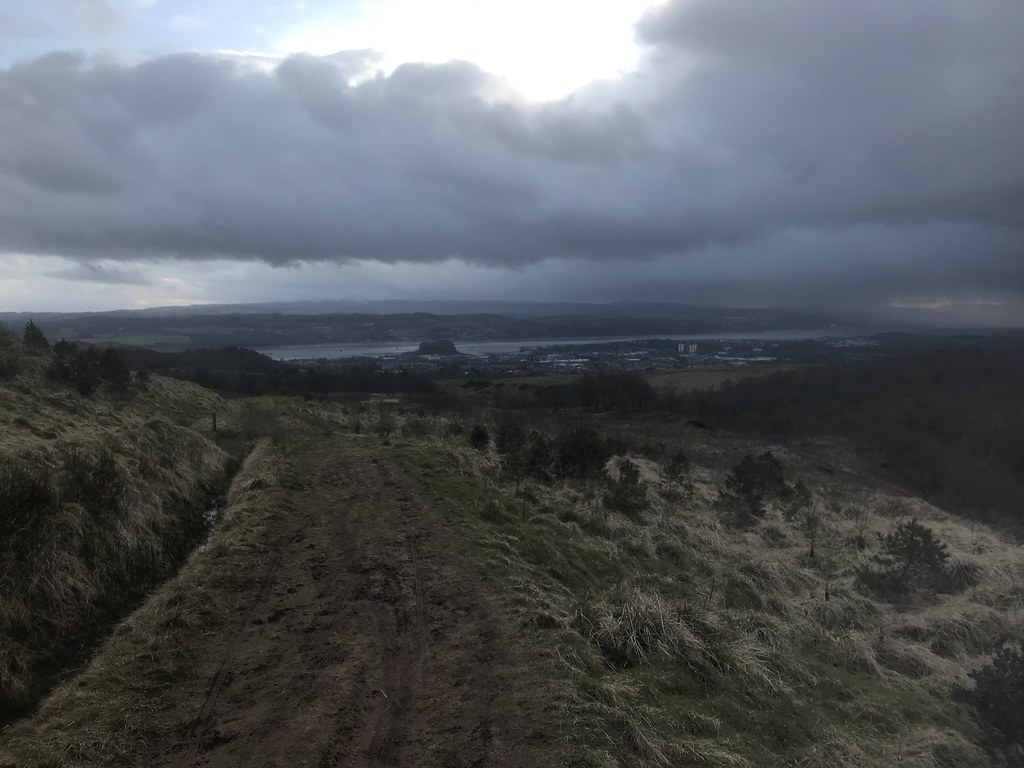 Looking down to Dumbarton Rock

The walk down to Overtoun House was very pleasant but we were aware of the weather moving in - we were going to get very wet soon. 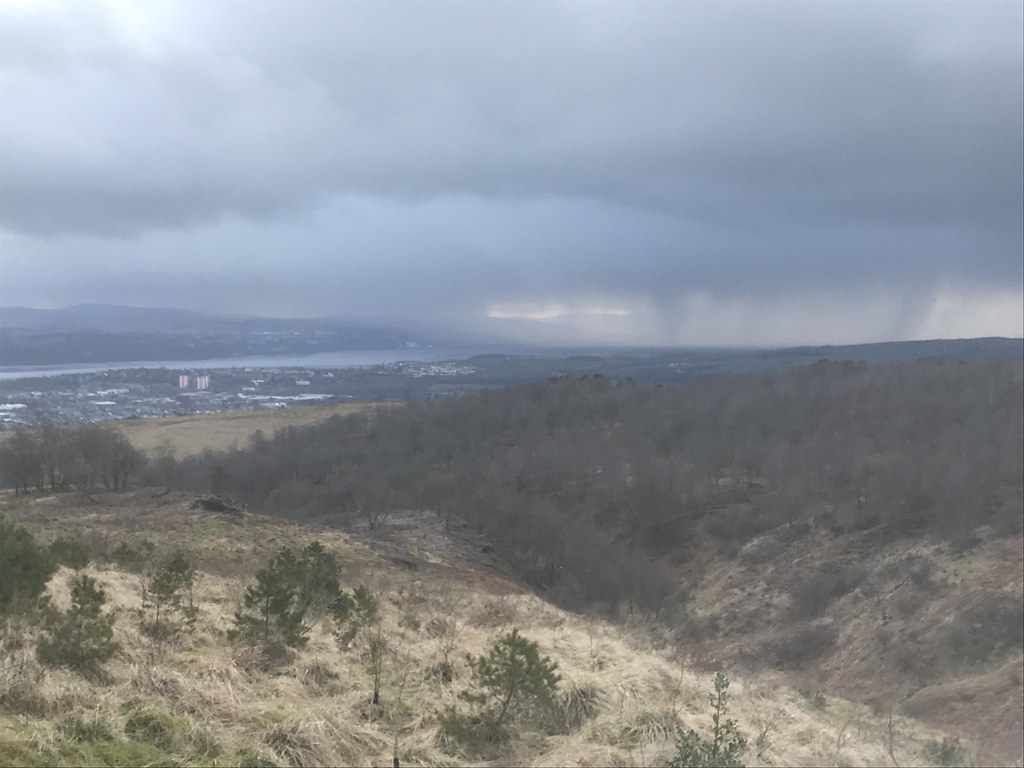 The weather hit us as we approached the hotel, and it hosed down as we descended along a woodland path and through a housing estate to the A82. I managed to get drenched by a passing lorry at the crossing, and was grateful to get on the train which appeared at the station about 3 minutes after us. Despite the bog, this was a good local wander.

My local hills always get a Thumb's Up from me.

I was up there midweek last week, evening, walking the dog up to Loch Humphrey, well past the holiday cottages, and a pair of Police 4x4 Landrovers came from up-top. Heaven's alone knows why they were up there.