Nearly a week into my trip south a couple of sub-2000 outings and plenty of walking round the streets of Edinburgh convinced me I was ready for something more challenging, so I got back on the trail of Percy Donald's 1932 list of hills and tops.

The Glen Sherup circuit has always looked a good way to spend a few hours so I set off up the M90, eventually parking at the Glendevon car park later than planned at 11.30 - which partly proved to be my undoing.

It's a straightforward walk from the car park, a path linking with the forestry track after a few hundred yards, then a mile-and-a-half gradual climb through the trees above the Glen Sherup reservoir. The path away from the car park There's a mile of so of this Which turned into this

Turning right at a cairn, I followed the firebreak straight up to a gate which opened out onto the hillside with views to the south and east that would on a better day be superb, but even so I could catch glimpses over to the Lomond Hills as I made my way up. Up through the firebreak

I was surprised at how much snow was still on the ground and grateful to follow several other footprints up the hill. The gate is a welcome sight Well-trodden route up past the plantation

The going got slower as the snow became thicker and icier as I neared the top and the lack of winter gear was rapidly making me revise my plan as I arrived at the top. Also, by then it was 1.30 and I was only a quarter of the way round. Looking south-east on the way up Innerdownie Cairn at the top of Innerdownie

As I enjoyed tea and a biscuit at the top, I looked over towards Whitewisp Hill and Tarmangie which, although fairly close, but seemed to have far more snow. I set off anyway and trudged over to Benties Knowe where I had a slow-motion tumble in thick snow. Brushing myself off, I took another break, making note of some very threatening weather passing by to the north and decided the circuit could wait for the summer.

Heading back down proved tricky for the first few hundred yards and sure enough, I ended up on my backside again before reaching the gate and a firmer footing for the trip back to the car park. 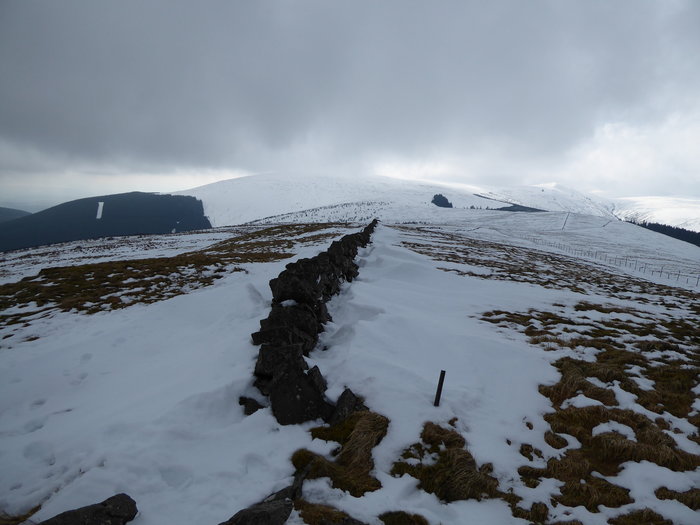 Threatening weather to the north - maybe time to turn back

Nice hill - of the nine Ochil Donalds it's the one I've climbed least, but it's not the one I like least. Were it a bit closer to my base camp of Stirling I'd go there more often.

Looks like you missed the short route up to the ridge from the forest track - it's hard to spot at certain times of year, but there's a good and very direct path that goes up through the young plantation starting from where the track crosses the burn at the horseshoe section, about 3/4s of a km west of where you emerged on to the NE shoulder. The direct path comes out at the second-highest stile on the shoulder (this also has a dog gate which my better half has at least twice crawled through rather than climb over the stile). The direct path is becoming a bit overgrown higher up as the trees get bigger - I keep meaning to take secateurs and do some trimming - but it's a good route up/down.

Other options for descent if you're just climbing Innerdownie include dropping off the eastern flank via either branch of a grassy path (which is, remarkably, mown up to 600m in summer by the WTS people) to reach the through-track at the Quey reservoir - from where there's a nice option working back to Glensherup via Burnfoot etc.

Whitewisp and Tarmangie are good too, when you get round to going there again. A King's Seat-Tarmangie-Whitewisp loop from Dollar is a pleasant half-day. There's not much point driving up the Castle Campbell road as parking is limited / traffic can be awkward - and anyway the lower section from the village via the side-exit of Dollar Glen at the top of the former golf course is a nice start, and allows a finish down the Hillfoot Hill track and back through the village.

Really enjoyed that, with an extension out to Innerdownie, down via the grassy track you mentioned and back along the path through Glen Quey to Castle Cambell - deserves to be better known, I think.

jmarkb wrote:Really enjoyed that, with an extension out to Innerdownie, down via the grassy track you mentioned and back along the path through Glen Quey to Castle Cambell - deserves to be better known, I think.

The middle part of the Quey-Campbell pass has become very wet underfoot in places in recent years however - during/after a wet spell it can make for a poor final part of that walk. These days if extending the Dollar loop to take in Innerdownie, I mostly leave the return track in the middle of the pass and cross to the far hillside. It's not too much of a slog to get up to the Commonedge-Hillfoot gap (there's even a path up the slope if you can find it), then there's an easy and pleasant track-amble back down to Dollar with nice views across the surprisingly empty quarter around Muckhart and Saline etc. They've been doing quite a lot of felling on that side of things over the past year or so, and for a while there were restrictions, but I think it's OK again now.

Incidentally, the grassy path system dropping east off Innerdownie has two main branches, which join up just below the summit ridge. One takes you down to the Quey dam while the other - more useful if heading for Dollar - comes down to the southern end of the reservoir, although you need to leave the path where it flattens out near the bottom and have a couple of minutes of tussock-hopping to save a long zigzag.

Thanks Dave, great tips from your local patch, as usual!

There are lots of little sneaky routes and options around, as almost anywhere. It's just a case of being nosey and gradually finding some of them!

I seem to have been even more Ochilish than usual since the turn of the year, what with the weather and being a bit tied down with some work - and having no urge to drive far. Have had 22 outings in 2020 thus far, so a reasonable tally, but apart from a mid-January Chonzie it's all been Ochils: 13 Cleuchs, three non-Cleuch 2000er days, a Colsnaur and four Dumyats. Last time I had two consecutive Munroless months was in 2002, so am keen to extend that sequence if feasible. Will see what next weekend brings...