I have a list of hills I really want to get to for various reasons, mostly in the west, but although we seem to have mostly got rid of the weekly storms, the Saturday forecast was still pretty awful across most of the country - not a day for going down to Criffel and looking back at the Lake District, or claiming two hills at Broughton.

I ended up with two possible eastern hills - Largo Law, which I'd kind of ruled out again for taking too long to reach, and Lamberton Hill, which was hardly worth it. But I do like Berwick, and it wasn't going to be more worth it any other day, so I booked fairly cheap trains at the last minute, late on Friday evening, and set off early on Saturday.

I had nearly an hour in Berwick before catching the bus back over the border - time to wander about a bit, and sit for a while by the old bridge. Five minutes after getting the bus I was Scotland again, deposited just beyond the border layby not quite at the Lamberton road end - mossy steps made a short cut up to the junction of the minor roads.

The road directly ahead of me said that it was a dead end, for 'The Whale's Jaws Lamberton' and a selection of numbers only, so I expected to turn off right for Lamberton itself, but when I looked at the map the first road would do just as well, leading up to a track which would cut the corner of the roads, so I took it. And there really was a whale's jaw, too, or at least the remains of one, on either side of the road. 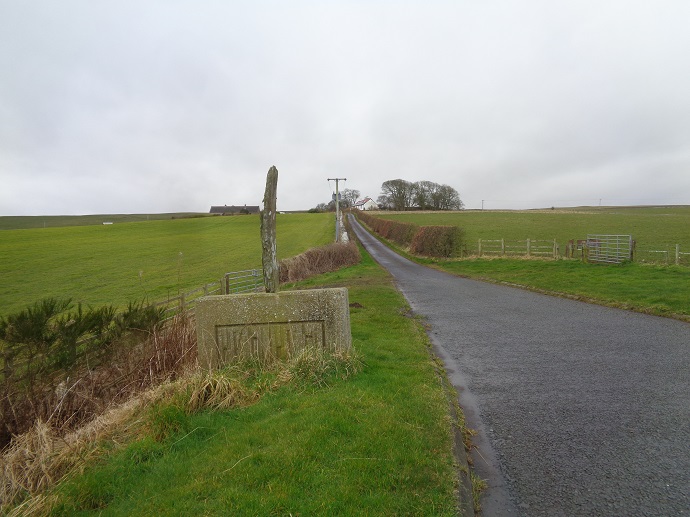 Up to the north I could see higher ground, although probably not the highest ground. Someone else wrote that this one didn't look like a hill, it looked like a field, which is kind of half true. It is a hill, with the ground dropping quite distinctly to the sea in the east and to Ayton and Burnmouth in the north - you come round the end of a definite hill in the train. But once you're up the whole area is the hill, with the summit hardly any higher than the rest - to the south the ground only really falls when it drops steeply to the Tweed. 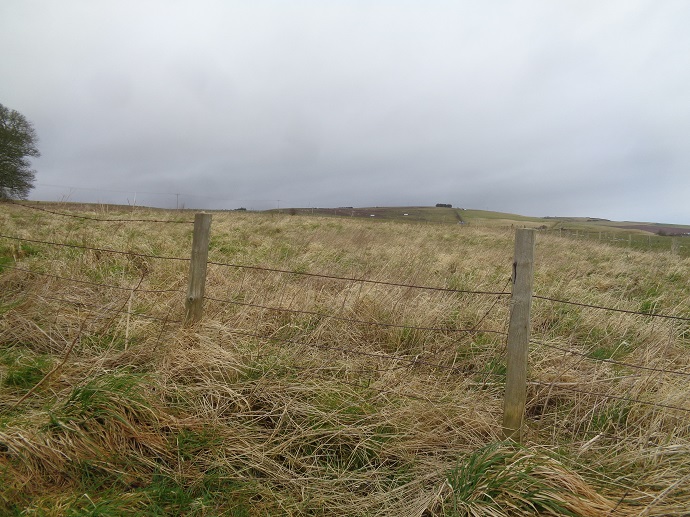 This way led up past the remains of the old church, once a far more important site in the days when Lamberton was the first Scottish settlement on the Great North Road. 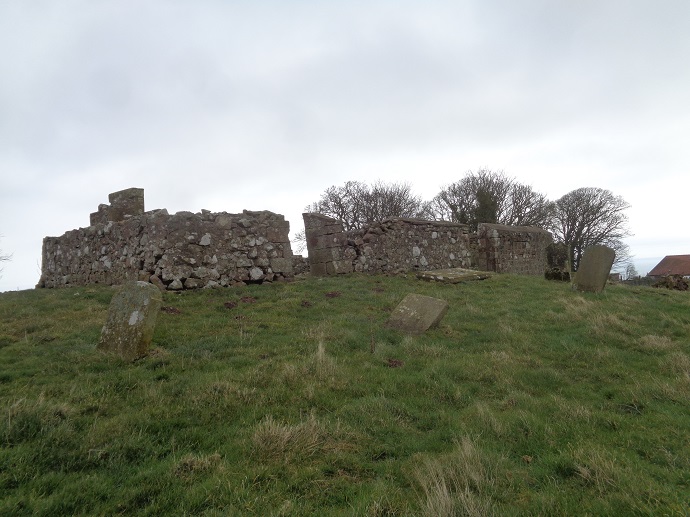 At the top of the road the cross track was just as substantial for a while, before leading right into someone's yard. Beyond a gate it became a line down the edge of a field, where some very young lambs, appropriately enough, were looking rather unprepared for their arrival into March weather.

Although I'd come over this way because it was forecast to be dry, the wind was whipping rain and sometimes sleet at me sideways, while across the border the sun was shining on the sea - a phenomenon which has been noted on the A1 before! 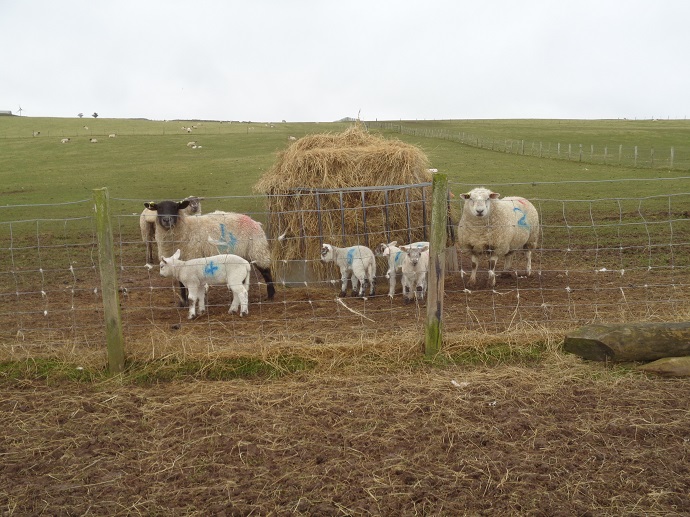 The path joined another access track at a corner and passed another house out to the road. I was hoping that by visiting in winter Sgurr's friends the cows would be hiding away indoors, but up on the hill beyond was something scarier than cows - whole herds (or flocks, or drifts) of pigs (which at least tend to be kept well away from people). 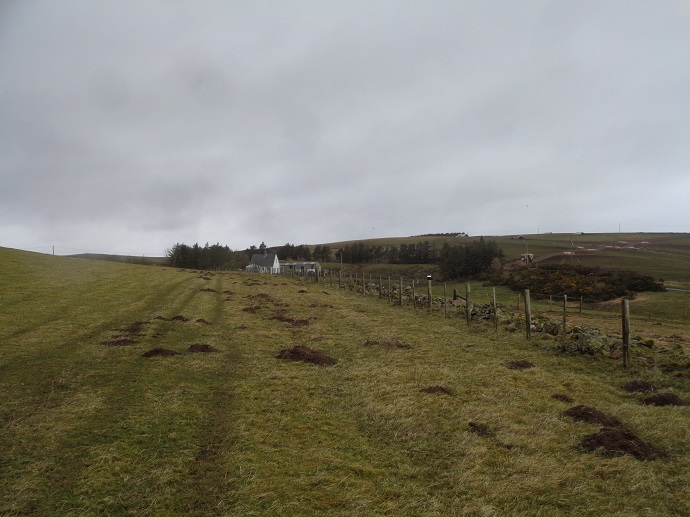 In a way the weather didn't really matter - I wasn't expecting spectacular views, and the gentle landscape around was still in sight. The only thing which might have been improved was an unexpected but hazy view to the Cheviots, but they're nothing new - the whole of the Borders seems to have a Cheviot view tucked away.

I turned left at the next little junction to find a way up to the trig point - the weather now seemed to have settled on dry but dull, which was an improvement. 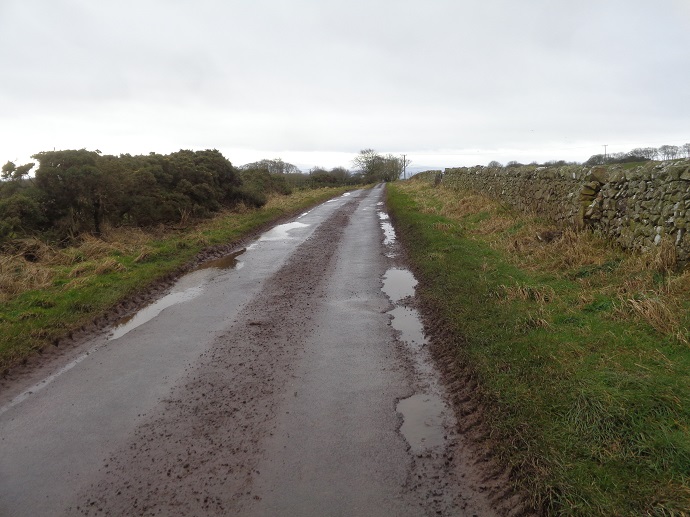 I turned up by the first fence - it seemed like the ground had been trampled by cows at some point, but the field was empty now, and a pair of gates let me through into the field containing the trig point, also empty. 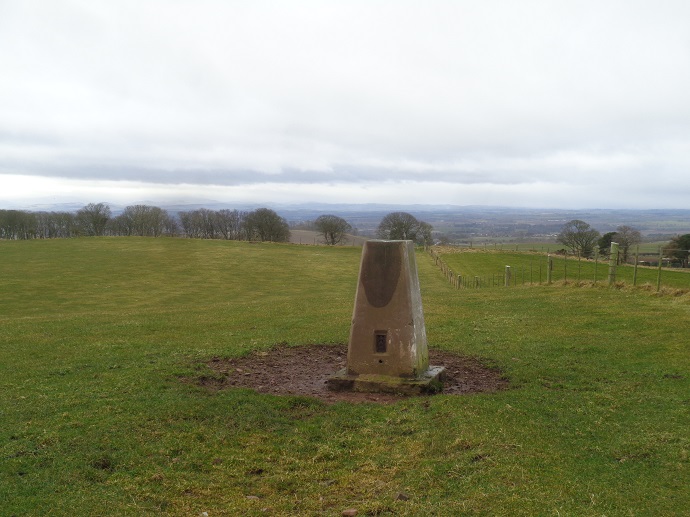 The view from this top was back down into England, with the sea, and Lindisfarne on the horizon. 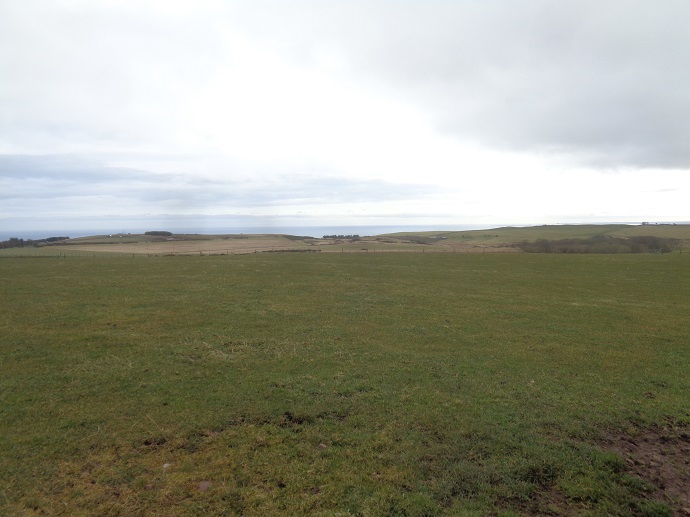 In the other direction the ground presumably rose very gently - just a green expanse of field between me and the higher top, with the corner of the trees as a landmark. Quite near to the top, someone had cut a weird track into the field - a broad line of shorter grass, heading from nowhere in particular to nowhere in particular. I really couldn't see what it could be for - it looked more like a marked path than any kind of farming activity, but it really wasn't. The real summit is completely unmarked - it's not even very clear where it is, although I wandered around a bit to see if anyone had left a stone at their idea of it.

The view from here was all brown and green borders fields and valleys - the sea was in sight, of course, but the curve of the Northumbrian coast was hidden behind the lower summit. You often get this change of focus on little tops, but for the distance involved this was probably the most extreme example I could remember. Just below the summit is what is marked on the map as the remains of a fort - two surprisingly distinct lines of rampart and ditch in a semicircle up to the field boundary, apparently ploughed out or otherwise worn away in the field below. The fence here had three strands of barbed wire, so I made my way back to the corner by the woods to look for an easier way through - no gate, but an awkward place in the corner where I could at least put my foot on a wooden slat to climb over.

The little wood was quite pretty in a bare winter way - tall trunks, and a real walker's gate at the bottom to let me out without any climbing. Down through the woods

From there I could see the road running down along the side of the field, and set out for the lowest corner to meet it, but partway down I began to feel doubtful, and on checking it turned out that I was heading down to the wrong road, so I turned and made my way to an upper corner instead to come out near the junction for Ayton. Looking down to Ayton

I was hurrying down the road because there was just a chance that I would have time to get something to eat in Ayton, although it didn't seem very likely - there wasn't very much reason for lingering anyway, nothing more exciting to see than more pigs. Cocklaw at the corner was almost a tiny village - I hadn't realised how close I was to the railway line until I heard a train go past, but when a second one went past I could see it - an almost endless goods train. Ayton came into view as a very pointy church spire, then the very red gatehouse to the ostentatious Ayton Castle. Instead of a pub or a tearoom Ayton has a peculiar thing called the Hemelvaart bier cafe, but although its website said it was open on Saturday it wasn't, so instead of a cup of tea I just went back to the shop for chocolate. I had lunch in Berwick and another wander round, and was home by mid afternoon, having crossed the border for the fourth time that day - not a bad day out, really, and more relaxed than Sunday was likely to be.

Excellent. Far harder doing it by public transport than by car as we did it. When we went it was a nearly measured Marilyn and it looked as if someone had built a small cairn on the summit, which we rebuilt, much to the disapproval of people who felt that cairns shouldn't be left in this sort of field. 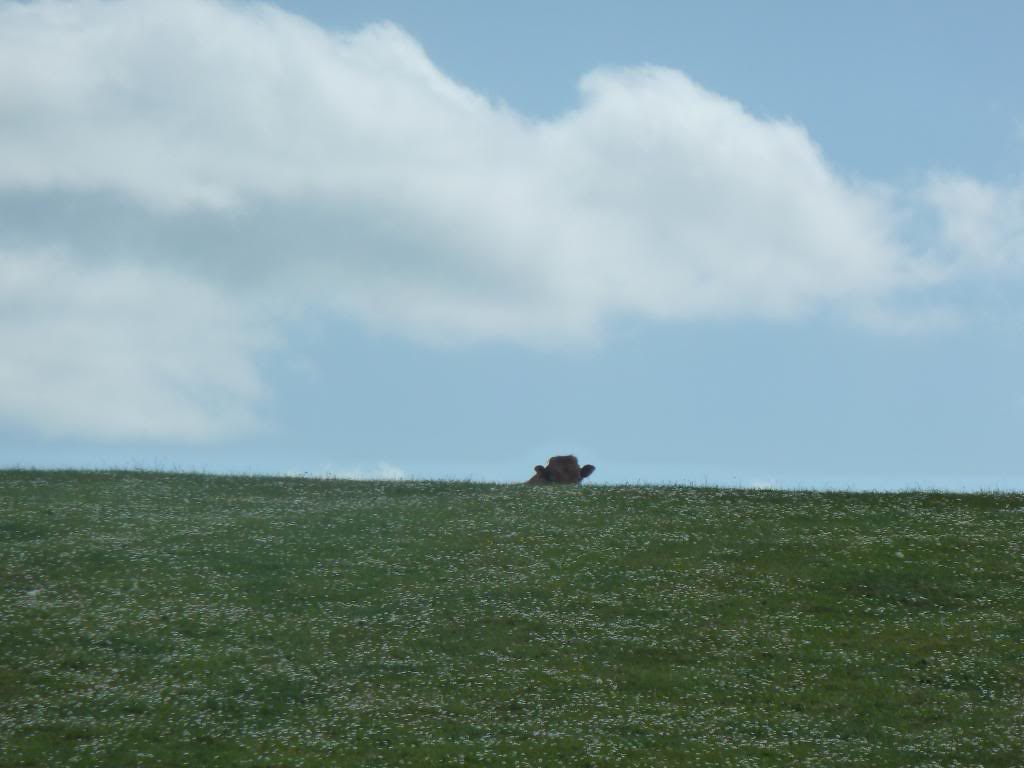