It was meant to be a double dip—the Grahams Meall Odhar and Fiarach are, under normal circumstances, probably each too short an outing to warrant separate drives. I’d long had in my head that I could do them both in a one-r, once the days got a bit longer (nb: although some of the hearty/hardy have combined them into a single route, my plan had always been straight up-and-backs, moving the car from Tyndrum to Dalrigh—or vice versa—in between. Not least because of the forestry and/or deer fence traversing between.)

Friday was forecast to be an oasis of settled (and even sunshine!) in a desert of ongoing unsettled, so it was automatically game on. I could fairly easily psych myself up for driving to Tyndrum; it shouldn’t take more than 1½ hrs or so. I was off by 6:30, and right on schedule, started walking about 2 minutes after 8am. It was a spectacular morning, as promised, crisp and frosty, but with loads of blue sky and sunshine. 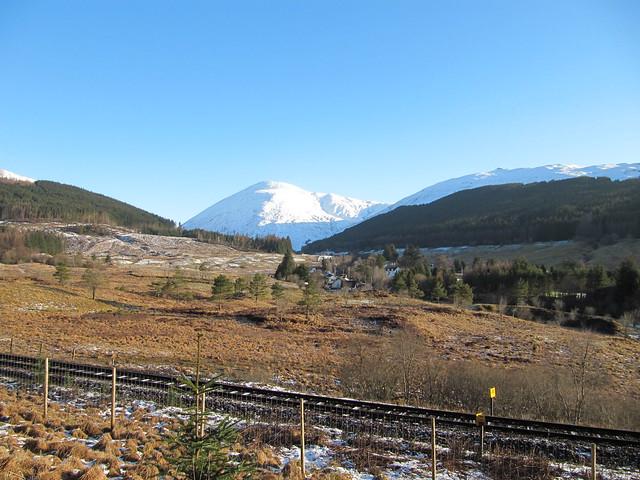 setting off -- Beinn Odhar (steep b*gger) across the way 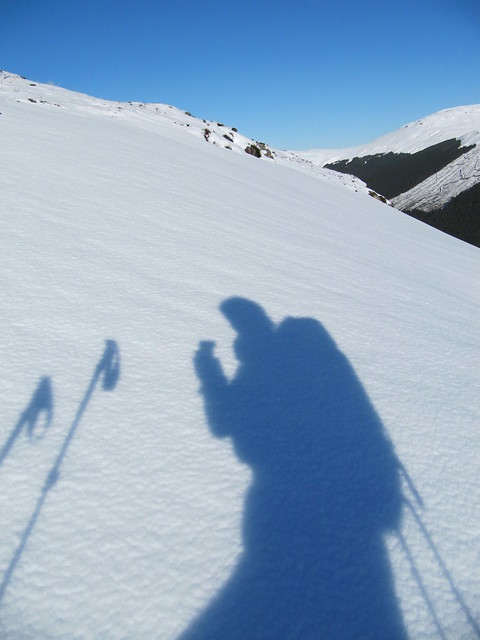 It wasn’t long before I was into deep soft snow—much deeper than I’d anticipated—and quickly realized that it was going to take me much longer than the 3 hours I’d pencilled in to climb Meall Odhar. Once I’d reached the top of the scree zig-zaggy path, the going became very steep and very arduous; not only was I contending with the snow, but I’d also worn my new rucksack and packed extra weight (on purpose), in preparation for foreign ventures scheduled (at least for the moment) to take place in a few months. In a heartbeat, the day became more about enjoying being out and getting to grips with new/extra kit rather than ticking hills. I also realized I’d be far happier to scale down my plans earlier rather than later—I’d be (more?) demoralized to start ascending Fiarach only to discover that I didn’t have the heart/legs to finish. 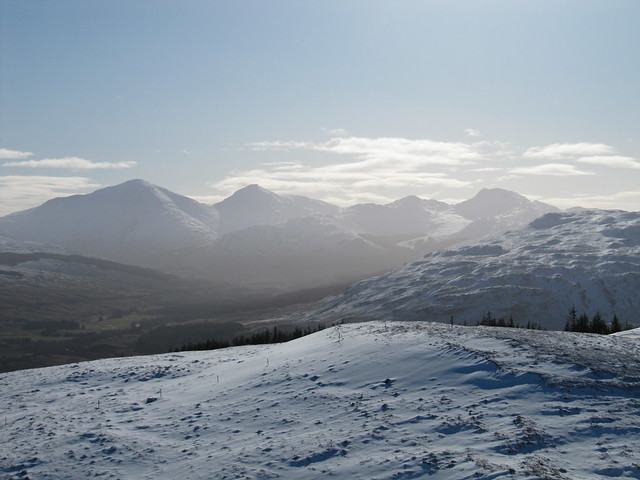 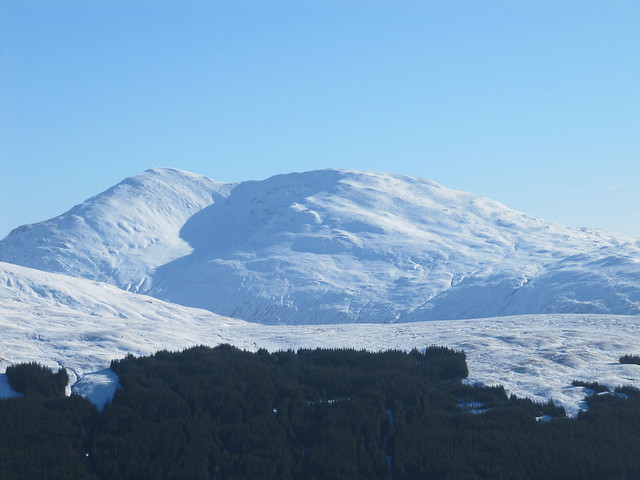 zoom to the much-maligned Ben Challum, respendent in its white covering

It was a spectacular day, and I revelled in it, recalling other glorious winter days that I’d had in years past: the Loch Quoich Munros (2015), Sgurr a’Chaorachain and Sgurr Choinnich (2016), Meall Dearg (2017), Stob Coire a’Chearcaill *and* Beinn nan Imirean (2018), Sgor Gaith (2019). As the list shows, I seem to have been fortunate to have at least one such day each year.

I finally reached Sron nan Colan, and as I wandered along toward its cairn, lost in thought, I suddenly stepped down down down into a deep hole. Icy water filled my boot, and instinctively, I put my other knee down onto the snow to leverage myself out. That leg/foot sank as well, and by the time I’d floundered my way back onto solid ground, I was sodden—like, completely sodden—to both knees. Boots sloshing, I made my way to the cairn and contemplated whether to even carry on—it was still about 2km to the summit, which I could see in the distance. But the day was just too good to dismiss, and right enough, my feet warmed up quickly as long as I kept moving. 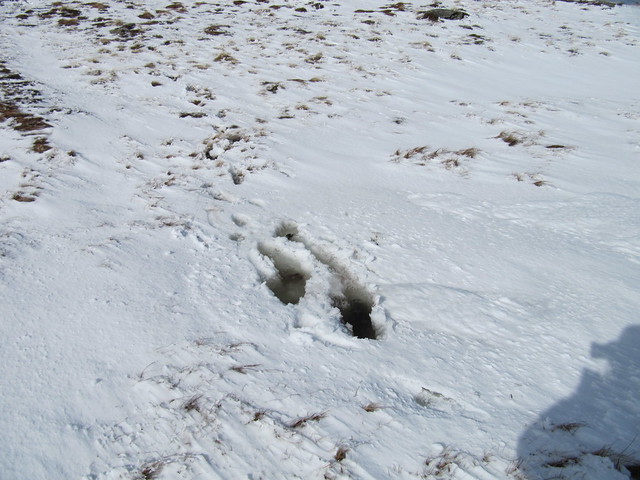 the "lochan" I fell into

The views kept getting better and better, mostly across to Ben Challum, Beinn Dorain, and the Crianlarich hills at this point; however, Ben Lui, Ben Oss, Beinn Dubhcraig, and Beinn Chuirn were now starting to get in on the act. 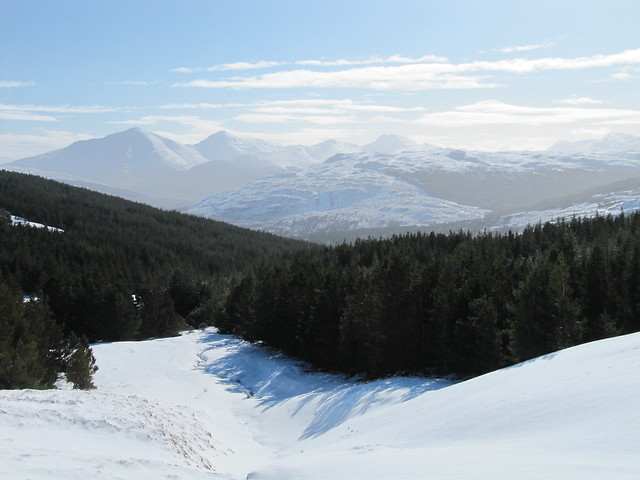 across the forest to the Crianlarich hills

It was another steep pull up to the summit, after a bit of up-and-downing above the forest, but the snow was slightly firmer here, and seemed a lot less work than the initial ascent had been. I took loads and loads of photos. 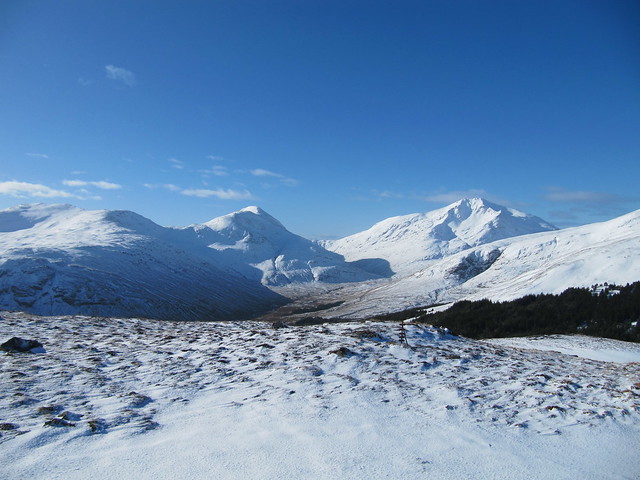 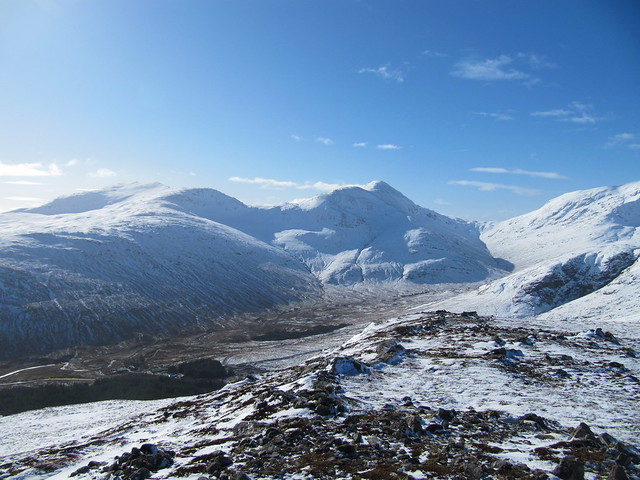 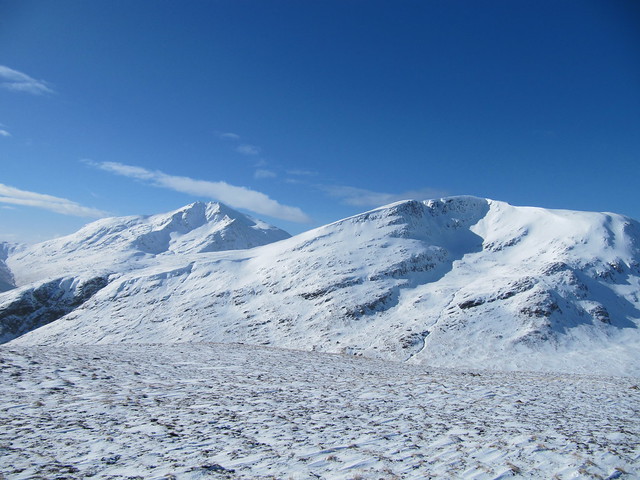 I did contemplate trying to make my way down to Cononish Farm to extend the outing but was once again put off by not knowing a clear route through the forest and/or over deer fences. So I simply retraced my steps (literally) back the way I’d come. The snow that had been crisp in the morning was now soft, slushy, and slippy. 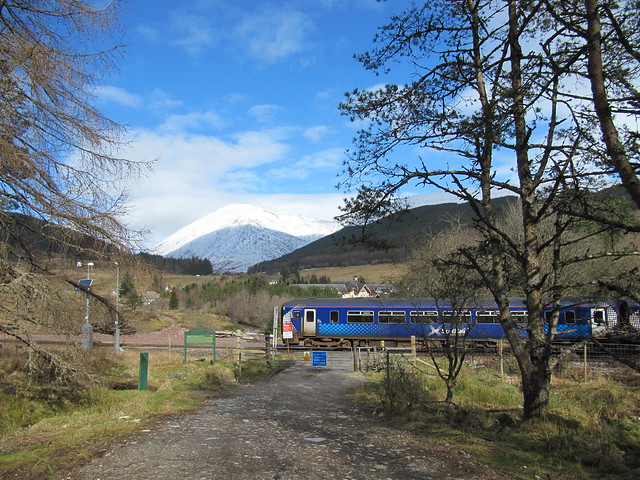 back at the crossing

I returned to the car a bit before 1pm. It was still early, but I felt as though I’d had a good workout, my legs especially. Fiarach gave me a cheeky wink (

) as I drove past, but I didn’t harbour ANY regret at not having a go at it today. I was a happy girl.