So we were off again a short drive to Gilmerton then up to the Foulfoot Inn and a parking space just beyond. No lead to day so I had to keep him close by along the road, think he forgot it! The walk started up part of one of Wade's roads up to Connachan Lodge and NE through a sheep fold and onto the shoulder of The Scurran. Rough ground all the way, bog and heather eventually being replaced by snow, firm in places making the going good.

There was a fair bit of wildlife out today, the big white bum'ed rabbit things and the white rabbits and several red kites worrying the grouse and partridge who were reluctant to fly in the circumstances.

Further up the clag closed in and I had to keep him close by as he kept wandering off to look and the numerous bumps before the little cairn of Gualini na Faing was reached . More rough ground including some peat hags lined with firm snow and then Tom's Cairn, an ancient pile of stones with its two adjacent cairns The nature of the day changed somewhat here, very much whiter and cooler in the wind. The old man had the map and compass out a fair bit and we continued North to find the top of the Scurran and the start of the fun!

We headed off to the West down some very snowy slopes and found ourselves at the edge of a crag. I think he had taken a bearing to hit the edge of it so we could then descend from a know place. Trouble was things didn't look at all right! He was dithering around with that map and compass, checking and rechecking and finally decided to go for it and down we went, very steeply on some frozen snowy ground and then we climbed up the other side again very steeply on snow. We found ourselves on a pronounced ridge (the vis was less than 50m), now that didn't sound right at all, so he had the map out again! Well to cut a long story short, we had descended into a small perfectly formed ravine at the head of the crag which you can find with careful examination of the map, but you do have to look. So once again we descended on a bearing and then the delightful ascent up onto Meall Tarsuinn on perfectly firm snow.

Still on a bearing we found the top had a biscuit and then headed down towards the Fendoch burn track. 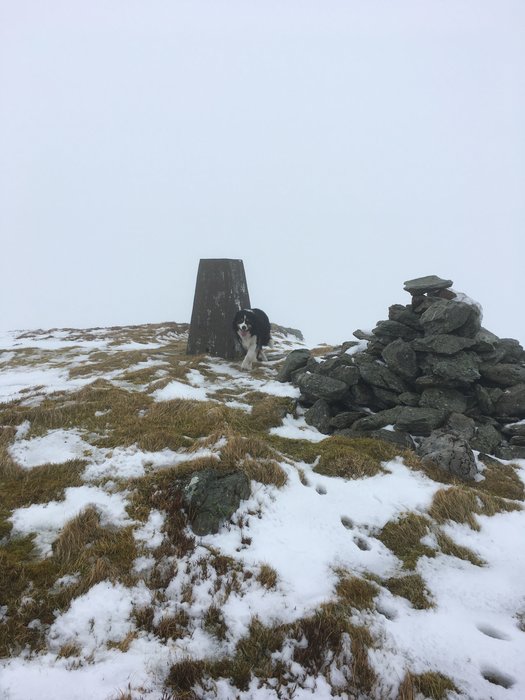 Reached the burn and crossed it , well he fell in! Then sat and shared a sandwich beforewalking back to the car via a couple of the cup marked boulders around Connachan lodge and quick paddle and a chance to watch a shepherd moving some sheep, very instructive it was too. Good winters day out today.