Early mist changed to clear sunny weather then the clouds came down and wind became gusty and strong on the summit plateau. Rain lashed down on the latter part of the descent.
I planned to do the full route as on WH including Curleywee but didn't quite manage due to a number of reasons.
I set off early along the track across the bridge at the rear of the carpark. Finding the route at the start was tricky. I followed instructions but turned off left too early before Caldons House. I rejoined the Souhern Upland Way and the going was so good that I had walked over a kilometre before I checked my map. I returned to Caldons and entered the front yard of the house via a gate and walked round to the left through the farmyard, across a stone bridge and through an open gate to a grassy track. I passed the wooden hut but no picnic bench then rounded a wall and met a deer fence, no gate. The forestry has been heavily exploited and there is no longer a recognisable wood here. The path clings to the RHS of the deer fence along the left of the burn, at times quite steep and slippy but I was able to grab the fence to keep balanced. Bracken was fierce! The burn was pretty with fast flowing waterfalls.The path continued like this until the forestry track was reached. I was pleased then to cross the bridge to the right then the path to the left between the trees and the burn.
This part of the walk was the most challenging. The path was faint and frequently disappeared. It was extremely boggy, tussocky and intermittently very steep. A lot of effort was required. It seemed to go on forever. The burn was in spate and looked stunning with many waterfalls and finally a steep sided gorge which was beautiful although the eroded slippy path beside it was not although that was all part of the fun!
Another highlight was the bulldozed forestry track and piles of cut timber which suddenly appeared obliterating the path towards the end of the area of forest. I had to climb over piles of rotting timber and cut roots and branches to gain the track area then descend to cross a burn where someone had helpfully tied a length of white cloth to a nearby tree to indicate the best place to cross and the start of the path on the opposite side.
Shortly after this I met the fence and wall which I climbed then tried and failed to cross the burn which was deep and frothy. After several attempts I took off my boots and waded across further up then climbed the bank to join the wall which was to lead to the summit of Lamachan Hill. I looked for the path on the far side. Again this was faint and frequently disappeared. However I made relatively good progress and after one more easier burn crossing I reached the summit cairn and shelter. The wind had picked up and it was very raw. Larg Hill looked inviting as did Curleywee but the weather was turning, clouds were gathering and the wind gusts were significant. I was also unsure of the forward terrain and felt that despite the challenges of the ascent that it would be better for me to retrace my steps and plan to visit the area again to achieve the other hills.
The descent was indeed difficult, probably worse than the ascent due to the rain and deteriorating conditions. However the sense of wildness and total solitude more than made up for any issues.
All in all a fantastic day. 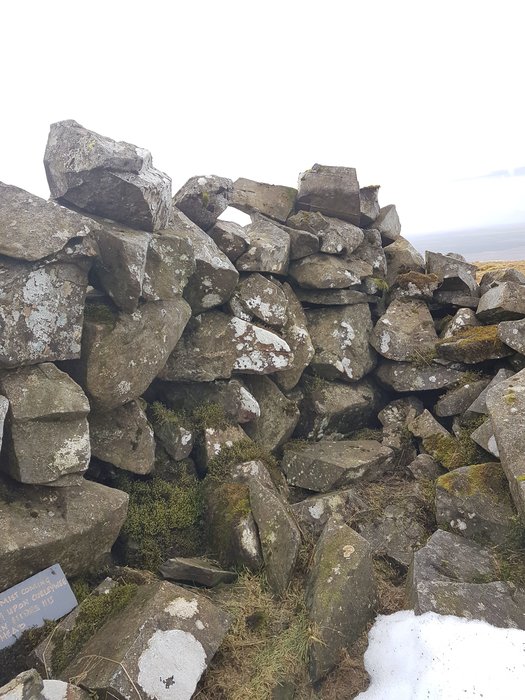 Shelter cairn with message on a slate.