Coyles of Muick and Linn of Muick

Coyles of Muick and Linn of Muick

New sub-2000 Marilyn for us today! Saw a route up this one on Viewranger, but didn't follow that route instead read up on previous walk reports and came across one which visited the falls at the Linn of Muick so decided to do a circuit taking in both. There was parking for several cars on both sides of the road on the B976 near Loch Ullachie (can't be seen from the road) and a gate leads onto a forestry track which heads through the forest. It isn't too long before the track leads to the open moorland, a clear path following the line of the trees towards Meall Dubh but Lochnagar in the distance was what really caught my eye! Eventually the Coyles of Muick appear behind Meall Dubh. The route gets a bit boggier around and after Meall Dubh but nothing too difficult to the base of the Coyles of Muick. A path leads up to a spot between the two summits. Seems to be debatable which is the highest, so we visited them both! The smaller cairn certainly seemed to have the better views looking straight across to Lochnagar, with views down to Ballater from the larger cairn at the other summit. Having visited both summit we returned to where the path split between the two summits but instead of heading down the way we came we found a faint track that took us down the opposite side and round the base of the hill. Here it was a case of trying to find the best way down to the forestry track. A cleared area provided the way down, the track we wanted to be on clear to see. Most of the felled trees had been removed making the going easier, though it did get boggy in places. On the forestry track it was then an uneventful walk through the forest. There has been some work going on in the forest so there were a few new tracks but we zig-zagged our way down to the long track that would take us down to the Linn of Muick. There are hydro works going on here, but all was quiet today and we headed along to see the falls and the salmon ladder. Heading back, we remained on the track that ran near the river, though the river was out of sight for most of the way, passed the hut and car parking for the hydroscheme and along eventually reaching a tarmacked road. Rather than staying on the surprisingly busy road, we cut back into the forest for the last stretch. The gate into the forest was locked but there was a gap and path just a bit further along that led up to the track and from there we walked through the forest and had just a short walk along the road back to the car. Looking back to the forest we had just emerged from Zoomed in on Lochnagar 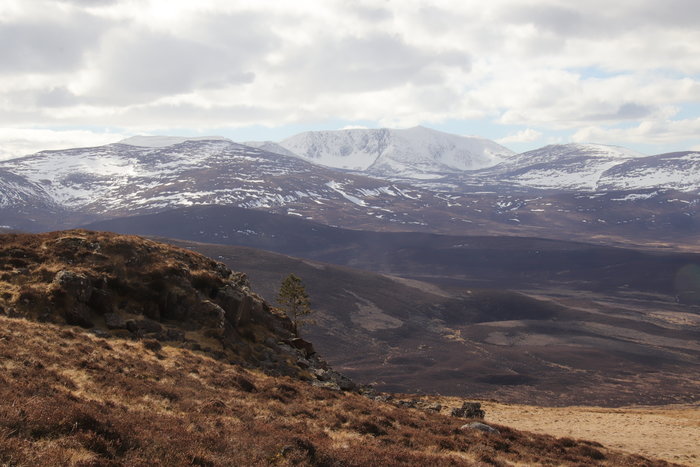 Another one of Lochnagar Path to Coyles of Muick Moss at the smaller summit cairn Zena happy to find a patch of snow! 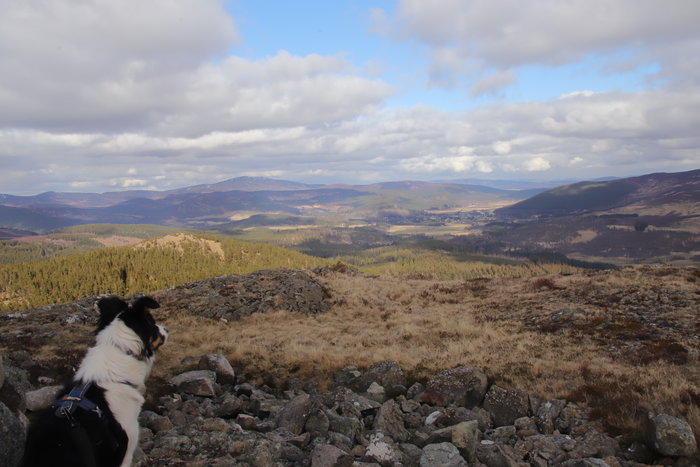 Zena enjoying the view towards Ballater Searching for a way down! The falls and the salmon ladder