our_route.gpx Open full screen  NB: Walkhighlands is not responsible for the accuracy of gpx files in users posts
Lovely sunny day, parked at the end of the potholed single track road at Eileanach Lodge. Walked through the white gates and over the bridge, then at the cross roads of tracks shortly after, turned right. Followed that track to near the outlet of the reservoir (Loch Glass), then took the branch right to cross the outlet and headed NW along the track on the other side. Took the branching track to the right up through the forestry area, then emerged from the plantation with the wind turbines quite close by. Headed along and up the track a bit more towards the north western wind turbines, then just struck out towards Meall Mor across the clumpy heather. The kilometre or two to the final hill wasn't overly enjoyable as there was a lot of zig zagging to negotiate the big peat hags. It was a relief to get to the final slope up, that section covered in snow which was good to walk on. The summit trig point is just a short distance from where the better views are at the west end of the summit area - fantastic views over Loch Glass to the lesser-seen side of Ben Wyvis, still snow covered. The Beinn Dearg group in the distance to the west. Emerging from the forestry track to beautiful views of Ben Wyvis Left the track around here, near the wind turbines, to strike off across the heather 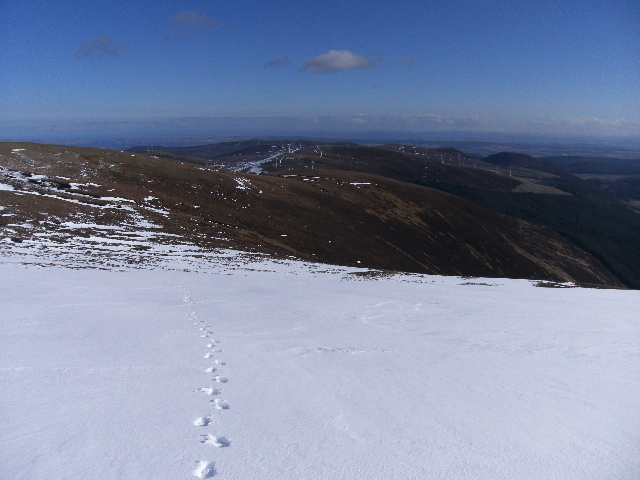 On the last bit of ascent up to the summit, a look back to the route taken so far Pano of Ben Wyvis, the Beinn Dearg group is in the distance on the right of this shot Nice view of Ben Wyvis from this side, I've only been up it from the usual path on the other side For the return route, I stayed far right to avoid the hags. It meant I was walking across steeper hillside, but preferable to the detouring and zig zagging. I joined the other track on the edge of the forestry plantation heading down outside the trees, before then turning back along the lochside through the bottom of the forest (a very wet route) and back to the reservoir outlet from where I took the same route back to the car.

A good hill for social distancing, no-one else up there today anyway, and done just before MRT told us not to go to hills....

Think it’s a very under-rated hill. The summit is fabulous. I did this and had it all ri myself.