I first did this wee hill near Crieff in May 2011 with my wife, 9 week old daughter Ailsa and our dog Lucy. Things have changed a bit since then. Ailsa is now 9 and turning into a proper young woman, we have been without Lucy for over 2 years and we have a new Labrador now, 4 month old Luna, short for Lunatic.Oh, and the world is going into lockdown and meltdown in seemingly equal measure in the midst of the COVID-19 pandemic. Changed times indeed.

Back on that day in May 2011, Debbie was still recovering from the traumatic and life threatening aftermath of delivering Ailsa and it was Ailsa's first hill. She even had her nappy changed at the summit as Lucy looked on and reflected on how this was something she was not in the habit of observing at summit trig points! Today it was just Ailsa and I, Lucy now being a permanent feature at the summit of nearby Ben Vorlich and Debbie being away for a socially distant walk with her mum near Bridge of Allan to mark Mothering Sunday.

Luna is still too young for a walk of this distance and duration so after taking her out for a short circuit round the lane, Ailsa and I had lunch then headed down to Auchterarder to deliver some supplies to my self-isolating parents before continuing over through Muthill and round to the start of the walk at Balloch Cottage.

Given the fine spring weather, the growing restrictions on our lives and the fact that much had been said in the media over the previous few days about the need to get out for exercise in the face of what was effectively house arrest, I had expected to see a few cars parked up by the gate at the end of the forestry track. As it turned out, there was only one other car but no sign of the occupant or occupants. I had spent some of the drive thinking about which Munros or Corbetts I might be able to target over the coming weeks if the good weather kept up. Although school is now out, a holiday it is not going to be, but the scheduled Easter fortnight is only 2 weeks away. It is an indicator of just how fast things are moving in this crisis, that little did I know that within just over 24 hours we were going to be in almost total lockdown and facing the prospect of being fined for going out for anything other than life critical reasons. I'm not sure that the "one bit of exercise a day" thing could be stretched as far as to mean an overnighter to Mullardoch!

We quickly got our walking boots on and headed through the gate - Ailsa's first opportunity to pose for some "now" photos which she couldn't wait to compare to the "then" photos when we got back home. 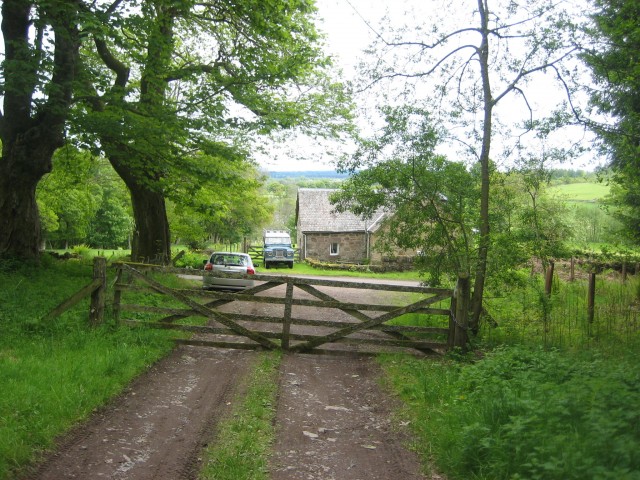 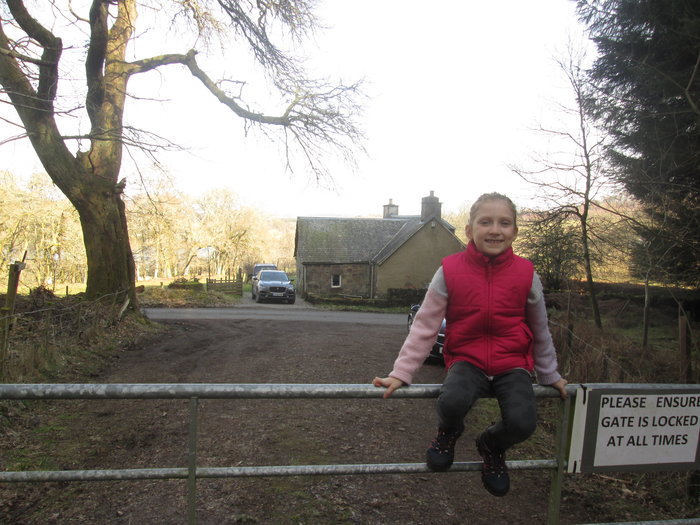 Upgraded to a new metal version in 2020 - much better for climbing on! 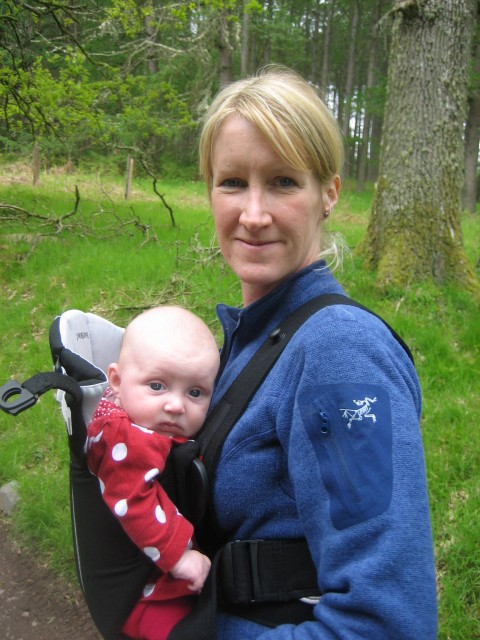 Personal mountain sherpa service in 2011 - those days are long gone!

I knew she would be enchanted with the piece of forest furniture just round the corner at the first junction, and true enough, she insisted on another photo opportunity! 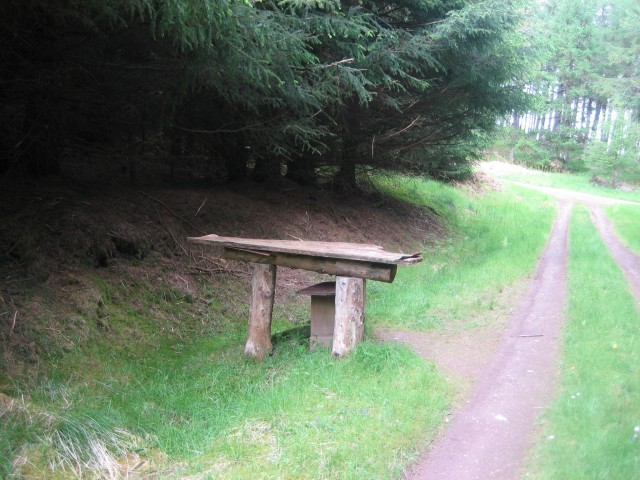 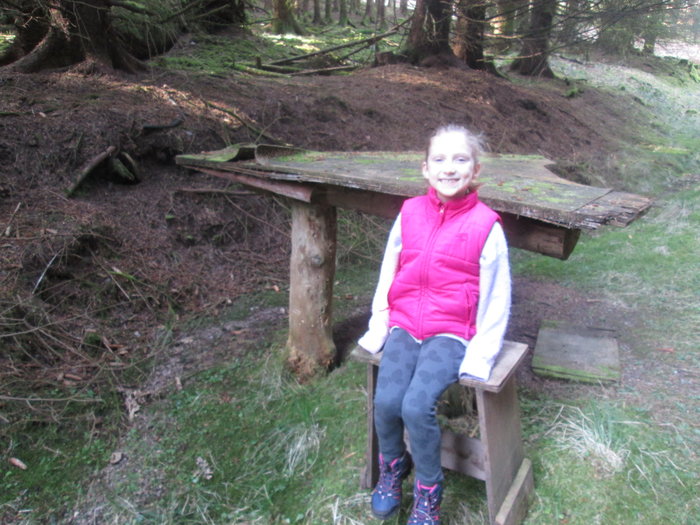 9 more years of withstanding the elements

The track twists and dips a little before the next junction where a right turn leads to a big long steady climb up the straight track to the first of two gates through deer fences. 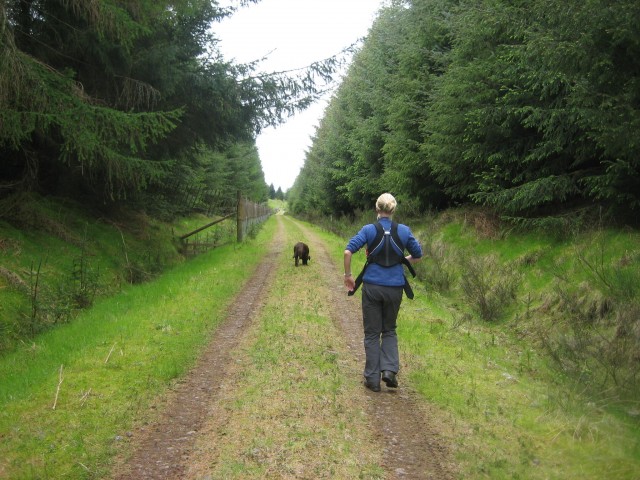 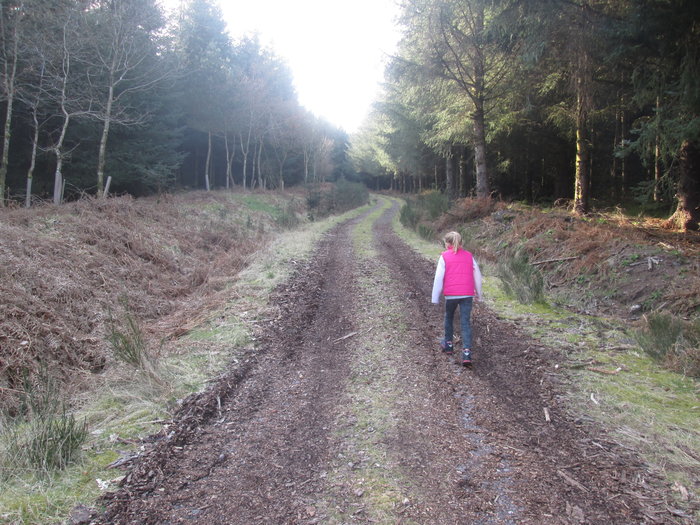 2020 - making her own way up the long steady climb

We passed a dead hare in the ditch on the right hand side of the track, pretty freshly dead by the looks of it. Had we been much further into the current Corona madness, I might have been tempted to take it home for the stock pot!

We soon reached the first gate where we had lunch 9 years ago. No lunch today - just a Cadbury's creme egg for Ailsa and a cereal bar for me. 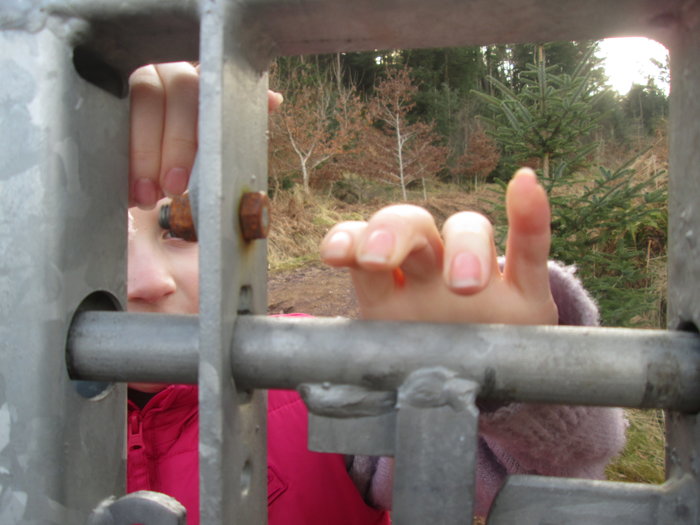 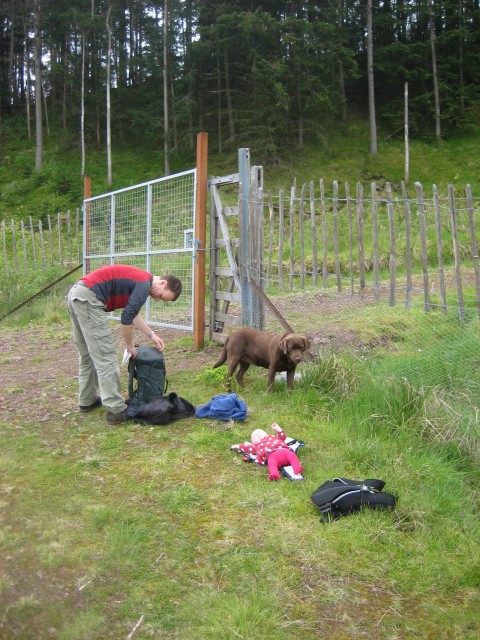 Time for a creme egg - one of the few things you can still find in the shops these days!

Up to this point, the walk is a pretty tedious plod up a track through pretty dense spruce plantation, but beyond the first gate, the trees thin, spruce giving way to a more mixed woodland. 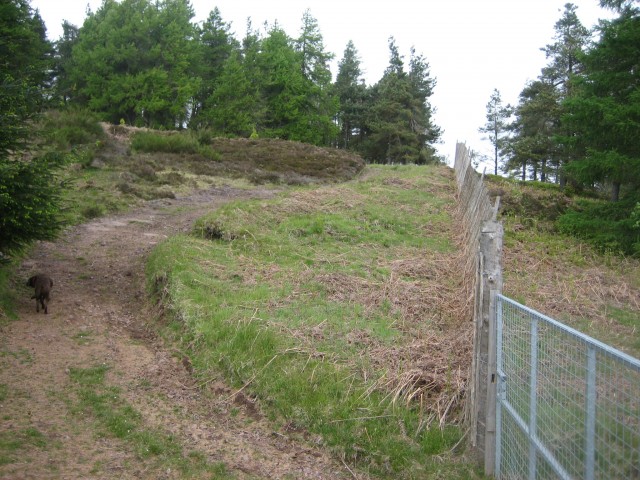 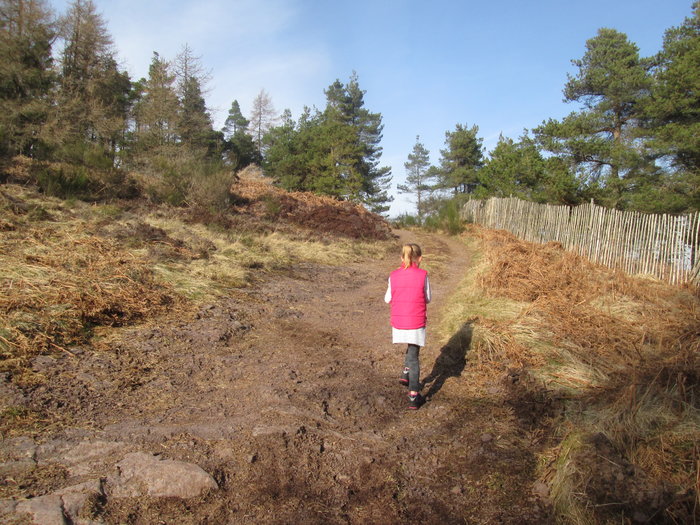 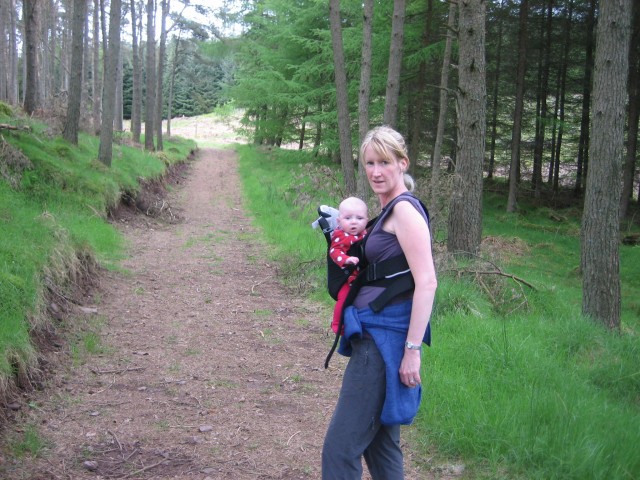 Back in 2011, this section reminded me of the upper reaches of Moncreiffe Hill on ascent from the Tay side 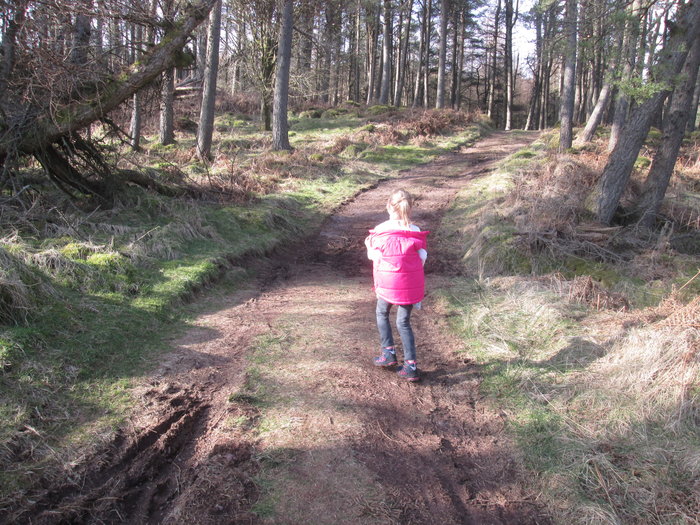 It still does today

After a wee while a steep grassy path branches left off the track for the final pull up to the summit trig point with fine views across Strathearn and north towards the bigger hills of the southern Highlands. After a short stop for a bit of tree climbing, we soon topped out and engaged in a bit of predictable trig point jumping! 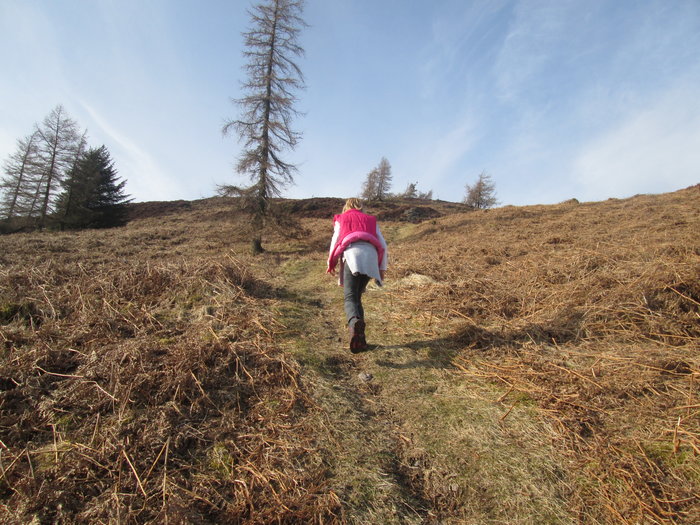 Into the open for the final section of ascent Me with a tree growing out of the top of my heid! 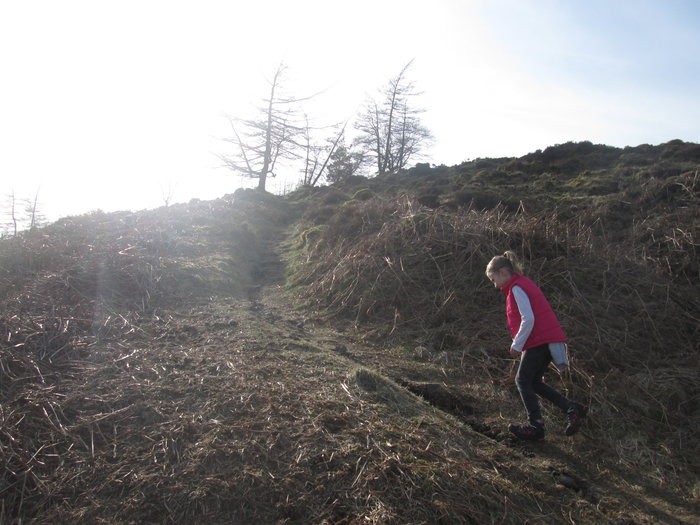 North towards the Glen Turret hills on the brink of lockdown 9 years on - from nappy change to trig climbing Dad and daughter at the top of Torlum in 2011 Dad and daughter at the top of Torlum in 2020

9 years ago we stopped off at the Glover's Arms at Huntingtower on the way home. No such stop this time. It was straight home to prepare for a new world of working and schooling from home, pub closures and imminent lockdown.

I know not when my (or Ailsa's!) next hill day will be but I sincerely hope my current 2020 total of one new Corbett and a repeat of Torlum is not the end of the story for the year!

Stay safe folks, look after yourselves and your families and enjoy what little local walking you can reasonably manage over the coming weeks. Let's hope we can all be out on the bigger routes again soon!

Re: Torlum and a lockdown memory lane