Looking to Ben Wyvis from the summit. Time around 6pm.


our_route.gpx Open full screen  NB: Walkhighlands is not responsible for the accuracy of gpx files in users posts
An overnight stay for a job at Culbo in the Black Isle offered the chance of a flying trip into the mountains. With the Coronvirus pandemic dominating the headlines, little did I know a nationwide lock-down would effectively close the hills for exploration only a few days later. I departed Deeside on a fine Thursday morning, leaving behind my wife home-schooling the kids, the previous day being marked by the announcement of all schools closing. My "office" for the day offered a tantalising view beyond the Firth of Cromarty to Ben Wyvis, plastered white after a snowy March had rescued a mild winter. View across to Ben Wyvis from my "office" for the morning.

At 3.30 pm I decided enough work for the day, packed up the van, and set off in the direction of Wyvis. With sunset at 6.30 pm, 2 hours daylight would have been pushing my luck so I diverted my attention to Carn Chuinneag. The Hill of the Churn was a twin-topped Corbett I’d often noticed prominent in views across the Moray Firth from Lossiemouth.

I took the road from Alness over the hills to Ardgay, turning off along the attractive Strathcarron, before parking up in sight of the bridge over the River Alladale. Just before 4.30pm, I jumped on the bike and headed southwards, passing some interesting buildings that comprise Glencalvie Lodge. Hamish Brown mentions in Climbing The Corbetts how the ordinary people of Glencalvie were treated appallingly during the clearances of 1845, the evictees scratching messages onto the windows of near-by Croick Church that remain to this day. 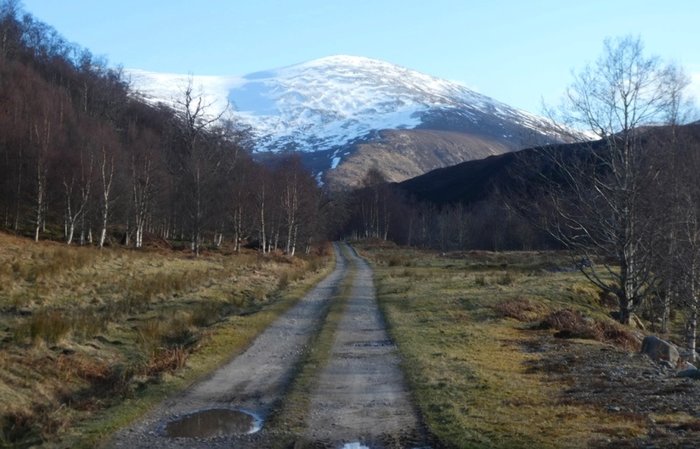 Approaching Carn Chuinneag from the north along the glen.

The 3 mile cycle along the gravel track – bemusingly littered with potatoes in places – was straightforward and pleasant alongside the Water of Glencalvie, the pools and riffles glinting where they caught the evening sunshine. The domed west-top of Carn Chuinneag loomed ahead of me, the summit snows pleasingly sunlit. My approach road served a large residence called Diebidale, occupying a striking position on a prominence above the glen. 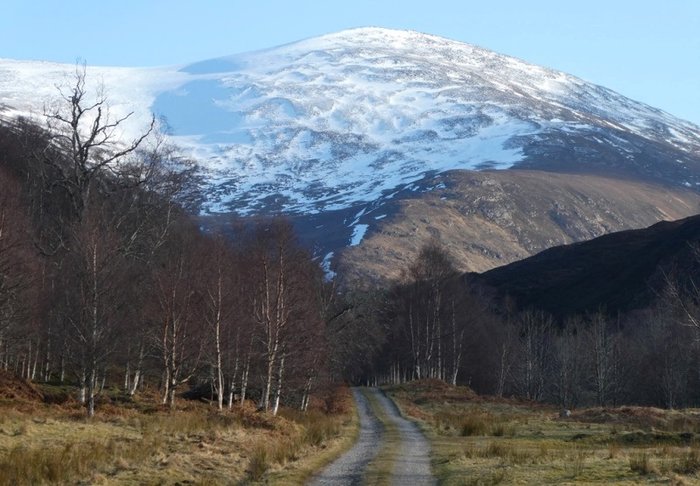 My route followed the steep nose in the centre of the picture up to the west top. The true summit is hidden to the left. 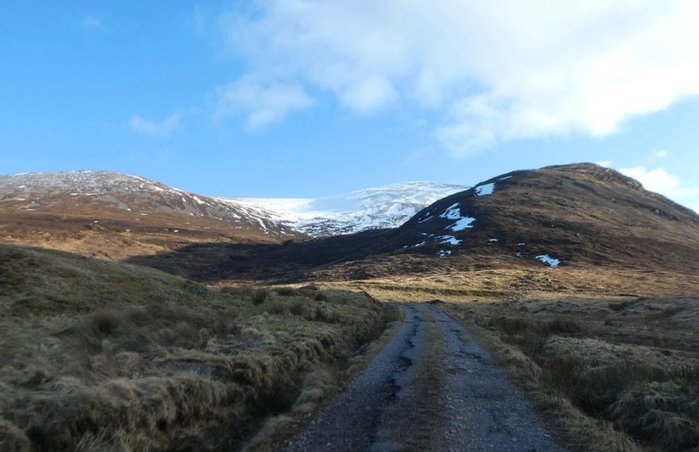 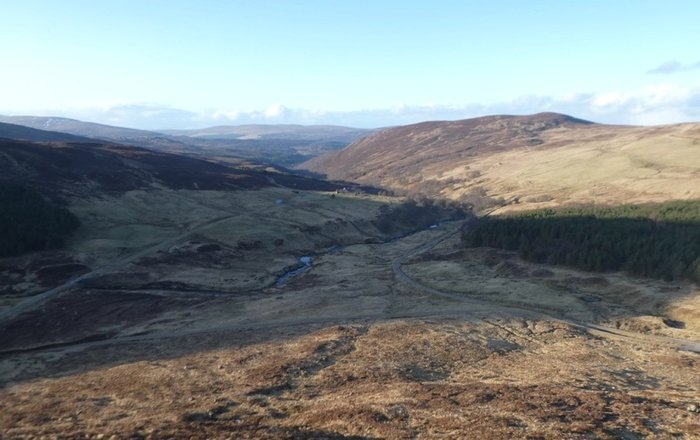 Looking back into the glen along the approach track.

3 miles cycling had taken me direct to the foot of the hill, and a direct assault of the nose of A’Chioch – a modest ridge in comparison to some of its namesakes - now stood in front me. A thin ribbon of cloud muted the evening sunshine but the skies overhead were clear blue. When the gradient eased I moved from heather and moss onto a clear stalker’s path, but boulder fields offered a firmer footing than the snow-filled track. After filming two ptarmigan trotting across the hill, I kicked my boot soles into icy snow to reach the west top with the sun on my back at 6pm. 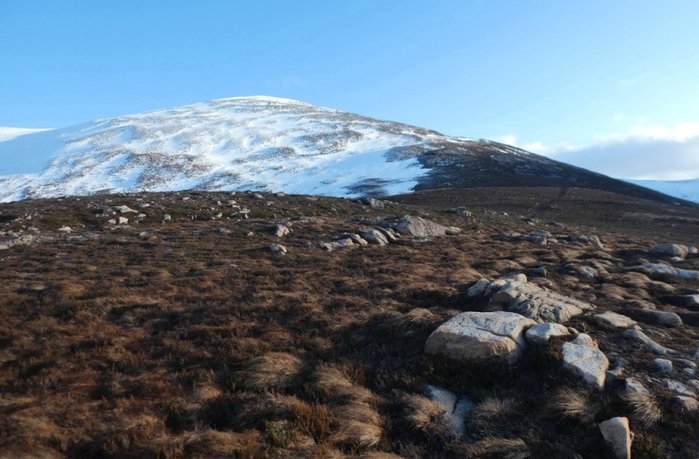 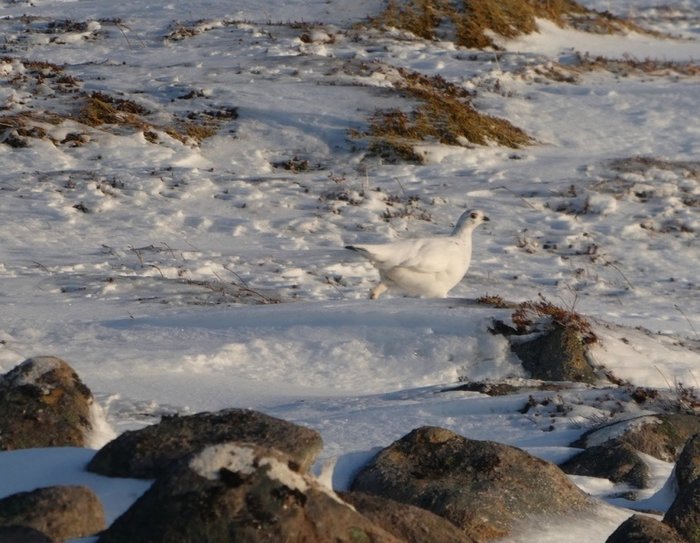 It would have been a fine place to dwell and enjoy the setting sun, but the principal summit lay half a mile to the east. I dropped into the shade to gallop across a snowfield and was delighted to reach the cairn and trig point in time to enjoy the last of the diminishing sunshine. The views to the pink-tinted, snow-covered whaleback ridges of Ben Wyvis were undoubtedly the star attraction. Looking to the true summit of Carn Chuinneag from the west top. 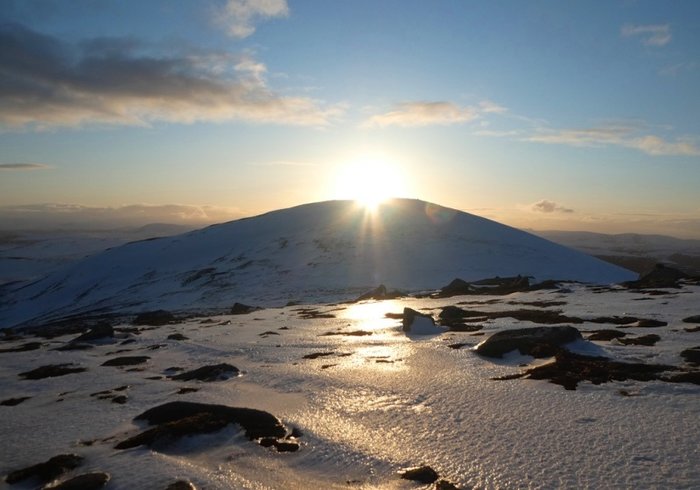 Looking back to the west top. 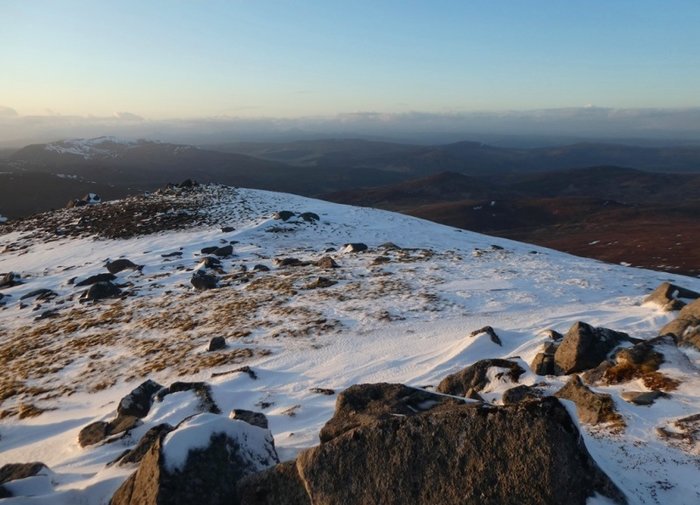 With fingers freezing from operating my camera in the bitter summit breeze, I set off homewards just before the sun dipped below the peaks of the Beinn Dearg range. The snow was firm but still allowed a rapid descent onto the mossy heather below, and in only 24 minutes I was back at the bike. 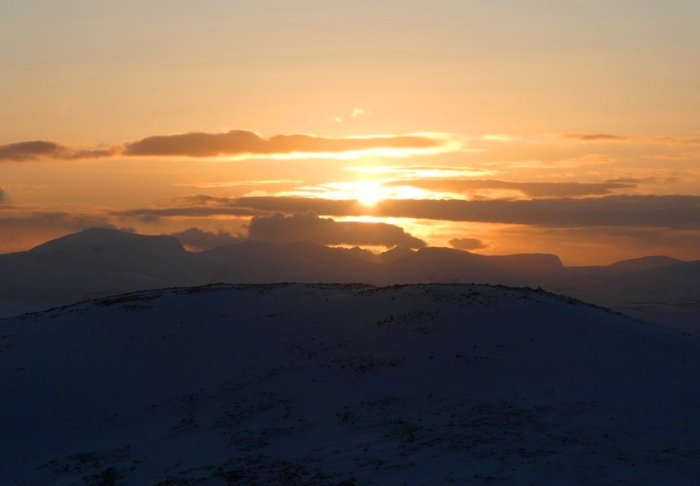 The sun setting over the Beinn Dearg range

It would soon be 7pm and I was eager my cycling descent wouldn't be slowed by the light of a head torch, so I wasted no time flying down the glen in the twilight. Deer feeding on the potatoes along the track – I knew there must have been an explanation – dashed off in all directions and a herd of sheep were startled as I burst through an open gate. 14 minutes cycling at a 13 mph average – top speed 25 mph – and I was back at the van. An hour’s drive took me to Inverness and my accommodation for the night at the Inshes Retail Park Premier Inn. A good meal was enjoyed at the Brewers Fayre, albeit in a peculiar atmosphere given it was closing indefinitely the following day, due of course to the lengthening shadow cast by the Coronavirus. 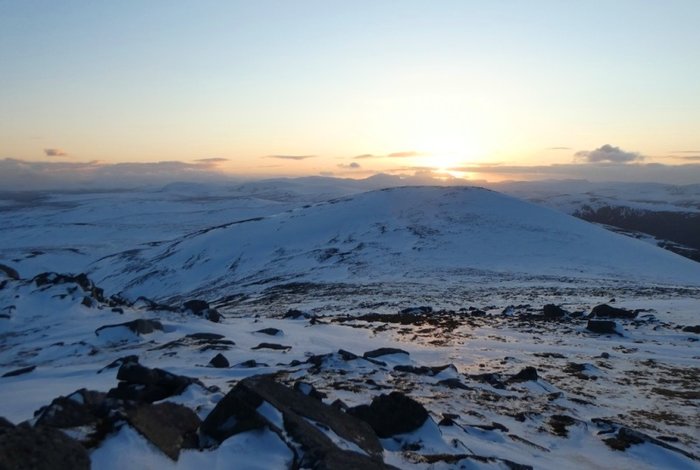 That brought back happy memories of climbing it in more normal times but I think you need to amend your stats at the start. Distance 5km and time 2.5 hours?

The walk date is wrong as well.

Nice walk though - I did it myself a few years ago, later in the spring (without the aid of a bike): there were still a few patches of snow, and I saw a ptarmigan with its chick.

Now I've read it rather than just looked at the photos I realise you used a bike which explains the 2.5 hours. Fair enough.

Lovely! The memory of that view should help keep you going through this lock-down period!

Mal Grey wrote:Lovely! The memory of that view should help keep you going through this lock-down period!

Thanks for the posters above noting the couple of errors - now corrected! Glad I sorted the date, didn't want to be on the post-lockdown naughty step

Happily I was up at 5am the next morning to squeeze in another walk up Ben Wyvis, in even better weather, and I haven't even started writing that one up yet! No point rushing...